My wife and I recently traveled to Bosnia and Herzegovina to attend a screening of one of my films at the Jahorina Film Festival in Sarajevo. Now, I wasn’t really sure what to expect from this mysterious country and “infamous” city but after our week there, I can tell you that this is one of the most beautiful countries I’ve ever been to and Sarajevo is a city that will steal your heart. We stayed in the heart of Sarajevo (Old Town) and spent the better parts of two afternoons walking the streets of the country’s capital city as well as its largest.

Due to its long and rich history of religious and cultural variety, Sarajevo is sometimes called the “Jerusalem of Europe”. It was, until late in the 20th century, the only major European city to have a mosque, Catholic church, Orthodox church and synagogue within the same neighborhood. The city, which dates back to the 15th century, has also attracted international (and infamous) attention.

It was in Sarajevo where the assassination of Archduke Franz Ferdinand of Austria, heir presumptive to the Austro-Hungarian throne, and his wife Sophie, occurred on 28 June 1914, setting off World War I. Sarajevo was the site of the 1984 Winter Olympics, the first Winter Olympics to be held in a Communist state (remember Torvill and Dean?). And it was in Sarajevo where the longest siege of a capital city in the history of modern warfare took place.

In April of 1992, after the Muslims and Croats of Bosnia and Herzegovina had declared independence from Yugoslavia, the city of Sarajevo fell under attack from Bosnian Serb military groups with the backing of the Serb-dominated Yugoslav army, who were against Bosnian independence. The Bosnian Serbs encircled the city and placed Sarajevo’s 500,000 citizens under siege. Sarajevo was bombarded by artillery and snipers picked off residents as they walked in the streets. The Siege of Sarajevo lasted from 5 April 1992 to 29 February 1996 (1,425 days) during the Bosnian War and claimed the lives of almost 14,000 people, including over 5,000 civilians.

Today, Sarajevo is a city on the rebound and on the rise. The travel guide series, Lonely Planet, listed Sarajevo as one of the top ten cities to visit in 2010. In 2015 the Huffington Post named Sarajevo in its list of “10 of the World’s Most Beautiful Cities“. Moreover, in 2015 Bosnia and Herzegovina surpassed 1 million tourist arrivals, an increase of 21.5%.

Sarajevo was indeed a beautiful city to visit. The history, the culture, the great food (get ready for plenty of beef, veal and steak!) and even greater coffee, all without the high costs of those other major European cities. Walking the streets of Old Town with my wife into the evening is something I’ll never forget. The city has come a long way – but you don’t need to look too hard to see its many scars still healing.

As I am wont to do, I brought along my my camera and a few good lenses and snapped several photographs as we walked around Sarajevo. Special thanks to our tour guide Ahmed Lavić of ToursbyLocals.com for helping us get around to all the interesting sites around town (and serving as my unwitting production assistant). We stayed at the lovely Old Town Hotel in Sarajevo and despite not having an elevator, we enjoyed our time there – not to mention the stunning views of Old Town from our room.

Let’s start in Sarajevo’s Old Town, shall we?

The Sacred Heart Cathedral (Katedrala Presvetog Srca Isusova), commonly referred as the Sarajevo Cathedral, was built in 1889 in the Neo-Gothic style by Josip Vancaš, a Hungarian architect. There is also a statue in front in honor of Pope John Paul II, who visited Sarajevo in 1997, soon after the war had ended.

Sarajevo’s City Hall (also known as Vijecnica), a stately Neo-Moorish edifice which opened in 1896 and was converted to the National Library in 1949, has been restored to its old glory after being destroyed by Serb shelling during the siege of the city in 1992… 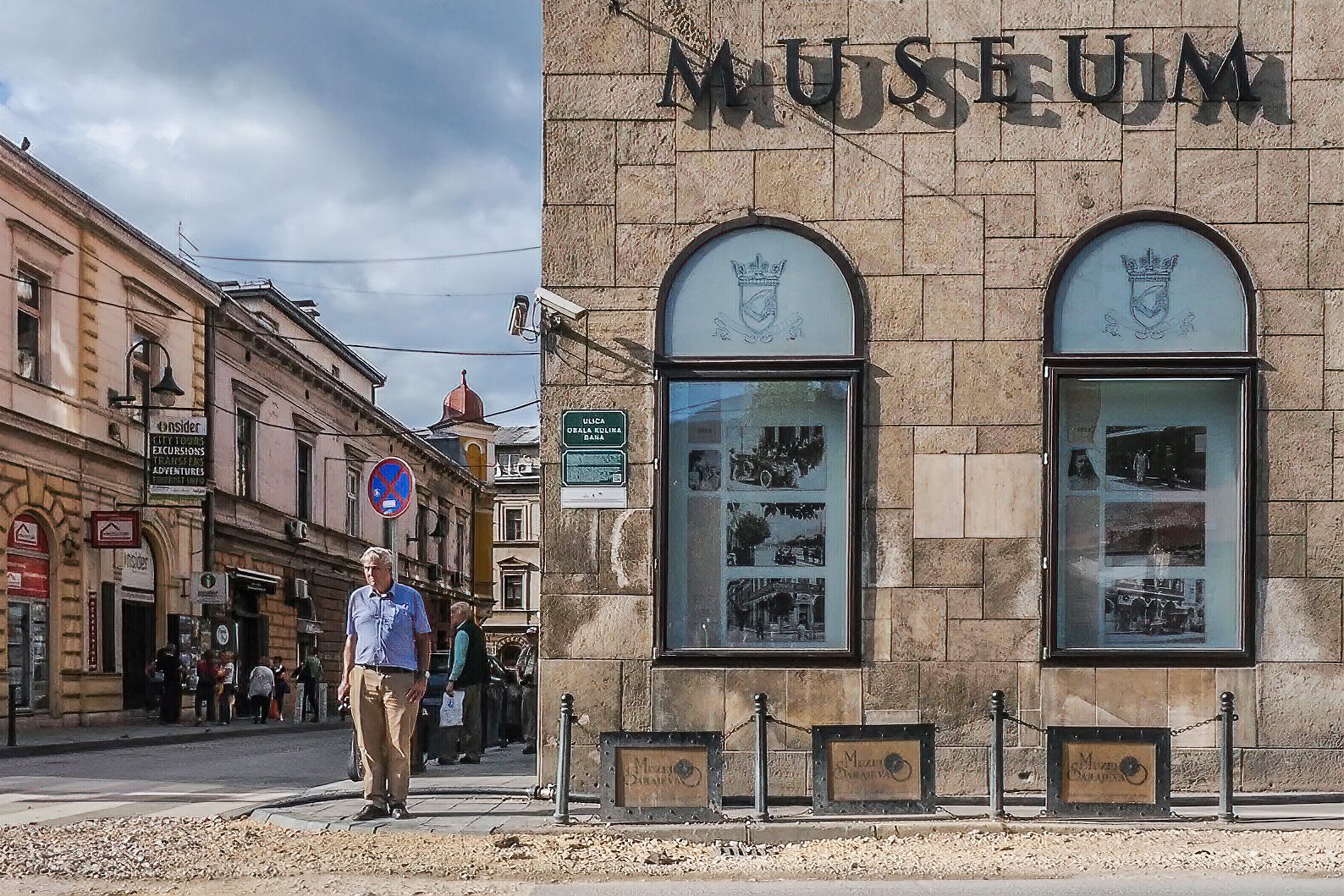 Across the street from the Latin Bridge, a man stands on the corner where 18 year old school boy Gavrilo Princip shot and assassinated Archduke Franz Ferdinand and his wife Sophie as they drove by in their motorcade. They both died seated upright in the car before they could receive medical attention. The assassination of Ferdinand by a Serbian Bosnian underground organization that went by the name “Black Hand”, was supposed to help break Bosnia away from Austria-Hungary and ultimately facilitate a Serbian takeover of the province. Ferdinand was the heir apparent to the Austro-Hungarian Empire. A month later, World War I began. Today, on that very corner stands the Museum of the Assassination of Franz Ferdinand.

The Eternal Flame (Vječna vatra), a memorial to the military and civilian victims of the Second World War in Sarajevo, Bosnia and Herzegovina.

At first glance, Sarajevo’s bustling Markale market (Pijaca Markale) might appear like any other farmer’s market. However, on February 5, 1994, during the siege of Sarajevo, 68 people were killed and another 144 wounded when a shell hit the crowded market. A memorial at the back of the market lists the names of those whose lives were lost in the attack on an encased red wall.

Pigeons don’t go hungry in Baščaršija, Sarajevo’s old bazaar and the historical and cultural center of the city… The healing scars of the city, in the form of facades riddled by artillery fire, are still visible as you walk the streets of Sarajevo…

“Multicultural Man Builds the World”, a sculpture by Italian artist Francesco Perilli, sits in Trg Oslobođenje, or Liberation Square, in the center of Sarajevo. To the right of the sculpture is the Cathedral Church of the Nativity of the Theotokos or the Serbian Orthodox Cathedral, which was erected between 1863 and 1868

Ulica Maršala Tita (Marshal Tito Street) is one of main streets in Sarajevo. It is named after Josip Broz Tito, former President of the Socialist Federal Republic of Yugoslavia

From the hotel window of our room at the Hotel Old Town, you can see (on the left) the Old Clock Tower which dates back to the 17th century and is believed to be the only clock tower in the world that keeps lunar time making it always seem like it’s broken. The clock marks time based on the movement of the sun and moon so that the locals can time their prayers, thus the clock strikes midnight around sunset. On the right is the Gazi Husrev-bey Mosque which was built in 16th century and is the largest historical mosque in Bosnia and Herzegovina… In 1885, Sarajevo was the first city in Europe and the second city in the world to have a full-time electric tram network running through the city, following San Francisco. Today, the Sarajevo tram system consists of seven lines, primarily running along a single track route running 14.2 miles long. 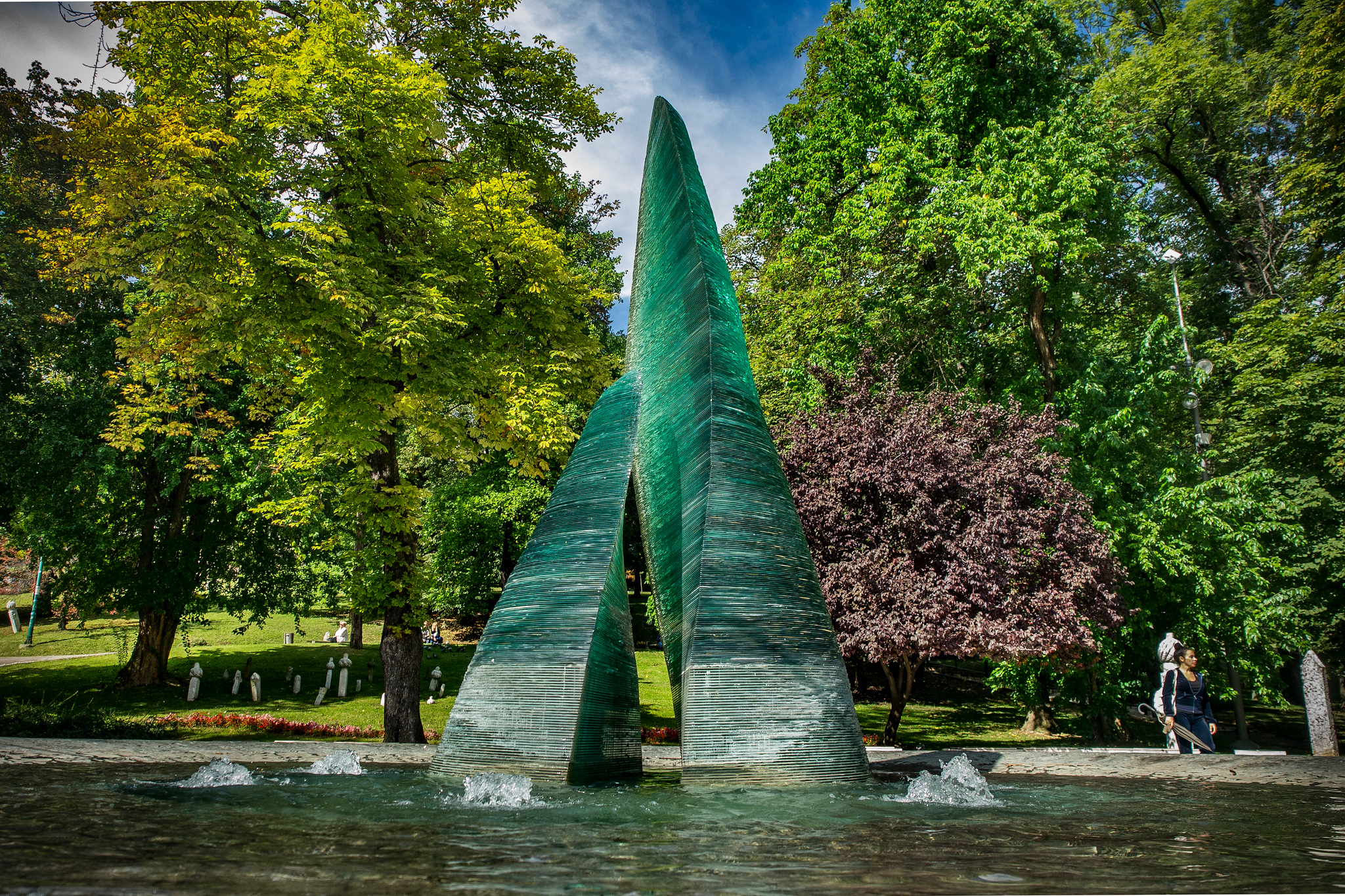 The Siege of Sarajevo claimed the lives of almost 14,000 people, including over 5,000 civilians. Over 1500 of them were children. In Sarajevo’s Veliki Park (Great Park), you’ll find the Memorial to Children Killed in the Siege of Sarajevo by Bosnian artist Mensud Kečo. The memorial was unveiled in 2009 and another memorial, made up of small columns, includes the names of 521 children killed during the siege. About 800 more names are expected to be engraved after all relevant information and documents are gathered and their identities verified. 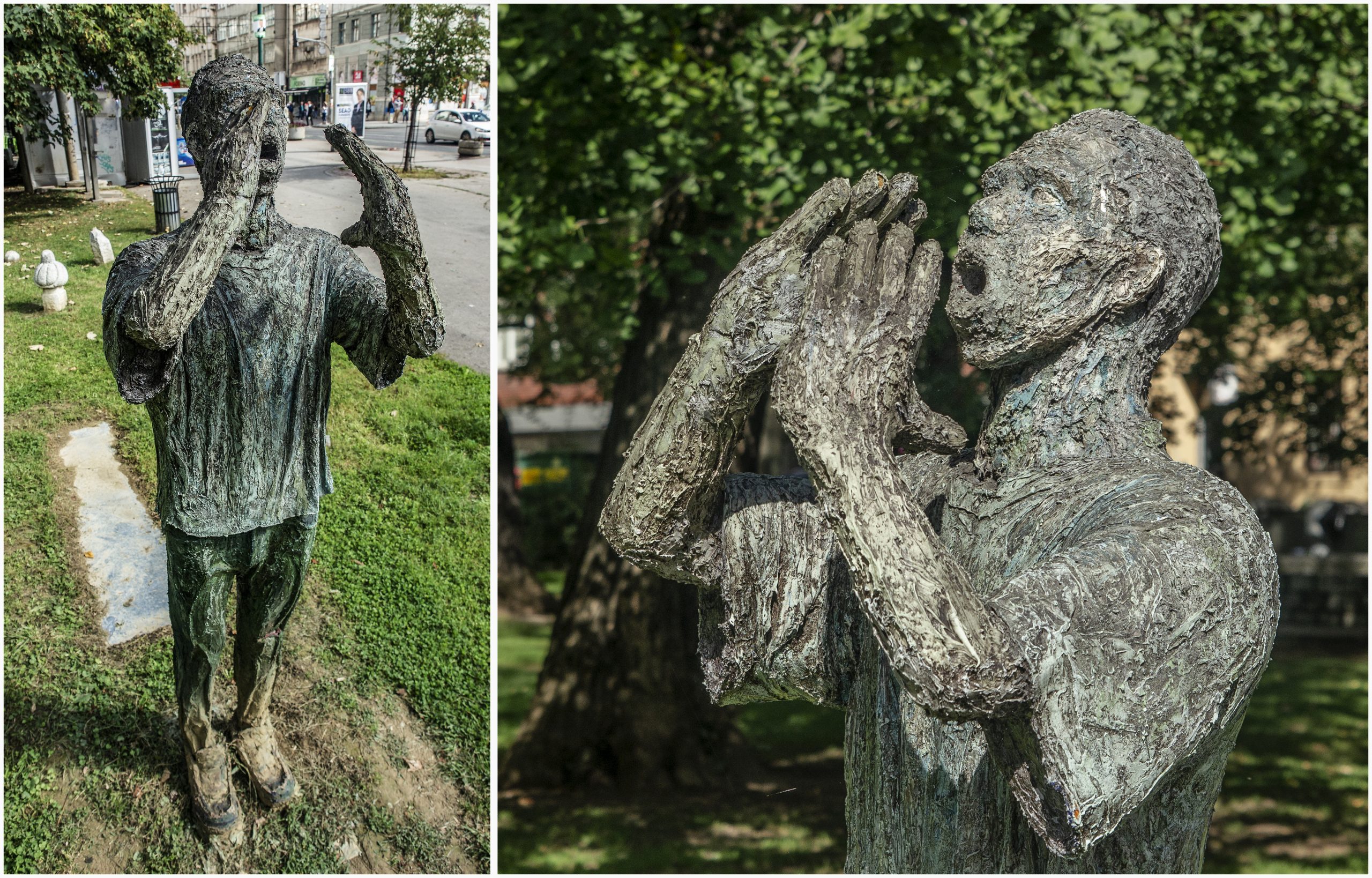 In Sarajevo’s Great Park stands a monument called “Nermine, dođi” (“Nermin, come on”). The sculpture, also by Bosnian artist Mensud Kečo, shows Ramo Osmanović who was ordered by Serbian officers to call out to his son Nermin to come out of hiding in a nearby forest in Srebrenica (at the 9:23 mark in this video, you can actually watch footage of Osmanović calling out to his son). Osmanović thought his son might have a slim chance of being spared if he surrendered. However, the remains of Osmanović and his son Nermin were found in 2008 in a mass grave not far from Srebrenica, a town in eastern Bosnia and Herzegovina where in July of 1995, more than 8,000 Bosniak (Bosnian Muslim) boys and men were slain by Bosnian Serb forces. Moreover, thousands of women, children and elderly people were forcibly deported and a large number of women were raped. It was the greatest atrocity on European soil since the Second World War.

Mrs. Perez and I enjoying Baščaršija

Sarajevo is a city to put on your official travel bucket list – not to mention the country of Bosnia and Herzegovina, it’s beautiful.

Written By DanPerezPhotography On October 2, 2016