The Historic City of Antigua, Guatemala

Earlier this month, I traveled to Guatemala with my teenage daughter to attend the Giant Kite Festival in Sumpango during Día de los Muertos (Day of the Dead) on November 1 (you can watch the spectacular video HERE). Just under a three hour flight from Fort Lauderdale and bordered by Mexico to the north and west, the territory of modern Guatemala once formed the core of the Maya civilization, which lasted until the mysterious collapse of the civilization around 900 AD. The first evidence of human habitation in Guatemala actually dates back to 12,000 BC(!).

The land was conquered by the Spanish in the 16th century and since then has endured destructive floods and earthquakes, volcanic mudflows (Guatemala has 37 volcanoes, four of which are still active!), a series of dictators, a decade-long revolution, a military coup, a bloody civil war and political scandals as recent as 2015 when President Otto Pérez Molina resigned due to a corruption scandal.

Guatemala, however, is rich in natural, historical and cultural appeal – not to mention its charming Spanish Baroque-influenced architecture. And despite Guatemala’s bloody past, the people here will warm your heart. People walked past us on the street with a smile and a “¡Buen día!” wherever we went. And it all started when we arrived in Antigua, once the capital of Guatemala and a UNESCO World Heritage Site (a landmark which has been officially recognized by the United Nations which are are legally protected by international treaties).

We stood right near the center of town at the the lovely Los Olivos Boutique Hotel and Restaurant and spent the better parts of two afternoons walking around this charming city with my Lumix GH4 and an array of lenses. So enjoy the photographs and put Antigua on your list of places to visit before you kick the bucket. 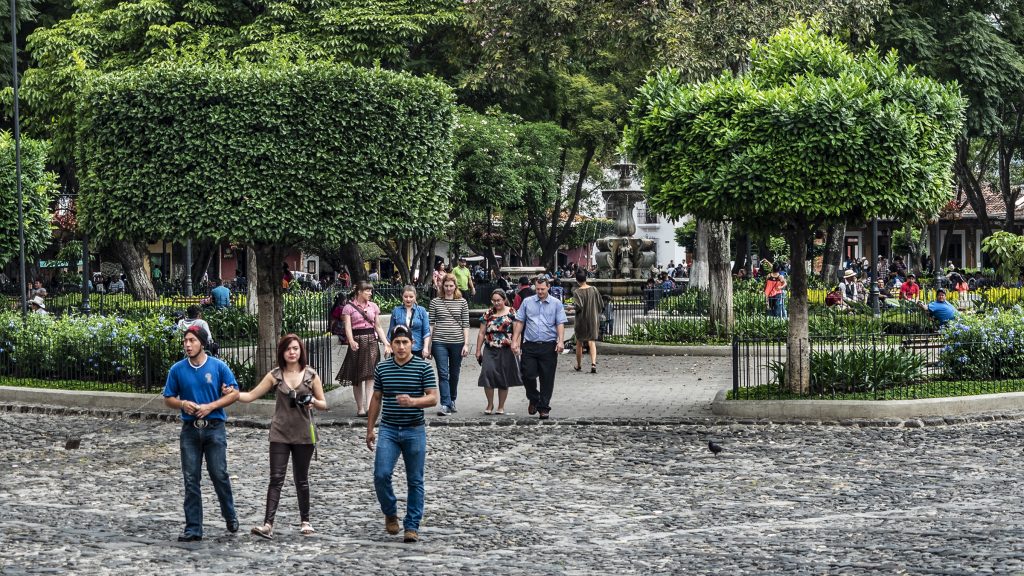 The Parque Central (Central Park) is the heart of the city, just a short walk from our hotel (the charming Los Olivos Boutique Hotel and Restaurant). The Mermaid Fountain, built by Guatemalan architect and builder Diego de Porres in 1737, is the centerpiece of the park.

Across the street from the park, you’ll find the Antigua Guatemala Cathedral (Catedral de San José). The original church was built around 1541, but suffered several earthquakes throughout its history, and the first church building was demolished in 1669. The cathedral was rebuilt and consecrated in 1680. By 1743 the cathedral was one of the largest in Central America. However, the devastating 1773 Guatemala earthquake seriously damaged much of the building, though the two towers at the front remained largely intact. These have undergone restoration work, and the cathedral has been partly rebuilt. 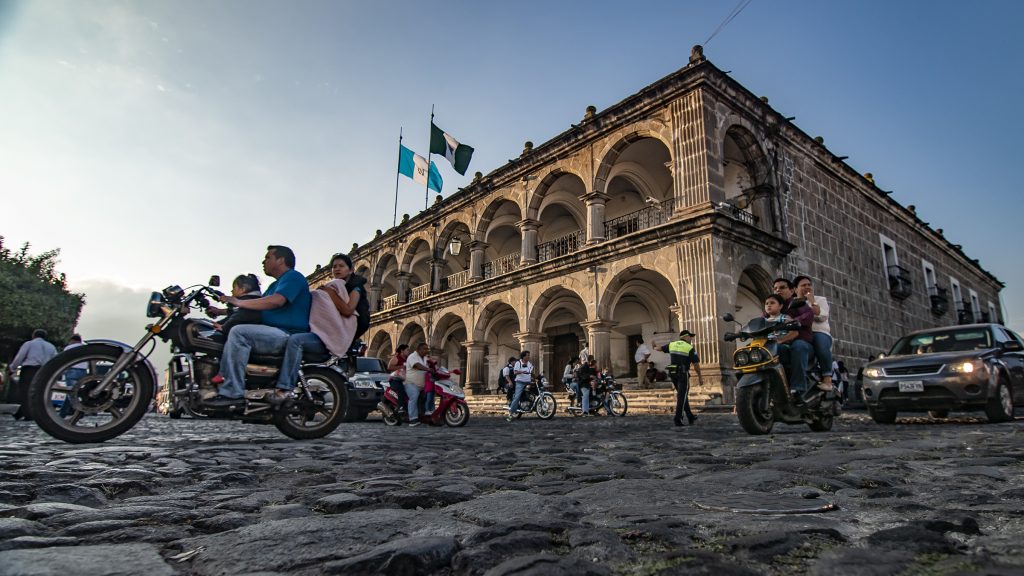 Motorcycles and scooters were a very popular way of getting around on the rough cobblestone streets of Antigua as evidenced by this photograph. In the distance stands the Museo del Libro Antiguo, the Ancient Book Museum, which was founded on March 16, 1956 in the House where they established the First Printing of the Kingdom of Guatemala in 1660. The museum showcases the greatest publications of the early days of Guatemalan printing, plus a replica of Guatemala’s first printing press, which began work here in the 1660s. One of its earliest products is prominently displayed: a first edition of Don Quixote de la Mancha (Part II). 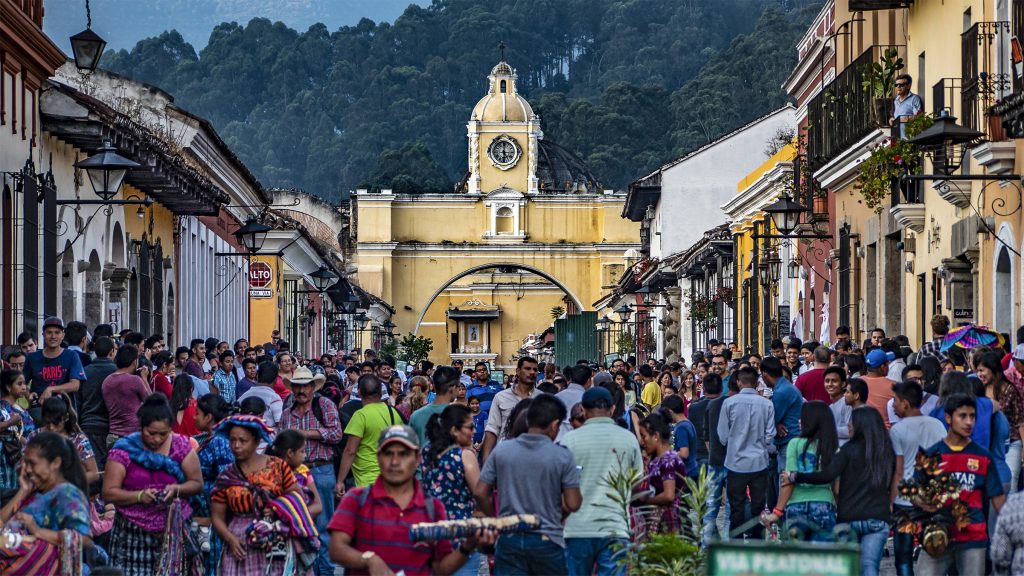 The Santa Catalina Arch is one of the distinguishable landmarks in Antigua Guatemala, Guatemala, located on 5th Avenue North. Built in the 17th century, it originally connected the Santa Catalina convent to a school, allowing the cloistered nuns to pass from one building to the other without going out on the street. A clock on top was added in the era of the Central American Federation, in the 1830s. I found the gathering of people in front of the arch as interesting as the arch itself. 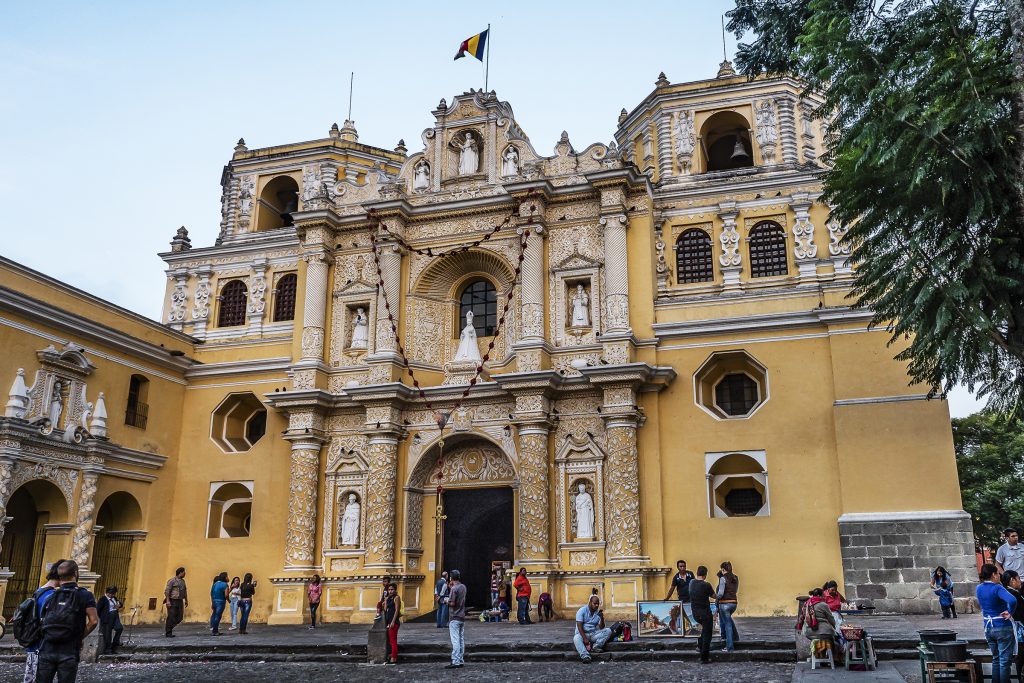 La Merced Church is a baroque church that was opened in 1767. Architect Juan de Dios Estrada was in charge of its construction, which began in 1749. The temple was inaugurated in 1767 and is from ultra baroque Guatemalan style with two bell towers. 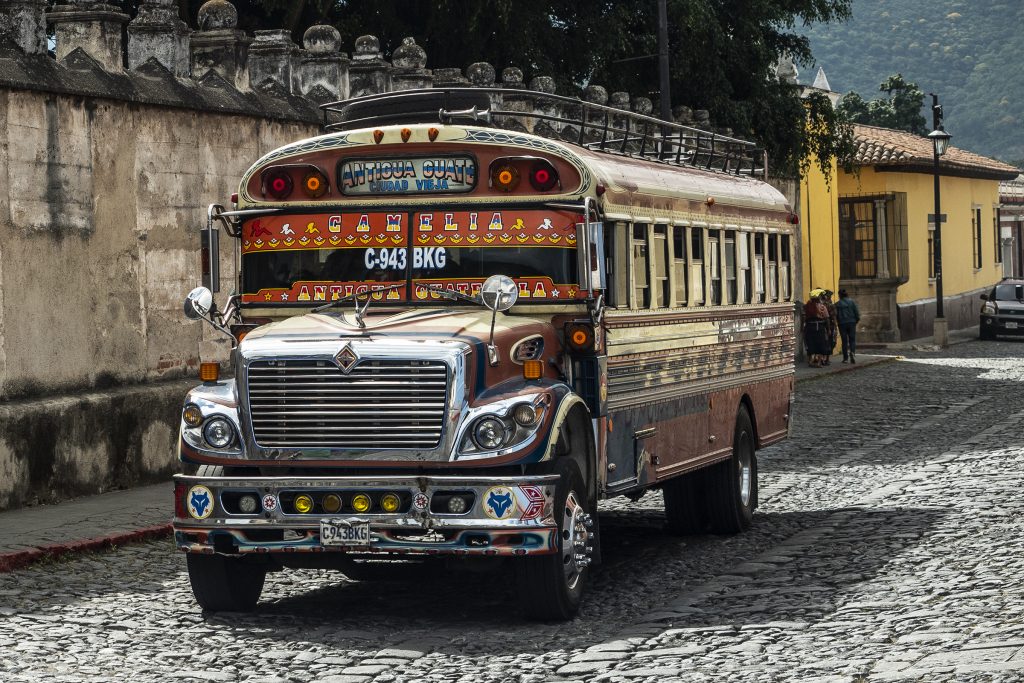 Decked out “Chicken Bus” or “camioneta” is the main form of local transport between towns, villages and cities throughout not only Guatemala but Central America. 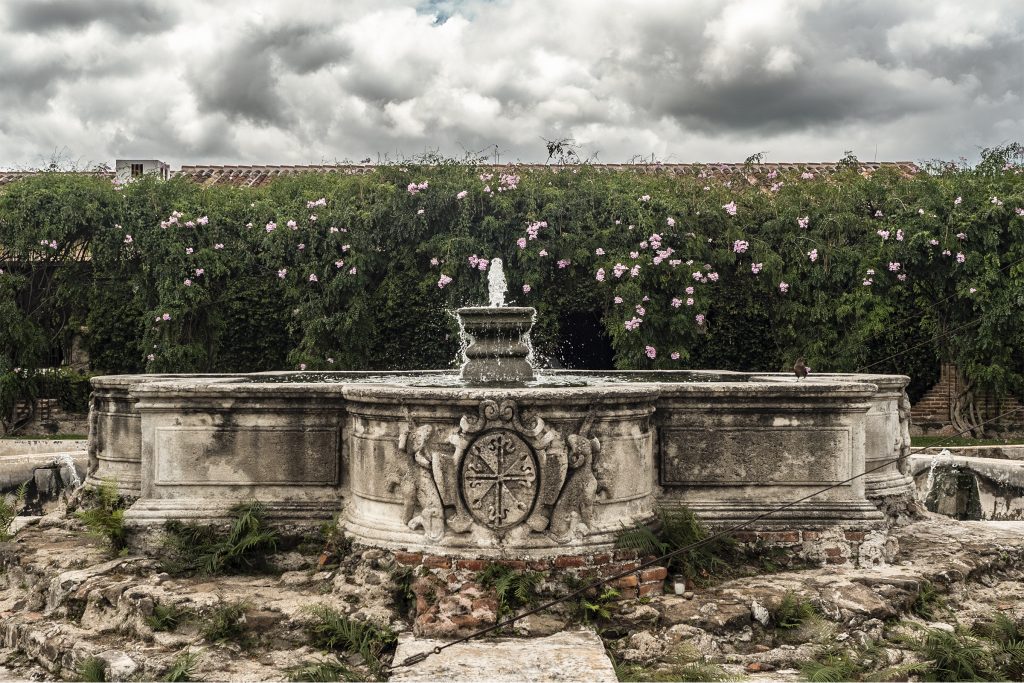 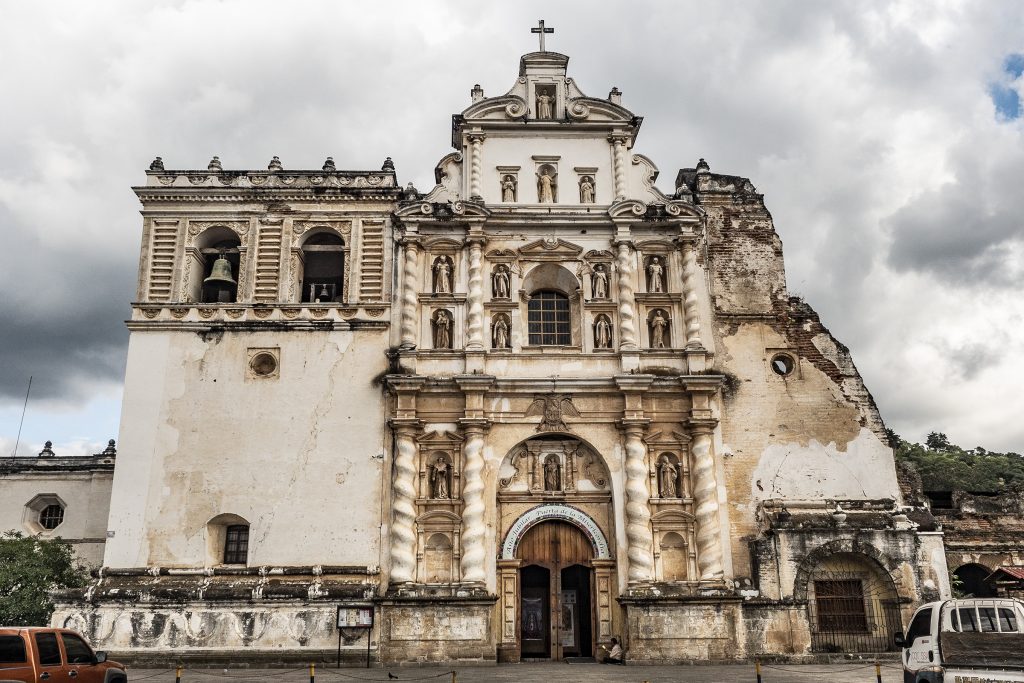 San Francisco Church, built in the 16th century by Guatemalan architect Diego de Porres, is one of the most frequented sanctuaries by the local population because of the shrine of Peter of Saint Joseph Betancur (Santo Hermano Pedro). In 1565 the first building was severely damaged by an earthquake and the tremors continued until 1773. After being abandoned for almost two hundred years, the church was rebuilt between 1961 and 1967 but areas of ruin still remain. 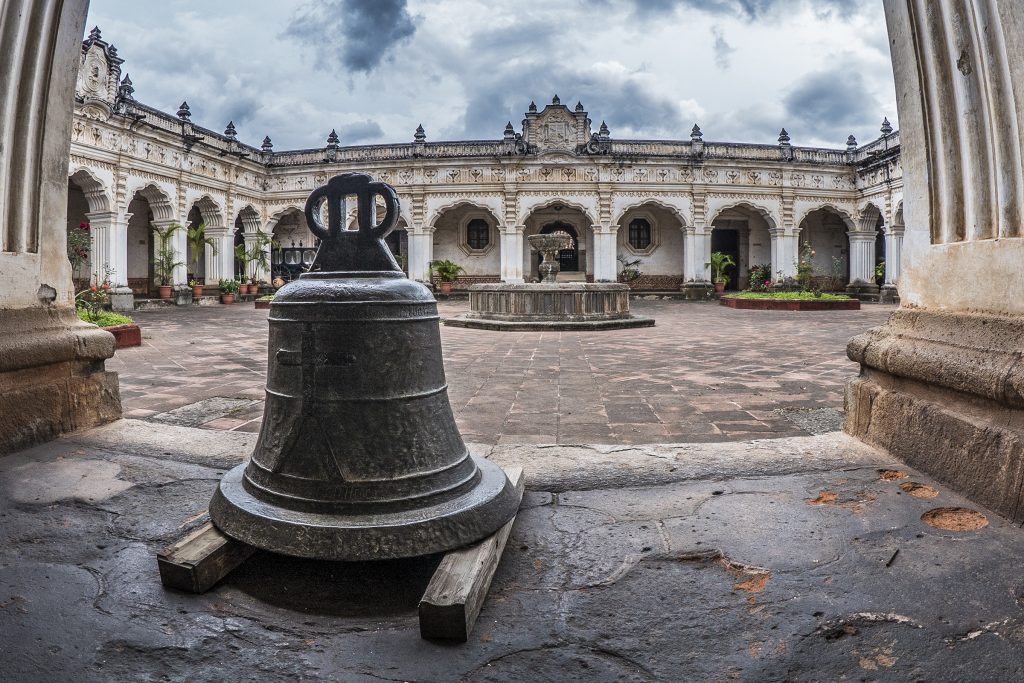 The Museum of Colonial Art, founded in 1936, once housed the University of San Carlos of Guatemala from 1768 to 1777. About 133 works are exhibited in its halls, including sculptures, paintings and furniture. 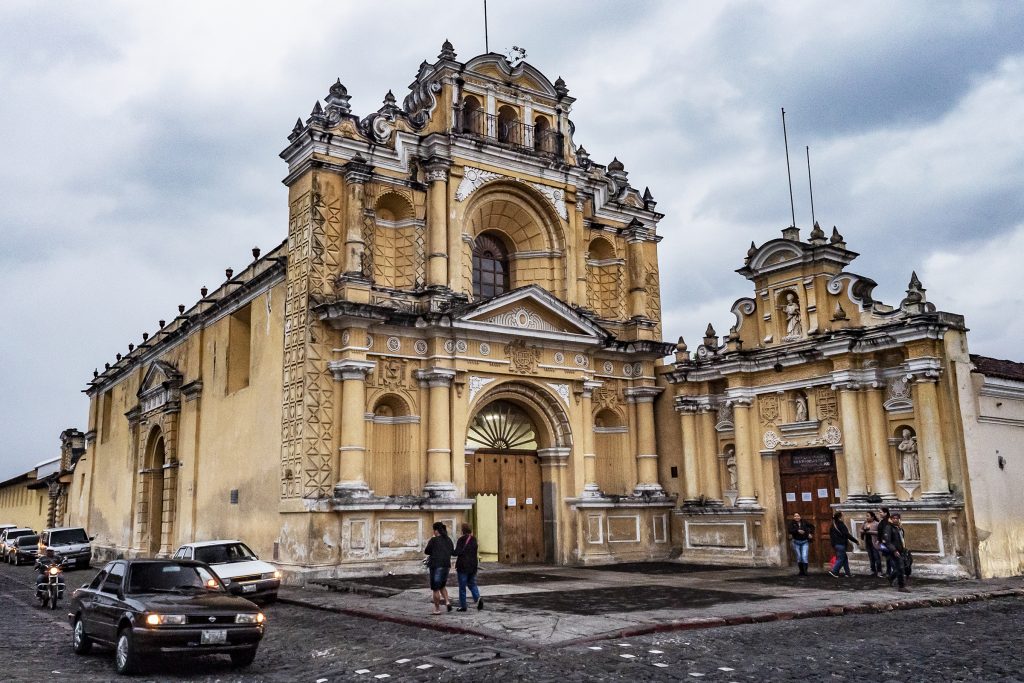 Hospital de San Pedro is a hospital was founded in 1663 by Dominican friars. It is dedicated to Peter of Saint Joseph Betancur (Pedro de San José de Betancur y Gonzáles), a Spanish saint and missionary in Guatemala who died in 1667. The building today serves as a social center for the needy, shelter for old people, treatment of malnourished children, handicapped and blind or mentally diseased people. 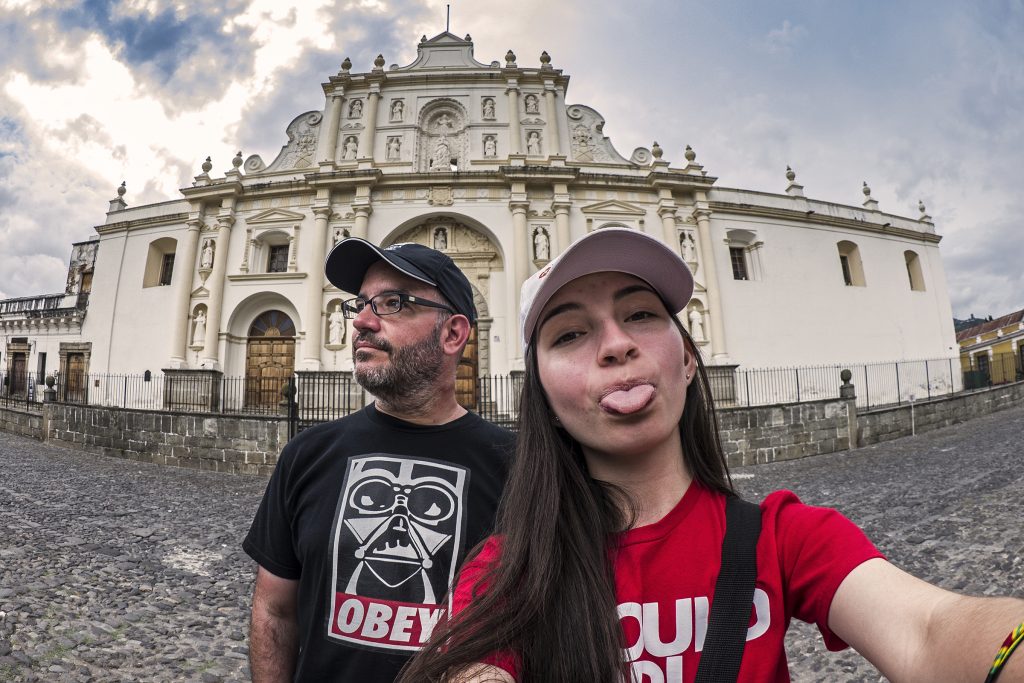 As for me and my daughter? Walking around Antigua was a blast. And we ate good, too. There isn’t a type of food that you won’t find in Antigua. We kept it simple, delicious Mexican burritos at the Cactus Grill, Italian food at El Cazador Italiano and pizza at the charming AngieAngie CafeArte. Like I said, put Antigua on your bucket list of places to visit – you won’t be sorry…

Written By DanPerezPhotography On November 15, 2016