Last month, I took the family to Spain for a much needed vacation. For our nine-day stay, I wanted to explore different cities so I was thinking a few days in Madrid then off to possibly Barcelona or Seville – maybe Granada? I pored over travel blogs, Tripadvisor, LonelyPlanet, etc, trying to find a location for us until finally deciding to bypass Spain’s “usual suspects” of cities and explore the lesser-known area of Extremadura but more on that later.

Our first stop on our direct flight from Miami was Madrid, the capital city of the Kingdom of Spain and the largest municipality in Spain as a whole. It is the third-largest city in the European Union (EU) after London and Berlin and has been occupied since prehistoric times. Now, there’s a whole lot I liked about Madrid. A whole lot. But here’s the thing – it reminded me too much of New York City. And I grew up in New York City. There were times I felt I was walking around the West Village and other times I felt I was walking the Upper East Side and when we visited Retiro Park I felt like I was in Central Park. I mean, there’s plenty of terrific sculptures and fountains and statues of kings on horses (and the art museums were great) but the feeling that I was in my beloved NYC was hard to shake. And when I go overseas, I want to feel like I’m in a different place, that’s all.

That said, we enjoyed our few days in Madrid. If I had to move there, I’d feel right at home…except for the whole tapas thing. When I go out to eat, I want an appetizer and then my meal and maybe a dessert. Having to order 10 different things off a menu to equal a meal took some getting used to but on our last day there, we had great tapas at La Musa in the lively Madrid neighbourhood of Malasaña. Just when I was finally getting the hang of the whole tapas thing. Alas.

So here are a few photographs I shot walking the colorful and lively streets of Madrid (accompanied by my Lumix GH4 and a few good lenses). Enjoy… 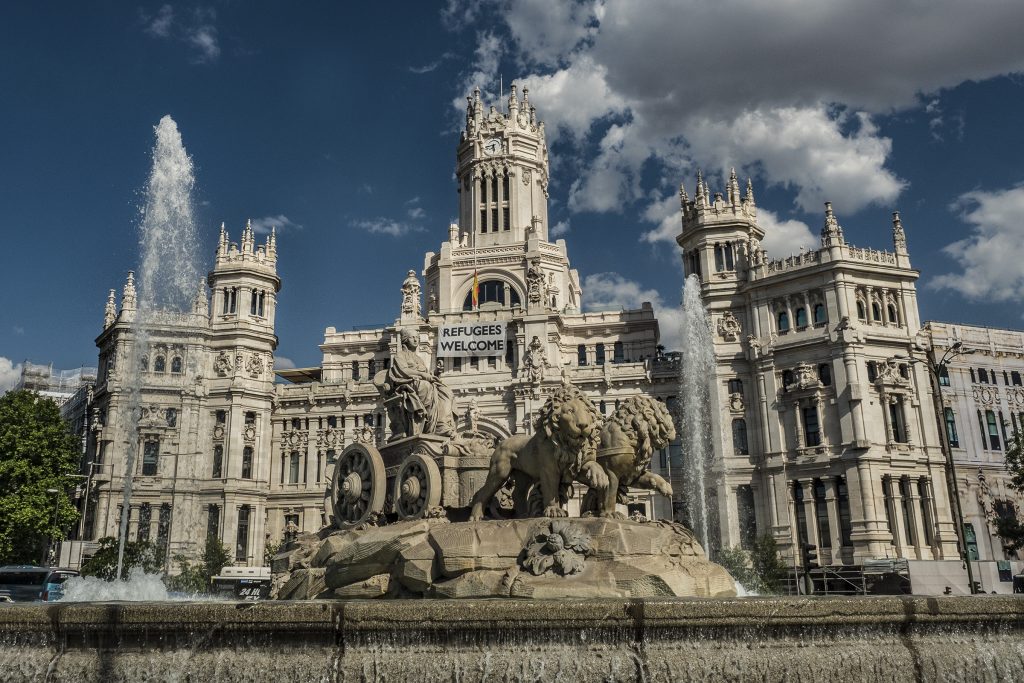 The Fuente de Cibeles (Cibeles Fountain) is the most important symbol of Madrid. It was built between 1777 and 1782 under the orders of King Carlos III. It was designed by Spanish architect Ventura Rodríguez in marble and represents the goddess Cibele (or Ceres, roman goddess of nature) astride a lion-drawn chariot. 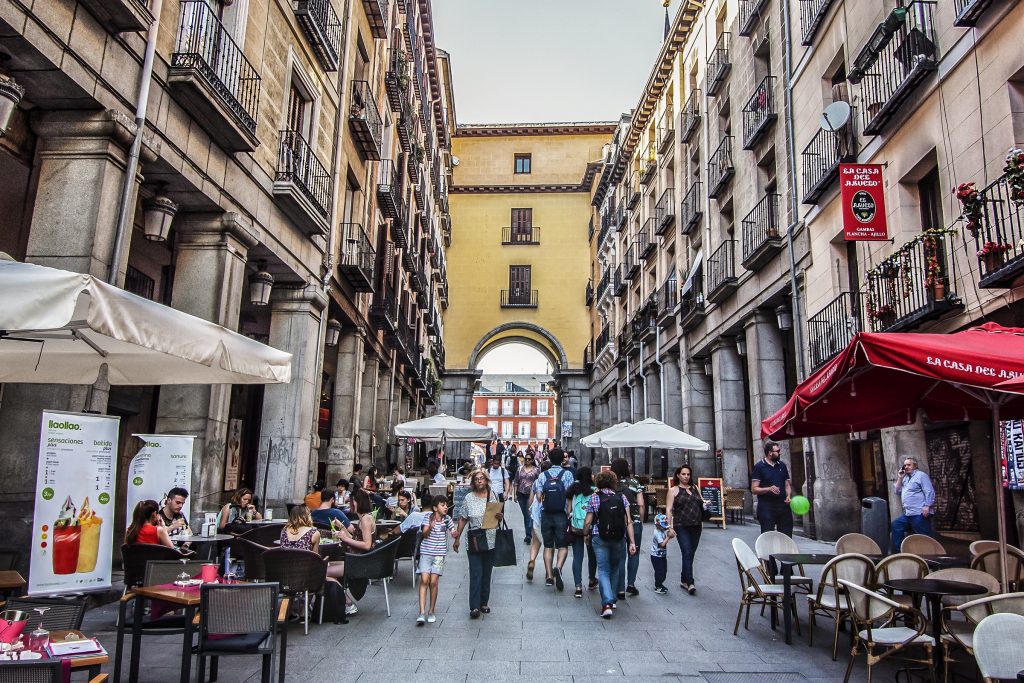 Walking in to the Plaza Mayor, which was built during Philip III’s reign (1598–1621) and is a central plaza in the city of Madrid. 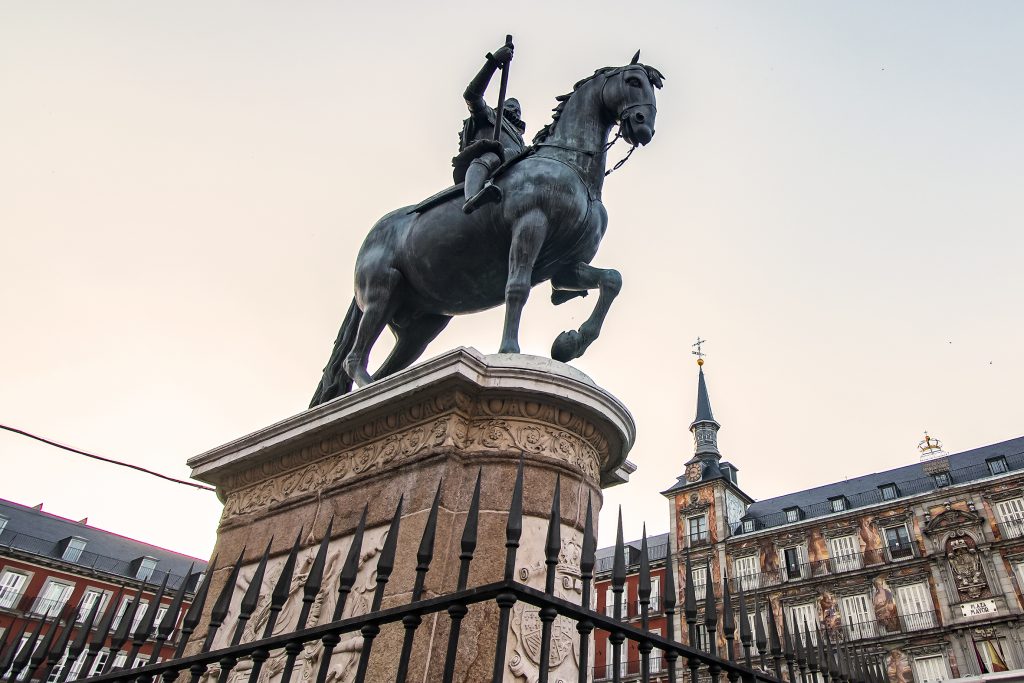 Inside the Plaza you’ll find the equestrian statue of Philip III by Flemish sculptor Jean Boulogne which dates to 1616 (you know you’re in Europe when you walk into a plaza and see a giant statue of some king on a horse). On the right is the Casa de la Panadería (Bakery House), which was completed in 1619 by Spanish architect Juan Gómez de Mora. 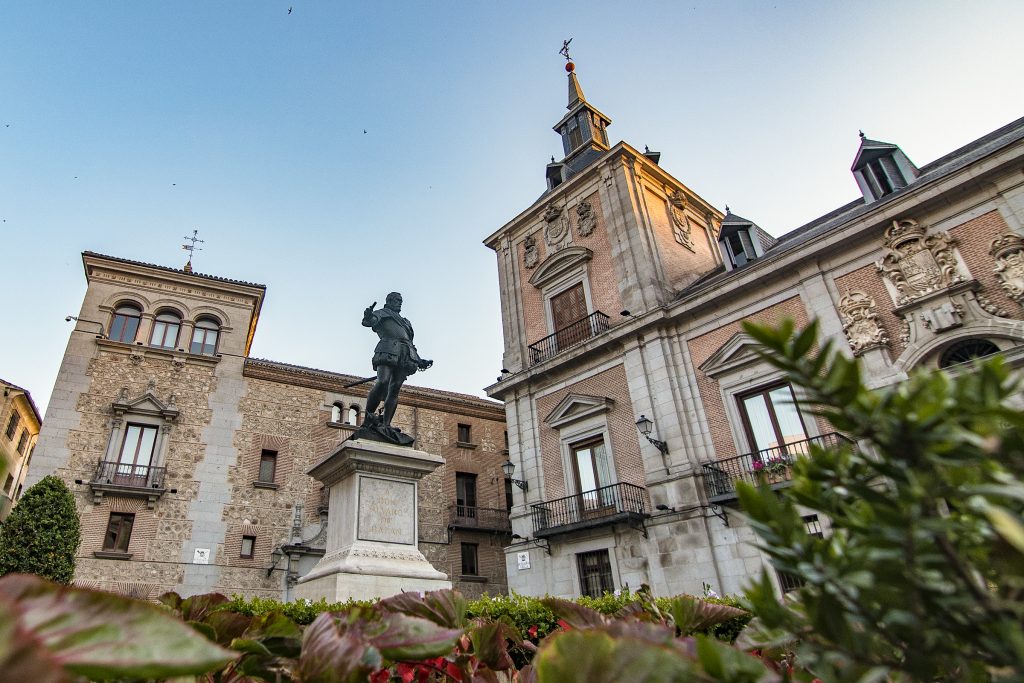 Statue of Álvaro de Bazán, 1st Marquis of Santa Cruz de Mudela (1526-1588) adorns Plaza de la Villa (which dates back to the 15th century) to the west of Plaza Mayor. Bazán was a Spanish admiral and according to Spanish sources, he was never defeated in a fifty-year long career. The sculpture was completed in 1888 by Spanish sculptor Mariano Benlliure. 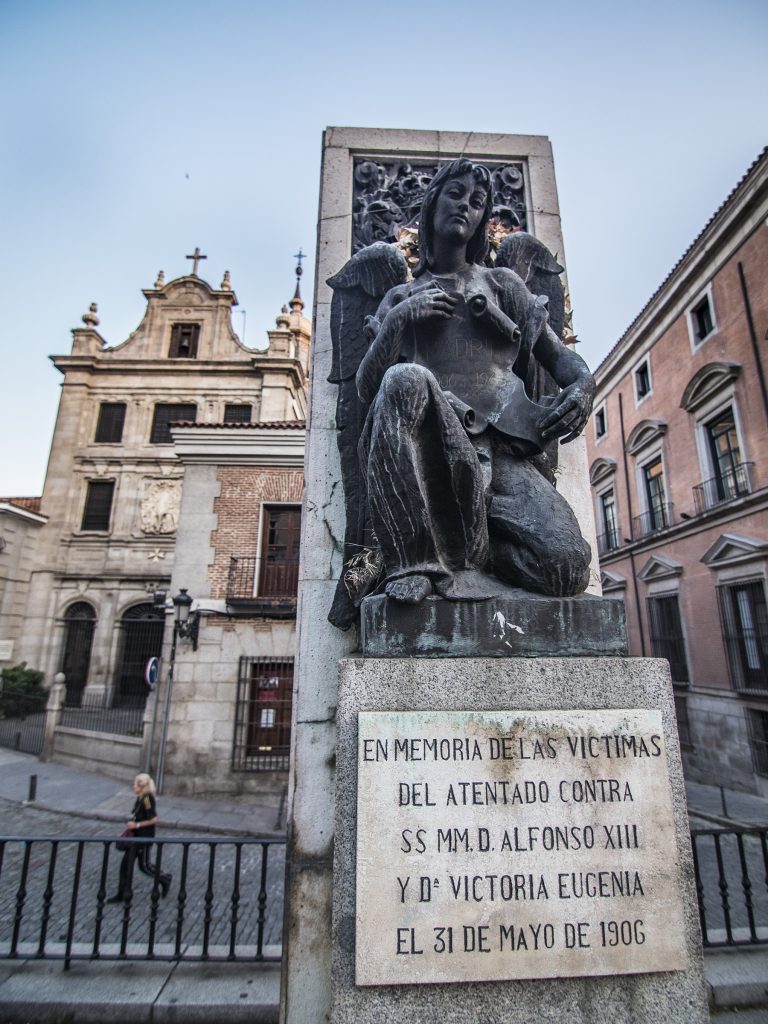 Monument on Calle Mayor in Madrid for the victims of a terrorist bombing by anarchist Mateu Morral Roca in an attempt to assassinate King Alfonso XIII of Spain and his bride Victoria Eugenia on May 31, 1906, the day the two were married. The attempt, which killed almost thirty people and wounded a hundred, was carried out by throwing a bomb at the royal bridal carriage as it drove along the Calle Mayor in the city center, through crowds of people. Although his attempt failed, blood of the bystanders spattered the young Queen’s wedding gown.

Morral managed to escape from Madrid but on June 2, 1906, he was recognized by several people in a village near Torrejón de Ardoz where he stopped to eat. When the authorities arrived, he appeared to be surrendering peacefully but managed to shoot and kill the guard who was taking him to Torrejón de Ardoz prison, and to commit suicide the moment after. 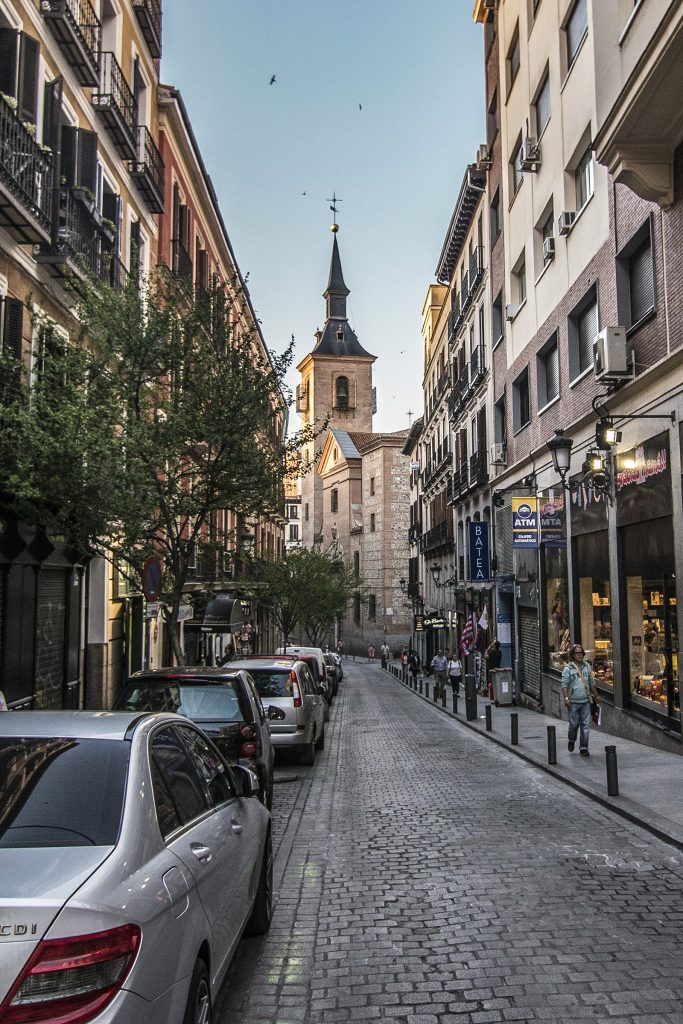 Bellfry of the Iglesia de San Ginés de Arlés (church of San Ginés), one of the oldest churches in Madrid. The church dates back to between the 12th and 13th centuries and its name comes from the fact that it was dedicated to the patron saint of notaries and secretaries(!), Saint Genesius of Arles (San Ginés de Arlés). 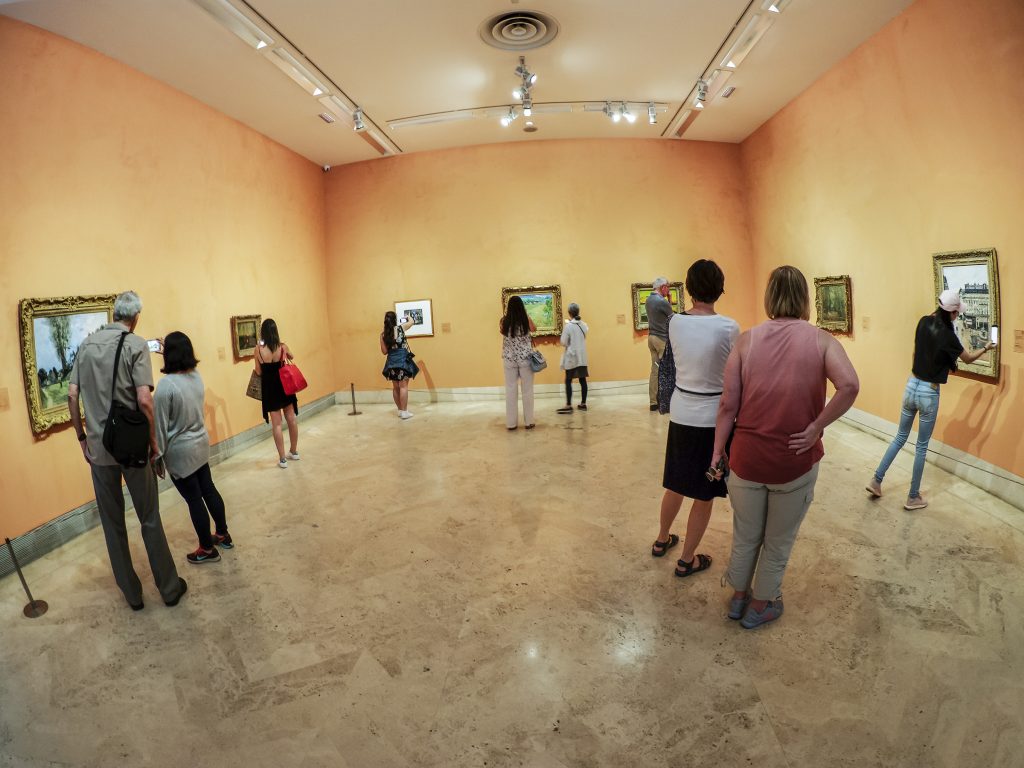 The Thyssen-Bornemisza Museum houses over 1,600 paintings and was once the second largest private collection in the world after the British Royal Collection. The museum, which officially opened in 1992, houses the core collection of Heinrich Freiherr Thyssen-Bornemisza de Kászon et Impérfalva, a German-Hungarian entrepreneur and art collector. 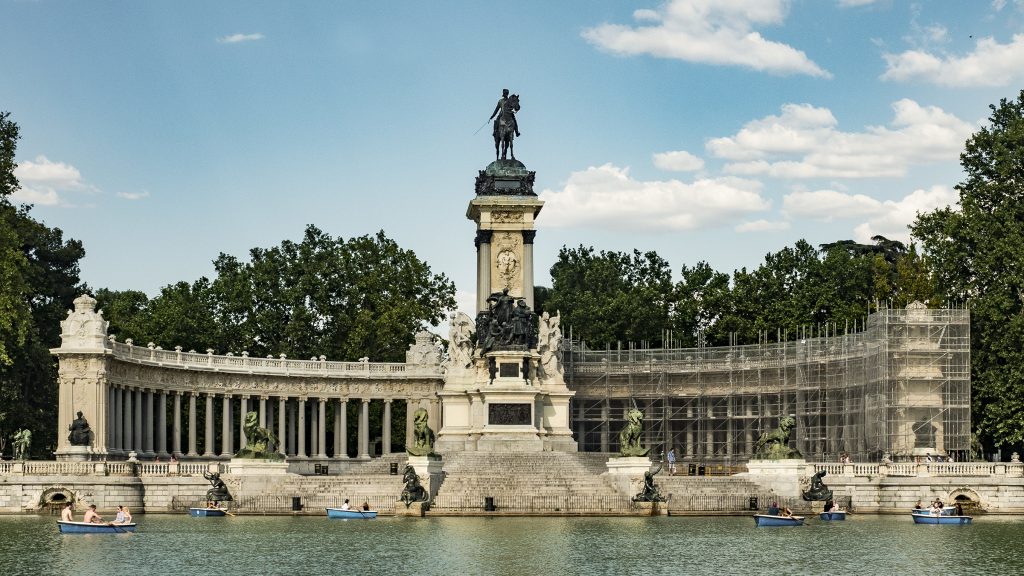 Monument to King Alfonso XII is situated on the east edge of an artificial lake near the center of Buen Retiro Park. More than twenty sculptors worked on the project, which was originally designed by architect José Grases Riera. The monument was inaugurated on June 6, 1922. 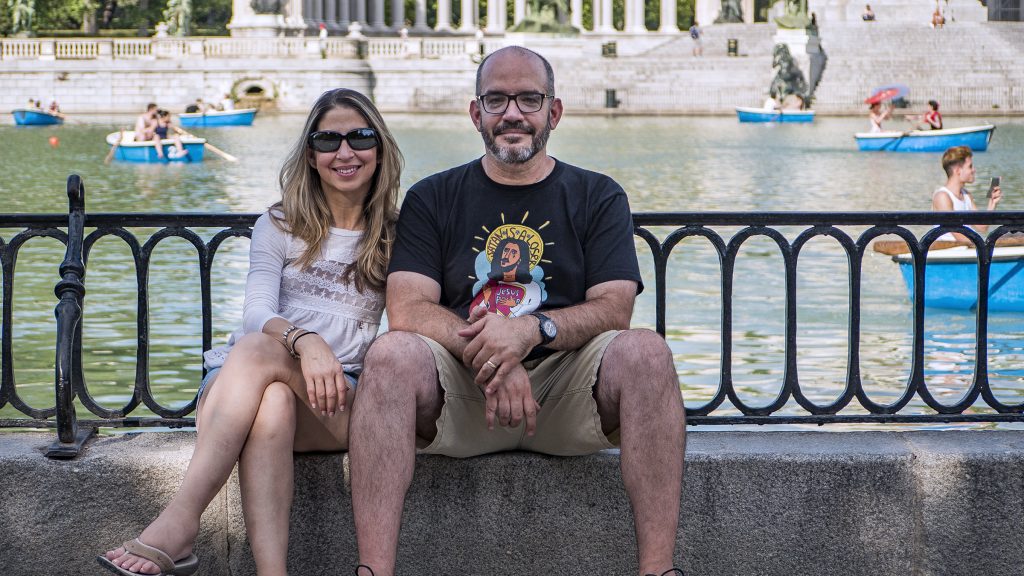 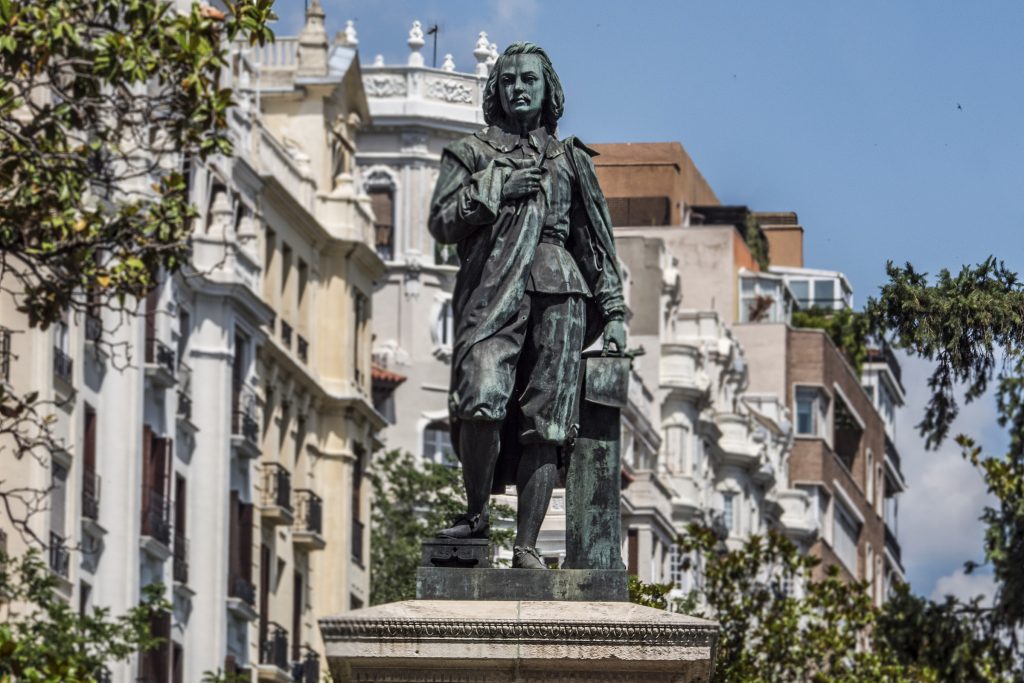 Sculpture of famous Spanish Baroque painter Bartolomé Esteban Murillo (1617-1682) by Spanish sculptor Sabino Medina. The bronze statue, which was dedicated in 1871, is located at the Plaza de Murillo just aside of the Prado Museum and is an exact replica of the one in Seville made by Medina in 1864. 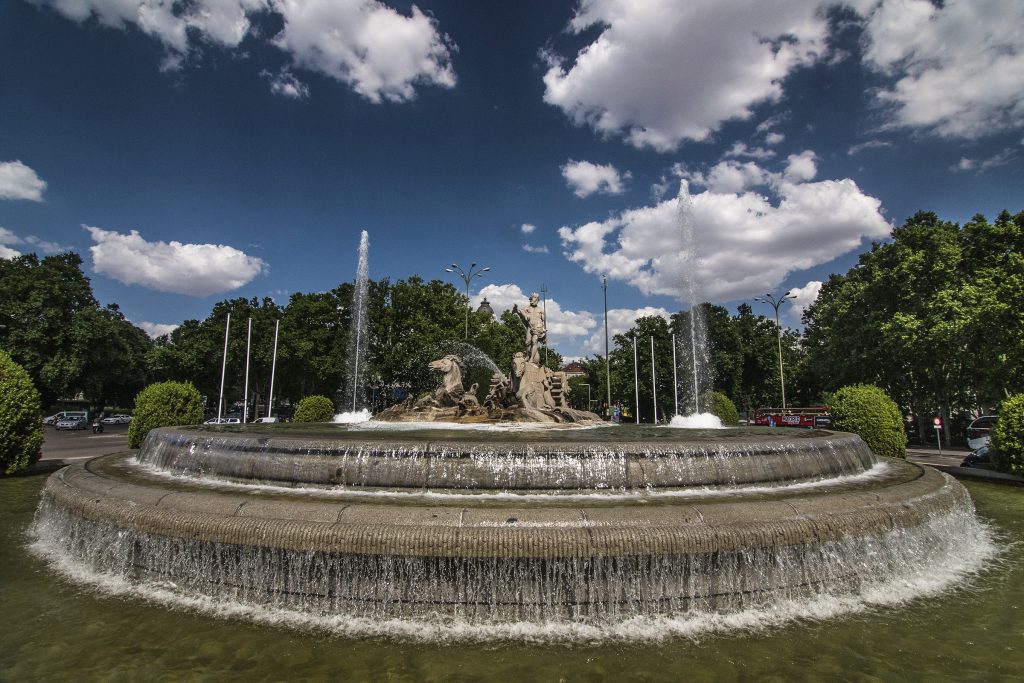 The magnificent Fuente de Neptuno (Fountain of Neptune) in the Plaza de Canovas del Castillo. The marble fountain, which was completed in 1784, was created by Spanish sculptor Juan Pascual de la Mena under the supervision of prolific Spanish architect and artist Ventura Rodríguez Tizón. 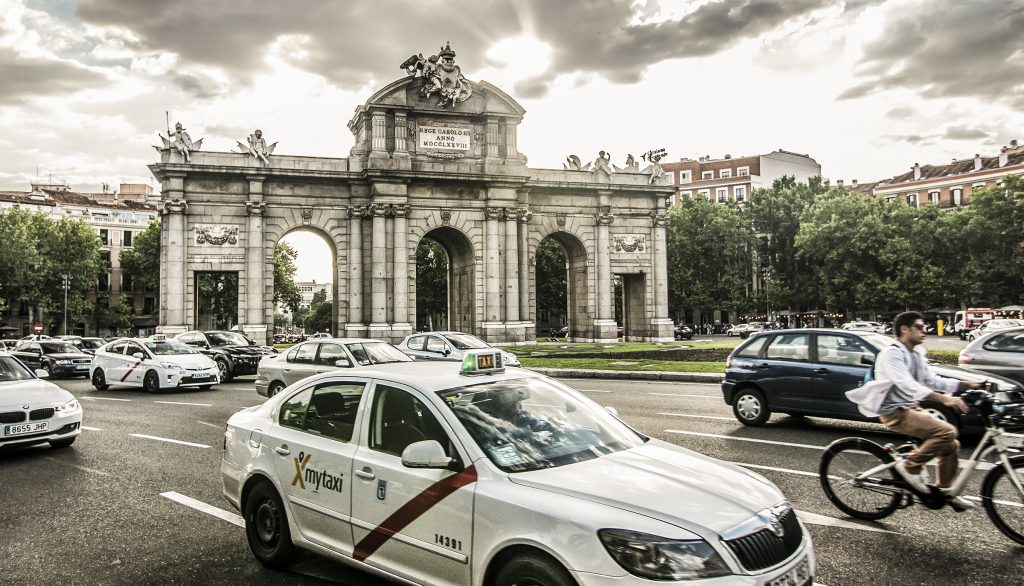 Puerta de Alcalá in the bustling Plaza de la Independencia, just outside the main entrance to the Parque del Buen Retiro. Around the year 1774, king Charles III commissioned Italian architect Francesco Sabatini to construct a monumental gate in the city wall through which an expanded road to the city of Alcalá was to pass. Puerta de Alcalá was inaugurated in 1778. 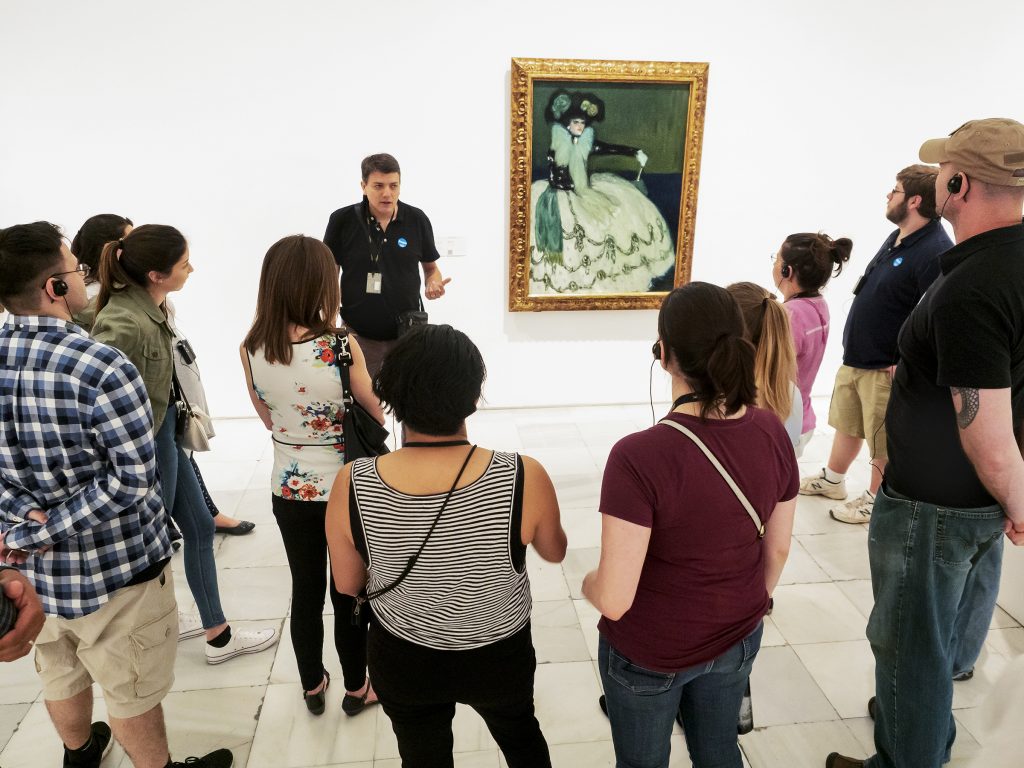 The Museo Nacional Centro de Arte Reina Sofía (Queen Sofía Museum) is Spain’s national museum of 20th-century art. The museum was officially inaugurated on September 10, 1992, and is named for Queen Sofía, the wife of King Juan Carlos I, who reigned from 1975 to 2014. The museum is mainly dedicated to Spanish art and its most famous masterpiece is Picasso’s painting Guernica. No photographs were allowed in the Guernica exhibit but after coming face-to-face with the mural-sized oil painting, it was very difficult to walk away. In the photograph above, a tour group discusses Picasso’s “Mujer en azul”.

As for the Prado Museum, the main Spanish national art museum, they didn’t allow photographs (I mean, how would anyone know we were even there, right?) so we skipped it. 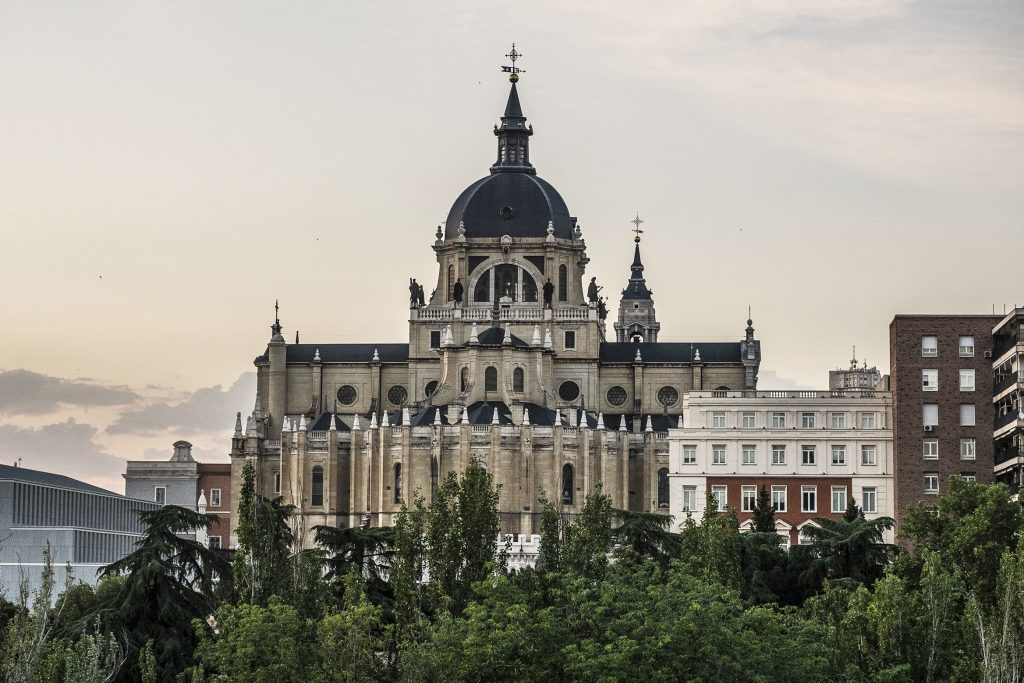 Street view of Catedral de Santa María la Real de la Almudena, the principle church of the Diocese of Madrid. A relatively “new” building, construction of Almudena only began in 1879 and was not completed until 1993, when it was consecrated by Pope John Paul II. 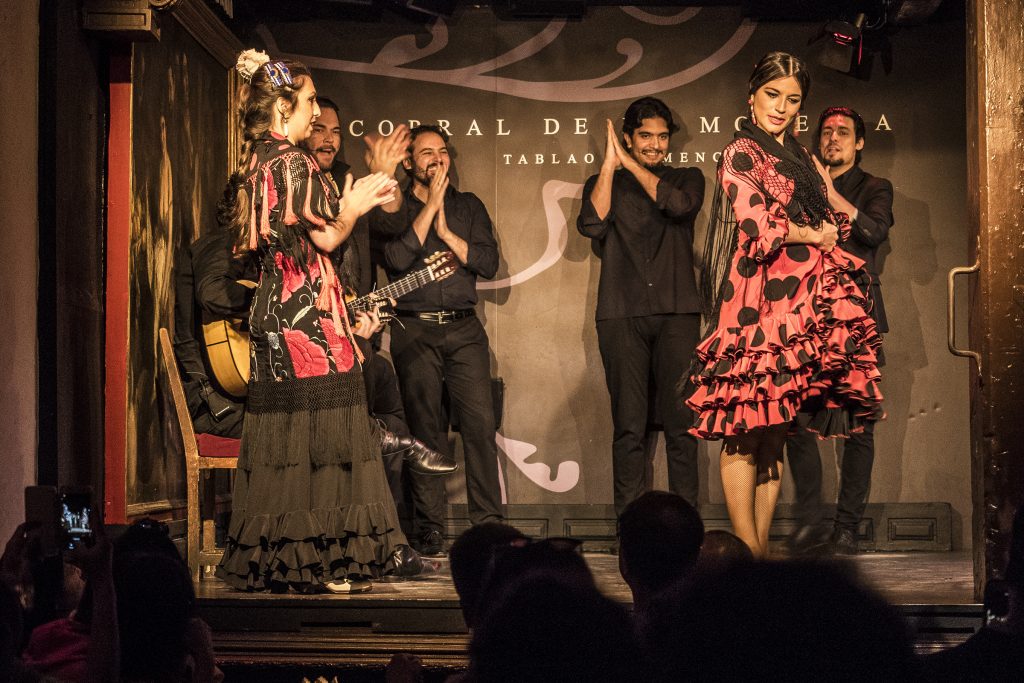 One of the highlights of our trip was getting in to see the nightly flamenco show at the historic Corral de la Morería. Listed in the New York Times bestseller “1000 Places to See Before You Die”, the flamenco show was…how can I put it best? Caliente. 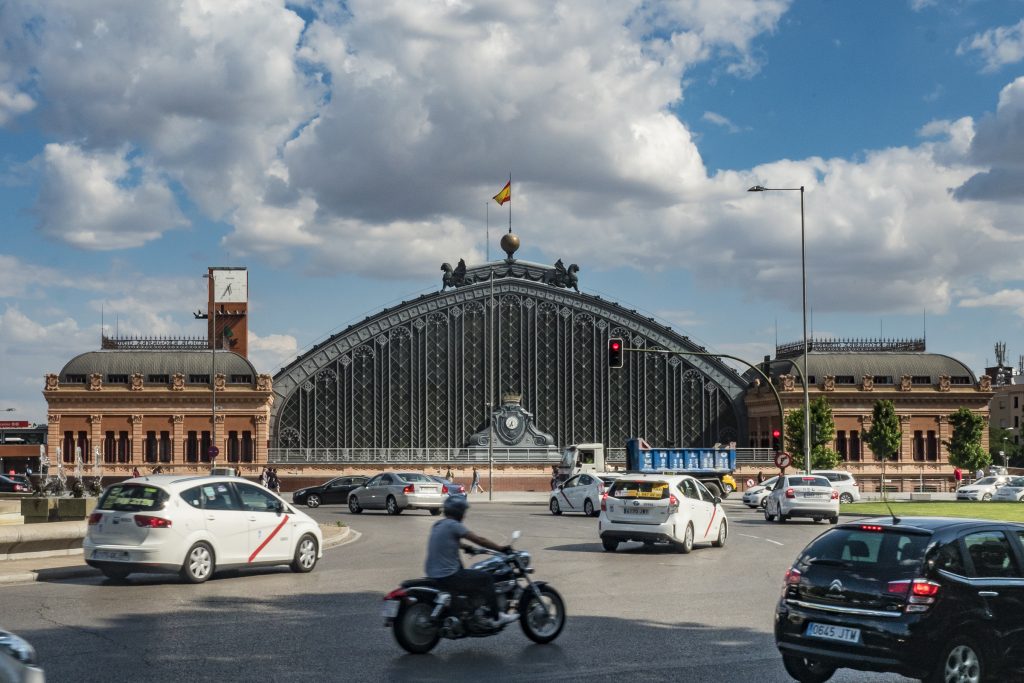 Estación de Madrid Atocha is the largest railway station in Madrid. The railway station was inaugurated on February 9, 1851 and rebuilt and reopened in 1892 after being destroyed by fire. Spanish engineer and architect Alberto de Palacio Elissagne was responsible for the old building’s new design, which incorporated a style that was predominantly of wrought iron. Gustave Eiffel, better known for the tower bearing his name in Paris, also collaborated on the project.

And stay tuned for more images from our trip to Spain…

Written By DanPerezPhotography On June 8, 2017