If you didn’t already know, my wife Madelyn passed away this past September due to complications from surgery to remove a tumor in her brain. My daughter and I decided we didn’t want to spend Christmas home alone on what was my wife’s favorite holiday so I came up with this trip to Spain. Actually, an eight-city road trip that would start in Madrid, head south to Córdoba, further south to Gibraltar, then to Cádiz and Jerez de la Frontera, then up to Seville, further north to Salamanca then NW to Santiago de Compostela in Galicia where we would spend Christmas with family (my mother was born there).

This is Part II of a series of photographs from our trip (if you missed Part I, you can view the images HERE) and let me just say that December is a lovely time to visit Spain, especially the southern region of Andalucía. The main attractions aren’t swarming with tourists and the weather is cool but not cold at all. For this trip I rented the new Fujifilm X-T3 and a few good lenses (the good folks at Fujifilm made me an offer I couldn’t refuse). Nothing against my faithful Lumix GH4, which has produced so many wonderful photographs for me the past few years but with all I had read about the X-T3 (which hit the market back in September of 2018), I really wanted to test it out. And let me tell you, this is a truly wonderful camera – for photography and video.

In my previous post, I covered our time in Madrid, Gibraltar, Cádiz and Jerez de la Frontera, I skipped over Córdoba (our first stop after Madrid) because it truly deserves its own post. Córdoba is a city in Andalucía, southern Spain, and the capital of the province of Córdoba. It was a Roman settlement, taken over by the Visigoths (a kingdom that occupied what is now southwestern France and the Iberian Peninsula from the 5th to the 8th centuries), and then taken by Muslim armies in the eighth century.

One such UNESCO World Heritage Site is the Mosque–Cathedral of Córdoba (Mezquita-Catedral de Córdoba), regarded as one of the most accomplished monuments of Moorish architecture. In 784(!) Abd al-Rahman I (founder of a Muslim dynasty that ruled the greater part of Iberia for nearly three centuries and first Emir of Córdoba) ordered construction of the Great Mosque, which was considerably expanded by later Muslim rulers. In 1236, Córdoba was returned to Christian rule when it was conquered by King Ferdinand III of Castile during the Reconquista and the centre of the mosque was converted into a Catholic cathedral.

In 1523, the construction of the Cathedral of Cordoba started under the direction of the Spanish architect Hernán Ruiz I. After many discussions, they finally decided to insert the new Cathedral in the very heart of the former Mosque. After the death of the architect, his son, grandson and Juan de Ochoa (a Spanish renaissance architect who died in 1606) continued the work, combining two centuries of architectural evolution into one remarkable construction. 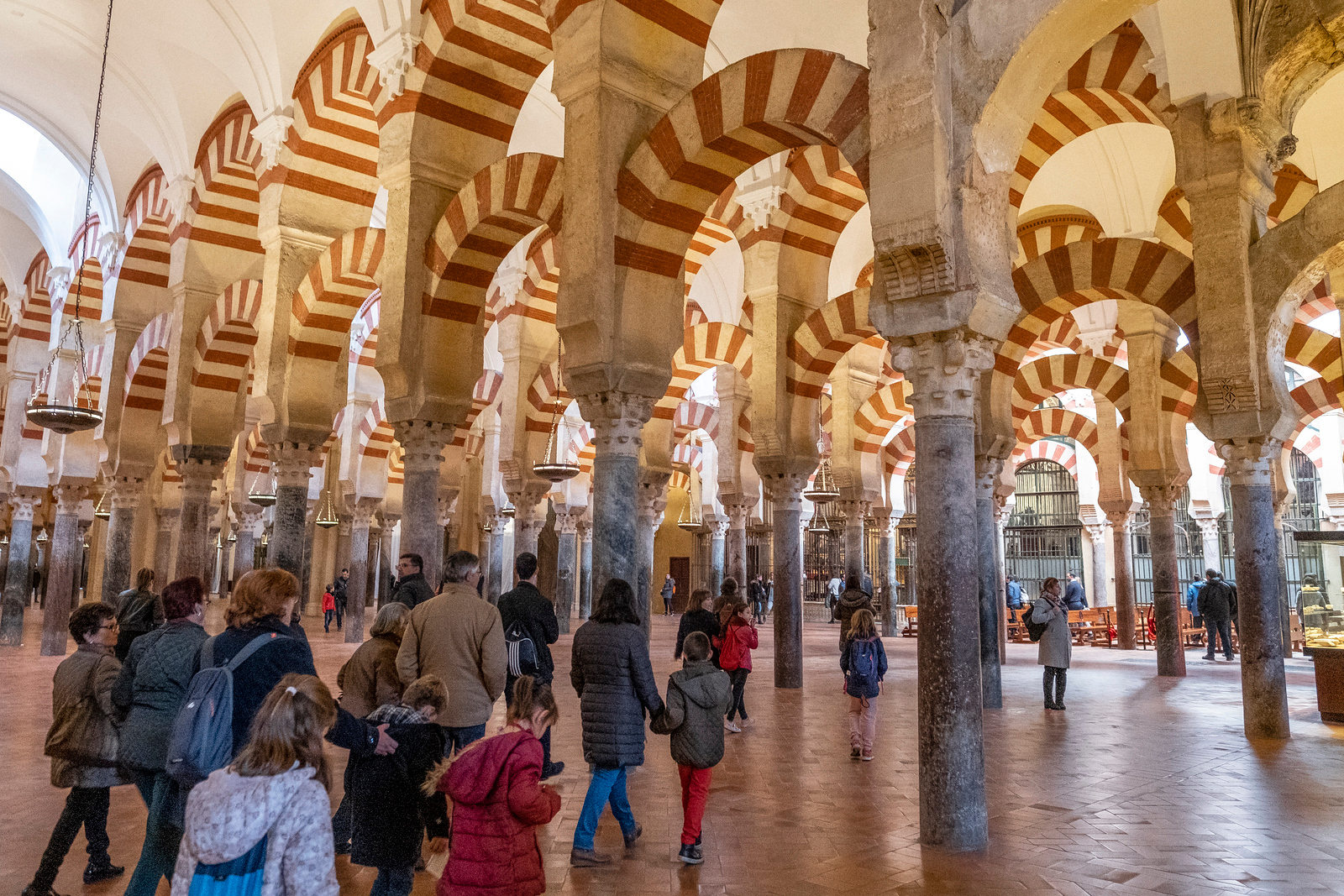 Each year approximately 1.5 million tourists marvel at this impressive landmark; not only the largest mosque in the entire world but the largest temple in the world, as well. Since the early 2000s, however, Spanish Muslims have lobbied the Roman Catholic Church to allow them to pray in the cathedral. This Muslim campaign has been rejected on multiple occasions, both by the church authorities in Spain and by the Vatican.

The building is most notable for its 856 columns of jasper, onyx, marble, granite and porphyry (igneous rock). These were made from pieces of the Roman temple that had occupied the site previously, as well as other Roman buildings, such as the Mérida amphitheatre in Spain’s Extremadura region (we visited this region in 2017 – check out the photographs). The double arches were an innovation, permitting higher ceilings than would otherwise be possible with relatively low columns.

The mihrab (or apse) of a mosque faces in the direction of Mecca; by facing the mihrab, worshipers pray towards Mecca. Mecca is east-southeast of the mosque, but the mihrab of this mosque unusually points south. The mihrab in the Great Mosque of Cordoba is framed by an exquisitely decorated arch behind which is an unusually large space, the size of a small room. Visitors to the mosque can only view the mihrab from behind a gate. Chapel of the Souls of Purgatory 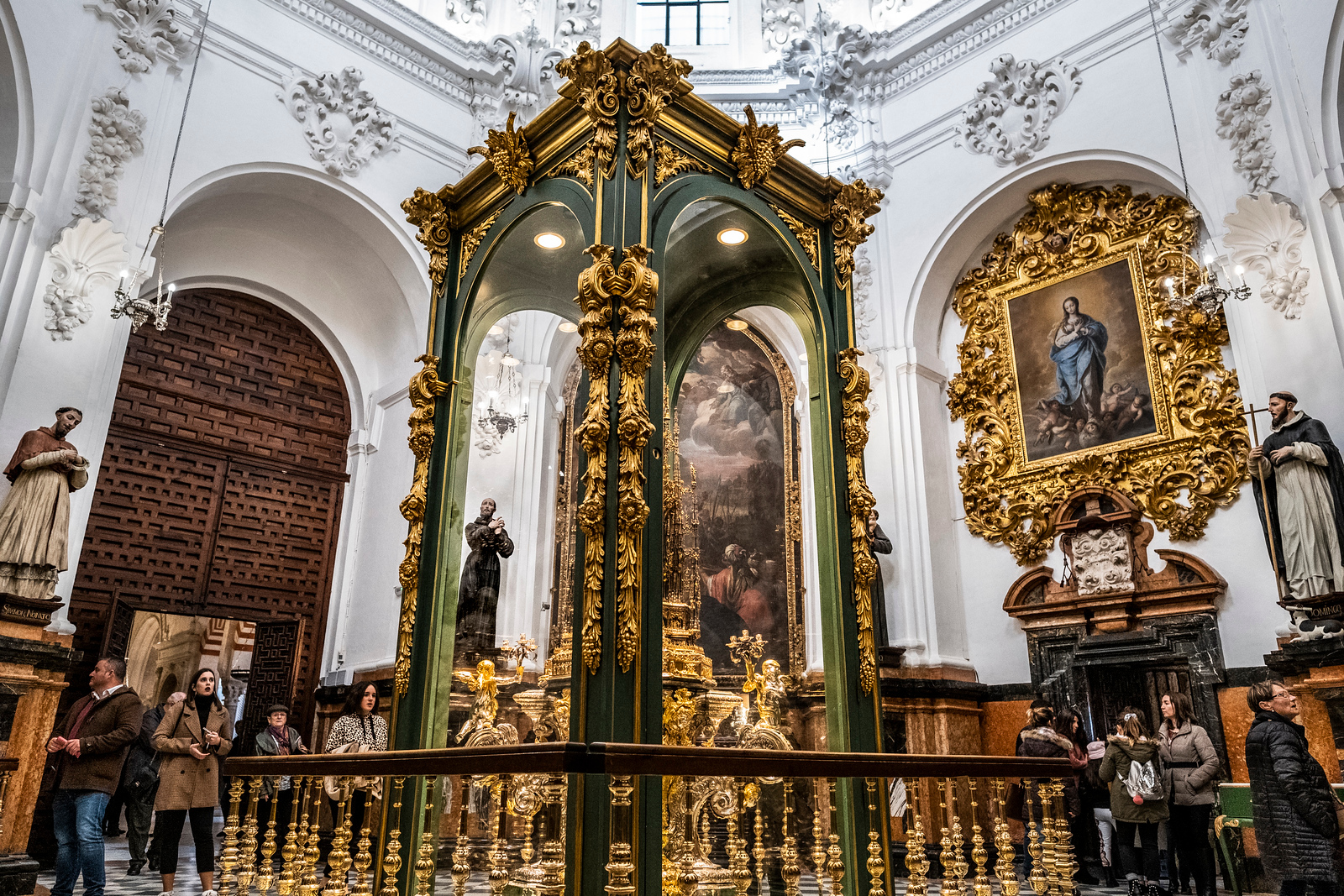 In the Chapel of Cardinal Salazar, you can admire the impressive Cathedral collections of ivory and silver objects from the 15th-20th centuries, among which is the spectacular Corpus Christi Monstrance, made in the 16th century by Enrique de Arfe, a silversmith of German descent. 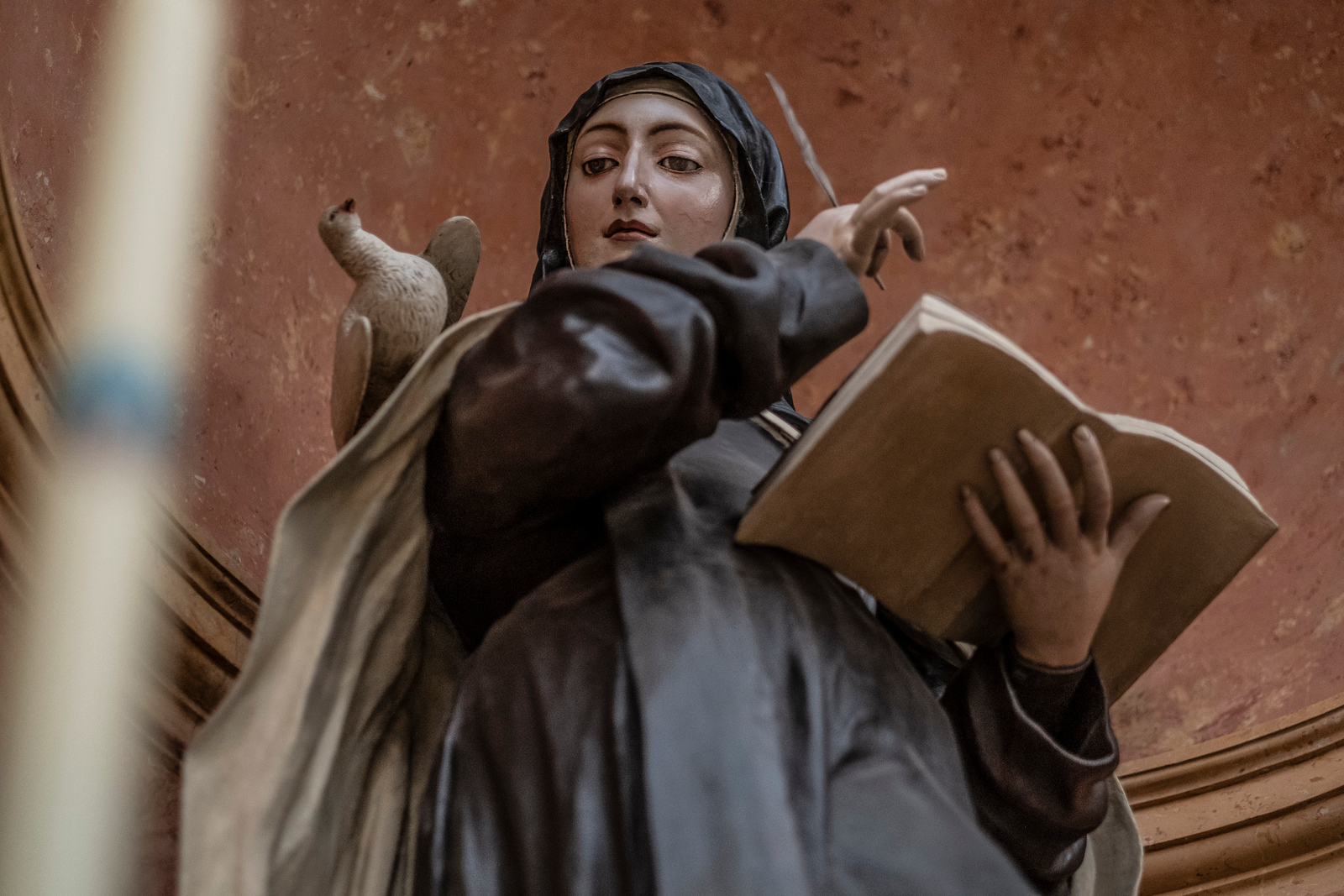 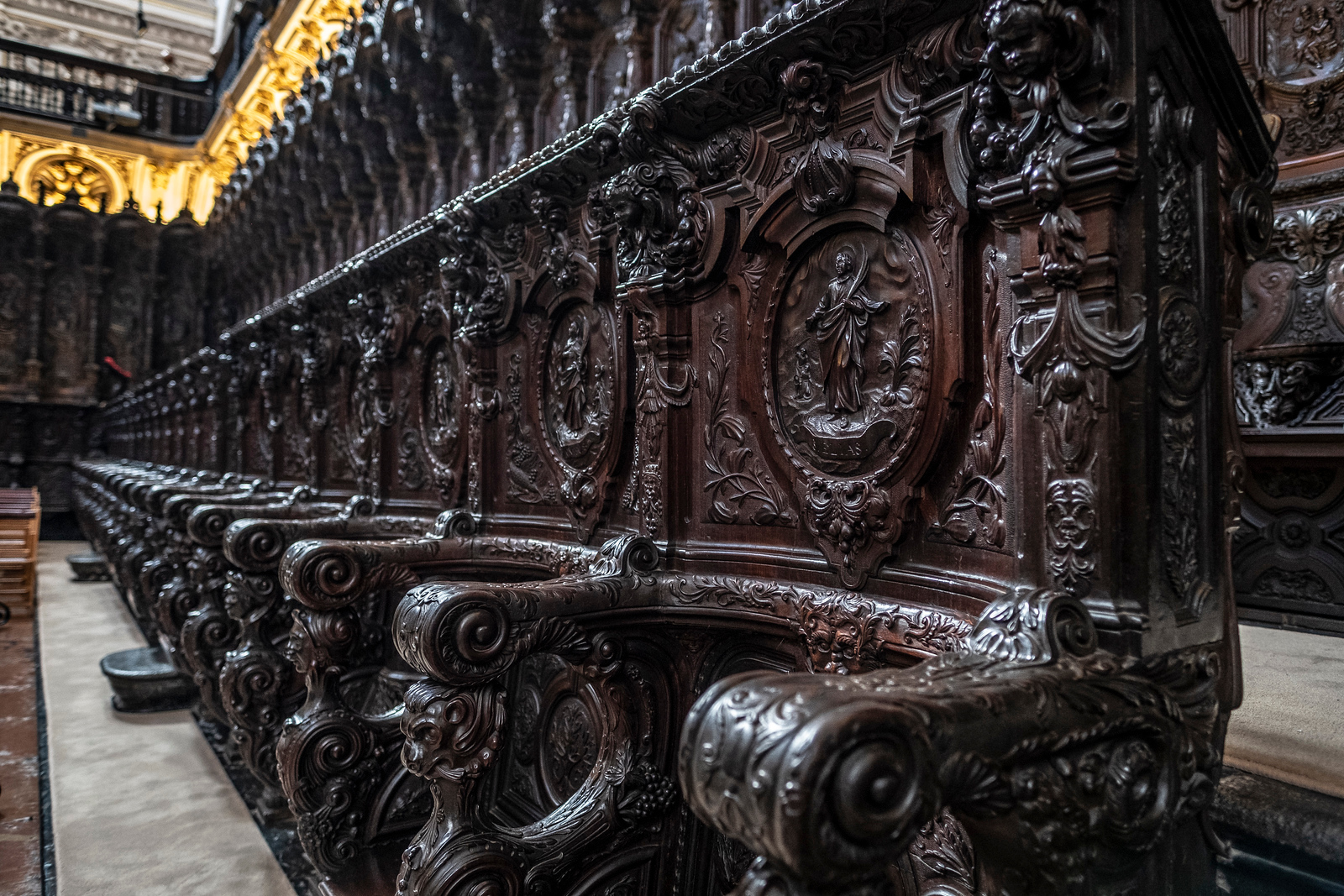 Stunning choir stalls by Spanish Baroque painter and sculptor of the Sevillian school of sculpture Pedro Duque Cornejo, who was appointed to create the stalls and started to create the ensemble in 1748 that would eventually include 30 upper seats and 23 lower seats. Moreover, the spectacular episcopal throne, commissioned through a deed signed on 26 September 1752, contains three seats and is designed as if it were an altarpiece, structured into two bodies and three aisles. Among these what stands out is the upper vault, on which we see the representation of the Ascension of the Lord, a sensational life-size figure with an interesting anatomical study. The composition is finished off with the presence of Archangel Raphael. 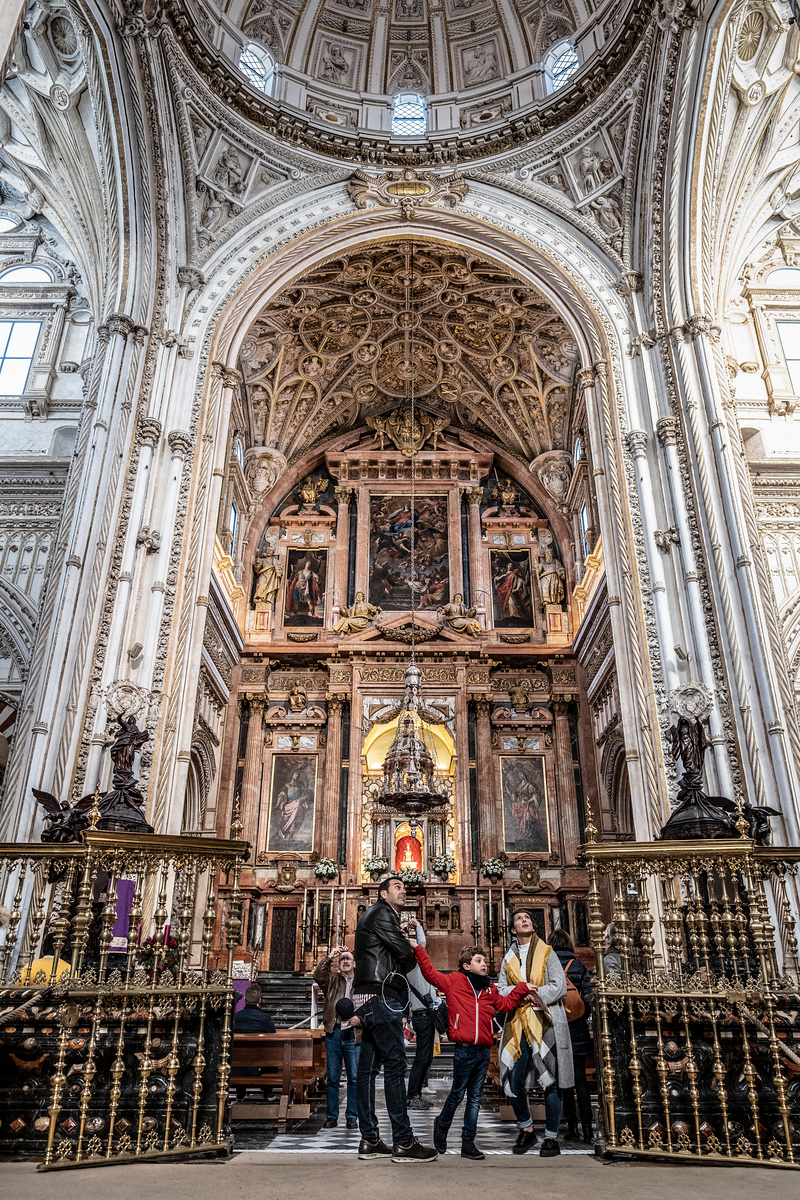 The altarpiece of the Main Chapel was designed by Alonso Matías, the leading figure of Cordoban altarpiece art of the 17th century. Construction began in 1618 through 1646 and features works by Spanish painter Antonio Palomino (1653–1726) 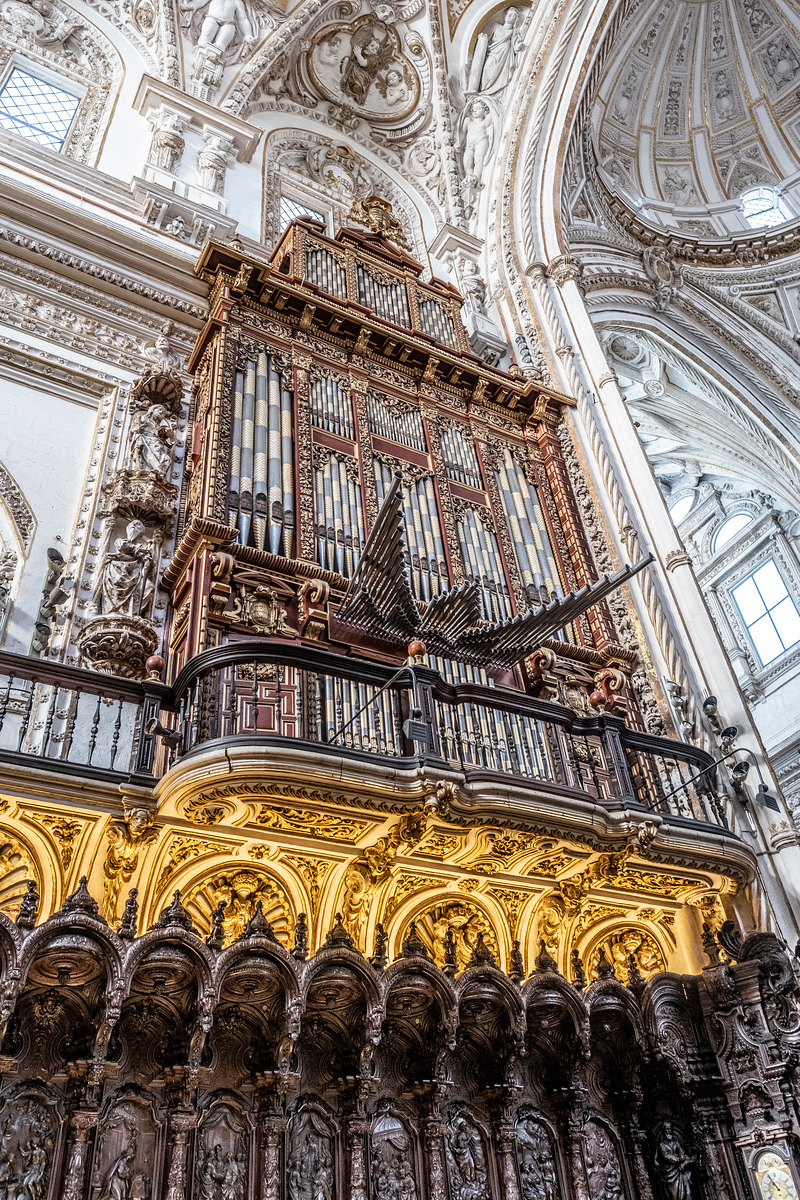 The organ was built during the episcopate of Francisco Alarcón (1658-1675) and features around 3500 pipes making it one of the largest organs in Spain.

The Mosque–Cathedral of Córdoba is stunning from the ground up… Did my daughter dig it? You bet. Me, too. The Mosque–Cathedral of Córdoba is worthy of all the hype – an absolutely amazing structure. 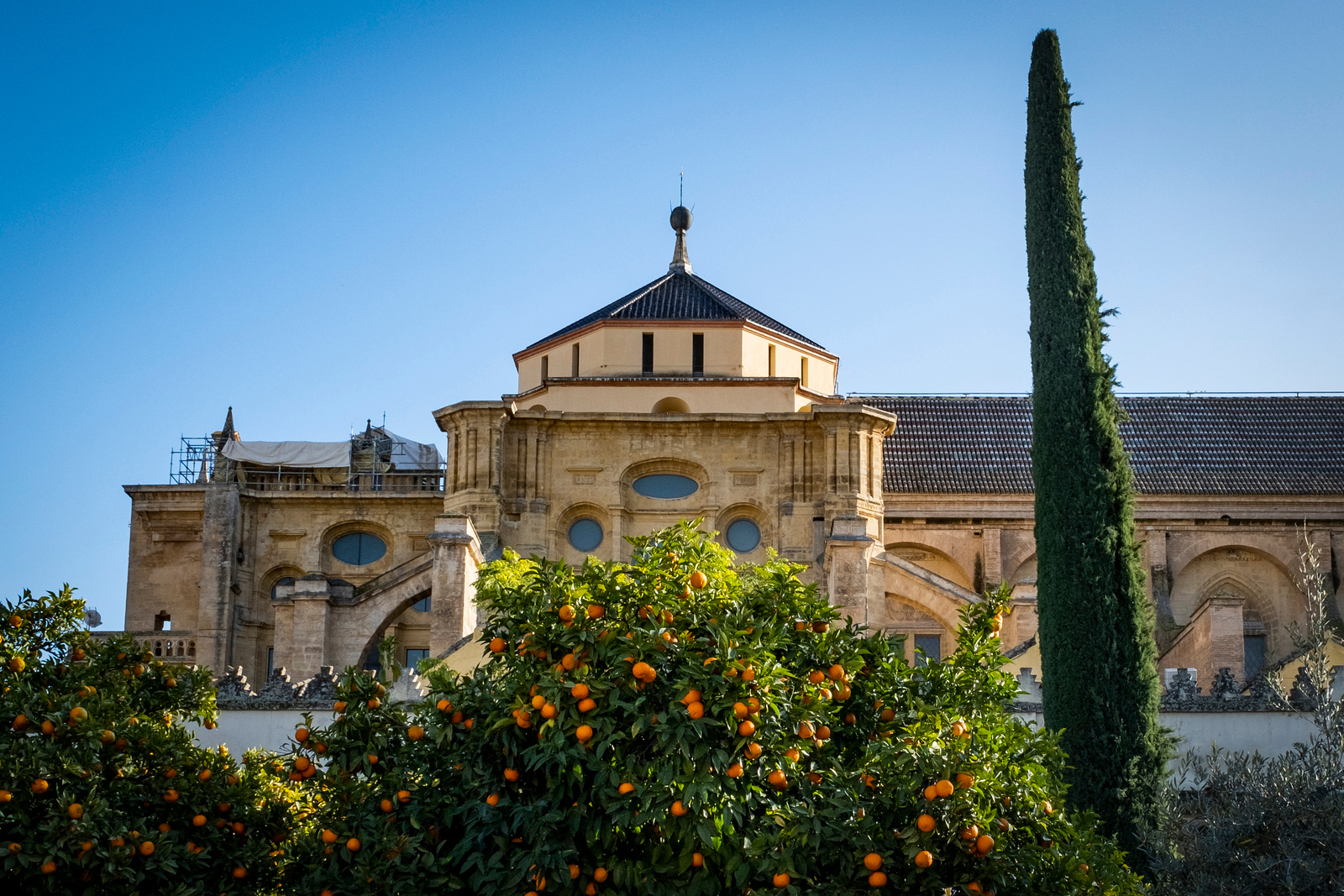 Back outside now, the visitor entrance to the Mosque–Cathedral is through the main courtyard and the Patio de los Naranjos, which dates back to 1236. Its current name and appearance are the result of the work undertaken by Bishop Francisco Reinoso (1597-1601), who suggested that the space be used as a garden. 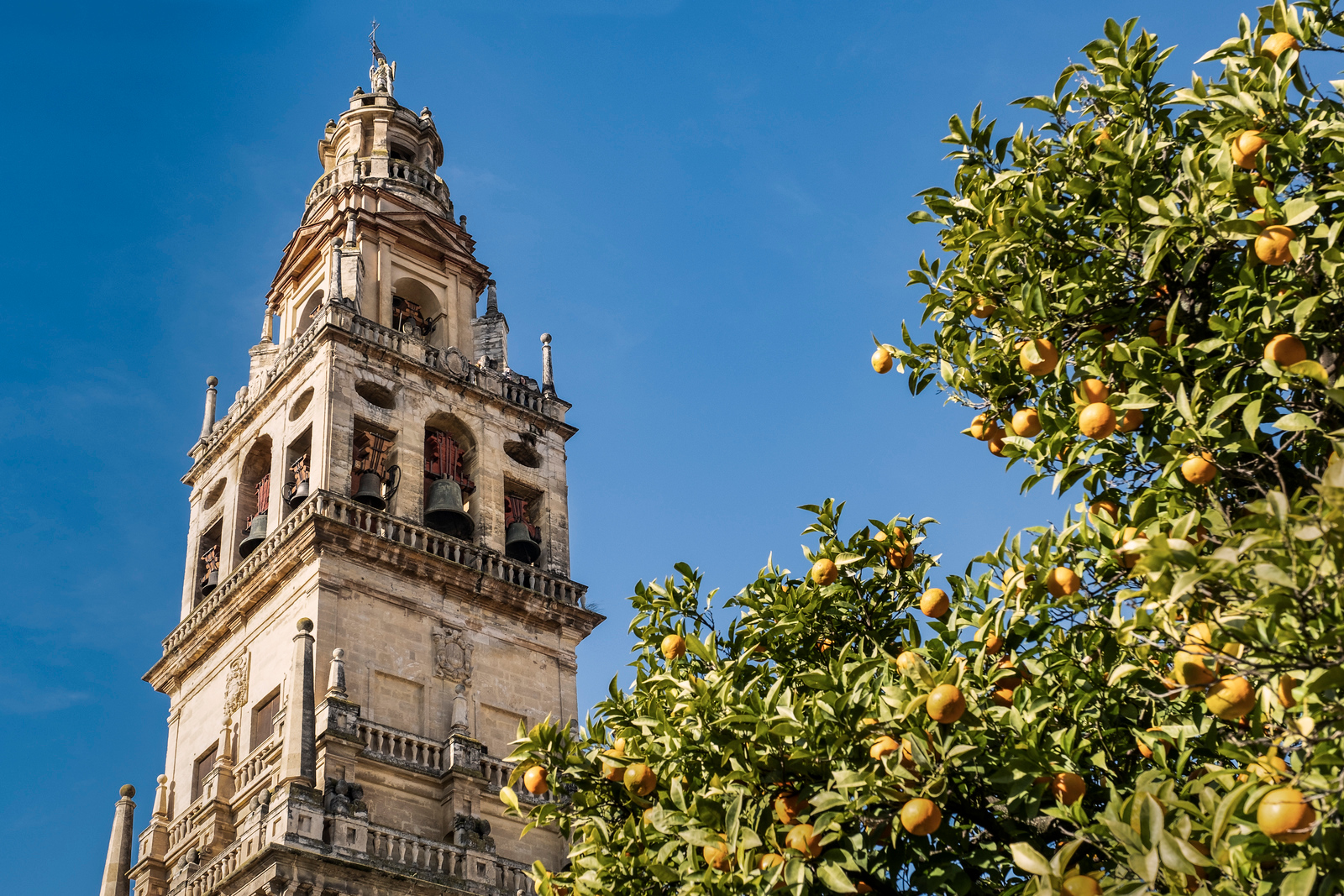 Through the Patio de los Naranjos, you can see the Bell Tower which, at 54 metres, makes it the tallest building in the city. From the original Muslim minaret to the current Bell Tower, this structure has played an important role in the image and profile of Córdoba. Alas, we didn’t have time to head up to the tower…

Door of the Palms was originally called the Blessings Arch as it was the place where the blessing of the royal banner took place as part of the coronation ritual for each new monarch. 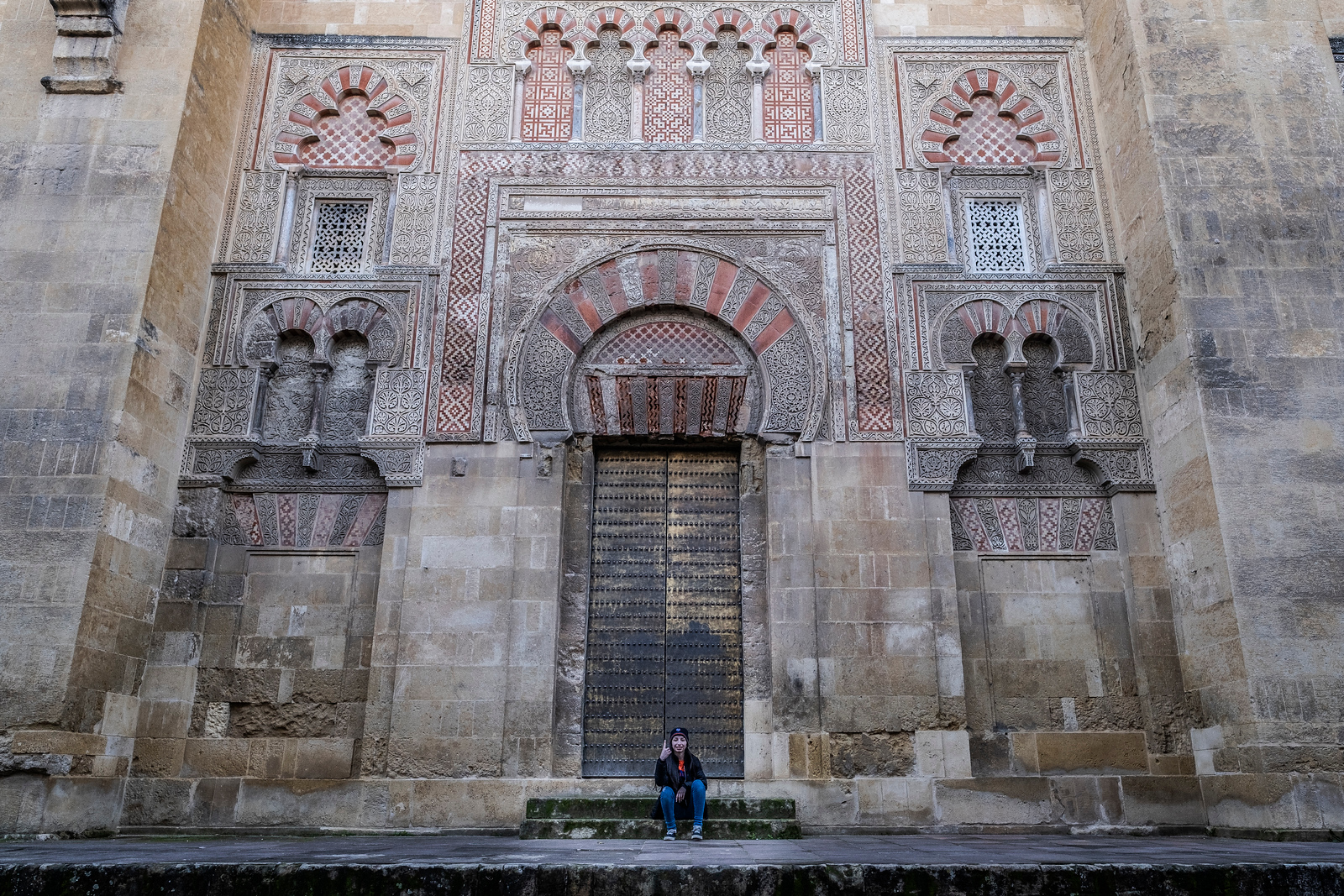 One of the gates to the Mosque–Cathedral, located right outside our hotel, the Eurostars Conquistador – a lovely hotel located right in the heart of Córdoba’s Old Town.

Gonna call it a post at this point but don’t think I’m done with Córdoba just yet. The next post will feature images from the Alcázar de los Reyes Cristianos, Roman Bridge and Judería (Old Jewish Quarter) so why not scroll down the page a bit and subscribe. I mean, all the cool kids are doing it. You won’t be sorry. Promise.

Oh, and this is just a sampling of images, check out the FULL GALLERY HERE

The full set of images are all also available for purchase (prints, wall art, desk art, phone cases, etc) on my SmugMug page

Special thanks to the folks at Fujifilm for the great rental price on the Fujifilm X-T3. This is a wonderful camera for traveling. Light, comfortable to hold, great in low light and a snappy autofocus. Besides the camera, I had the 16-55 f/2.8, 56mm f/1.2, 16mm f/1.4, and 50-140mm f/2.8 lenses. Also grateful for my Lowepro SlingShot 102 Camera Bag which has been my faithful companion for the past 7+ years, and the Joby GorillaPod 3K Flexible Mini-Tripod. I also gotta tip my hat to my KEEN® shoes (I have the Finlay Oxfords). I mean, walking on cobblestone streets all day is tough on your feet. I had brought along a pair of Skechers Memory Foam Shoes as well as my adidas Cloudfoam sneakers. Neither of them even came close to my KEEN® shoes as far as comfort. If you plan to walk around Europe’s rough cobblestone streets, these rugged shoes won’t let you down. Nuff said.

Written By DanPerezPhotography On February 17, 2019