One of Mexico’s Best-Kept Secrets: The City of Querétaro (In Pictures)

If you’ve been following this blog, you’d know that my daughter and I traveled to Mexico back in May. We spent two weeks in several cities, starting in Mexico City (pics HERE) and visiting its Historic Center, the Museo Nacional de Arte (pics HERE) and Teotihuacán (pics HERE). The plan was to head west to San Miguel de Allende but I wasn’t looking forward to the four-hour ride so a travel blog recommended a stop-over at a city called Querétaro. Never heard of it. What I would find out, however, is that Santiago de Querétaro is one of the most dynamic cities in Mexico, and still one of its best kept secrets.

Known simply as Querétaro, it is located in central Mexico, about 132 miles northwest of Mexico City. The area of Querétaro was settled around A.D. 200 by Mesoamerican groups moving north. In the later pre-Hispanic period, the area was populated by the Otomí (Indigenous peoples of Mexico) and for the next several centuries, the Otomí (and to a lesser extent, the Tarascan and Chichimeca) were the ruling tribes in the region. In the mid-13th century, the region was conquered by the Aztecs and in 1521, the Spanish arrived in Mexico and soon conquered indigenous populations all over the country. The city of Santiago de Querétaro was officially founded on July 25, 1531.

Today, Querétaro’s low crime rate and high standard of living have made it an attractive place for immigrants and investors. The city is the fastest-growing in the country, hosting major corporations like Kellogg’s, Samsung Electronics, Daewoo, Colgate-Palmolive and General Electric. Querétaro is also the second largest wine producer in Mexico after that of the Baja California region. Moreover, the Historic Center of Querétaro was declared a World Heritage Site by the UNESCO in 1996.

You can take a bus from Mexico City to Querétaro but I just went with an Uber (cost me about $80 US) being that we were running a bit behind and I wanted to get in before it got too late in the day. We stayed in one of the most charming hotels I’ve ever stayed in, La Casa del Atrio right in the heart of Querétaro’s historic center (more about this at the end of post). That’s where my series of photographs will begin so let’s get right to it, yes?

El Monumento al Danzante Conchero Chichimeca, a bronze sculpture by Mexican artist Juan Francisco Velasco y Perdomo, dedicated to the preservation of the Concheros dance, an important traditional dance and ceremony which has been performed in Mexico since early in the colonial period.

In the center of downtown is the Temple and ex-convent of San Francisco de Asís de Querétaro (Templo y exconvento de San Francisco de Asís de Querétaro), also known as San Francisco Church, which dates back to its origins in 1550, although the temple was completed in 1640. It was the first religious building that was built in Querétaro and became the center of the most important urban development in New Spain. The temple functioned as a cathedral between 1865 and 1922 and today the former convent houses the Regional Museum of Queretaro…

The Plaza de Independencia or Plaza de Armas is the oldest part of the city. The tree-lined, cobblestone streets are surrounded by outdoor restaurants and colonial mansions. In the middle of this plaza is a fountain that honors Juan Antonio de Urrutia y Arana, who built Querétaro’s large aqueduct to bring water to the city (alas, we didn’t get a chance to visit the aqueduct)

The Museo de Arte (Museum of Art) is located in the former monastery of San Agustin, which was occupied by Augustine friars starting in 1743. The building is considered one of the major Baroque works of art in Mexico. The museum contains one of the most important collections of colonial-era art and is organized by painting style. 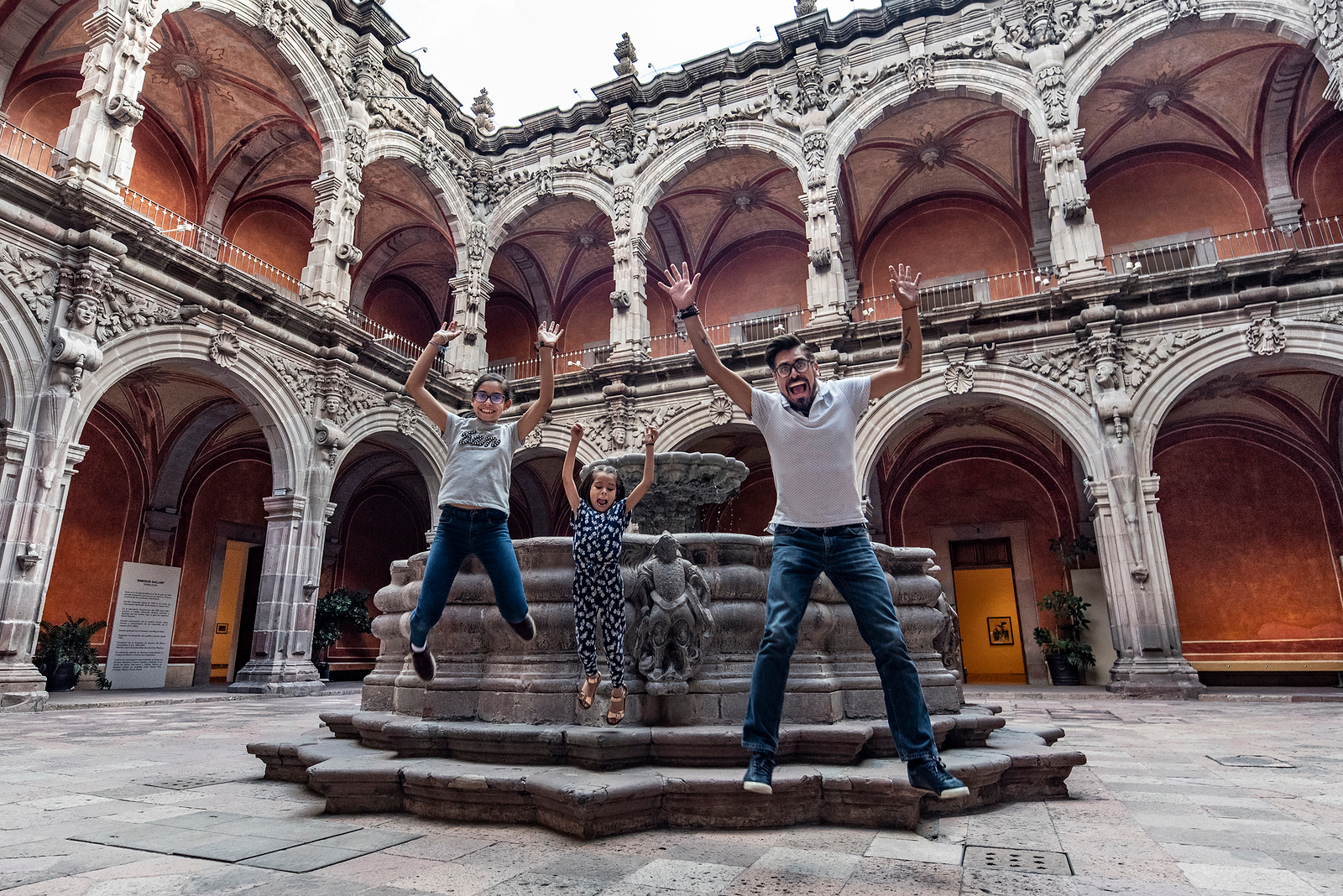 In the arches and columns that surround the stunning inner courtyard of the museum, I saw this father attempting to take photos of his two daughters jumping from the fountain in the courtyard with his iPhone. I asked if I could take the same photograph with my camera but with him in it. He agreed. Here’s the photograph, which I sent him via email when I got back home. This one’s for all the dads (and moms) behind the camera.

Me and my grrrl at the Plaza de los Fundadores. It is here where the city was founded in 1531. The plaza was built in 1981 to commemorate the 450th anniversary of the founding and conquest of the city…

The Church and Convent of Santa Cruz was built between 1654 and about 1815 on the site of a battle in which a miraculous appearance of Santiago (St James) apparently led to the Otomí surrender to the Spanish conquistadors and Christianity on the morning of July 25, 1531. It is still an active convent…

The infamous Casa de la Zacatecana (The Zacatecana House) tells the story of wealth and murder; namely the wealthy owner of the house, Sr. Antonio Origel, by his wife. The house has been restored as a museum to show what many of these mansions were like in colonial-era Querétaro.

Jardín Guerrero is located in a beautiful plaza dedicated to Vicente Guerrero Saldaña (1782-1831), one of the leading revolutionary generals of the Mexican War of Independence… 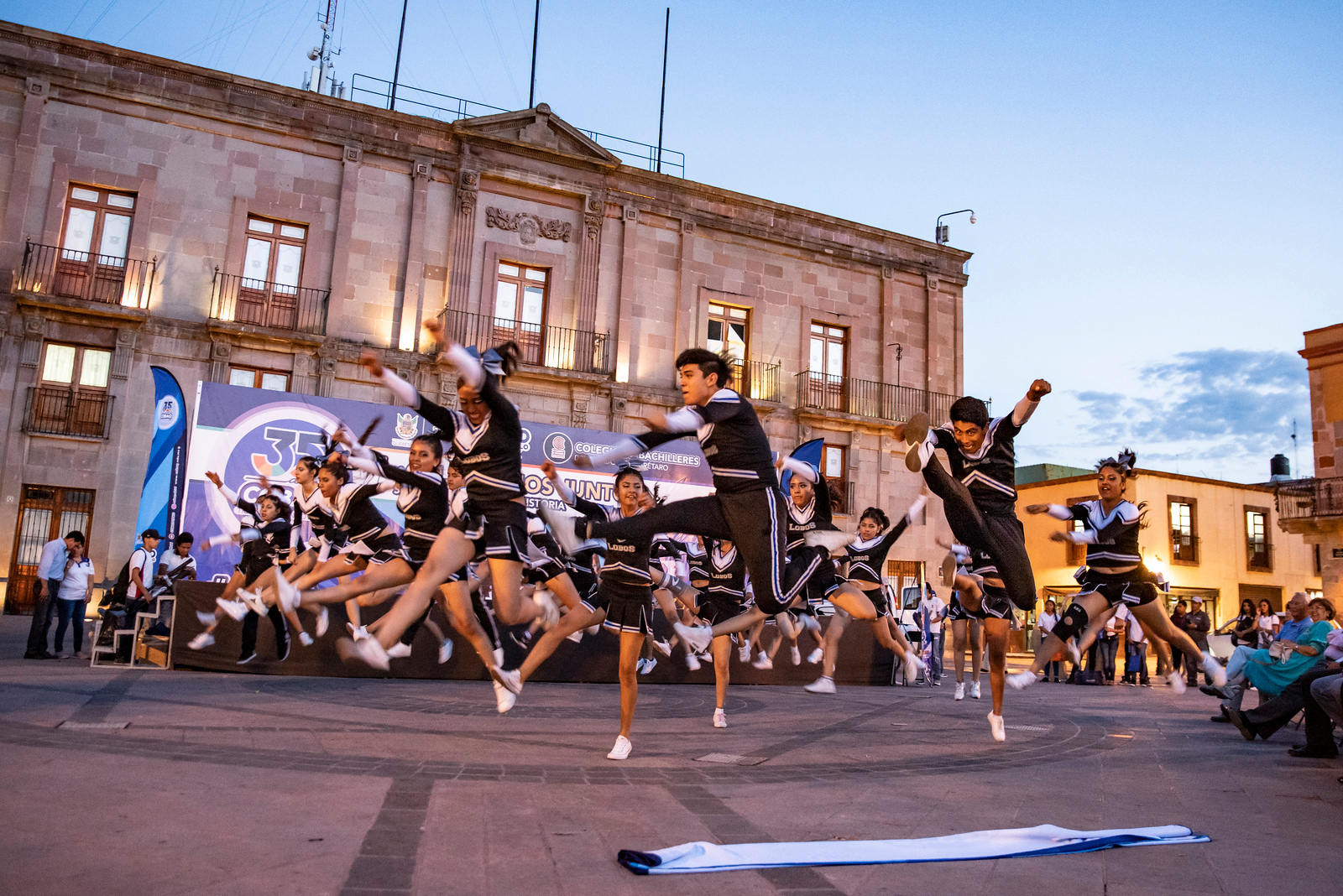 At the end of the day, a free talent show for the locals by the plaza adjacent to the Jardín Guerrero. A perfect way to end our stay in this lovely city.

La Casa del Atrio is a Boutique Hotel located at the heart of Queretaro’s Centro Histórico, inside an old XIX century mansion. Right at the entrance of the hotel there is an Art Gallery and Antique Store where you will find some interesting, quirky and rare pieces of art. Short walking distance to all major attractions, spacious rooms, the best wifi service of any hotel we stayed in Mexico, breakfast made to order, and we were treated like family as soon as we checked in. Can’t recommend this place strongly enough – we hated leaving. Nuff said.

It helped that it was right next door to our hotel but Tikua Sur-Este might just have been the best restaurant we ate in during our whole trip to Mexico. It ain’t street food for a few pesos (a good meal for two with drinks will run you over $100 US) but man was it worth it. Fantastic food and service, and live music. We ate there both nights – would have eaten there again had I stayed another night.

Querétaro was such a pleasant surprise and such a lovely city. Wish I had stayed at least another day as there were plenty of sites we didn’t get to see. You can learn more about what this dynamic city has to offer by visiting www.queretaro.travel. We’ll be back one day for sure. Check out the FULL GALLERY of images on my SmugMug site.

As for photographs from our May trip to Mexico last month, I’m still just getting started. Next up are the UNESCO World Heritage cities of San Miguel de Allende, and Guanajuato, arguably the two most beautiful cities in Mexico (they’d better add Querétaro to that list!). So SUBSCRIBE HERE and join all the other cool kids who have already done so.

Photographs taken with my Pentax K-1 using the Pentax 24-70mm f/2.8 and the Irix 15mm f/2.4. Supported by the Spider Camera Holster SpiderPro Hand Strap (a must for the weighty K-1) and carried around in the Lowepro Slingshot Edge 250 camera bag..

CHECK OUT MY OTHER PHOTOGRAPHY POSTS FROM OUR TRIP TO MEXICO

Written By DanPerezPhotography On July 9, 2019

The Holy City of Teotihuacán, Mexico City (In Pictures)