If you’ve been following this blog (and why wouldn’t you be? SUBSCRIBE HERE), you’d know that my daughter and I traveled to Mexico for two weeks back in May. It was originally planned as a trip to the dentist to get an implant put in. I mean, I was being charged over $5,000 for an implant here in South Florida – do you know how many cool lenses I can buy for that type of dough? Seriously. So, after lots of online research and reviews, I set up an appointment at Ideal Dental in Mexico City where I was charged $1,400 for the implant (phase one was a success – no pain or swelling). If you factor in the $250 round-trip flight from South Florida, I made out pretty good (still need to return in a few months to get the crown put in but I’m still coming out way ahead).

Then I started thinking, why waste a trip to Mexico with just a visit to the dentist? So I stretched it out from five days to two weeks. We started off in Mexico City where we visited its bustling Historic Center (pics HERE), the stunning Museo Nacional de Arte (pics HERE) and the holy city of Teotihuacán (pics HERE). From Mexico City, we took an Uber about 130 miles NW to the charming city of Querétaro (pics HERE) before heading to our next destination, San Miguel de Allende.

Some 50+ miles northwest of Querétaro (and about 170 miles NW of Mexico City) is what many people call Mexico’s most beautiful city, San Miguel de Allende. The city’s name derives from two persons: 16th-century friar Juan de San Miguel, and Ignacio Allende, a captain of the Spanish Army in Mexico who came to sympathize with the Mexican Independence movement, eventually leading the rebellion and becoming a martyr.

Before the arrival of the Spanish in the early 16th century, San Miguel was an indigenous Chichimeca village called Izcuinapan. The town thrived in the mid-16th century after silver had been discovered in the region. Serving travelers’ needs and providing supplies to mining camps made the town rich. At that time, it was one of the most important and prosperous settlements in New Spain with a population reaching 30,000. 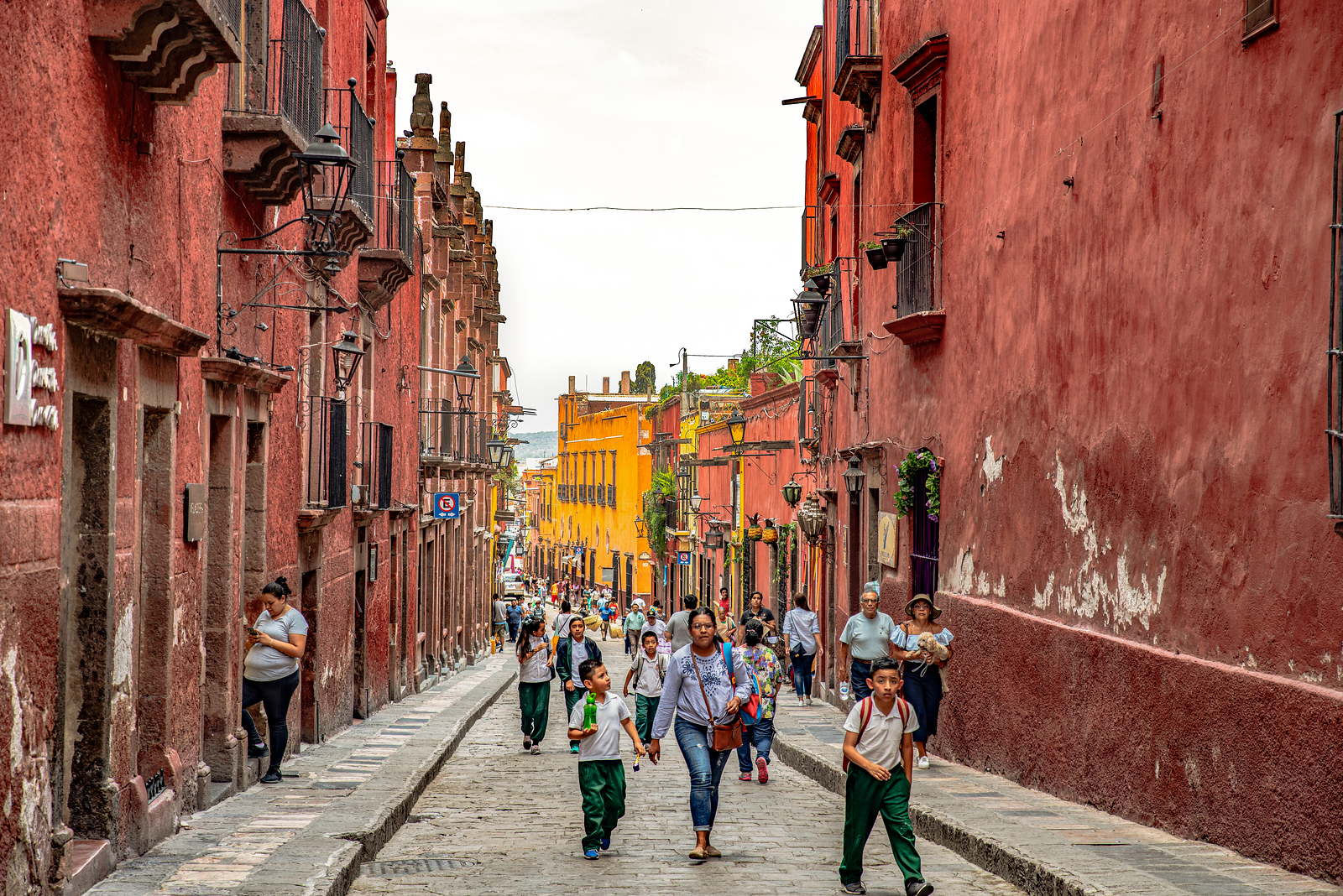 The prominence of the city declined at the beginning of the 19th century, mostly due to the Mexican War of Independence and the end of mining. By the beginning of the 20th century, San Miguel de Allende was in danger of becoming a ghost town. That is until American artist and writer Stirling Dickinson arrived in 1937. Dickinson created the first wave of advertising abroad about San Miguel’s virtues. Along with Peruvian author and painter, Felipe Cossio del Pomar, he established an art colony and school, the Escuela de Bellas Artes. Gradually, the city’s Baroque/Neoclassical colonial structures were “discovered” by foreign artists who began moving into the city. This gave San Miguel de Allende a reputation, attracting artists such as social realist painter David Alfaro Siqueiros, who taught painting there.

This, in turn, attracted foreign art students, especially former U.S. soldiers studying on the G.I. Bill after World War II. Since then, the town has attracted a significant number of foreign residents and retirees from the United States, Canada, and Europe; attracted by the mild climate, cultural opportunities, and low crime. Estimates of foreign residents range from 20,000 to 25,000, with at least half of these from the United States. Much of the municipality’s economy is tied to the influx of tourists and expats.

For the fourth year in a row, Travel + Leisure magazine chose San Miguel de Allende as the 2019 top city travel destination in Mexico. In the magazine’s “World’s Best” rankings, which are chosen by surveys of over 17,000 Travel + Leisure readers, San Miguel placed second in the 2019 World’s Best Cities section after having won World’s Best City in 2017 and 2018(!). The magazine describes San Miguel as “a glamorous and sophisticated city in the heart of Mexico, surrounded by wonderful vineyards and beautiful landscapes to do some adventure tourism without losing its traditional touch.” Oh, and UNESCO designated the Protective town of San Miguel a World Heritage Site in 2008.

I spent a few days there with my daughter this past May. And my guess is you’re probably wanting to know, was San Miguel de Allende up to the hype? I’ll let the photographs speak for themselves… 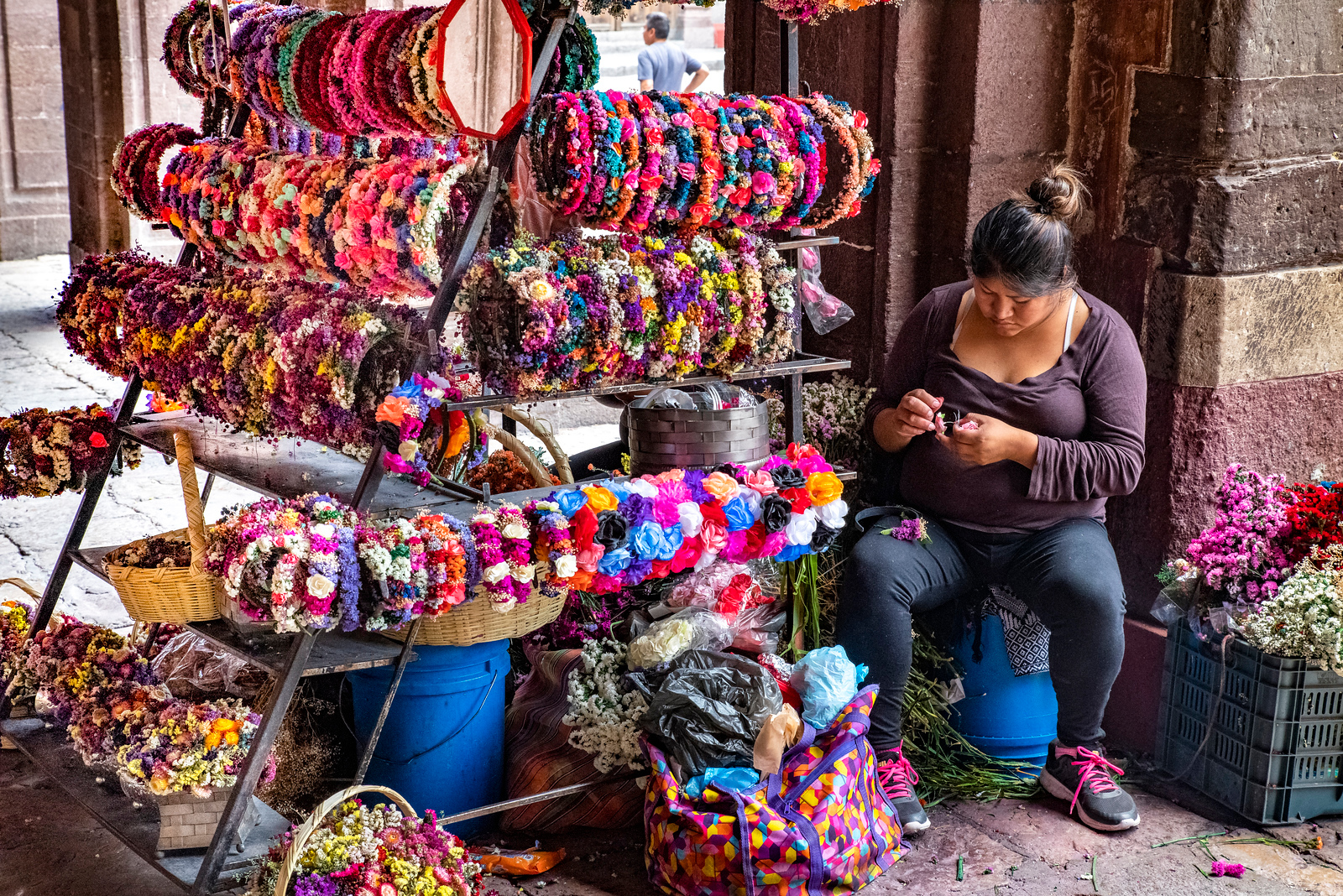 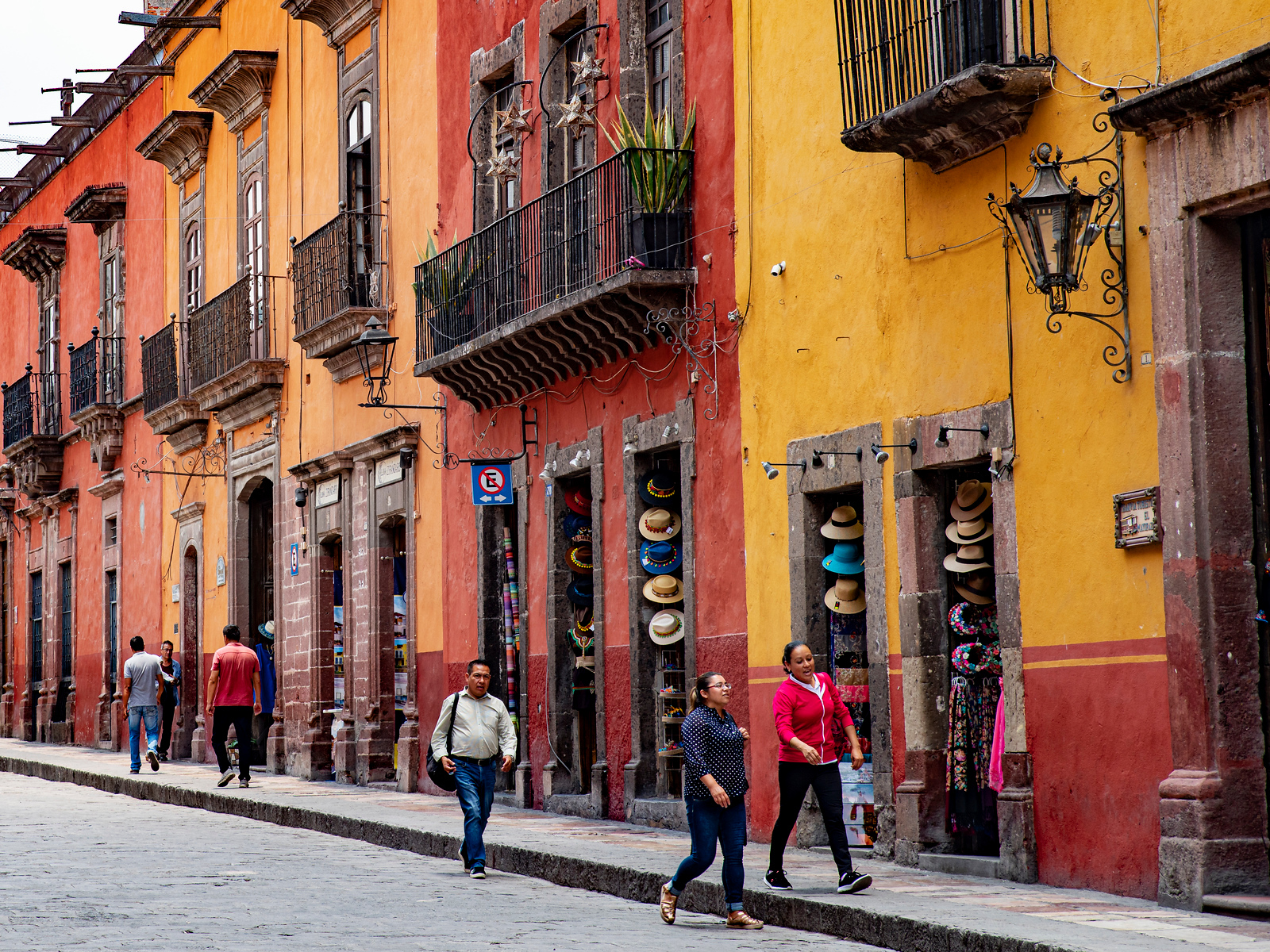 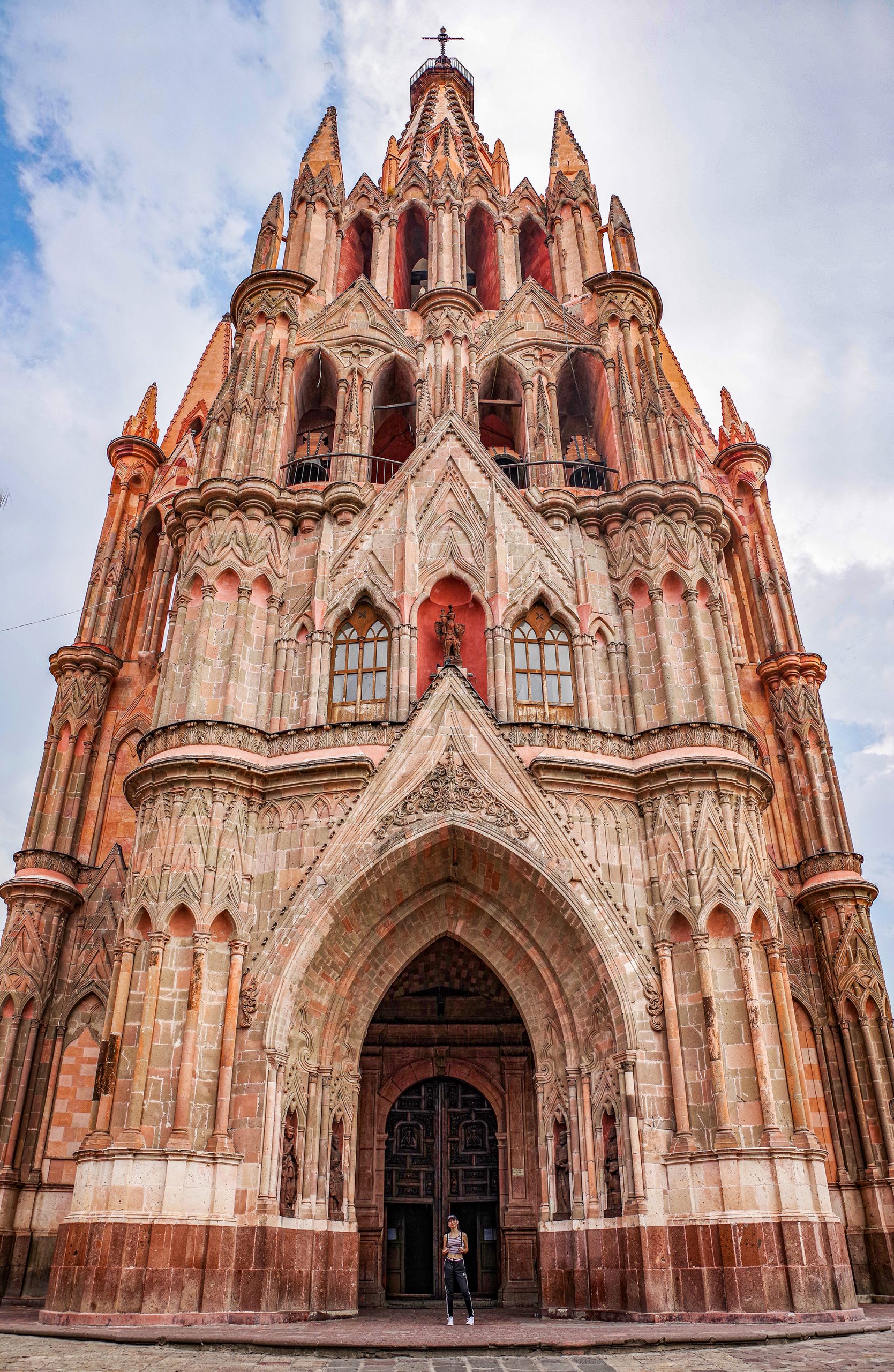 The two tall towers of the neo-Gothic façade of La Parroquia de San Miguel Arcángel can be seen from most parts of town. The church was built in the 17th century with a traditional Mexican façade but over time, dangerous structural failures became evident as the walls began to crack. The current Gothic façade was constructed in 1880 by Zeferino Gutierrez, an indigenous bricklayer and self-taught architect. Based on engravings of the Cologne Cathedral in Germany, which the bricklayer zealously kept at home, he began to build a whole new neogothic façade. To fulfill his idea, he extracted pink quarry from the skirts of the extinct Palo Huérfano volcano, located about 5 kilometers south of San Miguel de Allende. Criticized and misunderstood by architects of the day, La Parroquia de San Miguel Arcángel has become one of the most-photographed churches in all of Mexico. 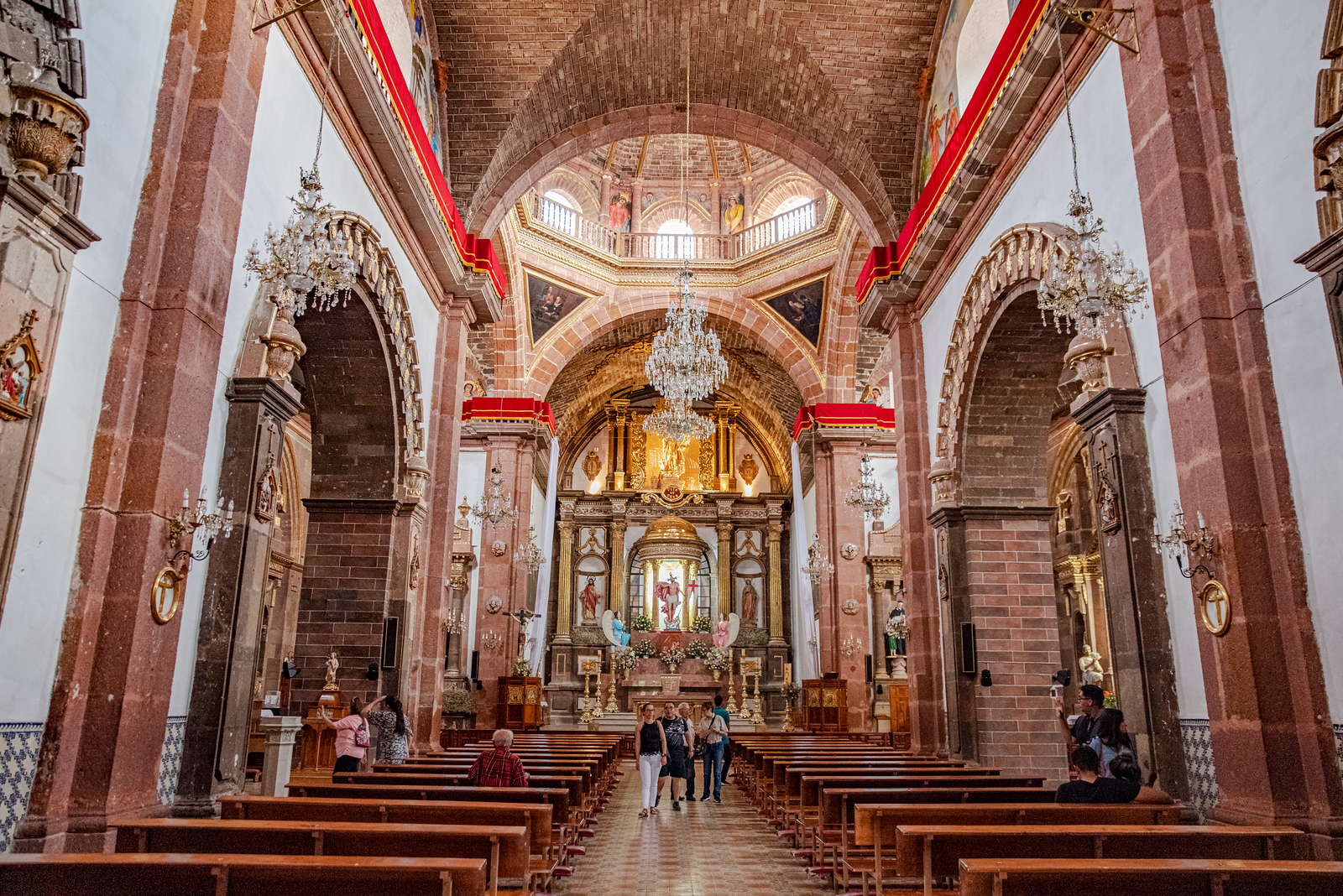 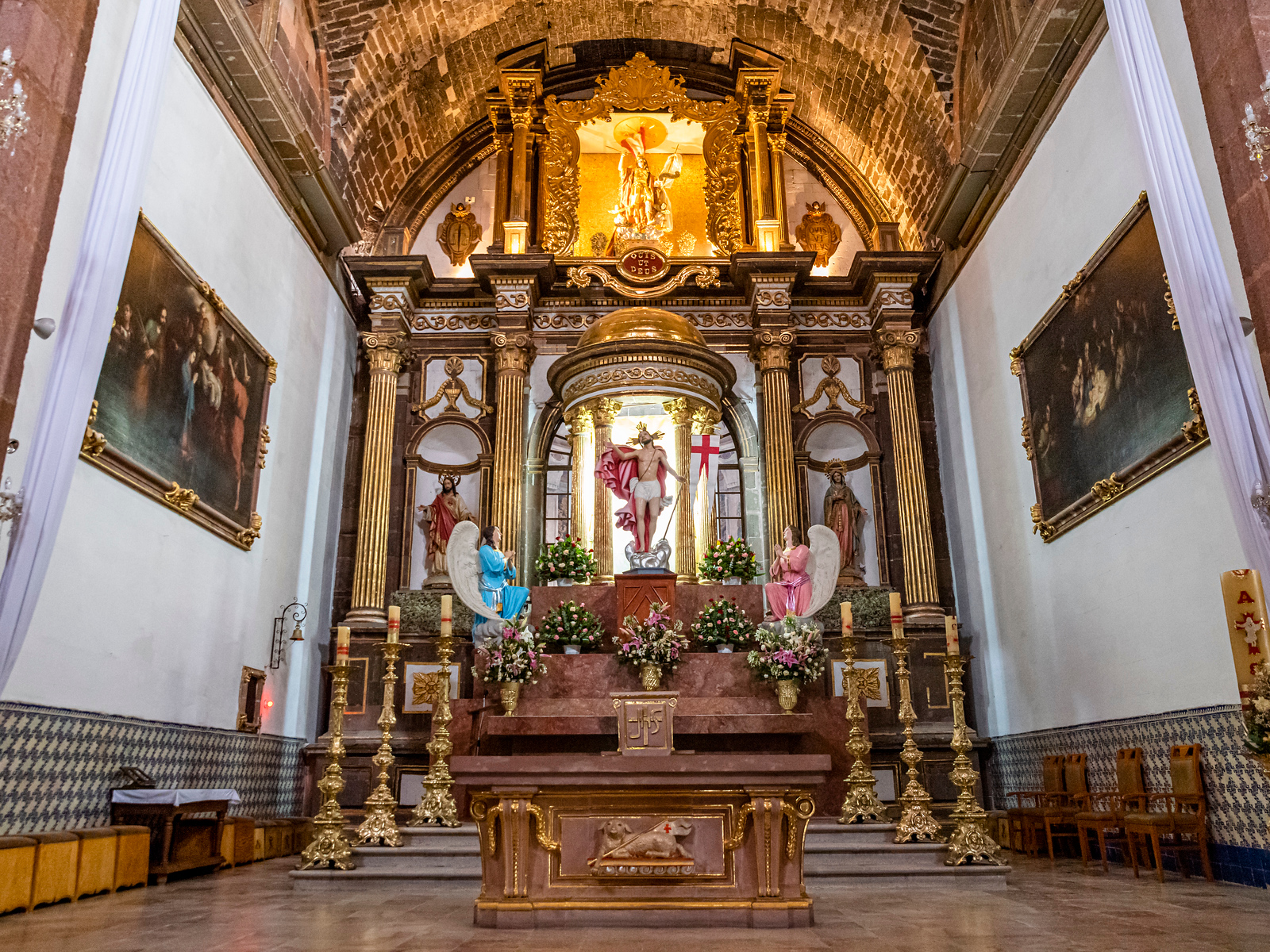 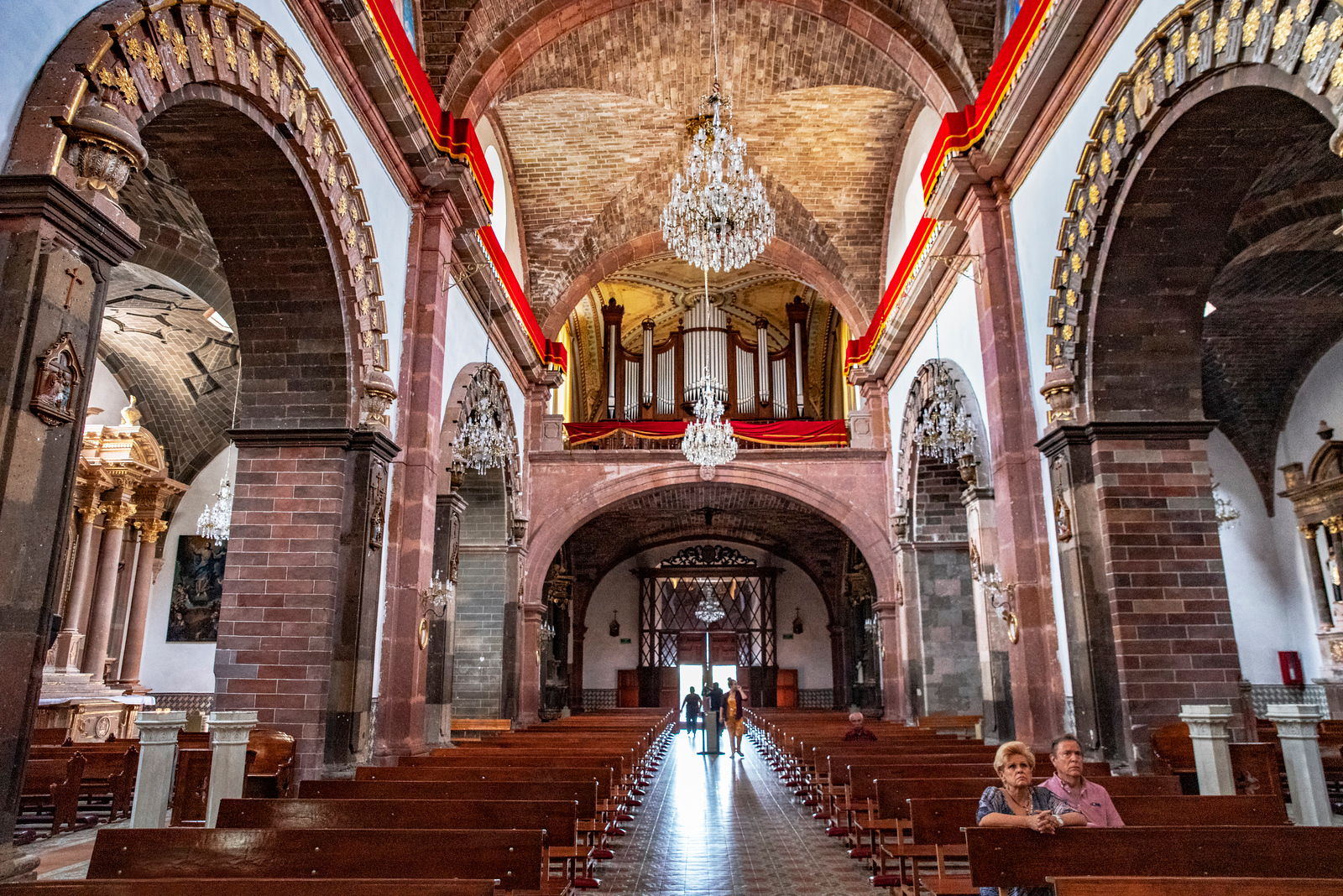 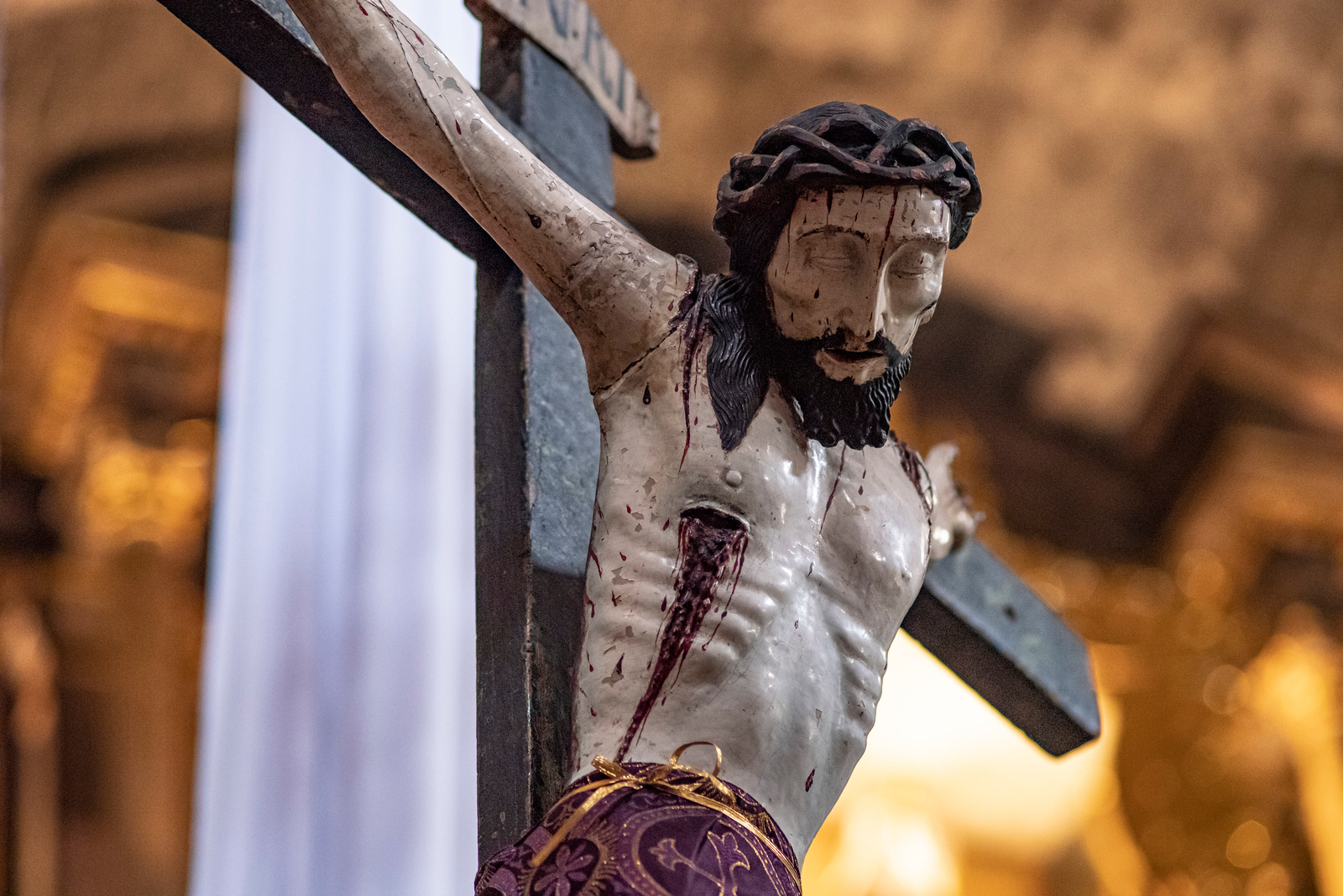 The interior of the church still has the original 17th-century layout and design, but the church was looted several times during Mexico’s history so much of its decoration is lost. Interior is still stunning… 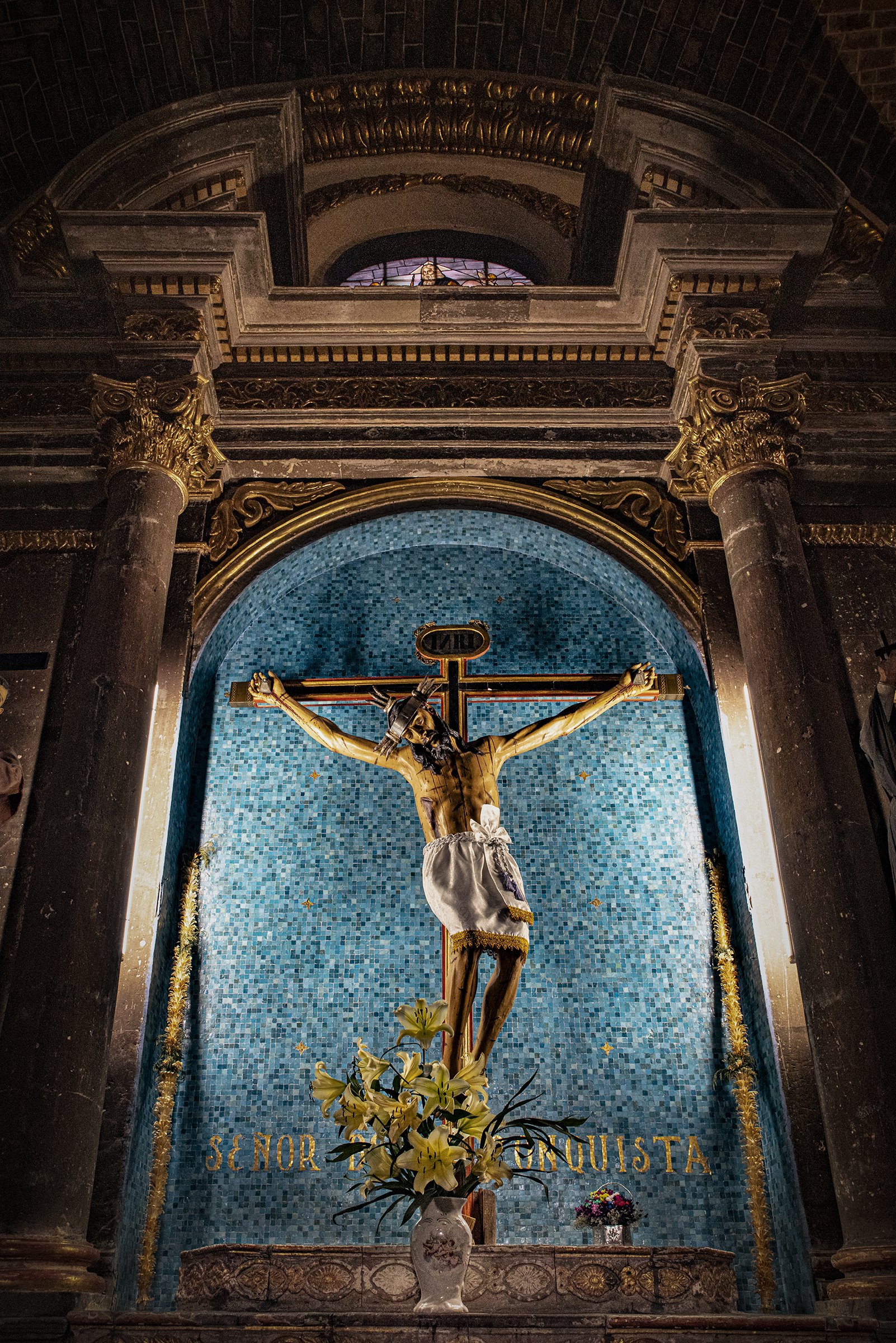 One significant image inside the parish is the “Señor de la Conquista”, which was made of cornstalk paste by indigenous people in Michoacán and dates back to 1535. It was being brought to San Miguel by two friars (accompanied by Spanish soldiers) who were ambushed and killed by the Chichimecas. A bloodied survivor of the attack brought the statue of Christ to San Miguel where he told the tale of what had happened then died of his injuries. Some claim that traces of his blood still remain on the statue.

Small sacristy to the left of the main altar contains a painting depicting the founding of the town in 1542 and its subsequent move to Izcuinapan in the El Chorro neighborhood.

The San Rafael or Santa Escuela Church is located to the side of the parish. It was founded by Luis Felipe Neri de Alfaro in 1742. 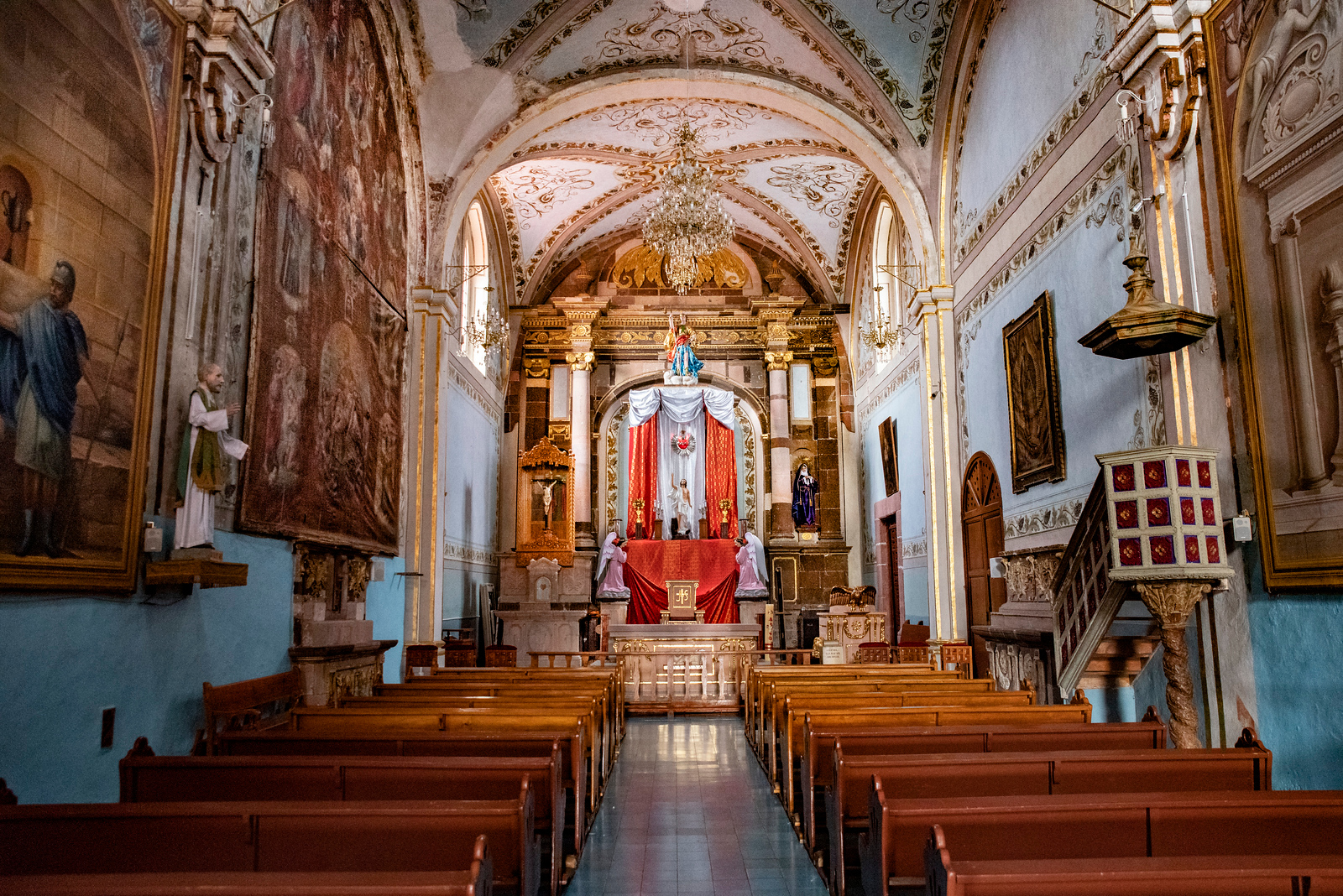 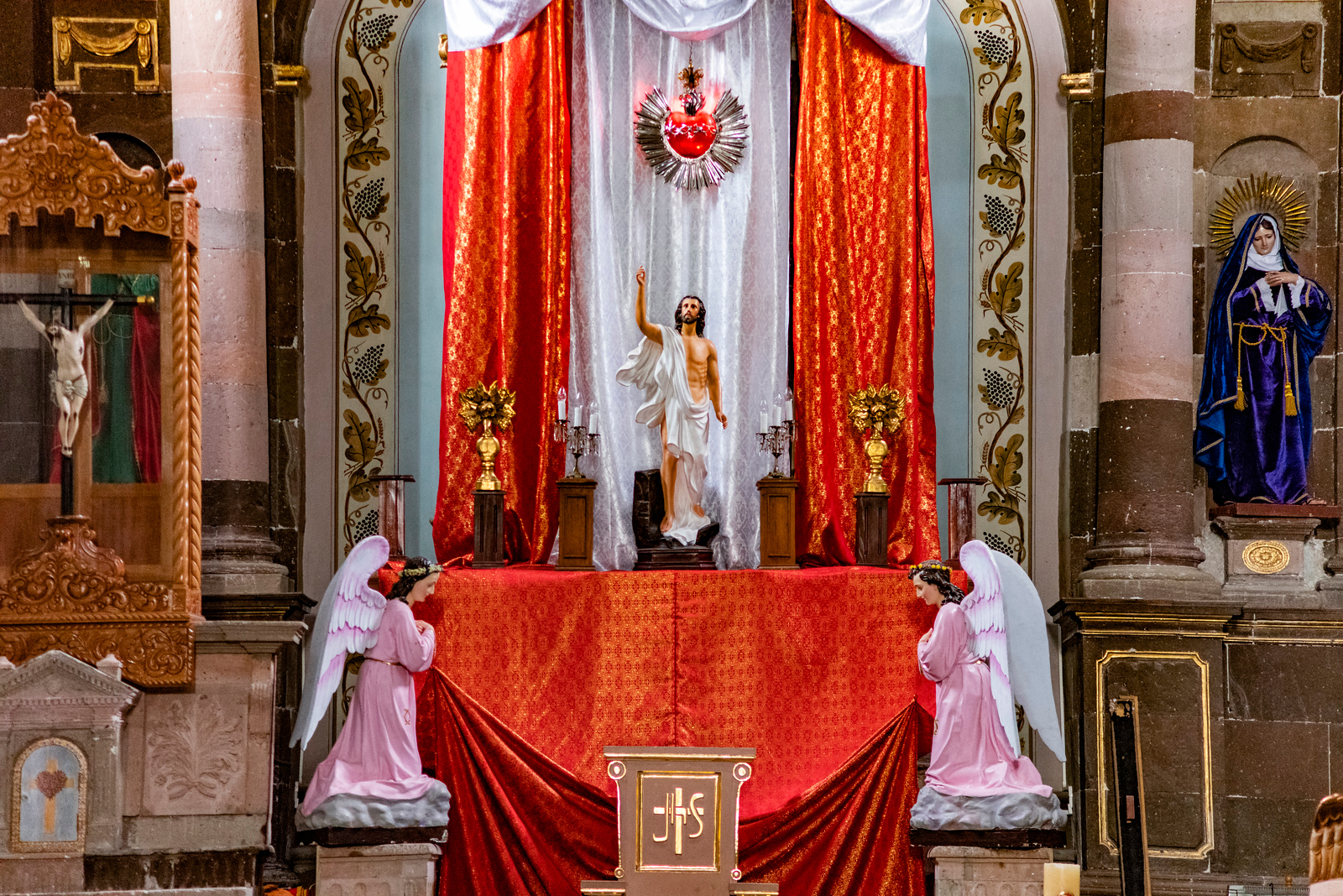 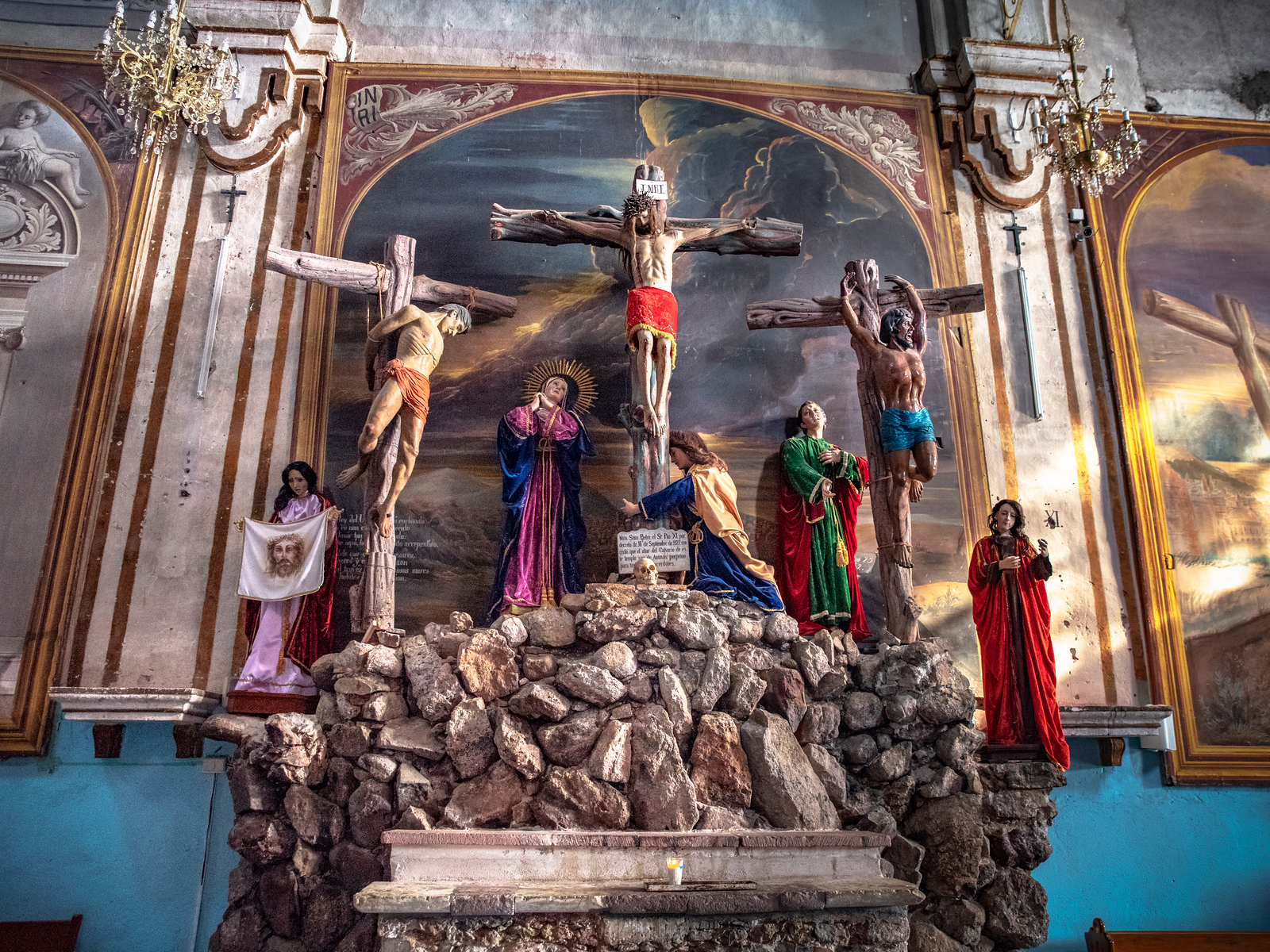 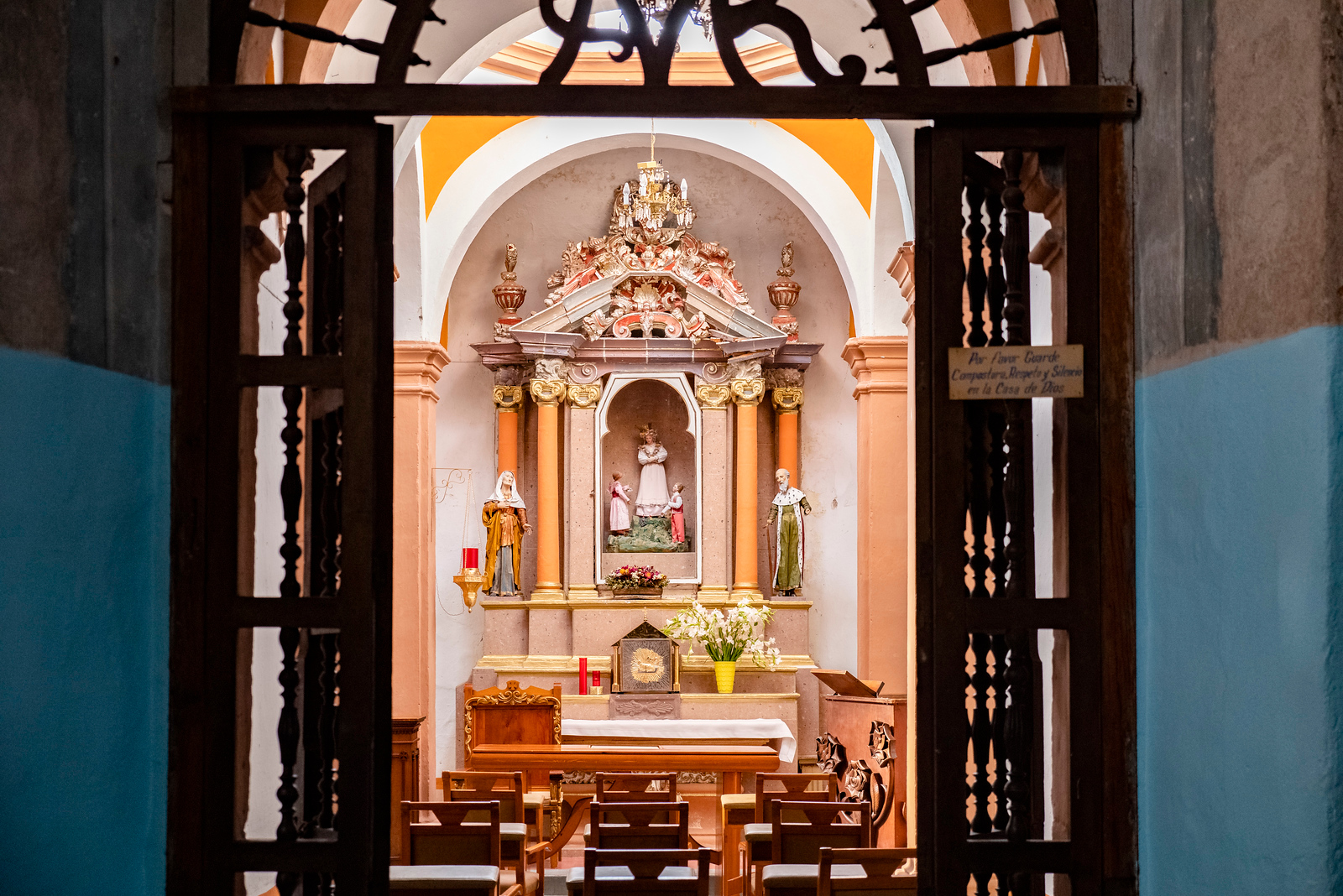 A peek inside San Rafael Church…

Corner of the Casa de Allende (Allende House) museum that was the home of Ignacio Allende, who was a principal figure in the early part of the Mexican War of Independence. The structure was built in 1759 with Baroque and Neoclassical elements and is located next to the San Miguel parish church. The corner is also a popular spot for photographs…

In front of the church complex is the Plaza Allende, popularly known as Jardin Principal (Main Garden), but most often referred to simply as “el jardin”. It was designed in French style, with wrought iron benches and filled with Indian laurel trees. 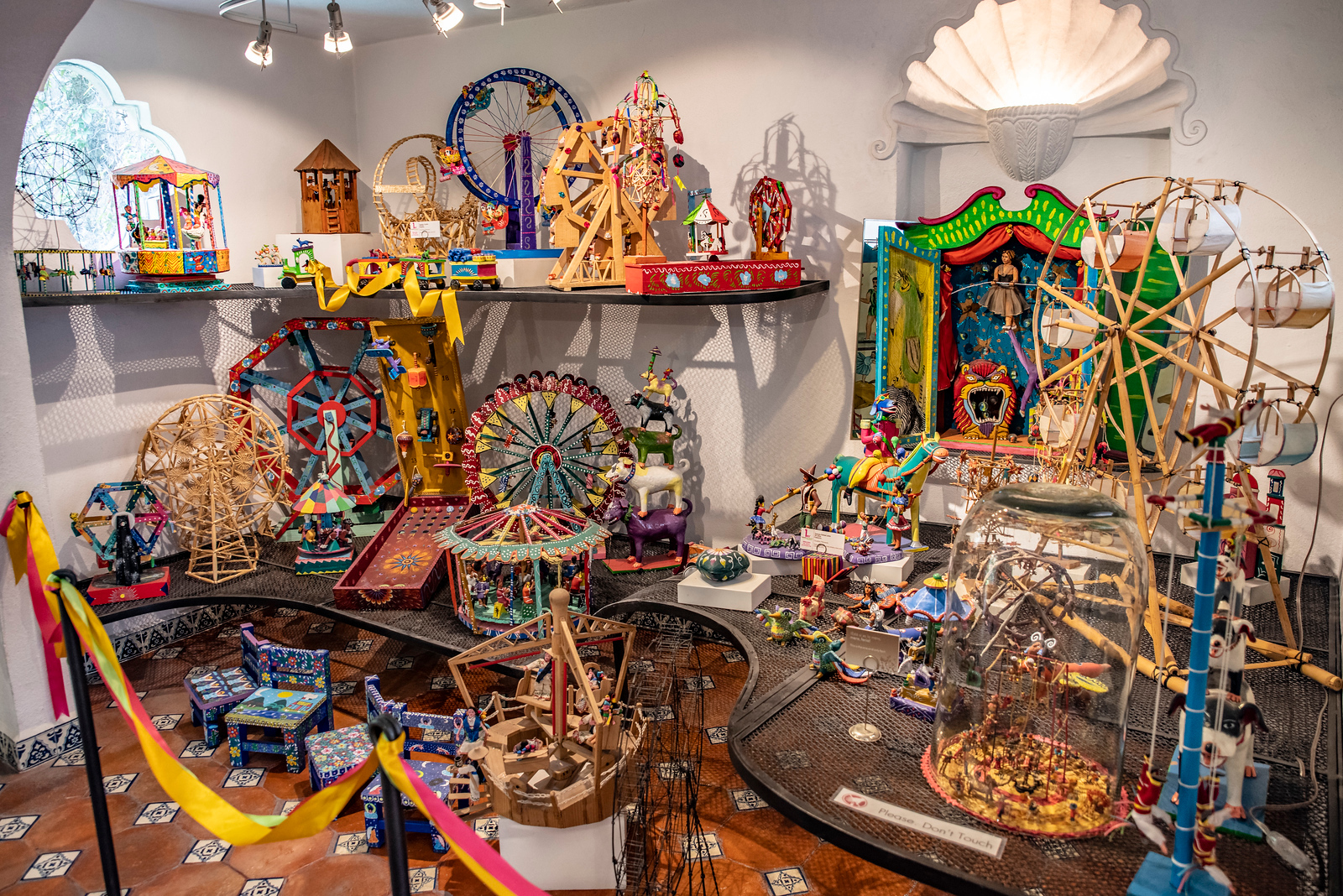 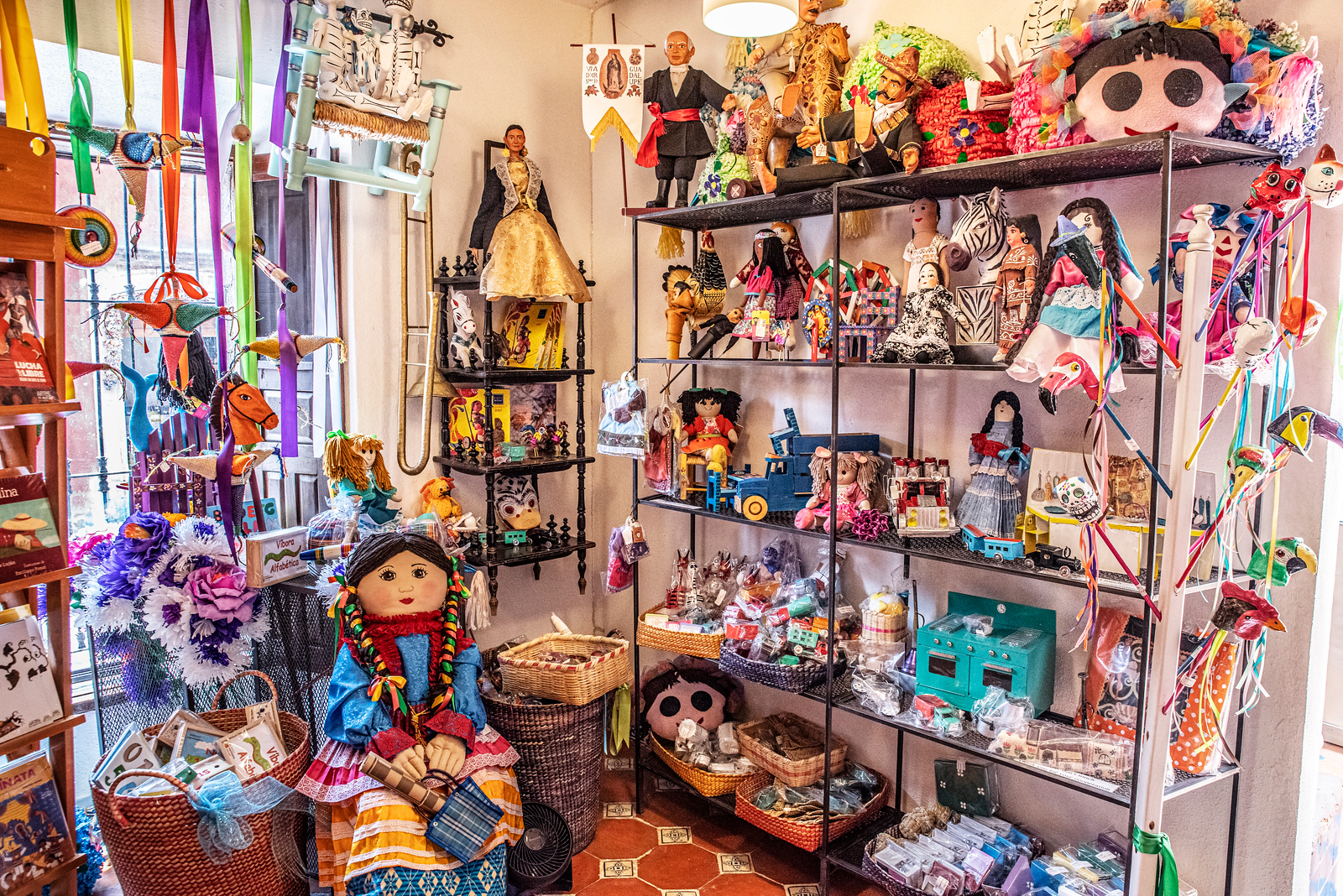 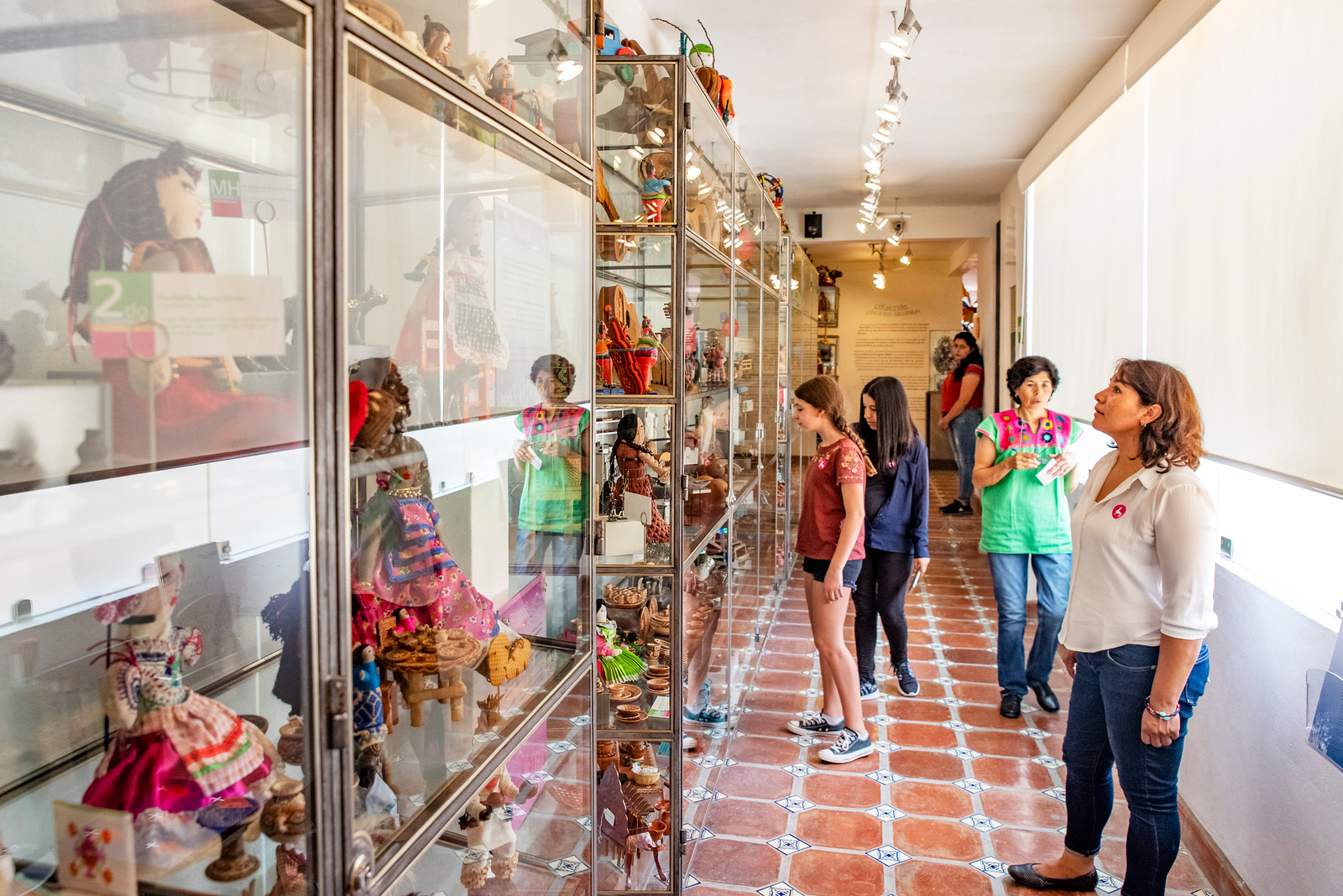 A short walk from La Parroquia de San Miguel Arcángel is Museo La Esquina toy museum, focused primarily on the preservation and celebration of Mexican toys. There are four rooms where toys are displayed and various regions are highlighted, starting with Guanajuato. Classes and workshops for children are offered. The unique museum is worth a visit and a great way to keep out of the outdoor heat for a few hours. 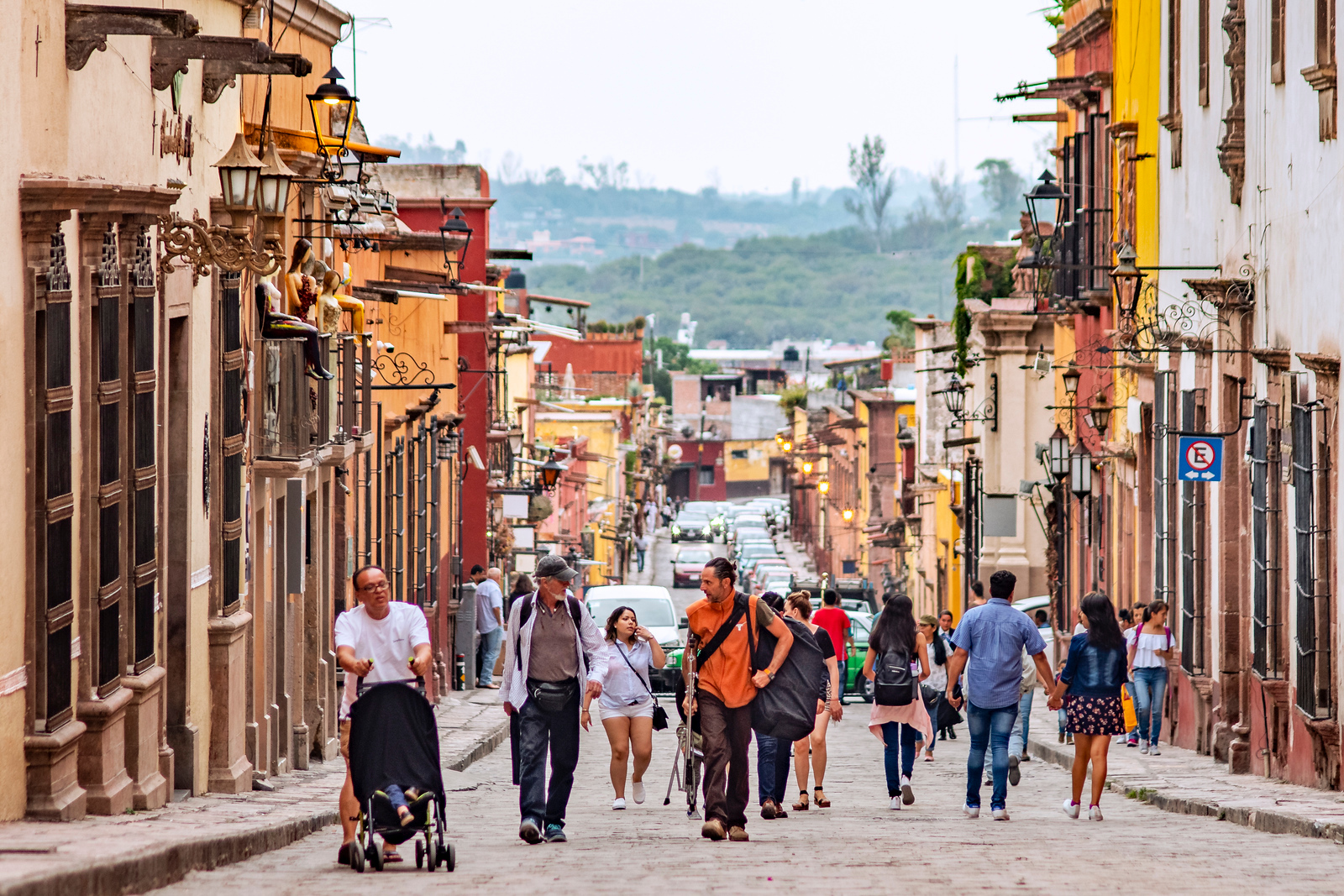 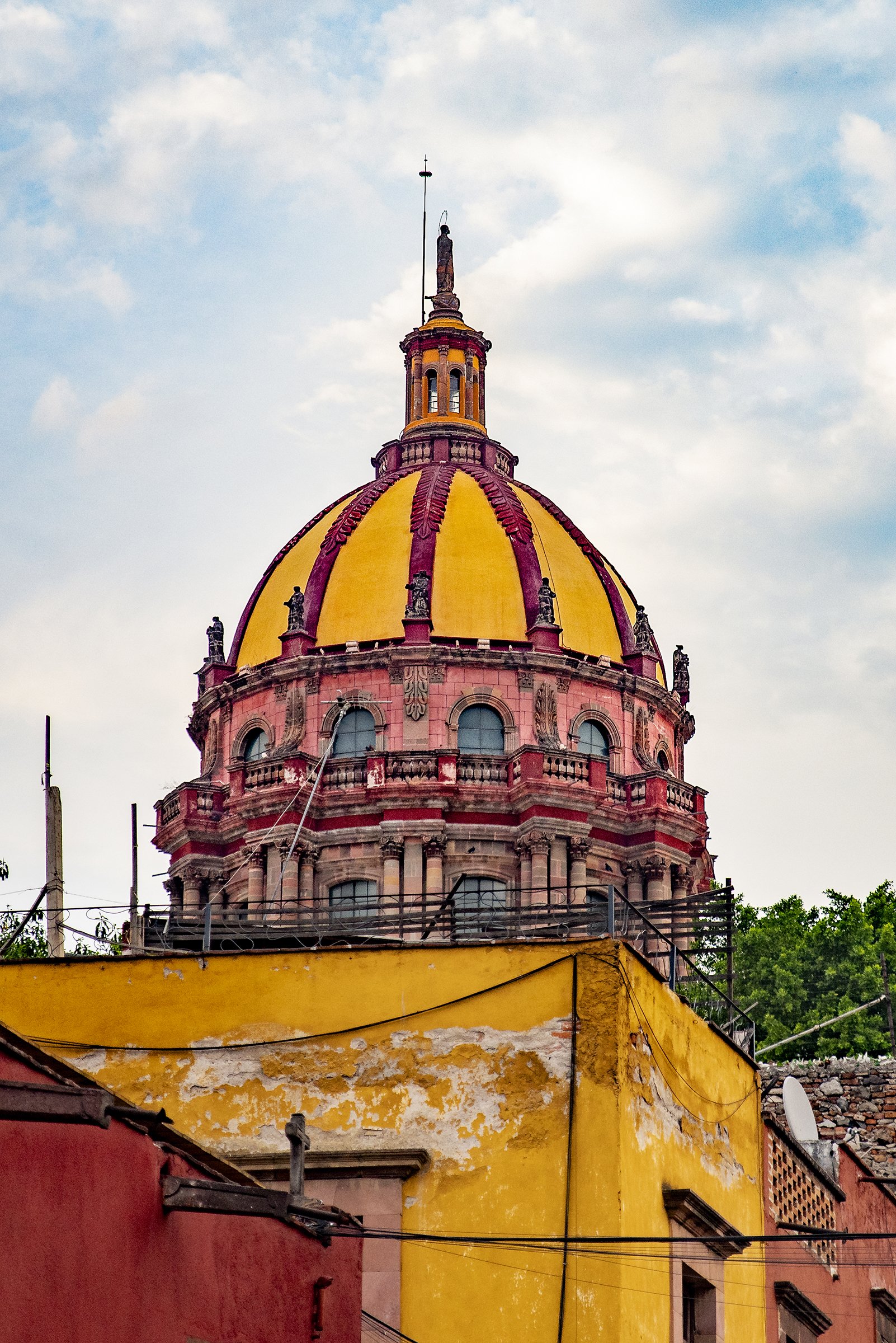 Street view of the dome of the Inmaculada Concepcion Church, locally known as “Las Monjas” (Church of the Nuns). The church was constructed between 1755 and 1842. 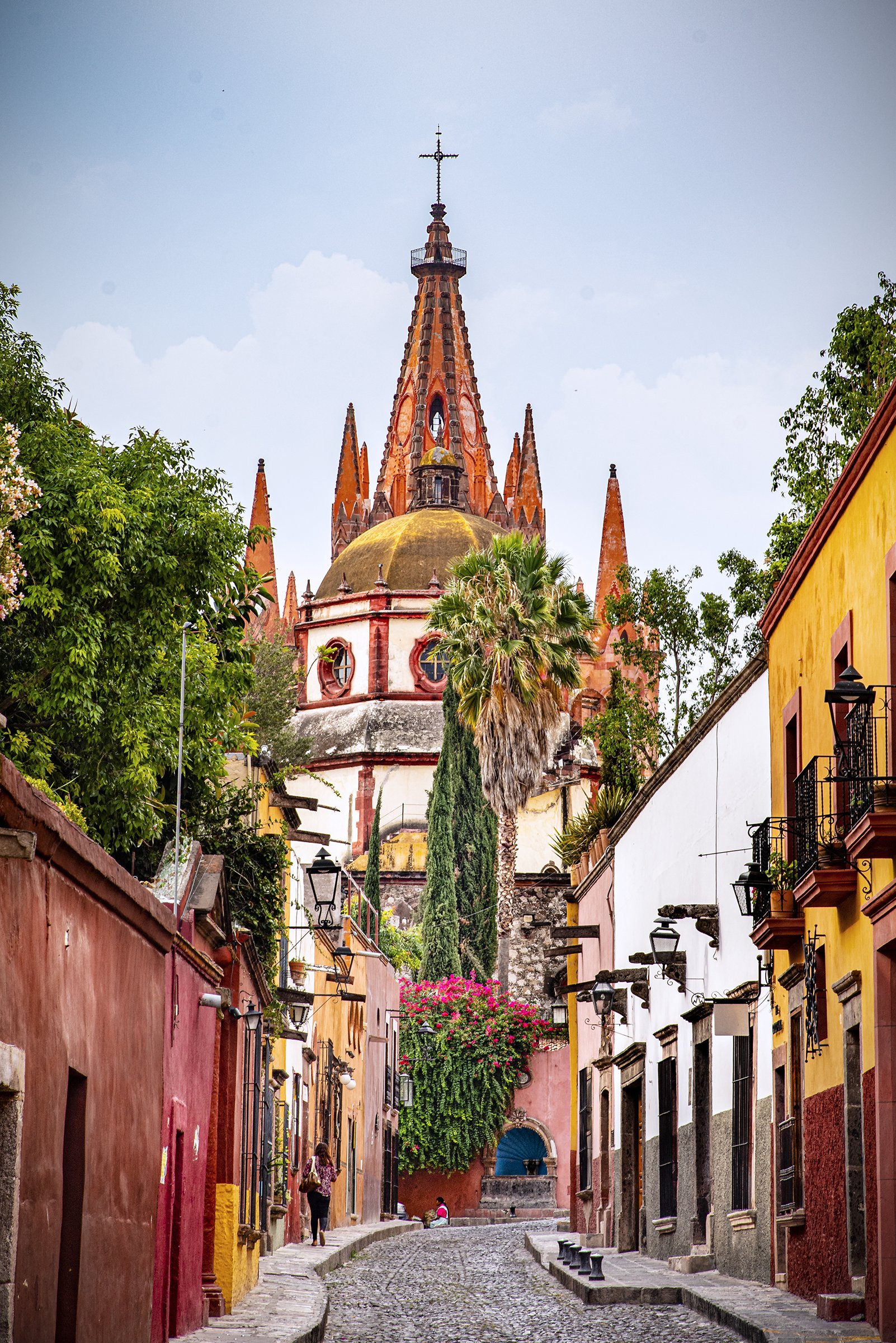 Making our way back to La Parroquia de San Miguel… 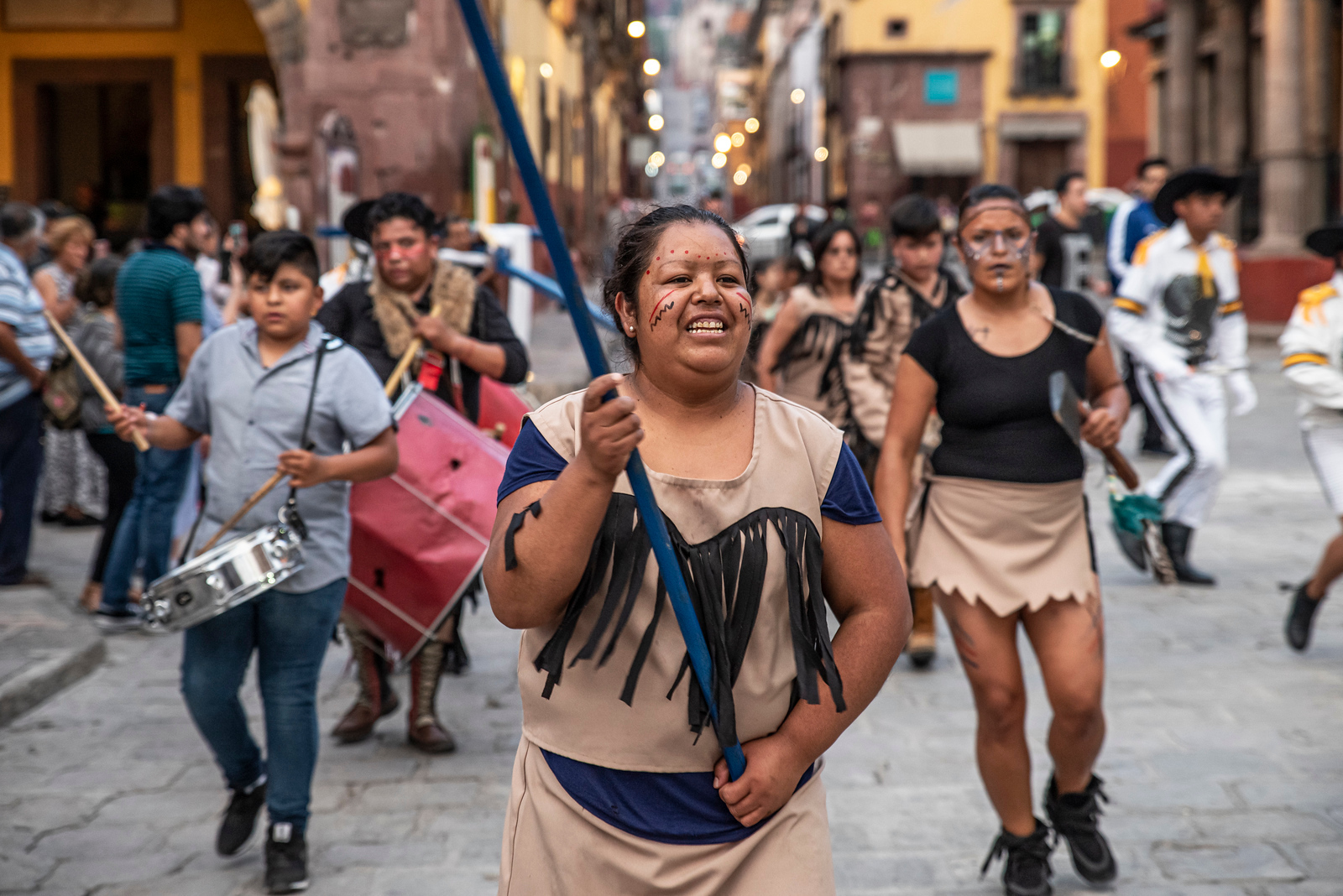 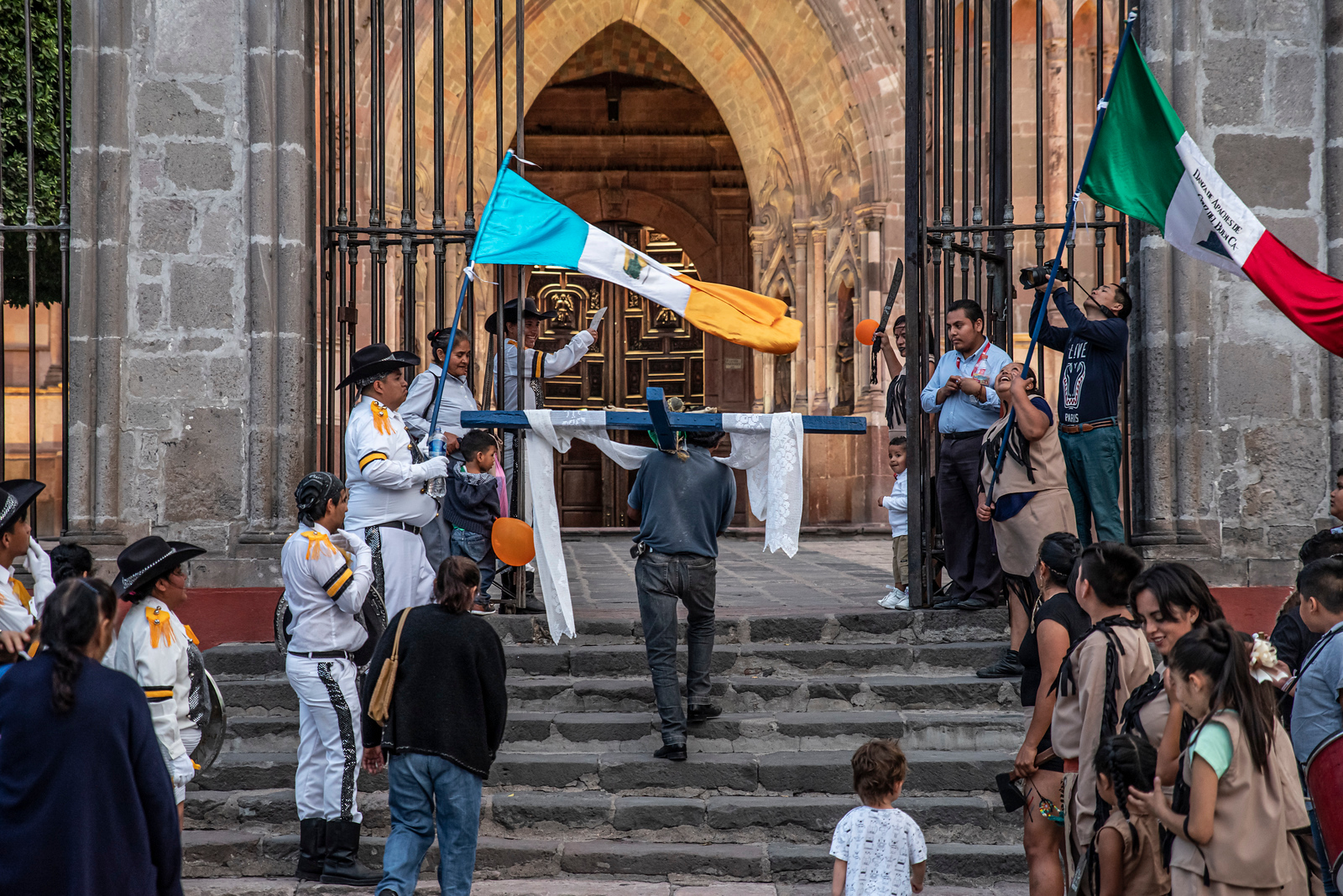 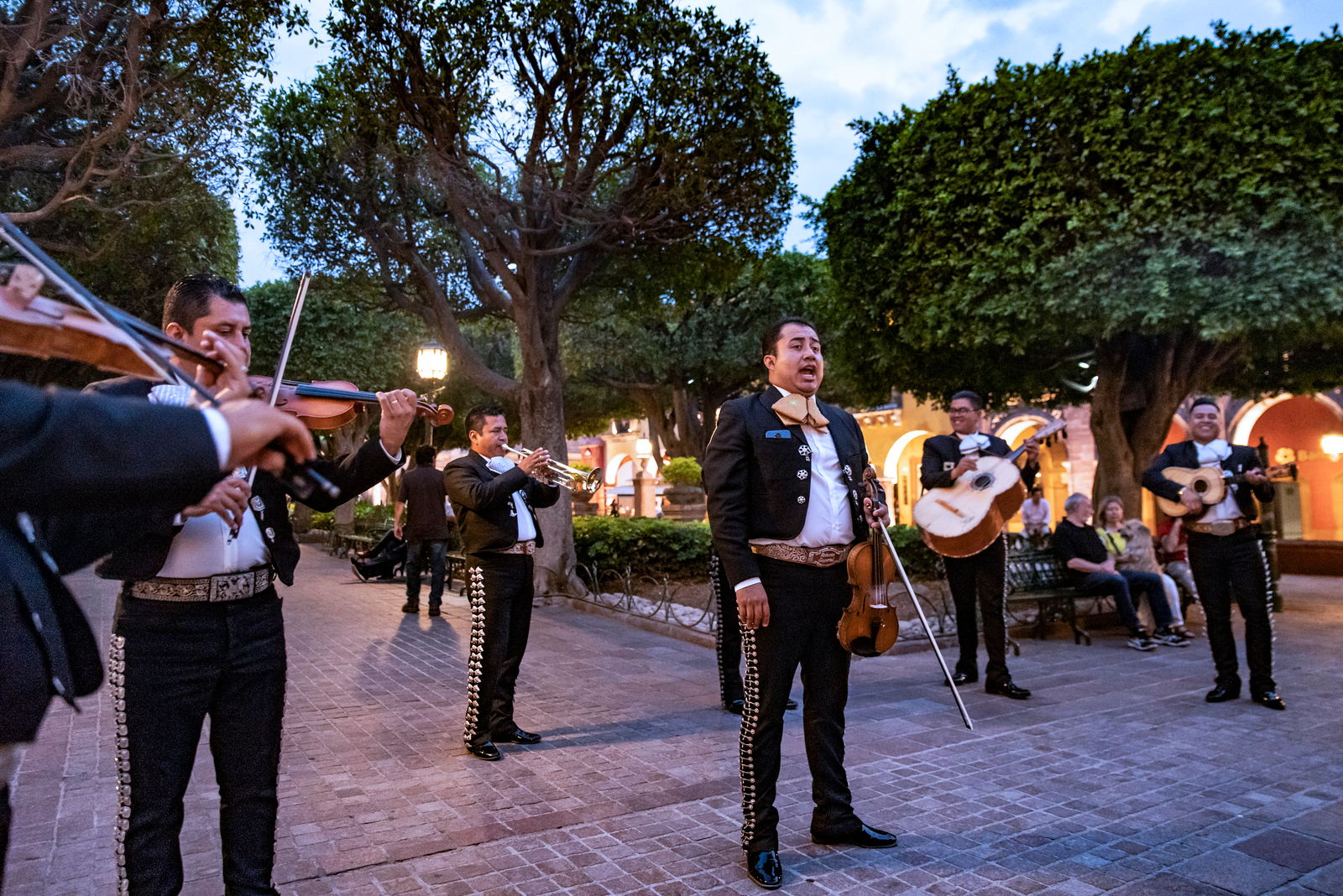 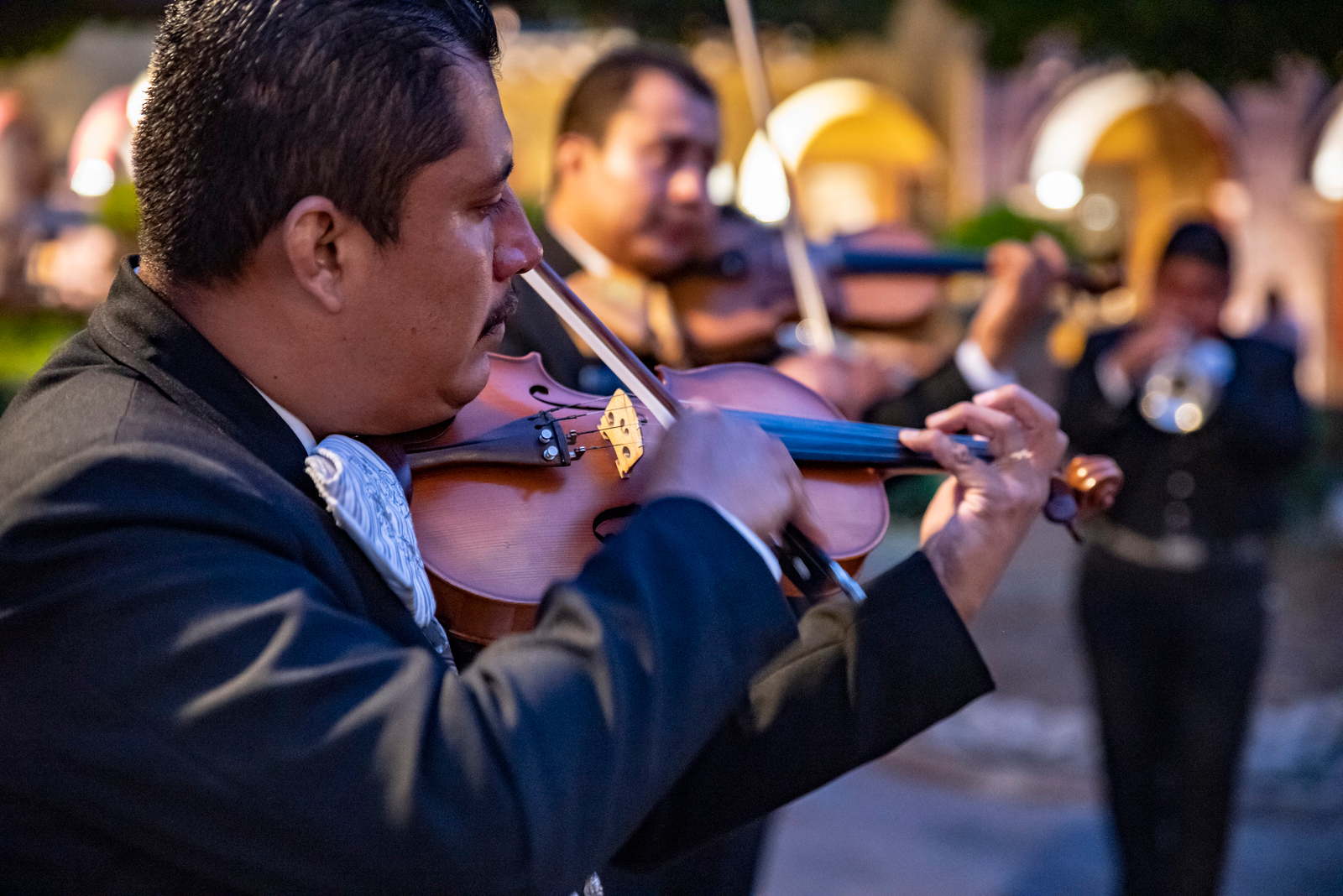 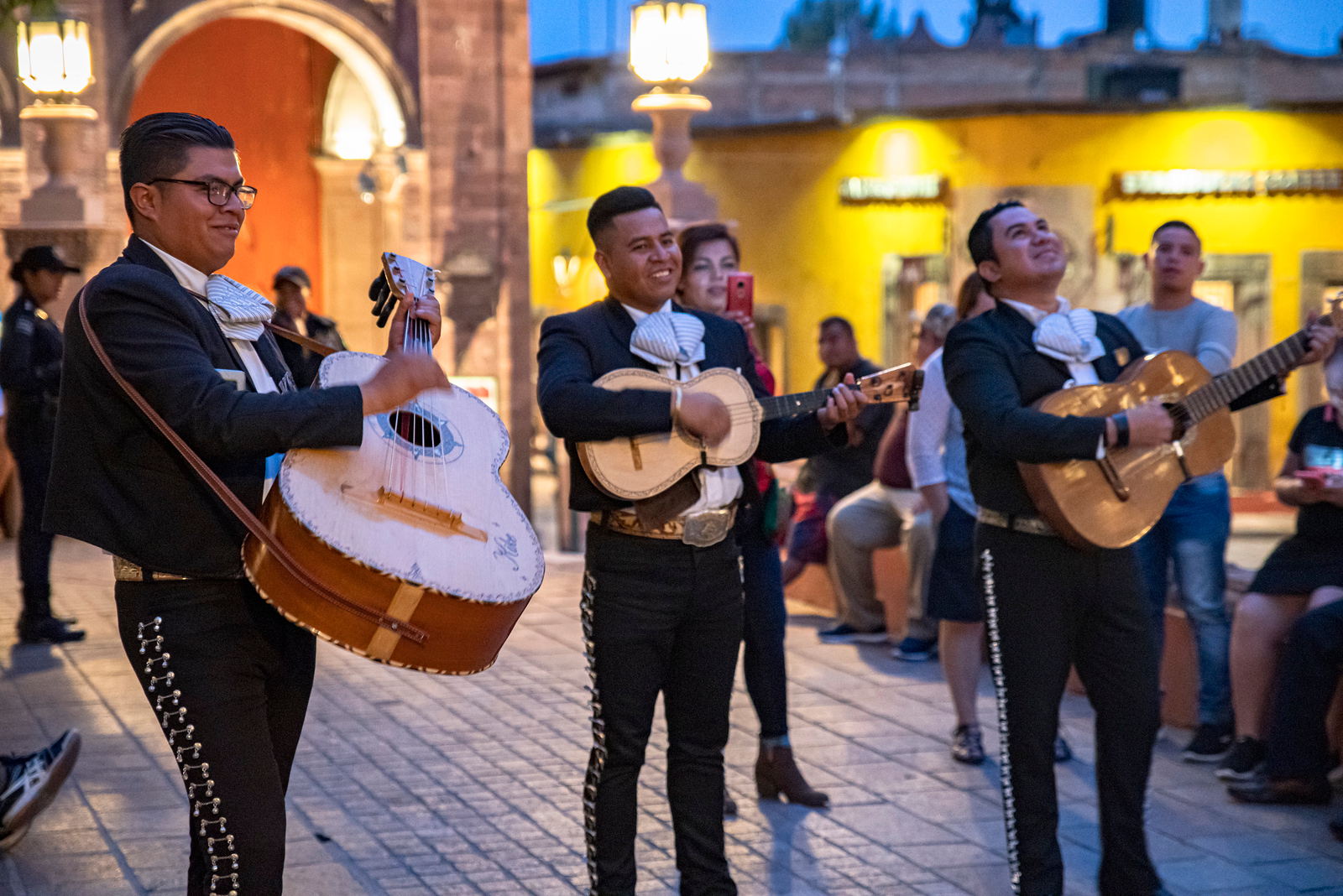 When the sun goes down, the Mariachis get to work in la jardin… 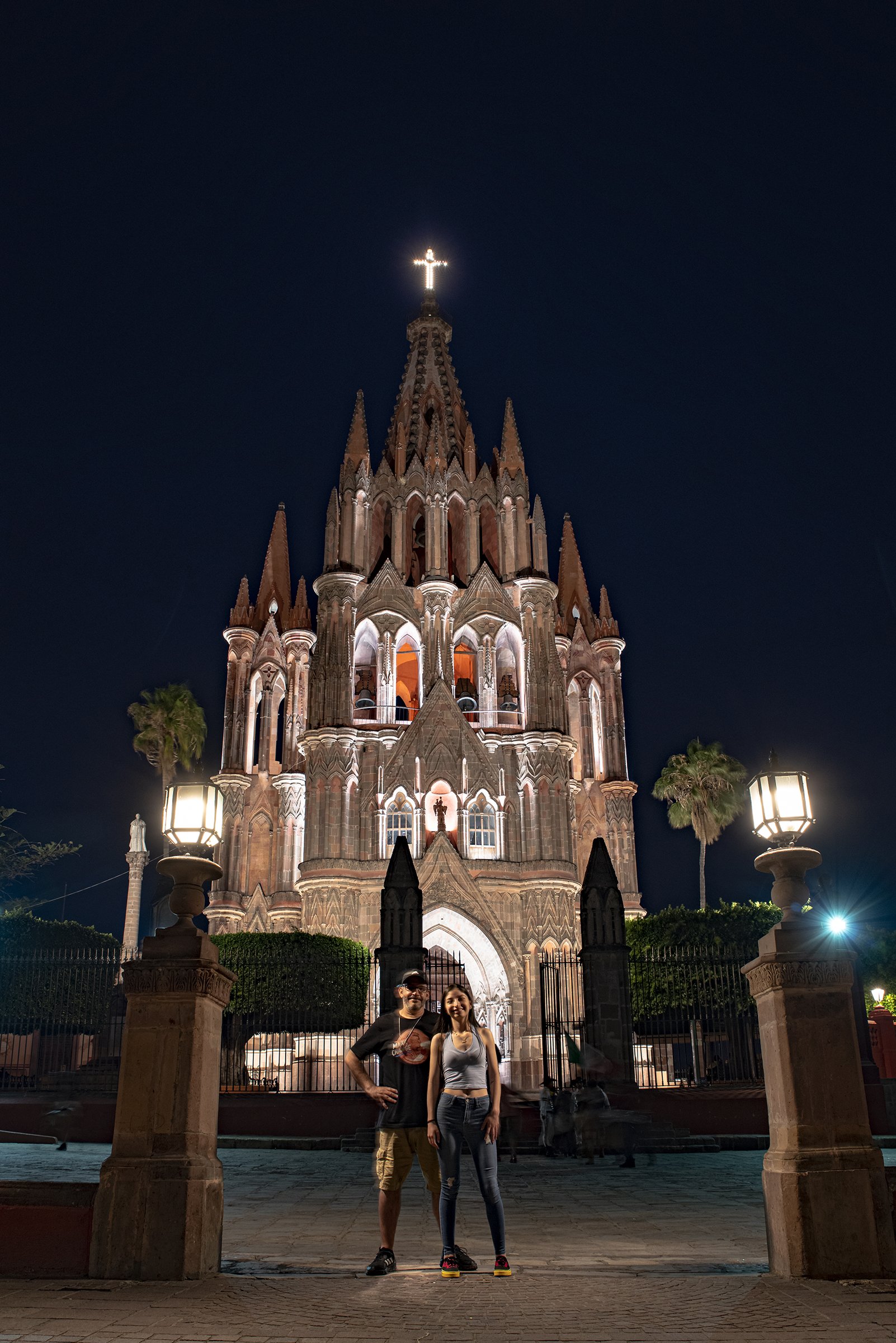 As night falls on San Miguel de Allende, one last tripod shot with my grrrl in front of the parish.

Where did we stay? The Boutique Hotel Casa Don Quijote which was more than nice enough for our needs. Walking distance to La Parroquia de San Miguel Arcángel and the town’s Historic Zone (albeit a mostly uphill walk – the good news is, it’s a mostly downhill walk back to the hotel), hot breakfast included and, more importantly, it was one of the few hotels in San Miguel de Allende that had AC in each room. It was very hot during the day in May (and I live in South Florida so I know hot) and yeah, it gets a bit cooler at night but not to the point where I could have slept without the AC on.
TRAVEL TIP #1: If you’re like me and like to sleep in a cool room at night, make sure your hotel in San Miguel de Allende has AC – especially during the months of April-June (the region’s hottest months).
TRAVEL TIP #2: Do not drink the water – even when they claim its purified or boiled. After being REALLY careful in Mexico City and Querétaro, I let my guard down and made the mistake of taking a few sips of the house water at a local restaurant (they claimed it was purified) and over the next four days (and nights) was making hourly visits to the bathroom. Montezuma’s Revenge is real, my friends. Stick to bottled water ONLY and don’t even trust the ice cubes. Nuff said.

My next post will feature images from our visit to another UNESCO World Heritage site, the nearby Sanctuary of Atotonilco, the “Sistine Chapel of Mexico”, so SUBSCRIBE HERE to avoid the painful feeling of regret.

Written By DanPerezPhotography On July 16, 2019

One of Mexico's Best-Kept Secrets: The City of Querétaro (In Pictures)

Sanctuary of Atotonilco: "The Sistine Chapel of Mexico" (In Pictures)