OK, this is it. We’ve come to the end of the road. This is the final series of photographs from our trip to Mexico way back in May. In my last post, I shared several photographs from our time spent in the enchanting city of Guanajuato, the loveliest city (by far) we visited in Mexico (sorry, San Miguel de Allende and the folks at Travel + Leisure magazine). Put this city on your Bucket List of places to visit – you can thank me afterwards.

As I stated in the previous post, Guanajuato’s historic city center was declared a UNESCO World Heritage Site in 1988. It was the last city on our four city trip through central Mexico, starting in Mexico City. So, if you want to see some of the best that Mexico has to offer, you can follow our itinerary and start in the historic center of Mexico City (making a stop in Teotihuacán), head west to the historic centers of Querétaro, NW to San Miguel de Allende (making a stop at the Sanctuary of Atotonilco), then continue west to Guanajuato before returning to Mexico City. Why? Because every location we visited have been declared a UNESCO World Heritage Site, that’s why.

Why does that matter? A World Heritage Site is a landmark or area which is chosen by the United Nations Educational, Scientific and Cultural Organisation as having cultural, historical, scientific or other form of significance, and is legally protected by international treaties. Moreover, to be selected, a World Heritage Site must be an already-classified landmark, unique in some respect as a geographically and historically identifiable place having special cultural or physical significance. There are thirty-five World Heritage Sites in Mexico – you can visit five of them with this itinerary alone. That’s a good thing. You can learn more at www.unesco.org.

That said, what I present to you here are a series of photographs from several attractions that we visited that I felt merited their own post. Enjoy…

Alhóndiga de Granaditas (Regional Museum of Guanajuato) is an old grain storage building walking distance from our hotel. The name Alhóndiga translates roughly from both Arabic and Spanish as grain market or warehouse. The original design was drafted in 1796 and construction was completed in 1809. During the Mexican War of Independence, the grain exchange building fell under siege by insurgent troops in September of 1810. There were about 300 loyalists who took refuge from 20,000 rebels led by Miguel Hidalgo y Costilla (one of the leaders of the Mexican War of Independence). At first the building held, but the insurgents burned down the eastern door and fought their way into the building. Everyone inside the Grain Exchange was killed. At the end of the day, hundreds of bodies were buried, and the whole city of Guanajuato pillaged.

These first insurgents eventually fell. The four main participants – Hidalgo, Ignacio Allende, Juan Aldama, and José Mariano Jiménez – were shot by Spanish firing squads, and their bodies decapitated. The four heads were hung from the corners of the Grain Exchange, to discourage other independence movements. The heads remained hanging for ten years, until Mexico achieved its independence in 1821.

In 1867, during the French Intervention in Mexico (an invasion of Mexico, launched in late 1861, under the regime of Napoleon III), the Emperor Maximilian ordered the Grain Exchange building to be converted into a prison. It remained a prison for nearly a century. Between 1955 and 1966, artist José Chávez Morado painted murals on the building reflecting the historical significance of the place. In 1958, the Grain Exchange opened officially as a museum. Inside of the museum are exhibits and art honoring heroes of the Independence. 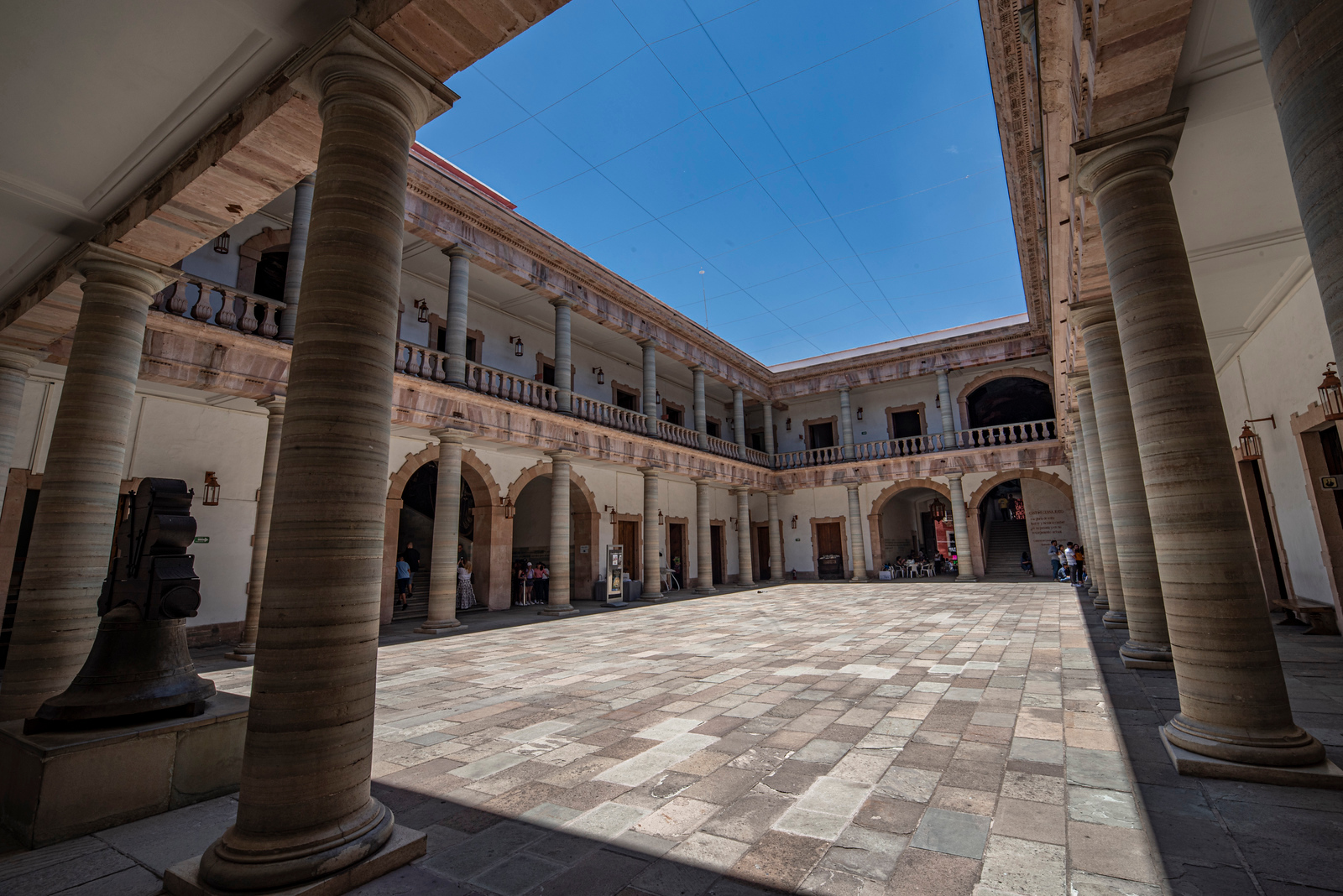 In the interior, there is a porch that leads to a spacious central patio. The porch contains Tuscan columns and adornments. There are two staircases that lead to the upper floor. 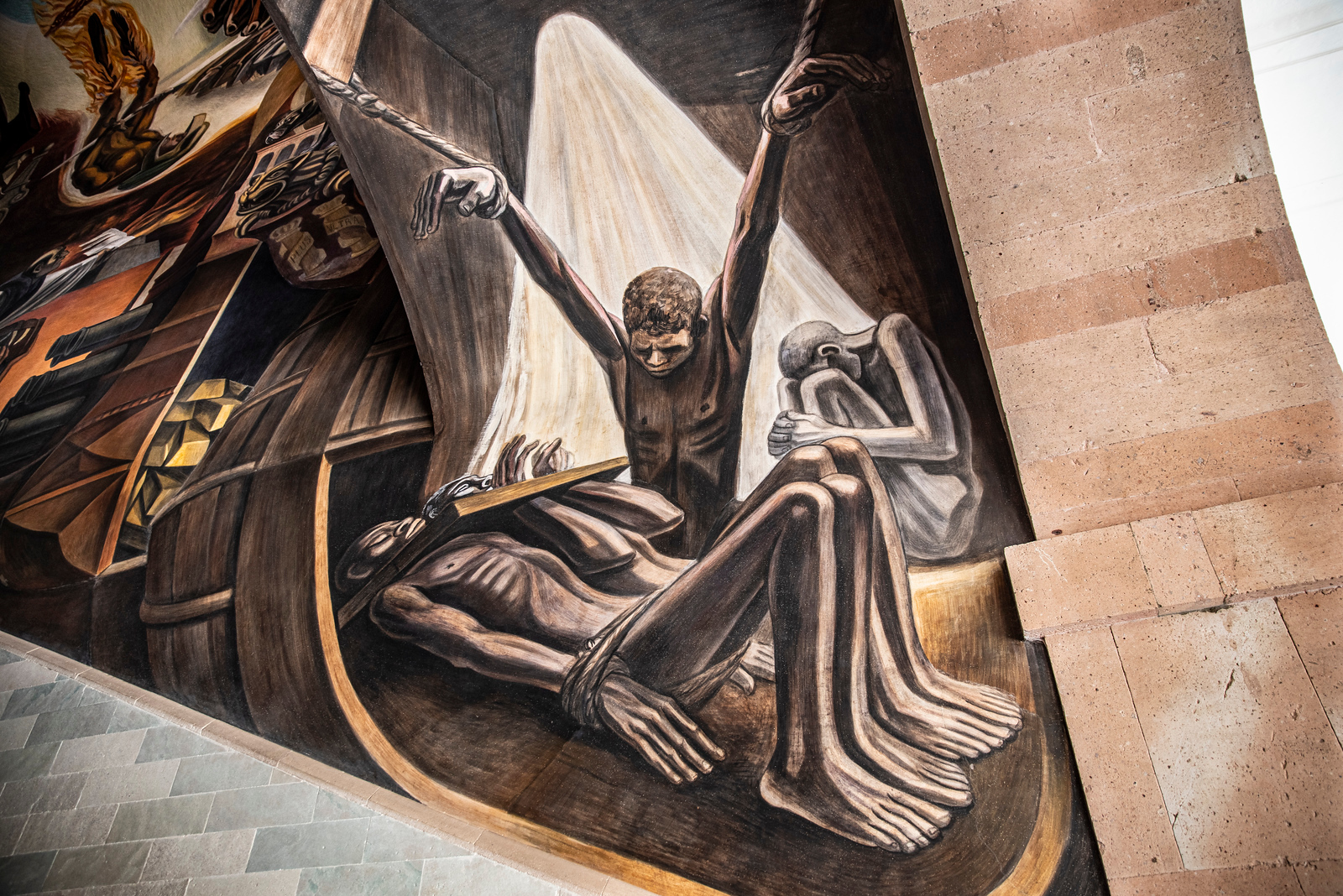 Between 1955 and 1966, artist José Chávez Morado painted murals on the building reflecting the historical significance of the place. The murals are as stunning as they are heartbreaking. 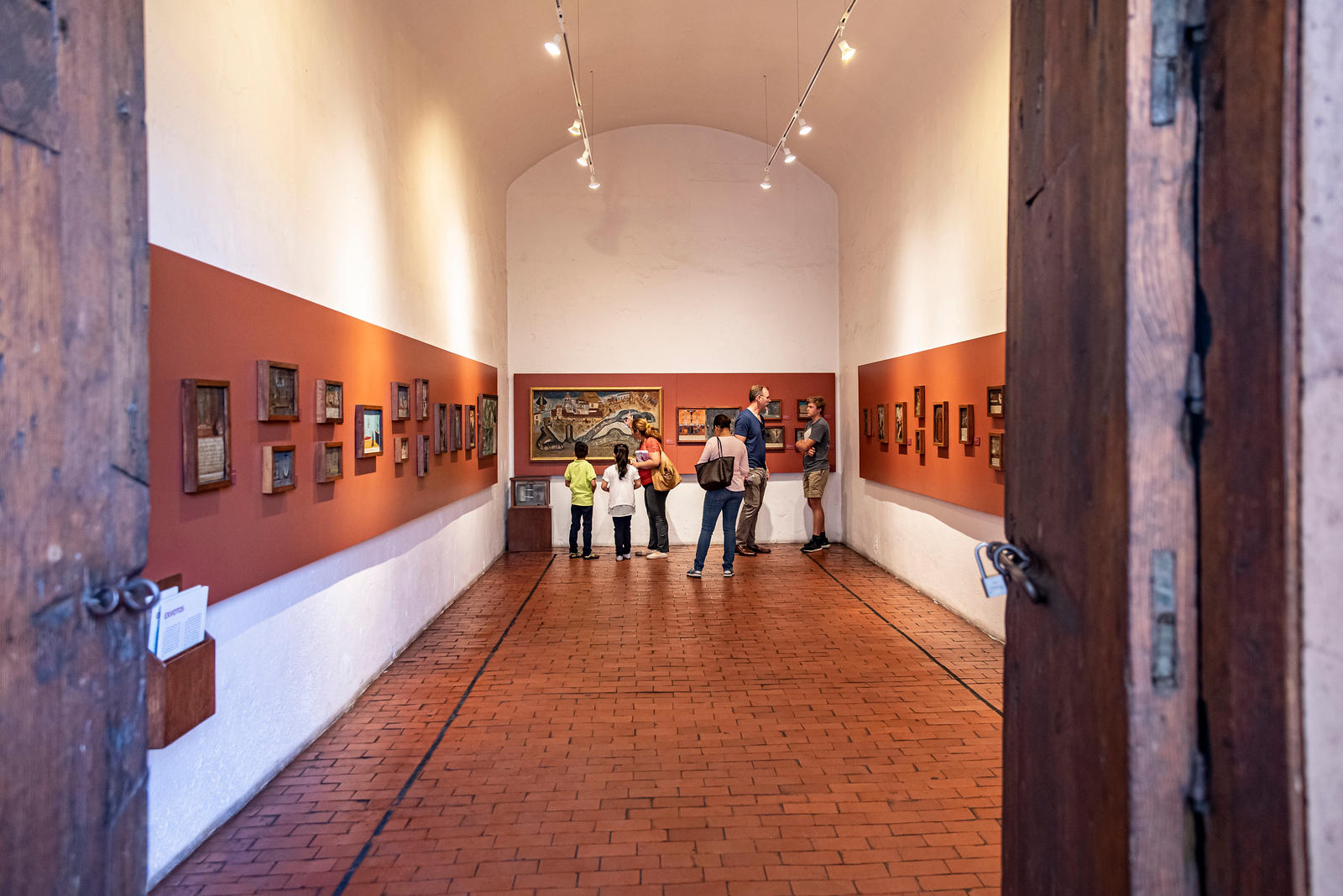 a collection of Pre-Columbian art…

and a remarkable series of portraits from the early 20th century by acclaimed Mexican photographer Romualdo Garcia. 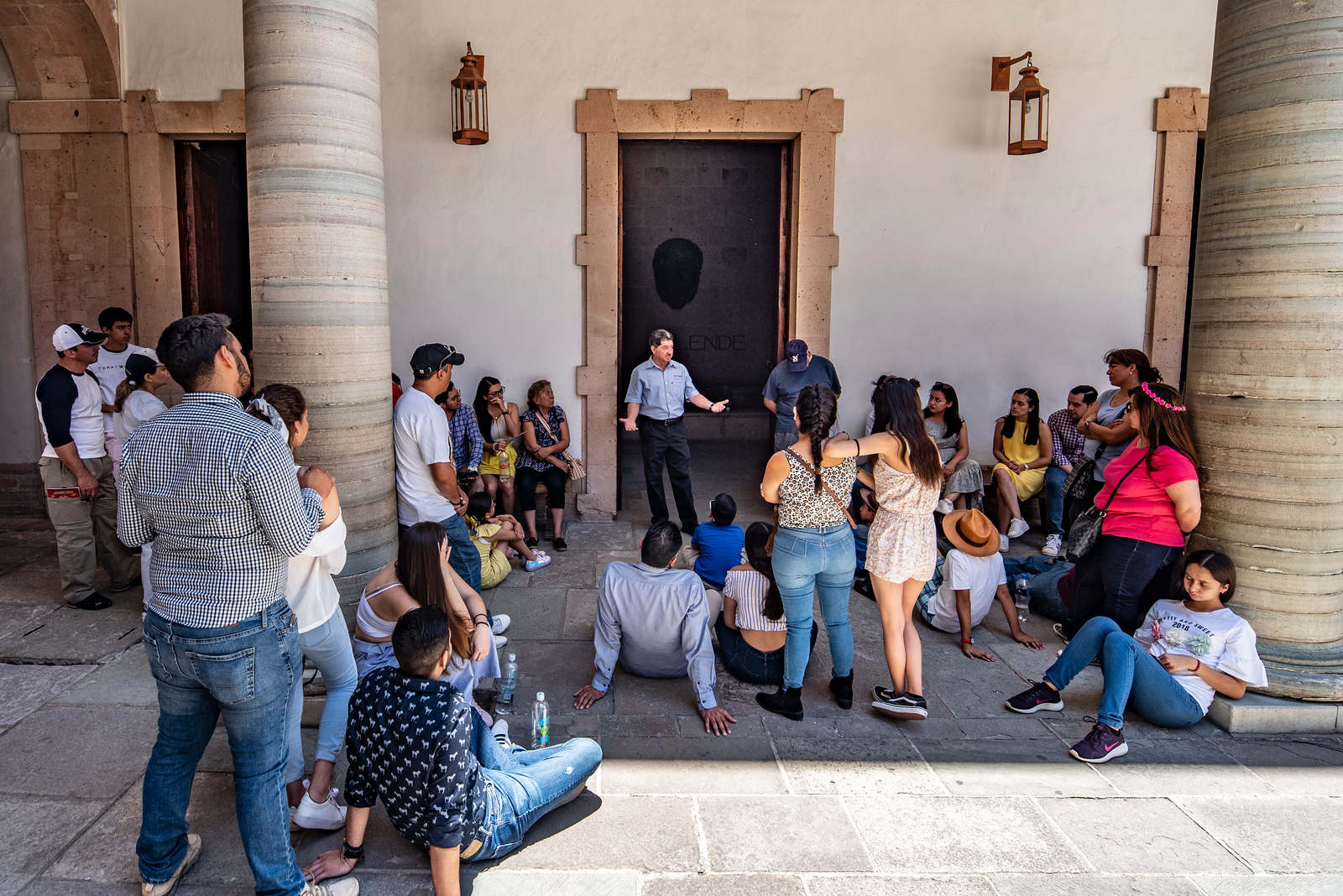 As we exited the museum, we came across an educational tour of the museum. A truly unique structure in a beautiful city with a remarkably bloody history.

The Mercado Hidalgo (Guanajuato’s main market) is housed within a classical iron structure, which dates from the final stages of the industrial era. The market is a chaotic collection of stalls, selling a wide range of items as well as cheap, authentic Mexican food. The market was originally constructed to be a major train station (French engineer Alexandre Gustave Eiffel was even enticed to work on the project) but it was never finalised. The failed project was transformed into a market in 1910 and named after Miguel Hidalgo, one of Guanajuato’s early Mexican independence martyrs. 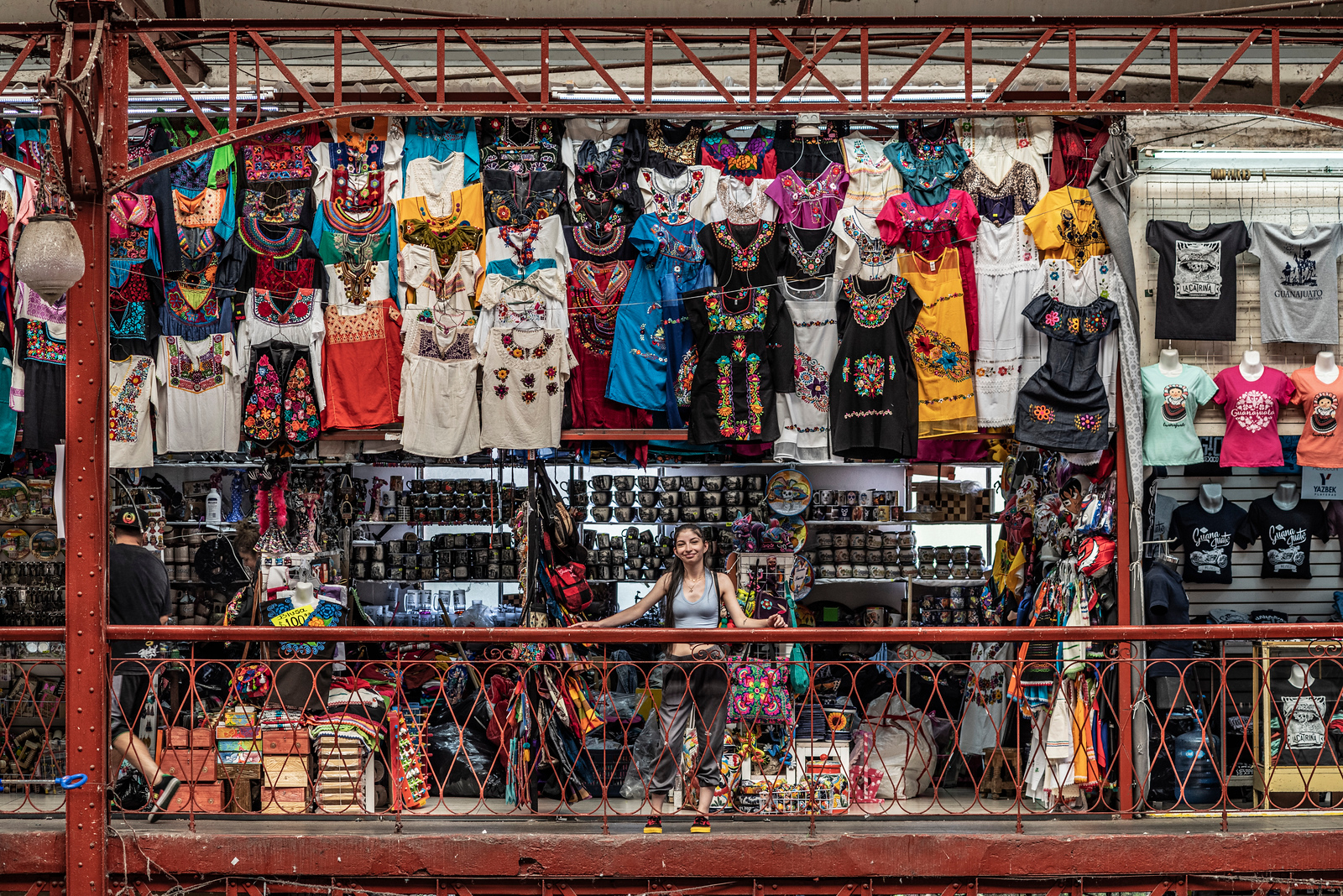 Did you know the great Mexican painter Diego River was born in Guanajuato in 1886? Did you also know that his full name was Diego María de la Concepción Juan Nepomuceno Estanislao de la Rivera y Barrientos Acosta y Rodríguez(!)? It was. Rivera’s large frescoes helped establish the Mexican mural movement in Mexican art. Rivera also had a volatile marriage with fellow Mexican artist Frida Kahlo. His former Guanajuato home has been transformed to a museum featuring some of his art (more like doodles than anything else). It wasn’t much of a museum (unless peering into the rooms where Mr. Rivera slept and ate are of interest to you) but the featured art by several other Mexican artists was worth the trip. Here’s a sample, snapped with my iPhone…

The Templo de Belén or the Parish of the Immaculate Heart of Mary, was completed in 1775. Bethlemite Monks who came from Guatemala built this church as part of an architectural complex which had a cemetery, a school, a group home and gardens. Today, only the temple remains, having a Baroque facade and a Gothic style interior. One of the most notable peculiarities of the church is in the vault located under its main altar which shelters around 300 crypts whose oldest date back at the end of the 18th century.

This contemporary art museum was small but featured several interesting pieces of art (it was also a nice way to get out of the hot afternoon sun for a bit). At only $15 pesos (about .75 USD), you couldn’t go wrong… Completed in 1765, it is the largest temple in Guanajuato and one of the largest Jesuit churches built in what was New Spain.

Bronze sculpture of Enrique Ruelas Espinoza, founder and director of the University Theater of Guanajuato, created in 1999 by the Mexican artist Glenda Hecksher.

Guanajuato. What a lovely city thou art. And what a time we had in Mexico. And despite my wife Madelyn no longer being with us, she’s with us in spirit wherever we go. And the proof of that is when a father travels with his 21 year old daughter to 4 cities in Mexico over 16 days and it’s like two old friends on a road trip. Nothing but a good time. That’s rare. And that’s what my wife left us with.
She is missed…

CHECK OUT MY OTHER PHOTOGRAPHY POSTS FROM OUR TRIP TO MEXICO

Written By DanPerezPhotography On September 26, 2019