Guadalajara, located in the Western-Pacific area of Mexico, is the capital and largest city of the Mexican state of Jalisco. The Guadalajara metropolitan area has a reported population of over five million inhabitants, making it the second most populous metropolitan area in Mexico, behind Mexico City. It’s also the tenth-largest Latin American city in population, urban area and gross domestic product.

The city was officially established in 1542 by the Spanish king Charles I and granted the coat of arms that the city still has today. I won’t bore you with the amount of bloodshed this region (and just about every other region of Mexico) has endured, starting with the Spaniards and the natives of the land upon settlement through the Mexican War of Independence, but it’s been a lot. Despite the violence, the 19th century was a period of economic, technological and social growth for the city. 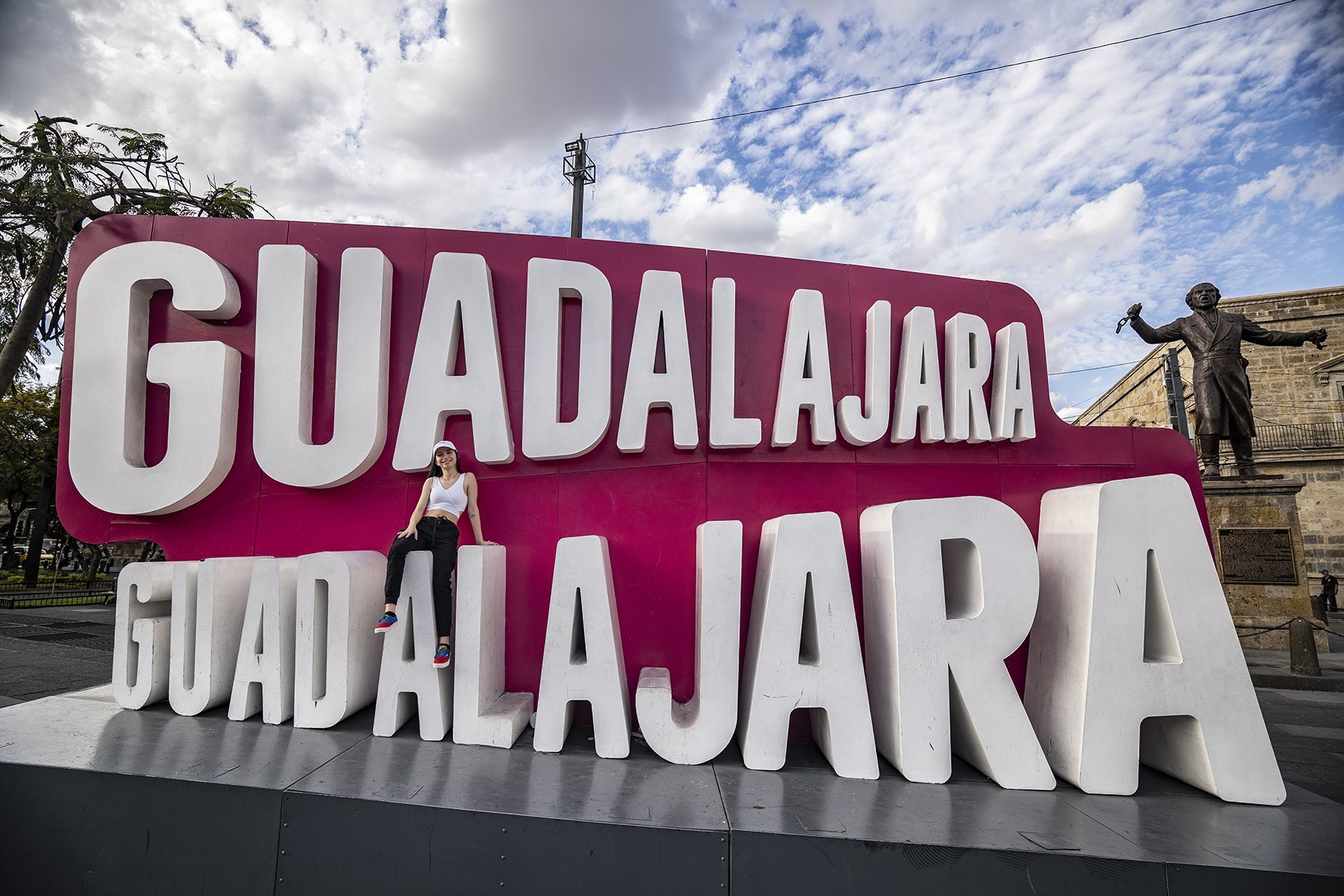 Guadalajara again experienced substantial growth after the 1930s, and the first industrial park was established in 1947. Its population surpassed one million in 1964, and by the 1970s it was Mexico’s second-largest city and the largest in western Mexico. Since 1996, the activity of multinational corporations has had a significant effect on the economic and social development of the city. The presence of companies such as Kodak, Hewlett-Packard, Motorola and IBM has been based on production facilities built outside the city proper, bringing in foreign labor and capital.

Guadalajara is also a major Mexican cultural center, as it is considered by most to be the home of the famous mariachi genre of music. The city has one of the largest cultural agendas on the continent exhibiting works by international artists and hosting international cultural events whose radius of influence reaches most of the countries of Latin America, including the southwestern United States.

My daughter and I spent the week of my birthday here last month, staying in the city’s charming historic downtown area, arriving at the Don Miguel Hidalgo y Costilla International Airport, (also known as Guadalajara International Airport) direct from Miami on Volaris. And despite the high number of negative online reviews for the airline, we had zero issues on our flight – leaving and arriving on-time both ways. We stood at the Hotel de Mendoza which was walking distance to just about all of Guadalajara’s top attractions and featured an outdoor patio with a lovely view of downtown.

So, let’s get to them, yes? The attractions. I found Guadalajara to be a far more charming city than I had expected. It’s a welcome step slower and far less hectic than Mexico City and that was a good thing. Getting in and out of the historic center was no problemo thanks to the reduced traffic and availability of Uber (good luck trying to get out of Mexico City’s historic center in less than 40 minutes). That we had glorious weather during the week made the city of Guadalajara that much nicer. Enjoy the photographs…

Built in 1588 as part of the Convent of Santa Maria de Gracia, the Palacio de Justicia de Guadalajara (photo on the left) has been the seat of the Judiciary of the state since 1952. On the right, a large sculpture of Miguel Hidalgo y Costilla designed by the architect Ignacio Díaz Morales is one of the centerpieces of Plaza de la Liberación, the largest plaza in Guadalajara. Hidalgo was a Roman Catholic priest and revolutionary leader who is called the father of Mexican independence. 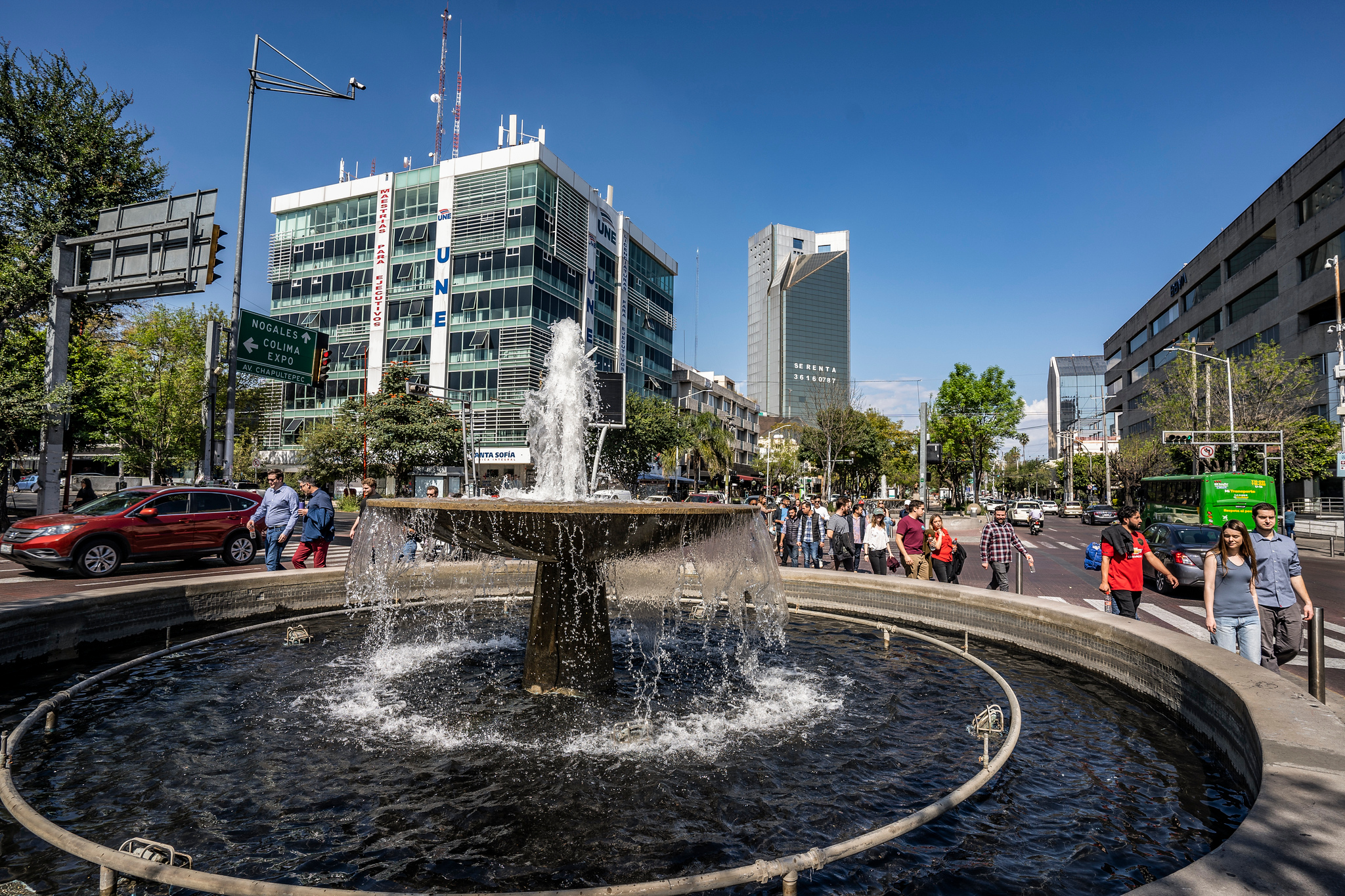 The Avenida Chapultepec is one of the main avenues of the city, lined with benches and featuring several monuments…

The Templo de Santa María de Gracia is one of the oldest churches in the city, dating back to 1661. 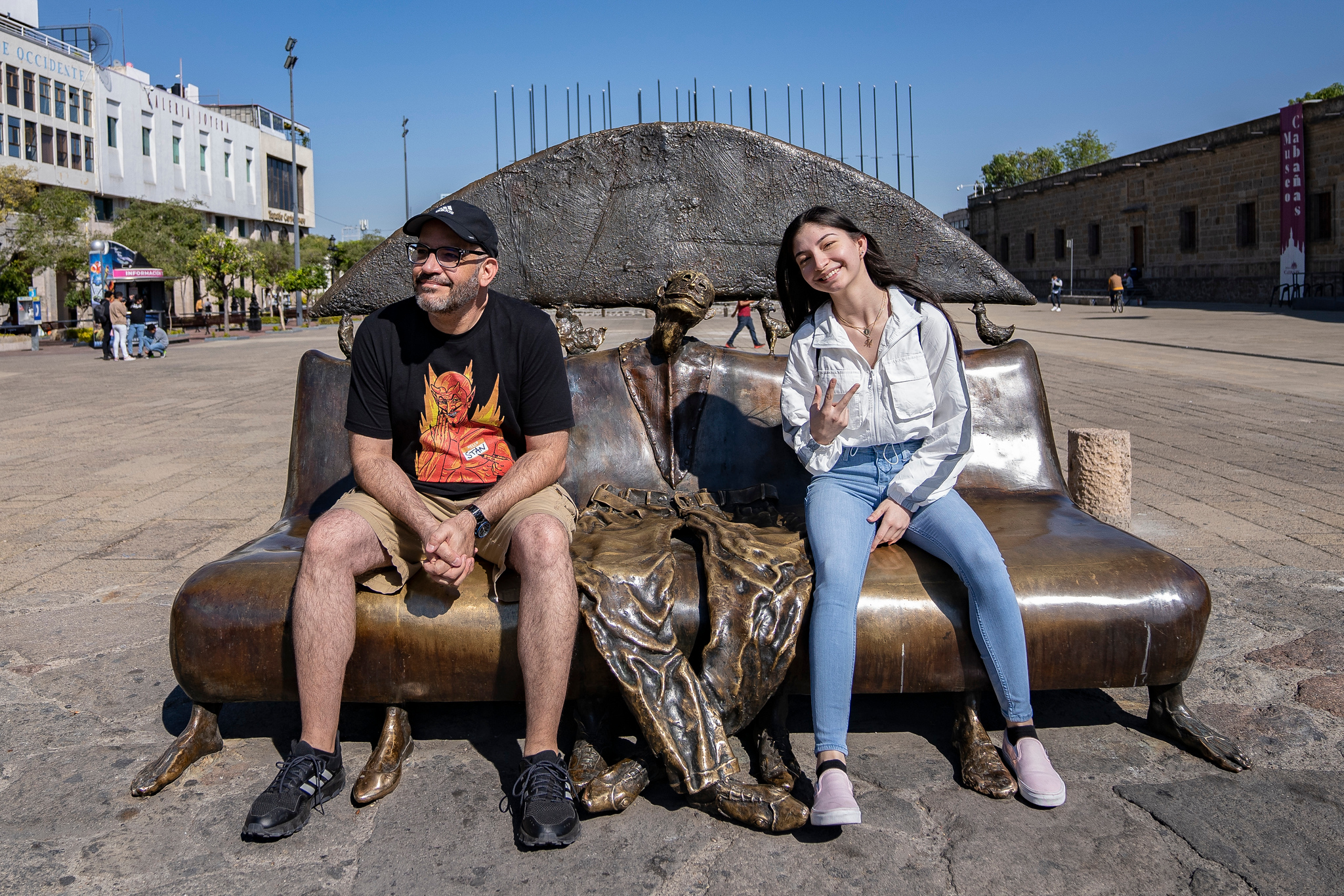 The Hospicio Cabañas, a UNESCO World Heritage Site, was built at the beginning of the 19th century to provide care and shelter for the disadvantaged – orphans, the elderly, and the handicapped. The highlight of the interior decoration is a series of monumental frescoes by José Clemente Orozco, including one of his most famed creations, the allegory of The Man of Fire. 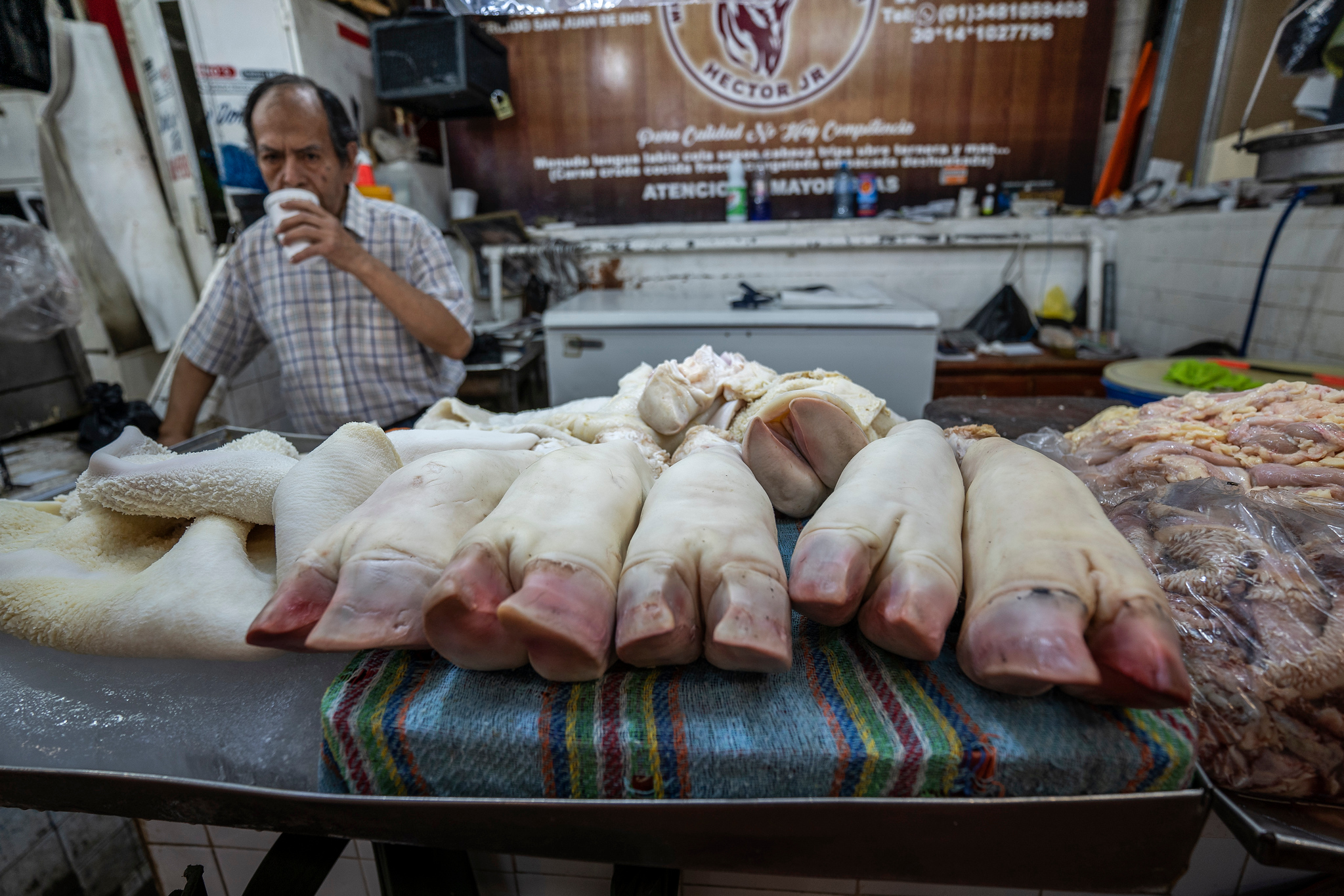 Museum of the Arts of the University of Guadalajara (MUSA)

The Museum of the Arts of the University of Guadalajara (MUSA) promotes art and culture through exhibitions and educational projects and features two remarkable fresco murals – made from 1935 to 1937 – by Mexican artist José Clemente Orozco. 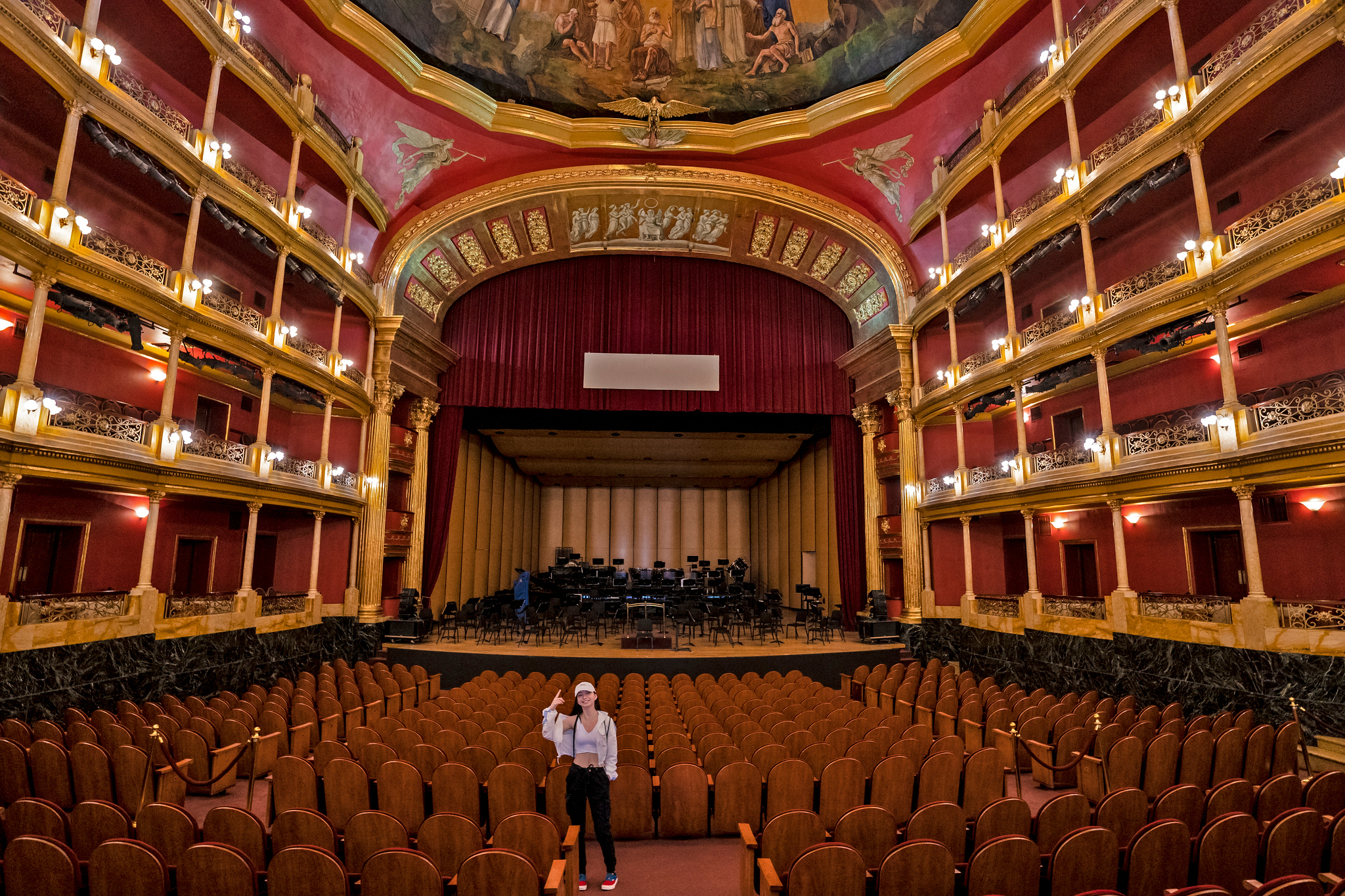 Teatro Degollado (Degollado Theater) is a neoclassical Mexican theater known for its diverse performances and artistic design. The theater was inaugurated in September 1866; breathing life to the city through its innovative artistic beauty. 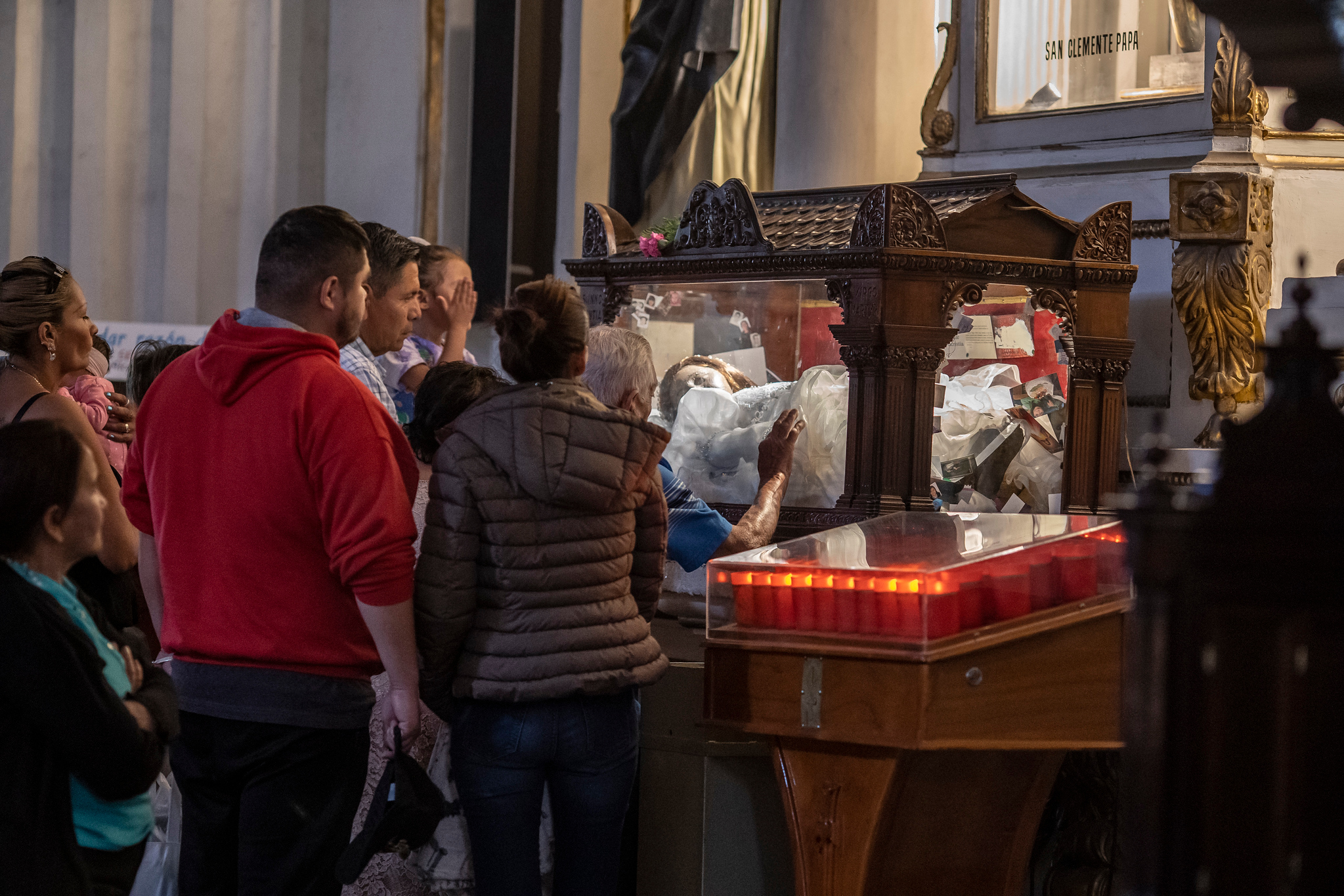 The Guadalajara Cathedral is the Roman Catholic cathedral of the Archdiocese of Guadalajara and a minor basilica. It is built in the Spanish Renaissance style and dates back to 1541. 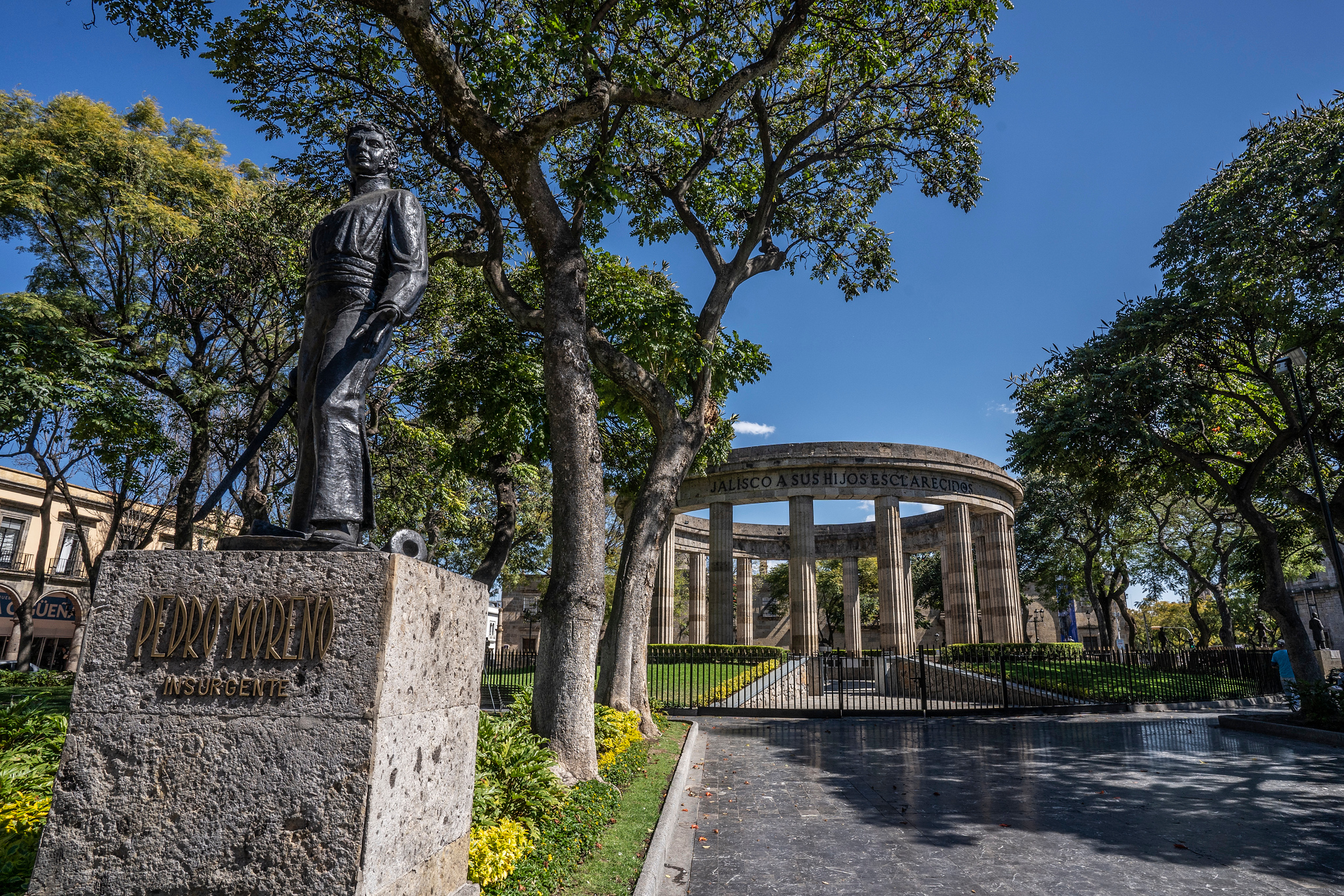 The Rotonda de los Jaliscienses Ilustres (Rotunda of the Illustrious Jaliscans) is a circle of 17 Doric columns and a monument to the region’s favorite writers and revolutionaries.

“Arbol Adentro” is a large sculpture created by Mexican singer and artist José Fors. It was inaugurated as part of the city’s Public Art project in December 2017… 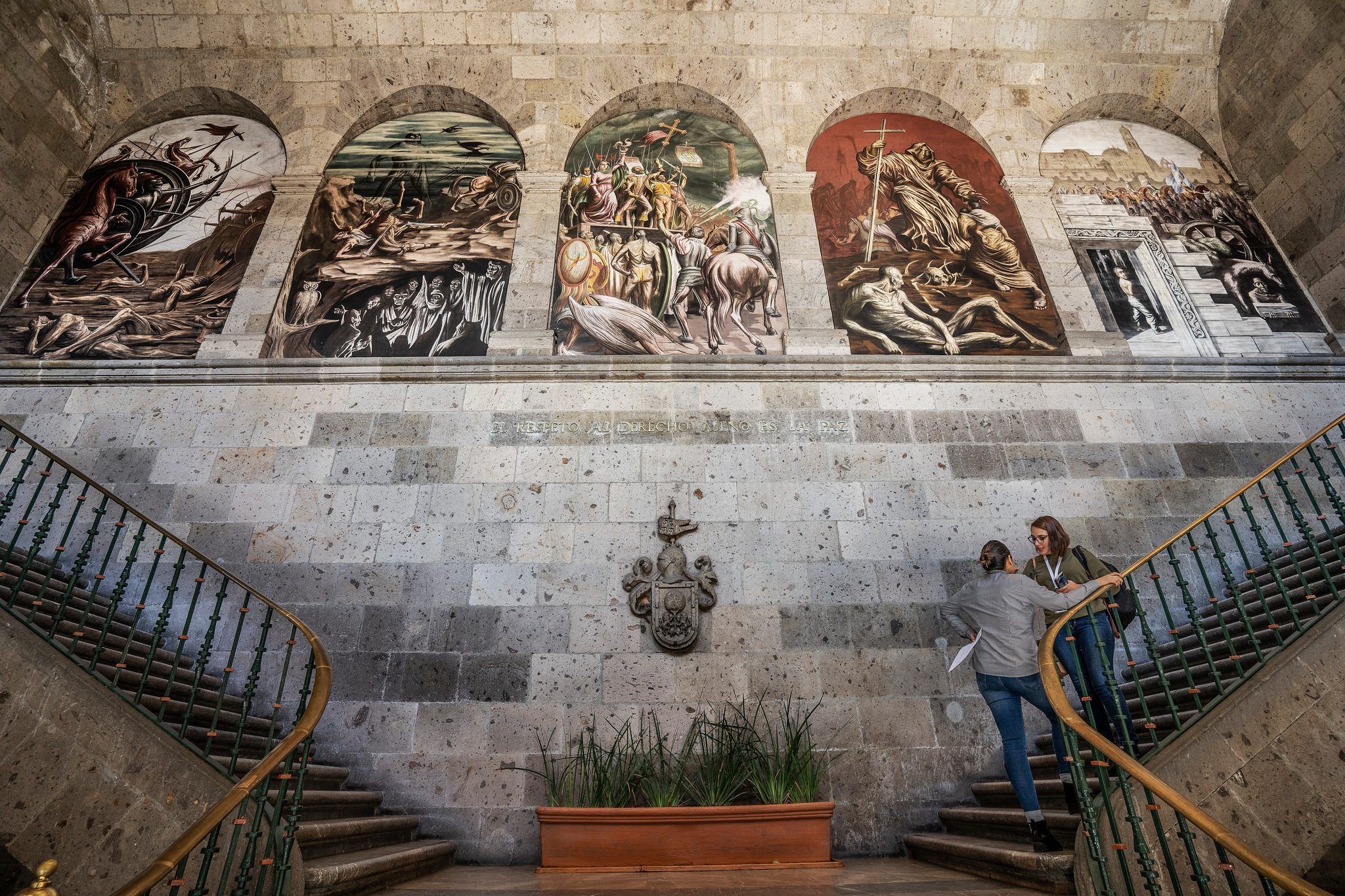 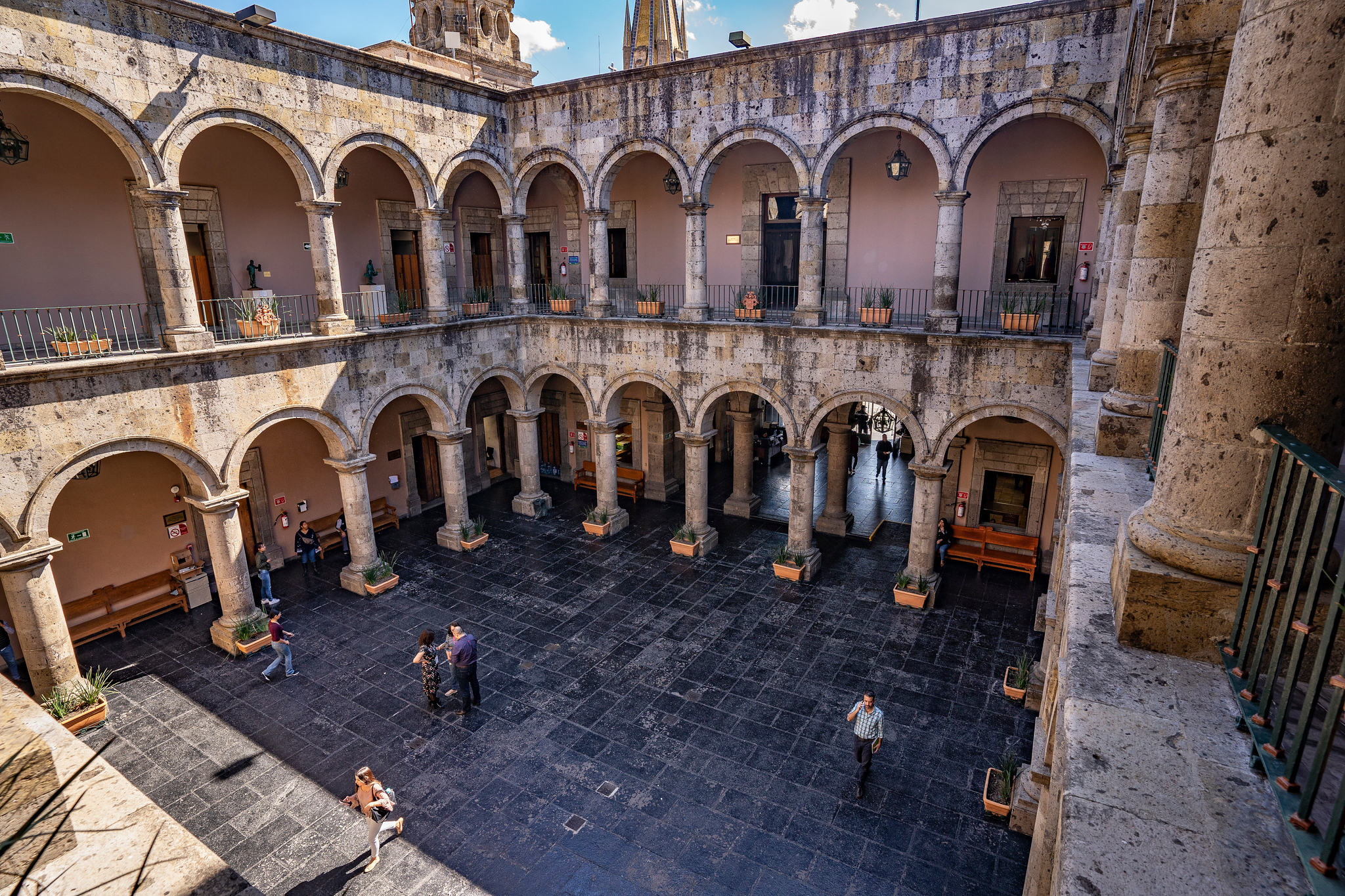 The Palacio Municipal de Guadalajara (Municipal Palace of Guadalajara) is a neocolonial style building built between 1949 and 1952 that is the seat of the Municipal City Hall of the state capital of Jalisco, Mexico. Inside the enclosure is a mural made in 1963 by acclaimed Mexican artist Gabriel Flores. It has five panels whose theme refers to the foundation of the City of Guadalajara: La Conquista Española, La Caída de Pedro de Álvarado, Fundadores de Guadalajara, La Conquista Espiritual y el Paseo de Pendón.

Lunchtime view at a restaurant across from the Palacio Municipal… 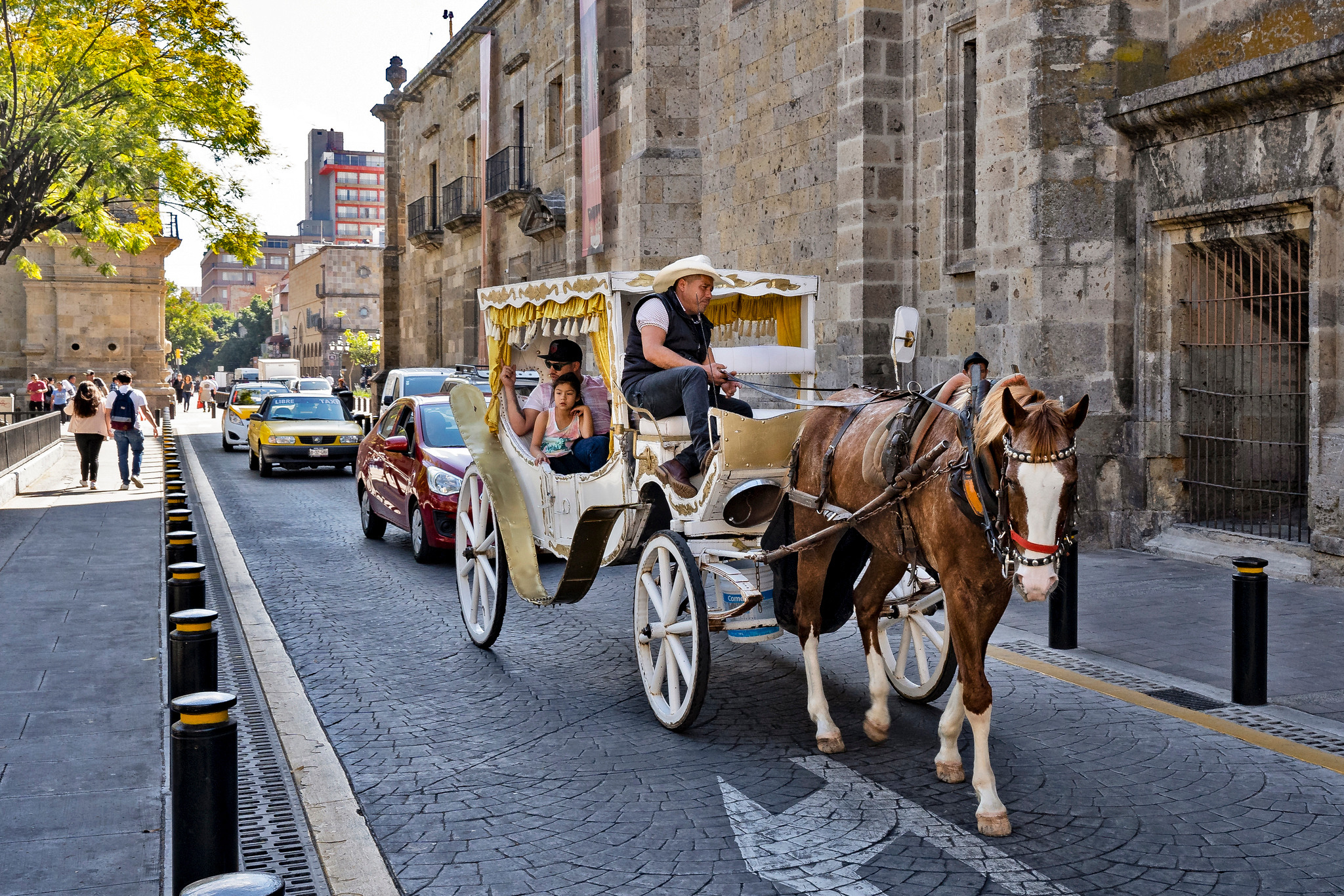 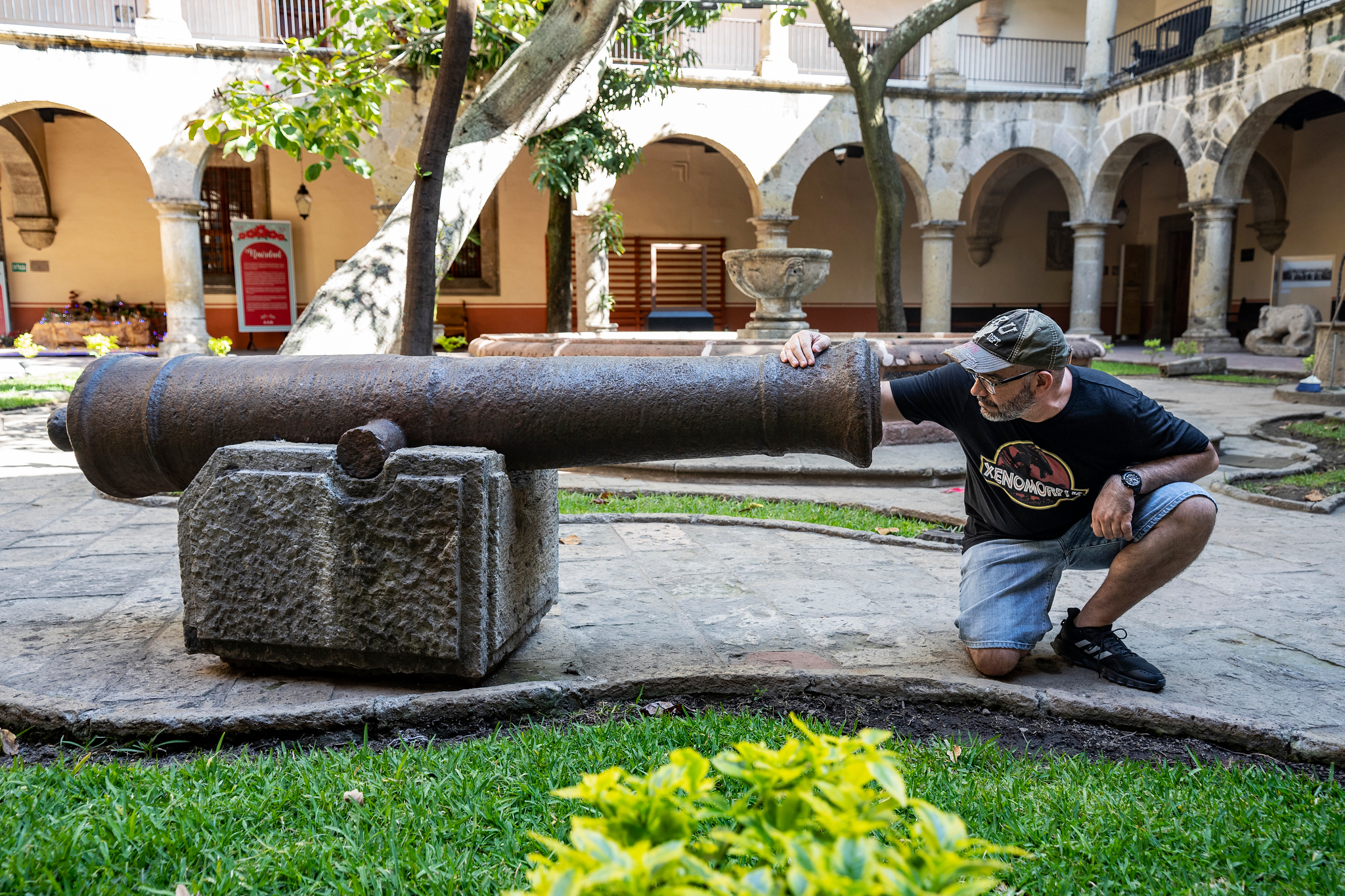 The Regional Museum of Guadalajara was built in the late eighteenth century. The building’s first public use was as a library housed in what was once the Tridentino San José Seminary. During the War of Independence it served both as a barracks for the Mexican soldiers and a prison for their Royalist enemies. It was inaugurated as the Regional Museum in 1976 and is managed by the National Institute of Anthropology and History. It has permanent and temporary exhibitions with several paleontological and archaeological pieces and various works of art – including the entire skeleton of a wooly mammoth from the Pleistocene Era which was found in Catarina, Jalisco. 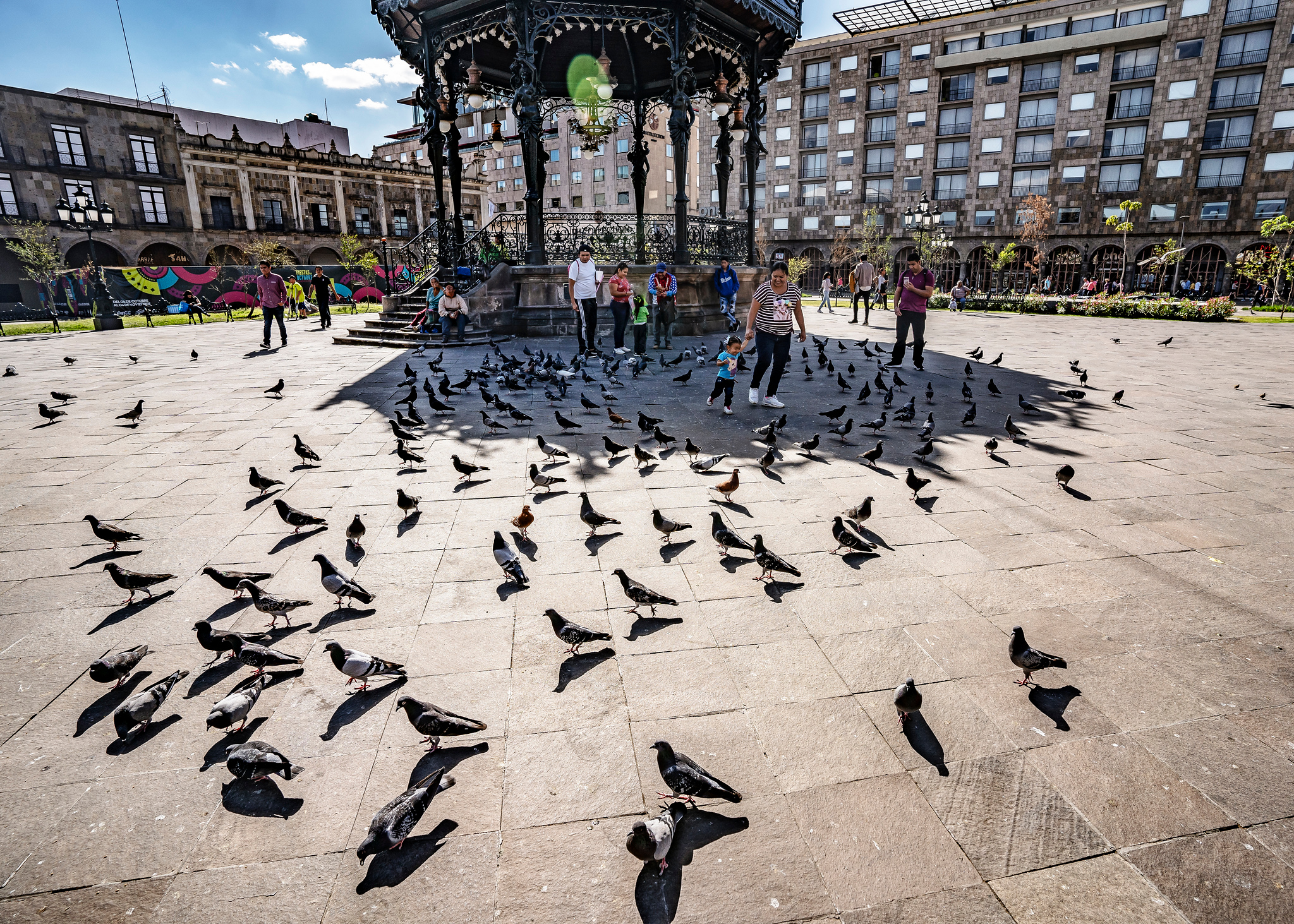 The Plaza de Armas is the main square in Guadalajara’s historic center. 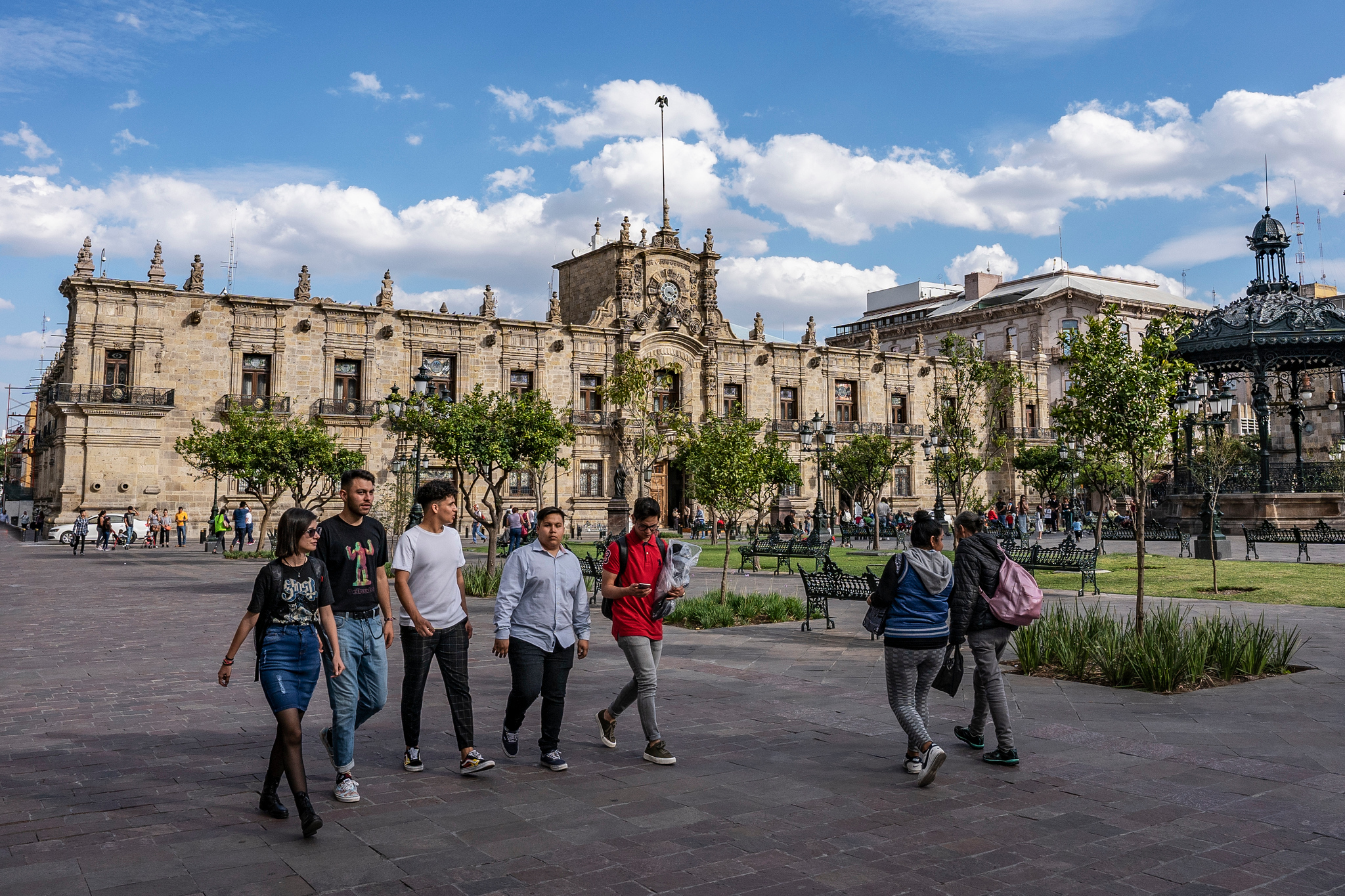 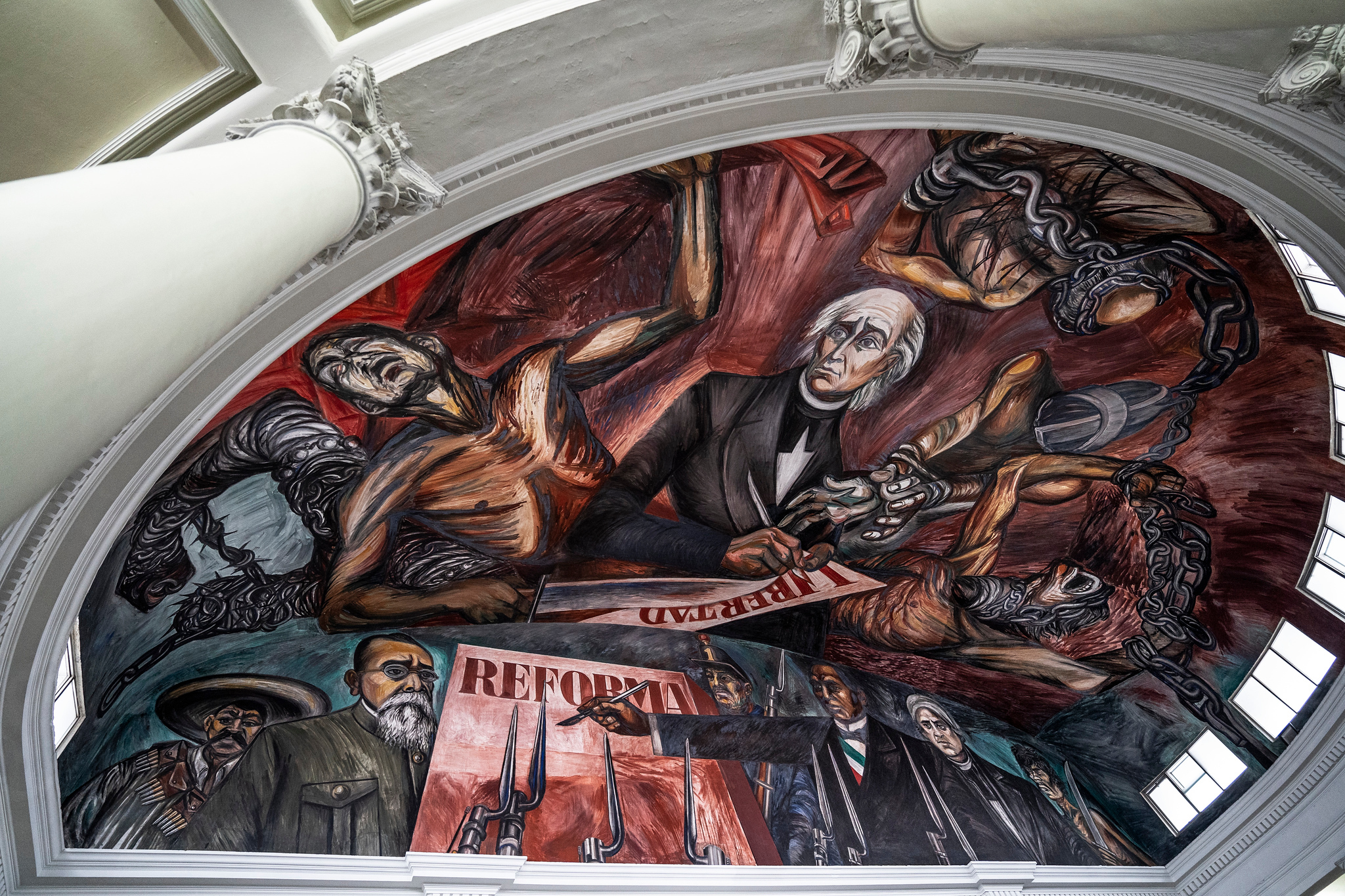 The Palacio de Gobierno is a beautiful 18th-century palace that housed the Mexican government for many years. It features fascinating murals by renowned Mexican artist José Clemente Orozco.

Me and my grrrl outside the Ex Convento del Carmen, a 17th-century church converted into an art gallery presenting work by local & foreign artists. 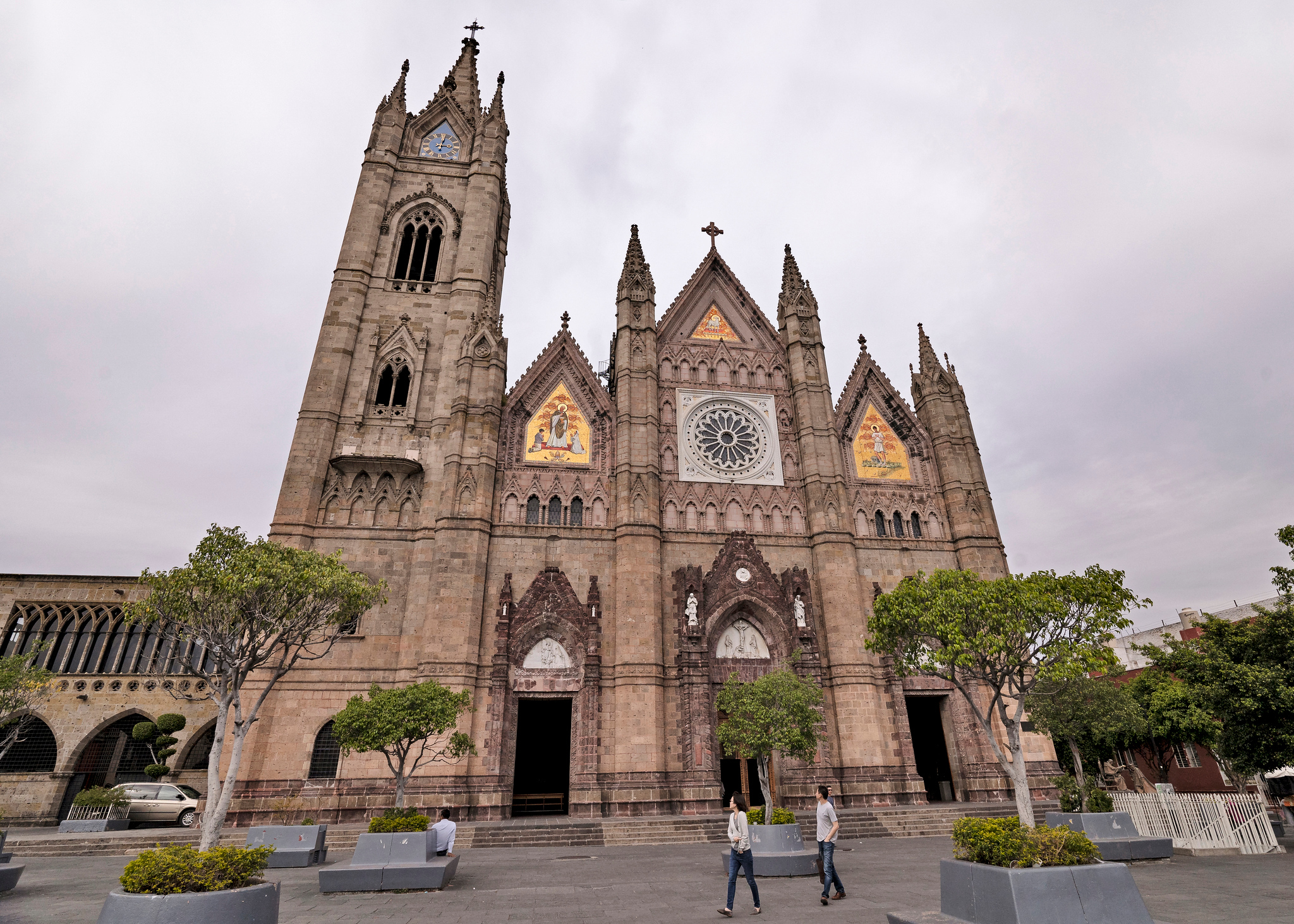 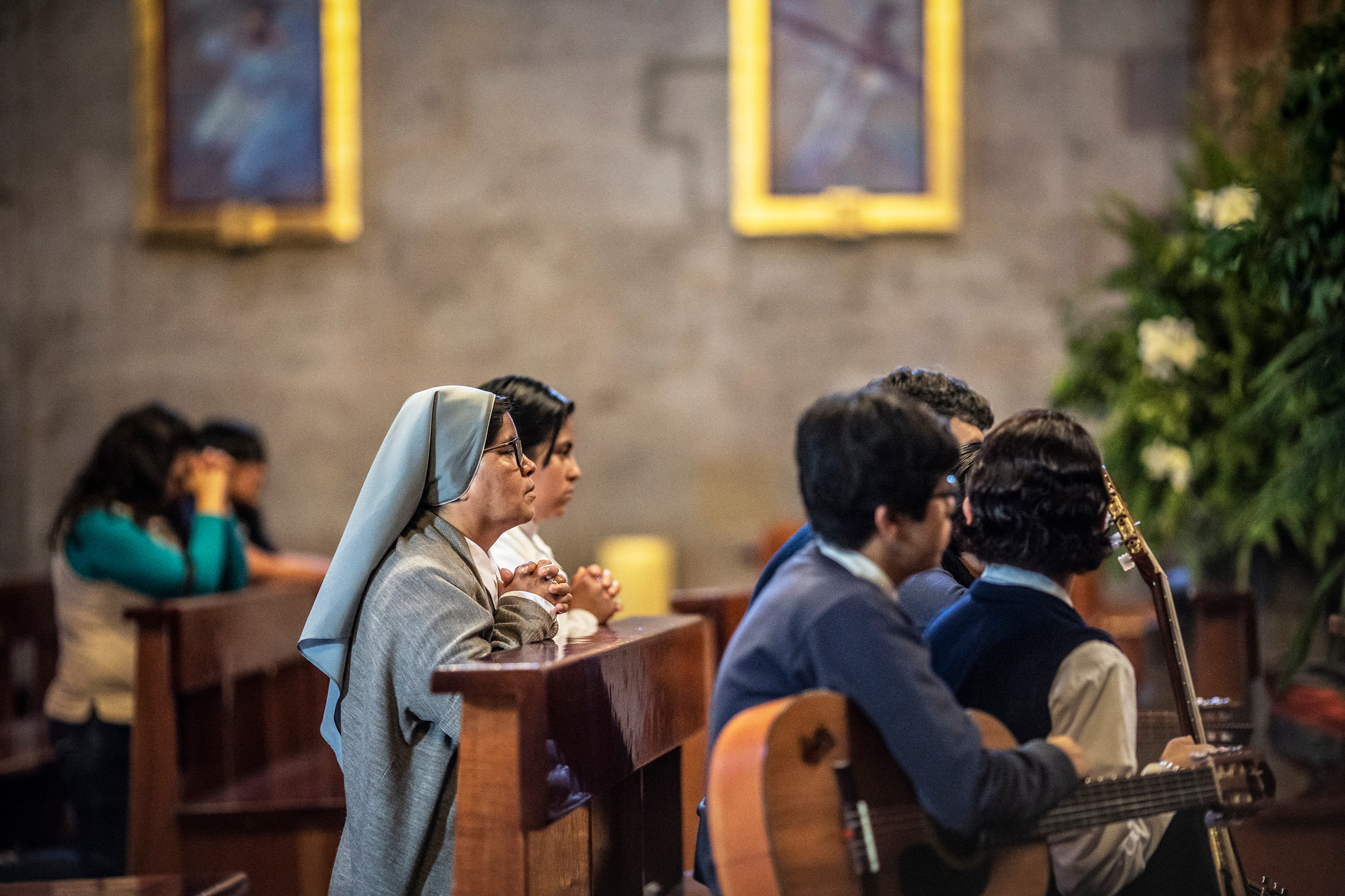 The Templo Expiatorio del Santísimo Sacramento is a Catholic church dedicated to the Blessed Sacrament. The church is of neo-Gothic style and is considered the greatest work of its kind in Mexico. Its construction began on August 15, 1897 and ended 75 years later in 1972.

Los Arcos de Guadalajara is a neoclassical archway, built in 1942, commemorating the 400th anniversary of Guadalajara… 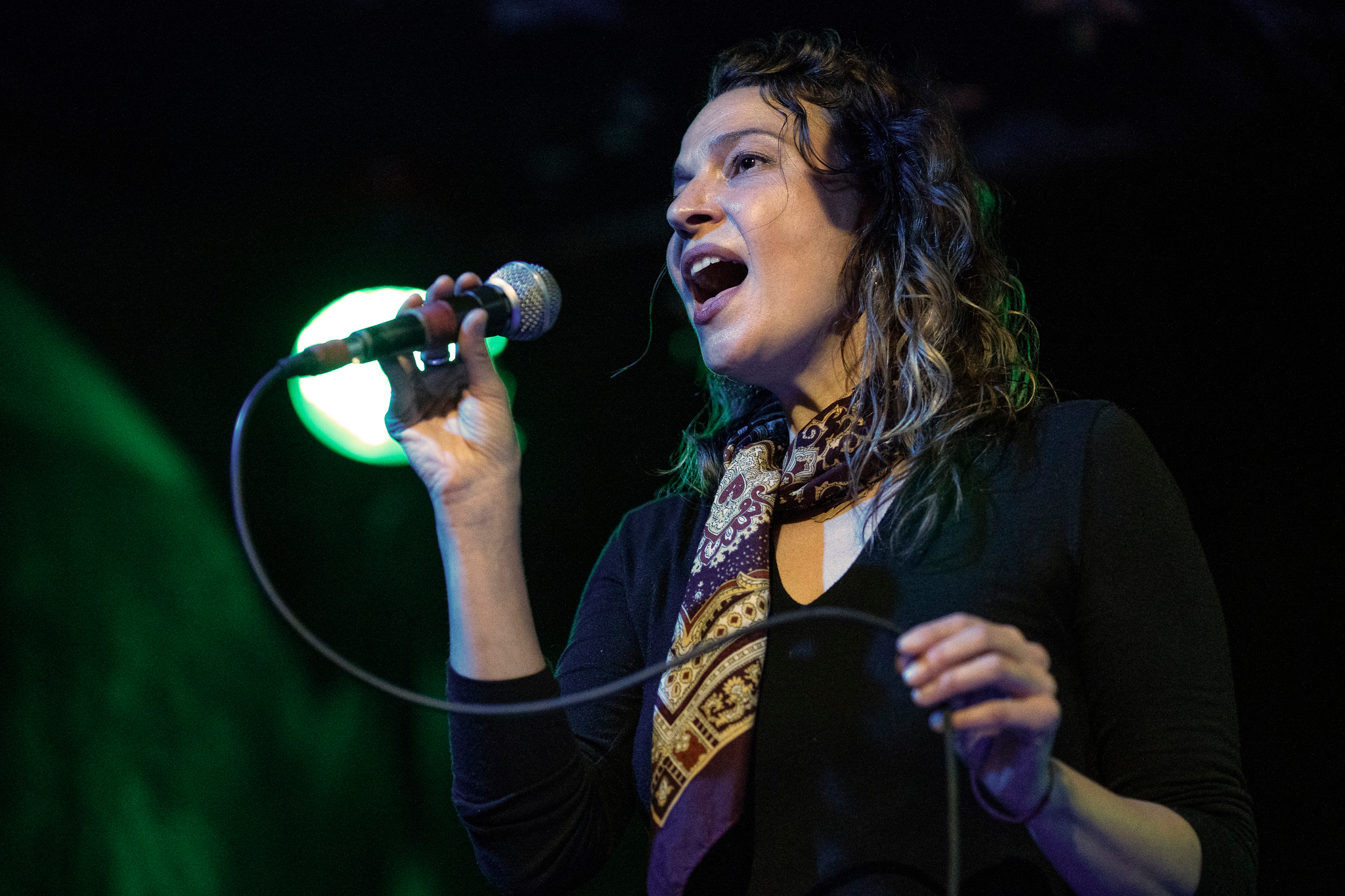 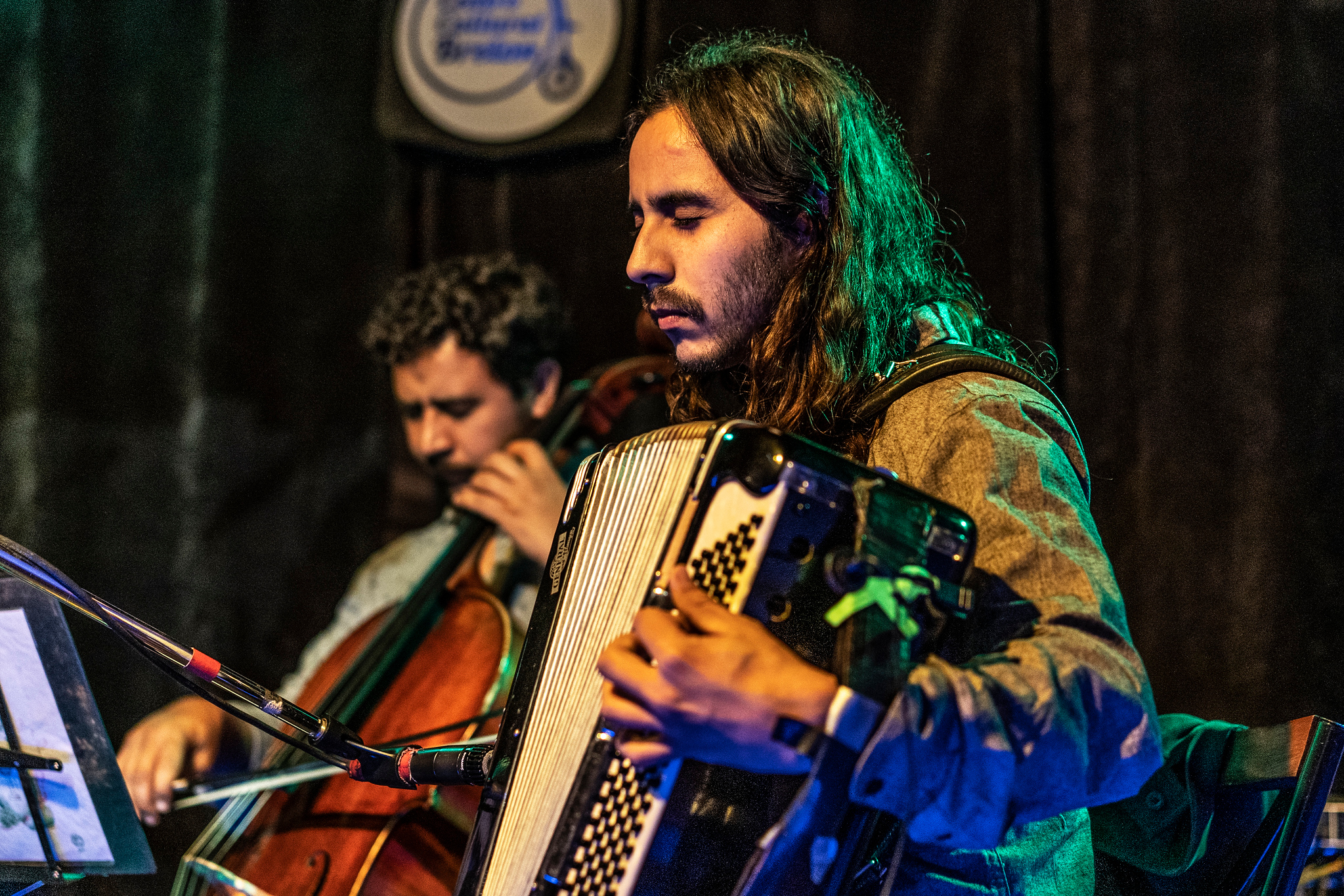 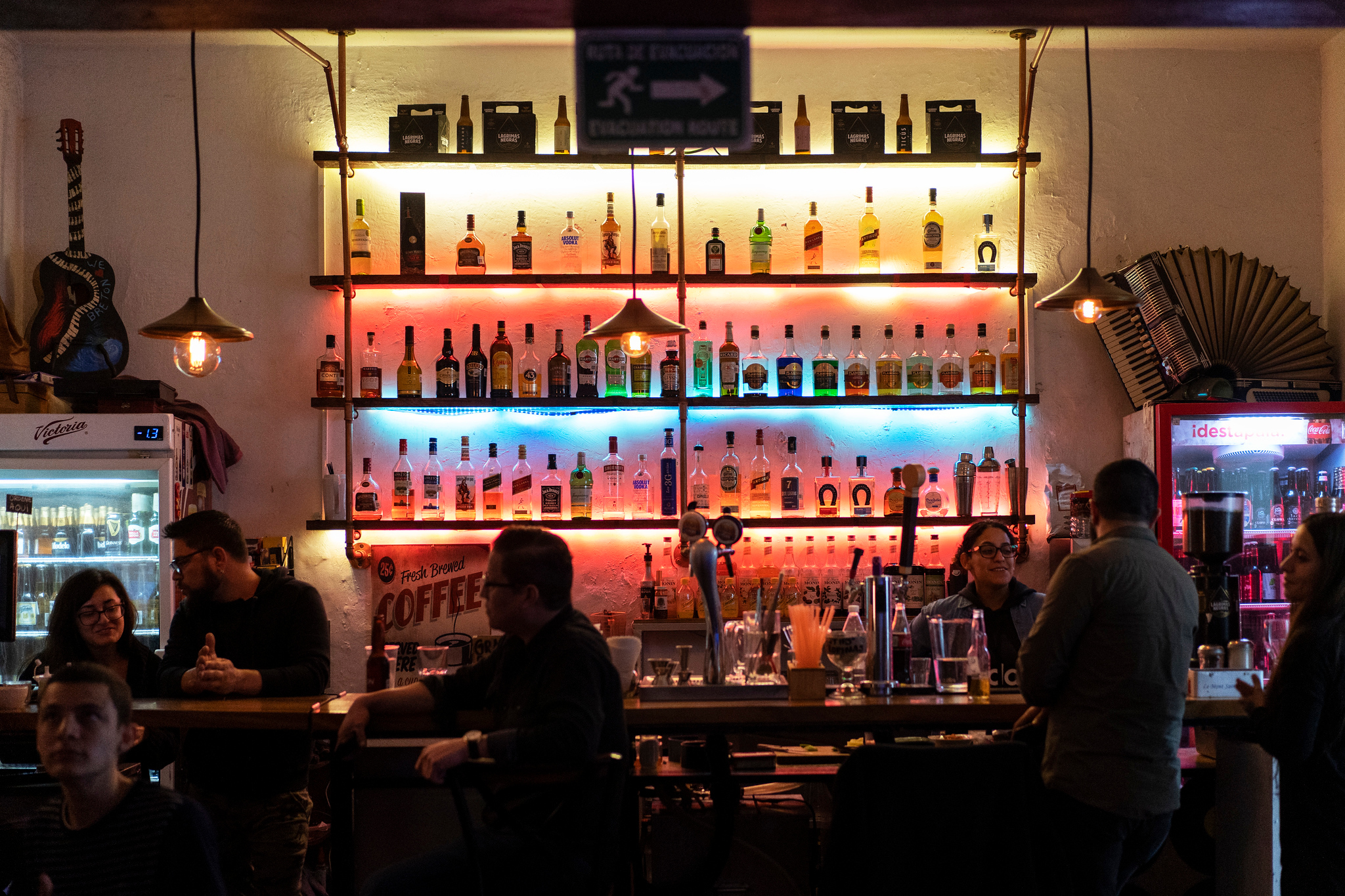 Balkan folk music in Mexico? Caught this terrific outfit of musicians playing at the Centro Cultural Breton about two blocks from our hotel. Check out Ederlezi Quartet with vocalist Valerie Holt on Facebook.

Night and the City 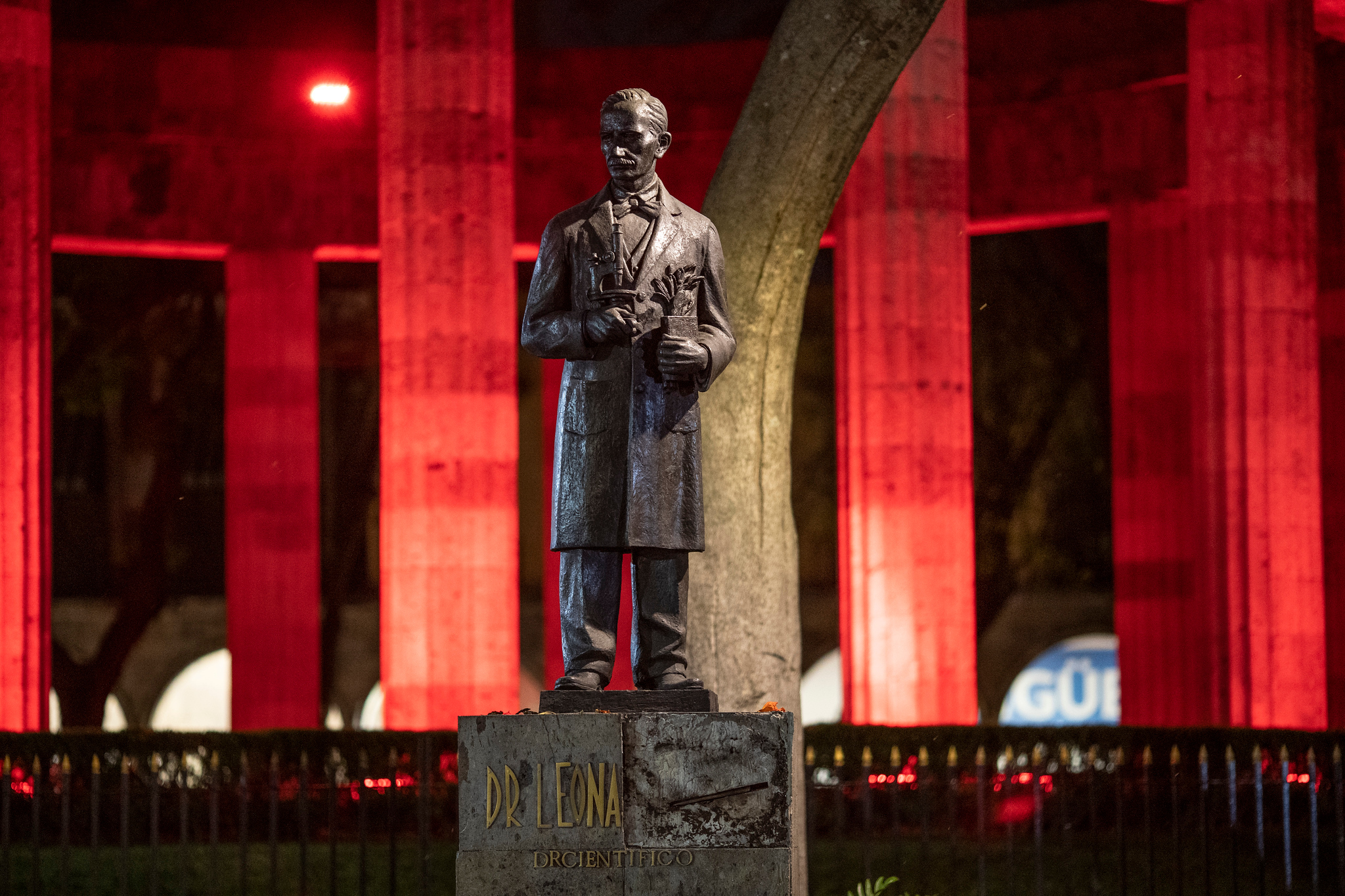 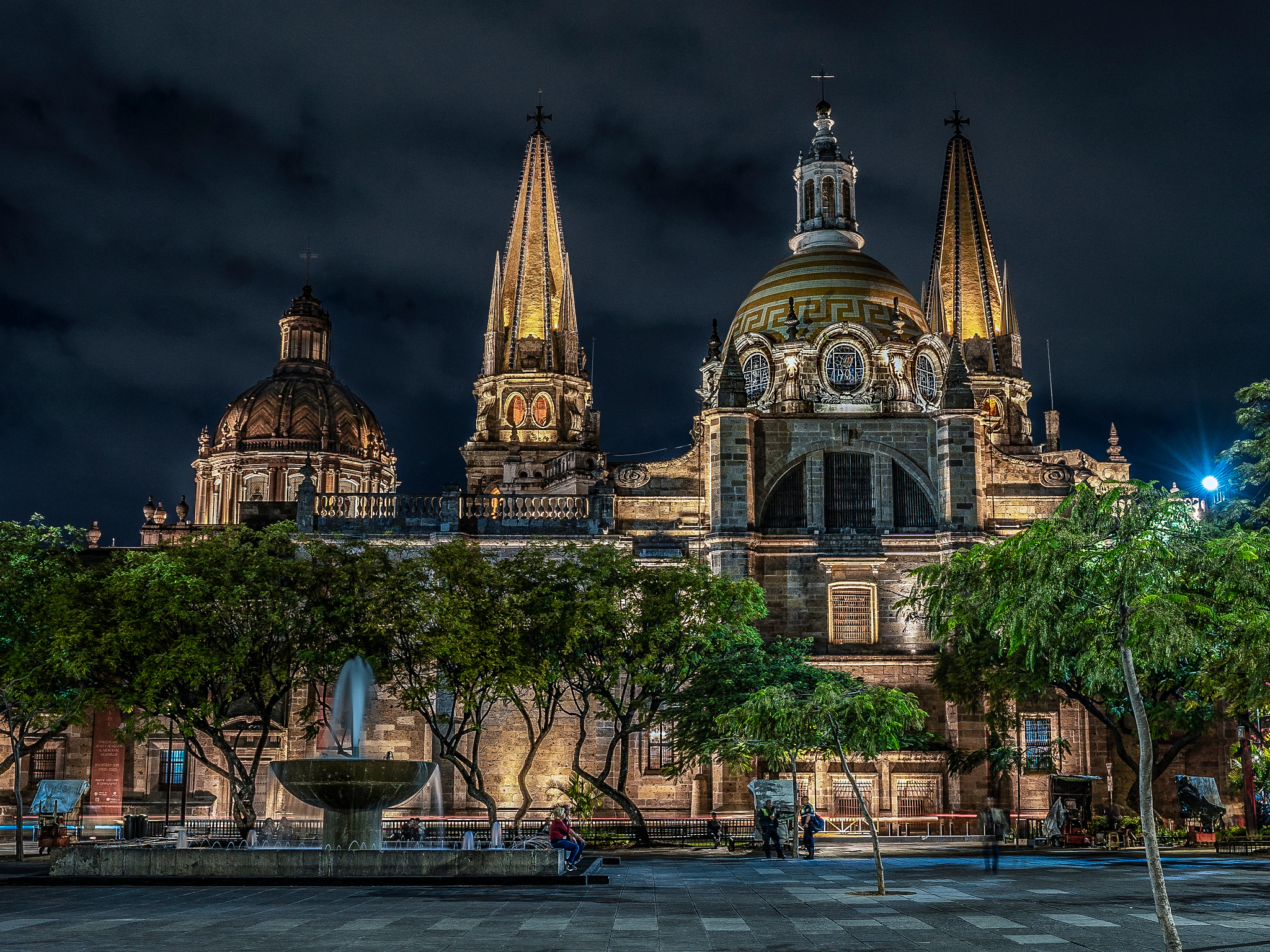 Guadalajara was an absolutely lovely city to explore and a fresh change of pace from bustling Mexico City (not that there’s anything wrong with that – just saying its bustling). If you haven’t considered Mexico’s second largest city as a travel destination, the upcoming series of photographs will surely convince you to do so (if these haven’t already done that). Stay tuned for more from Guadalajara, Lake Chapala (Mexico’s largest freshwater lake), the arts and shopping village of Tlaquepaque and Los Guachimontones, a UNESCO World Heritage site an hour’s drive from Guadalajara.

Photographs taken with the Sony A7III using (mostly) the Tamron 17-28 f/2.8 (Guadalajara is a wide angle kind of place and this lens is pretty terrific), the Canon EF 135mm f/2 using the Sigma MC-11 Mount Lens Adapter, and the Sony 55mm f/1.8 lenses (tack sharp lens well worth the price).

Check out these additional photography posts from my past visits to Mexico:

Written By DanPerezPhotography On February 5, 2020