It seems like an eternity ago but in January of 2020, my daughter and I traveled to Guadalajara for my birthday. Who could have known that the world would be turned upside down just a few months later? That said, I’m hoping anyone viewing this post is managing to keep their health (and sanity!) above sea level as we all deal with this crazy Coronavirus pandemic. We’re gonna get through this, my friends. Secondly, I want to remind you all that we will one day travel again. You know, get on a plane and fly somewhere far away? That. And with the vaccines finally being distributed, it might be sooner than we think.

So if you’ll permit me, I’m going to continue with my photo series from that trip (scroll down the page to see past posts) and turn the spotlight on Lake Chapala, Mexico’s largest freshwater lake and one of our final stops during our visit to Guadalajara.

Lake Chapala (Lago de Chapala) is located 28 miles southeast of Guadalajara, Jalisco. The lake is a critical habitat for several species of migratory birds and is home to thousands of indigenous plants and animals. The city of Guadalajara has relied on Lake Chapala as a principal source of water since the 1950s.

Since 1979, however, urban water consumption, erosion due to deforestation, and pollution by municipal, industrial and agricultural wastes have contributed to loss of lake depth (the lake has a mean depth of only 23 feet). The increase in water pollution has also had devastating effects on the ecology of the lake. Fish stock has decreased dramatically and contaminated fish stock has also posed a serious threat to the health and livelihoods of people who depend on the fish for food.

By 2007 and 2008, the level of Lake Chapala had increased drastically, though the levels have yet to surpass the levels of 1979. In 2017, however, the water quality of Lake Chapala was still assessed as a risk to public health. It’s been an ongoing battle that the locals as well as environmentalists have failed to make much progress in over the past several years.

Lake Chapala attracts nearly one million visitors each year and is home to one of the largest expat communities in Mexico, mainly American and Canadian retirees. My daughter and I were two such visitors to the lake and to prove to you what a lovely place Lake Chapala is to visit, I present my photographs in black and white (they just looked better to me than in color!). Enjoy… 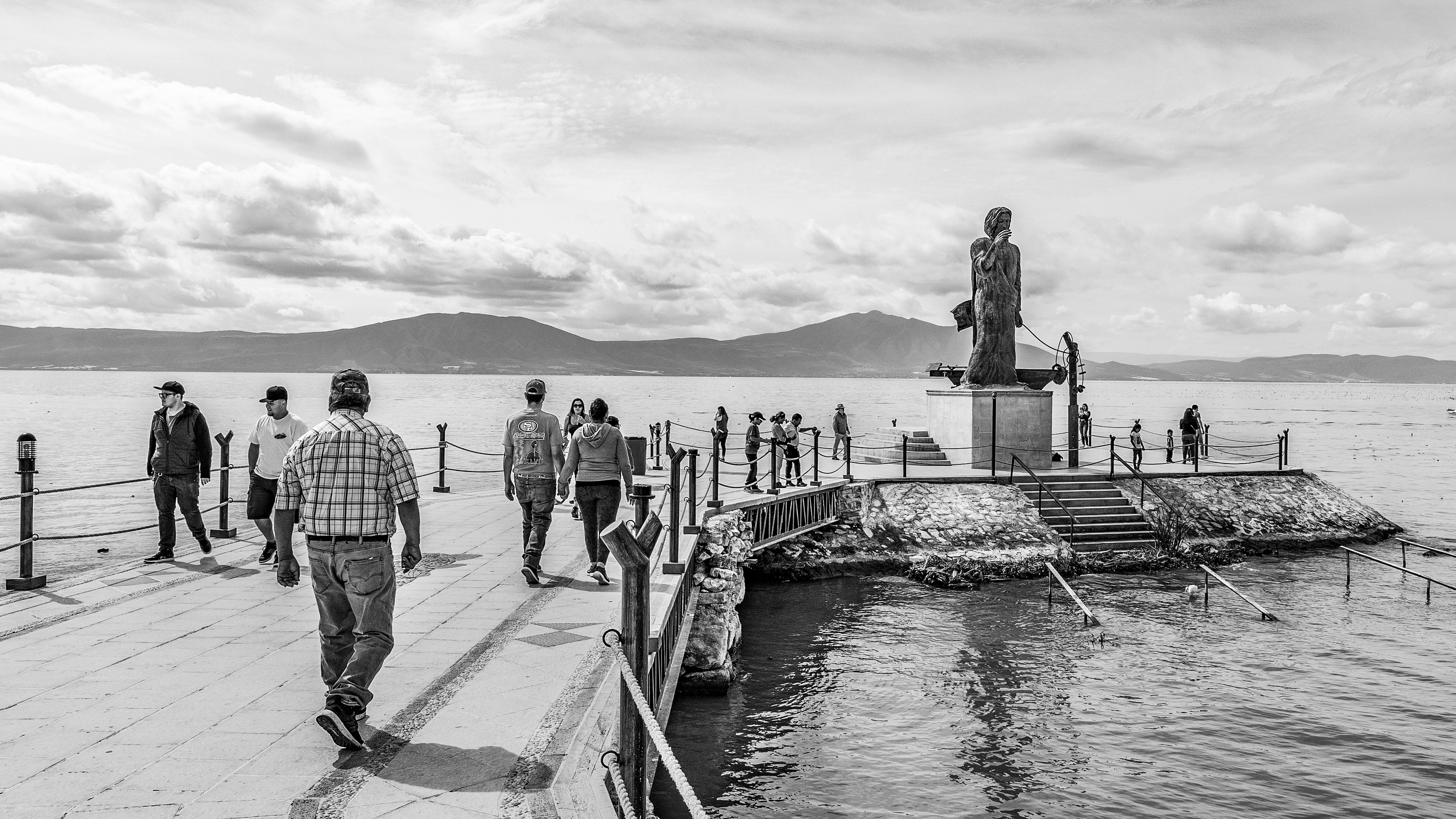 Lake Chapala’s main boardwalk leads to the “Jesús Pescador” walkway, a 70 meter bridge that leads to a large statue of Jesus (the original fisher of men). The project was completed from 2007 through 2009. 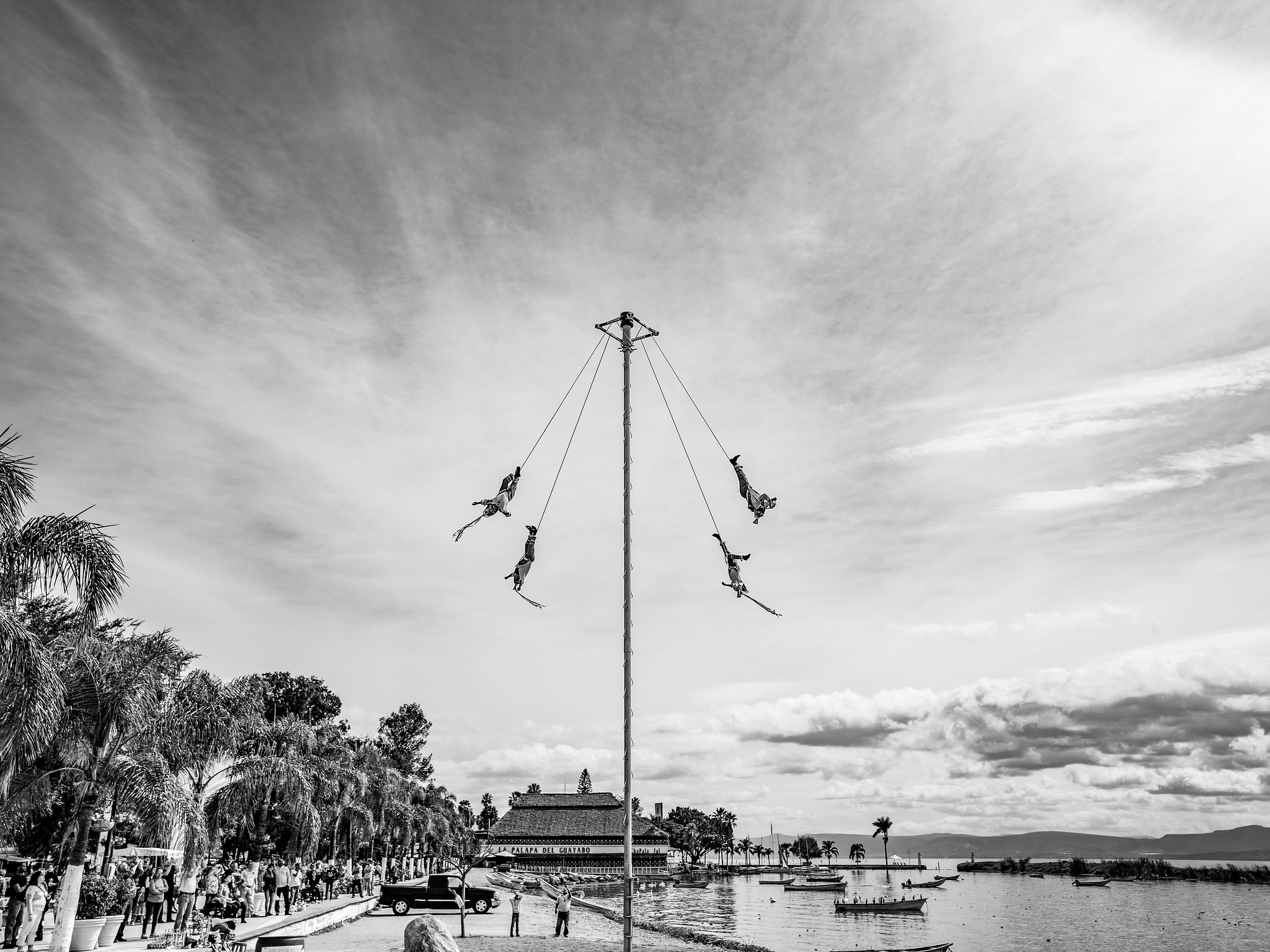 The Danza de los Voladores (“Dance of the Flyers”) is an ancient Mesoamerican ceremony/ritual that dates back 450 years. The ritual consists of dance and the climbing of a 30-meter pole from which four or five participants then launch themselves tied with ropes to descend to the ground. Traditionally, the fifth “flyer” remains on top of the pole, dancing and playing a flute or drum; but as you can see in the above photograph, one of the four flyers descended the pole playing the flute the whole way down. The ceremony was named an Intangible Cultural Heritage by UNESCO in order to help the ritual survive and thrive in the modern world. 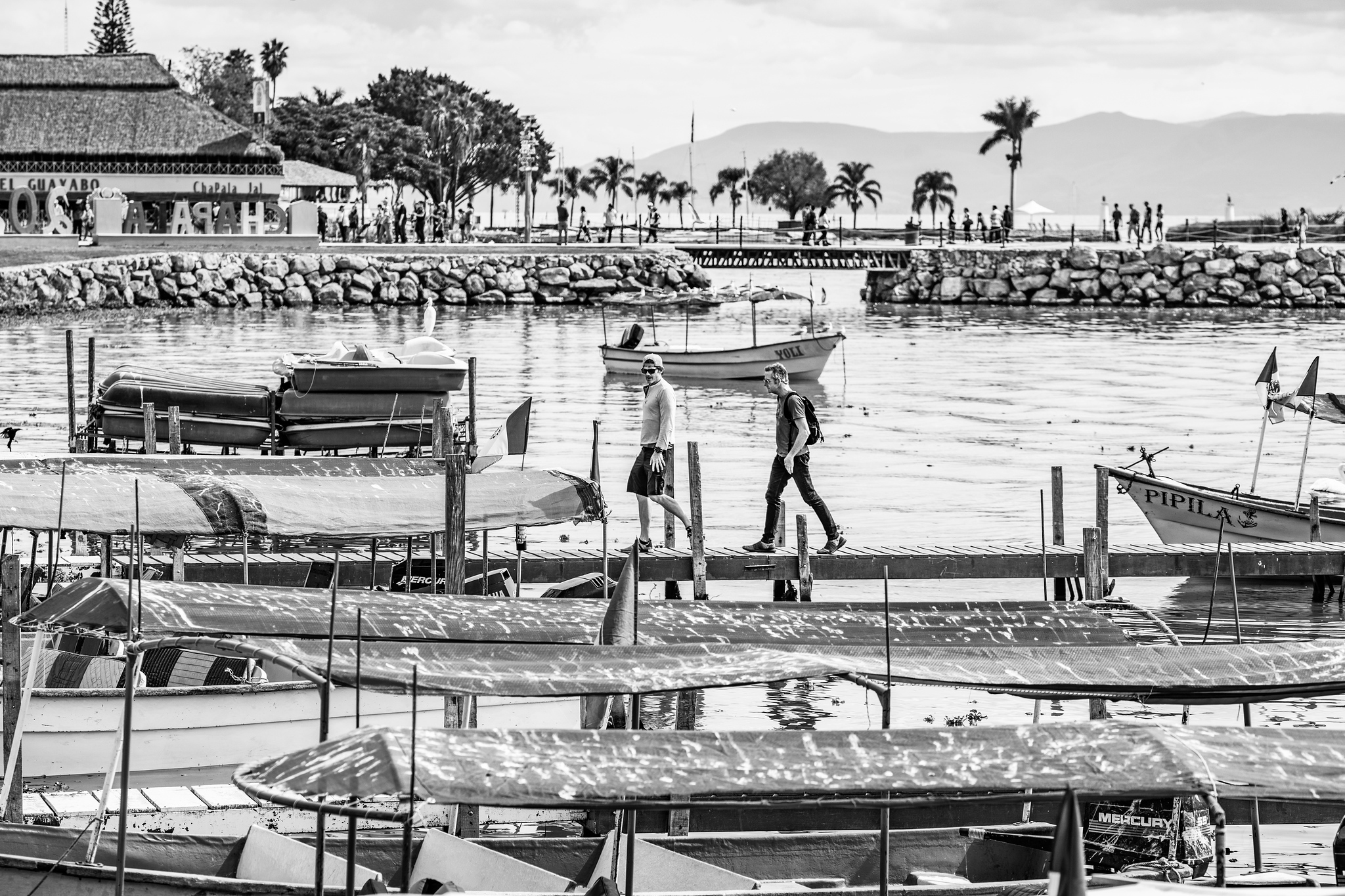 A few sights from our stroll along the boardwalk, including a statue celebrating the long history of the area’s fishermen…

From 1946 to 1956, Lake Chapala experienced a severe drought that led to dangerous water shortages. The lake’s levels were so low, people claimed you could walk from the shore to the island in the middle of the lake(!). In 1956, the entire city, with the guidance of then Cardinal José Garibi y Rivera (the first Mexican cardinal of the Catholic Church) implored the Virgin of Zapopan to literally “make it rain”. And guess what? The rains came, bringing the lake to its normal pre-drought level. A giant statue in her honor adorns the entrance to the boardwalk…

As we were leaving the lake, I spotted this man about to enjoy a plate of tacos he purchased from a street vendor near the entrance to the boardwalk. It’s probably my favorite photograph of the day.

Hope you all enjoyed the photographs. Lake Chapala is a lovely place to visit should you ever find yourself in or around the city of Guadalajara (and you really, really should find yourself there one day).
And for those of you who much rather see Lake Chapala in color, you can do so HERE.

Written By DanPerezPhotography On March 25, 2021

The "Magic Town" of Tlaquepaque Mexico

So cool! I love to see you and your daughter spending that time together. Also, thank you for all of the history lessons. Keep it up!

Coming from you, Bryan, is very high praise. Thank you, means a lot. And yes, father/daughter time has been extra special since losing Madelyn. More trips are forthcoming once we get back to “normal” 🙂

So much to photograph and sights to explore in Mexico. 55 years living in San Francisco and ready to begin life again and Mexico has been heaven to begin anew. Now in Ajijic 20 years and I always have a new place to explore. Viva Mexico! Ajijic

Albert, walking the streets and visiting the shops of Ajijic, I heard plenty of English. Seems like a lovely place to retire to. You might see me there in a few years 🙂

Yes I love Chapal my family is from there and have a lot of history their, I hope to move there in 2 years. Thanks for the pics wish they were in color

Mary, it’s a lovely city. Here are the photographs in color > https://danperezphotography.smugmug.com/Lago-de-Chapala
Enjoy 🙂

Hi. I really liked your story. My husband and I happen to love along the South shores of Laguna De Chapala. We first moved to Mexico in

2008. Spent our first year I’m Jocotepec. 12 years later we now live in a little town that’s called Puruagua. Love the area! I too wonder why nothing has been done to change the lakes future. I still see garbage being dumped into the lake; daily from all the things you speak of in your story. Come on people! Wake up and look at what we get from water everywhere. The plants that gives us the air we breathe, the food we eat & the stuff we drink all comes from; WATER!?

Thanks for the blogposts and great pics of Chapala and Ajijic. Since 2014 and before COVID prevented my return in 2020, I was blessed to live in Ajijic about 6 months of the year (winter and summer) when the climate there is either warmer or cooler than Las Cruces NM. I have been involved with the Lake Chapala Center for Spiritual Living, serving both the expat community you mentioned and the local Spanish speaking residents as well. Also I read your blogpost on GUACHIMONTES & have a couple of suggestions for English speaking tourists. 1. arrange with the gatekeepers at the ticket booth on the lower level for the car that brought you to drop you off at the top and then return back to the lower level parking lot. 2. once at the top, find an English speaking guide (or Spanish if that is your preferred language) 3. go to the museum first and watch the orientation movie in your preferred language and tour the museum with your English speaking guide ( all written descriptions info is in Spanish only) 4. with your guide tour the grounds and maybe return to the museum/gift shop 5. In addition to your sun gear, bring water & food, as on the grounds there is no restaurant. There are some eating places on the road once you are back at the lower elevation and departing, so watch for restaurant signs.

So true, especially in a lake and town so lovely.
Thanks for your comment 🙂

Somehow the black and white motif conveys a feeling of innocence, a nostalgic feeling. Thank you for the lovely pics. I live in Chapala Centro.

Jeany, glad you enjoyed them – and I totally agree 🙂