The Boca Raton Museum of Art (In Pictures)

Had my mother visiting me from the Bronx a few weeks ago and the day before she was to return home, I kept my schedule free for a day out with her and my daughter. Turned out that after weeks of lovely weather, it started to rain (that heavy South Florida rain) just as we were getting ready to head out. What to do? Something indoors. But what? An art museum I hadn’t visited yet? How about the Boca Raton Museum of Art? But wait, I once took my mother to NYC’s famed MOMA and she pretty much hated it. So what now? Screw it, I thought – if she hates the museum, at least we can grab a nice dinner at Mizner Park where the museum is located. So off we went.

The roots of the Boca Raton Museum of Art reach back to the late 1940s, when a group of socially active women came together to form the town’s first organization, a civic club, with the goal to build a small library. Two library board members, philanthropist Hildegarde Schine and socialite Roberta MacSpadden had been appointed to organize an Open House. They met in the 1920s Town Hall, where an estimated 1,000 people flooded the Library Open House, which included an exhibition of paintings, borrowed from friends and loaned by galleries from Palm Beach to Miami. There and then, the Library Association decided they should form an organization to further this interest in the fine arts. In 1950, The Art Guild of Boca Raton was born.

In 1961, construction of the first Art Guild building commenced, and in the fall of 1962, the Art Guild dedicated the building on Palmetto Park Road that the Museum occupied until January 2001, and that now houses its school of art. On January 24, 2001, the new Museum officially opened to the public in downtown Boca Raton’s Mizner Park. The 44,000 square foot facility makes possible increased exhibition, education and collection galleries; to add public meeting and program areas; and to enhance fourfold the Museum’s programming capabilities. It is a permanent architectural symbol of the City’s pride in its past, commitment to the present, and faith in the future.

When we arrived, we were greeted by the most enthusiastic and friendliest young lady that I’ve ever been greeted by in my 15+ years in South Florida (was I really in Boca Raton?). She got us off on the right foot and even got my mother somewhat excited about being at the museum. So how did it go, you ask? Lovely. The museum was a very pleasant surprise and a terrific way to spend a few hours out of the heat (or rain) of South Florida. And my mom? She actually really liked it. I mean, the Boca Raton Museum of Art ain’t the MOMA but if it can make my mom happy, it’s got something good going for it.

Underwater photography from the 1940’s by Bruce Mozert

Images from Michael Smith’s, Excuse Me!?!…I’m Looking for the “Fountain of Youth” exhibit 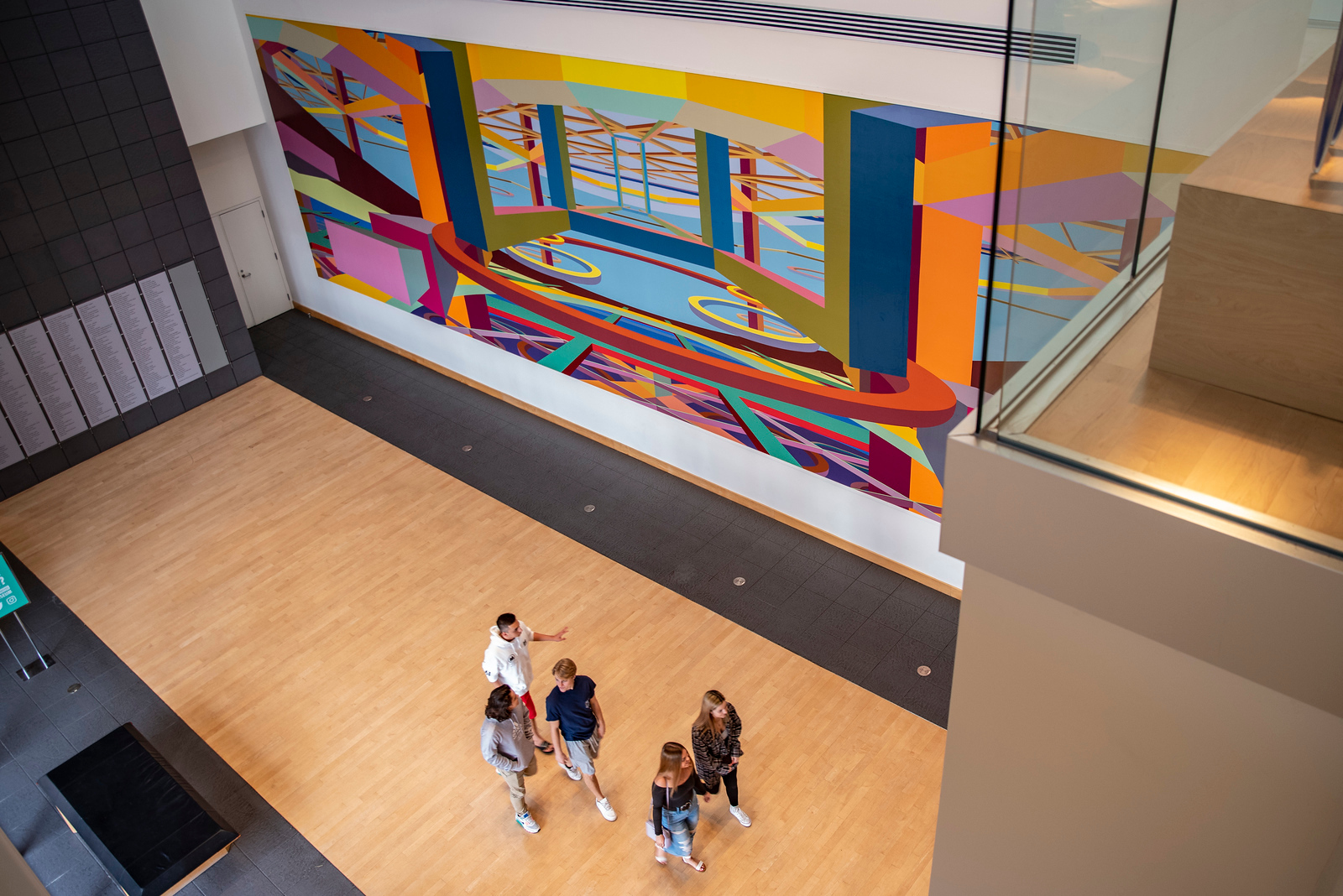 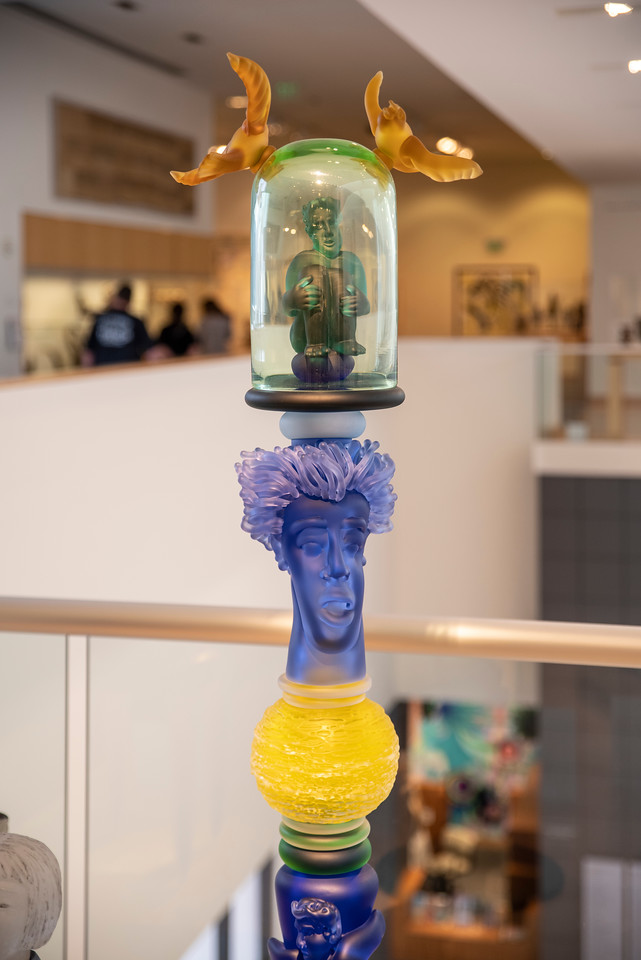 My daughter having some fun with “Puck 1” (2016), a self-portrait of Brazilian-born artist Vik Muniz as the supernatural trickster from Shakespeare’s A Midsummer Night’s Dream 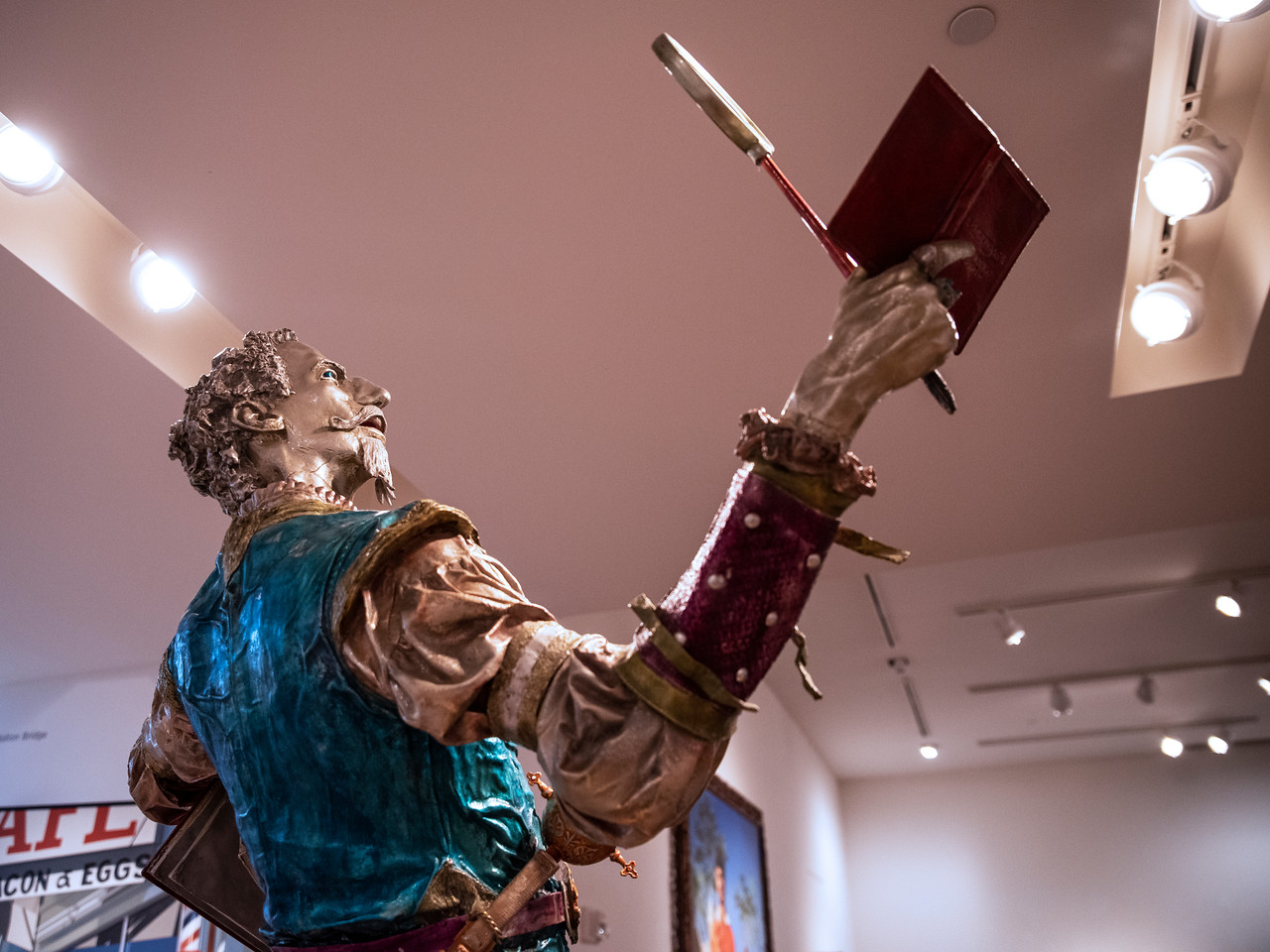 The flamboyant sculpture “Don Quijote Segunda Parte” (1987) by Izhar Patkin is one of the centerpieces of the museum’s second floor. Patkin is an Israeli artist who has lived in New York since the late 1970s

“Delacroix 1830–Chaos and Purpose” (1993) by NYC born artist Larry Rivers is an interpretation of and homage to the French Romantic painter, Eugene Delacroix (1798–1863) and his 1830 masterpiece “Le 28 juilet: La Liberté guidant le people” (Rivers even inserted a portrait of the older artist in the middle foreground). To construct these monumental relief paintings, Rivers cut the raised forms out of foam board, layered them atop one another, covered them with canvas and then painted the entire surface.

“Rogers Street” (c. 1920) by Polish born artist Theresa Bernstein, who emigrated to the United States and lived to be 111 years old(!) 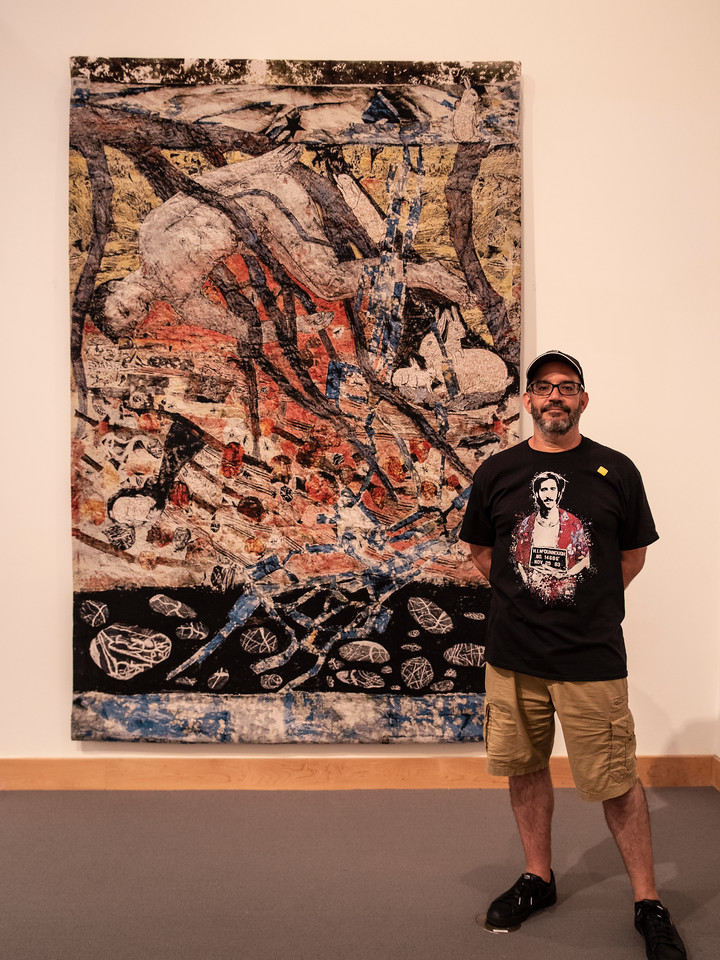 One of my personal faves, “Underground” (2012), a tapestry by West German-born American artist Kiki Smith, whose work addresses the themes of sex, birth and regeneration. 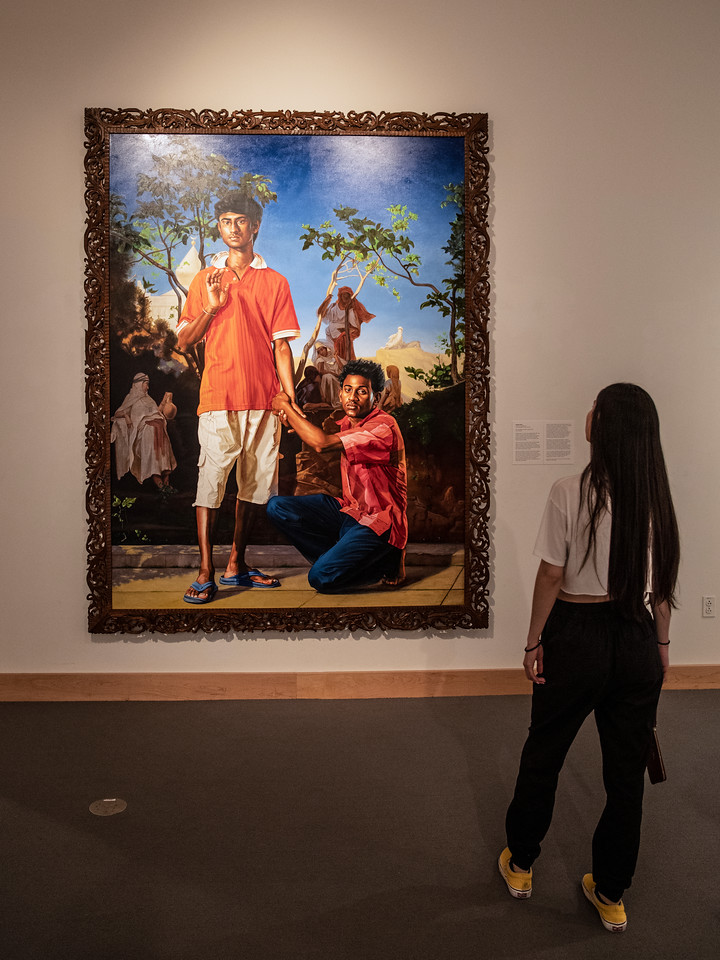 Another one of my faves, “Annoyed Radha With Her Friends” (2010) by Los Angeles native and New York based visual artist Kehinde Wiley, who was chosen by Barack Obama to paint an official portrait of the former president to appear in Smithsonian’s National Portrait Gallery

Woman admiring “Dilemna” by artist Charles McGill (1964-2017) made from discarded golf bags and equipment. “I find the golf bag to be a very political object due to its historical associations with class…and racial injustice. It is both an object and subject that lends itself well to found object abstractions and assemblages that address these well-chronicled complexities,” said McGill, who succumbed to cancer at the age of 53. 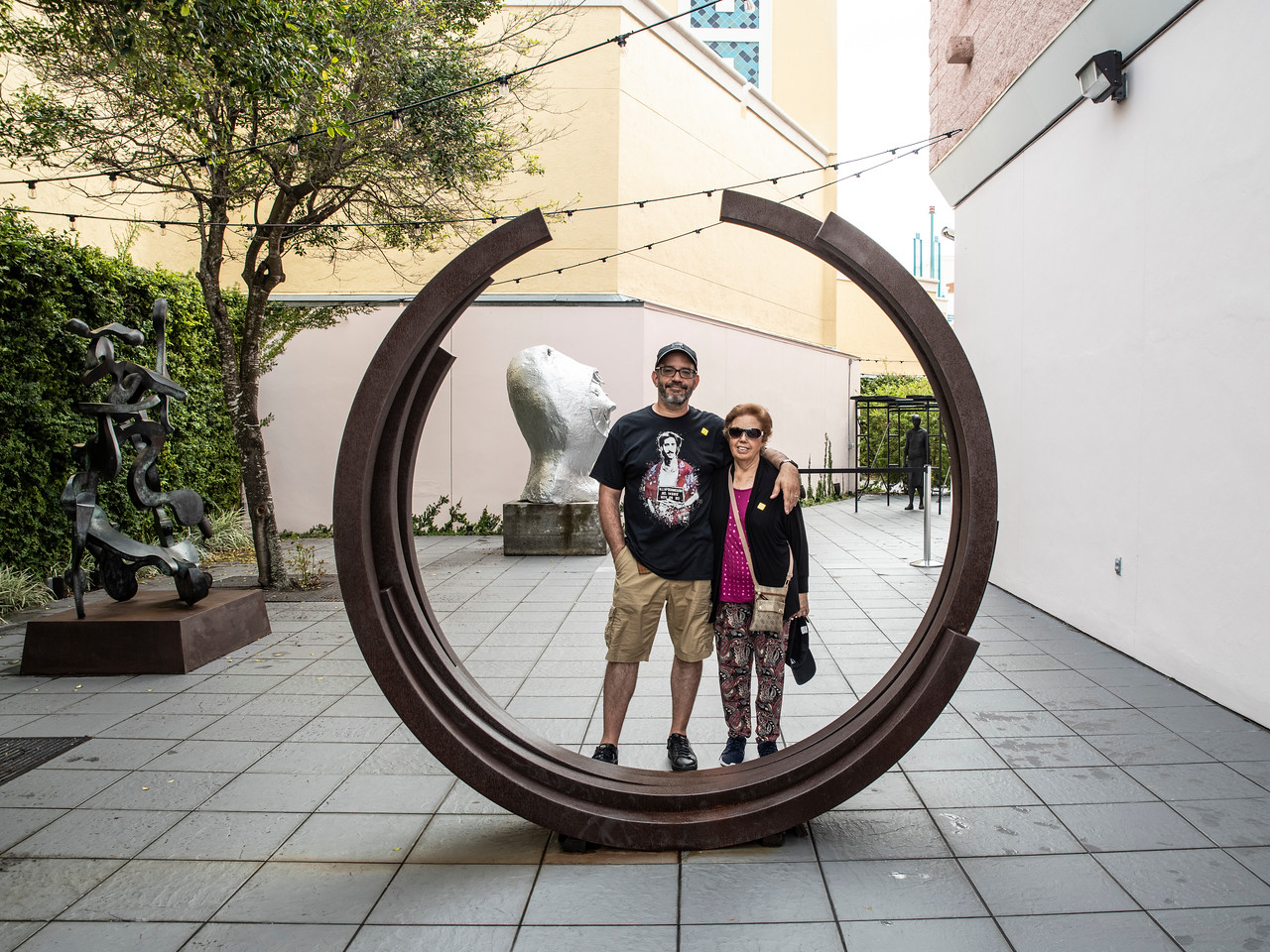 Before we left, the rain let up and we were able to walk around the museum’s Sculpture Garden. My mom at this point? Pleased.

“Marty’s Cube” is in the entrance courtyard of the Boca Museum by sculptor Tony Rosenthal (1914-2009), whose similar outdoor sculpture “Alamo” is one of the centerpieces of Astor Place in NYC.

A visit to the museum’s gift shop before leaving…

Let me say this again – the Boca Raton Museum of Art was a very pleasant surprise and a must-see for art lovers based in South Florida or visiting the region. This coming from someone who’s visited the MOMA, the Solomon R. Guggenheim, The Whitney Museum of American Art, the Brooklyn Museum and the Metropolitan Museum of Art in New York City. I’ve also visited Nacional Centro de Arte Reina Sofía and Thyssen-Bornemisza Museum in Madrid, National Gallery of Bosnia and Herzegovina in Sarajevo, Museo de Arte de Ponce in Puerto Rico, National Museum of Art of Romania, and the Museo Nacional de Arte and Museo Soumaya (which replicates the spiral design of the Guggenheim) in Mexico City. Yeah, I’ve got a thing for art museums.

Written By DanPerezPhotography On April 4, 2019

The 15th Annual Coral Springs Festival of the Arts (In Pictures)

Very cool, especially to experience it with your family.

Thanks, Bry – yeah, it was pretty cool 🙂

I am so glad it started to rain and you all decided to step into the Boca Raton Museum of Art. So enjoyed your article that was filled with good info and some wonderful “pictures “ of the art works.
Bravo and thanks.