Here are a few images from my visit (with Mrs. Perez) to Bosnia and Herzegovina. This once war-torn country has become one of the most beautiful places (and one of the most economical) to visit in all of Europe. It is projected to have the third highest tourism growth rate in the world until 2020. These images should clearly illustrate why Bosnia and Herzegovina is a place you really should visit.

We’ll start at our first stop, Konjic, a town and municipality located in northern Herzegovina, around 31 miles southwest of Sarajevo. The city is one of the oldest permanent settlements in Bosnia, dating back almost 4000 years. It’s main attraction is the Konjicka Stara Cuprija (Old Bridge), which was built between 1682 and 1683. 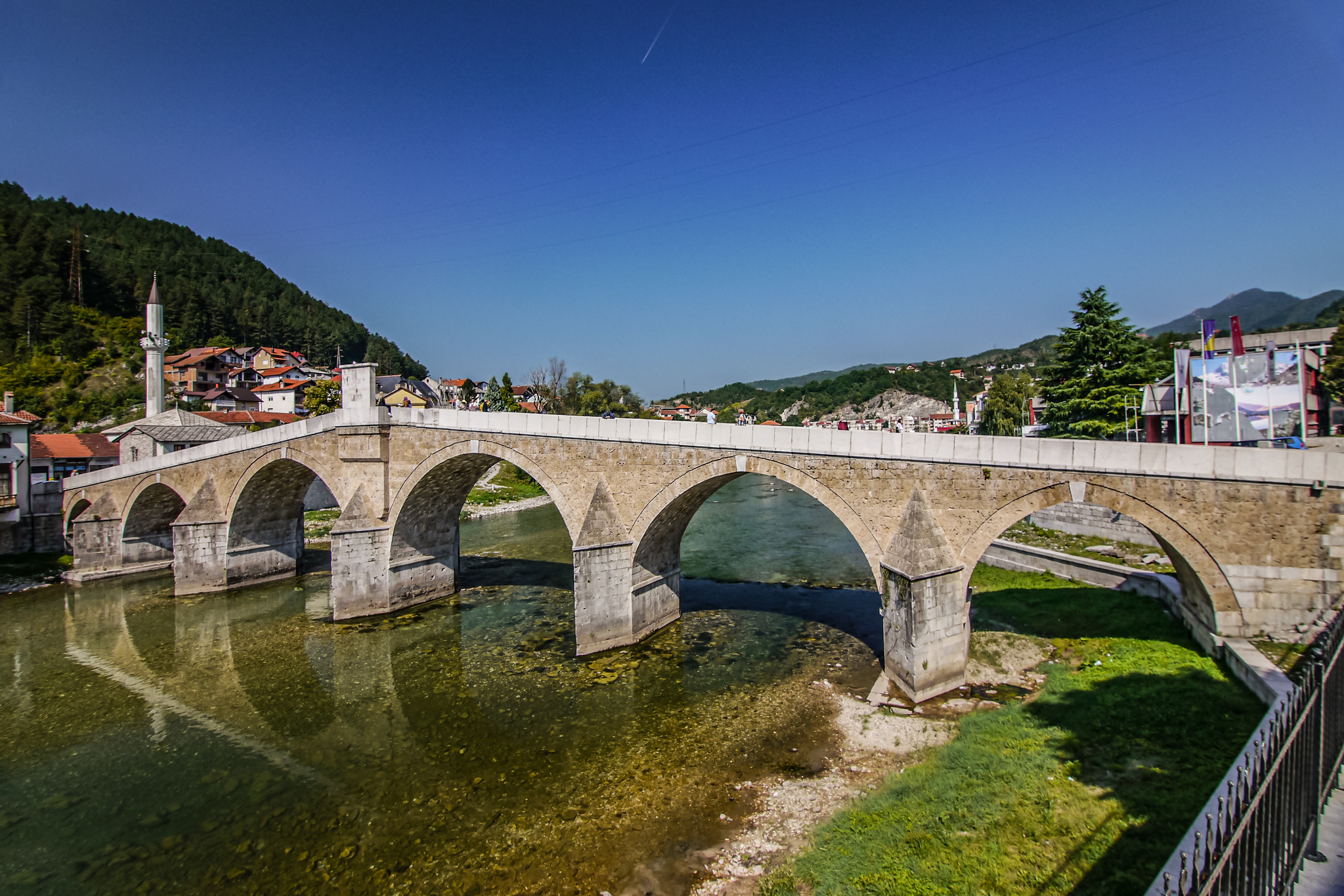 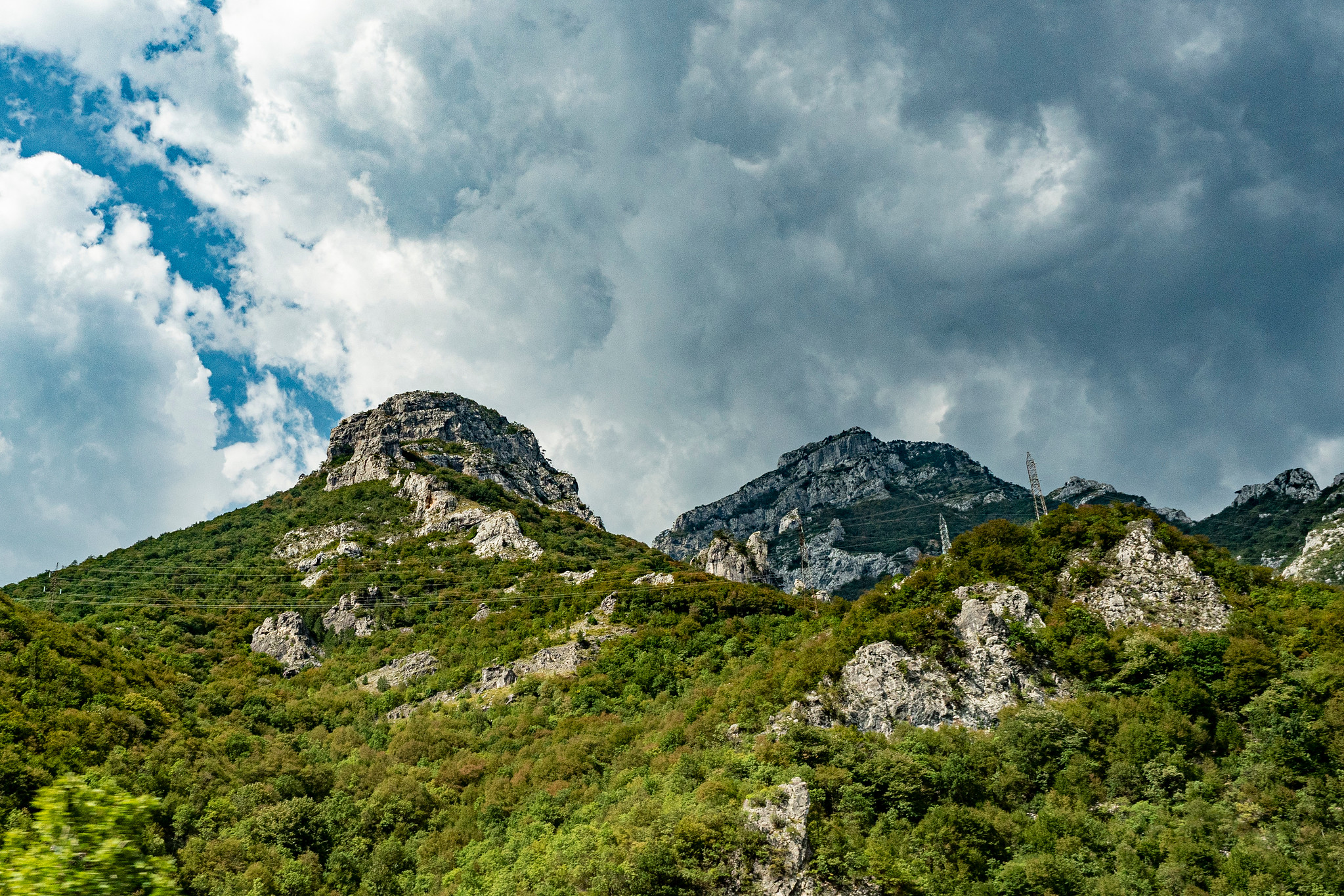 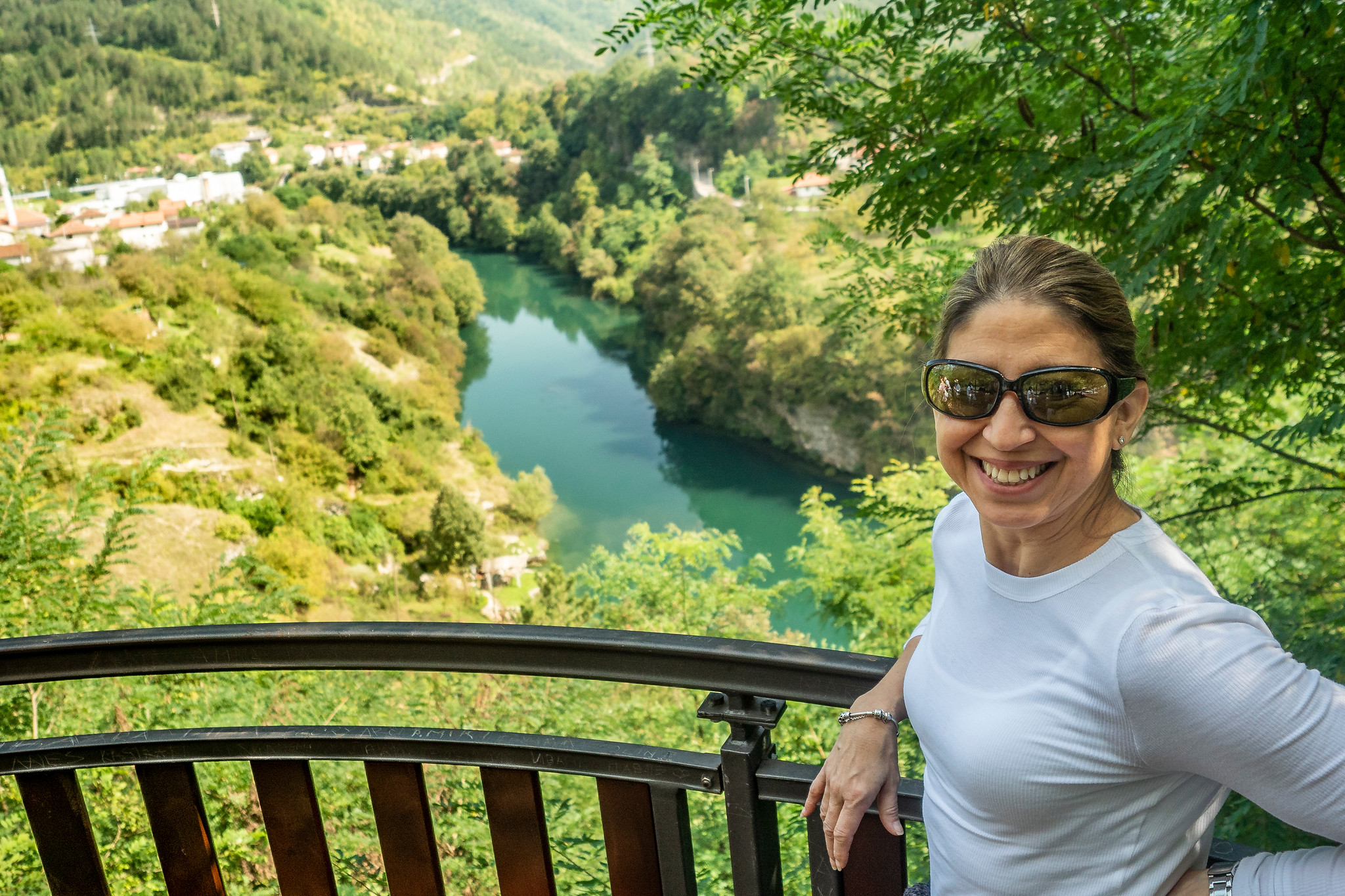 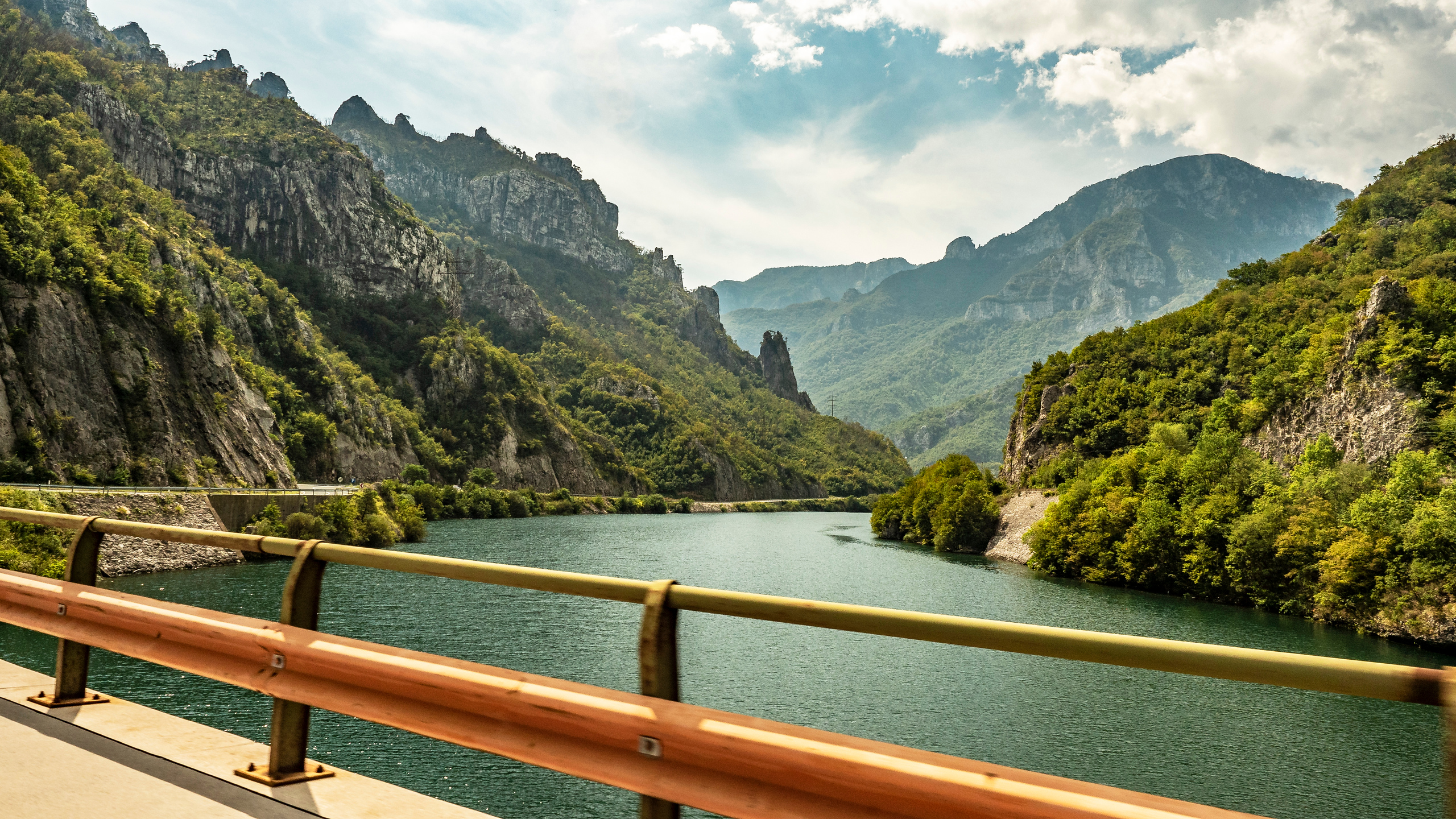 Our next stop was Mostar, the most important city in the Herzegovina region and its cultural capital. The drive from Konjic took us through breathtaking mountain views and several stops with scenic views…

Our first sight in Mostar was the Roman Catholic Church of St. Peter and Paul, which dates back to 1866. It was destroyed during the war in 1992. The new structure (2000) is built on the foundations of the previous building. 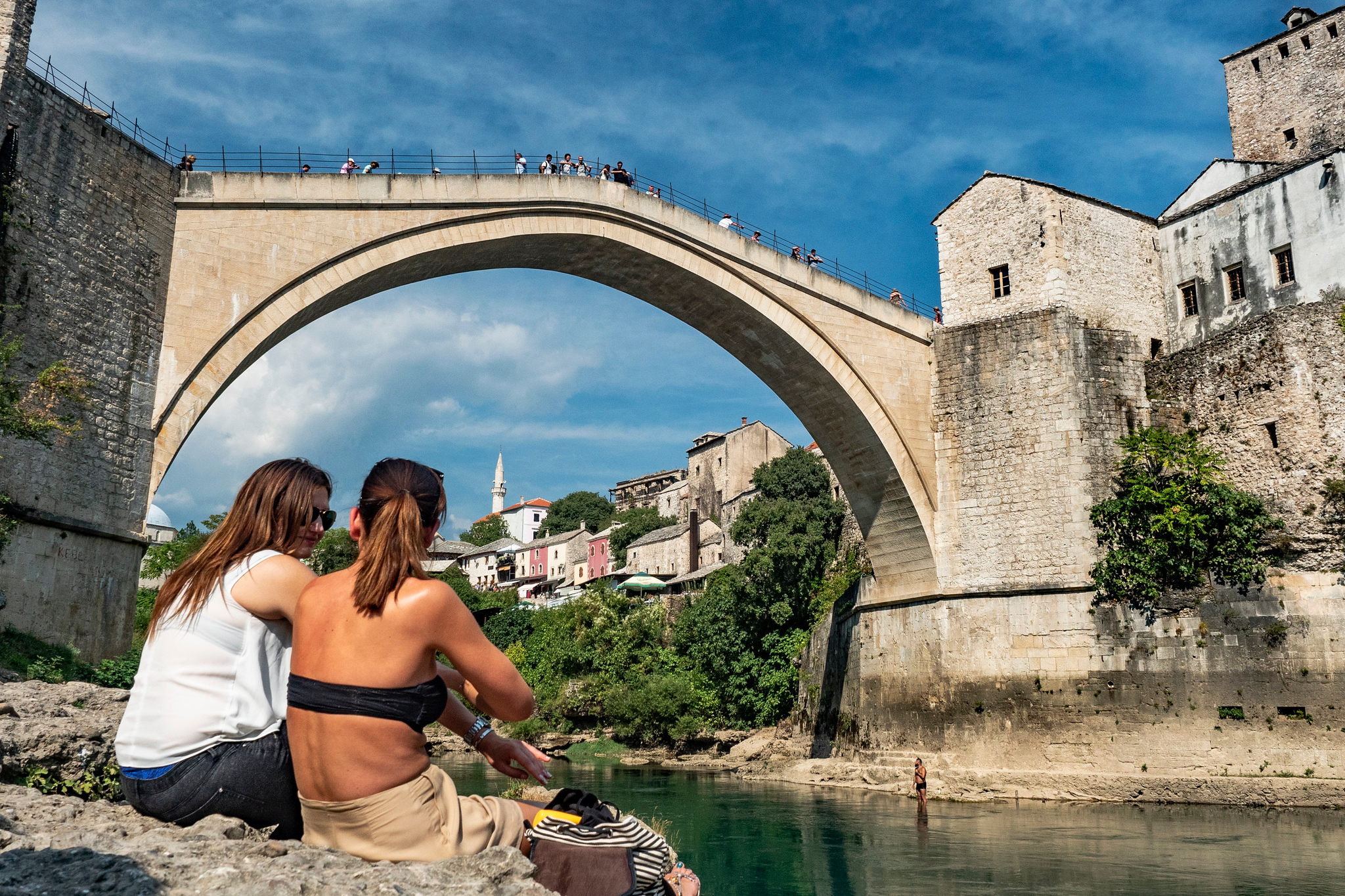 Mostar was named after the bridge keepers (mostari) who in medieval times guarded the Stari Most (Old Bridge) over the Neretva River. The Old Bridge, built by the Ottomans in the 16th century, is one of Bosnia and Herzegovina’s most recognizable landmarks, and is considered one of the most exemplary pieces of Islamic architecture in the Balkans. 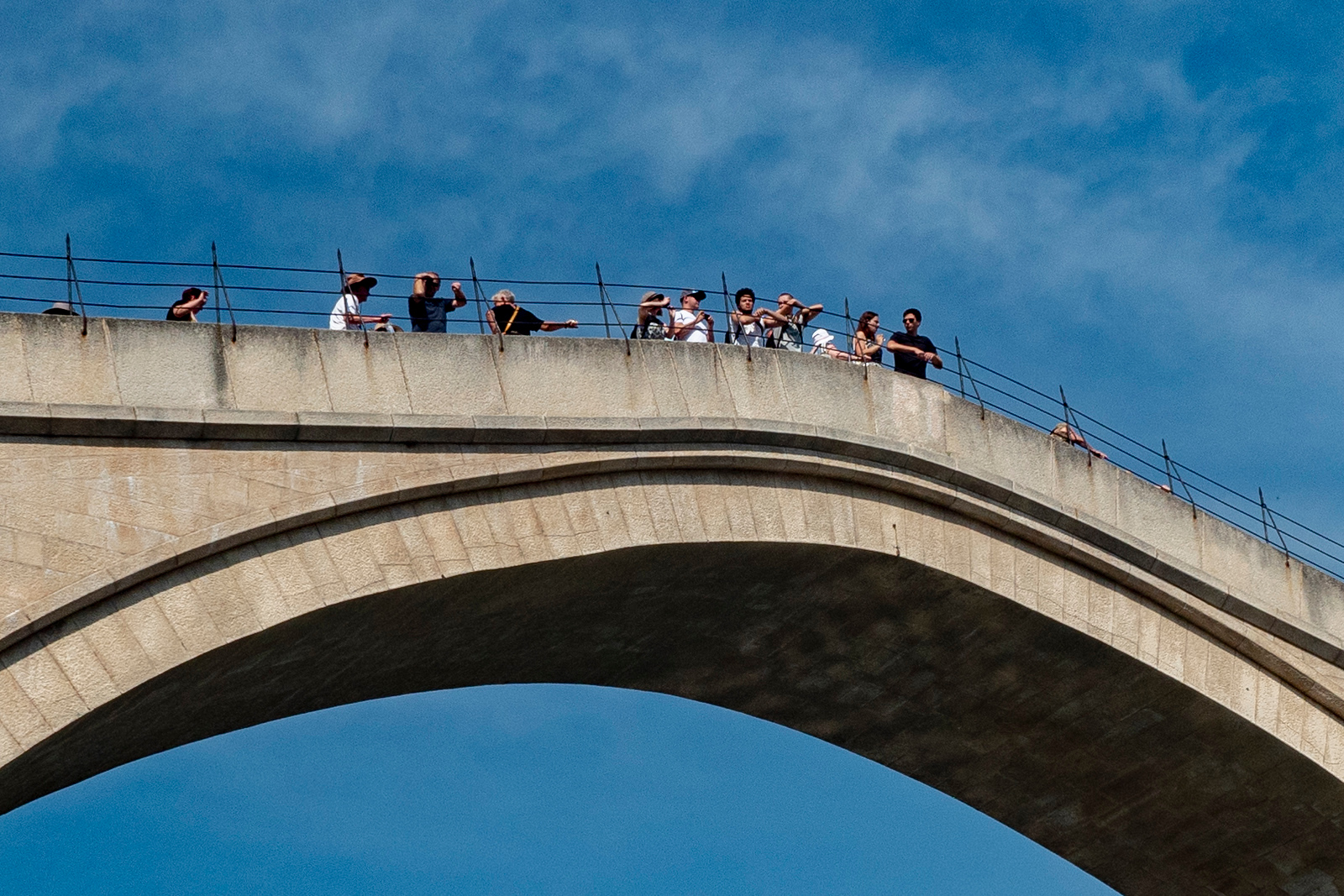 The Old Bridge stood for 427 years until it was destroyed on November 1993 by Croat forces during the Croat–Bosniak War. Subsequently, a project was set in motion to reconstruct it, and the rebuilt bridge opened on July 23, 2004. In July 2005, UNESCO (the United Nations Educational, Scientific and Cultural Organization) inscribed the Old Bridge and its closest vicinity onto the World Heritage List (sites are selected on the basis of having cultural, historical, scientific or some other form of significance, and they are legally protected by international treaties).

Stunning views from the bridge… 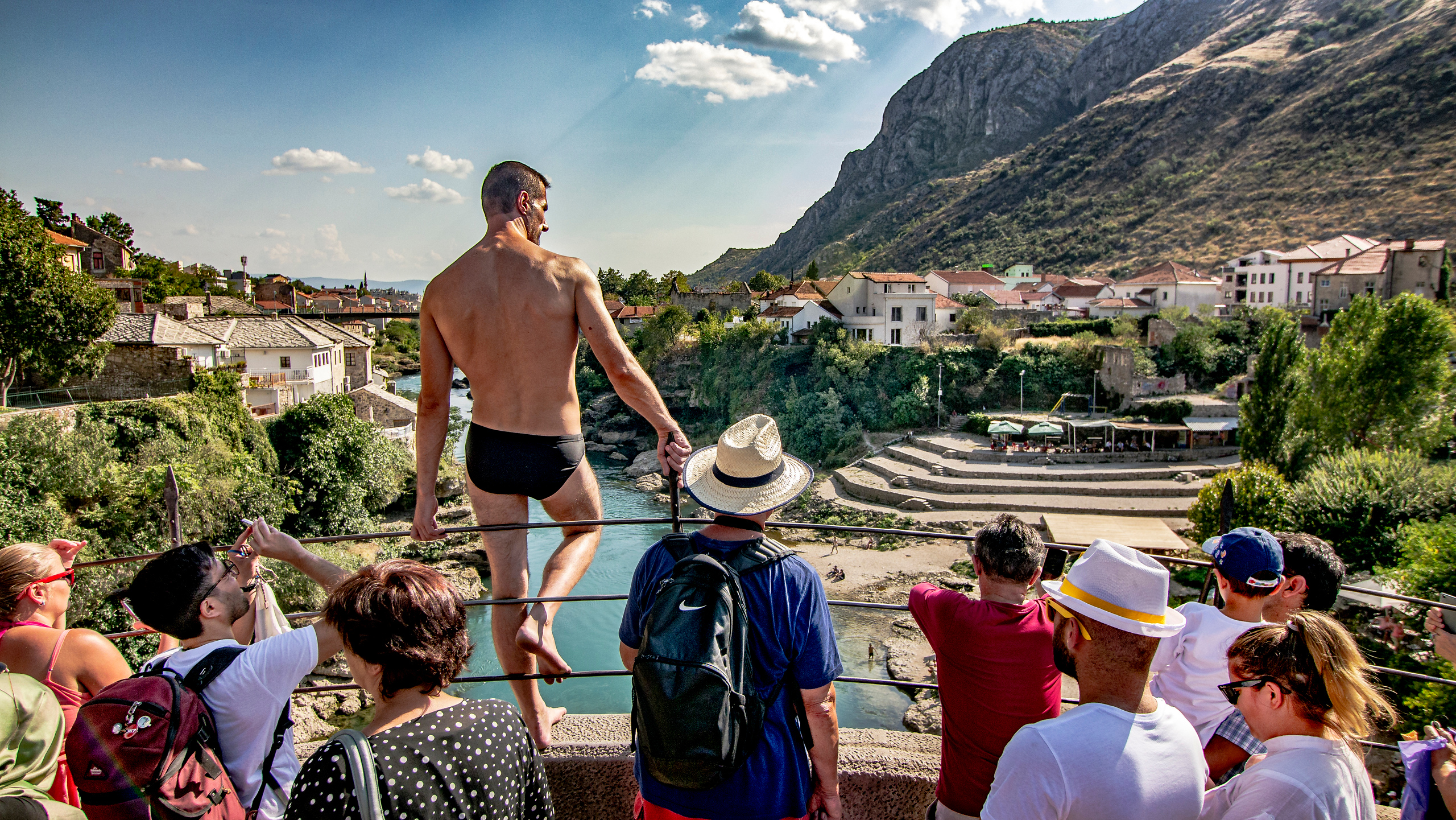 Diving off the bridge is actually legal. There is a diving competition that takes place in Mostar every July. Here, a daring diver waits as his partner collects any donations from tourists eager to see someone take the plunge (I mean, if you’re gonna dive, why dive for free?). The collection took too long and we were on a tight schedule so we missed it (if it ever really happened). 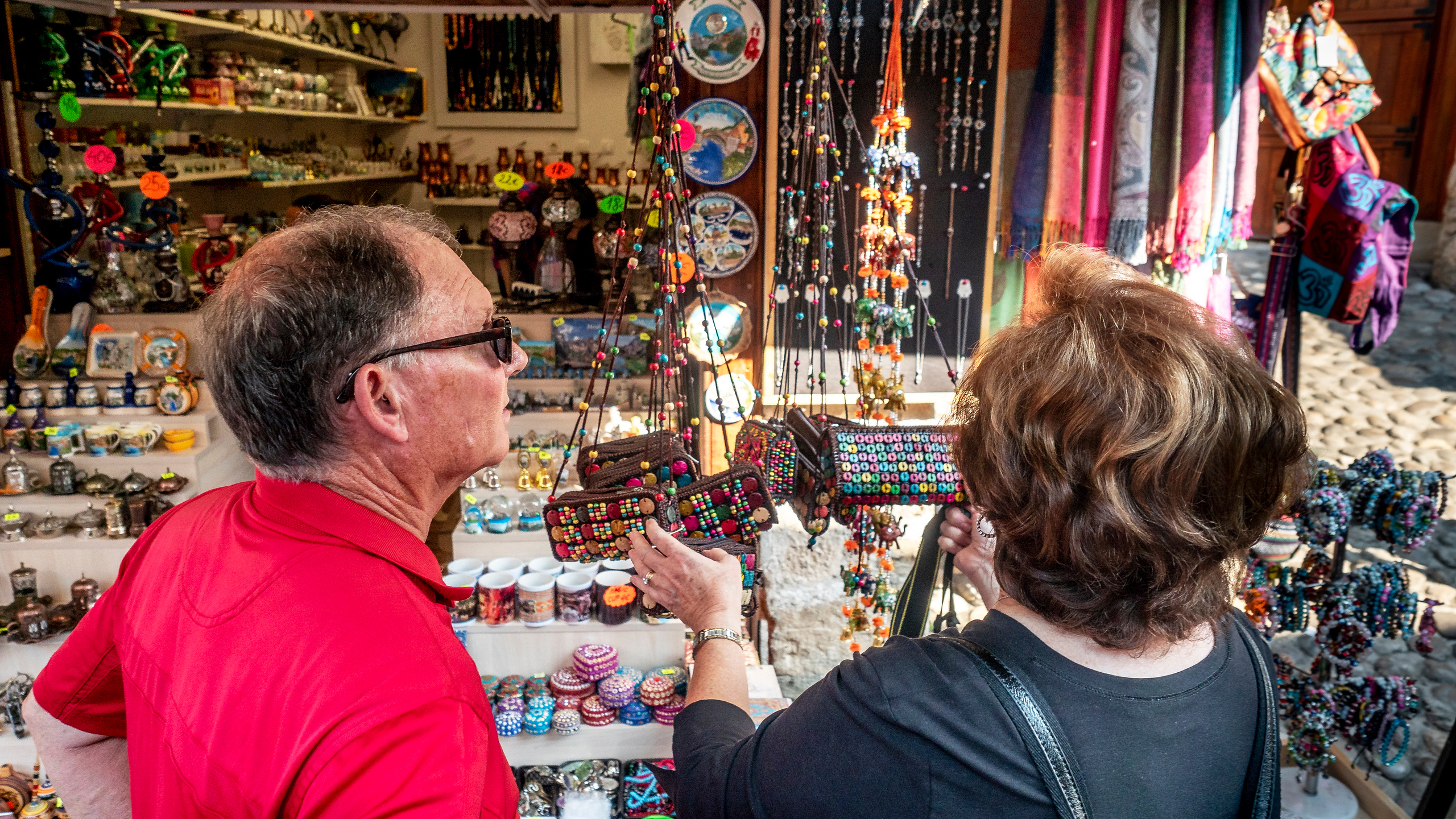 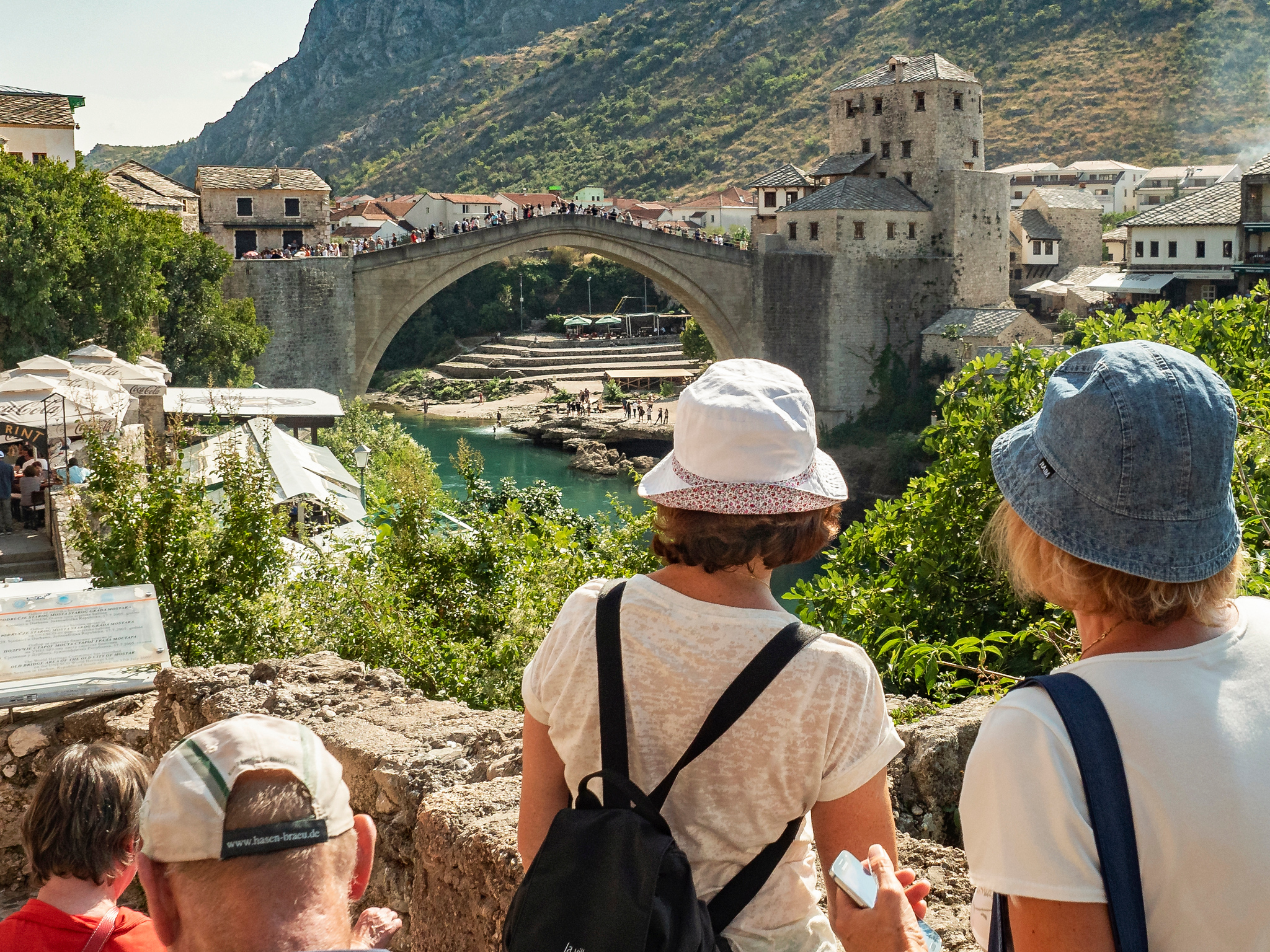 Walking through Mostar’s charming Old Town, you’d never know that Mostar endured more bombings than any other Bosnian city during the siege of 1993 (when the bridge was destroyed). Plenty of quaint restaurants and cafes and plenty of souvenirs for sale. 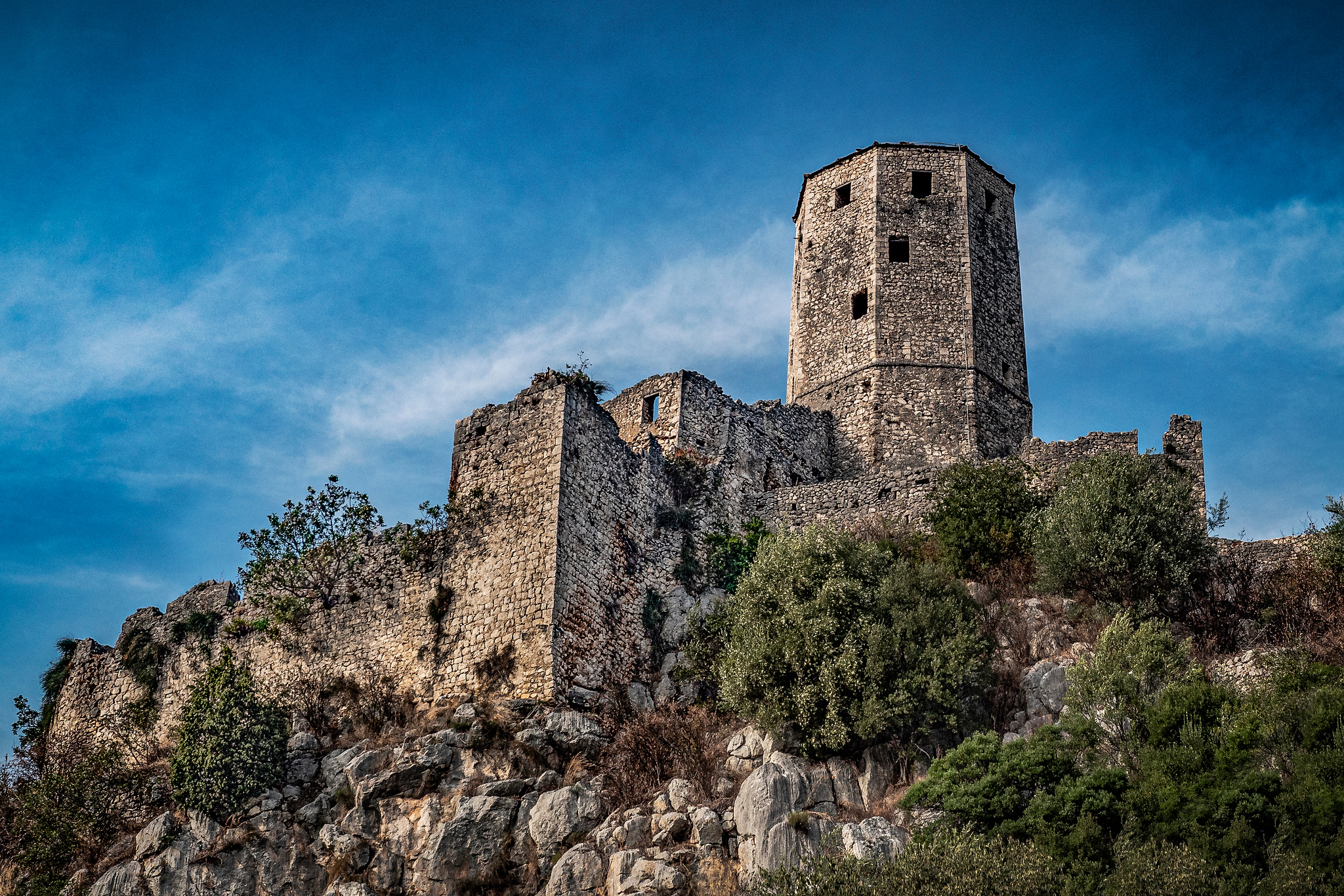 After Mostar, our next stop was Počitelj, a village in the Čapljina municipality in Bosnia and Herzegovina. There, you’ll find the fort of Počitelj, a silo-shaped fort overlooking the village from the top of the hill. It was built between the fifteenth and eighteenth centuries and used to house watchmen and military as a guard against possible intrusions from the Neretva valley. 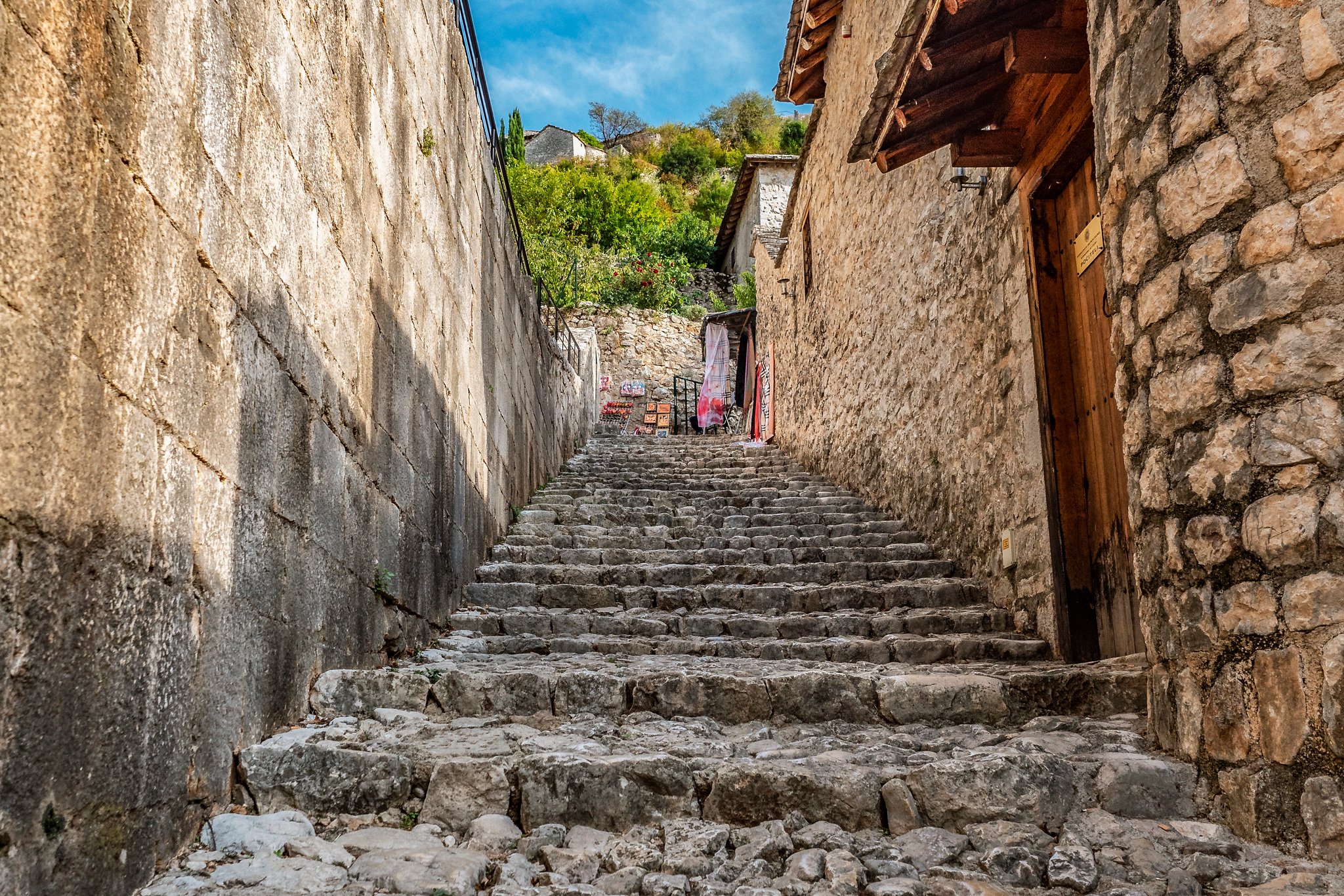 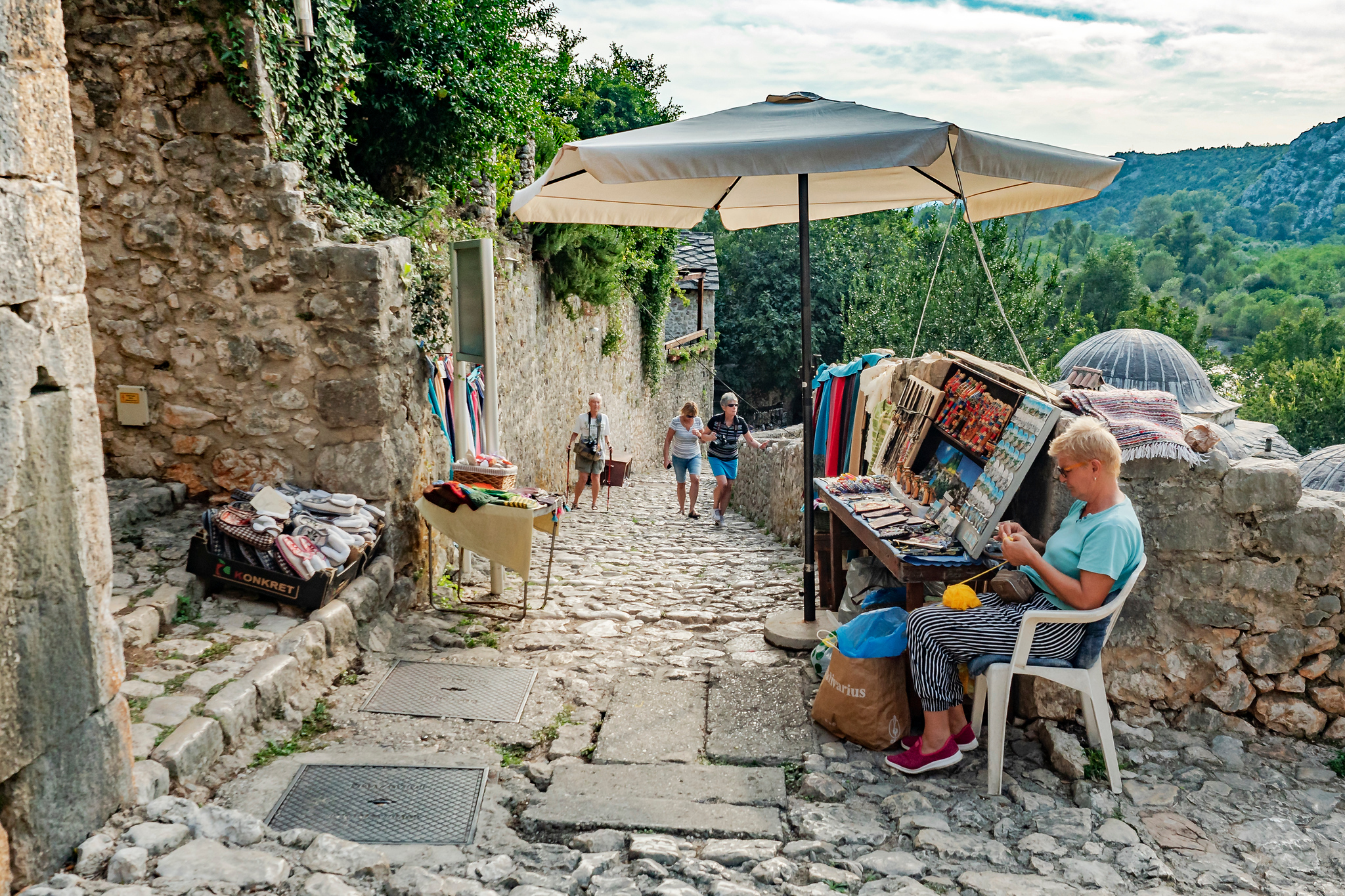 The earliest mention of or recorded reference to Počitelj is in charters of king Alfonso V and Fridrich III from 1444 to 1448. However, the village most likely predates these documents. The exact date can’t be pinpointed but it is likely that the fortified town along with its settlements was built by Bosnian king Tvrtko I sometime in 1383.

Počitelj is home to the The Hajji Alija mosque, which was was built in 1563 by one “Hajji-Alija, son of Musa”; as recorded on the inscription above the entrance door. The mosque was bombed in 1993 leaving the dome and minaret demolished and the rest of the building badly damaged. It was, however, rebuilt to its original form. 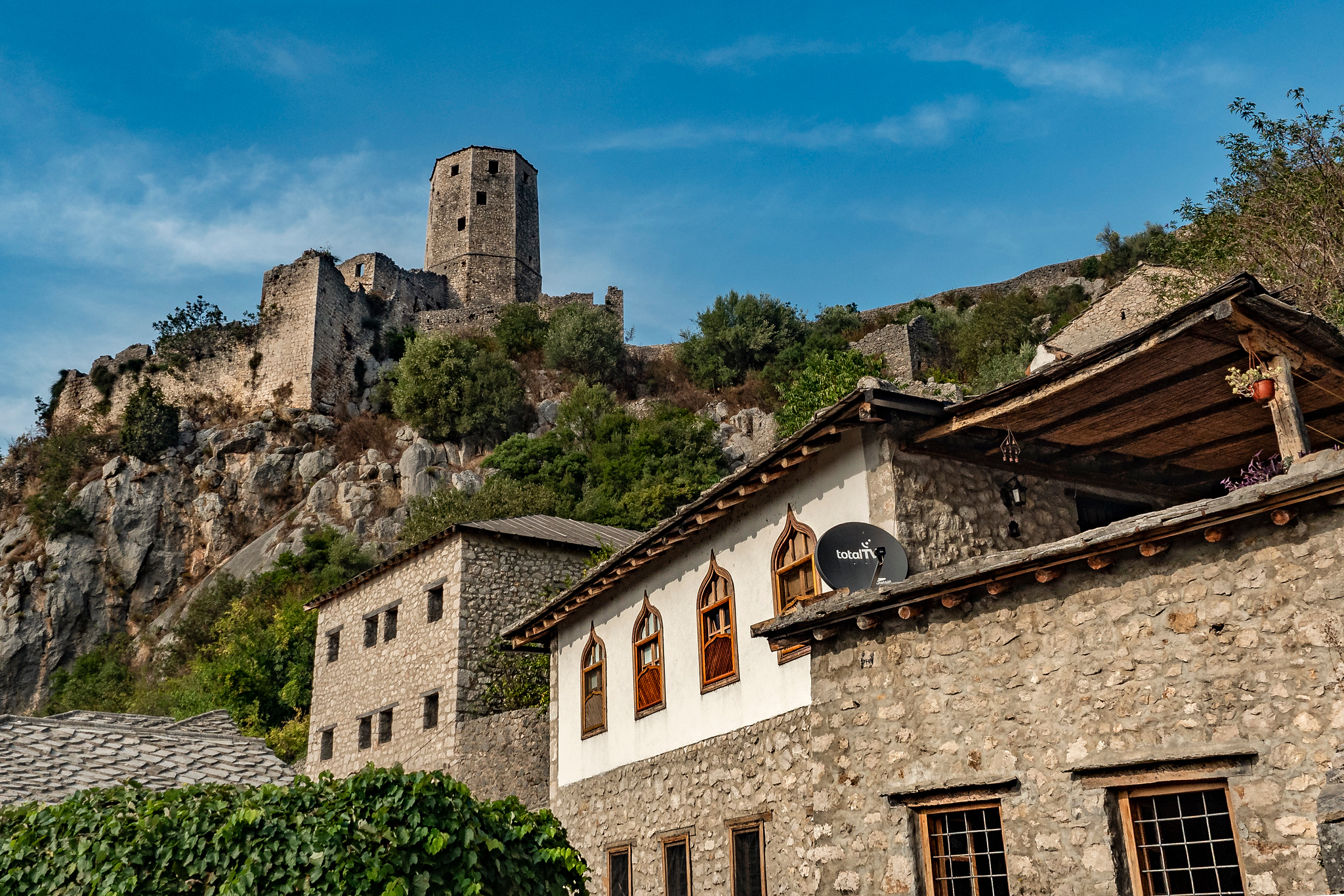 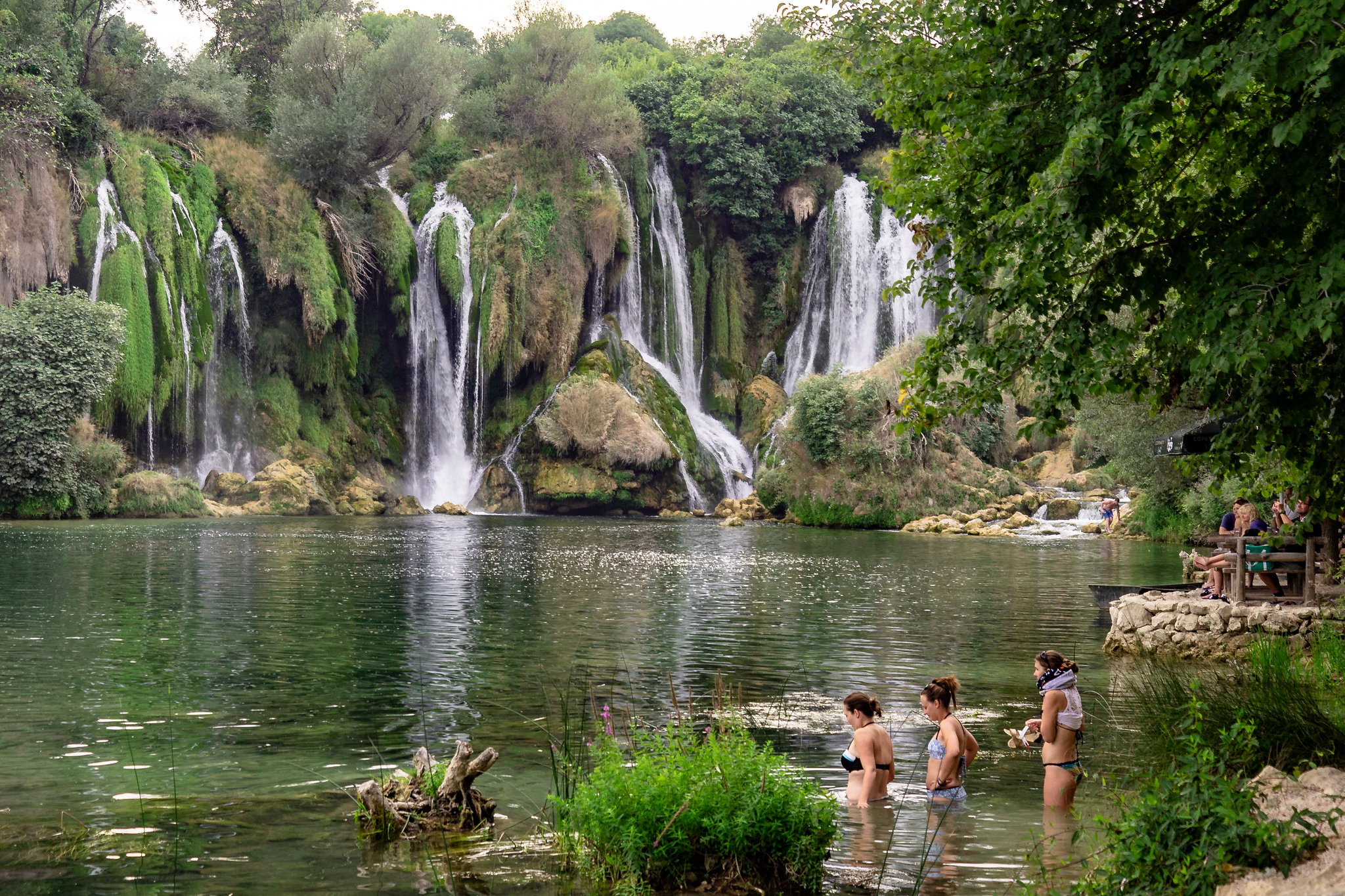 After Pocitelj, we visited the beautiful Kravice waterfall (whose official name is really Kravica), a large tufa cascade on the Trebižat River in the heartland of Herzegovina. Its height is about 80 feet and the radius of the lake in the base of the waterfall is 390 feet. It’s about a 15 minute walk down to the waterfalls from the parking area (trolleys are available – I recommend taking one back up the rather steep climb to the parking area). Photographs are good but you can check out an even better video HERE

By nightfall, we arrived at Blagaj Tekija, a Dervish monastery outside Mostar, Bosnia, that’s nearly 600 years old. Situated at the base of a cliff, next to the source of the river Buna, the Tekija (or Tekke) was first founded during the height of the Ottoman empire. .

We started the following day on a ski lift in Bjelašnica, a mountain in central Bosnia and Herzegovina. During the 1984 Winter Olympics, Bjelašnica hosted the men’s alpine skiing events, where USA’s brash Bill Johnson won the downhill after boldly predicting victory, overtaking Swiss ski legend Peter Müller who took silver. Our next stop was Umoljani, a village in Bosnia and Herzegovina which, according to preliminary results of the Bosnian census of 2013, is populated by only 43 inhabitants. On the territory of the village of Dolovi, the Umoljani necropolis houses 53 stećci (medieval tombstones known for their unique decorative symbols and carvings). Although different theories exist on their origins, they are often linked to the heretic Bosnian church and date from the 12th to 16th centuries CE. The necropolis was named a World Heritage of UNESCO in 2016. The sights here were simply breathtaking…

We then stopped in a small family-run restaurant/B&B called Pansion Umoljani located on the slopes of Bjelašnica. There we ate Burek, a popular meat-filled pastry made of a thin flaky dough known as phyllo. It might look a bit charred on top but this may have been the best thing I ate during our time in Bosnia and Herzegovina. Delicious. 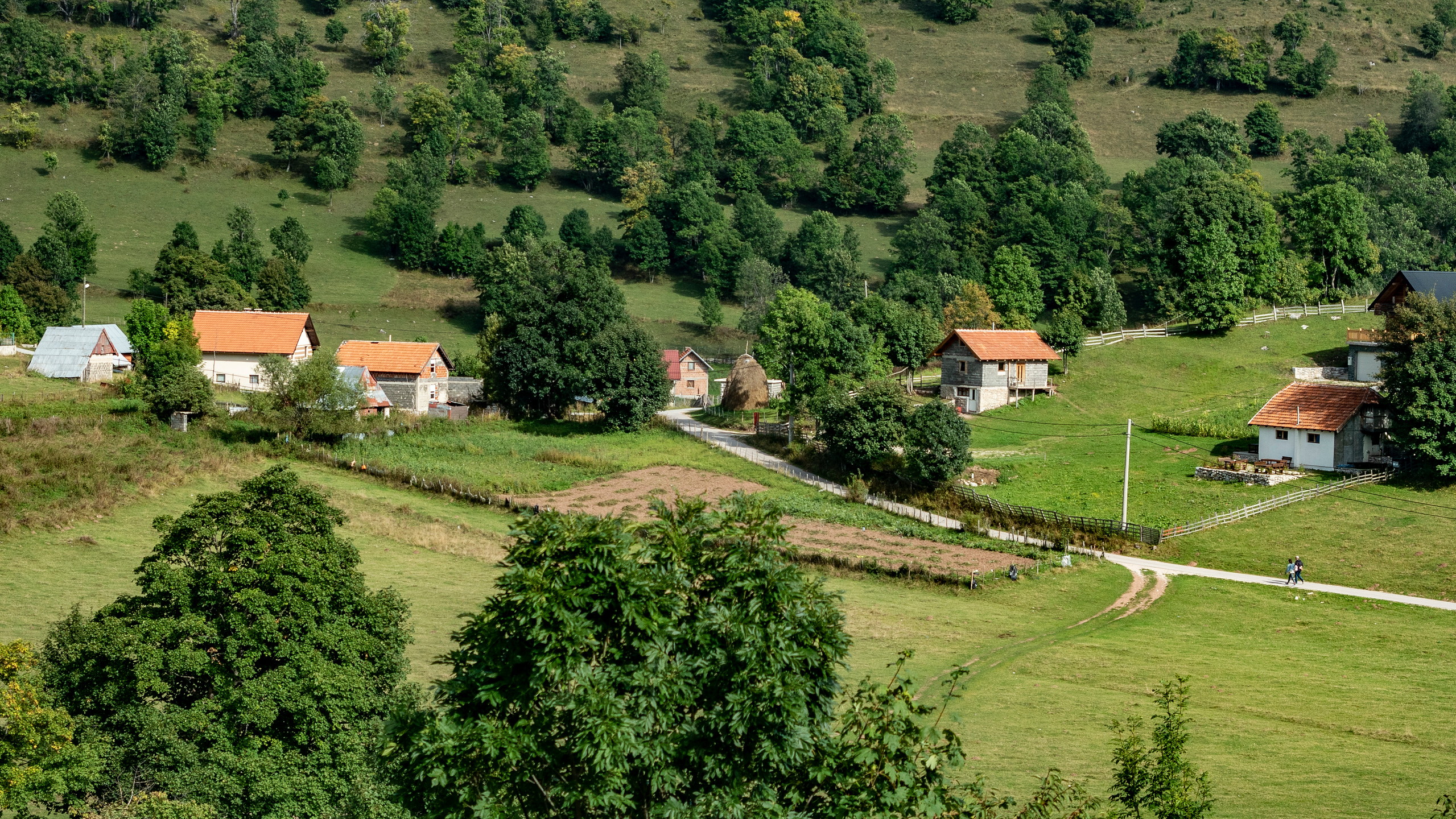 Lovely view from the outdoor dining terrace as we prepared to return to our hotel in Sarajevo.

How did we get around? Our awesome (and English-speaking) tour guide Ahmed Lavić from toursbylocals.com. He handled all the driving and got us to all the destinations we requested – highly recommended. And of course, there’s the lovely city of Sarajevo, the country’s capital city.

{Check out my FULL GALLERY of Sarajevo HERE}

Written By DanPerezPhotography On October 10, 2016