So, my daughter and I took a little “father/daughter” trip to Guatemala (a territory of Central America that once formed the core of the Maya civilization) last month to check out that country’s version of Día de Los Muertos (Day of the Dead). We first visited the historic city of Antigua (photographs HERE) and then attended the spectacular Giant Kite Festival (Festival de Barriletes Gigantes) in Sumpango (check out the amazing video shot and edited by my alter ego Dan Perez Films HERE).

Sumpango is a town in the Guatemalan department of Sacatepéquez (Guatemala is divided into 22 departments which are in turn divided into 340 municipalities) and is about a 30 minute ride north of Antigua. It has over 35,000 inhabitants, 80-90 percent of whom are Indigenous and whose native language is Kaqchikel. The Kaqchikel language is a member of the Quichean-Mamean branch of Mayan languages and is closely related to K’iche’ (Quiché) and Tz’utujil. Despite Guatemala being among Latin America’s smallest countries, it has one of its largest indigenous populations: anywhere from 40-60 percent according to official and informal sources.

What made Sumpango unique (for us tourists, at least) was the brightly colored traditional Mayan clothing (traje típico) of that region. Mayan women traditionally wear a combination of a skillfully woven, multicolored blouse called a huipil, a woven wraparound skirt that reaches to the ankles, and is held together by faja (sash) at the waist. The huipil is a distinct work of art, woven or embroidered, that may take months to complete. Huipiles are created using a backstrap loom (you can watch a video I created here) which has been used by Mayan women for 1,200 years. 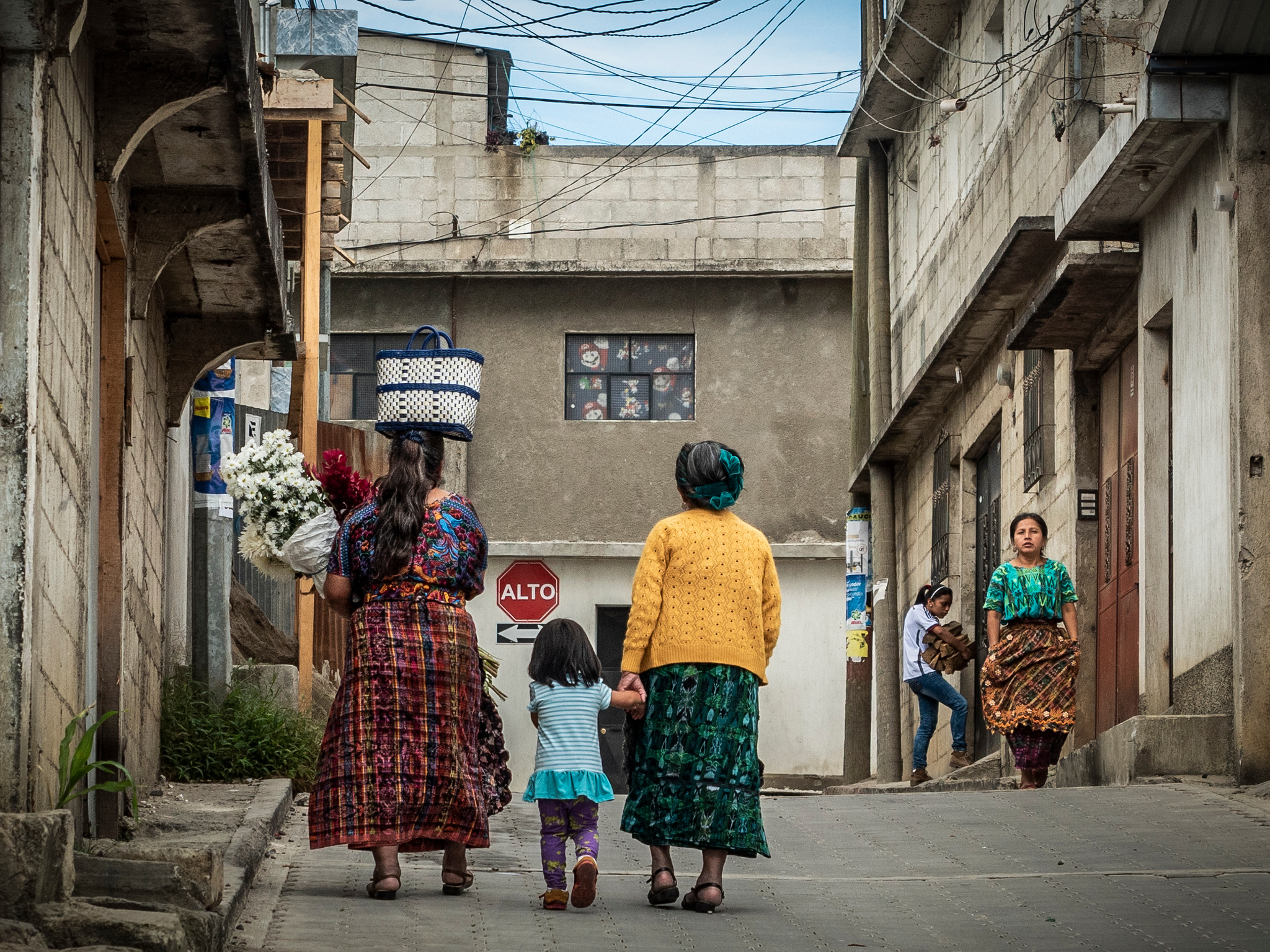 The traditional Mayan clothing (traje típico) of Guatemala is unique: each area of the country has different patterns, colours and dress, and this is celebrated as part of Guatemala’s unique heritage. The regional distinctions of the outfits actually began as a dress code implemented by Spanish colonial officials as a way to keep track of the different Mayan groups. They ordered the women in each town to create trajes that were all in the same design in order to determine who was with who.

Weaving is an artisan tradition in Guatemala. It is estimated that there are between 700,000 and 900,000 weavers in Guatemala, most of them indigenous women. Traje típico is one of the things that sets Guatemala apart, but woven into its history is the subjugation of the indigenous people (beginning with the Spanish conquest of Guatemala in the 1520s), and almost five hundred years of discrimination and violence.

During the Guatemalan Civil War from 1960-1996, indigenous Guatemalans were targeted in the brutal state-led repression. The ruling military junta viewed the highland Indians – descendants of the Mayas – as natural allies of the Marxist guerrillas fighting to overthrow it. There were massacres in many towns and villages, and Indigenous people accounted for more than 80 percent of the 200,000 people killed during the war and more than 100,000 women were victims of sexual abuse with many indigenous women forced into sexual slavery by the military. In those years of conflict, wearing traditional clothes came to be a dangerous act.

Being a woman in Guatemala is already a challenge. The small central American country has one of the highest rates of femicide in the world, with at least two women murdered every day. In addition to the physical, psychological and economic violence experienced by many Guatemalan women, indigenous women also face significantly higher rates of poverty, illiteracy and racial discrimination. Between 50 and 90 percent of indigenous women in rural areas cannot read or write and one in three have no access to healthcare or family planning services.

“Mayan culture is like the threads of our weavings,” said Carmelina Lix Socop, founding member of the local weavers’ council in Tecpan, Guatemala. “We cannot separate our language from our food, our spirituality from our weavings. They are all part of the same culture and our struggle to protect our identity.”

In the years since the country’s civil war, Guatemalan weavers (mostly women) have become protagonists of a movement for the survival and vindication of their culture, heritage and art despite a growing social pressure to abandon the use of Maya garments, as they are considered old-fashioned. Fewer and fewer women and girls use traditional clothing because these are becoming less appreciated and respected. Numerous Mayan women in Guatemala are also pushing for new legislation to recognize and protect their traditional designs and ‘collective intellectual property’ to challenge the appropriation of their art by companies and individuals around the world.

During our few days in Sumpango for Día de Muertos, my daughter and I a paid visit to the cemetery in Sumpango where every year family members come with flowers, paint, machetes and gardening tools (as well as food and drink) to clean and adorn the gravesites and mausoleums of their deceased loved ones in preparation for Día de Muertos.

The practice of celebrating the dead goes back thousands of years in Latin American cultures. In the Aztec culture the celebration of the dead was in August and went on for a month. Gradually, it was associated with October 31, November 1, and November 2 to coincide with the Western Christianity traditions of All Hallows’ Eve, All Saints’ Day, and All Souls’ Day. The multi-day holiday focuses on gatherings of family and friends to pray for and remember friends and family members who have died, and help support their spiritual journey.

It’s a less somber and more festive affair than one would think and as we spoke to several locals at the cemetery who were painting and decorating the final resting spots of their loved ones, we realized how much it meant to these folks to remember those who have passed. Most importantly, we were able to witness the remnants of a centuries-old indigenous culture still fighting to stay alive. It was a beautiful thing to witness. 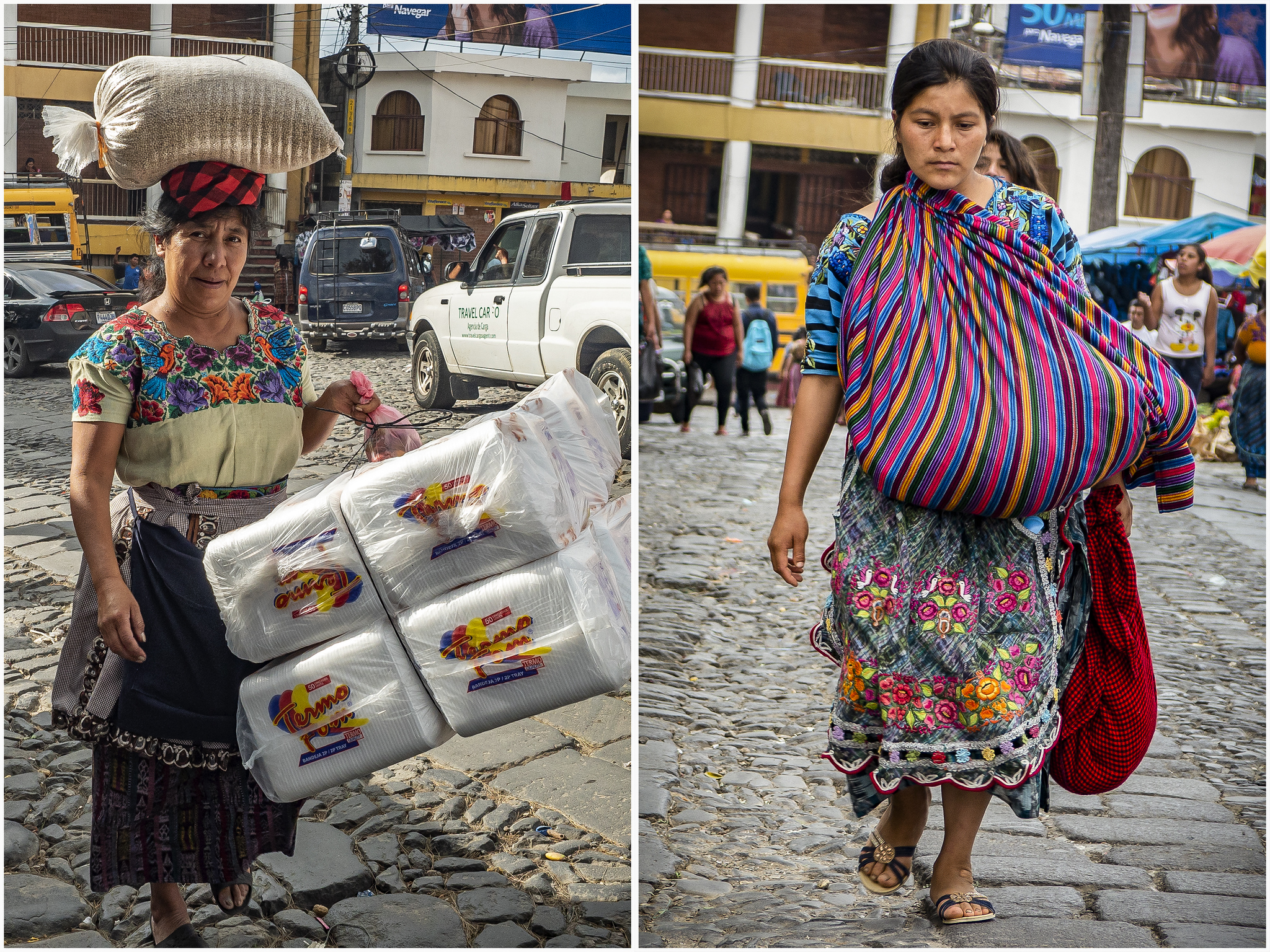 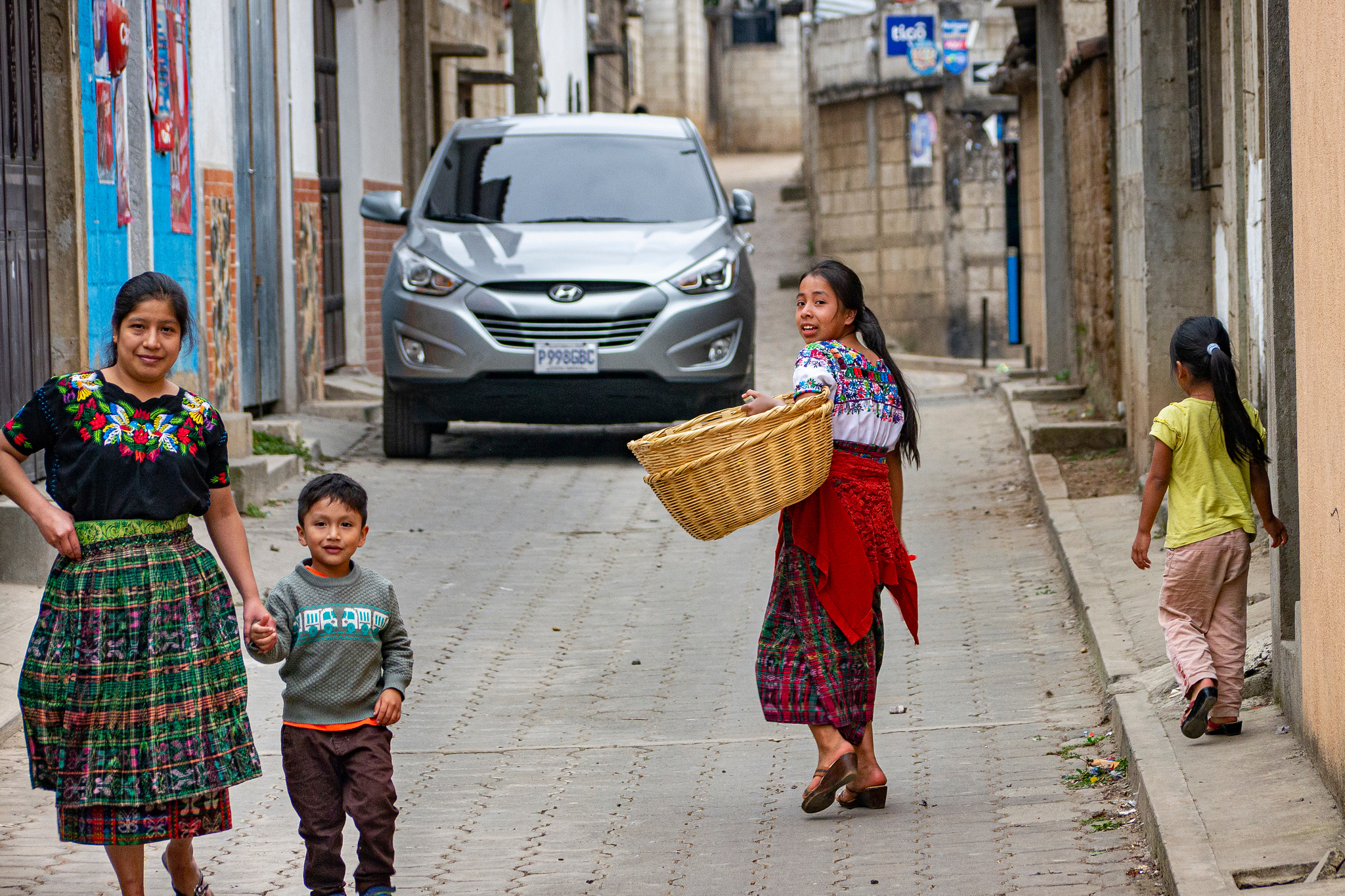 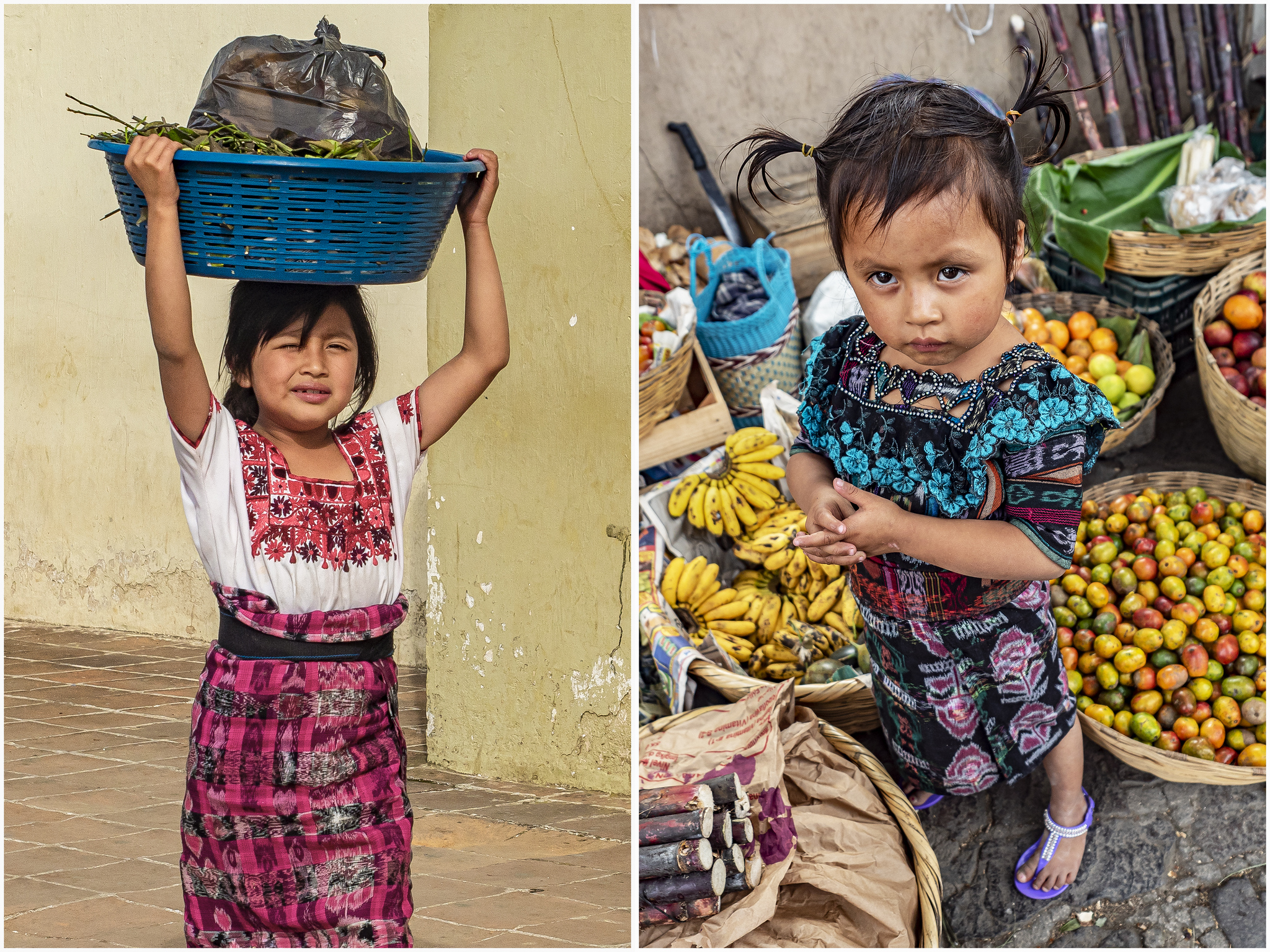 Images of the streets of Sumpango… 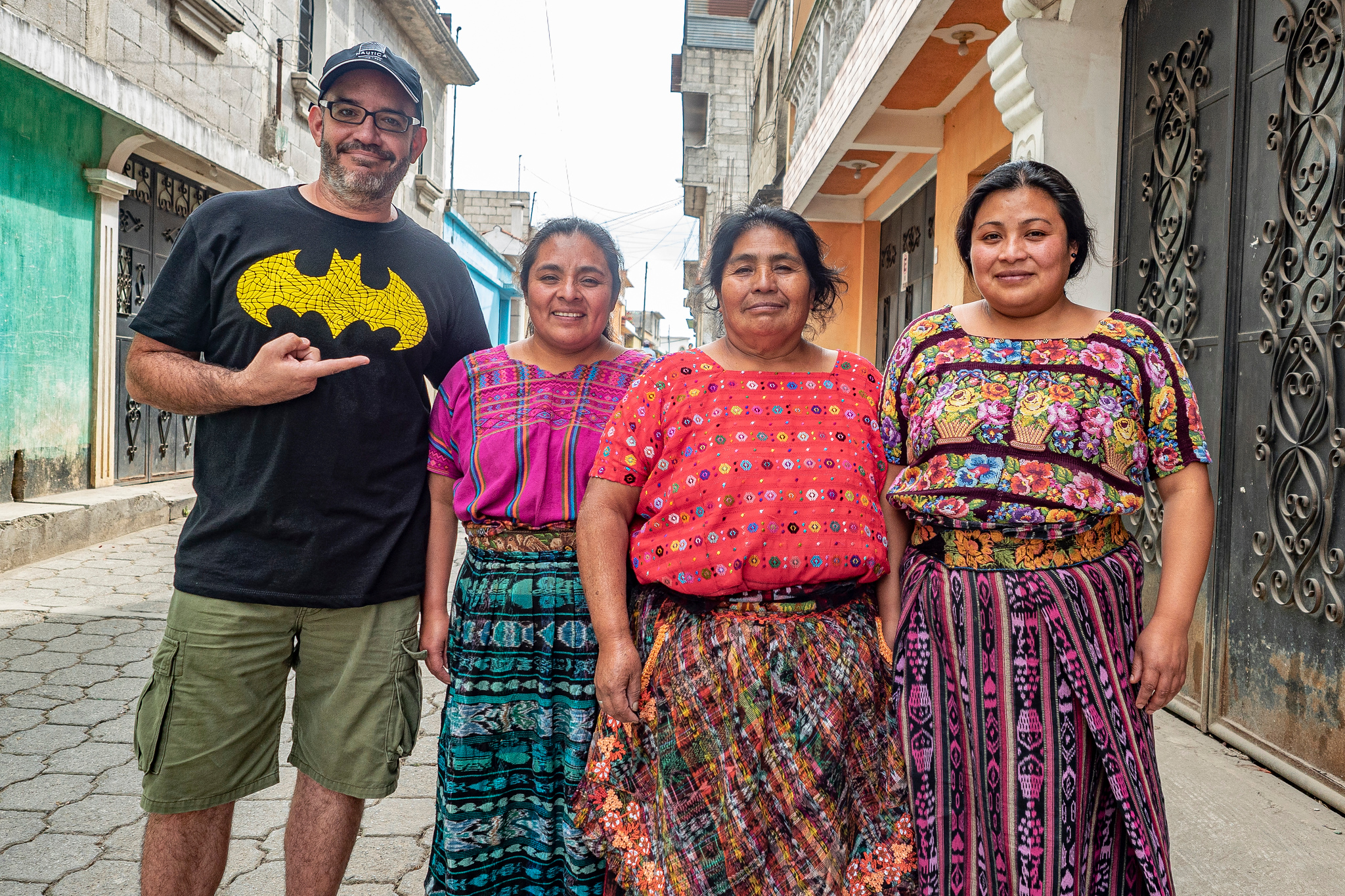 I managed to make a few friends while in Sumpango. Three tough women who tirelessly worked all day (I mean it – all day) preparing food for the Día de Muertos kite festival… 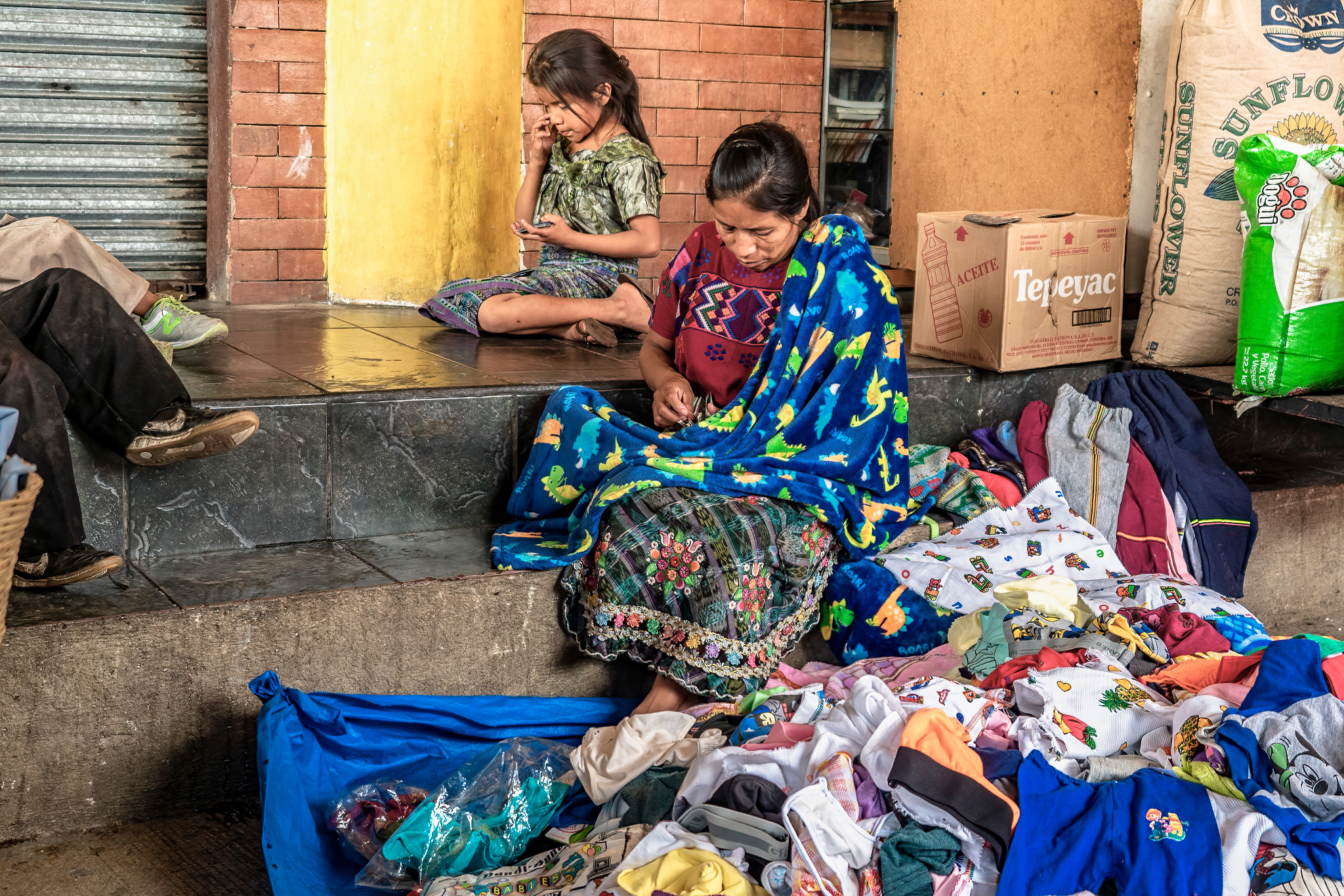 On the day before Día de Los Muertos, street vendors line the streets and folks pick out flowers outside the cemetery to spruce up the gravesites of their loved ones… 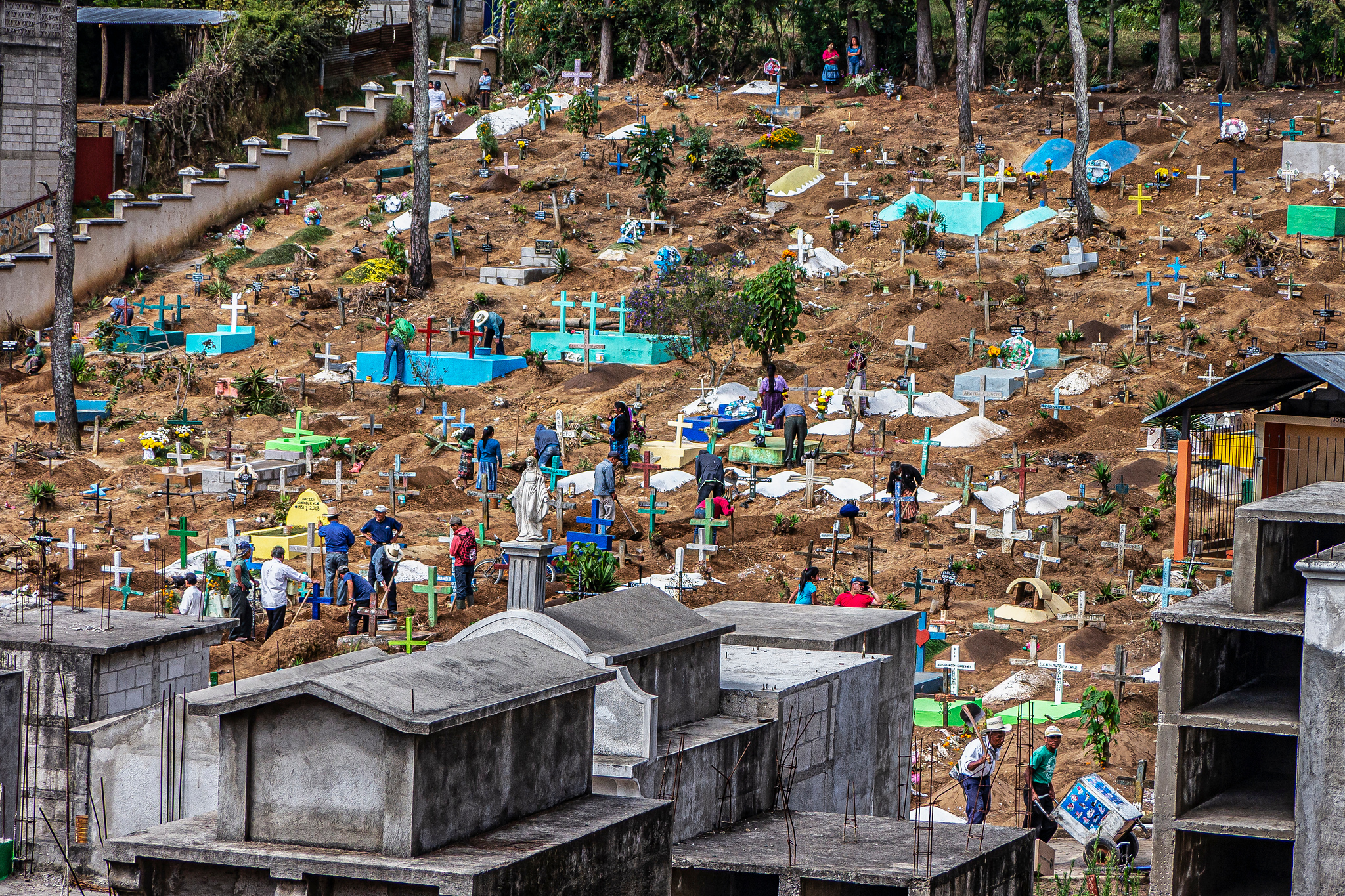 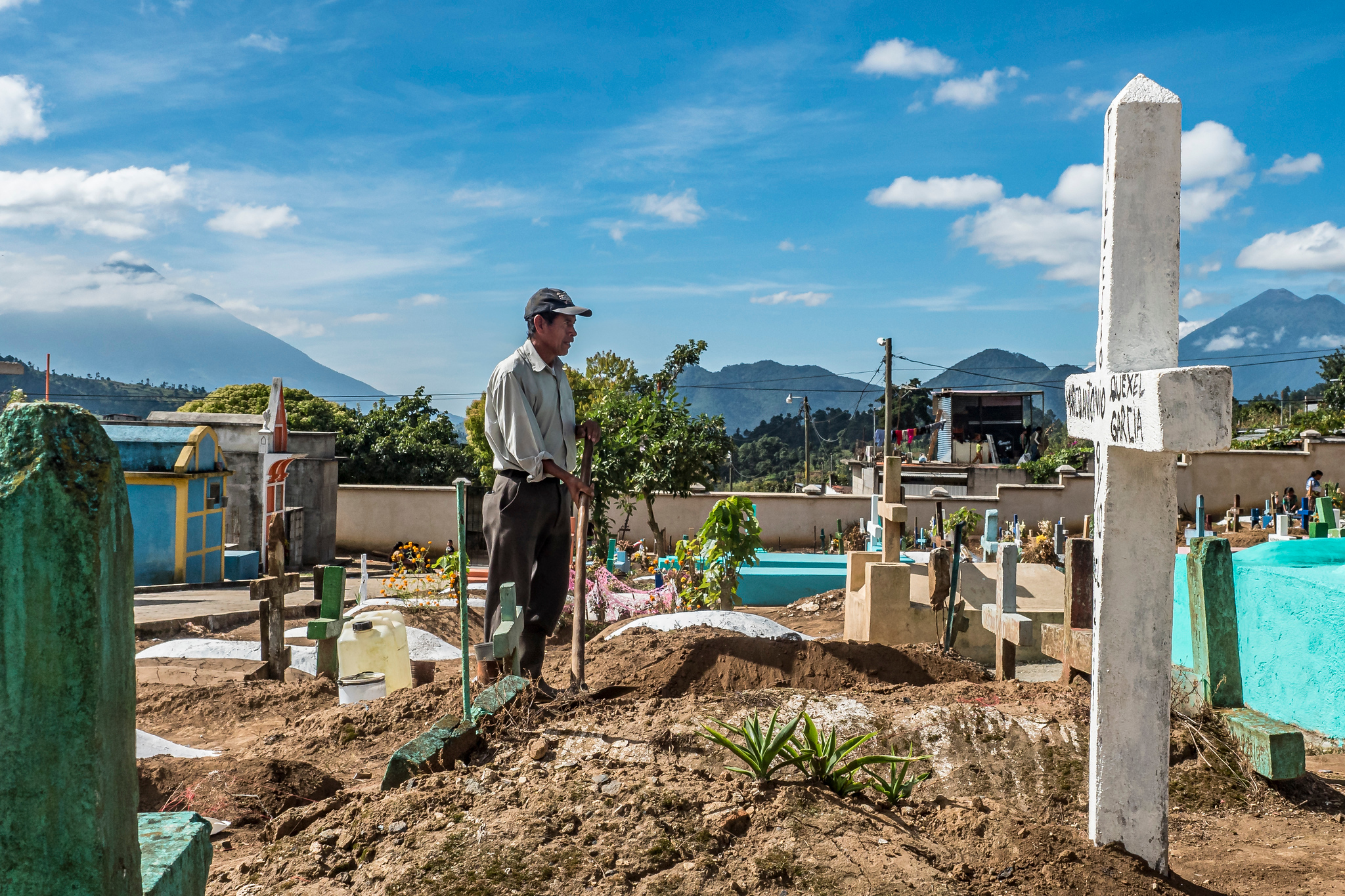 On the day before Día de Los Muertos, the locals begin arriving at the cemetery and getting to work… 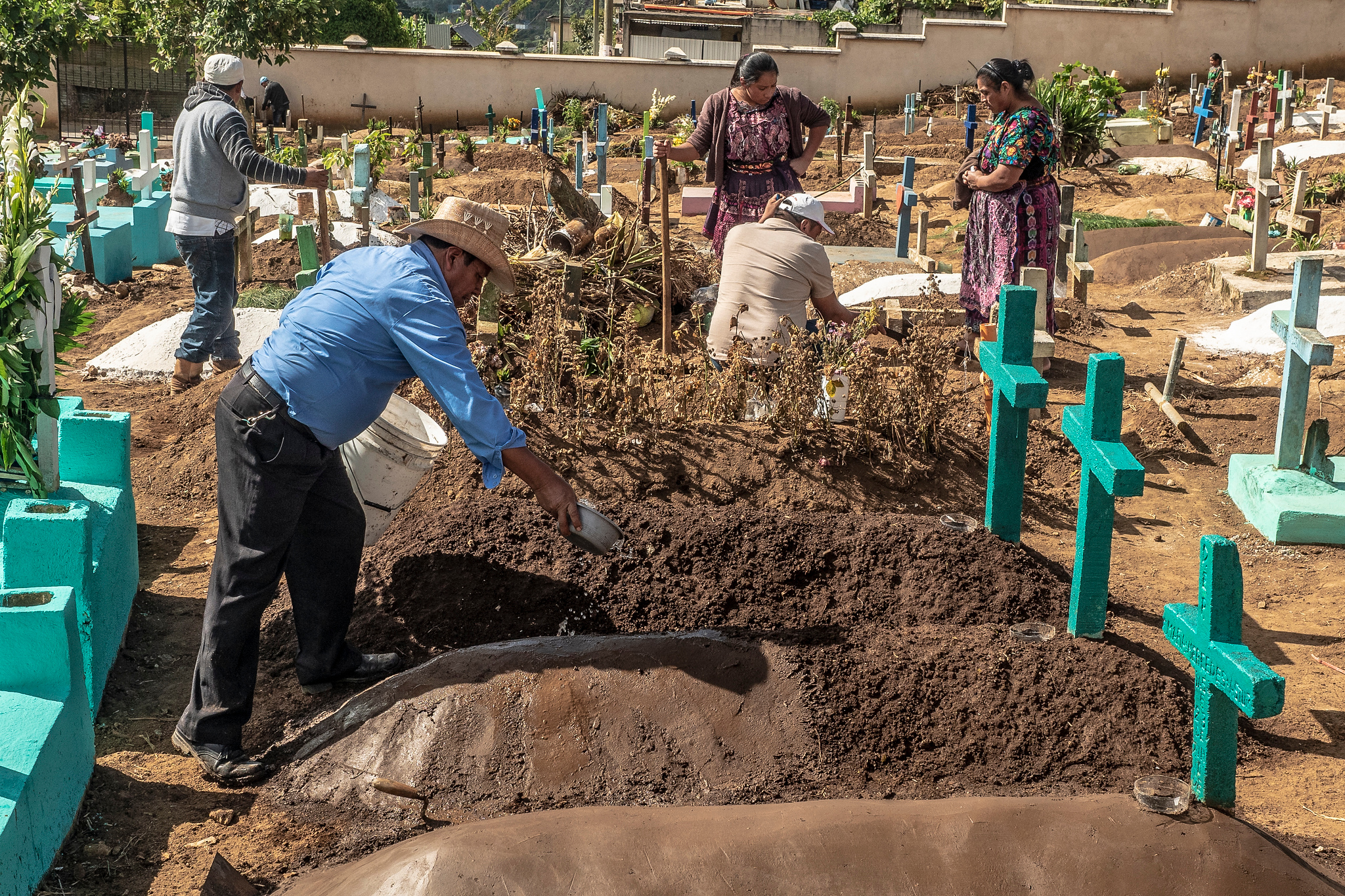 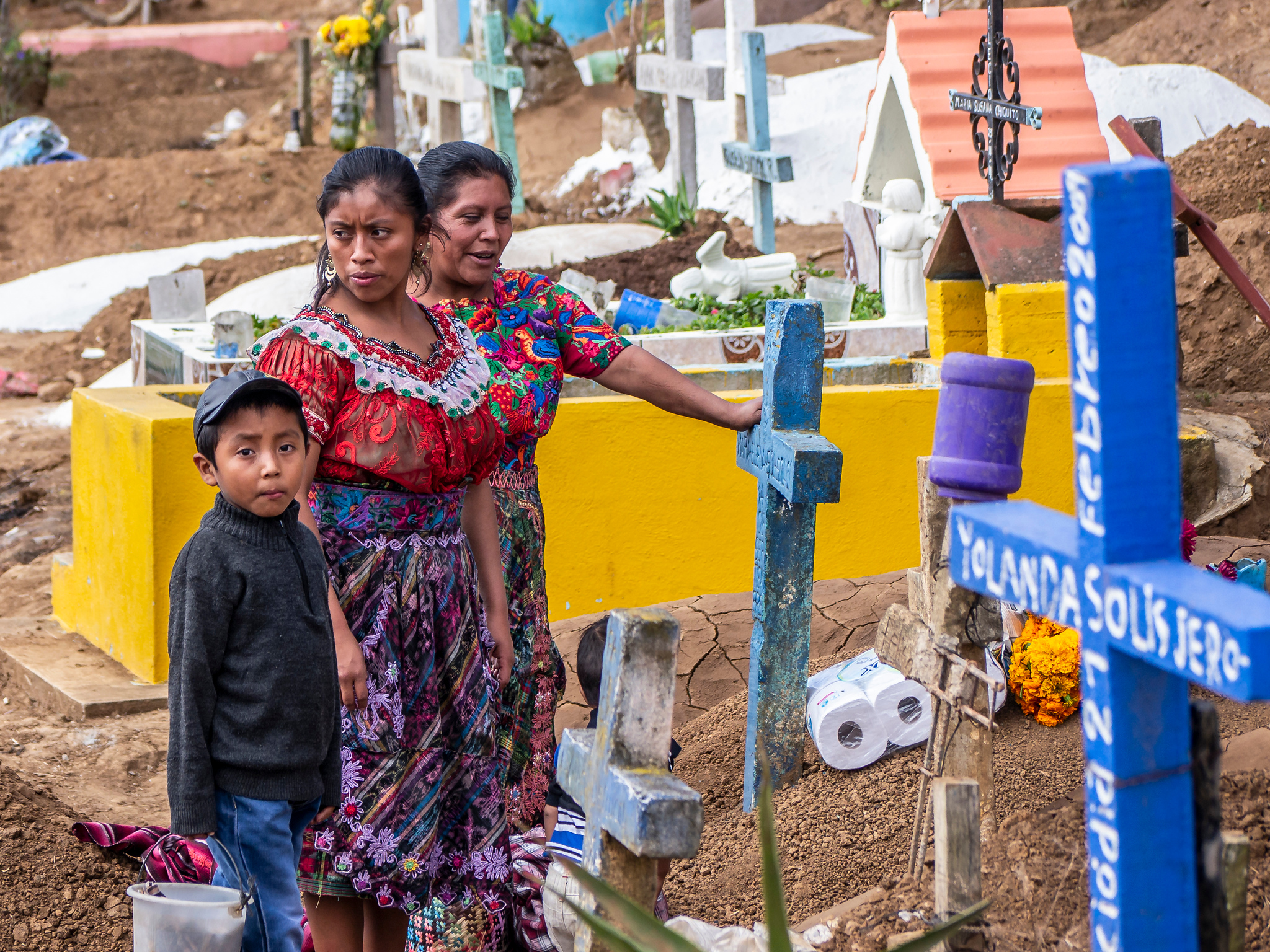 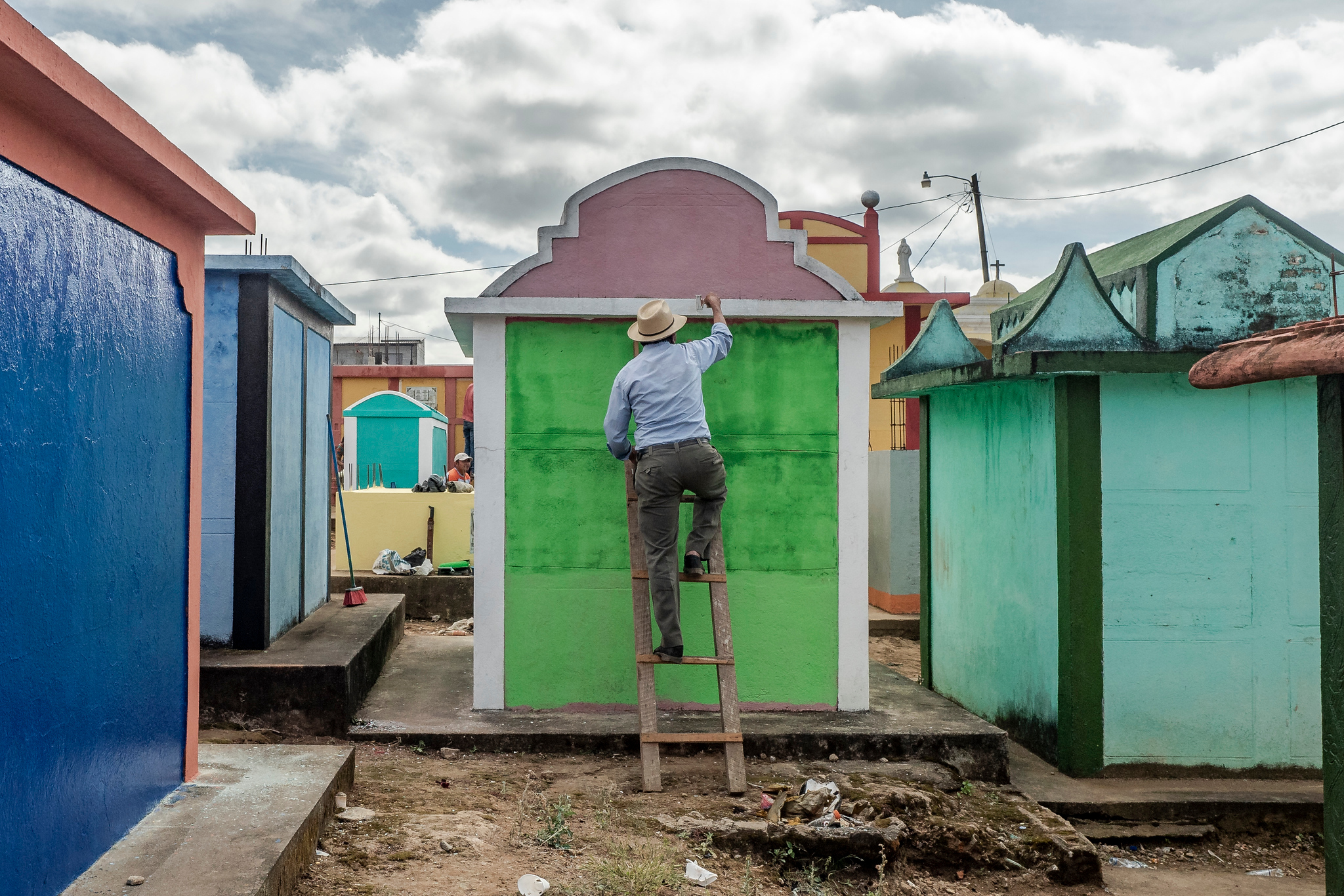 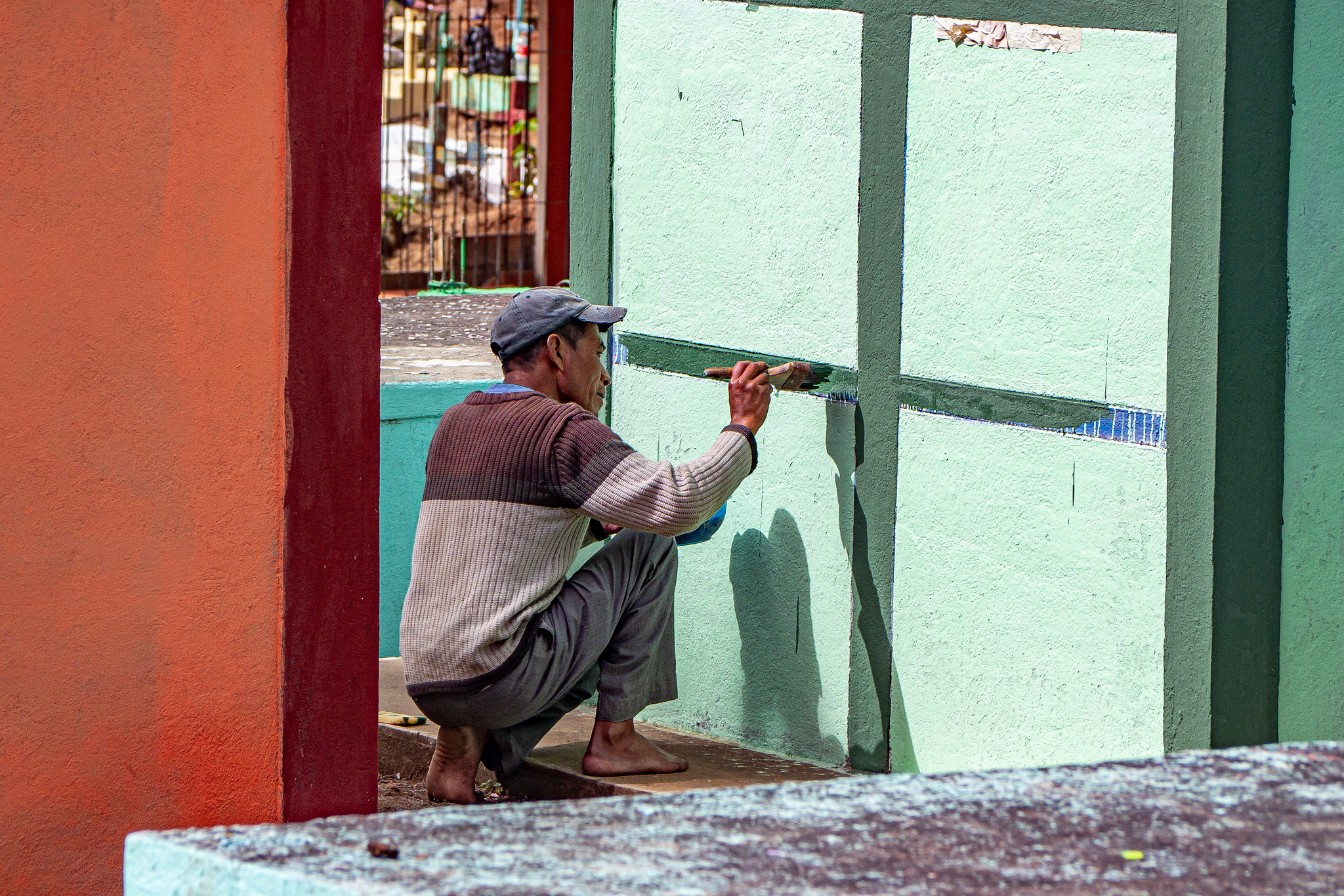 The Sumpango cemetery is a public cemetery and those not able to afford a mausoleum share the ground (sometimes mere feet apart) with other families. Throughout the day, families are already at work preparing the gravesites of their loved ones for the following day… 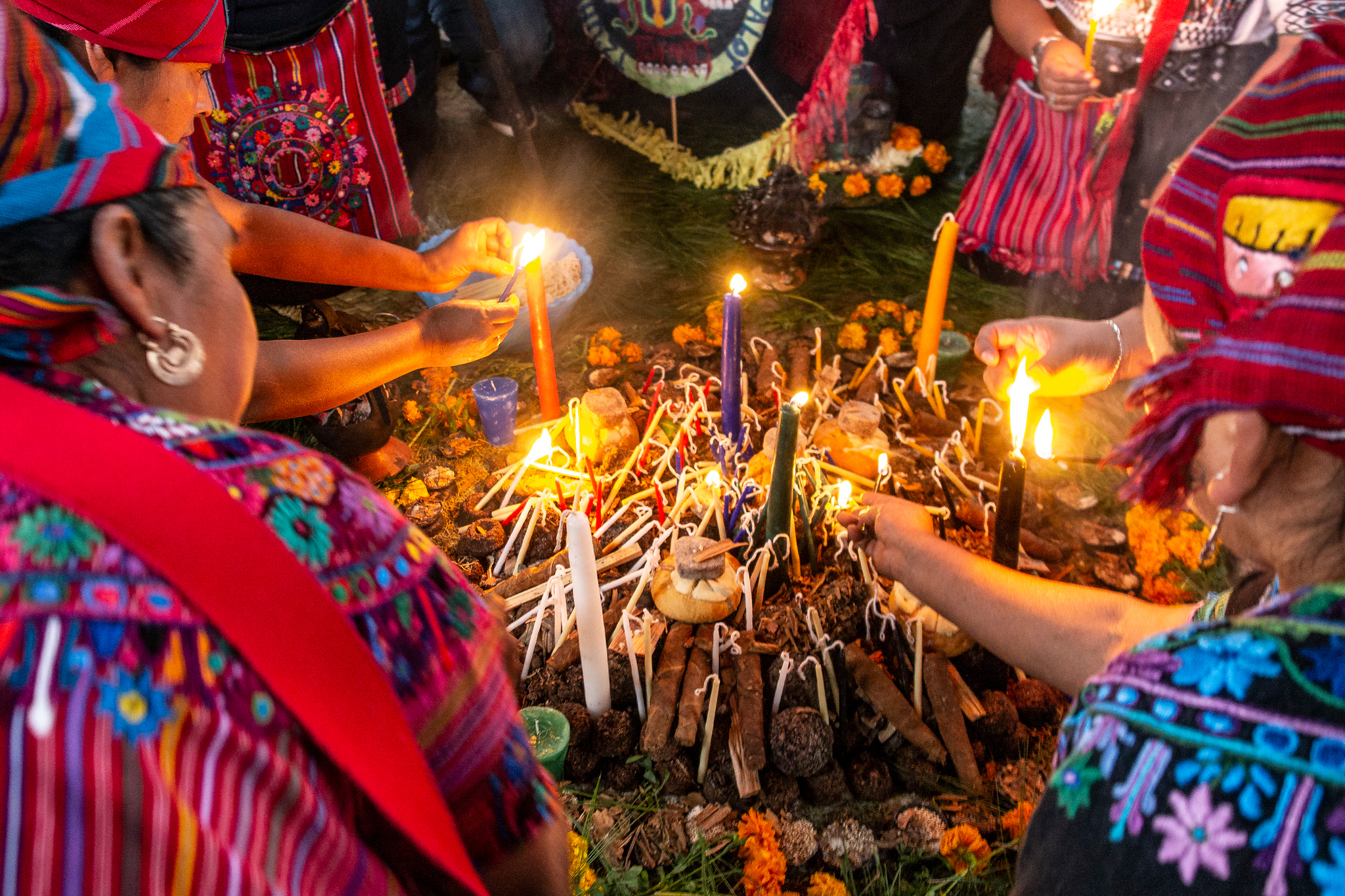 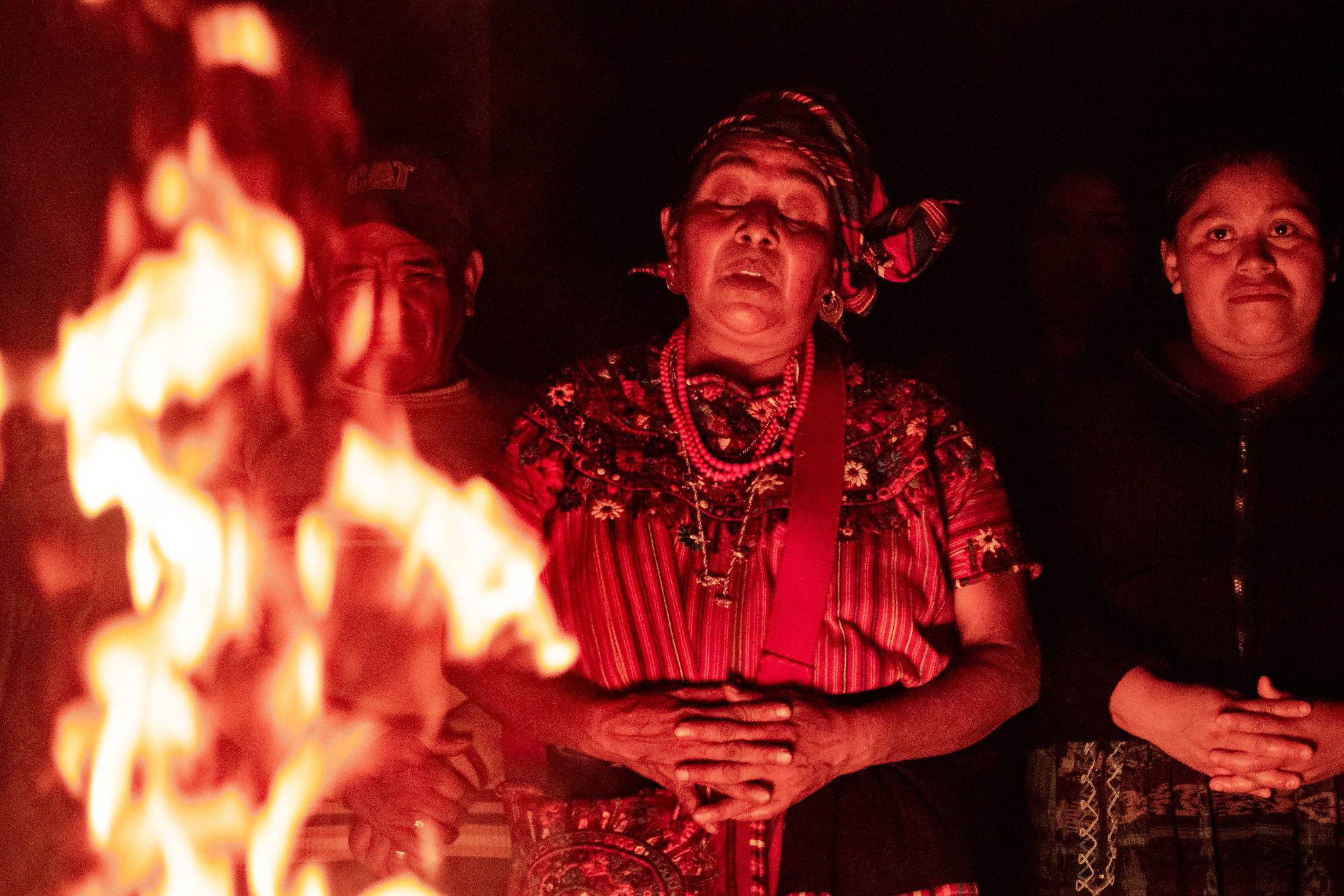 On the eve of the Day of the Dead, a Mayan shamanic ceremony takes place to communicate with the spirits and to bless the kites that will fly the following day (you can watch that video HERE) Come Day of the Dead, the cemetery is bustling with locals and awash in bright colors. 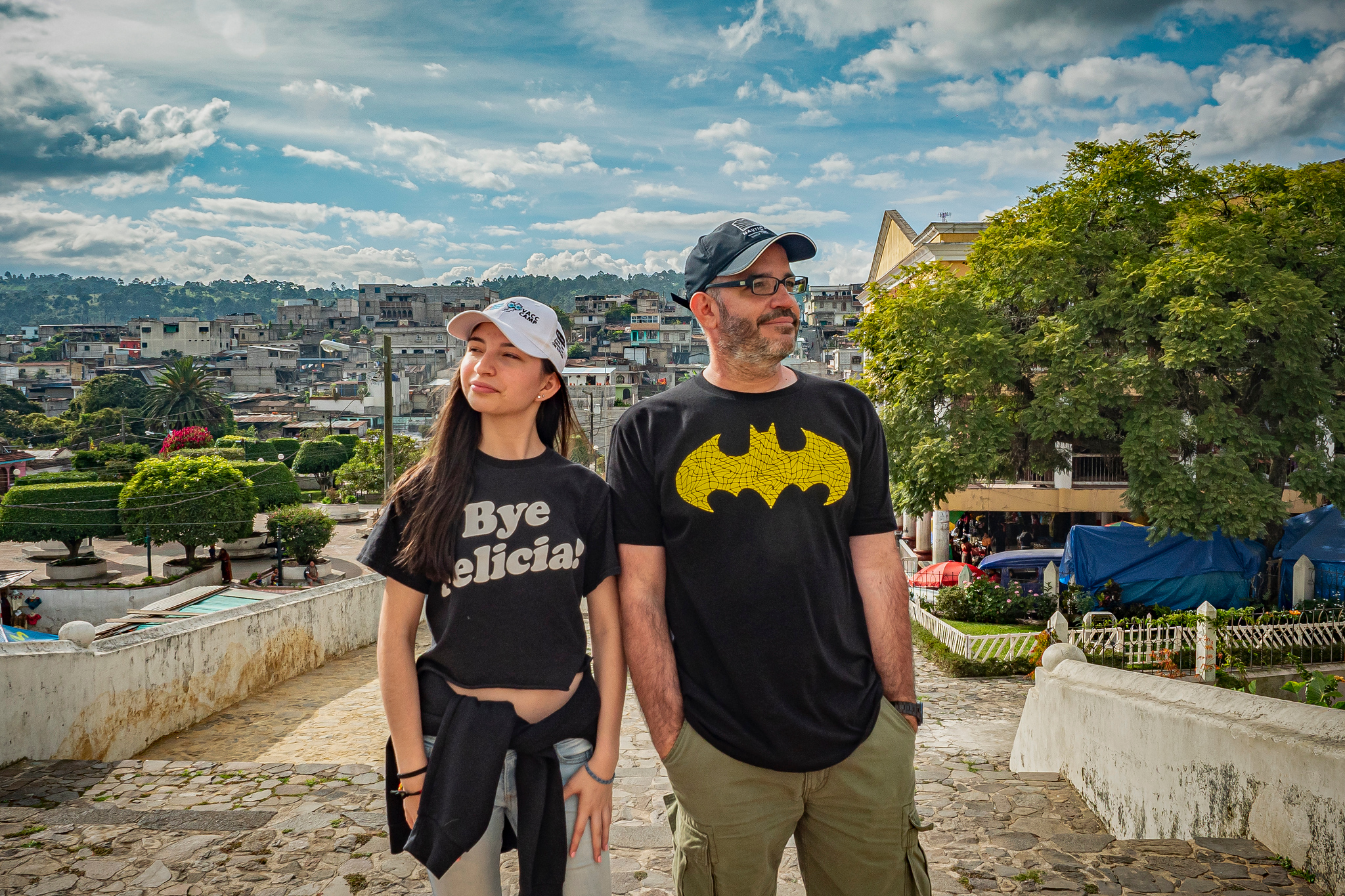 My daughter and I really enjoyed our time in Sumpango. Despite the decades of poverty and hardships the folks in this region have to endure, the people were warm and friendly everywhere we went. And as for the the many hard-working Guatemalan women of all ages we came across, their faces made one thing unreservedly clear – they will not be conquered.

Special thanks to Julio Roberto Asturias Chiquitó of the Asociación Barriletes Hijos del Viento Guatemala for facilitating our trip to Sumpango and for his great hospitality.

Read more about Guatemala’s Indigenous women and the many challenges they face in this PDF by Peace Brigades International. More information about the Indigenous Women’s Struggle Against Corporate Abuse In Guatemala can be found HERE. 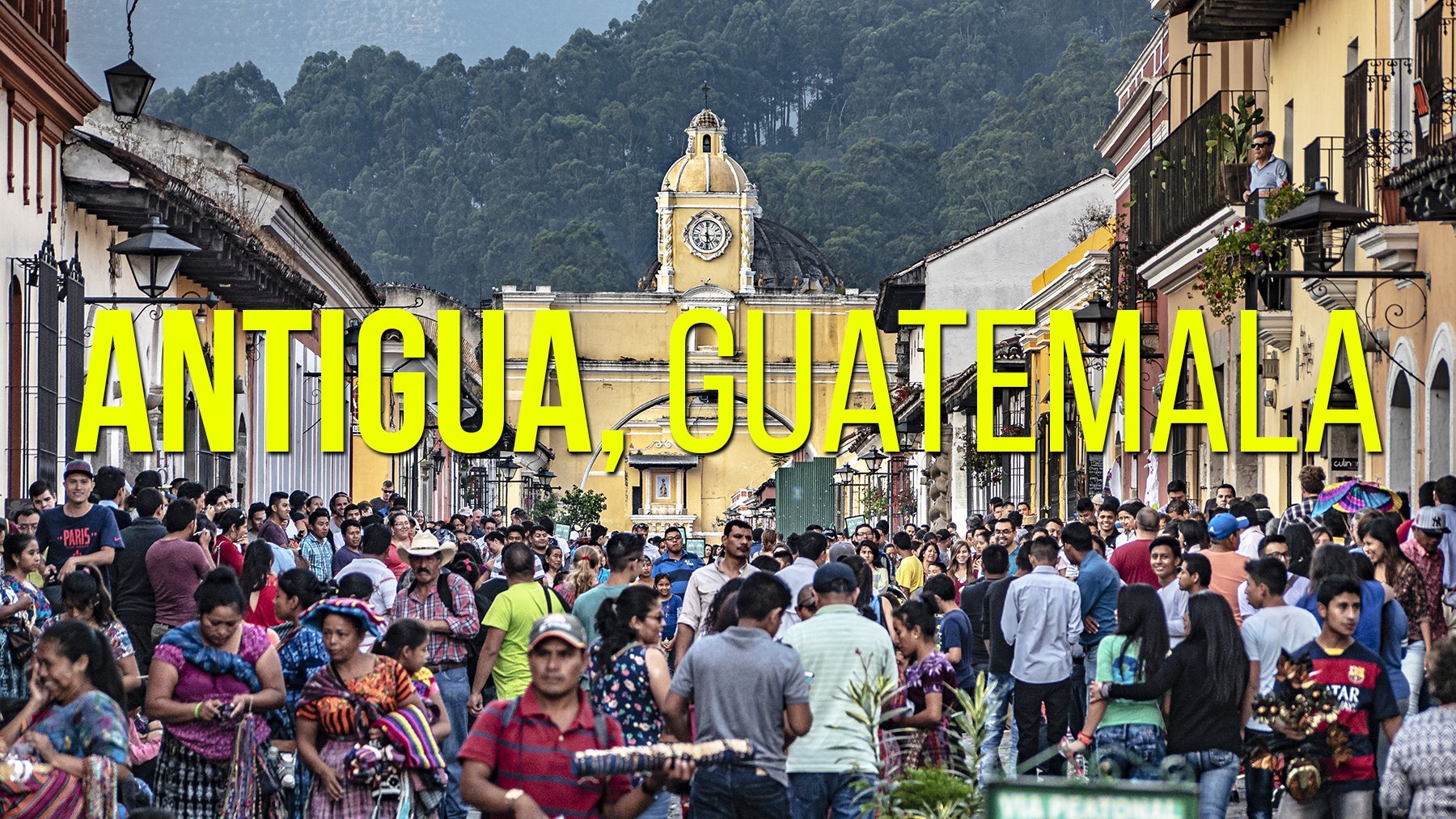 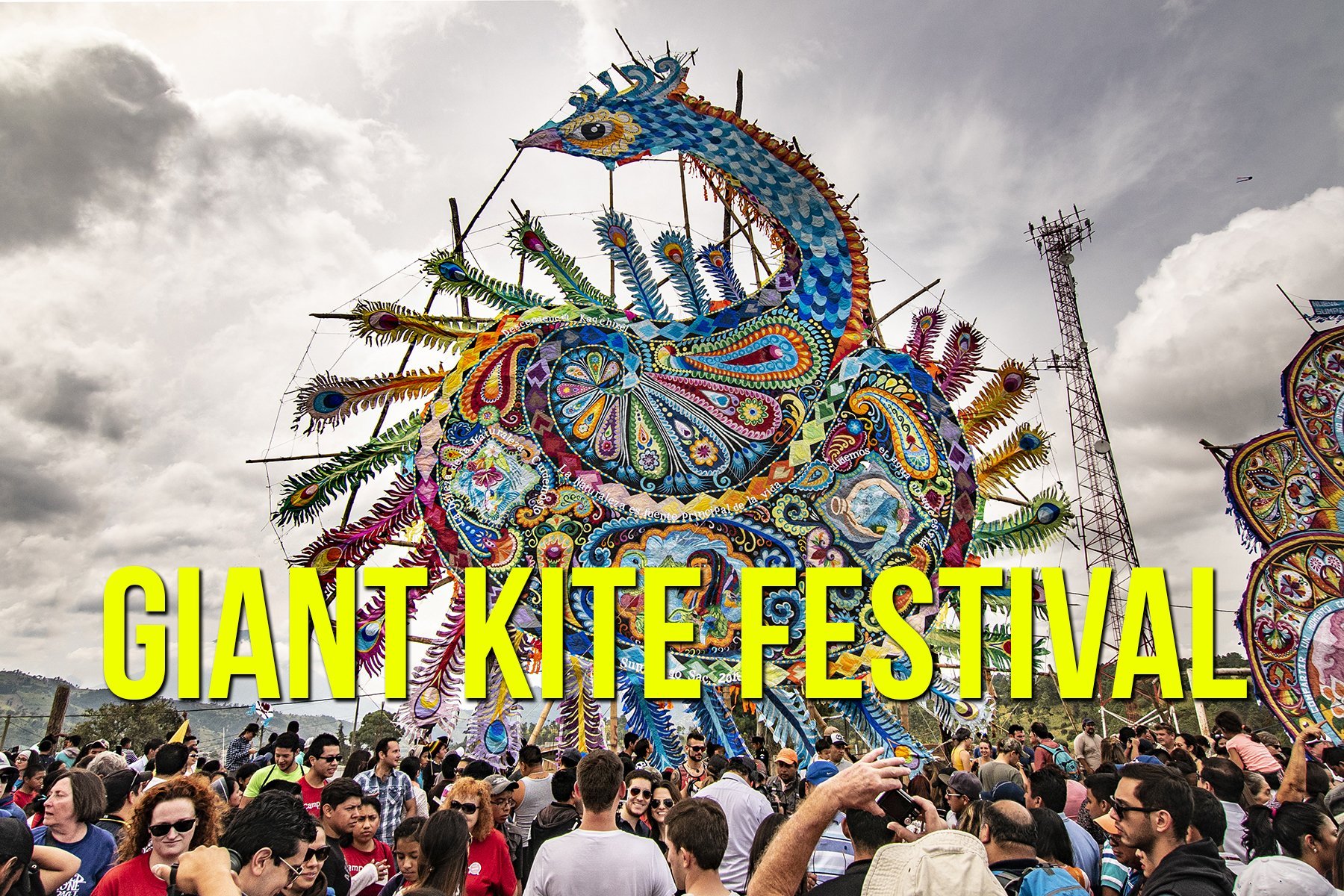 Written By DanPerezPhotography On November 17, 2016