April 18, 2016
SubscribeShareTweetShareShareShareSaveMail
#mc_embed_signup{background:#fff; clear:left; font:14px Helvetica,Arial,sans-serif; } /* Add your own Mailchimp form style overrides in your site stylesheet or in this style block. We recommend moving this block and the preceding CSS link to the HEAD of your HTML file. */

So last week, my wife and I traveled to the city of Cluj-Napoca, the second most populous city in Romania (after the national capital Bucharest) to attend the screening of one of my documentary films at the ClujShorts International Short Film Festival. The city, considered the unofficial capital to the historical province of Transylvania, is one of the most important academic, cultural, industrial and business centres in Romania and is home to the country’s largest university, Babeș-Bolyai University.

My experience at the film festival was one of the most enjoyable I’ve ever had (more on that HERE) and the time spent walking around this warm and colorful city (with Mrs. Perez and my Lumix GH4) was just as enjoyable. Despite mostly cloudy skies during our stay, Cluj-Napoca is an absolutely lovely city that makes you feel as if you’ve traveled back in time about a few hundred years. If you need further proof, allow me to present you with a few choice photographs of the colorful city of Cluj-Napoca. 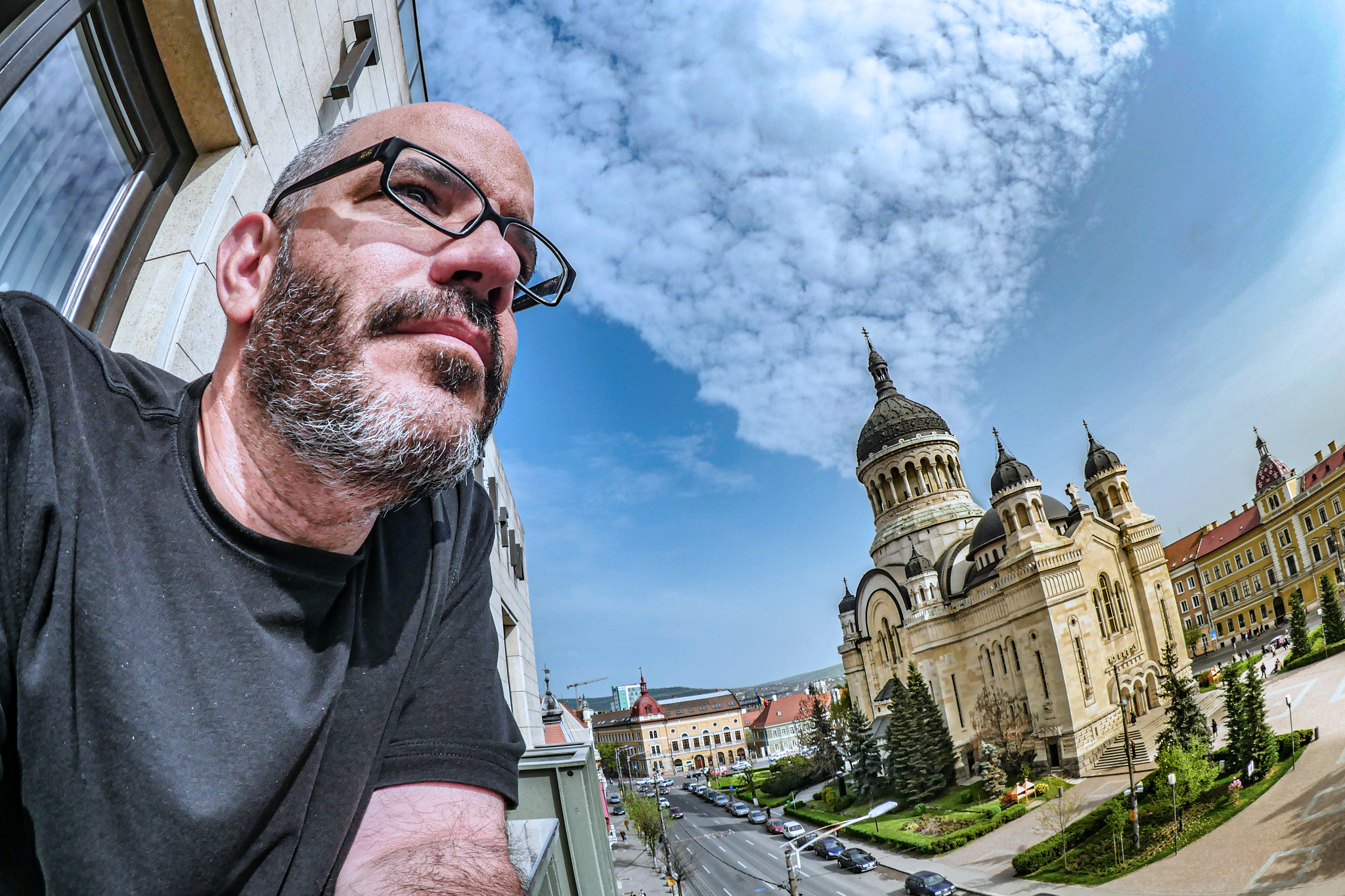 First of all, I’d be remiss if I didn’t mention the sweet view we had from the terrace of our room at the Hotel Beyfin. Located right in the heart of the city, it’s a lovely place to stay if you’re in town… The Dormition of the Theotokos Cathedral (Catedrala Adormirea Maicii Domnului) is the most famous Romanian Orthodox church of Cluj-Napoca. Built between 1923 and 1933, it lies on the Avram Iancu Square, together with the Cluj-Napoca National Theatre and the Avram Iancu Statue. 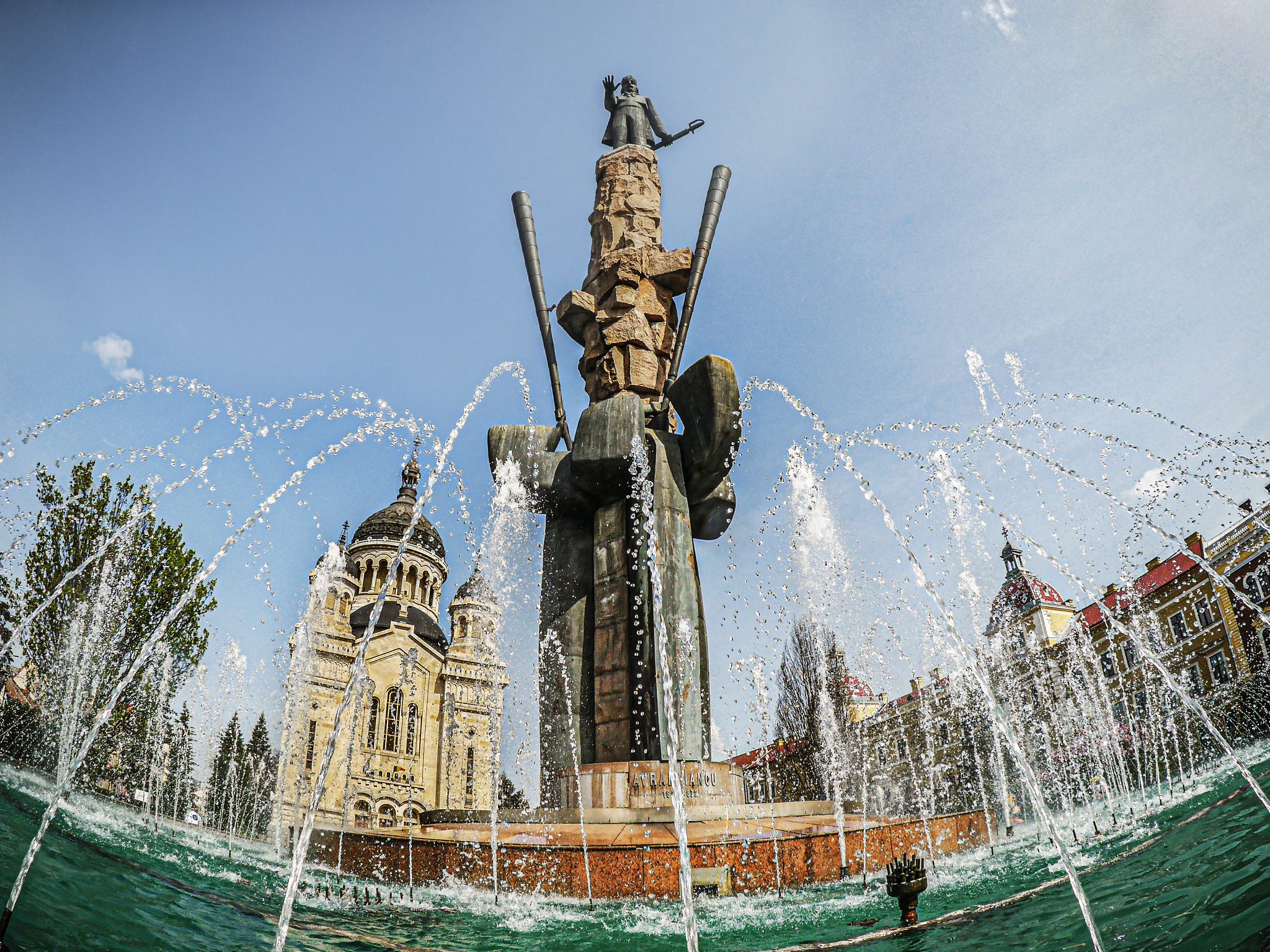 The Avram Iancu statue (in honor of the Transylvanian Romanian lawyer and revolutionary Avram Iancu) is the centerpiece of the square that also bears his name. 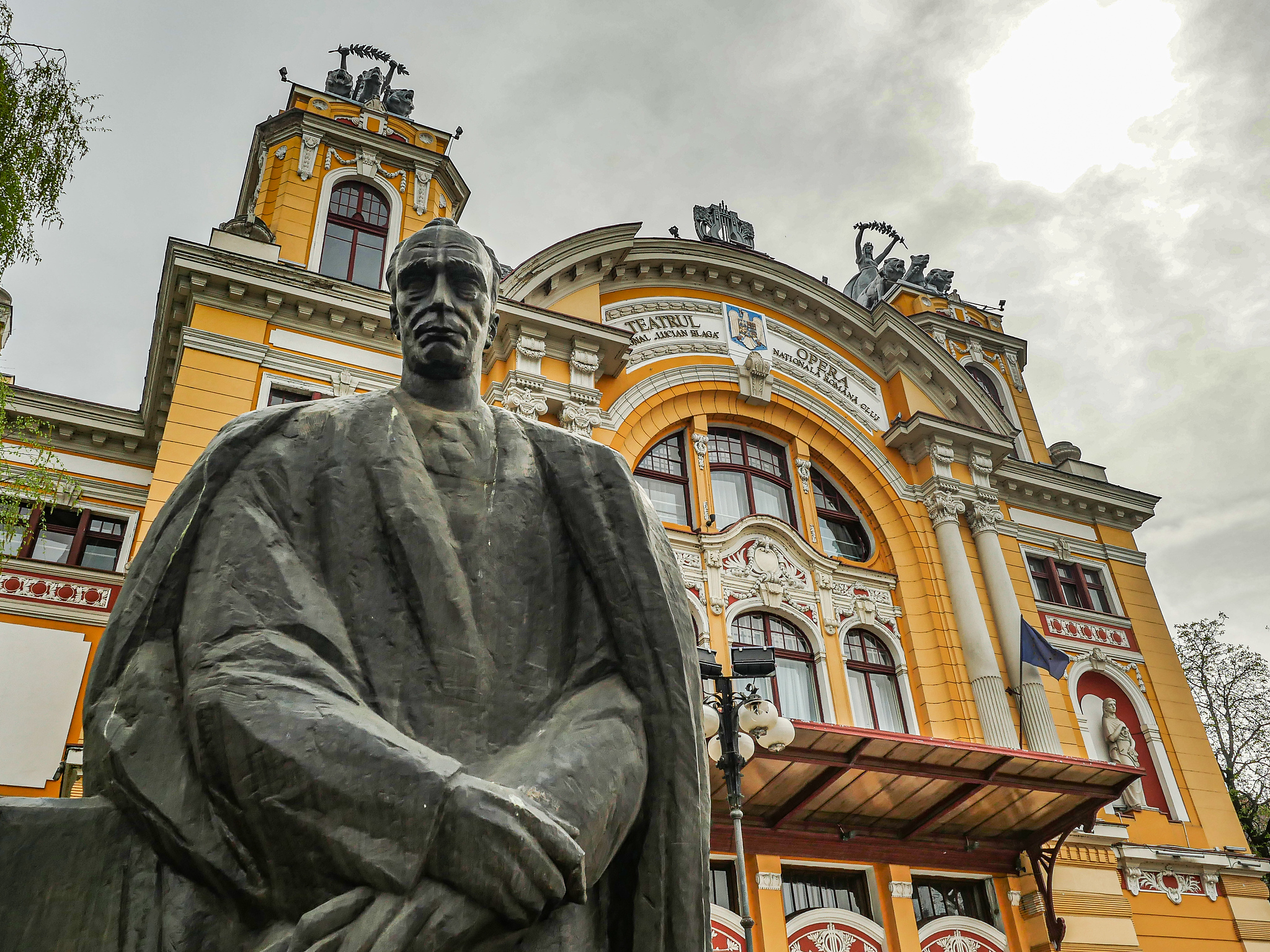 The Lucian Blaga National Theatre (Teatrul Naţional Lucian Blaga) in Cluj-Napoca is one of the most prestigious theatrical institutions in Romania. The theatre shares the same building with the Romanian Opera and was built between 1904 and 1906 by the famous Austrian architects Ferdinand Fellner and Hermann Helmer. A statue of Lucian Blaga, a Romanian philosopher, poet, playwright and novelist, stands outside the Theatre. 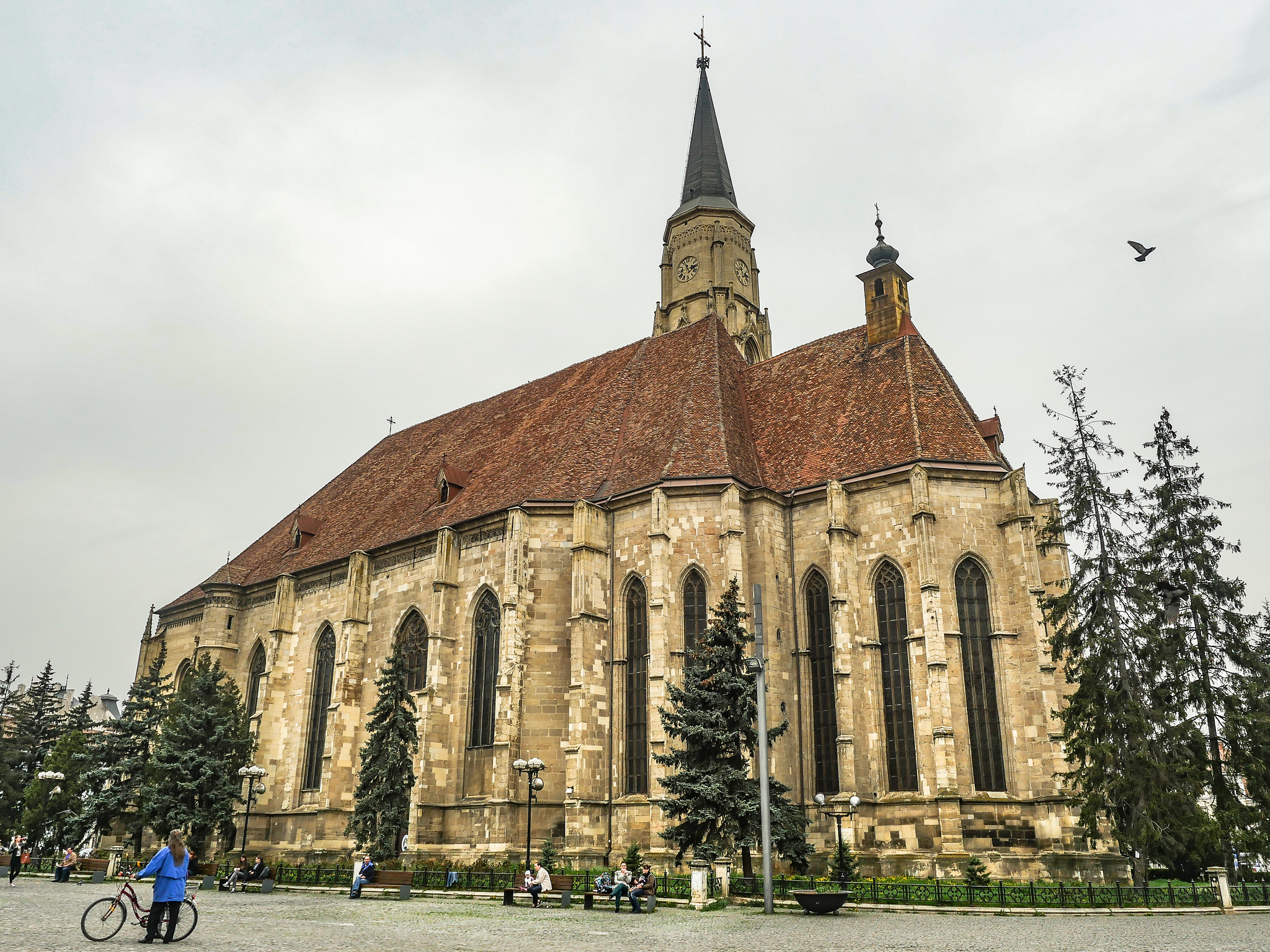 The St. Michael’s Church (Biserica Sfântul Mihail) is the second largest church (after the Black Church of Brașov) in the geographical region of Transylvania, Romania. The construction was completed between 1442-1447, the old tower was built between 1511-1545. The tower that stands today was erected in 1862. 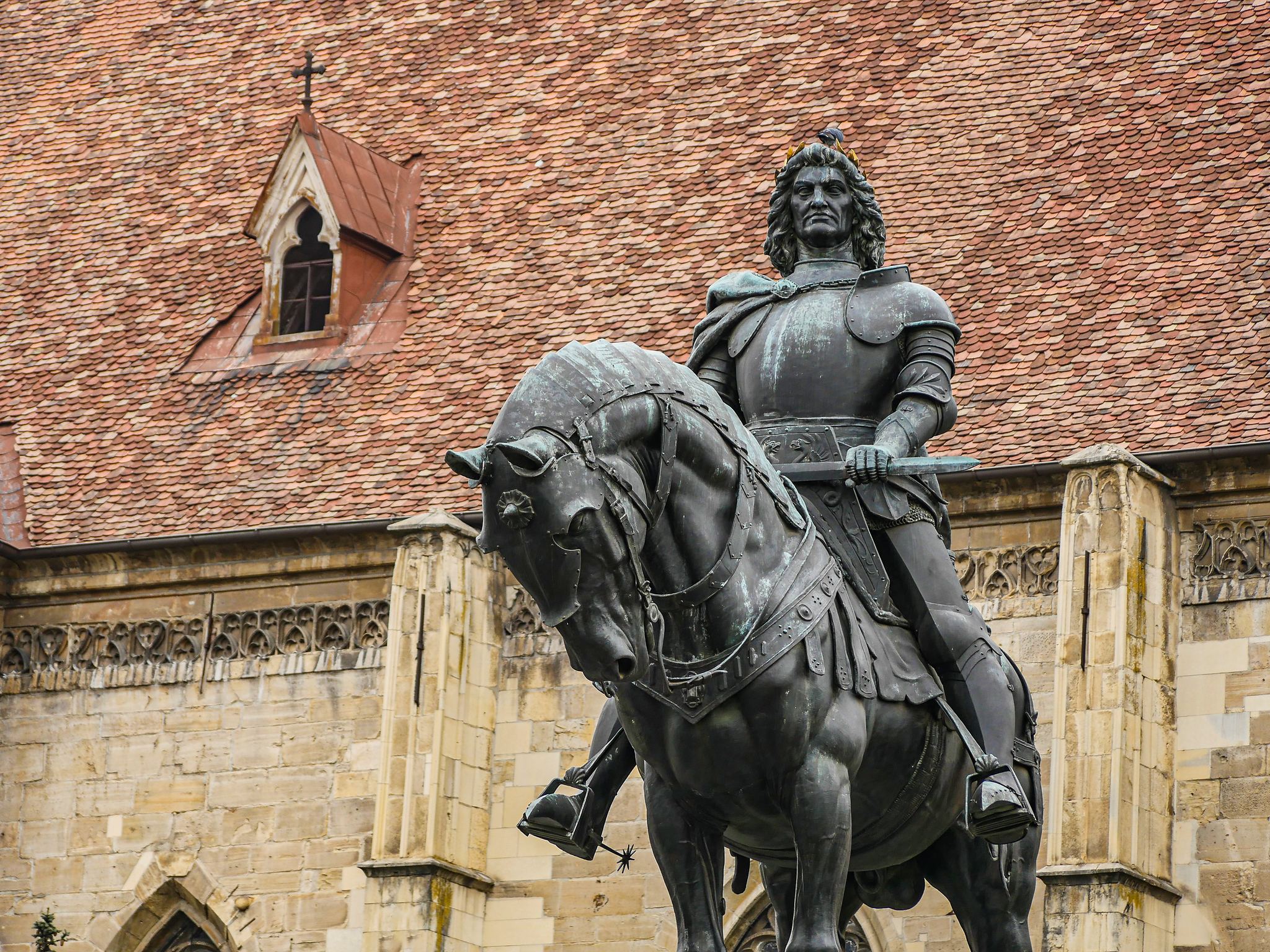 The Statue of King Mátyás (a Clujan man who had become king of Hungary from 1458 to 1490) stands before St. Michael’s Church and is the centerpiece of Piaţa Unirii (Romanian for Union Square). The statue was created by Hungarian sculptor János Fadrusz and was unveiled in Cluj-Napoca in 1902.

The Mirror Street (Iuliu Maniu Street) is a unique attraction in Transylvania, the West side of Iuliu Maniu Street in Cluj-Napoca was built symmetrically in the 19th century, in eclectic style, following the trends of those days, inspired by French architect Georges-Eugène Haussmann who systematized Paris in a modern conception. 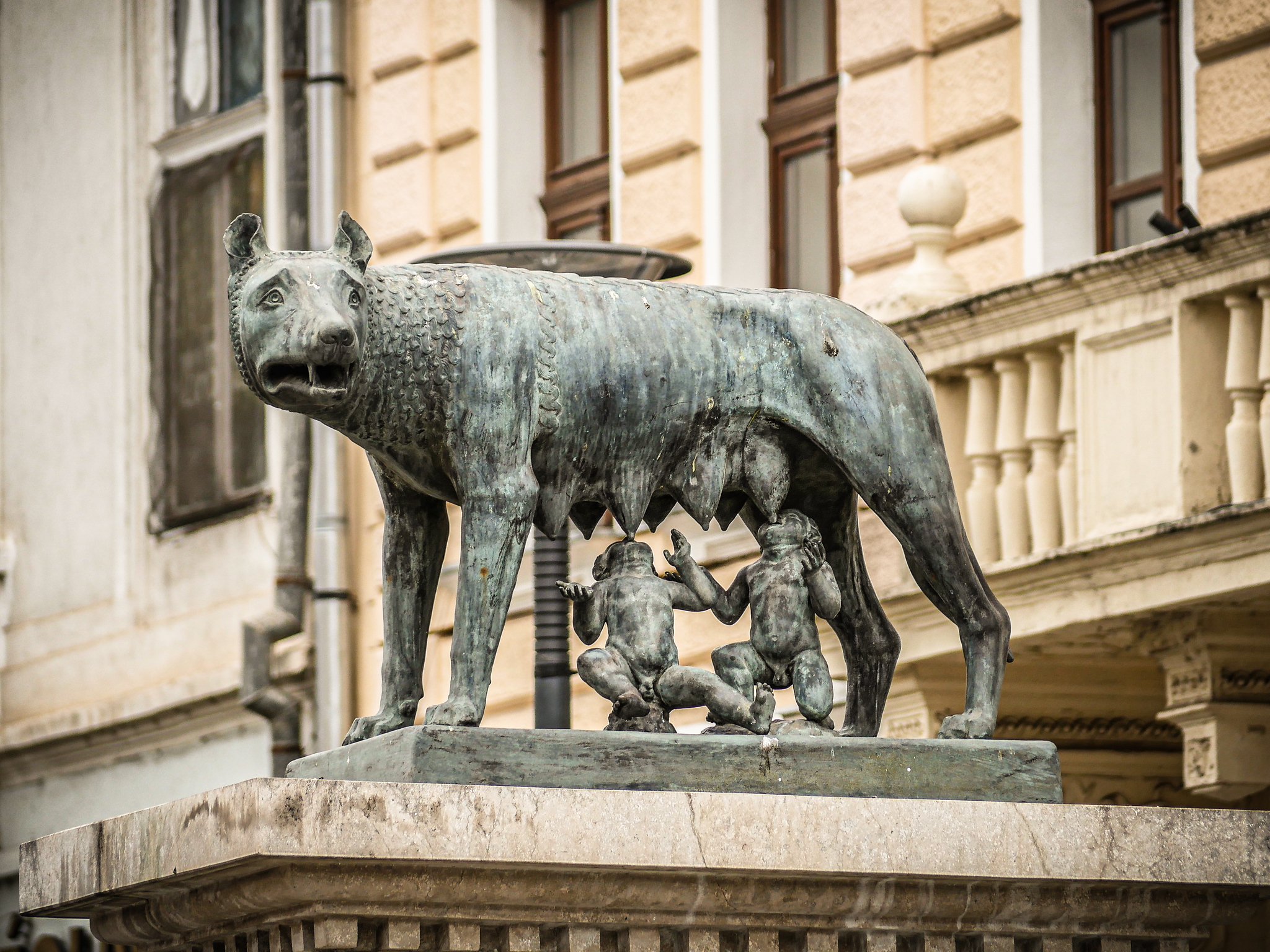 The Capitoline Wolf Statue was a gift to Romania by Italy after the Union of Transylvania with Romania was declared on 1 December 1918. Romania received five copies of the statue which were placed in various Romanian cities. The statue symbolises the unity of Romanians from all parts of the country and their Latinity. The original Capitoline Wolf (Italian: Lupa Capitolina) is a bronze sculpture depicting a scene from the legend of the founding of Rome. The sculpture shows a she-wolf suckling the mythical twin founders of Rome, Romulus and Remus. The age and origin of the Capitoline Wolf are controversial. The wolf portion of the statue is likely to have been cast between 1021 and 1153 with the twins added in the late 15th century AD, probably by sculptor Antonio Pollaiolo. 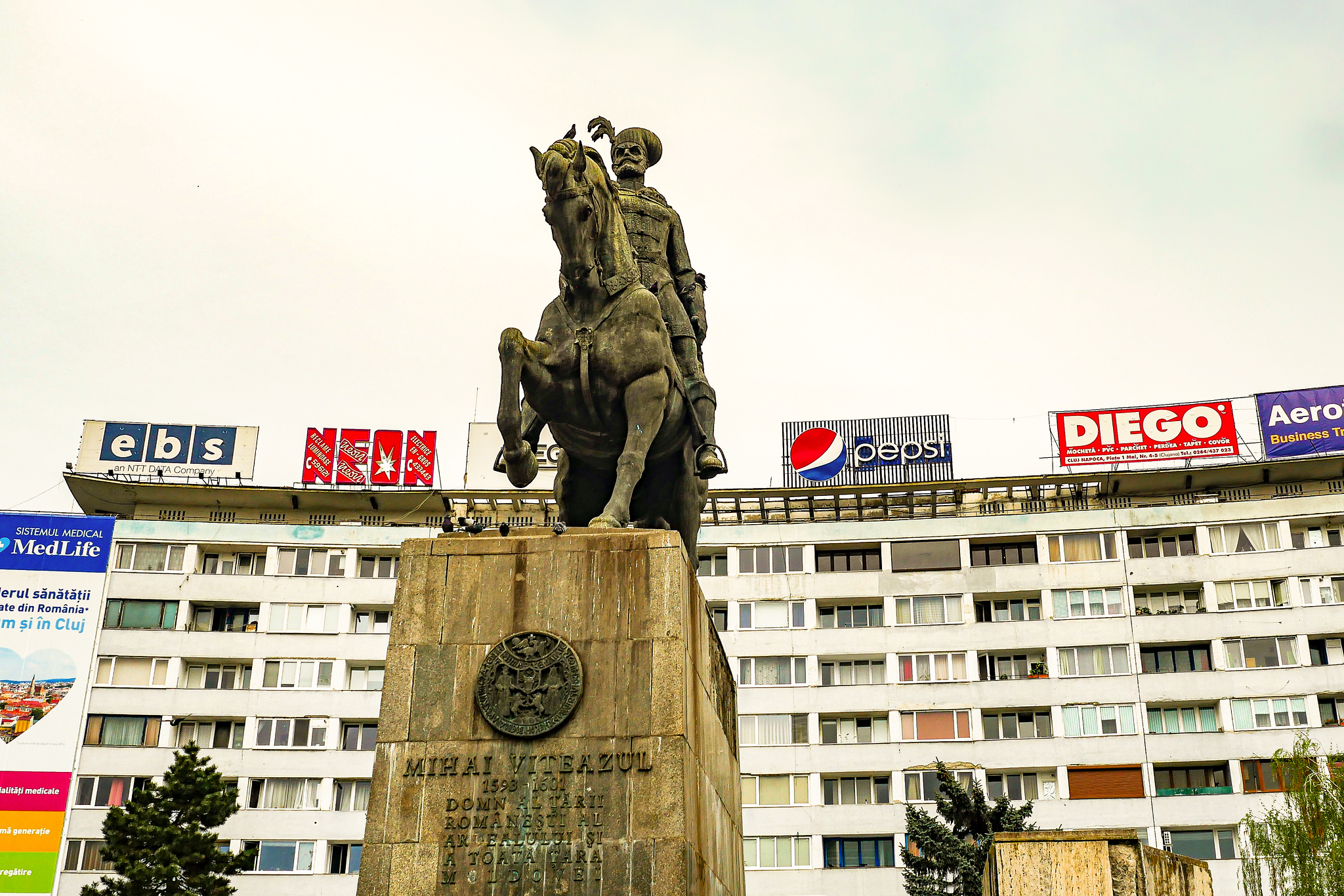 The Equestrian Statue of Michael the Brave, who was the Prince of Wallachia, Transylvania and of Moldavia from 1558-1601. The statue was unveiled on 17 December 1976, the work of Romanian sculptor Marius Butunoiu and is located in the middle of the square that bears his name. Behind the statue, an example of a communist-era housing project adorned with billboard advertising. 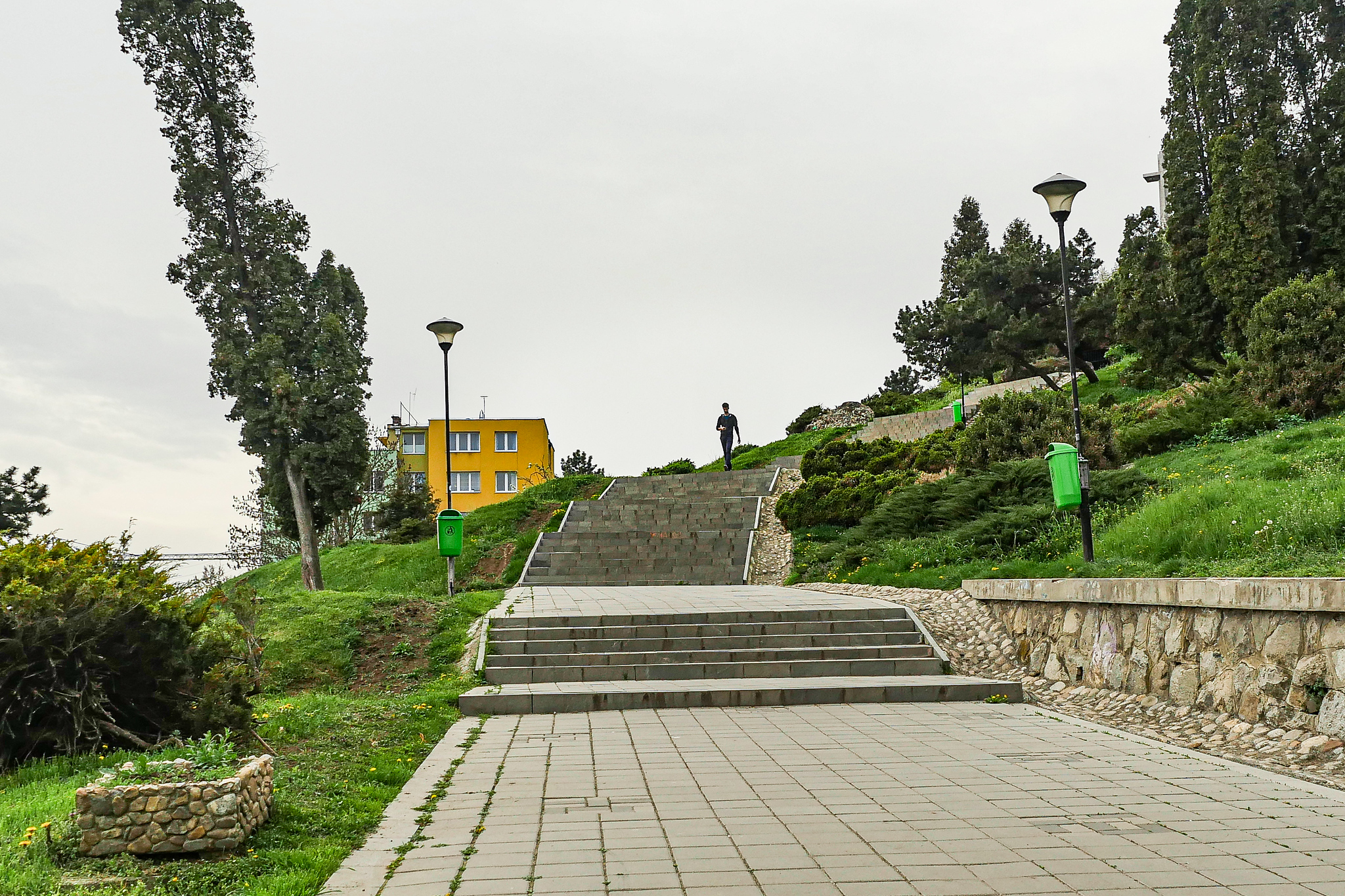 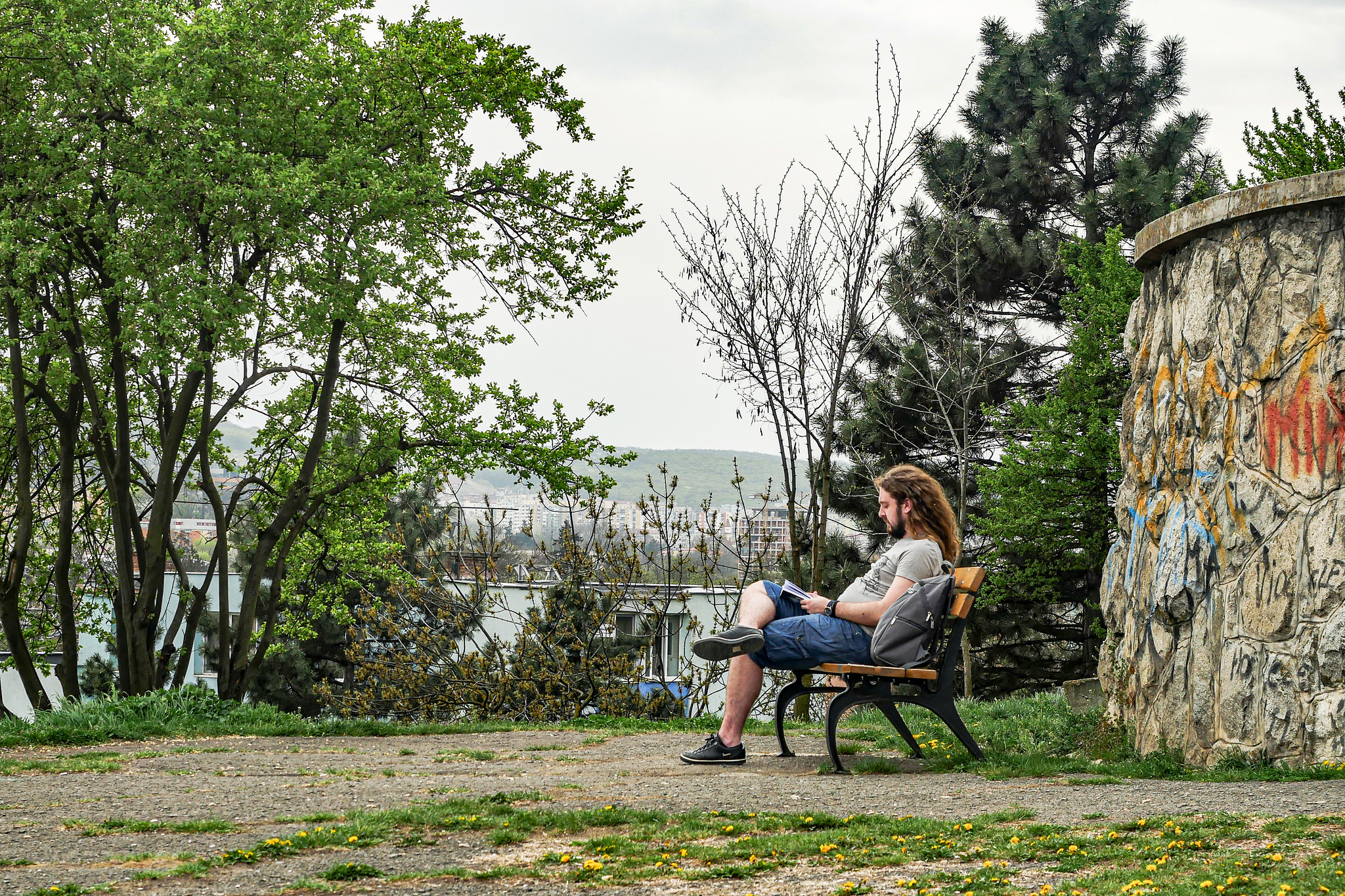 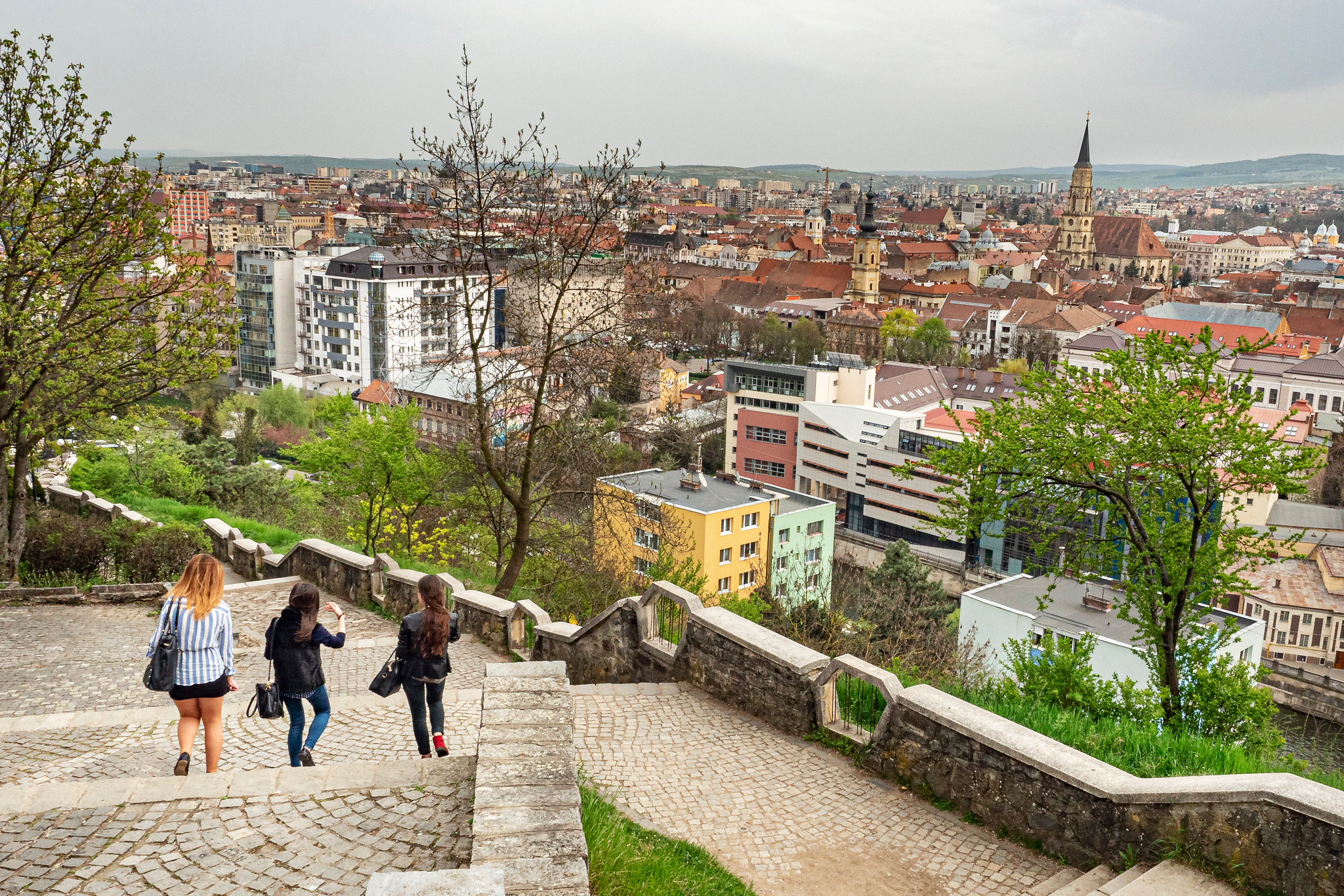 At 405 metres above the sea level, Fortress Hill offers those who make the climb some beautiful panoramic views of Cluj-Napoca 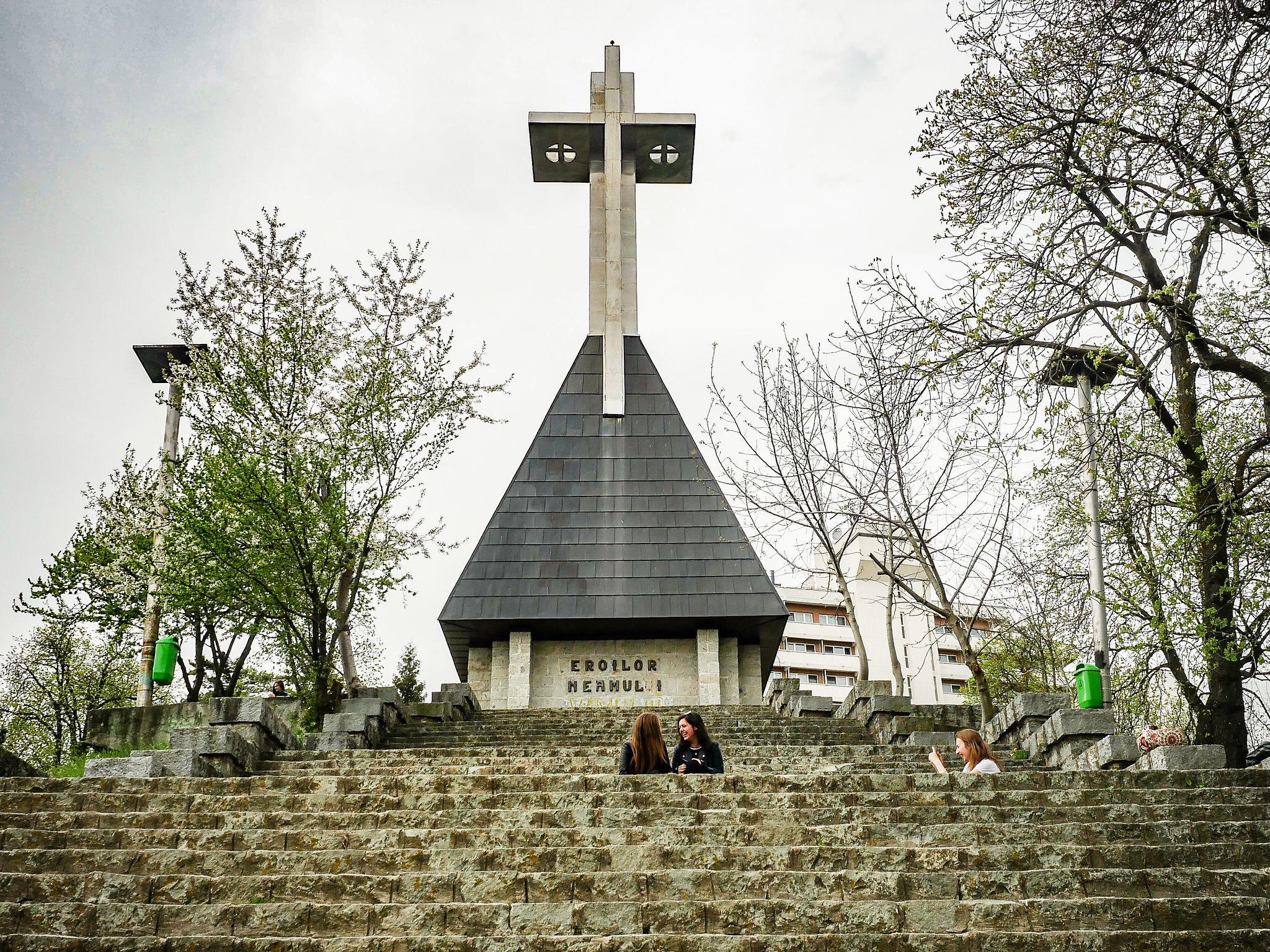 A large iron cross atop Fortress Hill, a tribute to the martyrs of 1848 Revolution, was placed here in 1995, replacing one that was demolished in 1950 by the communist authorities. 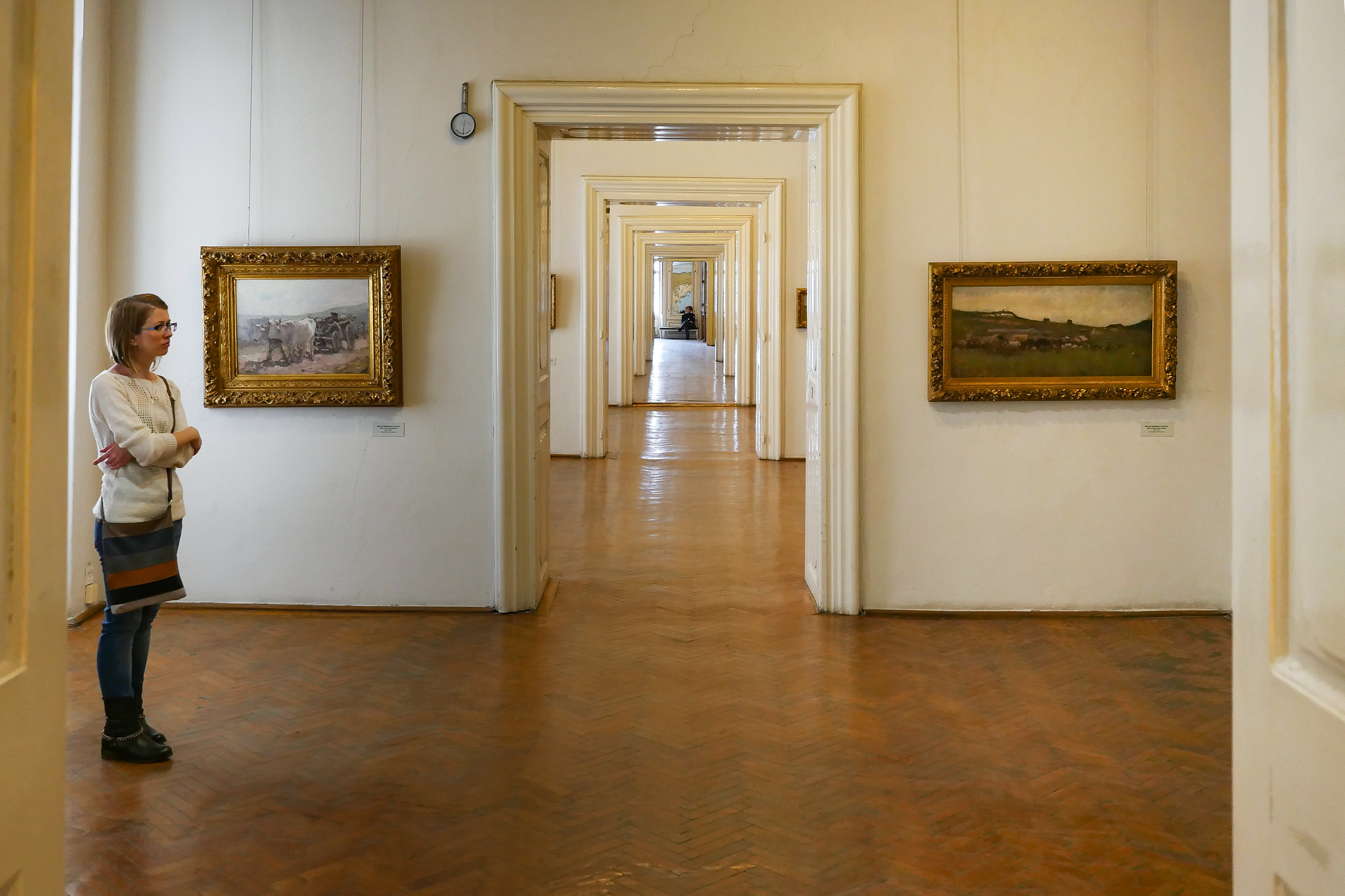 The National Museum of Art Cluj-Napoca 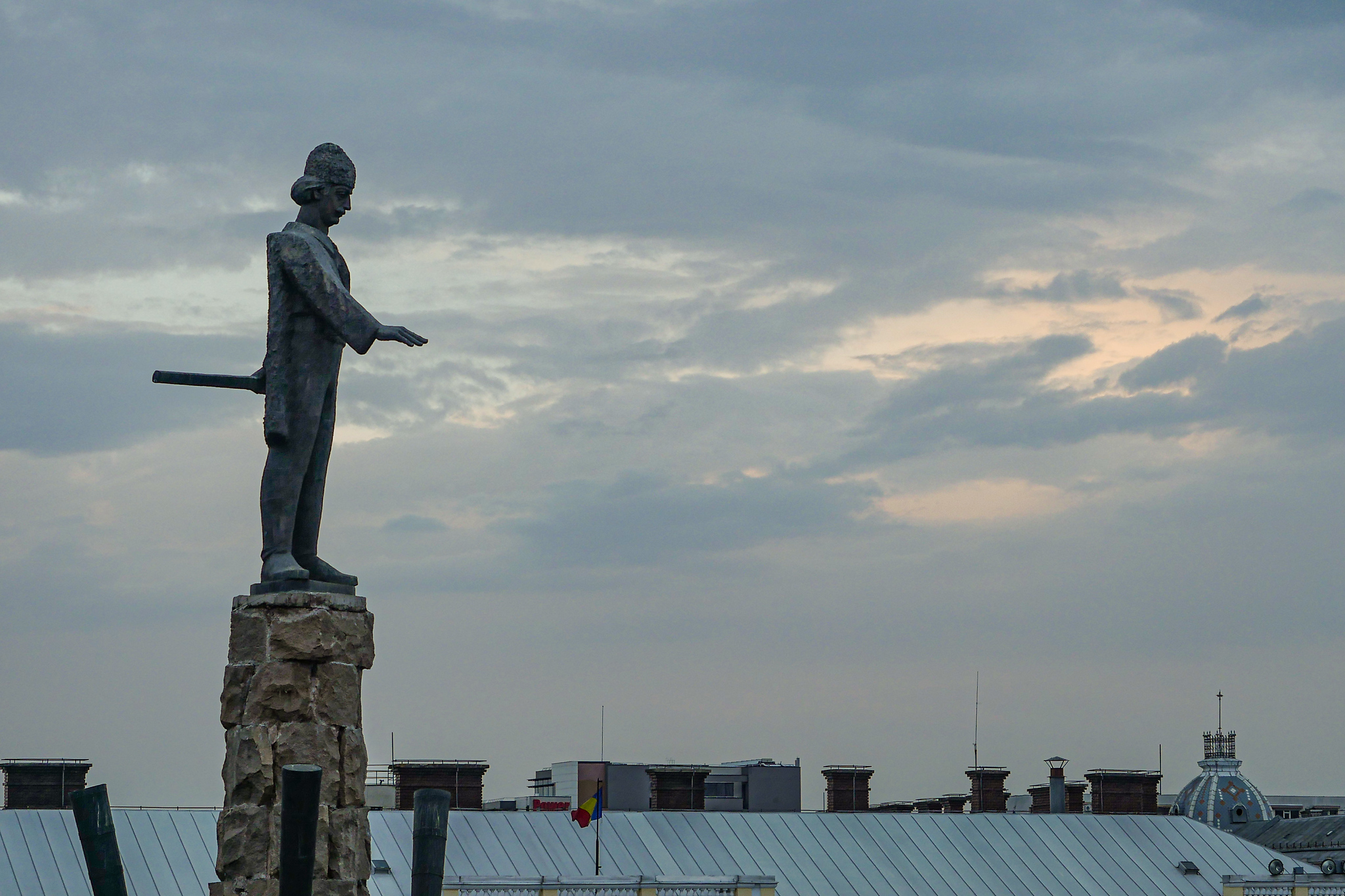 Dusk from the terrace of our hotel room, the Avram Iancu statue towers over the square that also bears his name.

Cluj-Napoca is a charming city well worth a visit. For more information on this Romanian City, visit www.visitclujnapoca.ro

Written By DanPerezPhotography On April 18, 2016