May 2, 2016
SubscribeShareTweetShareShareShareSaveMail
#mc_embed_signup{background:#fff; clear:left; font:14px Helvetica,Arial,sans-serif; } /* Add your own Mailchimp form style overrides in your site stylesheet or in this style block. We recommend moving this block and the preceding CSS link to the HEAD of your HTML file. */

Spent a full day and a half (accompanied by Mrs. Perez) in a city that, in the period between the two World Wars, was renowned as the “Paris of the East” for its luxurious restaurants, exotic nightlife and elegant architecture. And although buildings and districts in the historic city center were heavily damaged or destroyed by war, earthquakes, and above all, former communist dictator Nicolae Ceaușescu’s program of systematization, the city is slowly regaining that title.

Bucharest was first mentioned in documents in 1459. It became the capital of Romania in 1862 and is the center of Romanian media, culture, and art. It is home to just under 1.9 million inhabitants, while its metropolitan area bulges up to 2.2 million. During my short day and a half there, I found it to be a city in transition, a city in the process of reanimating itself while still trying to maintain the historic charm of its glory days. A city that required more than just a day and a half to fully understand.

That said, Mrs. Perez and I journeyed to the city’s “Old Town” via the city’s most famous thoroughfare, Calea Victoriei (Victory Avenue) and as I am wont to do, I brought along my camera (the Panasonic GH4) and a few good lenses – enjoy the photos…

The statue of Mihai Eminescu, a Romantic poet, novelist and journalist, often regarded as the most famous and influential Romanian poet, stands before the Romanian Athenaeum, a concert hall in the center of Bucharest. The work of French architect Albert Galleron, the building opened in 1888 and is the city’s main concert hall. 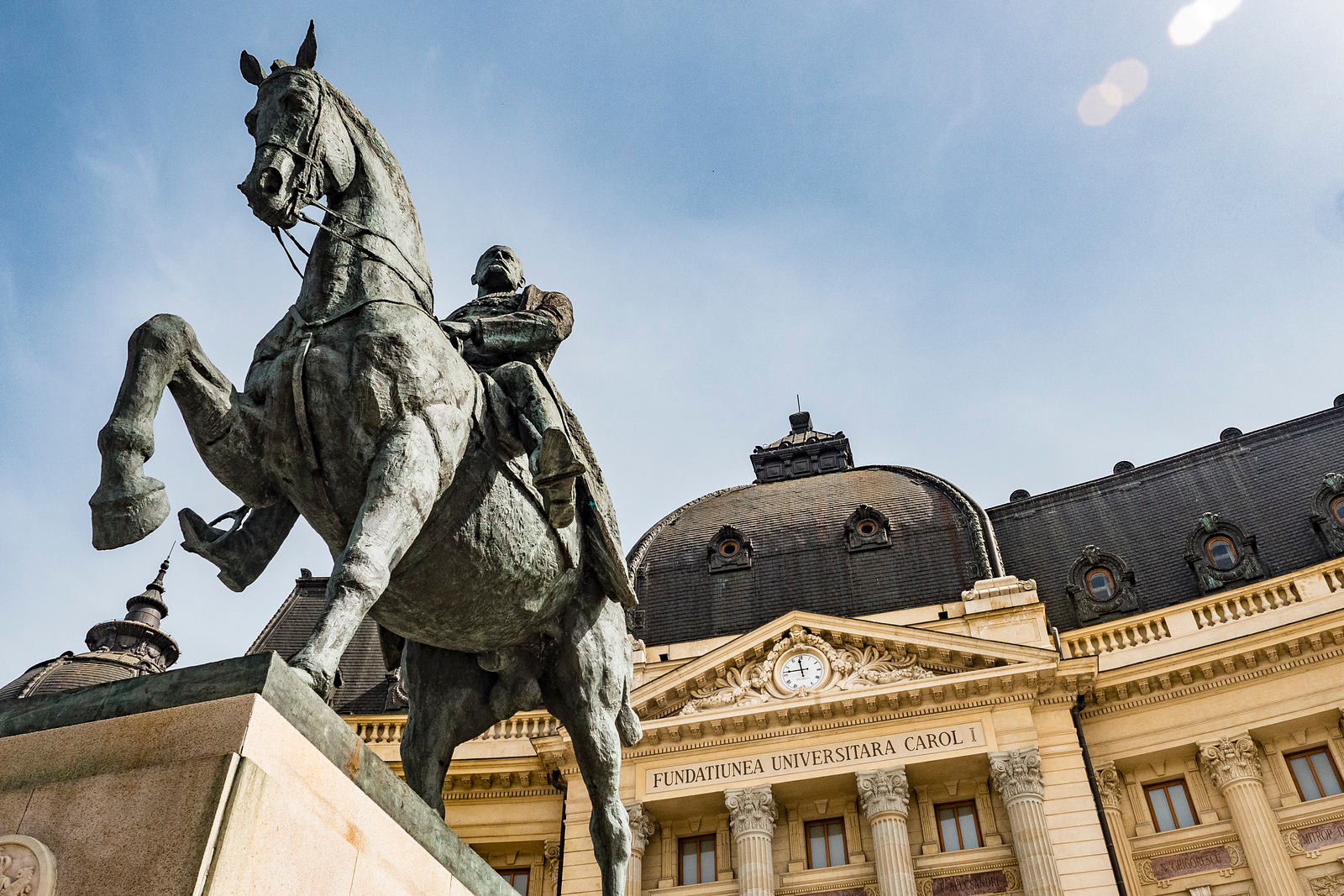 A statue of Carol I, the ruler of Romania from 1866 to 1914, created by Croatian sculptor Ivan Meštrović in 1930, is the centerpiece of Revolution Square, (formerly Palace Square until 1989 when it was renamed after the 1989 Romanian Revolution). The monument of Carol I was melted by the communists in 1948 after the soviet occupation of Romania to make a gigantic statue of Lenin. In 2005, the Romanian Minister of Culture decided to recreate the destroyed statue from a model that was kept by Meštrović’s family and assigned the project to the sculptor Florin Codre. The new bronze statue was was re-erected on its original spot in 2010 and stands before the Central University Library, which was founded in 1895 and designed by French architect Paul Gottereau. 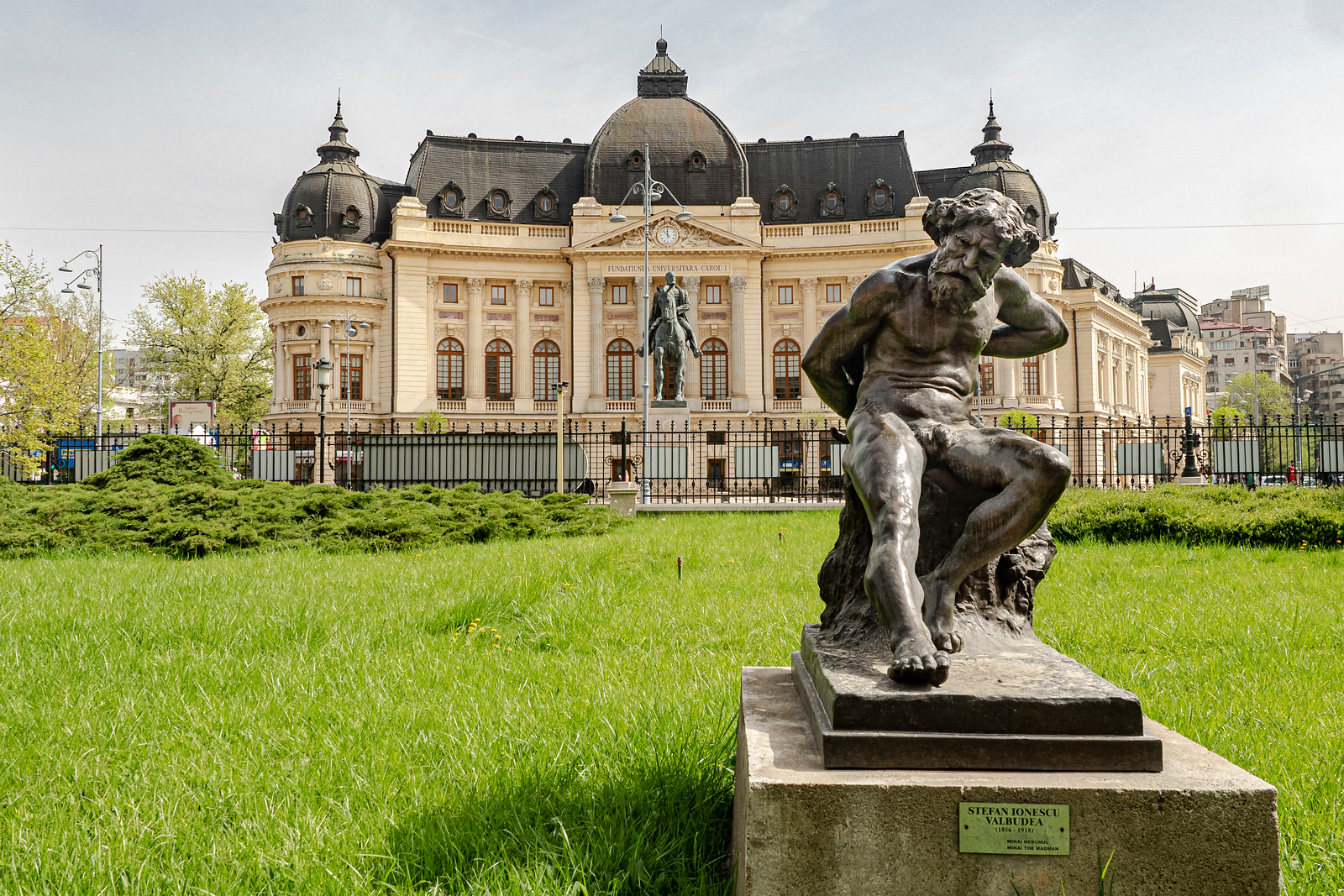 Right across from the statue of Carol I and Revolution Square (and right in front of the National Museum of Art of Romania), you’ll find a sculpture of ‘Mihai the Madman’ by Stefan Ionescu-Valbudea (1856-1918)

Also on the grounds outside the museum, you’ll find ‘Izvorul’ (The Spring) by by Romanian sculptor Ioan Georgescu (1856-1898)

Completed in 1837, the National Museum of Art of Romania features collections of medieval and modern Romanian art, as well as the international collection assembled by the Romanian royal family. 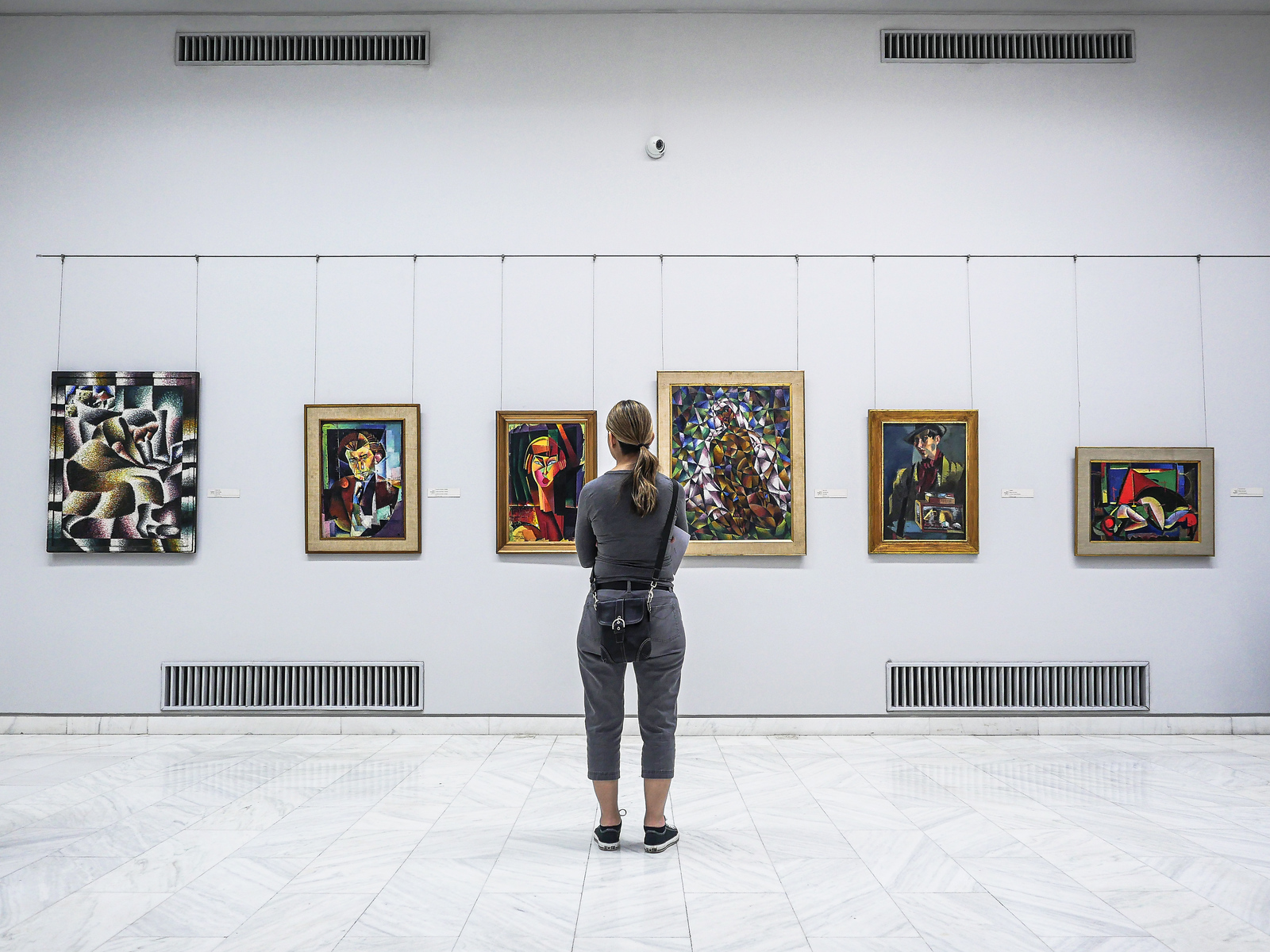 The Memorial of Rebirth is a memorial in Bucharest that commemorates the struggles and victims of the Romanian Revolution of 1989, which overthrew Communism. The memorial complex was inaugurated in August 2005 in Revolution Square, where Romania’s Communist-era dictator, Nicolae Ceausescu, was publicly overthrown in December 1989. The memorial, designed by Romanian designer Alexandru Ghilduş, features as its centerpiece a 25-meter-high marble pillar reaching up to the sky, upon which a metal “crown” is placed. The monument sparked a significant amount of controversy when it was inaugurated in 2005, mainly to do with its design. Locals have described it as “a potato skewered on a stake” and “olive on a toothpick”.

A statue of Iuliu Maniu, one of Romania’s foremost politicians, as a “Broken Man” with an unbreakable spirit. Iuliu Maniu (January 8, 1873 – February 5, 1953) served as the Prime Minister of Romania for three terms during 1928–1933. The conservative politician was a fierce opponent of the Fascist dictatorship of Ion Antonescu and the post-WWII communist regime. This resulted in imprisonment and later death. The symbolism is clearer here: Maniu was broken (the bronze sculpture is obviously made of several pieces), but still sits upright. His statue, the work of Romanian artist Mircea Spătaru, is located in the Revolution Square.

The building behind the statue of Iuliu Maniu is the former headquarters of the Central Committee of the Romanian Communist Party. It was from the top of this building where Romania’s Communist-era dictator, Nicolae Ceaușescu and his wife, fled the capital in a helicopter after his regime was overthrown in the Romanian Revolution of 1989. Ceaușescu and his wife were captured by the armed forces and charged with illegal gathering of wealth and genocide. A mere three days after fleeing Bucharest, they were sentenced to death and immediately executed by a firing squad of three soldiers (reportedly hundreds of others also volunteered). 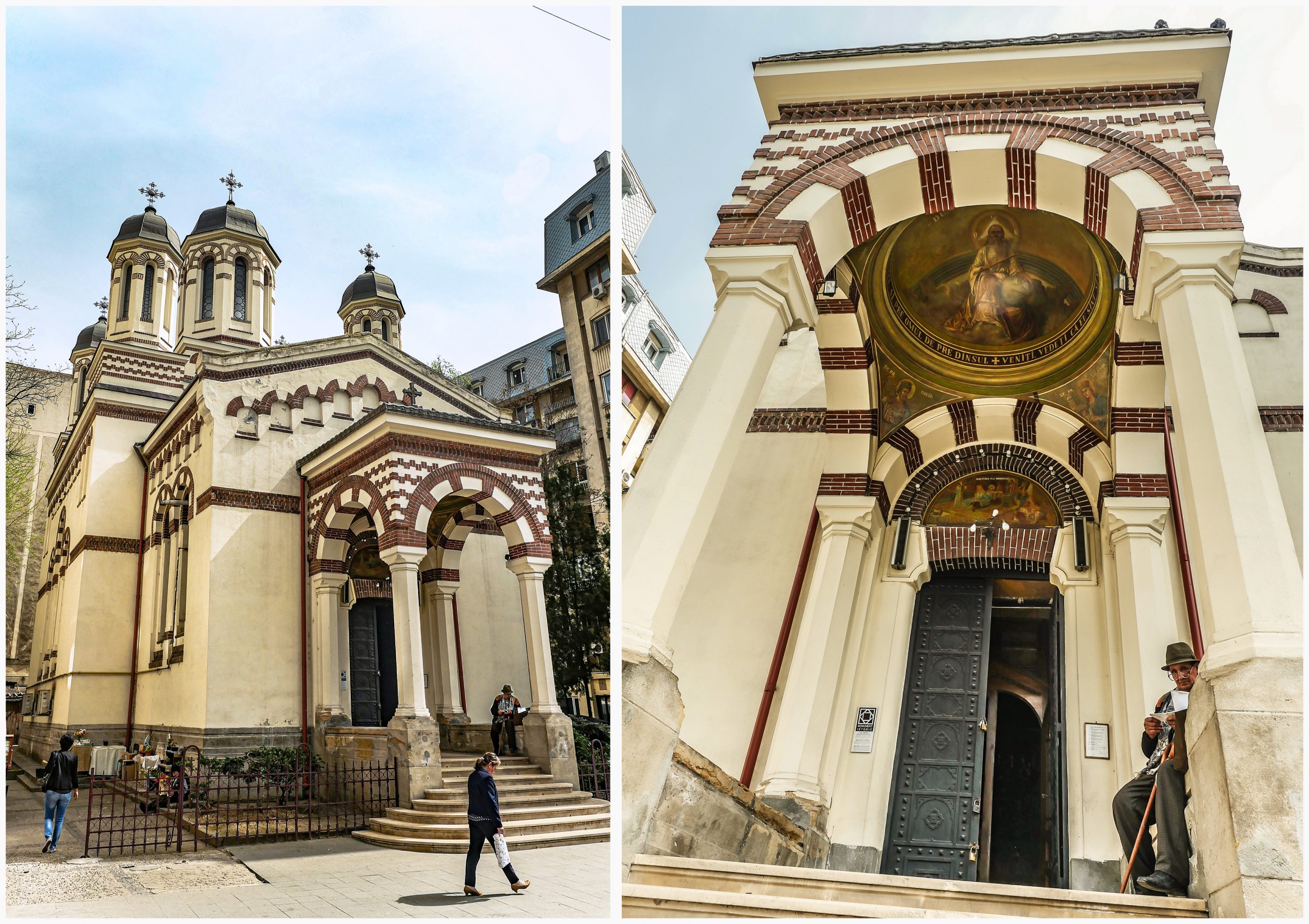 The Zlatari Church (Biserica Zlatari) was built in the 19th century and is best known for its interior frescoes by Gheorghe Tatarescu (1818-1894), a Romanian painter and a pioneer of neoclassicism in his country’s modern painting.

Lipscani is a street and a district known mainly for its restaurants and bars. From the Middle Ages to the early 19th century, it was the most important commercial area of the city. All trades were found in the area, including goldsmiths, hatters, shoemakers, tanners, and saddlemakers. 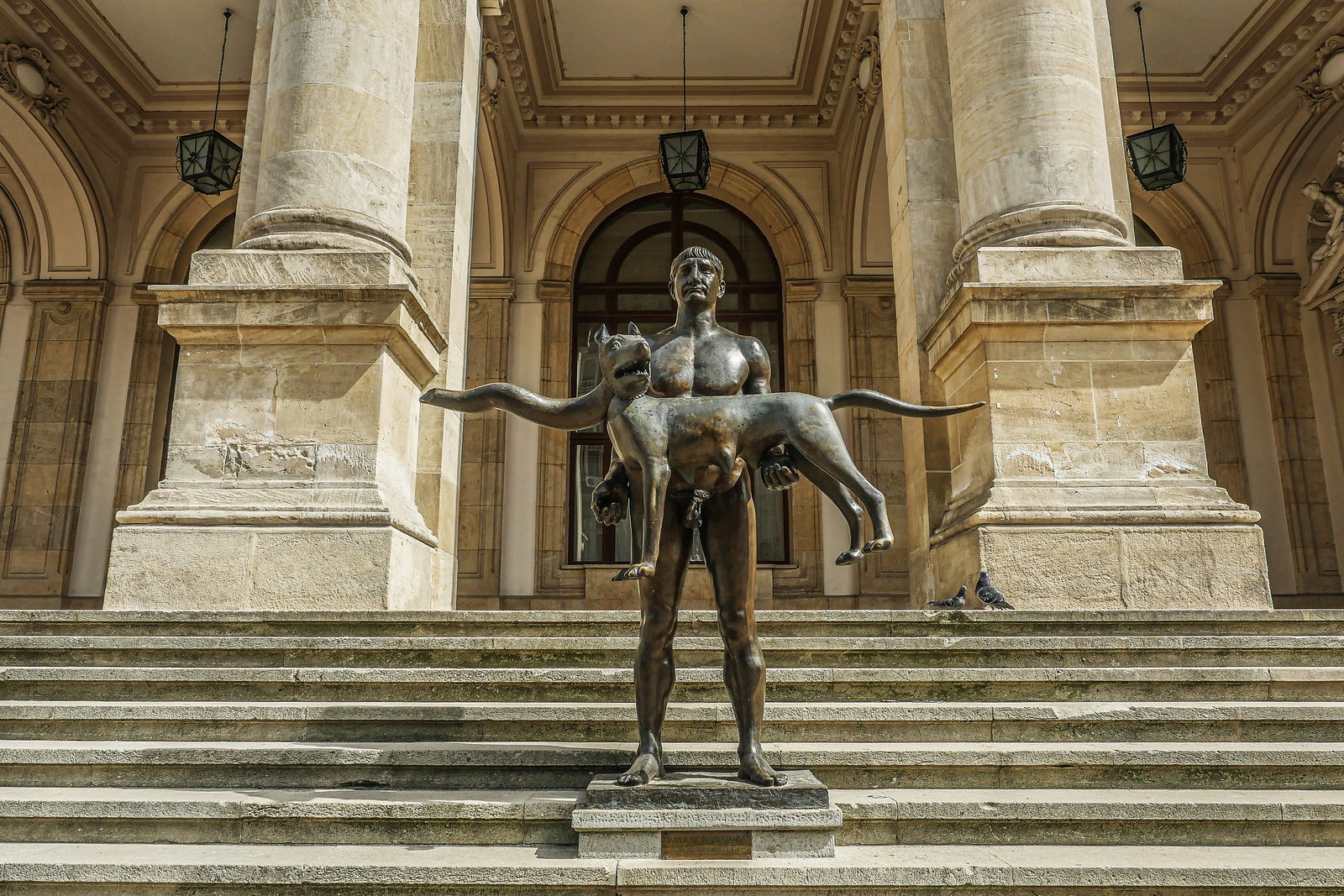 The Statue of Trajan and the She-wolf is a statue by Romanian sculptor Vasile Gorduz and is located on the steps of the National Museum of Romanian History on Calea Victoriei.

Stavropoleos Church (Romanian: Biserica Stavropoleos) is an Eastern Orthodox monastery for nuns in central Bucharest, Romania. Built in 1724, the church is characterized by its beautiful stone and wood carvings.

The city’s most famous thoroughfare, Calea Victoriei (Victory Avenue) features two-way bicycle lanes (protected from the main traffic by a concrete divider) that run all through Bucharest’s downtown area (they even had their own traffic lights)

Michael the Brave (Mihai Viteazu) was the ruler of Wallachia, Transylvania, and Moldavia in 1593–1601. His equestrian statue (by French sculptor Albert-Ernest Carrier-Belleuse) was placed at Bucharest University in 1874 and was the first equestrian statue and second public monument in Bucharest.

Fisheye view of Kretzulescu Church (Romanian: Biserica Kretzulescu or Crețulescu) which was commissioned in 1720–1722. It’s an Eastern Orthodox church in central Bucharest located on Calea Victoriei at one of the corners of Revolution Square, next to the former Royal Palace.

Beautiful Herăstrău Park is spread over 187 acres around Herăstrău Lake and was one of the the highlights of our time spent in this unique city.

Written By DanPerezPhotography On May 2, 2016