Last month, I took the family for a vacation in Spain and decided to skip the tourist-laden cities of Madrid, Barcelona and Seville in favor of Extremadura, an autonomous community of southwestern Spain bordering Portugal and comprised of the provinces of Cáceres and Badajoz. The region, which is home to three UNESCO World Heritage sites as well as a Biosphere reserve, is one of Spain’s best kept secrets.

In Roman times, Extremadura was an important part of the Iberian peninsula. it lay astride the Via Delapidata, a major trade route for the commerce of tin and copper that crossed Roman Iberia from the north coast to the south. With a population density of under 30 inhabitants per sq. km, Extremadura is one of the least populated areas of Spain – meaning that it has plenty of empty spaces and open countryside.

We started our trip in Madrid (check out the photographs HERE) then picked up the car I rented with AutoEurope (great experience) and drove out of Madrid on the morning of our third day in Spain. Our first stop (because it was kind of on the way) was the medieval city of Ávila (about 70 miles northwest of Madrid), a city with a history that dates back to 700 BC. 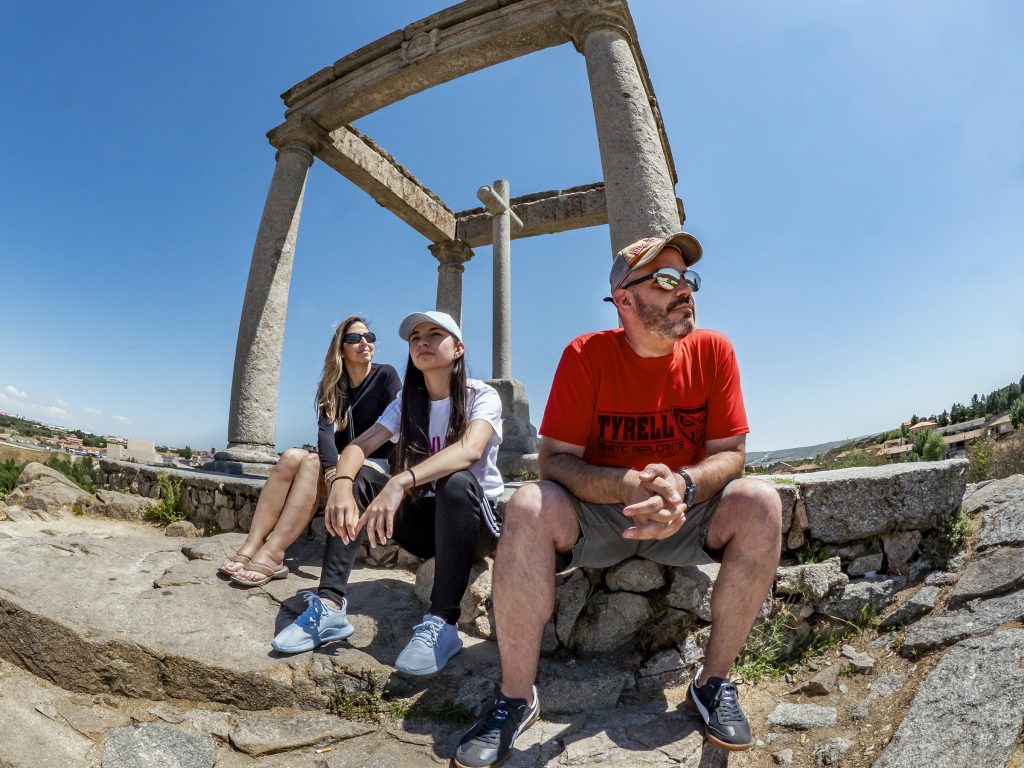 Before we entered the medieval city, however, we stopped off at Los Cuatro Postes (The Four Posts), a little shrine 1.5km outside the walled city of Ávila. A cross covered by a four-posted canopy marks the spot where seven year old Teresa of Ávila and her brother Rodrigo were caught by their uncle when they were on their way to the south to spread the word of God to the Moors, not concerned by the fact that they might be killed in the attempt since that would turn them into martyrs. The sight offers a spectacular view of the walled city. 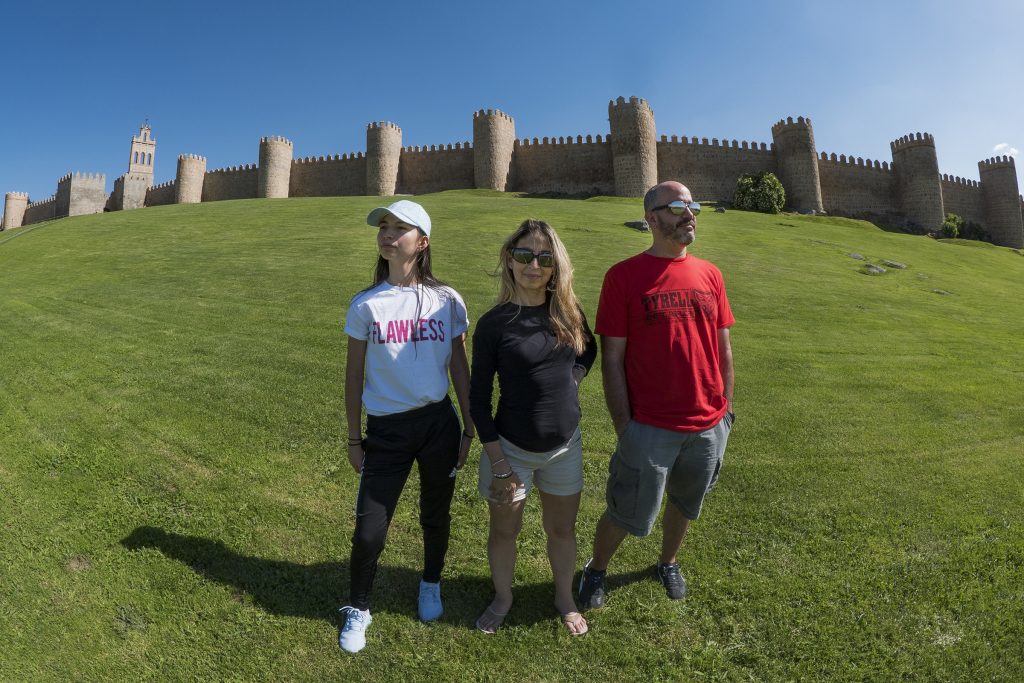 Ávila has a magnificently well-preserved city wall which was built in the 11th century to protect the Spanish territories from the Moors. Ávila’s Old Town has been designated a World Heritage Site by UNESCO. 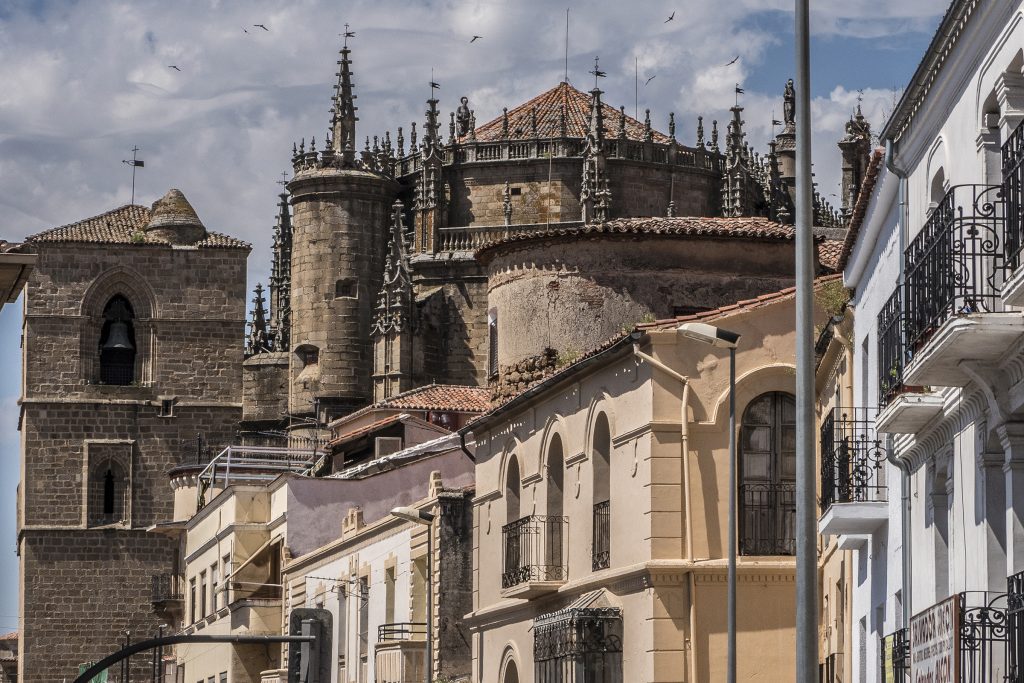 From there, we drove into Extremadura to the ancient city of Plasencia (approximately 2.5 hours driving) where we had a late dinner in the city’s Plaza Mayor. I was only able to spend a few hours the next day in the main square and I shot a few images of the cathedral, which actually consists of two buildings: the old (Catedral Vieja) and the new (Catedral Nueva). Construction began in the 13th-century in a mostly Romanesque style. The 15th-century “new” church (New Cathedral of Plasencia or Catedral de Asunción de Nuestra Señora) was built in Gothic architectural style with high ceilings. I didn’t have time to go inside due to a tight itinerary but I wish I had spent more time walking the old town. We did have a lovely stay at the Hotel Exe Alfonso VIII. 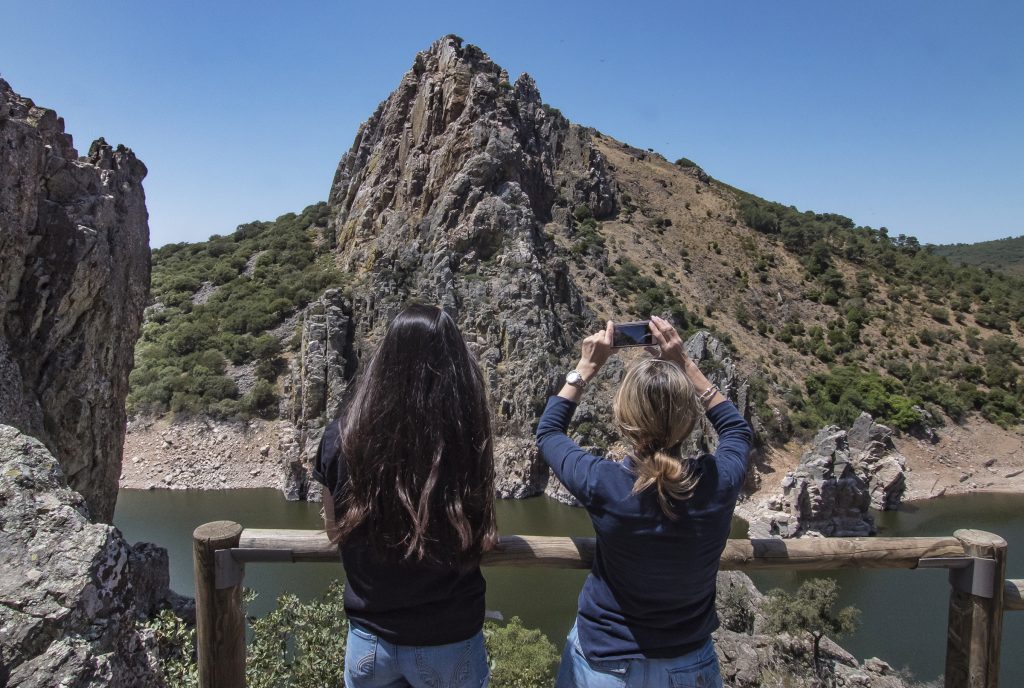 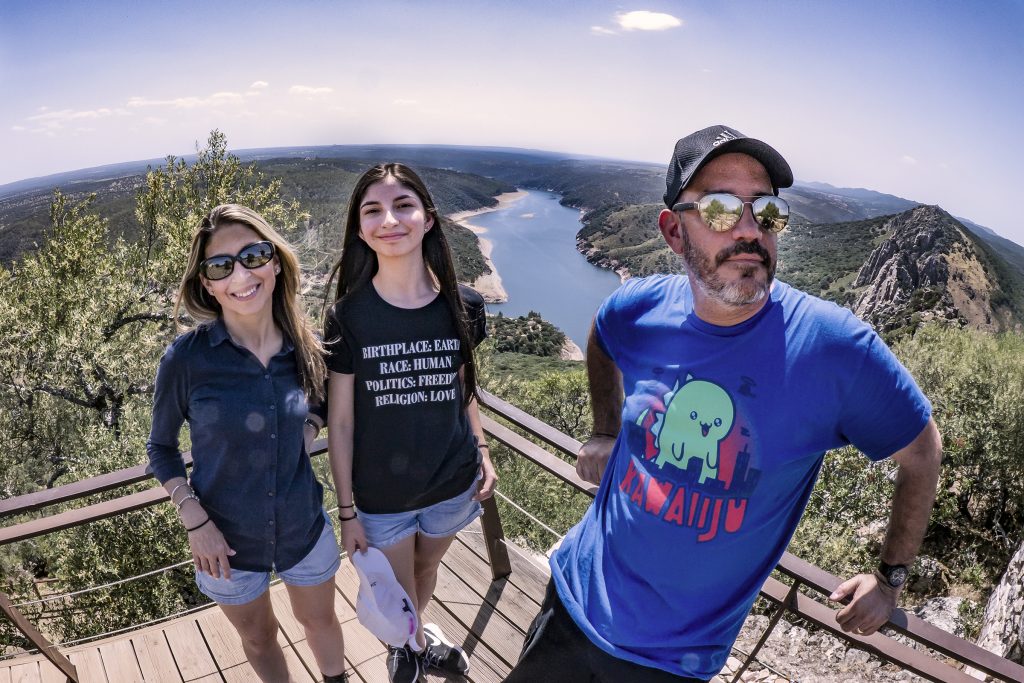 Next stop was a 30 minute drive to Monfragüe National Park, the largest and best preserved Mediterranean forest worldwide. Surrounded by the Tagus and Tiétar rivers, Monfragüe takes its name from the Romans, who called it Mons Fragorum, the fragmented mountain. It was declared a Biosphere Reserve by UNESCO in 2003 and is one of the most popular birdwatching sites in all of Spain with black storks, vultures, Egyptian vultures and imperial eagles making their nests in the cliffs. We drove through it making a few stops along the sightseeing route. 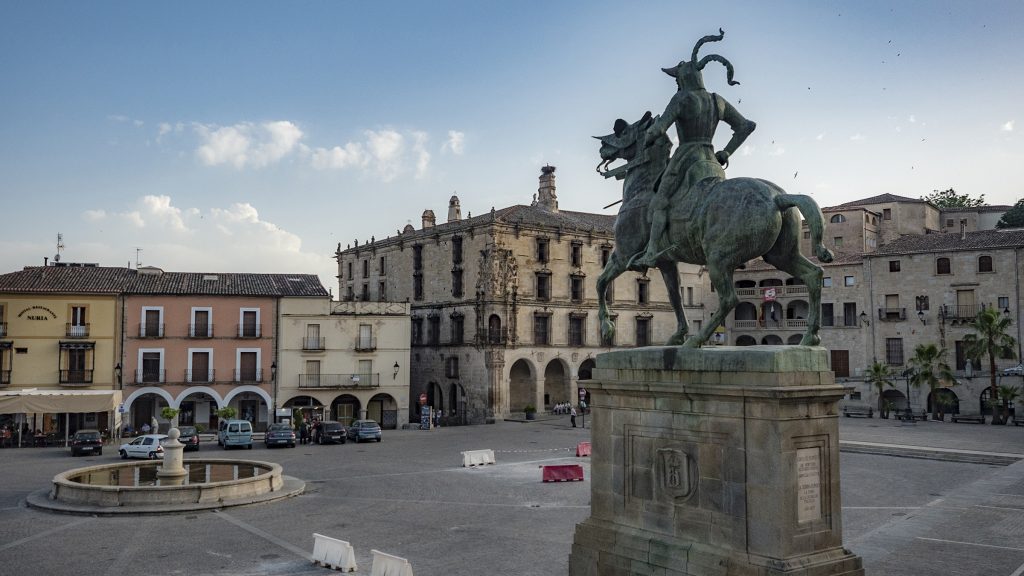 Our next stop was supposed to be Guadalupe for a few hours, then to Trulillo for the night but we were spent and headed straight for Trujillo (about a 40 minute drive). After being occupied by Romans and Visigoths, Trujillo remained under Arabic dominion for over 500 years, during which time it underwent notable development. It then passed into Christian hands after being conquered in 1232 by King Fernando III, and it was monarch Juan II that gave Trujillo the title of city in 1430. The city was the home of two great conquerors: Francisco de Pizarro, discoverer of Peru, and Francisco de Orellana, who founded the city of Guayaquil in what is now Ecuador.

The next morning, we headed for Guadalupe (about 90 minutes driving) to visit the Royal Monastery of Santa María de Guadalupe, which was stunning. There are tours that take you into the monastery (alas, they don’t allow photographs) but the exterior and the plaza were worth the trip. 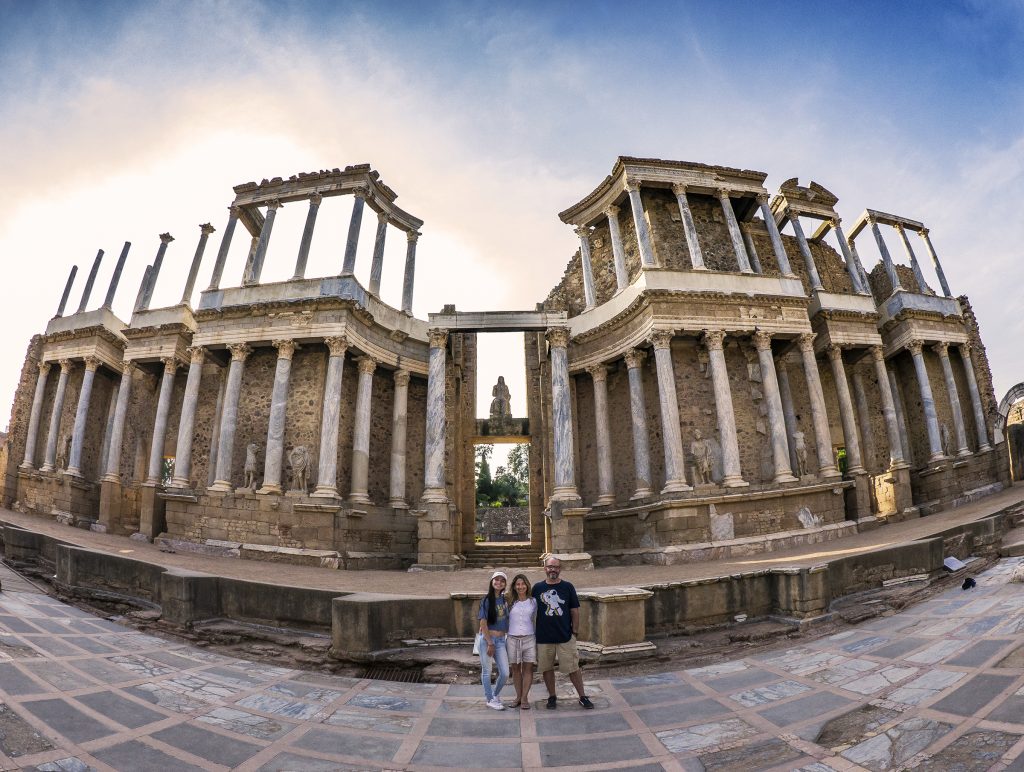 From Guadalupe, we headed south to Mérida (about 90 minutes driving) which was was founded in 25 BC, with the name of Emerita Augusta (meaning the veterans – discharged soldiers – of the army of Augustus, who founded the city; the name Mérida is an evolution of this). There was much to see in Mérida but we only visited the Roman Theater, Europe’s best conserved and the only one which, after being reconditioned, continues to be the setting for theatrical representations and recitals. The theater dates back to 16/15 B.C. and was a nice spot to end our day before heading back to Trujillo. 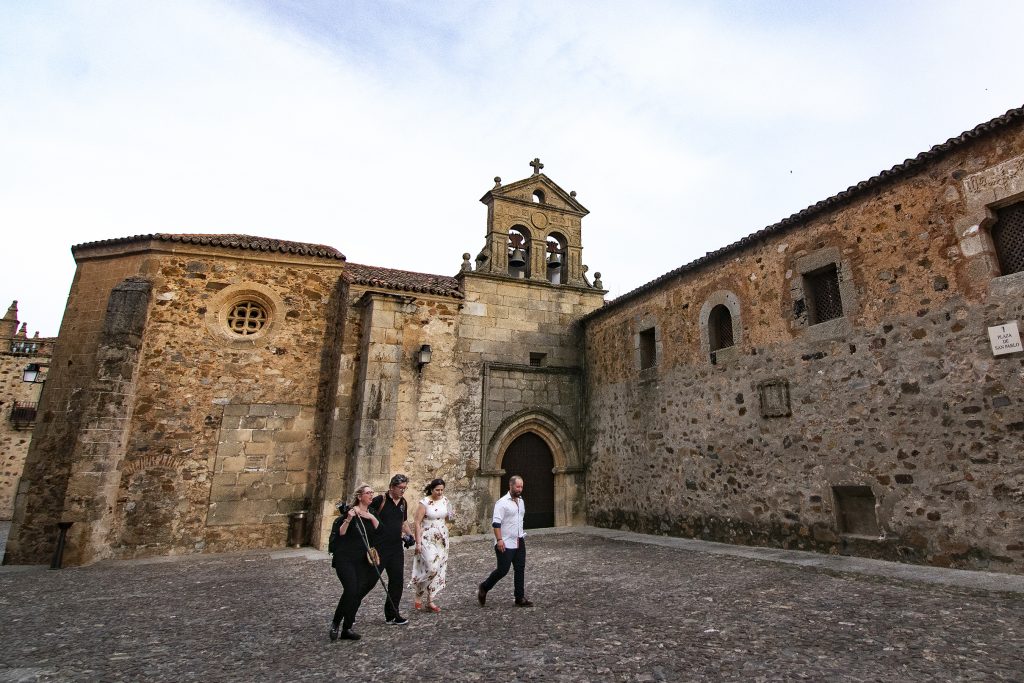 The following day, we waved goodbye to Trujillo and headed to Cáceres (40 minute drive), a city that was founded by the Romans in 25 BC. Cáceres was declared a World Heritage City by UNESCO in 1986 because of the city’s blend of Roman, Moorish, Northern Gothic and Italian Renaissance architecture. Walking the Old Town was one of our trip’s highlights (you can count on more photographs in an upcoming post). Oh, and Casa Don Fernando right in the heart of the plaza is a great place to stay. 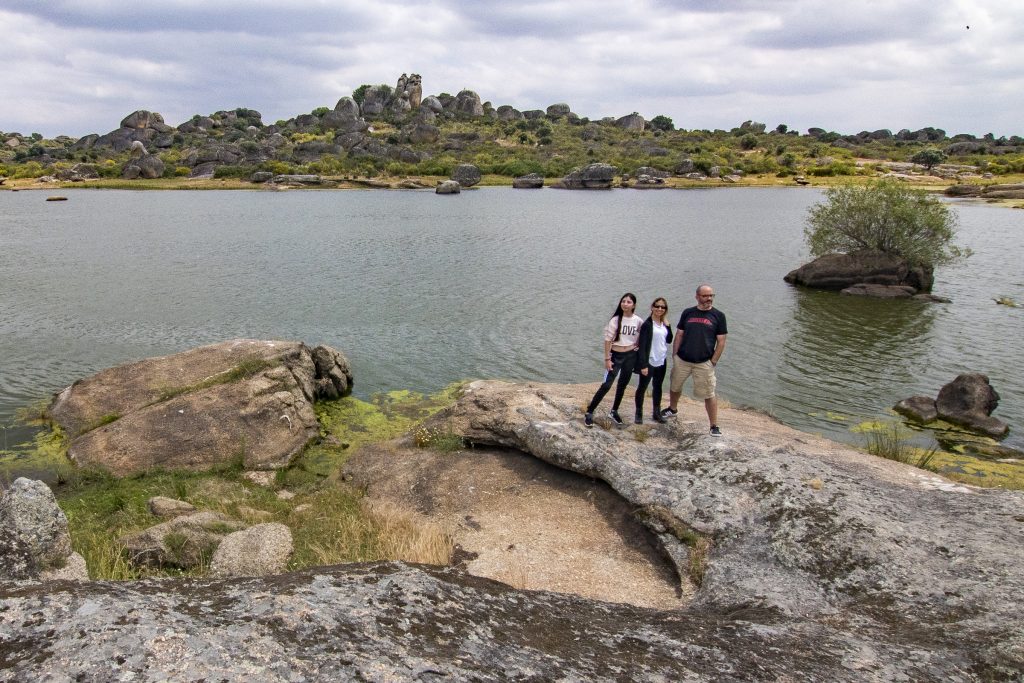 The following day, before the 2 hour and 40 minute drive back to Madrid, we headed 20 minutes west to Los Barruecos, a weird and wonderful slice of nature declared a natural monument by the Board of Extremadura in February of 1996. The unique landscape is adorned with great masses of granite that have been progressively degraded over millions(!) of years to create globular monolithic shapes known as bolos, true sculptures molded by the hand of nature. We weren’t expecting much from our trip here but we ended up spending hours walking and taking pictures. Alas, the quirky Museum Vostell Malpartida which houses works by German artist Wolf Vostell closed at 2:30 on Sunday (the day we visited).

Check out the FULL IMAGE GALLERY OF LOS BARRUECOS HERE

After our five-day stay in Extremadura, we drove back to Madrid and spent our last full day there. Overall, I’m glad I took the time to explore this historic region of Spain. I’d recommend renting a car and driving through this area because the scenery is absolutely breathtaking. And as far as tourists go – the word hasn’t got out yet that this region is so magical so get there before it’s no longer a secret.

Written By DanPerezPhotography On June 12, 2017