As some of you already know by my previous posts, my daughter and I spent a couple of weeks in Spain this past December; an eight-city road trip (armed with the truly remarkable Fujifilm X-T3 and a few really good lenses) that started in Madrid and then continued south through Spain’s Andalucía region and back up north to Galicia. So, after our one day in Madrid (check out the photographs > HERE), our next stop was Córdoba, a city in Andalucía, southern Spain.

Córdoba was a Roman settlement, taken over by the Visigoths (a kingdom that occupied what is now southwestern France and the Iberian Peninsula from the 5th to the 8th centuries), and then taken by Muslim armies in the eighth century. In 1236, Córdoba was returned to Christian rule when it was conquered by King Ferdinand III of Castile during the Reconquista.

We stopped at the Mosque–Cathedral of Córdoba (Mezquita-Catedral de Córdoba), regarded as one of the most accomplished monuments of Moorish architecture (you can view the remarkable images > HERE) and spent our remaining day and a half exploring several other notable attractions in the historic centre of Córdoba, a UNESCO World Heritage Site. And by the way, as of 2018, Córdoba is the first city in the world to have four UNESCO World Heritage Sites, surpassing Rome and Paris.

The Roman bridge of Córdoba is located in the Historic Centre of Córdoba, originally built by the Romans in the early 1st century BC(!) across the Guadalquivir river, though it has been reconstructed at various times since. Most of the present structure dates from the Moorish reconstruction in the 8th century. 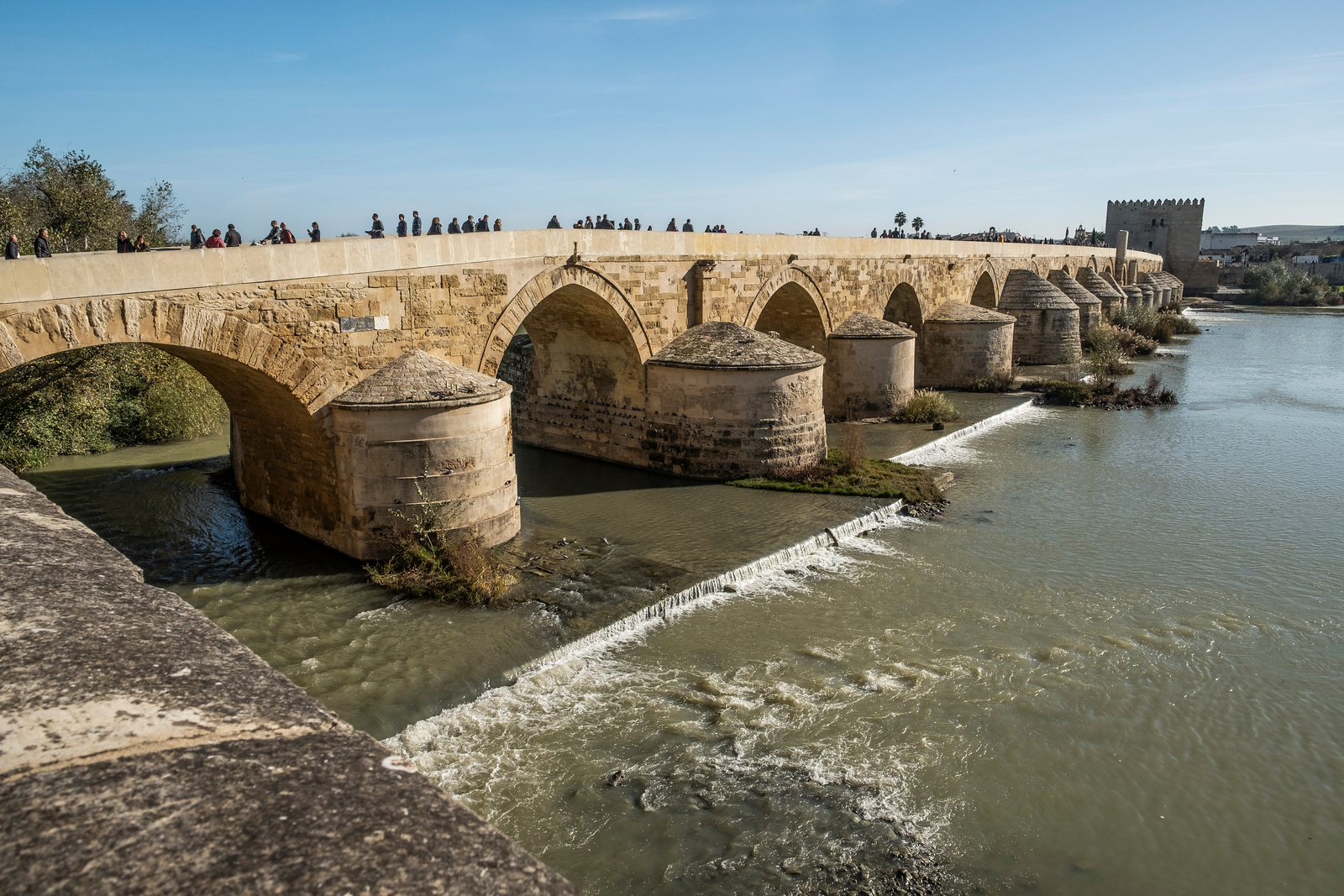 During its history, the bridge was restored and renovated several times (in particular in the 10th century), and now only the 14th and 15th arches (counting from the Puerta del Puente) are original. It was extensively restored in 2006.

The Calahorra Tower, on the bridge’s southern end, was first erected by the Almohad Caliphate to protect the nearby Roman Bridge and dates back to the 12th century. 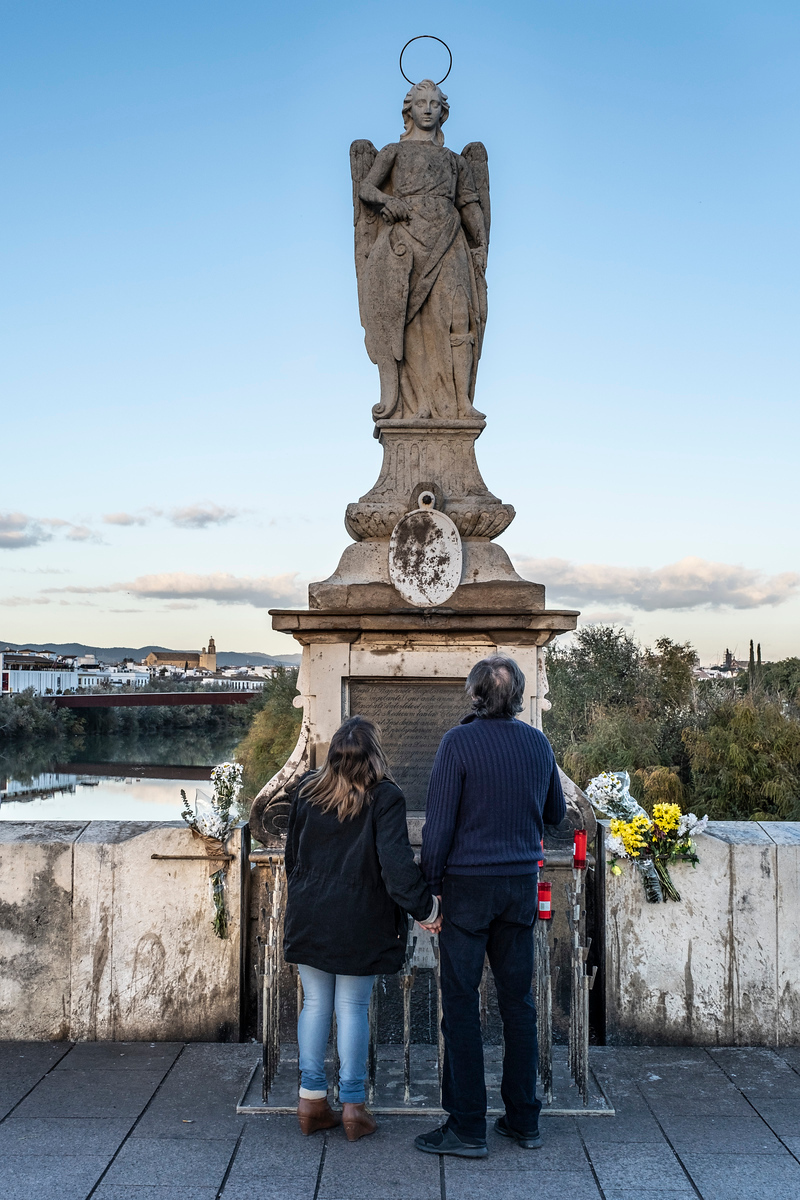 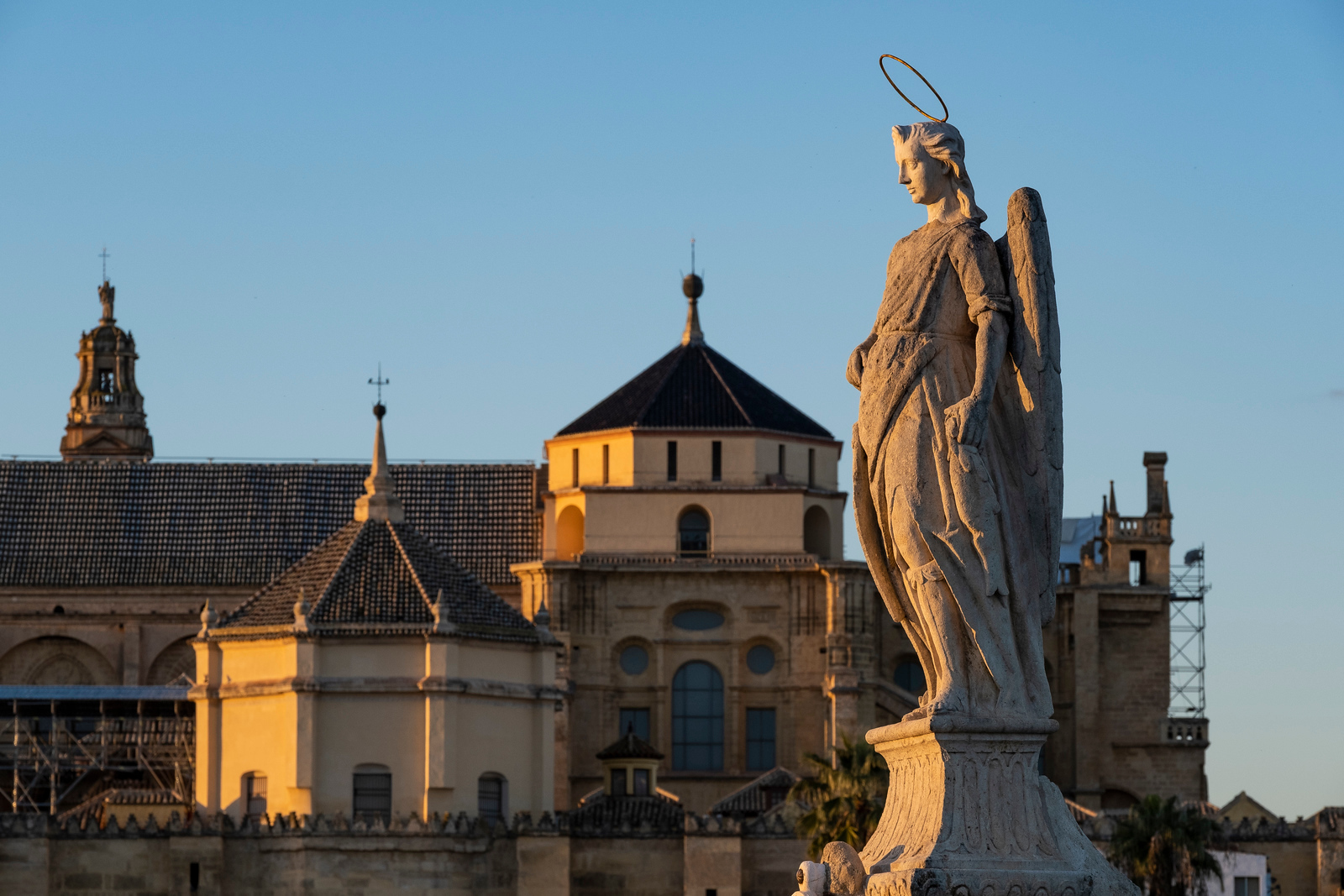 In the 17th century, a sculpture depicting St. Raphael was put in the middle of the bridge, executed by Bernabé Gómez del Río. 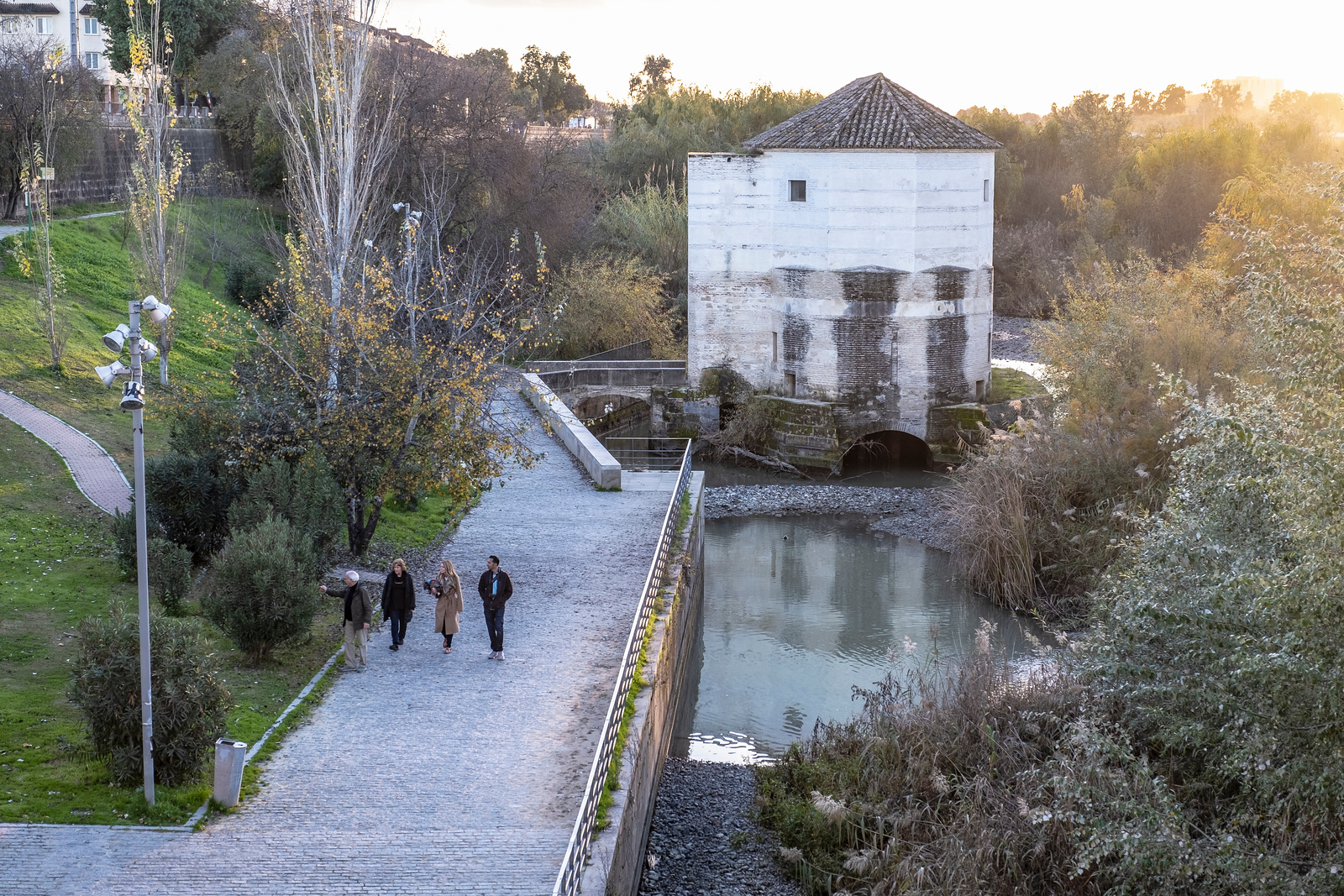 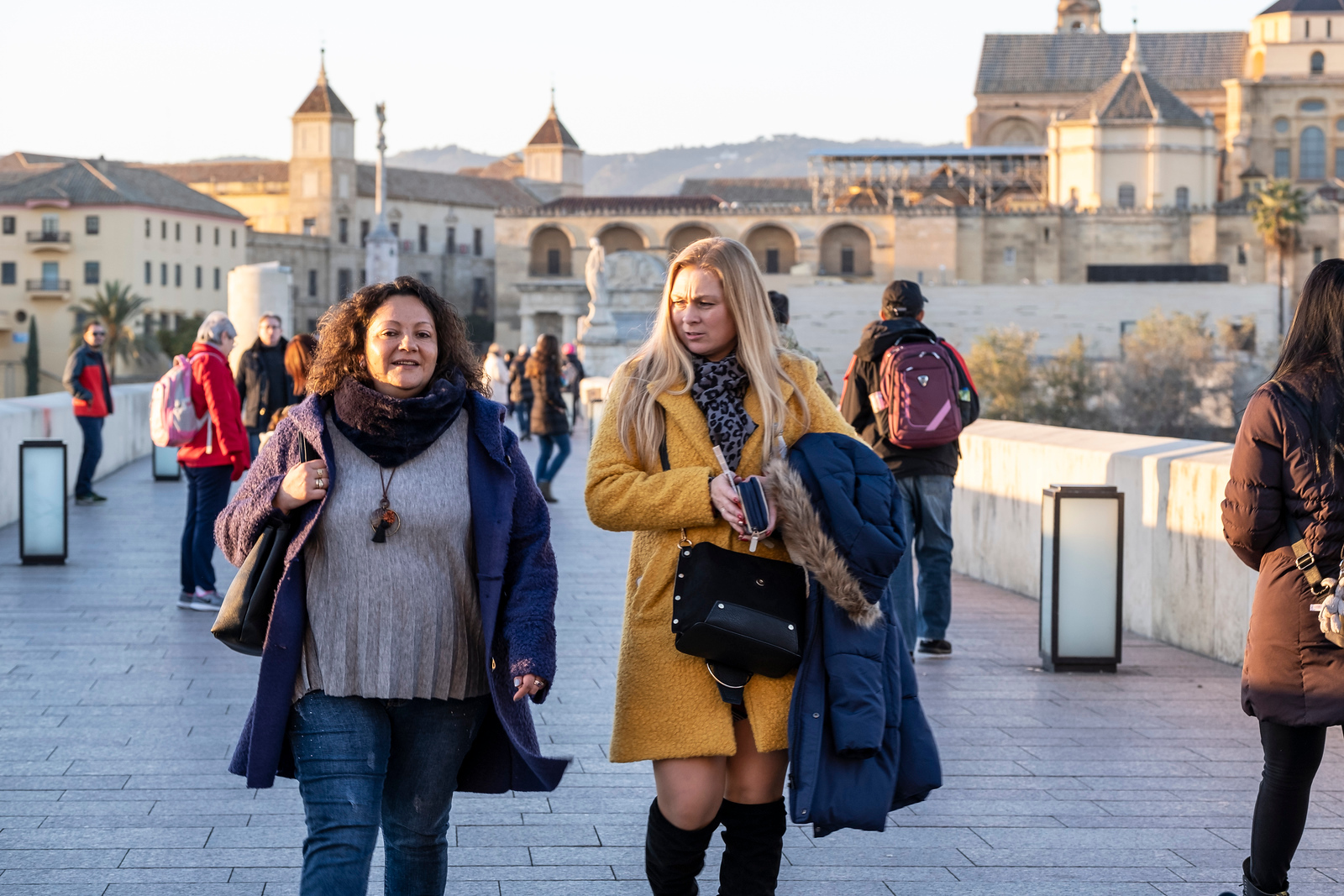 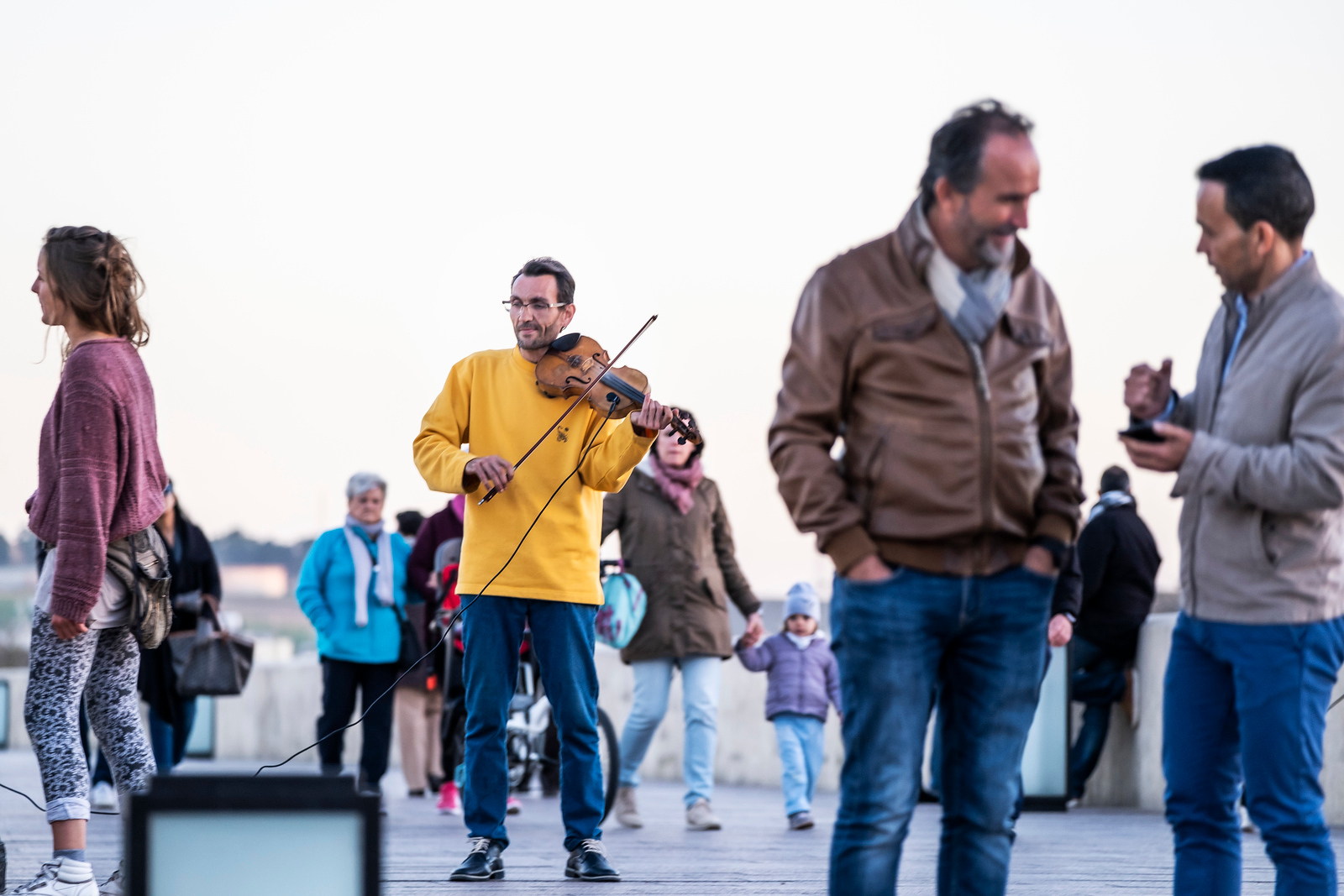 Images from the Roman Bridge…

In the sixteenth century, the authorities of Córdoba decided to improve the condition of the entrance to the city due to the deteriorated state of the existing gate. With this goal in mind, on February 18, 1572, mayor Alonso Gonzalez de Arteaga issued the order to build the Puerta del Puente (Bridge Gate).

Córdoba’s old Jewish quarter consists of a fascinating network of narrow lanes in which the Jews lived between the 10th and 15th centuries. During the 10th century, Córdoba was the largest economic and cultural centre of the Western world and an example of coexistence between different cultures, Jewish people, Christians and Muslims. In 1492, as a part of their consolidation of power over a newly unified Spain, King Ferdinand III and Queen Isabel presented the Jews with the choice of forced conversion or exile, causing the mass emigration of the Sephardic Jews from all over Spain… 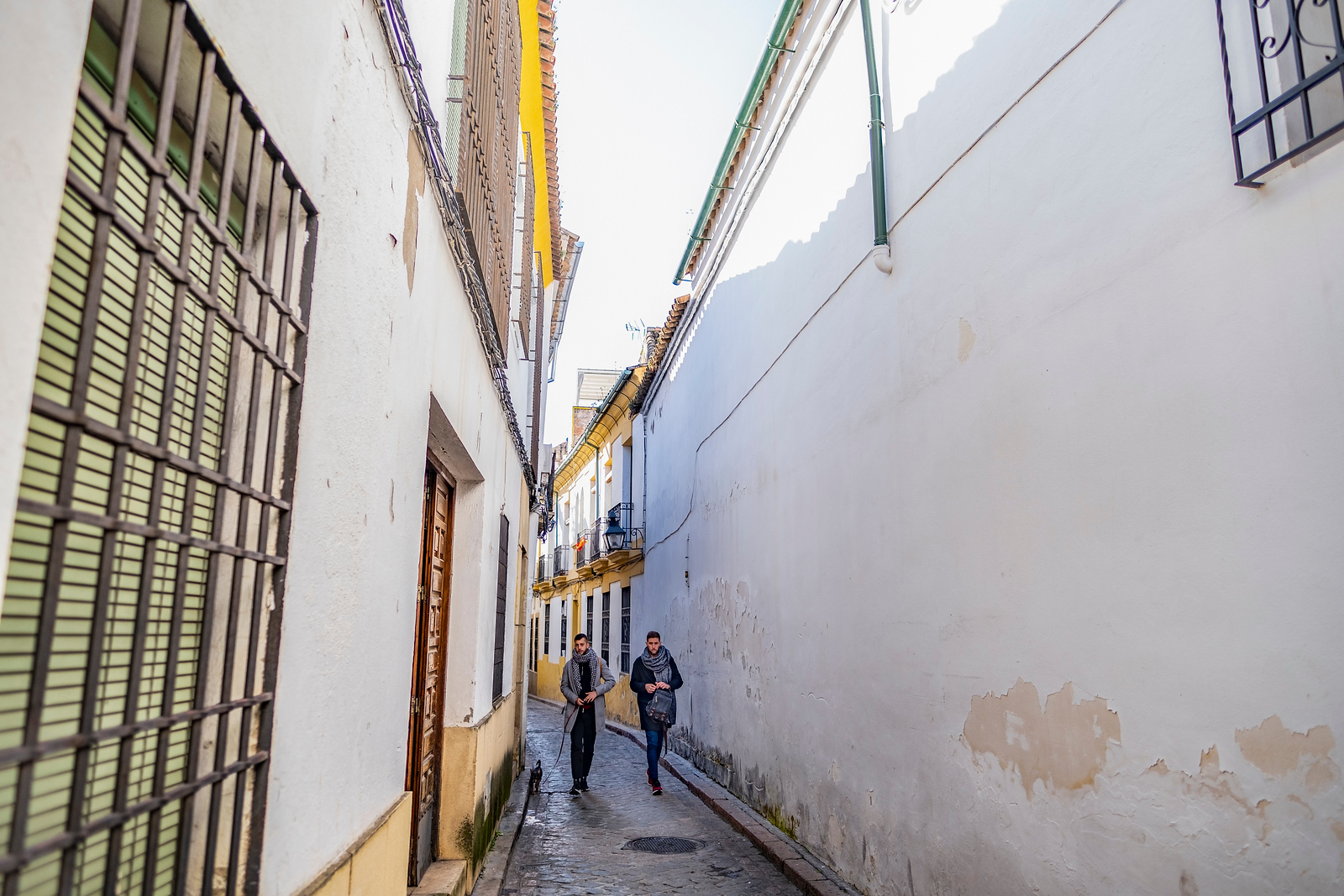 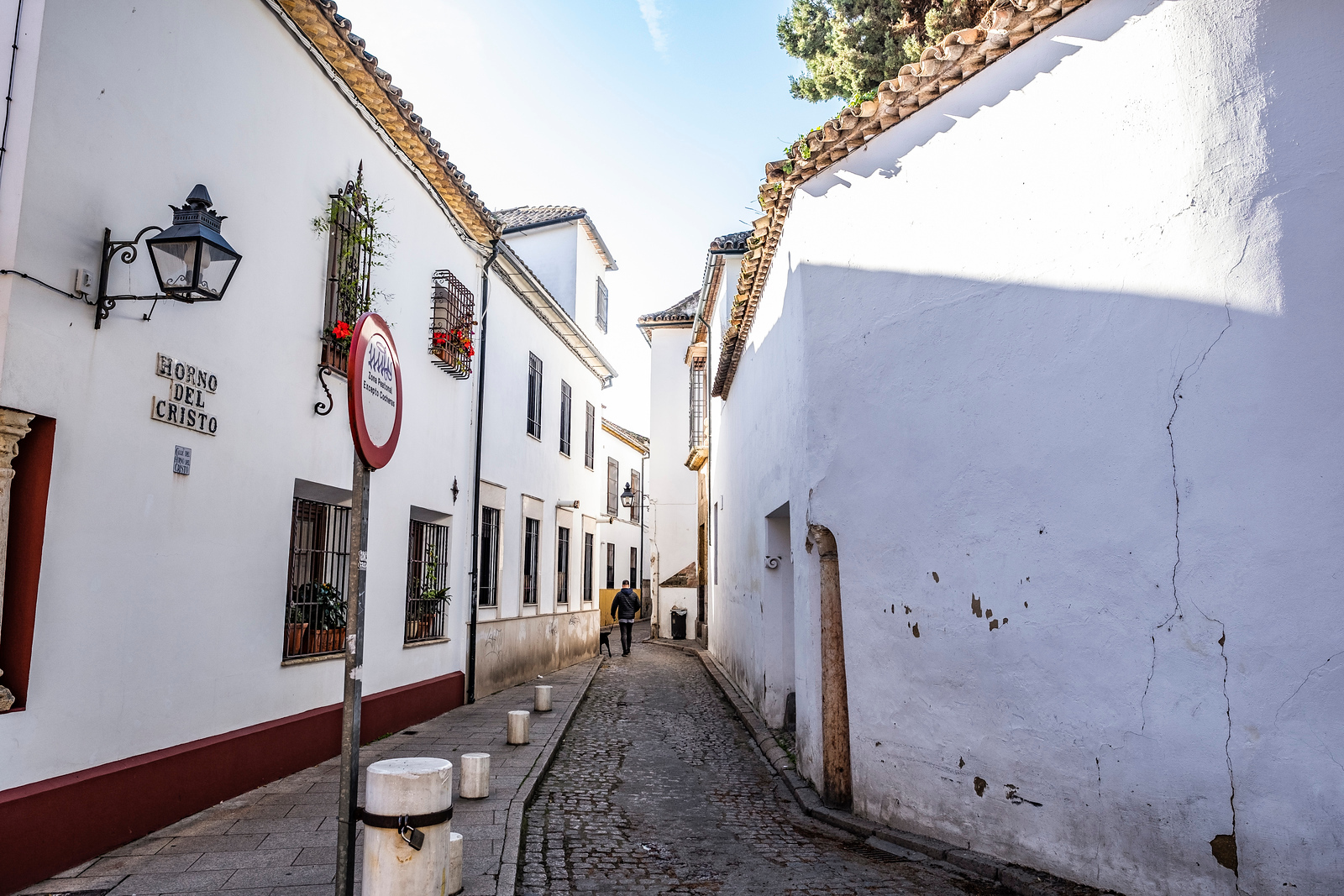 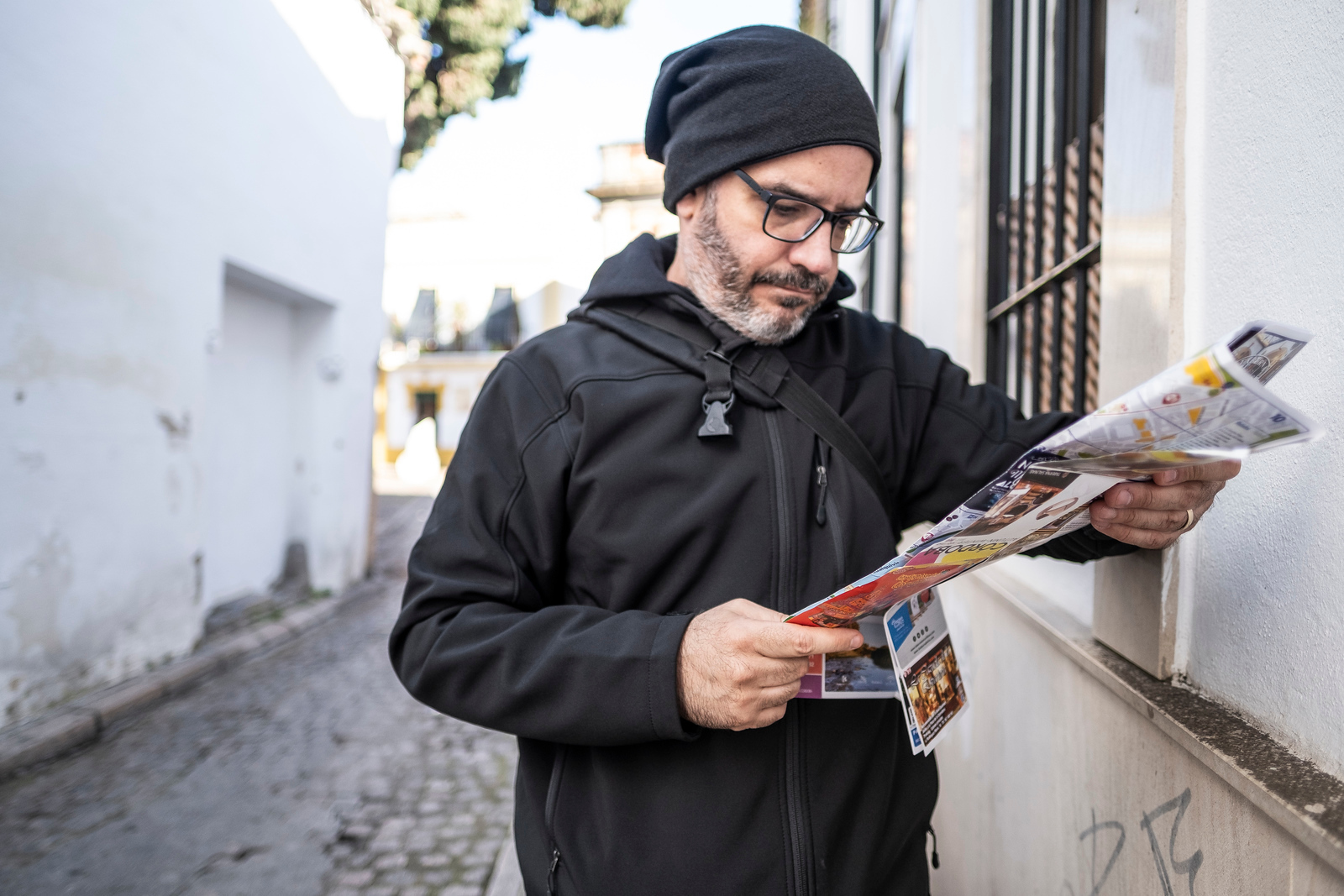 Without a guide (and a map I couldn’t quite figure out), we walked around the quarter for a bit until I found what I was looking for – Calleja de las Flores… 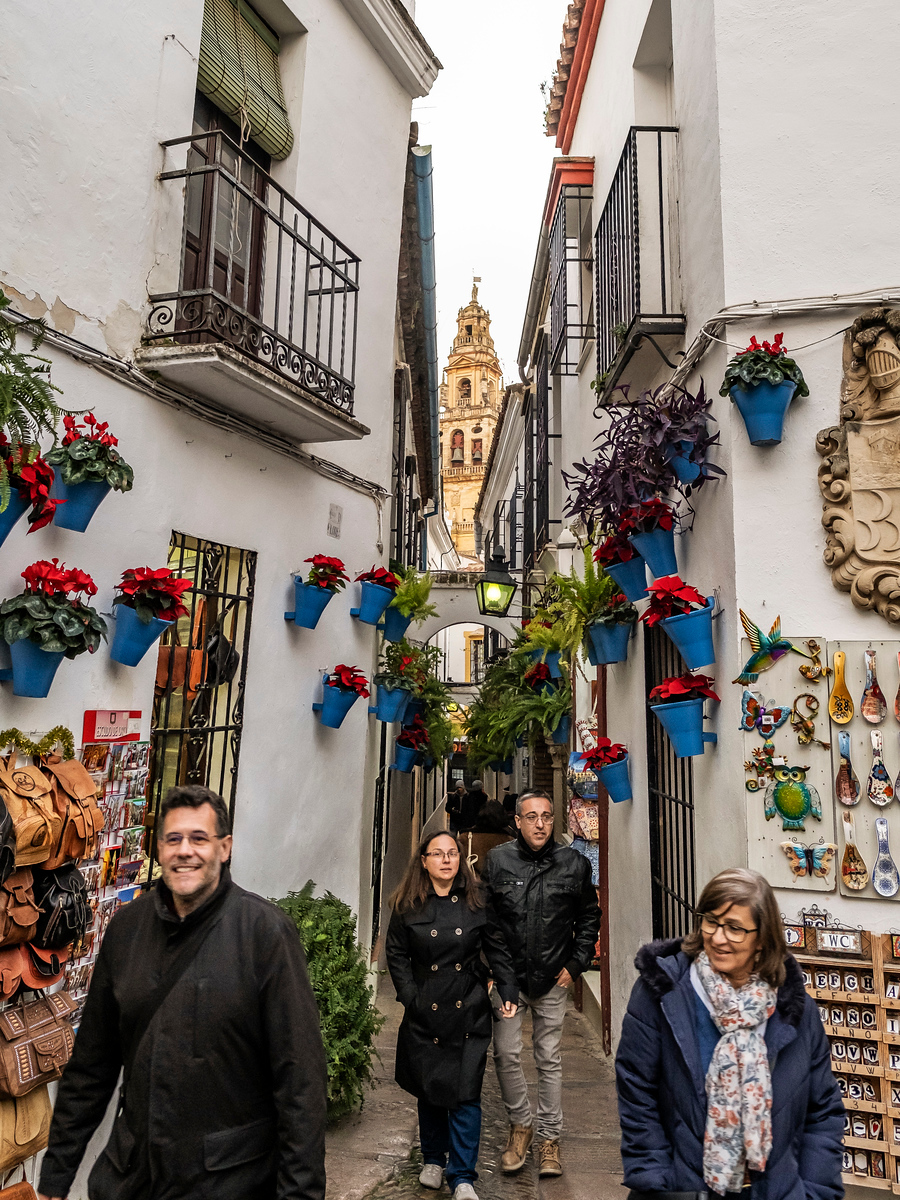 Located in Cordoba’s Jewish Quarter, Calleja de las Flores encapsulates the charm and beauty of the classic Andalusian alley. Walled with timeless whitewashed houses and adorned with colorful potted plants, this little alley is a charming place to take in some of Córdoba’s charisma. 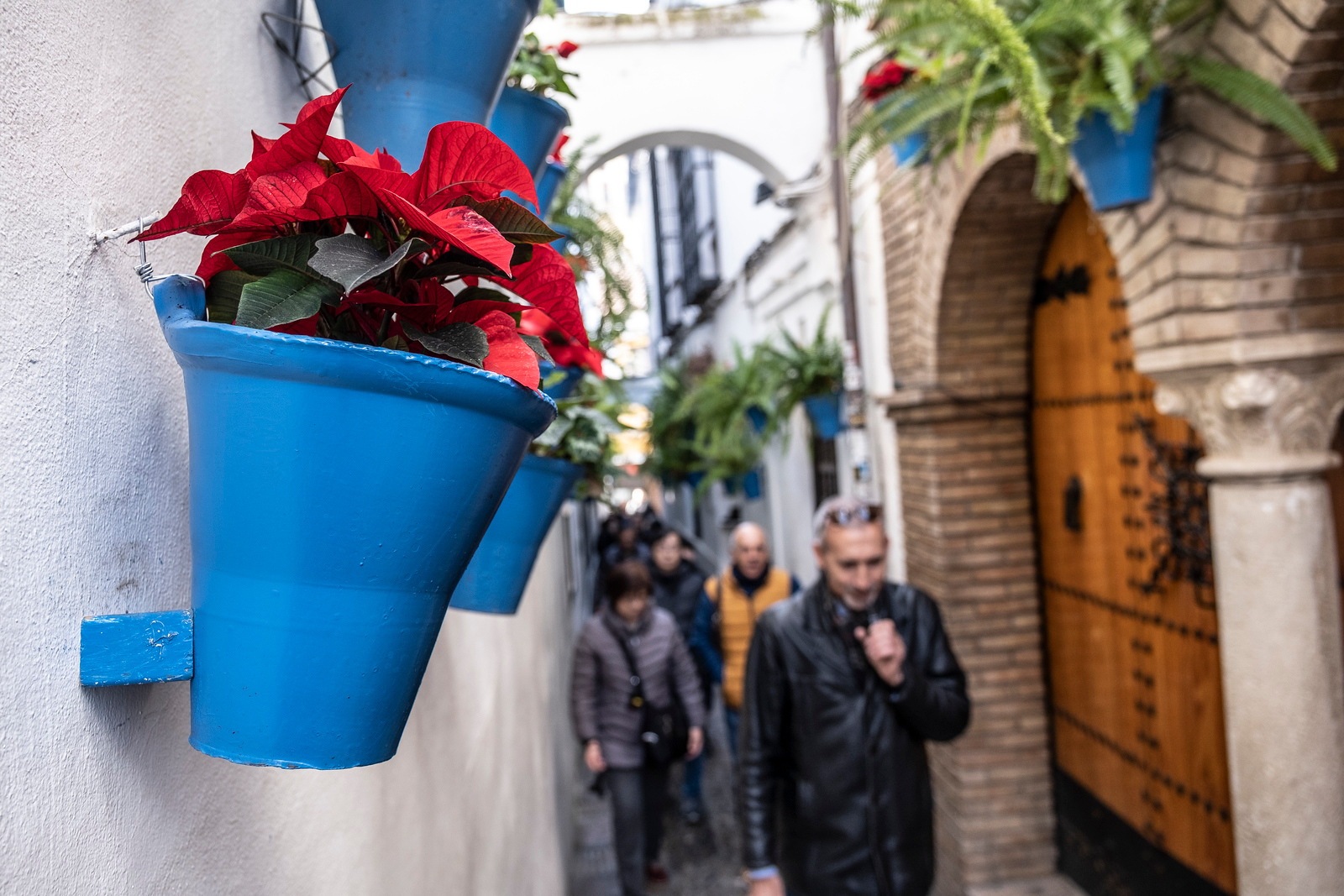 That night, we took in a flamenco show at Arte y Sabores de Córdoba, located in the heart of the Jewish Quarter. The small, intimate venue is located within the Arab baths of Santa María dating over one thousand years. The former sauna room of the baths has been carefully restored to hold the flamenco performances. In this very dimly lit tablao, the capabilities of the Fujifilm X-T3 really shined (especially its autofocus system’s 425 PDAF sensors that cover the entire frame). And the 16mm f/1.4 lens? Luscious. 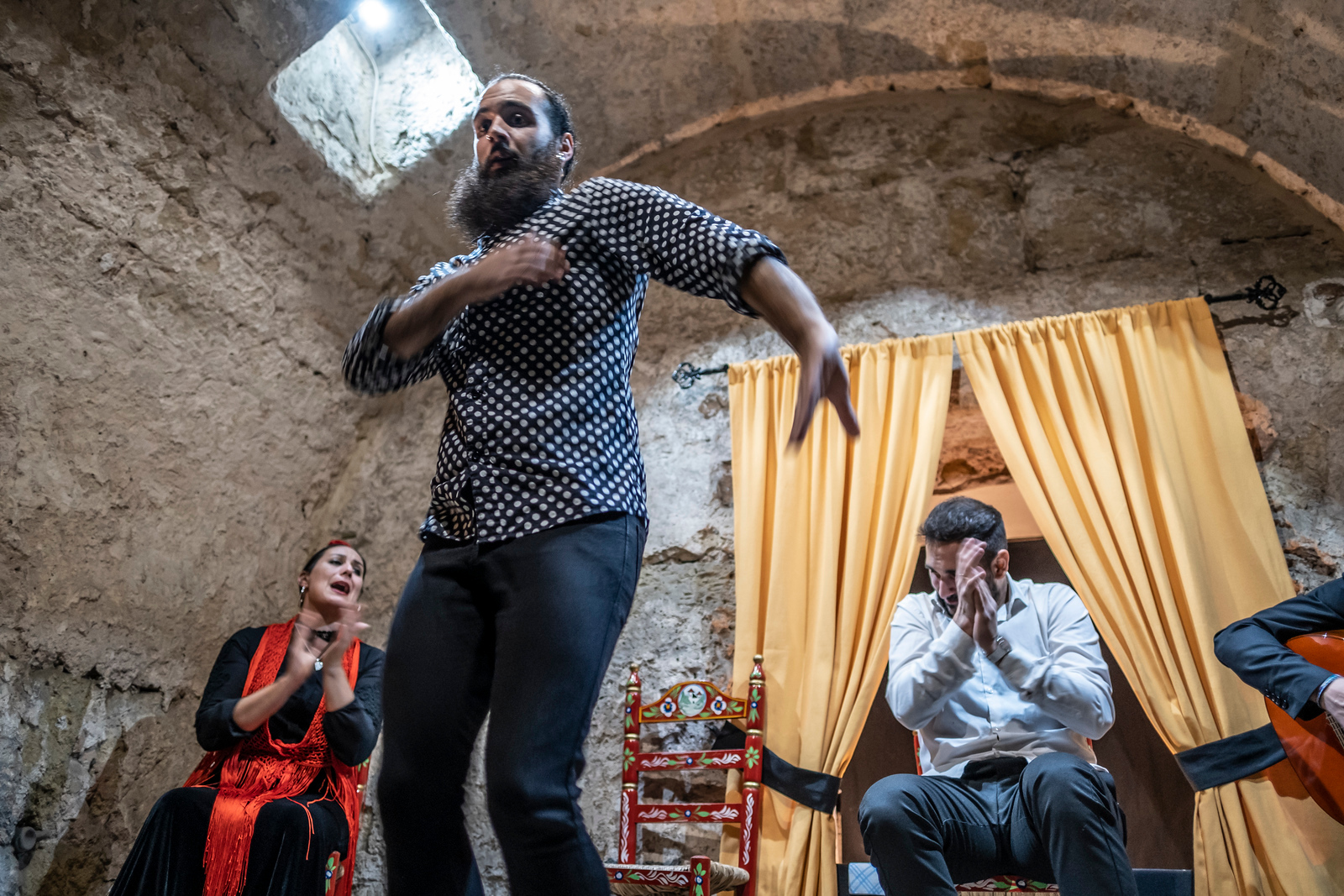 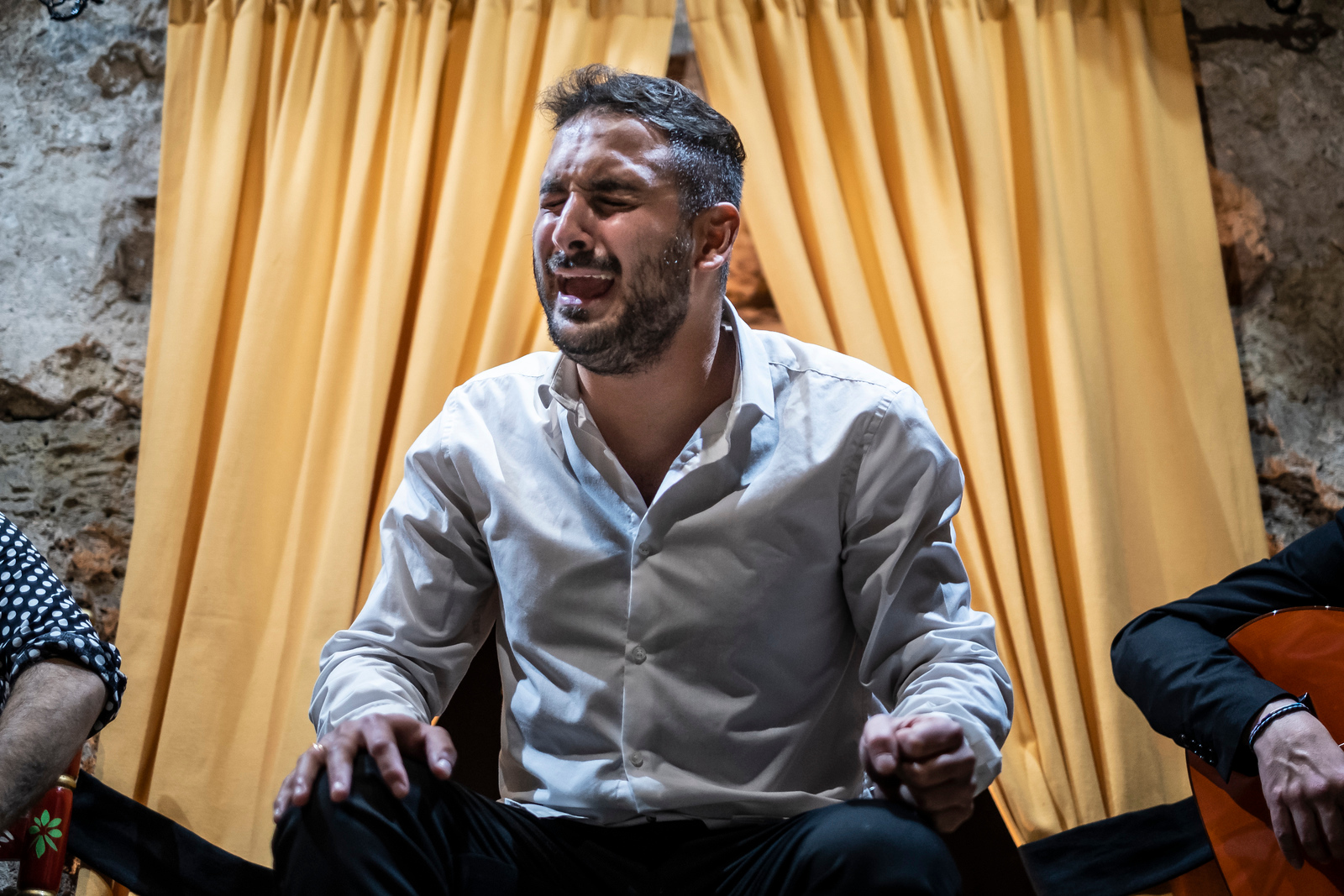 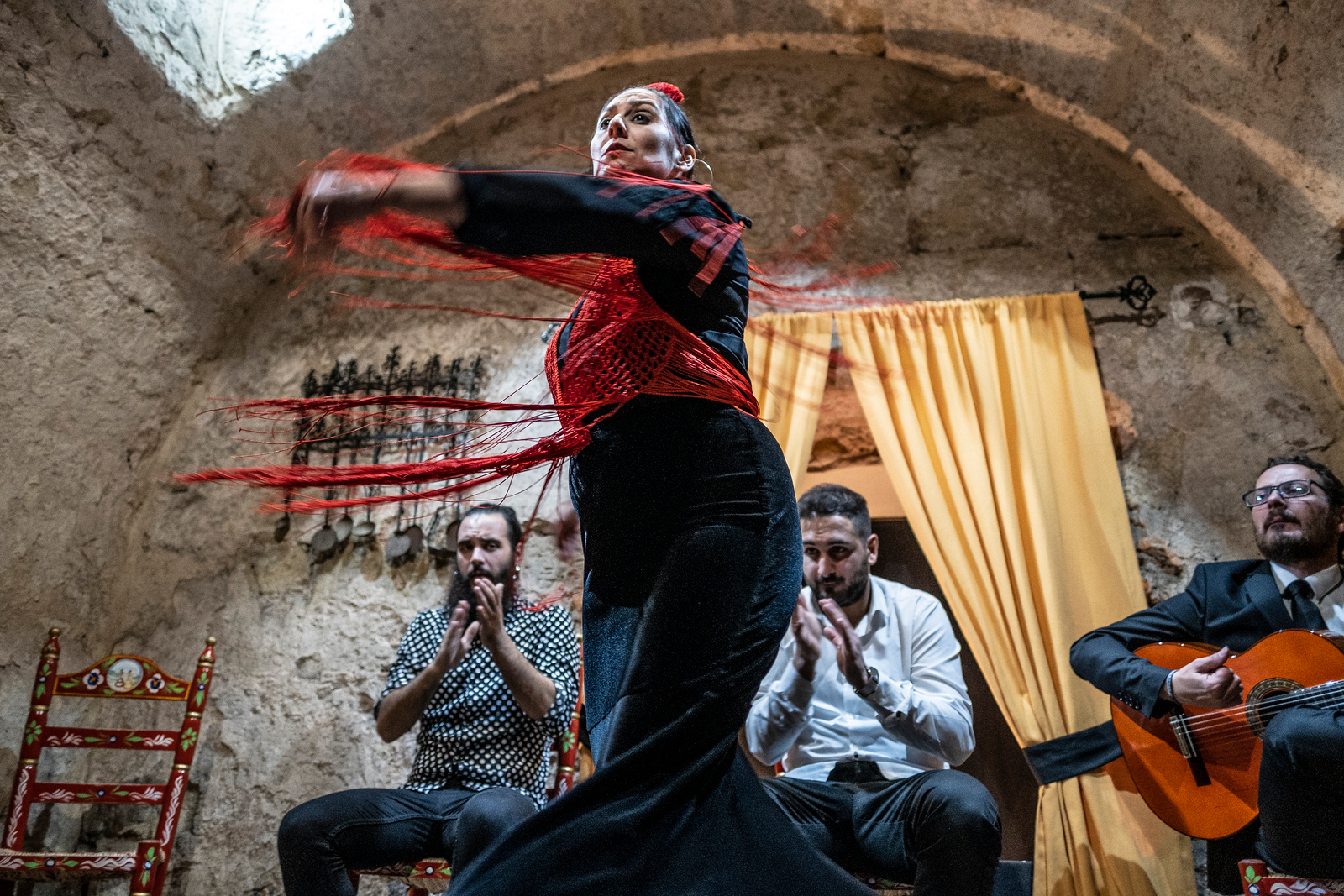 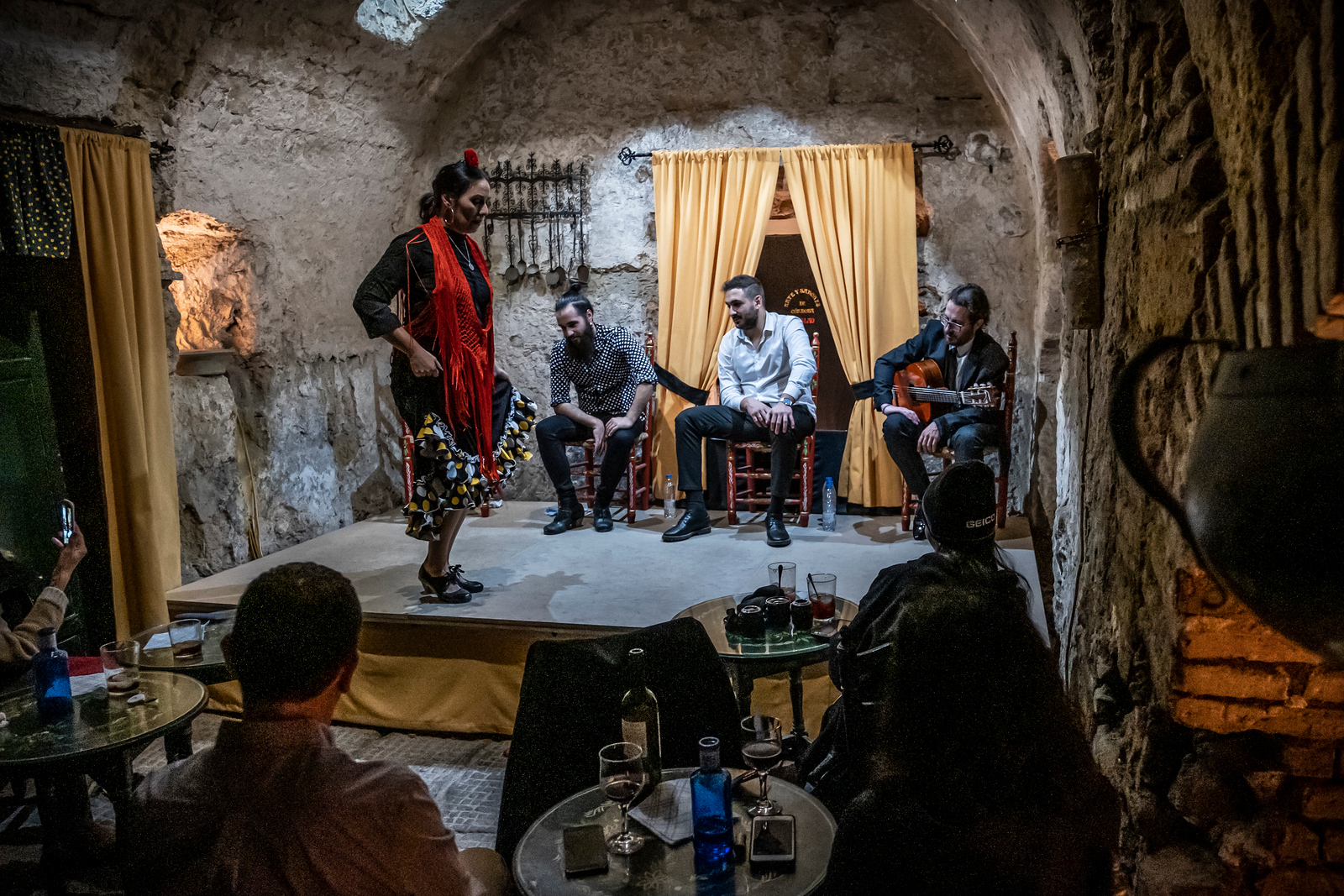 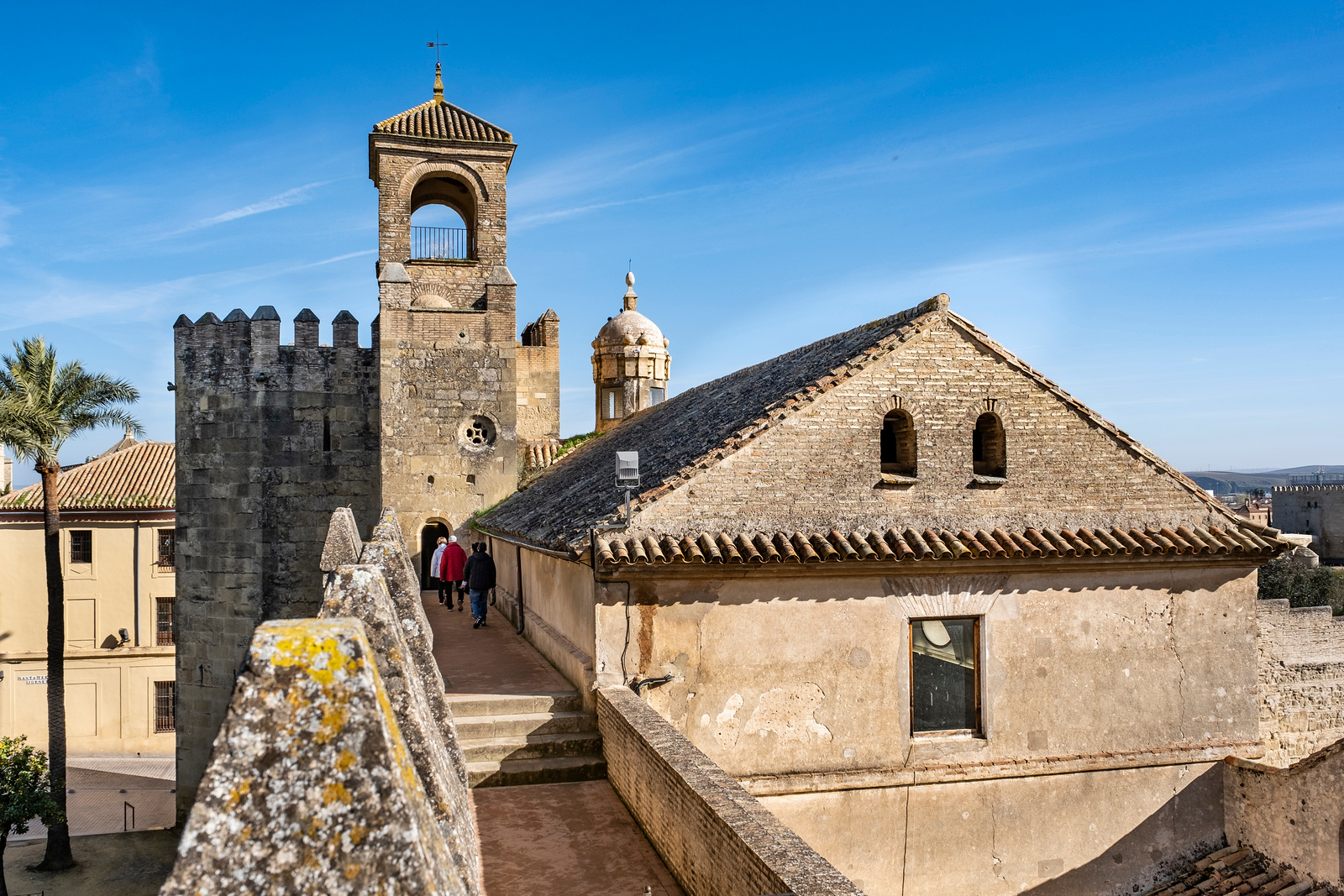 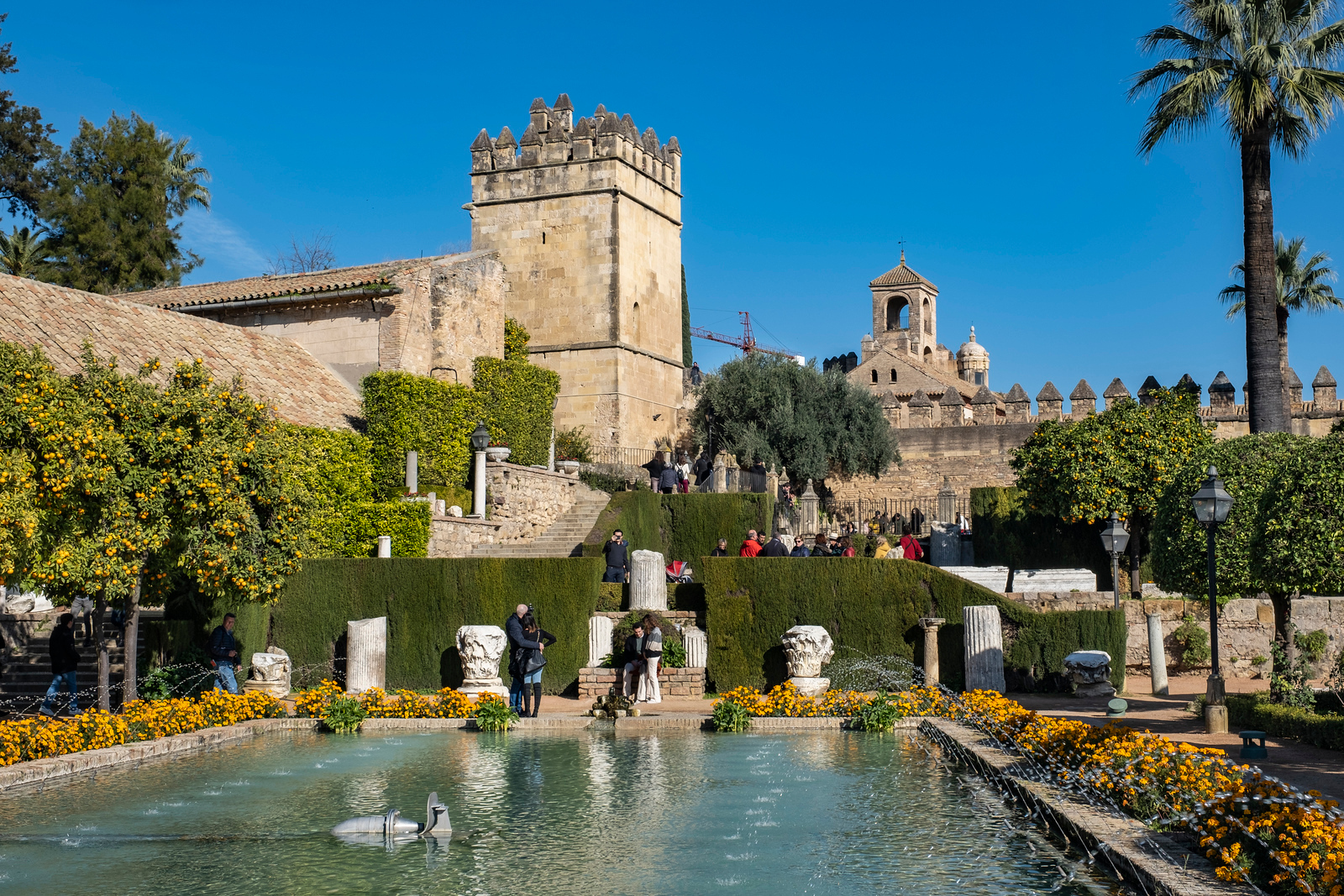 The next day, we visited the Alcázar de los Reyes Cristianos (“Castle of the Christian Monarchs”), also known as the Alcázar of Córdoba, a medieval alcázar (a type of Moorish castle or palace in Spain and Portugal built during Muslim rule) located in the historic centre of Córdoba. It is a building of military character whose construction was ordered by the King Alfonso XI of Castile in the year 1328 and forms part of the Historic Center of Córdoba that was declared part of World Heritage by UNESCO in 1994… 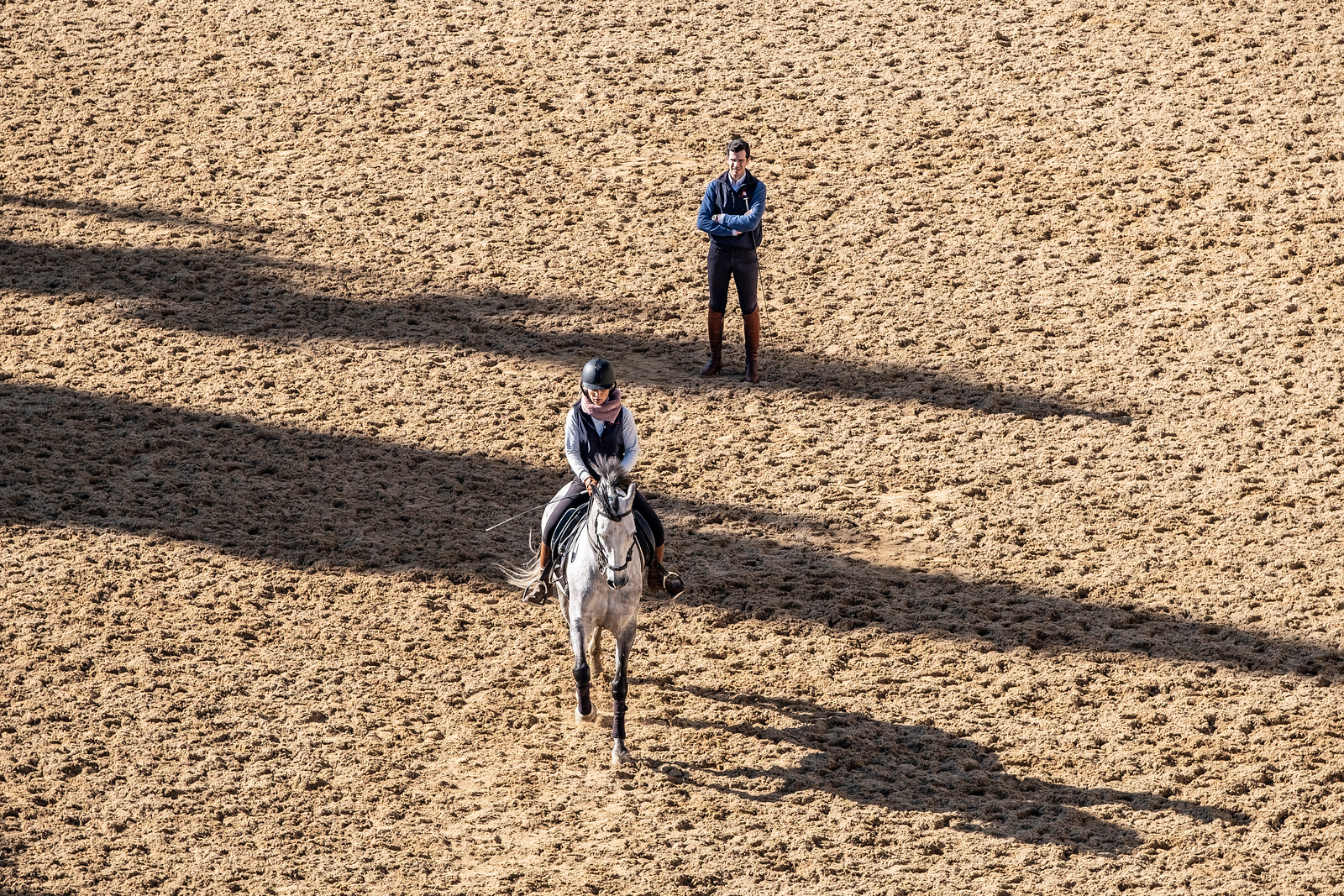 From atop the castle, we could see the Royal Stables of Córdoba, which were founded through a decree by King Ferdinand II (1556-1598) in 1570 with the objective of breeding Spanish thoroughbred horses at the service of the Spanish Monarchy. 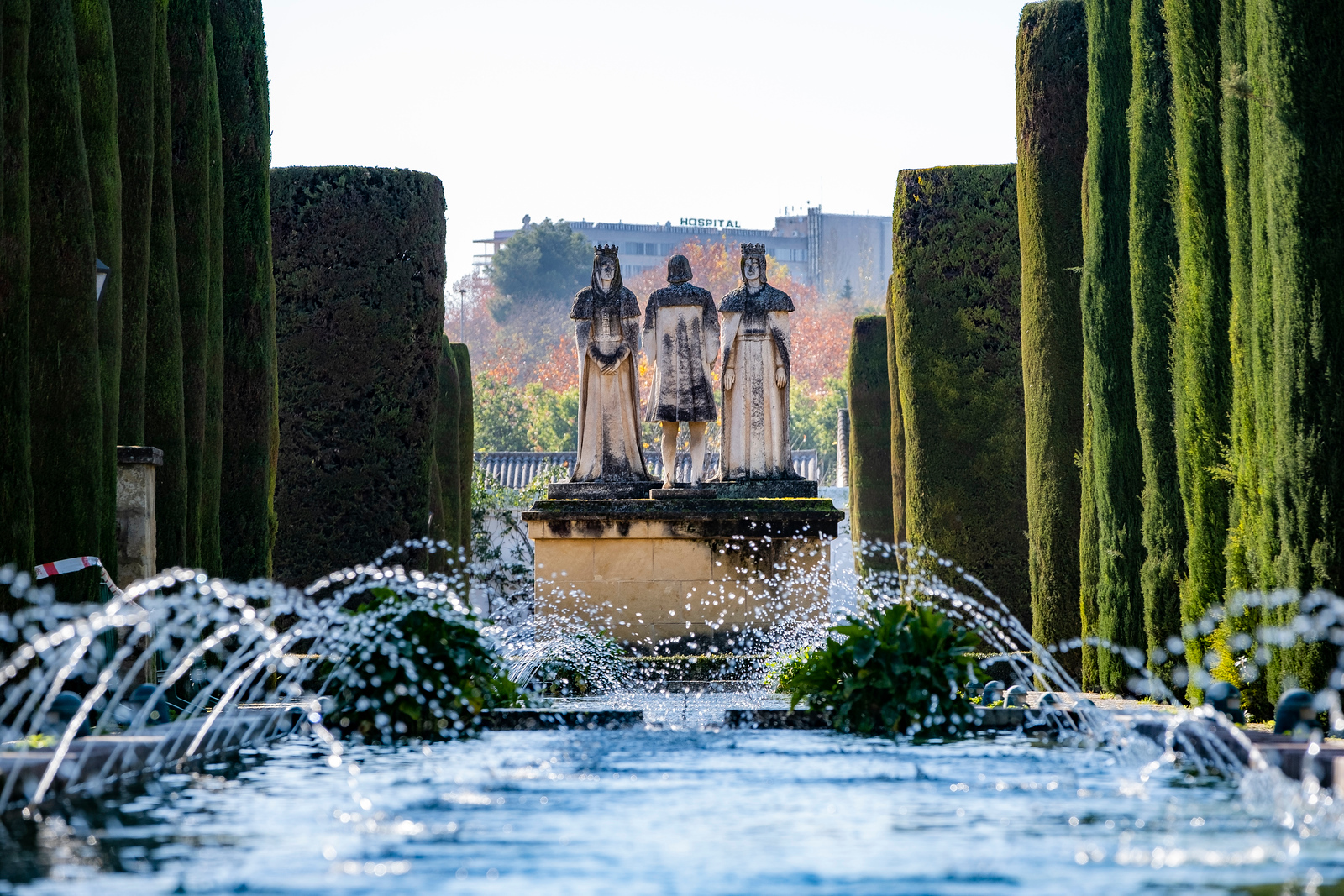 The King’s walk (El paseo de los reyes) is bordered by a line of cylindrical cypress trees and is also divided into two paths by two narrow ponds. On this walk, there are several sculptures of the Kings who built the Alcázar, which are located on pedestals aligned between the hedges.

Time to move on… 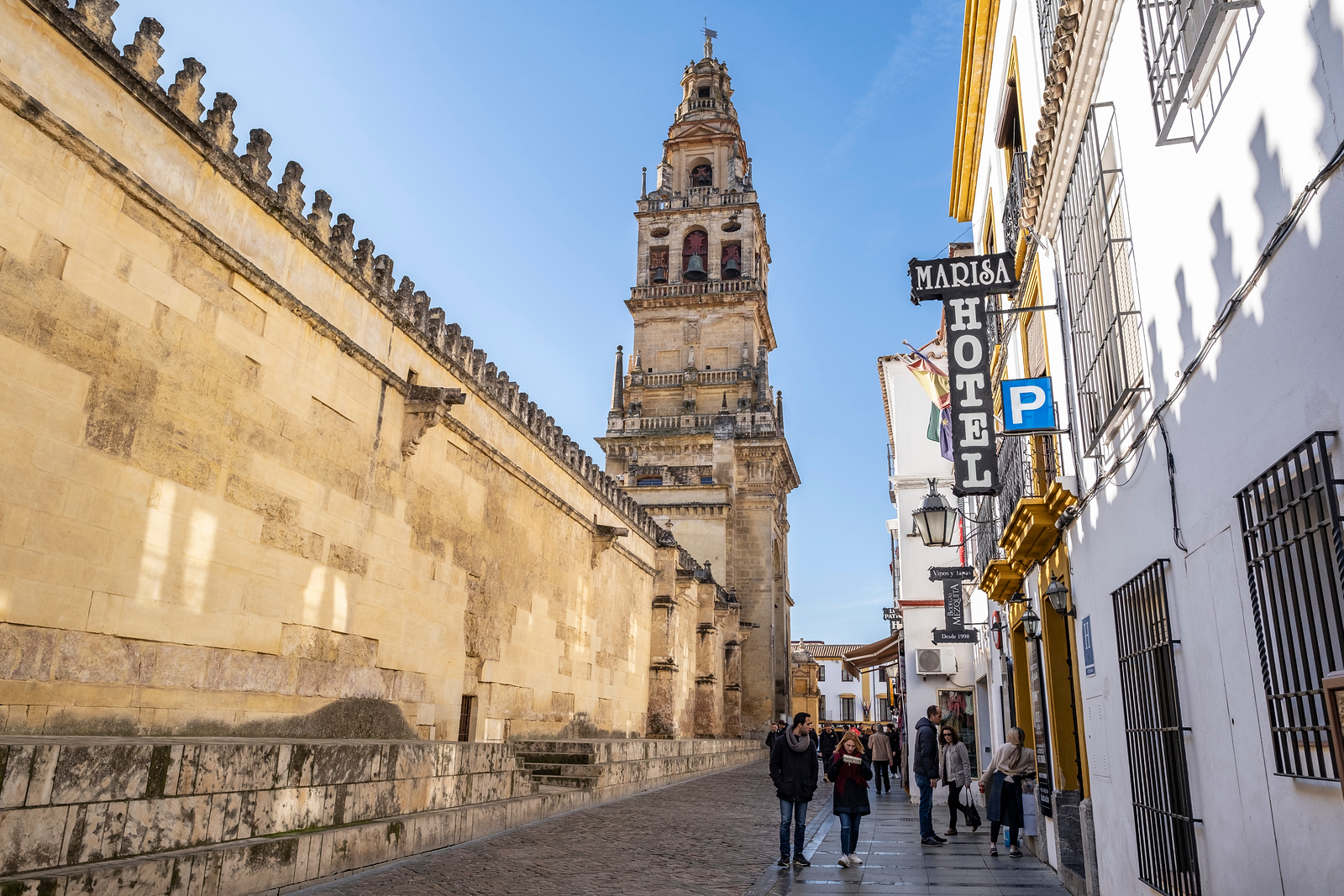 As we walked past the bell tower of the Mosque–Cathedral of Córdoba back to our hotel (the Eurostars Conquistador – a lovely hotel located right in the heart of Córdoba’s Old Town), it was time to pack up, hop in our car and head south to our next destination, Gibraltar. Wish we had more time to spend in Córdoba, it is an absolutely charming city. And if you’re having second thoughts about visiting Spain in December, don’t. It’s lovely. Few tourists around and weather that hit the low-to-mid 60’s during the day and mid 40’s at night. Nothing a good jacket and scarf couldn’t handle. 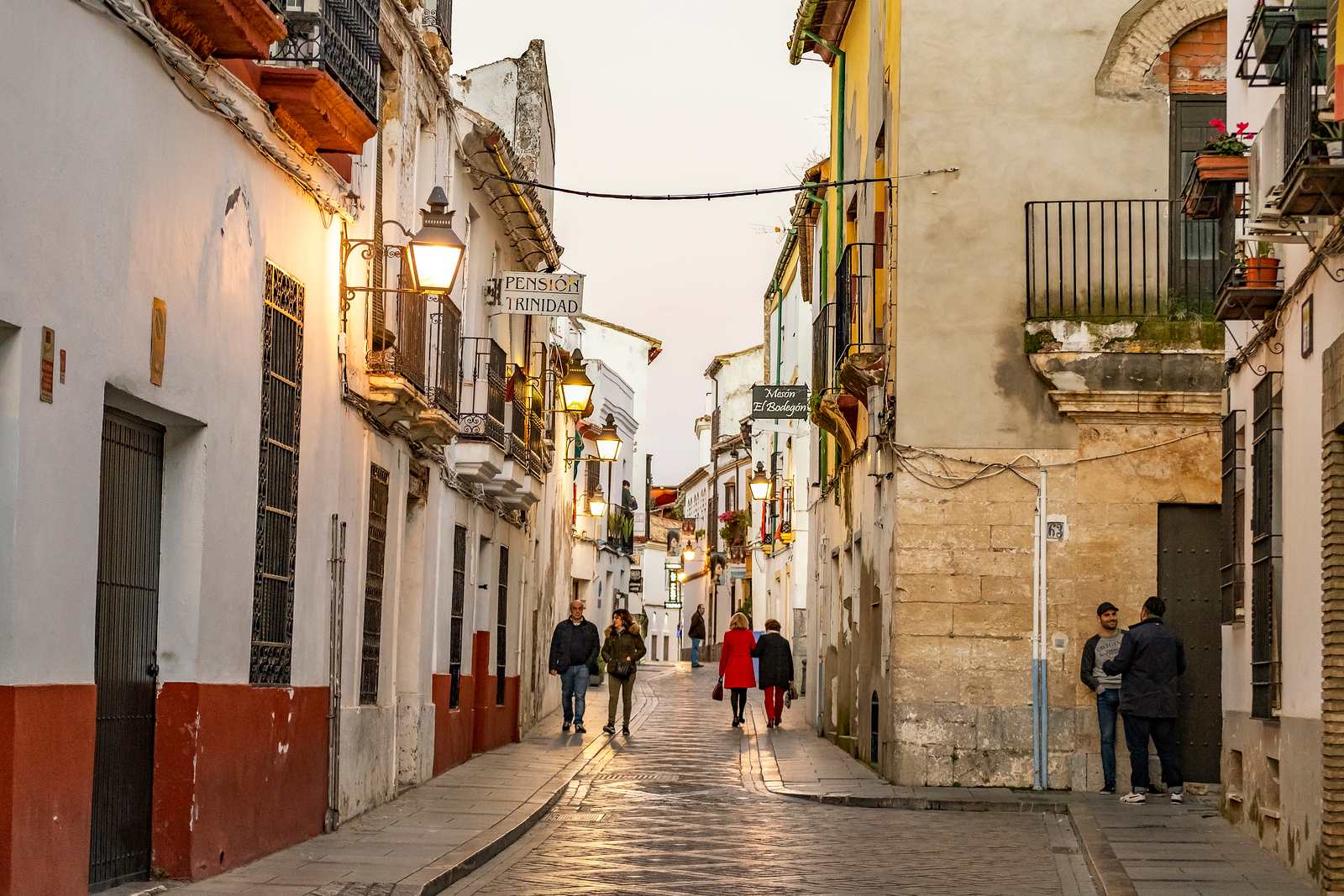 Stay tuned for my next post as our next stop is the beautiful city of Seville. Scroll down the page and subscribe so you won’t miss an upcoming post. All the cool kids are doing it. You won’t be sorry. Promise.

***The full set of images from Córdoba are available for purchase (prints, wall art, desk art, phone cases, etc) on my SmugMug site***

Special thanks to the folks at Fujifilm for the great rental price on the Fujifilm X-T3. This is a wonderful camera for traveling. Light, comfortable to hold, great in low light and a snappy autofocus. Besides the camera, I had the 16-55 f/2.8, 56mm f/1.2, 16mm f/1.4, and 50-140mm f/2.8 lenses. Also grateful for my Lowepro SlingShot 102 Camera Bag which has been my faithful companion for the past 7+ years, and the Joby GorillaPod 3K Flexible Mini-Tripod. I also gotta tip my hat to my KEEN® shoes (I have the Finlay Oxfords). I mean, walking on cobblestone streets all day is tough on your feet. I had brought along a pair of Skechers Memory Foam Shoes as well as my adidas Cloudfoam sneakers. Neither of them even came close to my KEEN® shoes as far as comfort. If you plan to walk around Europe’s rough cobblestone streets, these rugged shoes won’t let you down. Nuff said.

Written By DanPerezPhotography On February 20, 2019

Our December Trip To Spain: The Beautiful City of Seville