Our December Trip To Spain: The Beautiful City of Seville

OK, so if you’ve been following this blog (and why wouldn’t you be? SUBSCRIBE HERE), you’d know that my wife Madelyn passed away back in September due to complications from surgery to remove a tumor from her brain (yeah, that sucked). You’d also know that the last thing my daughter and I were going to do for our first Christmas without her was to be home alone. And you’d also know that we decided to embark on an eight-city driving tour of Spain this past December that started in Madrid and would take us south to the charming city of Córdoba (check out the photographs HERE and images from the stunning Mosque-Cathedral HERE), then further south to Gibraltar, back NW a bit to the coastal city of Cádiz and Jerez de la Frontera (check out the photographs HERE).

Our next stop would be Seville, the capital and largest city of the autonomous community of Andalucía in Spain’s southern coast. It’s the fourth-largest city in Spain and the 30th most populous municipality in the European Union. Seville was founded as the Roman city of Hispalis. It later became known as Ishbiliyya (huh?) after the Muslim conquest in 712 until finally being incorporated into the Christian Kingdom of Castile under Ferdinand III in 1248.

After the discovery of the Americas in 1492, Seville became one of the economic centers of the Spanish Empire due to its being the only port awarded the royal monopoly for trade with the growing Spanish colonies in the Americas. Merchants from Europe and other trade centers needed to go to Seville to acquire New World trade goods. The city’s population grew to more than a hundred thousand people. In the late 16th century the monopoly was broken, with the port of Cádiz also authorised as a port of trade. The Great Plague of Seville in 1649 (a massive outbreak of disease in Spain that killed up to a quarter of Seville’s population) reduced the population by almost half and by the 18th century, its international importance was in decline and it would not recover until the early 19th century.

In 1992, Seville played host to the Expo ’92 international exhibition (organized to celebrate the 500th anniversary of the “discovery” of the Americas by Christopher Columbus) which spurred the construction of a new airport, a new train station, a bullet train link to Madrid, new bridges and improvements to the main boulevards. Seville has built on its tourism industry ever since with over two million tourists visiting the Province each year.

Seville, however, is often overshadowed by the more cosmopolitan cities of Madrid and Barcelona but we found Seville to be an absolutely beautiful city. We spent two and a half days there (the longest stay at any city in our eight-city tour) and wished I’d allowed for another few days. Moreover, December is an ideal time to visit Seville. Christmas lights, minimal tourists, and sweater weather during the day (our last day there, we were walking around in our t-shirts), light jackets at night. If you’re thinking of visiting during the summer, Seville is the hottest major metropolitan area in the geographical Southwestern Europe, with summer average high temperatures of above 95 °F (nothing we ain’t used to living in South Florida).

Where did we stay, you ask? We stood at the lovely Hotel Bécquer on Calle Reyes Católicos in the heart of Seville’s old town and were a short walking distance to all attractions – highly recommended.

Lastly, I wanted to ensure that for this particular trip, my travel photographs would be even more awesome than usual (yes, I’m my biggest fan) so I rented the new Fujifilm X-T3 and a few good lenses. Nothing against my faithful Lumix GH4 but the buzz on this camera (released in September of 2018) was more than I could resist. I’ll shut up now and let the photographs speak for themselves. Enjoy…

Really wish I had allowed for more time in Seville, just walking around this city was magical…

After a long day of walking, we took a short taxi ride back to our hotel. Our cabdriver’s motivation (inspiration) was posted on his dashboard…

Took in a sizzling flamenco show at Casa de la Memoria. Alas, they didn’t allow photographs until the very end so this was the best I could do… 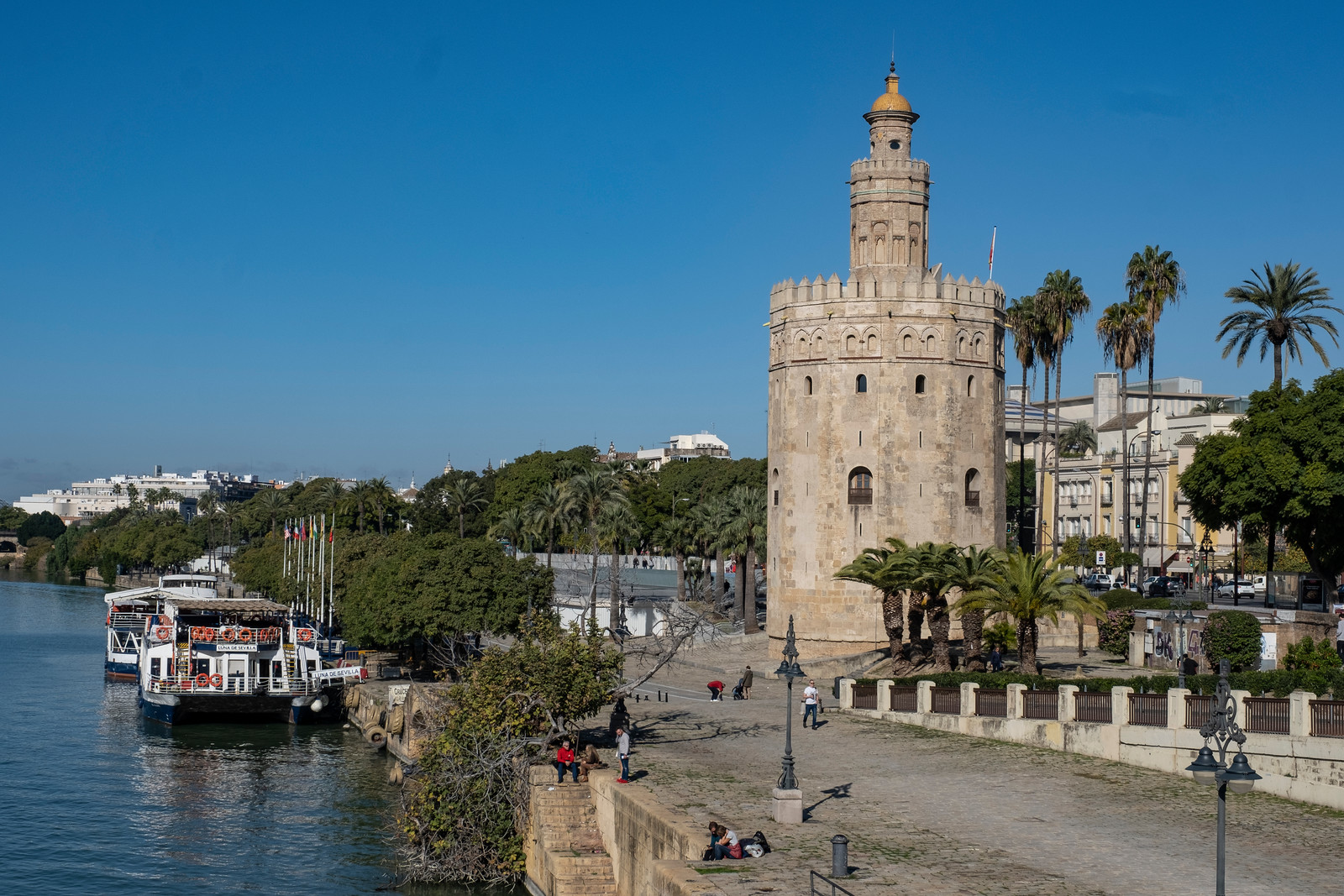 The Torre del Oro (“Tower of Gold”) is a dodecagonal military watchtower erected by the Almohad Caliphate (a Muslim movement and empire founded in the 12th century) in order to control access to Seville via the Guadalquivir river. 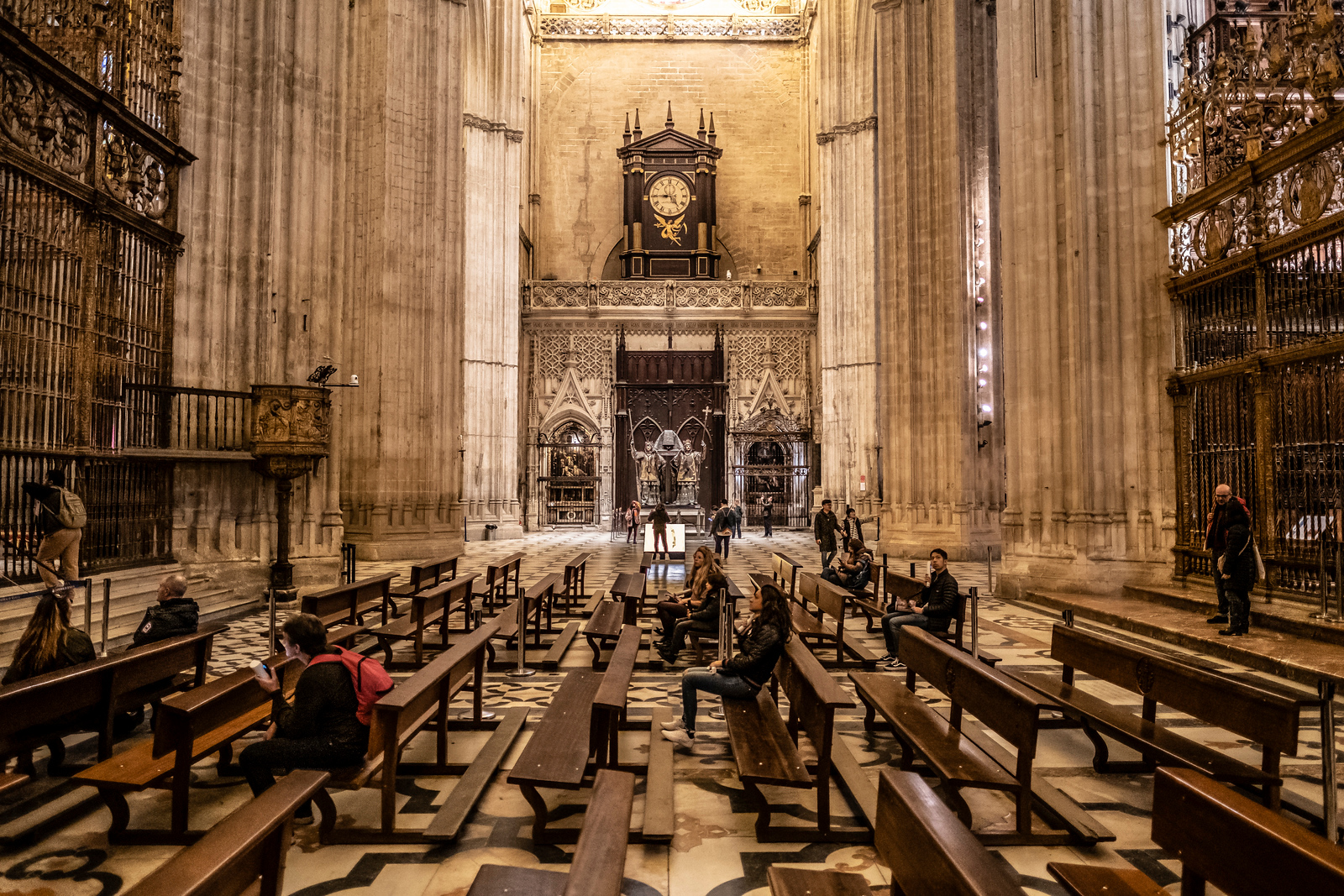 The Catedral de Santa María de la Sede, better known as Seville Cathedral, is a Roman Catholic cathedral built on the same large, rectangular base-plan of the mosque it replaced upon construction in 1401. It was registered a UNESCO World Heritage Site in 1987. Much, much more on this stunning cathedral in a future post…

Another UNESCO World Heritage Site, the Alcázar of Seville is a royal palace built for the Christian king Peter of Castile. It was built on the site of an Abbadid Muslim residential fortress that dates back to the late 11th century. More on this site in an upcoming post…

Hypnotic street music from @LALAGRIMA_ closed out our last night in Seville. Here’s where the Fujifilm X-T3 and the 56mm f1.2 and 16mm f1.4 lenses really shined. These guys were in almost complete darkness. Don’t think I would have even bothered with my Lumix. With the Fuji, I was able to get some pretty nice images. This camera really impressed.

Walking the streets of Seville at night in December was a truly special treat. The lack of mobs of tourists was another special treat. And having the Fujifilm X-T3 (and a few good lenses) in my hand for these night shots really captured how special this city truly is during “winter”…

Was my daughter diggin’ Seville? You bet. As was I. Seville is a must-see city in Spain. Nuff said. Visit their official tourism website to learn more www.visitasevilla.es/en. More photographs from Seville forthcoming so SUBSCRIBE HERE to stay in the loop.

Special thanks to the folks at Fujifilm for the great rental price on the Fujifilm X-T3. This is a wonderful camera for traveling. Light, comfortable to hold, great in low light with a snappy autofocus. Besides the camera, I had the 16-55 f/2.8, 56mm f/1.2, 16mm f/1.4, and 50-140mm f/2.8 lenses. Also grateful for my Lowepro SlingShot 102 Camera Bag which has been my faithful companion for the past 7+ years, and the Joby GorillaPod 3K Flexible Mini-Tripod. I also gotta tip my hat to my KEEN® shoes (I have the Finlay Oxfords). I mean, walking on cobblestone streets all day is tough on your feet. I had brought along a pair of Skechers Memory Foam Shoes as well as my adidas Cloudfoam sneakers. Neither of them even came close to my KEEN® shoes as far as comfort. If you plan to walk around Europe’s rough cobblestone streets, these rugged shoes won’t let you down. Nuff said.

Written By DanPerezPhotography On February 25, 2019

One Tamarac Multi-Cultural Festival (In Pictures)