Pérez Art Museum Miami (PAMM) is a modern and contemporary art museum dedicated to collecting and exhibiting international art of the 20th and 21st centuries. The exhibitions highlight Miami’s diverse community and pivotal geographic location at the crossroads of the Americas. Founded in 1984 as the Center for the Fine Arts, it became known as the Miami Art Museum from 1996 until it was renamed in 2013.

The museum cost $220 million to build, with $100 million coming from Miami-Dade voters in general obligation bond funding, and $120 million from private donors. Argentine American billionaire real estate developer Jorge M. Pérez made a gift of $35 million ($20 million in cash and $15 million in Latin American art), to be paid in full over ten years, to support the campaign for the new museum, which was in turn renamed the Jorge M. Pérez Art Museum of Miami-Dade County. The renaming of the museum after Pérez incited controversy, causing several board members to resign. 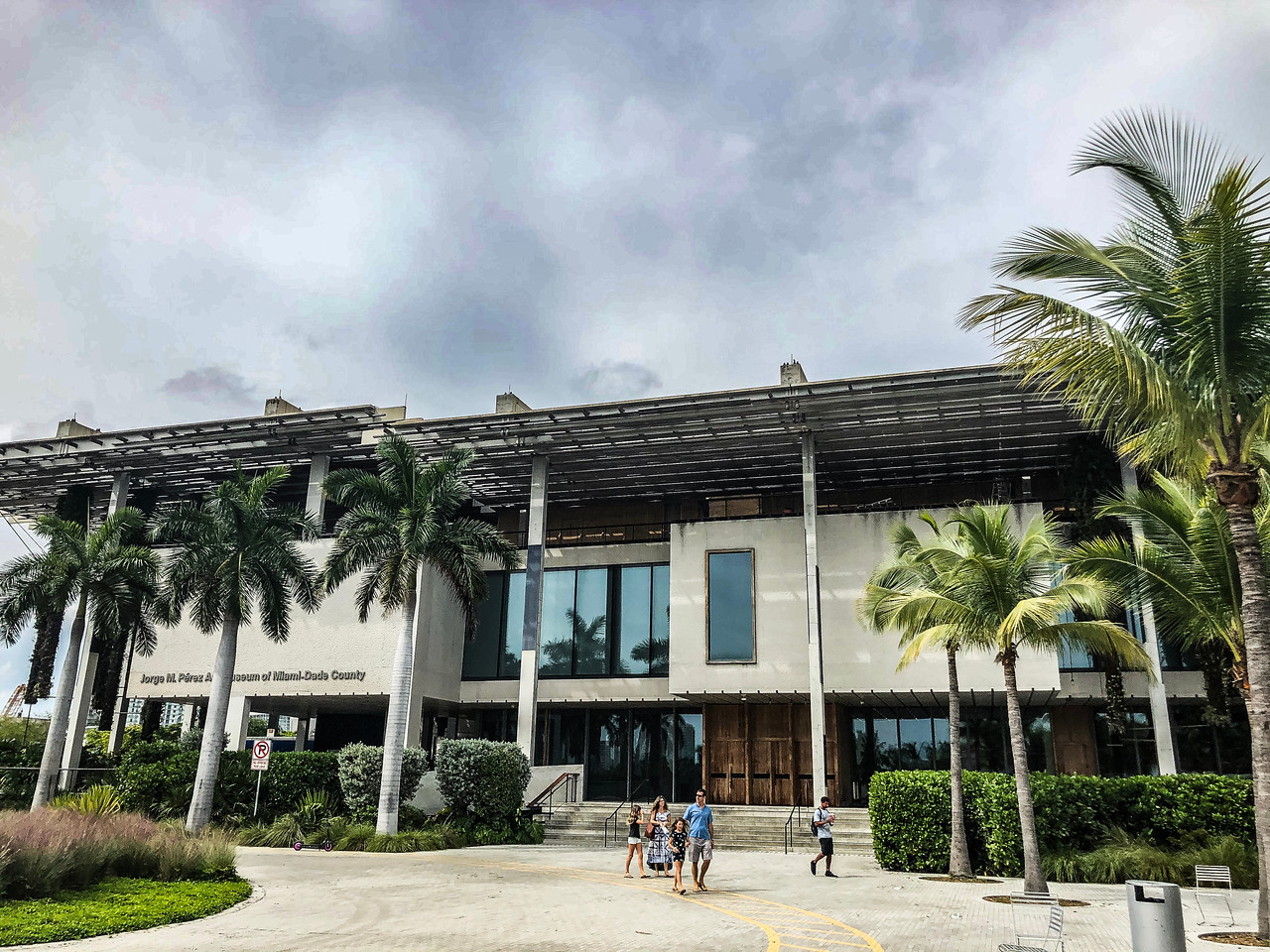 Since its opening, however, the museum has seen record attendance levels with over 150,000 visitors in its first four months alone while Herzog & de Meuron’s design for the new building has drawn critical acclaim. Additionally, over 215,000 children have been served by its educational programs since opening in December 2013, with 60,000 per year as of August 2019. PAMM’s programming is the largest provider of art education outside of Miami-Dade County public schools system.

The facility is a state-of-the-art model for sustainable museum design and progressive programming and features 200,000 square feet of indoor and outdoor program space with flexible galleries; shaded outdoor verandas; a waterfront restaurant and bar; a museum shop; and an education center with a library, media lab, and classroom spaces. And it is here where I found myself this past week as the museum offered up its location for a series of interviews I was shooting for AFP Miami‘s upcoming National Philanthropy Day Awards Luncheon on November 1st at the Downtown Miami Hilton.

With a couple of hours to kill between interviews, I was kindly given a pass to peruse the museum’s varied art offerings. I had been there once before with my wife and daughter back in 2014 when the museum was in the process of reinstalling several of its galleries. So five years later, I was back at PAMM. What did I think of the museum in 2019? You can read all about it below. But first, a few photographs… 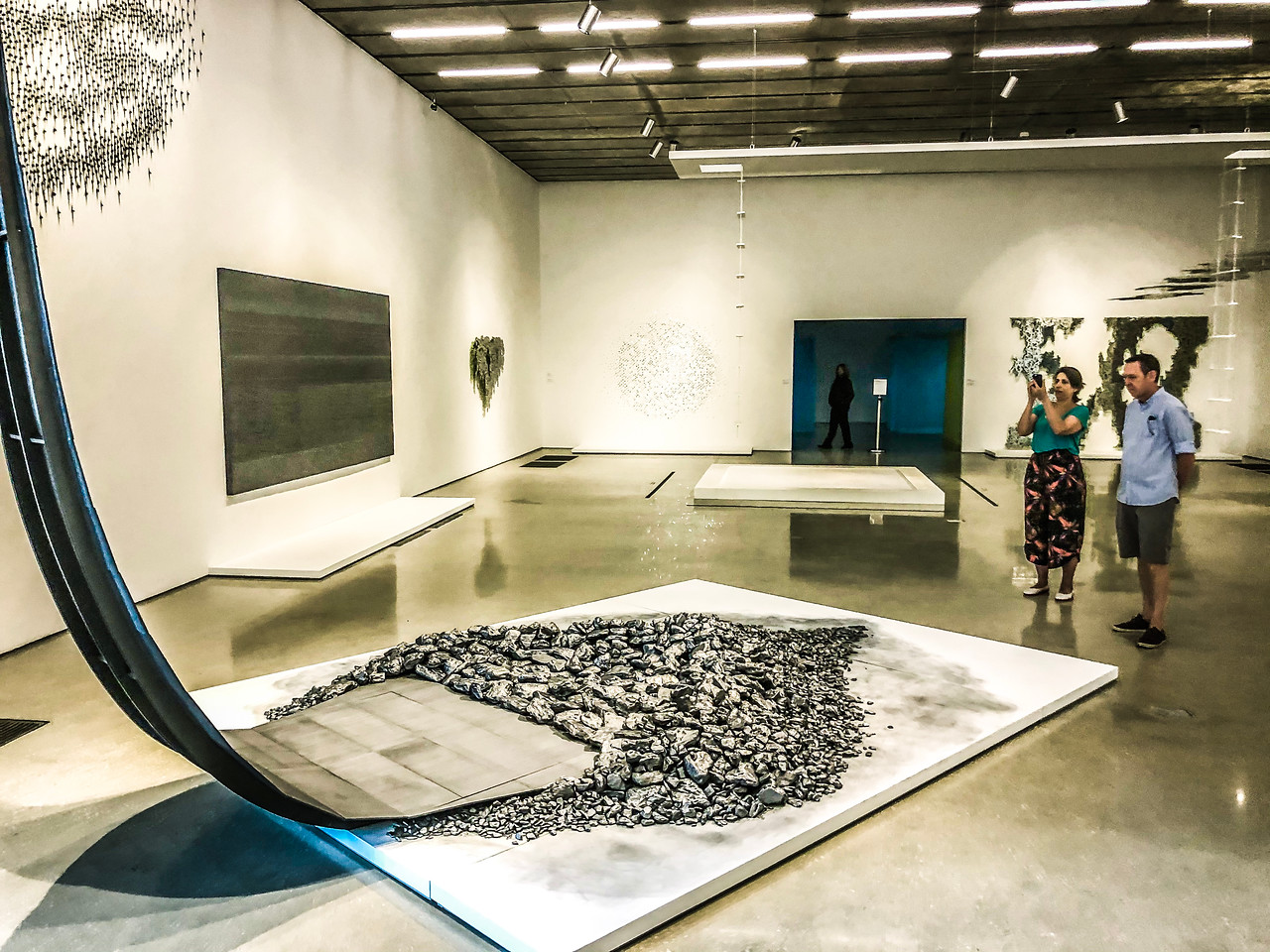 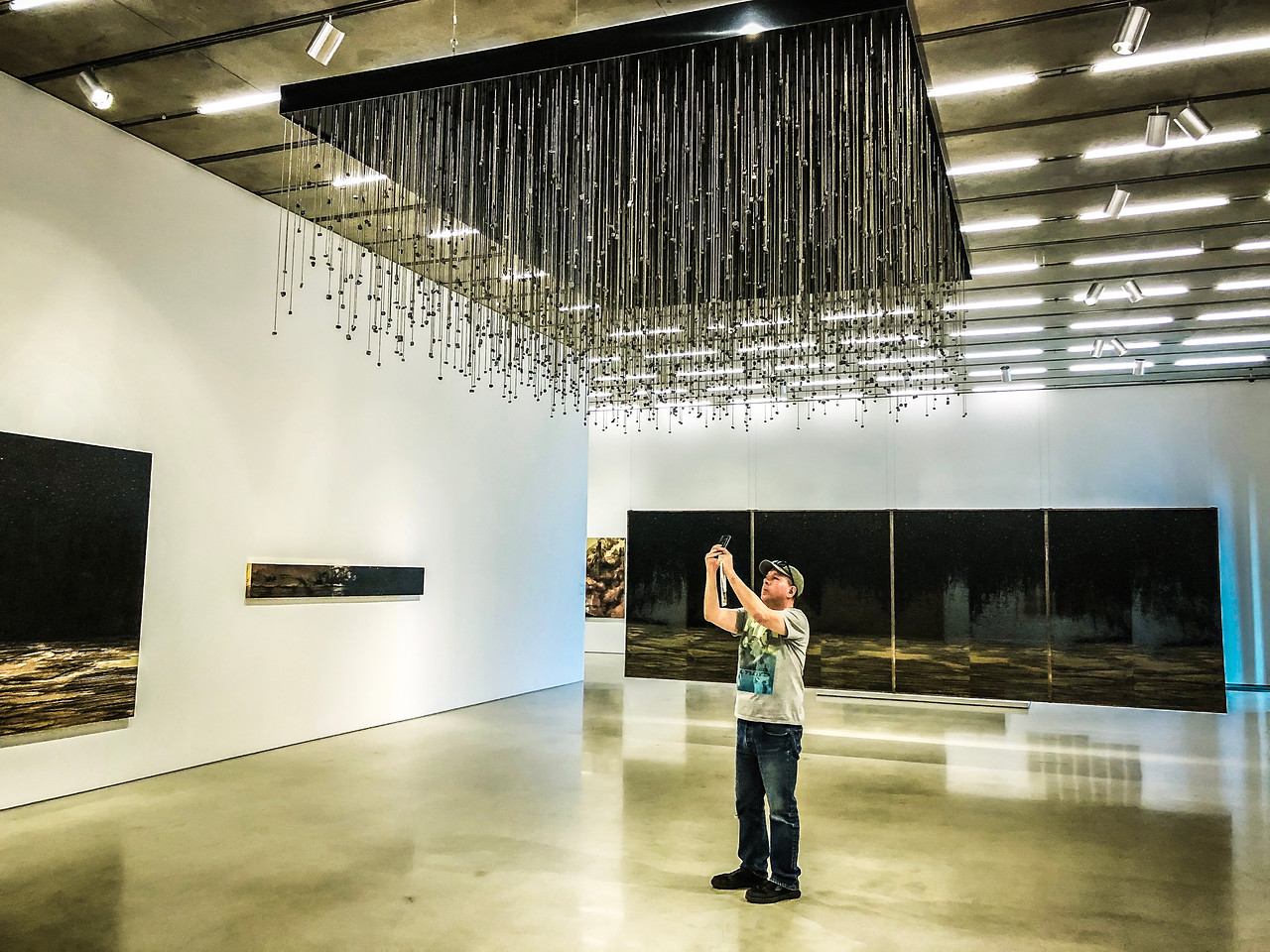 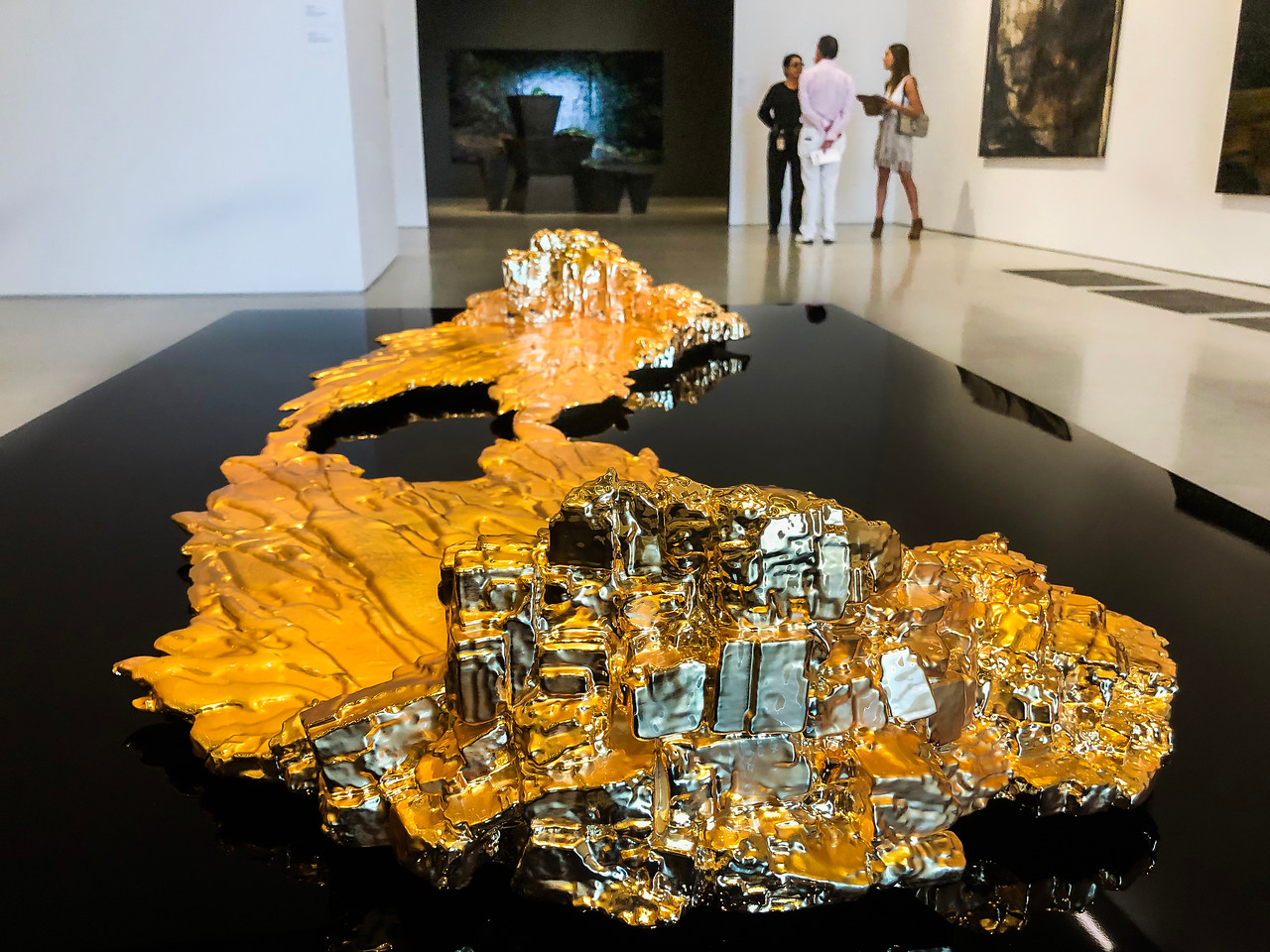 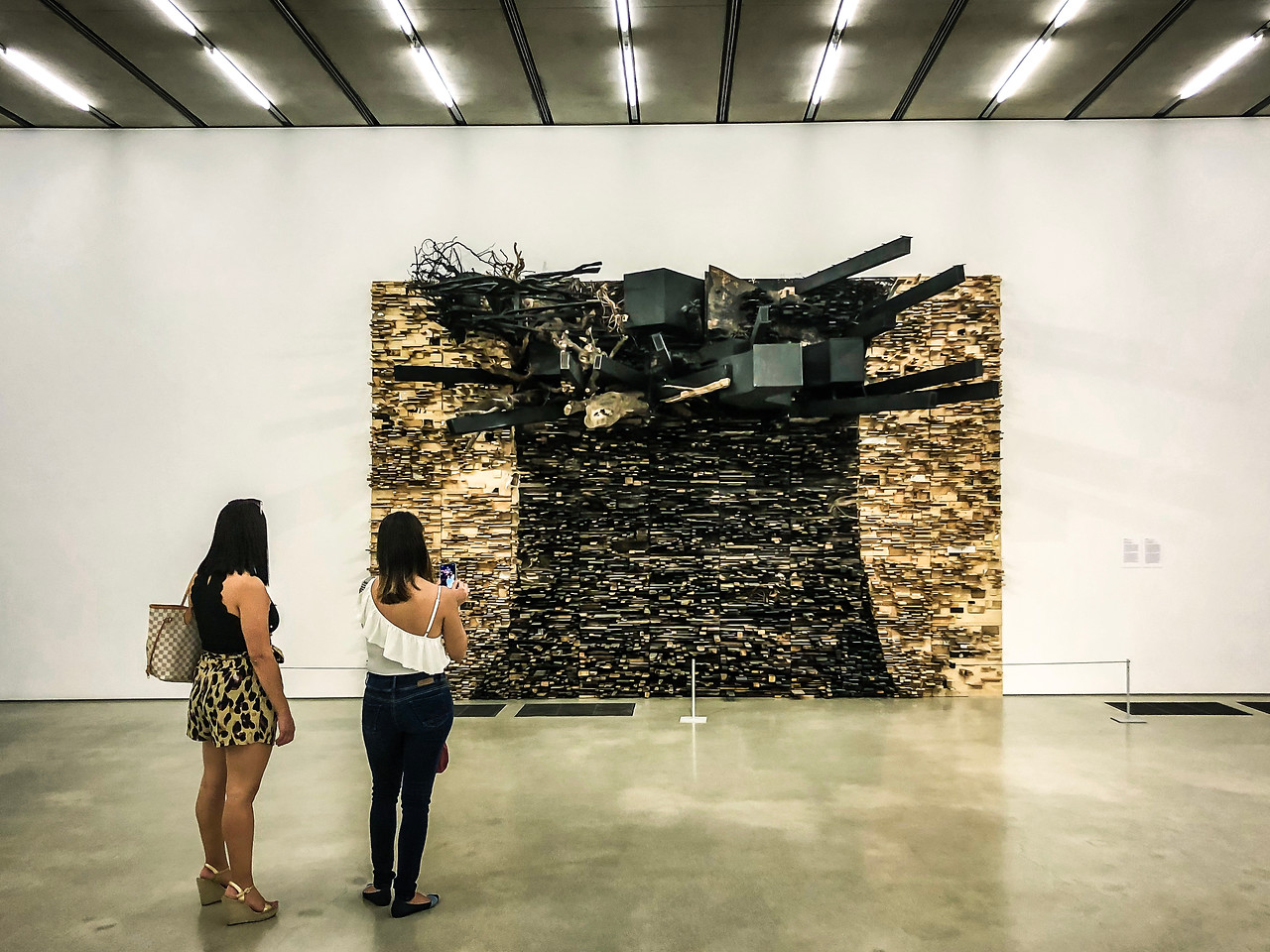 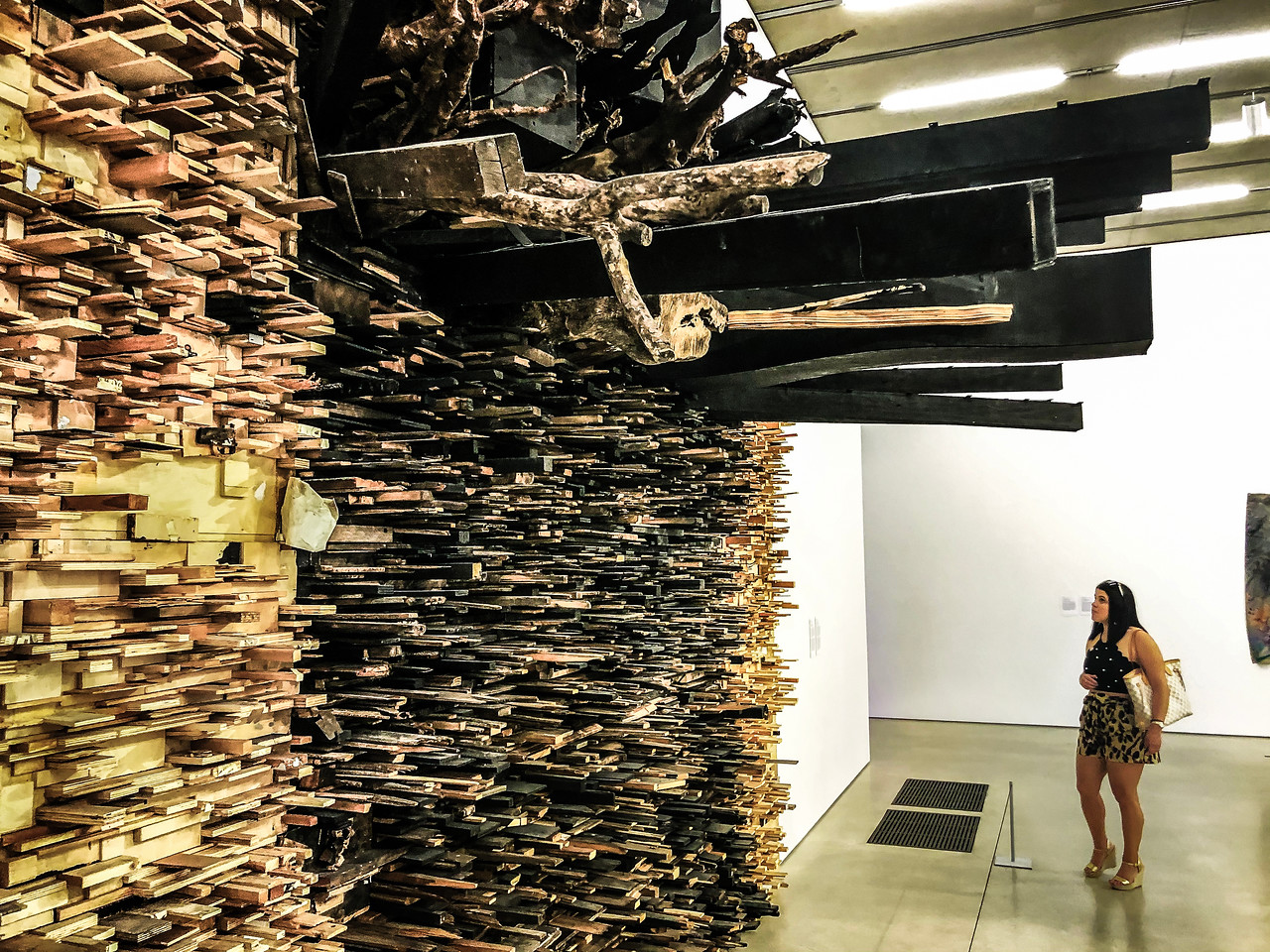 “Number 163” {2012}, a massive structure composed of transformed natural materials, by Leonardo Drew, a contemporary artist based in Brooklyn.

On the left, Derek Fordjour’s richly textured “Worst to Be First” {2019} shows an enigmatic portrait of a lone black tennis player and on the right is “Revolution Ballet” {2017} by Zhao Gang, a key figure in the development of Chinese contemporary art.

“Cocksucker Blues” {2014–15} by Zhao Gang, from his ‘History Painting’ exhibit. The painting is named for a Robert Frank documentary about the Rolling Stones’ 1972 tour. Though the Stones commissioned it, they later tried to prevent the film from being distributed due to its many scenes involving drugs, sex, and general hedonism. For his part, Gang’s painting depicts 21 Chinese intellectuals who were targeted during the country’s Cultural Revolution under Mao Zedong. 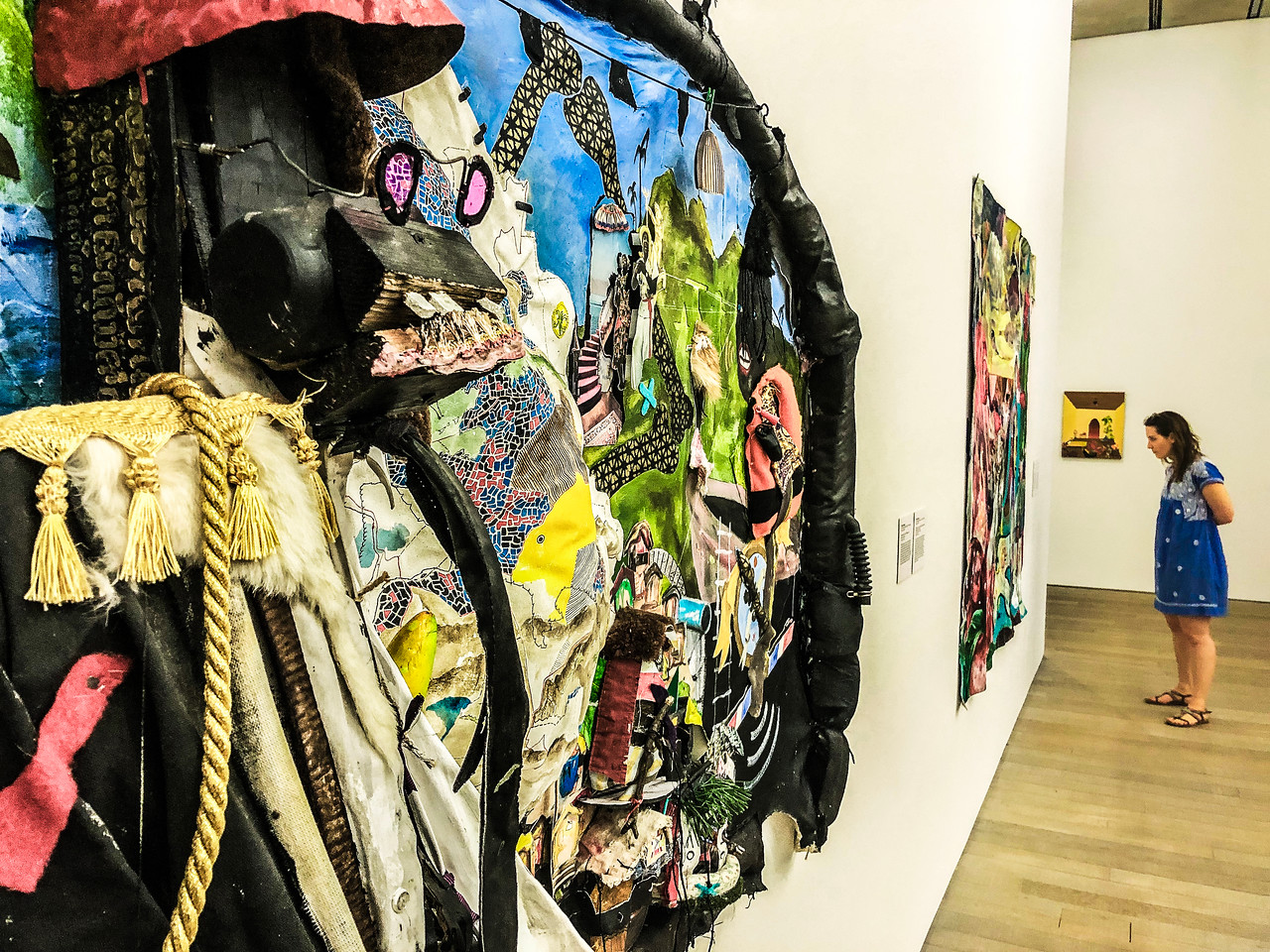 In the foreground, “Bundlehouse: Because after the fracture came something like paradise” {mixed media and found object sculpture on canvas, 2019} by Nyugen Smith 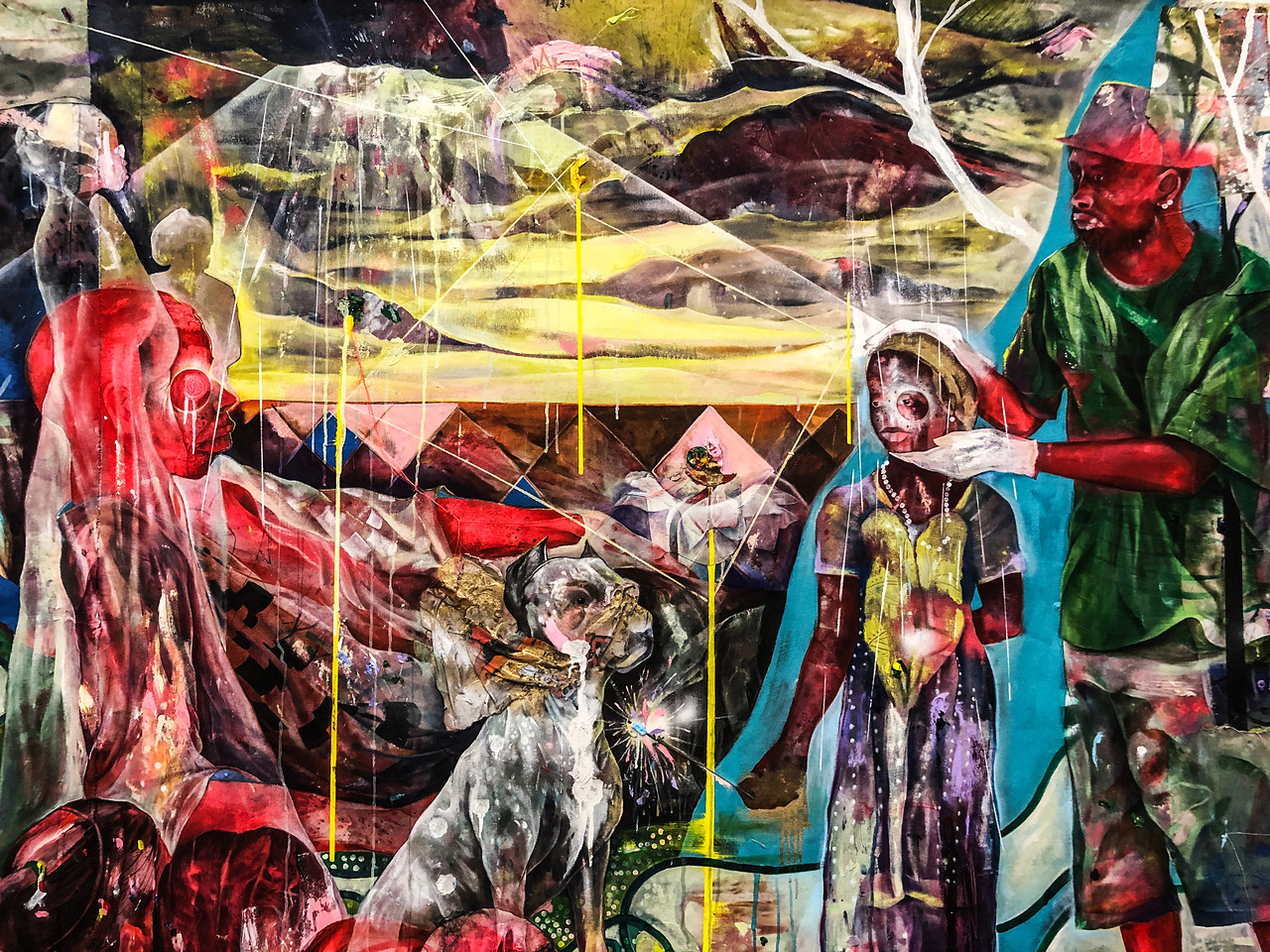 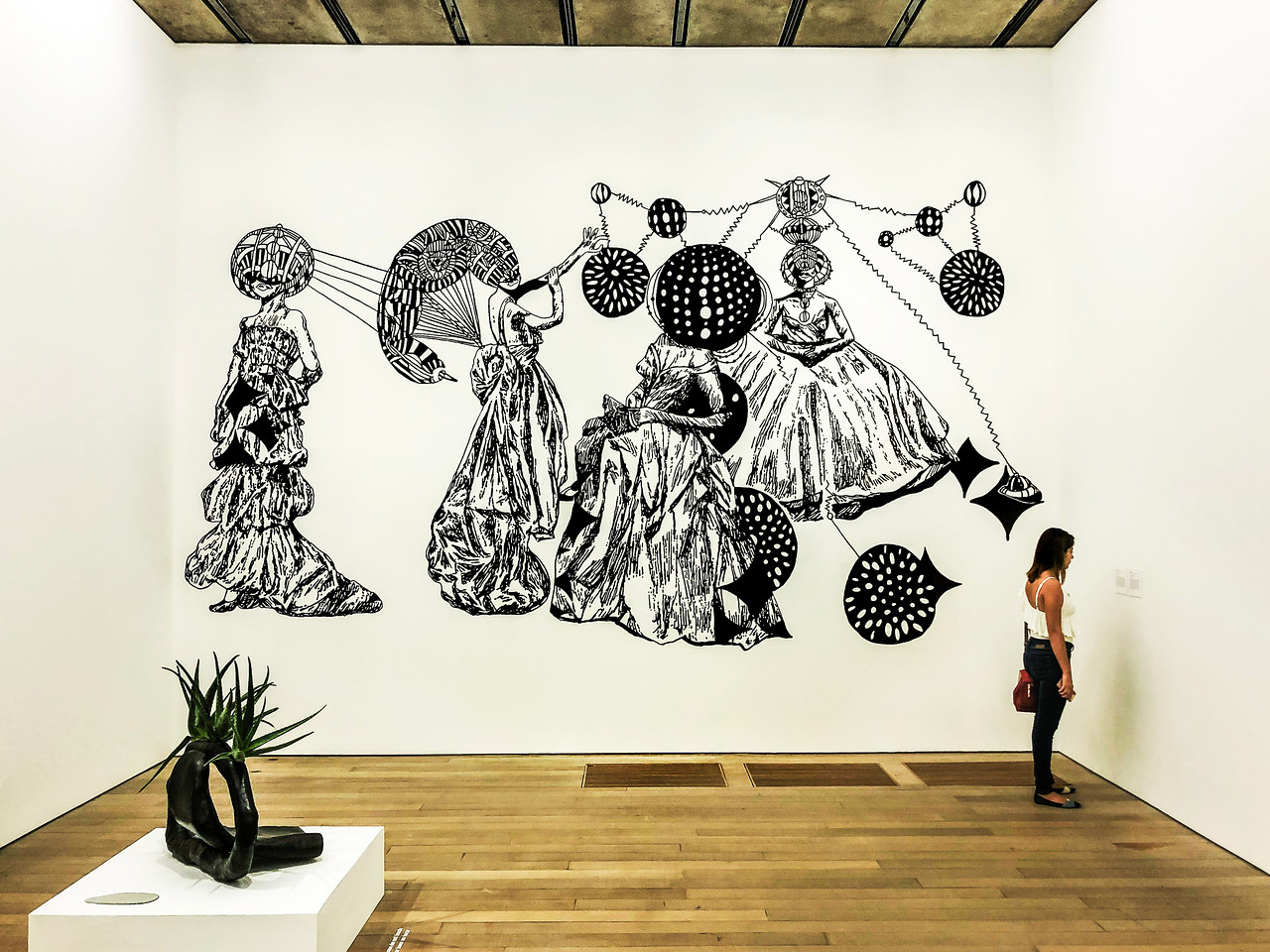 On the left, “Naked City” {1970s} by Rev. Albert Wagner and on the right “Jardines del Hamberguito” {2019} by Puerto Rican artist Cristina Tufiño 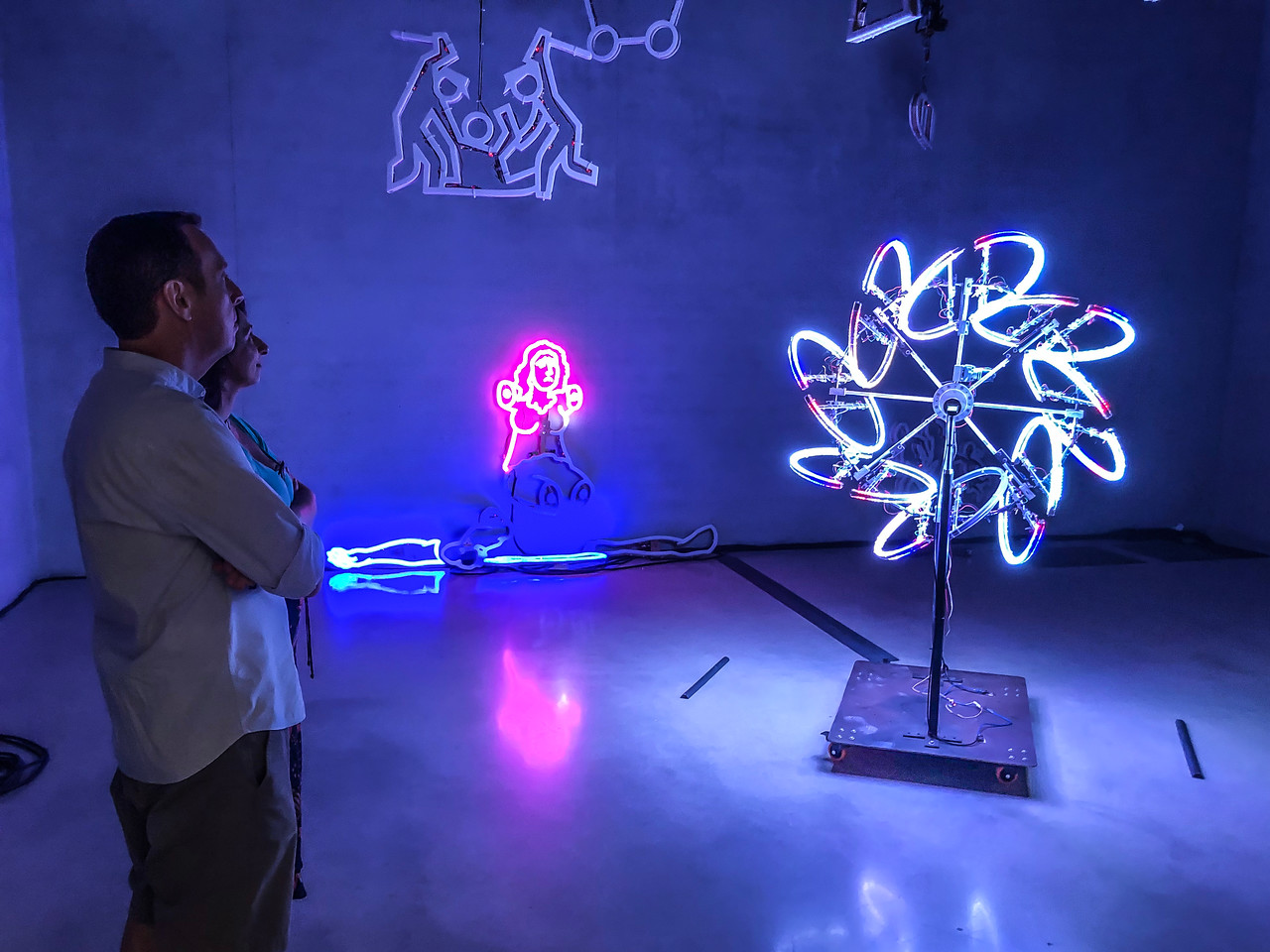 Peruvian artist José Carlos Martinat’s “American Echo Chamber” {2018}, an installation that responds to the amplification and reinforcement of ideas in the current social and political landscape. 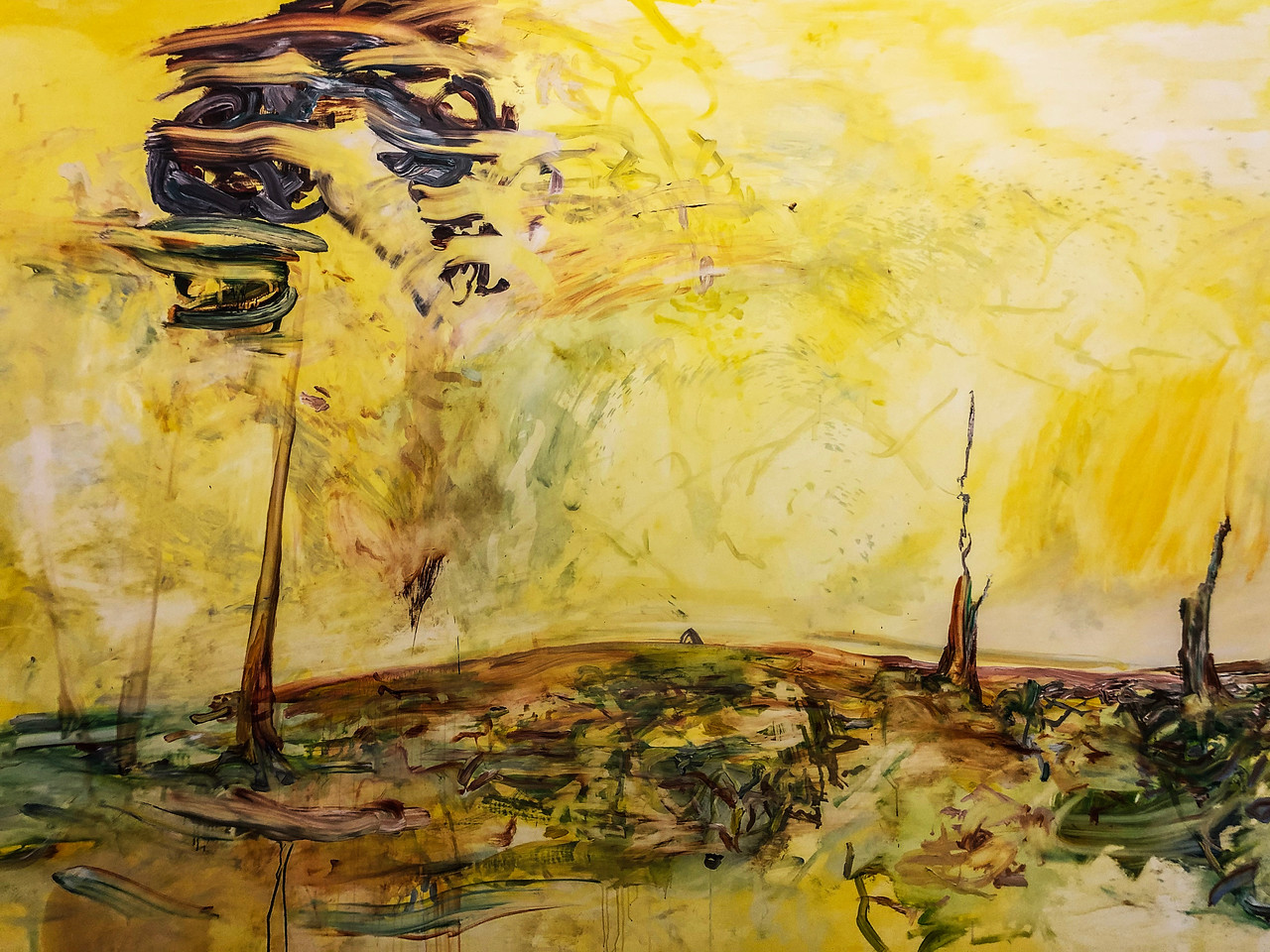 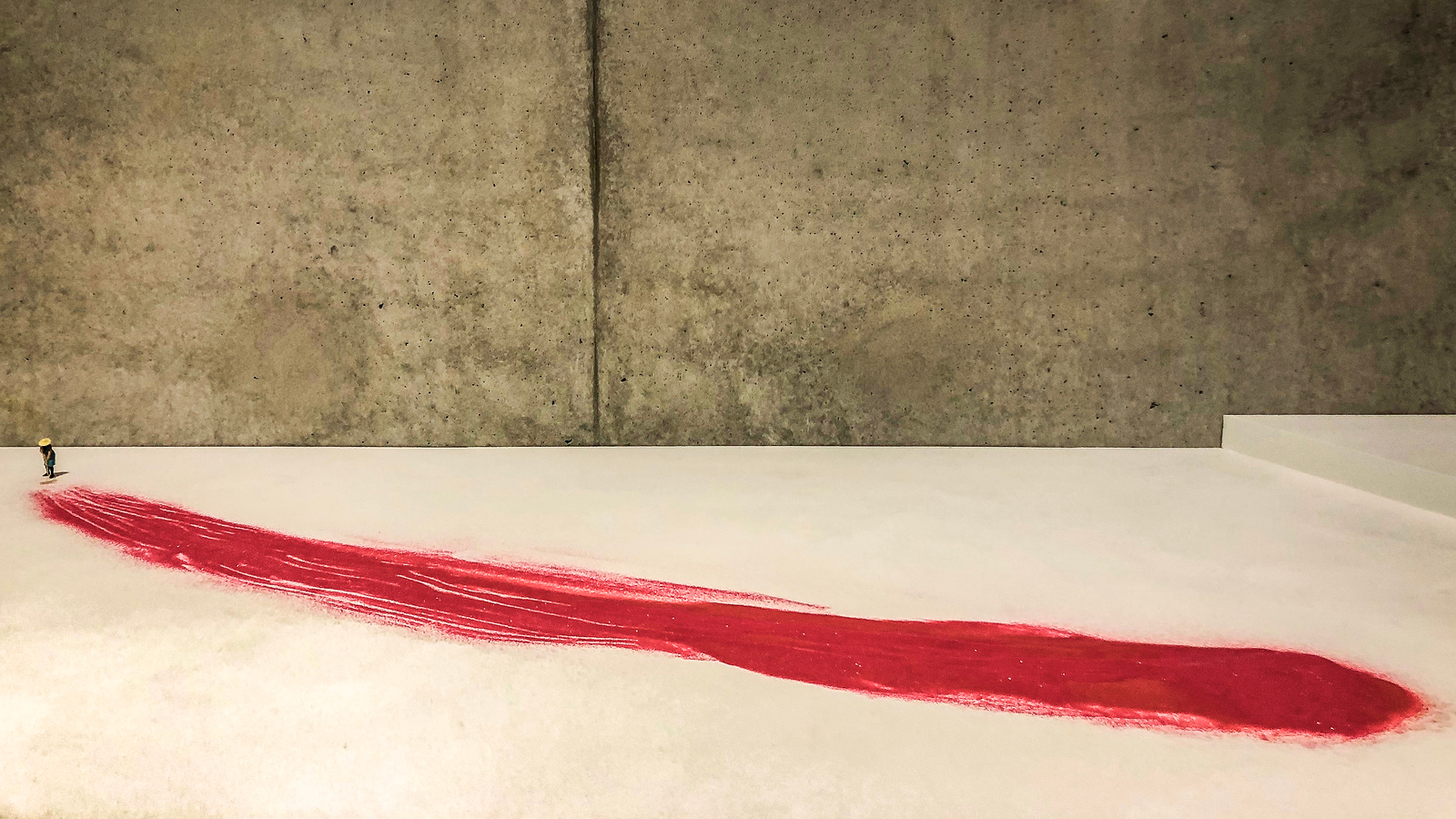 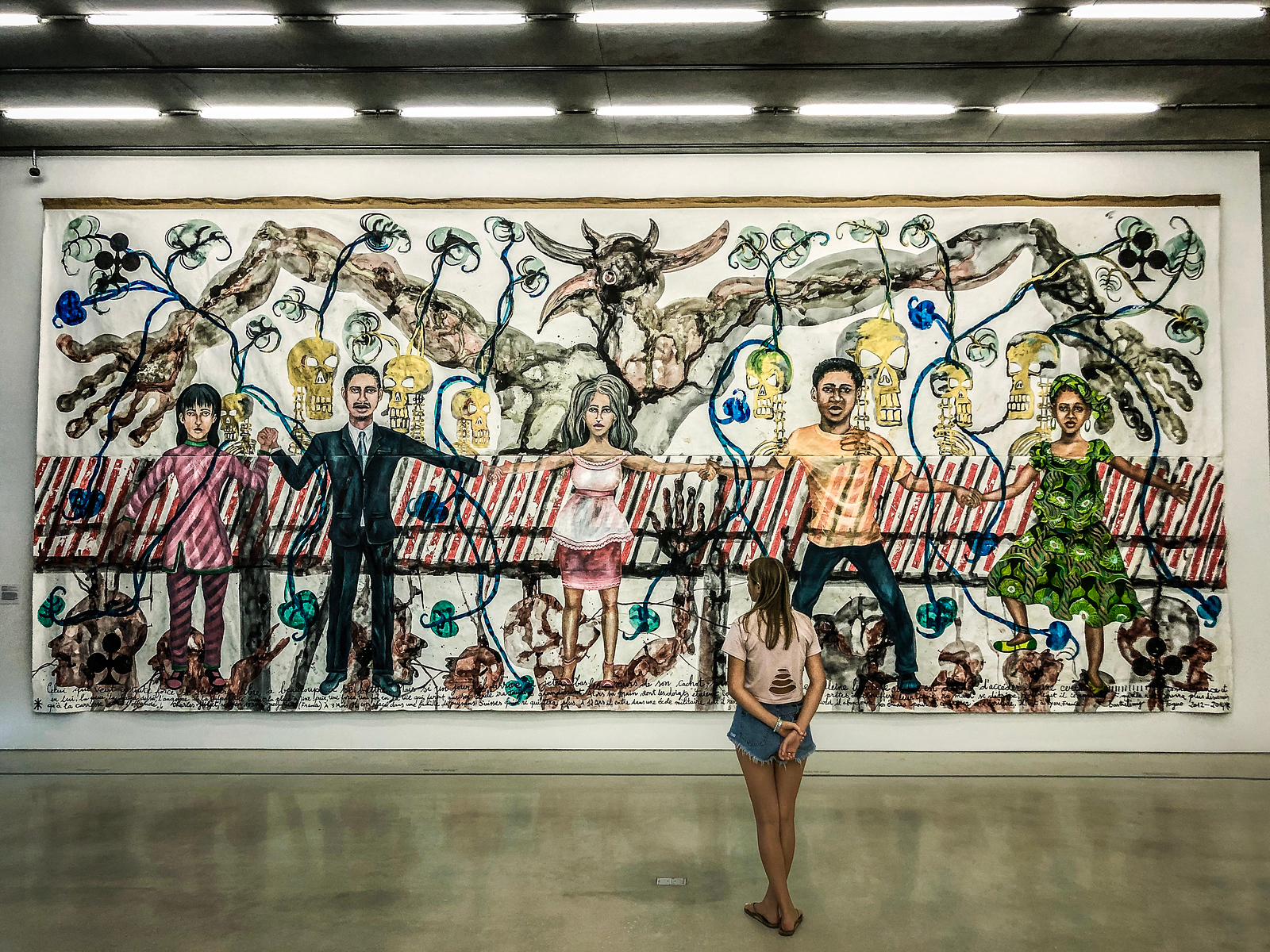 Outside the museum, you can take in the spectacular views of Biscayne Bay, enjoy waterfront dining under the elaborate hanging gardens at Verde restaurant; or just sit and relax…

My return to the Pérez Art Museum Miami five years after my first visit was not a disappointment. It has more to offer than it did back in 2014 and from someone who has visited several art museums around the world, this museum is well worth visiting. PAMM is closed on Wednesdays and admission prices range from free for kids 6 years old and under to $16 for adults. Admission is free every first Thursday, 10am-9pm for evening talks, performances and screenings. Parking is $8 for the first hour and $4 for each additional hour. Photography IS allowed (unless noted otherwise) but only with camera phones. If you’re not dining at Verde restaurant, the Pérez Art Museum Miami can be enjoyed in 2-3 hours. If you’re an art lover, you won’t be disappointed. Promise.

All photos taken with iPhoneX and edited to taste in Photoshop

Written By DanPerezPhotography On October 20, 2019