Sanctuary of Atotonilco: “The Sistine Chapel of Mexico” (In Pictures)

If you’ve been following this blog (and why wouldn’t you be? SUBSCRIBE HERE), you’d know that my daughter and I traveled to Mexico for two weeks back in May. We started off in Mexico City where we visited its bustling Historic Center (pics HERE), the stunning Museo Nacional de Arte (pics HERE) and the holy city of Teotihuacán (pics HERE). From Mexico City, we took an Uber about 130 miles NW to the charming city of Querétaro (pics HERE) before heading to our next destination, San Miguel de Allende, Mexico’s Top Travel Destination City (pics HERE). 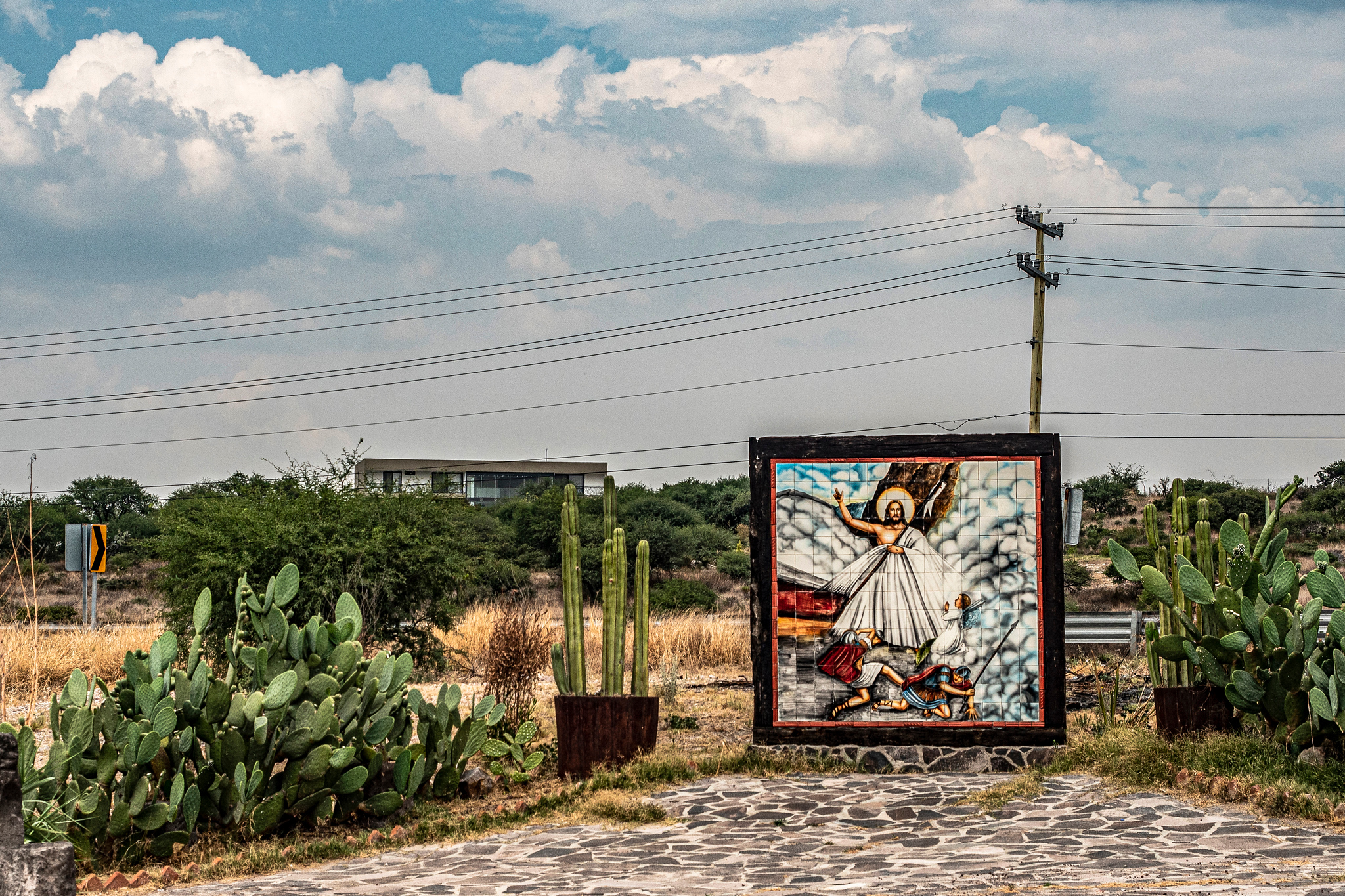 The Sanctuary of Atotonilco (Santuario de Jesús Nazareno de Atotonilco) was built in the 18th century by Father Luis Felipe Neri de Alfaro, who, according to tradition, was called upon by a vision of Jesus with a crown of thorns on his head and carrying a cross. The main feature of the complex is the rich Mexican Baroque mural work that adorns the main nave and chapels. This was chiefly the work of local artist Antonio Martínez de Pocasangre over a period of thirty years. The mural work has led the complex to be dubbed the “Sistine Chapel of Mexico” and it remains a place of worship and penance to this day, attracting as many as 5,000 visitors every week.

The area also has a large number of thermal and fresh water springs (the name Atotonilco means “Place of the Hot Waters”). When the sanctuary was built, there were 27 fresh water springs to support gardens around the complex. Today, thermal waters still rise up from the ground only one km from the sanctuary, and another spring at the community entrance has been covered by an artificial cave and is used as a spa called Balneario La Gruta. Alas, we didn’t have the time to visit the springs (next time, perhaps). 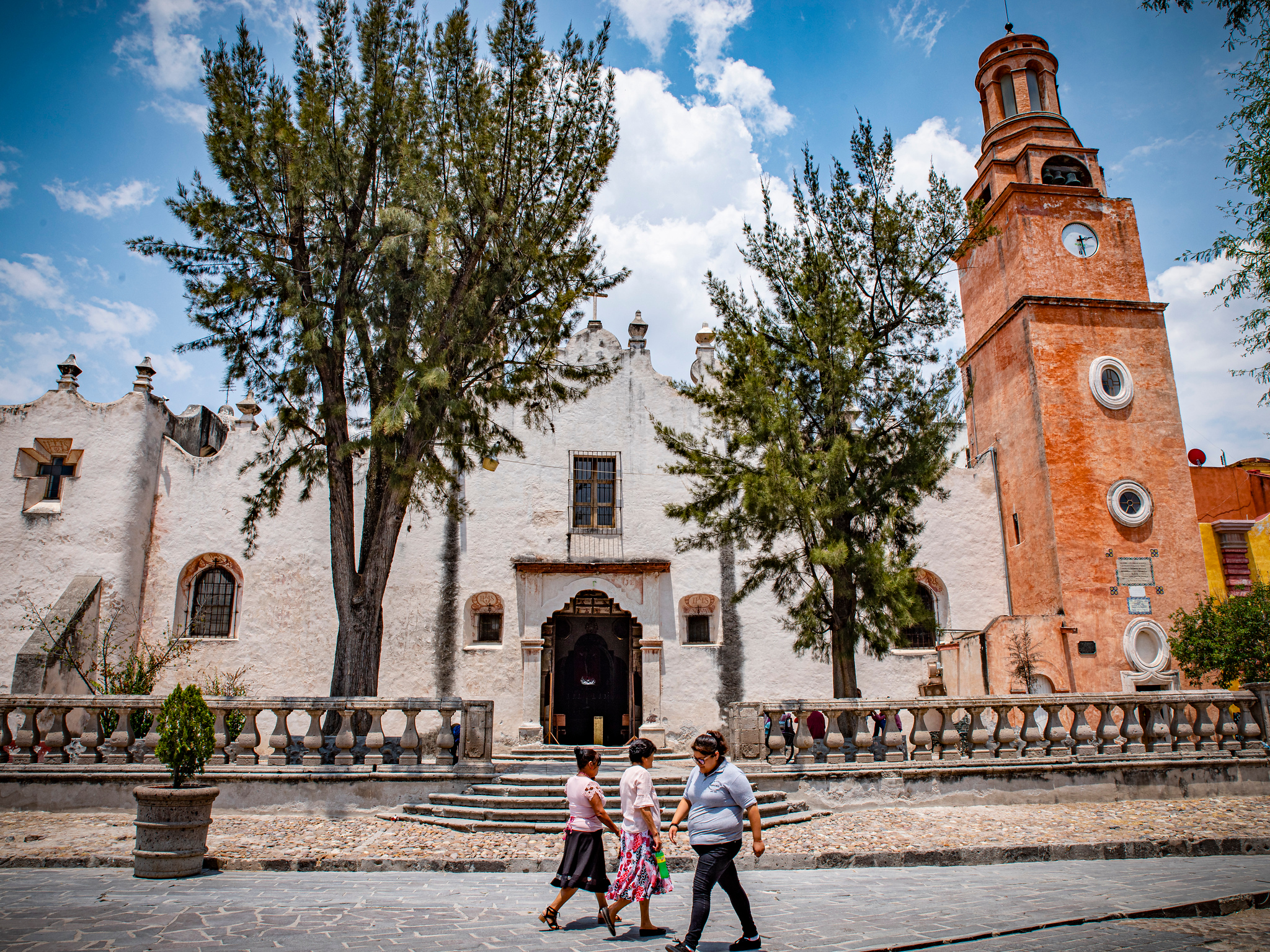 The outside of the church is simple — a belled dome rising above ten meters high pink-gold stone walls; looks almost like a fortress. But when you walk through the doors, you walk into another world… 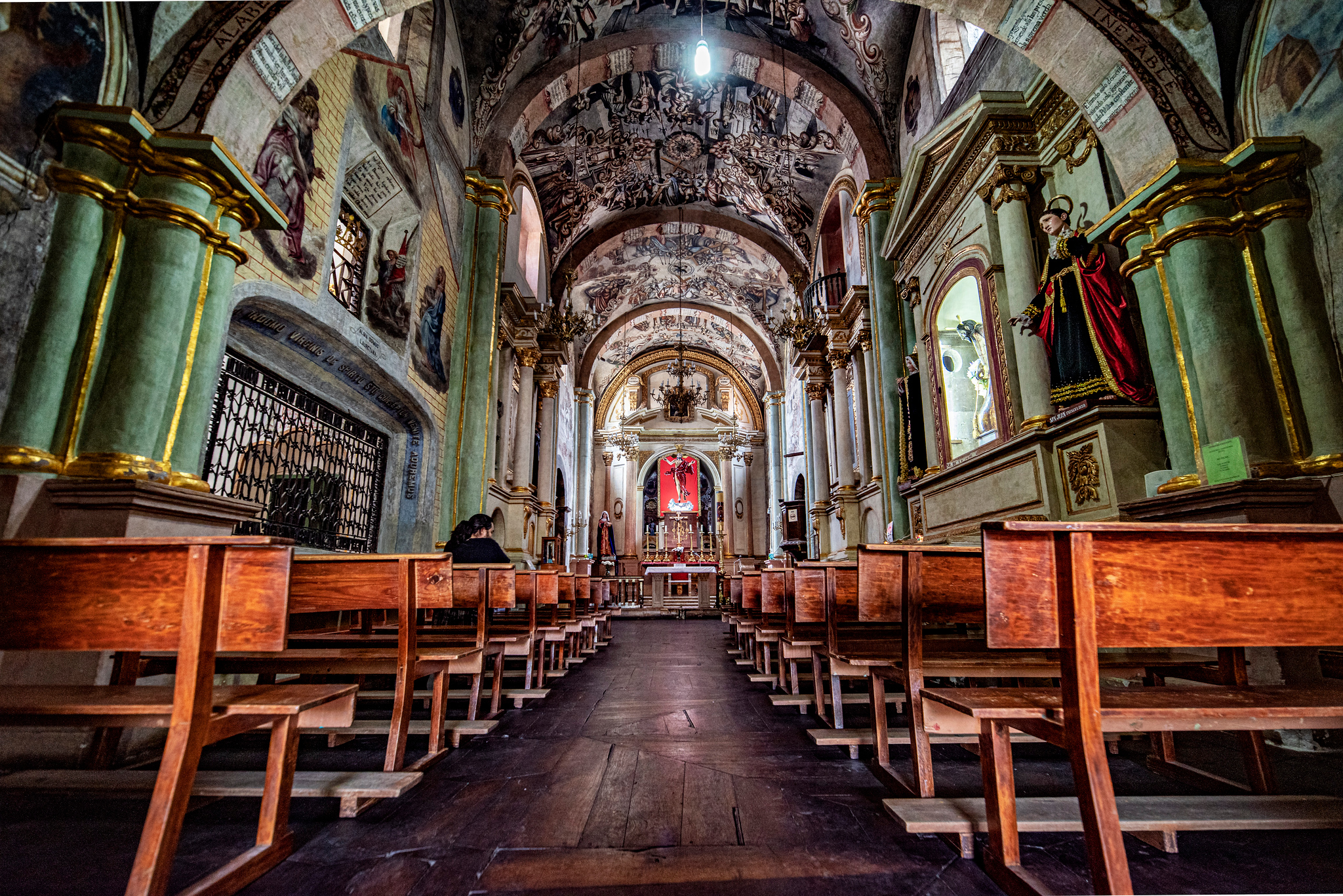 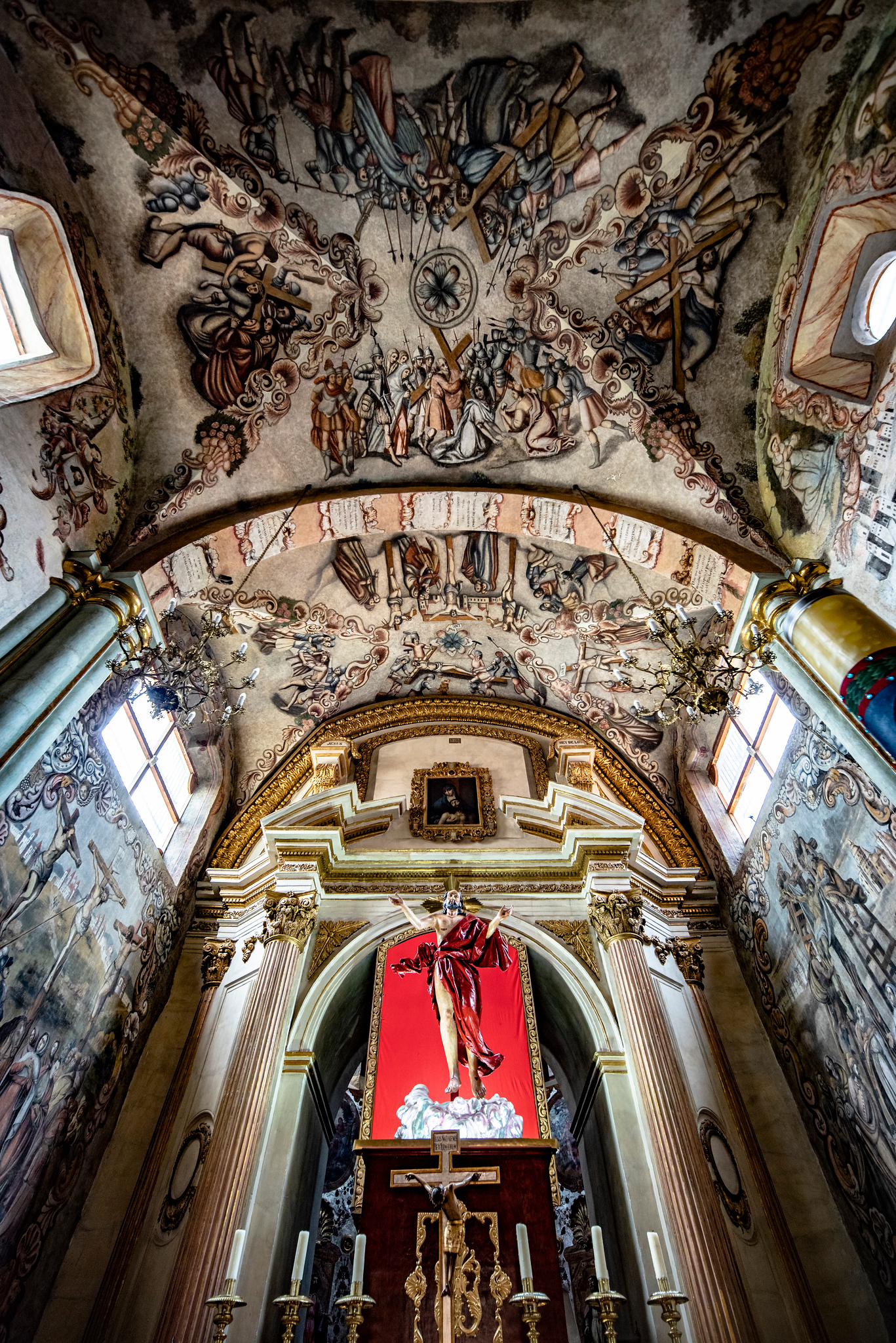 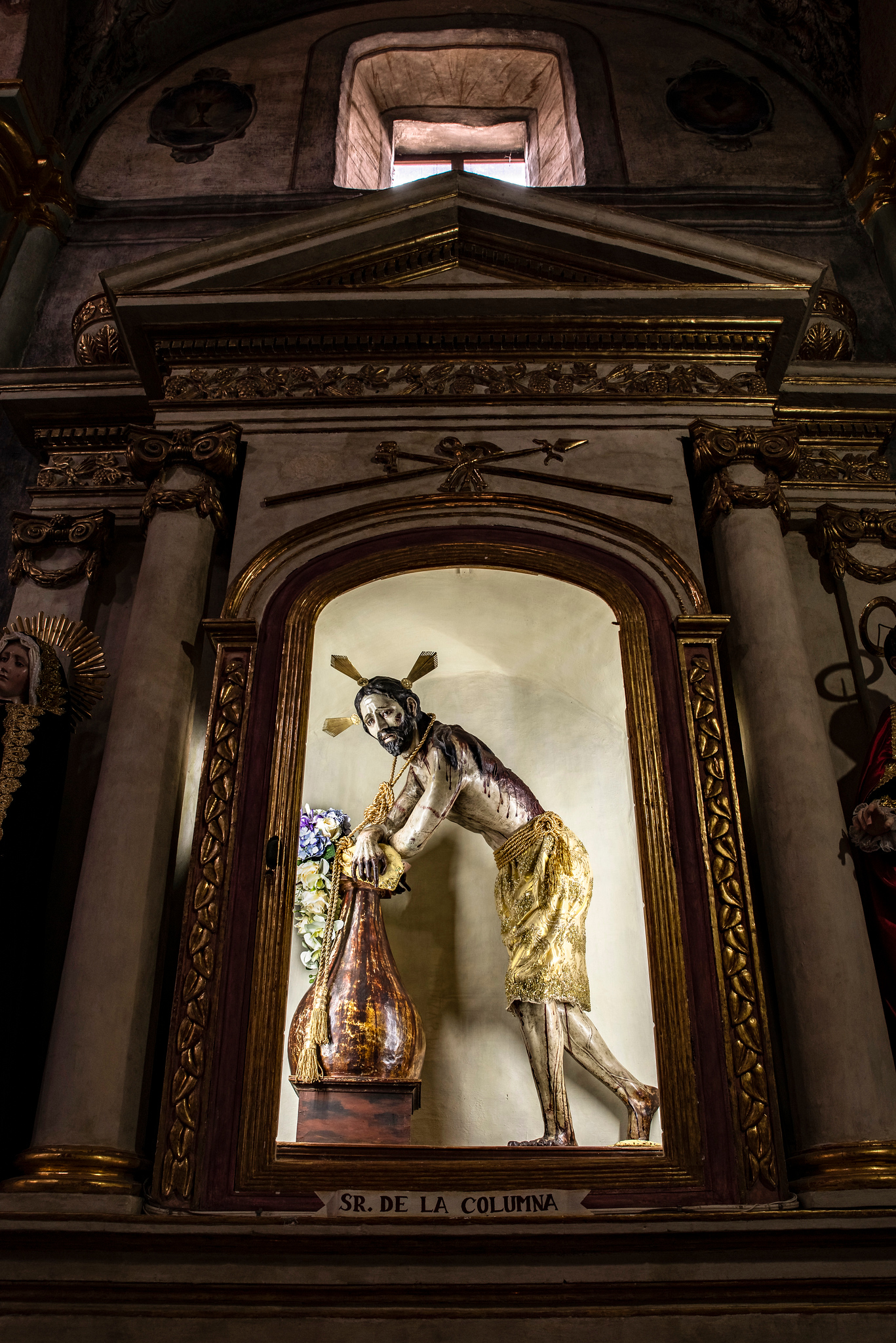 One of the most revered items in the church, the statue of Our Lord of The Column (La Milagrosa Imagen del Señor de la Columna). Several miracles have been attributed to this statue of a bloody Christ leaning heavily on a gilded pedestal. Every year, at the beginning of Holy Week celebrations, the statue is carried in a solemn midnight procession from Atotonilco to San Miguel de Allende. The statue will remain in San Miguel until Holy Week observances are finished.

One of several chapels branching from the nave is the glittering Rosary Chapel. The Capilla del Rosario was constructed in 1763 and its vault is divided into four triangular segments. The north segment contains a naval battle where galleons, with Spanish and Ottoman coats of arms, fire at each other, referring to the Battle of Lepanto. The Virgin of the Rosary is credited with the Spanish victory. 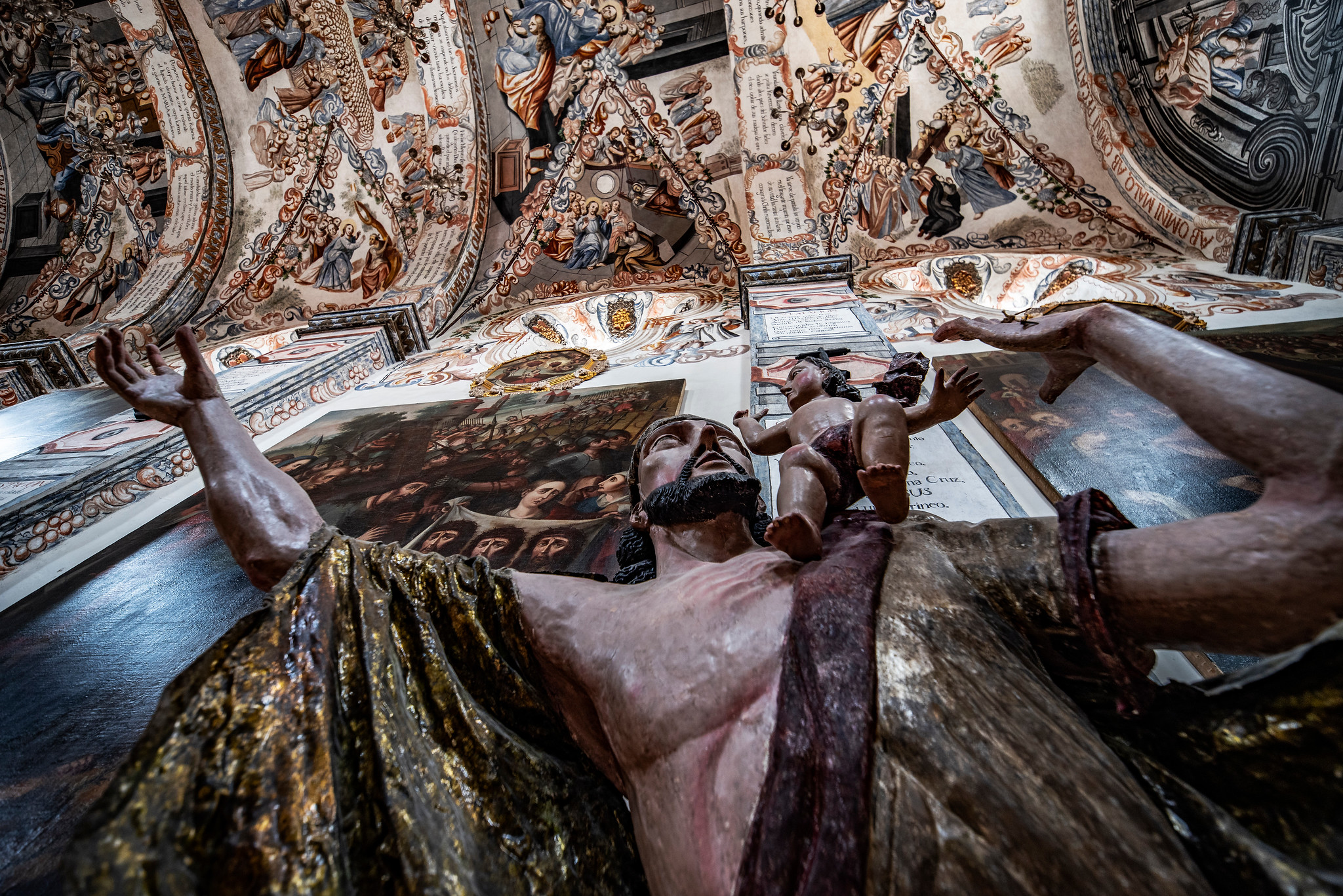 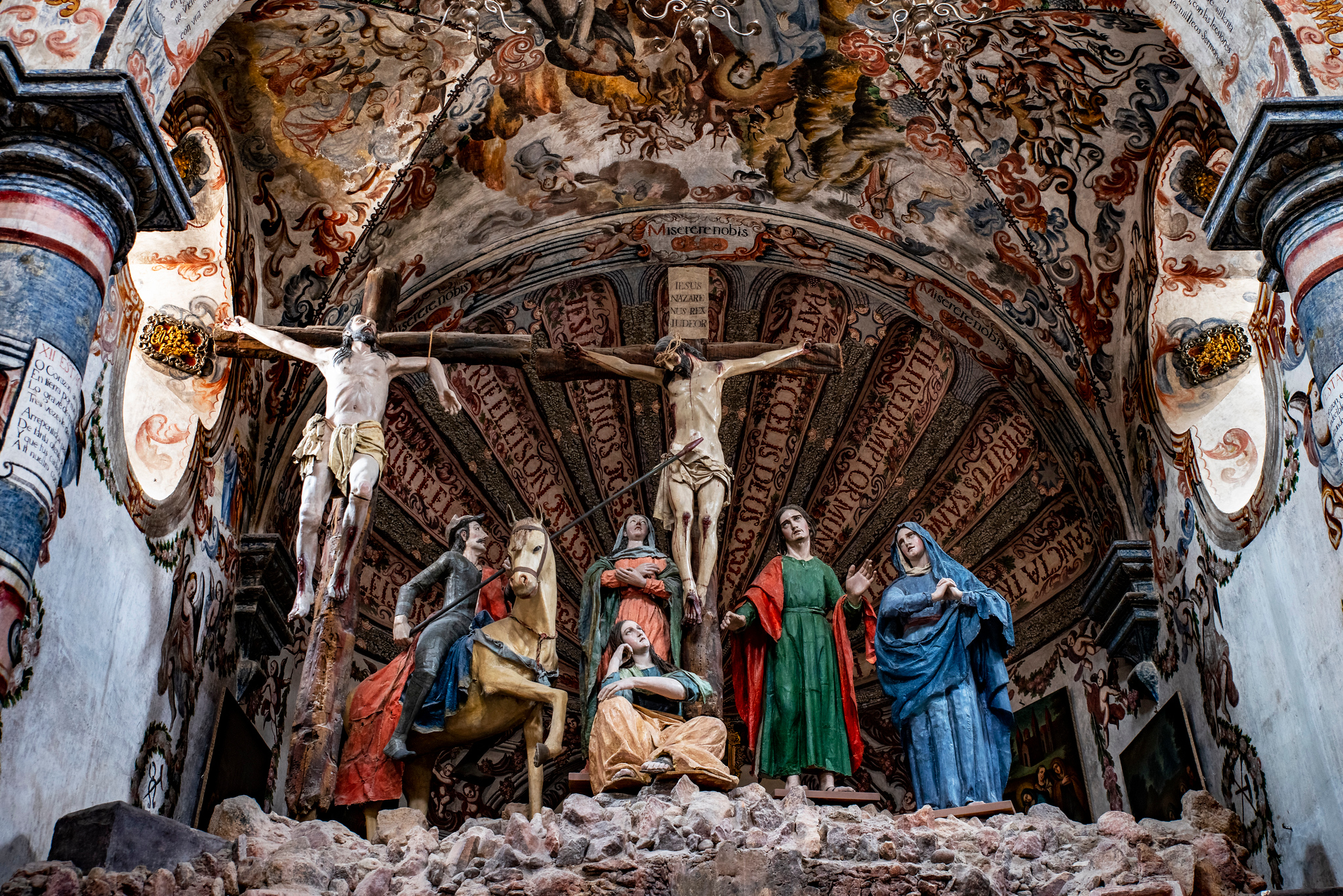 At the rear of the church (before heading back outside) is an annex that houses the Chapel of the Holy Burial (Capilla del Santo Sepulcro), which was built between 1759 and 1763 and is the largest in the church providing ample space for three altars. The murals here were begun in 1760 and center on the death, burial, and resurrection of Jesus. The Capilla de Calvario or Calvary Chapel (above) is the largest of the complex and was built between 1763 and 1766. We had to wait for an attendant (who was on her lunch break) to let us into this area as it is gated and not regularly open.

On this particular day, the dusty streets of Atotonilco weren’t thronged with tourists or pilgrims – just an old woman asking for a few pesos (my daughter and I both gave).

TRAVEL TIP: You can get to Atotonilco via Uber from San Miguel de Allende (we did) but there was no internet service to be had in this small town. We had just enough service to call our hotel (had to try the call about five times) and have them send us a taxi. So, if you’re visiting this amazing sanctuary (and you really should), make sure your hotel sends a taxi for you (you’ll need about an hour or 90 minutes if you plan on taking a lot of photographs).

>CLICK HERE TO VIEW THE FULL GALLERY OF IMAGES

Where did we stay in San Miguel de Allende? The Boutique Hotel Casa Don Quijote which was more than nice enough for our needs. Walking distance to La Parroquia de San Miguel Arcángel and the town’s Historic Zone (albeit a mostly uphill walk – the good news is, it’s a mostly downhill walk back to the hotel), hot breakfast included and, more importantly, it was one of the few hotels in San Miguel de Allende that had AC in each room. It was very hot during the day in May (and I live in South Florida so I know hot) and yeah, it gets a bit cooler at night but not to the point where I could have slept without the AC on.
TRAVEL TIP: If you’re like me and like to sleep in a cool room at night, make sure your hotel in San Miguel de Allende has AC (many hotels in the area DO NOT) – especially during the months of April-June (the region’s hottest months).
TRAVEL TIP: Do not drink the water – even when they claim its purified or boiled. After being REALLY careful in Mexico City and Querétaro, I let my guard down and made the mistake of taking a few sips of the house water at a local restaurant (they claimed it was purified) and over the next four days (and nights) was making hourly visits to the bathroom. Montezuma’s Revenge is real, my friends. Stick to bottled water ONLY and don’t even trust the ice cubes. Nuff said.

View More Images from our trip to Mexico

Written By DanPerezPhotography On July 29, 2019