We spent two and a half days in Seville and stopped by several of its major tourist attractions. One of those was the Plaza de España (“Spain Square”), a plaza in the Parque de María Luisa (Maria Luisa Park). The Plaza was built in 1928 and designed by the great Sevillian architect Aníbal González for the Ibero-American Exposition of 1929 (a world’s fair held in Seville from May 9, 1929 until June 21, 1930). González combined a mix of 1920s Art Deco and Spanish Renaissance Revival, Spanish Baroque Revival and Neo-Mudéjar styles to showcase Spain’s industry and technology exhibits.

The Plaza de España has been used as a filming location, including scenes for the 1962 film Lawrence of Arabia. The building was used as a location in the Star Wars movie series Star Wars: Episode II – Attack of the Clones (2002) — in which it featured in exterior shots of the City of Theed on the Planet Naboo. After more than 2 years under restoration, the Plaza de España was inaugurated on October, 2010. Before the works, its original shape was badly deteriorated because abandonment and vandalism. Some people visiting the square had the funny idea of taking home a souvenir and used to rip off part of the tiles or other ceramic ornaments. Today the Plaza de España mainly consists of Government buildings.

We spent a few hours there on a lovely December day and it was really hard to leave. There was a charm to this place that was undeniable. I had the new Fujifilm X-T3 and a few good lenses that I had rented for this trip so I’ll try to let the images speak for themselves. Enjoy… 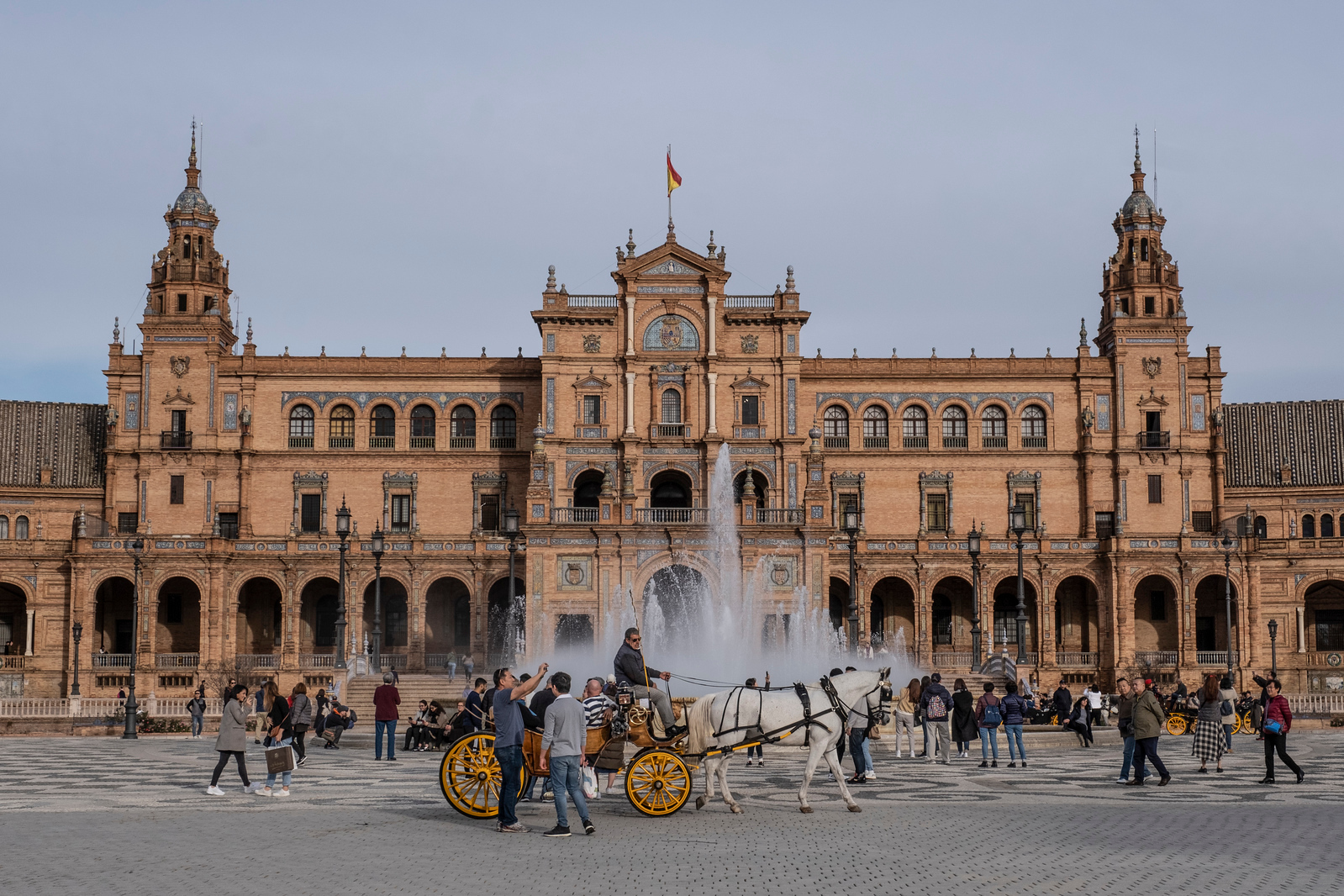 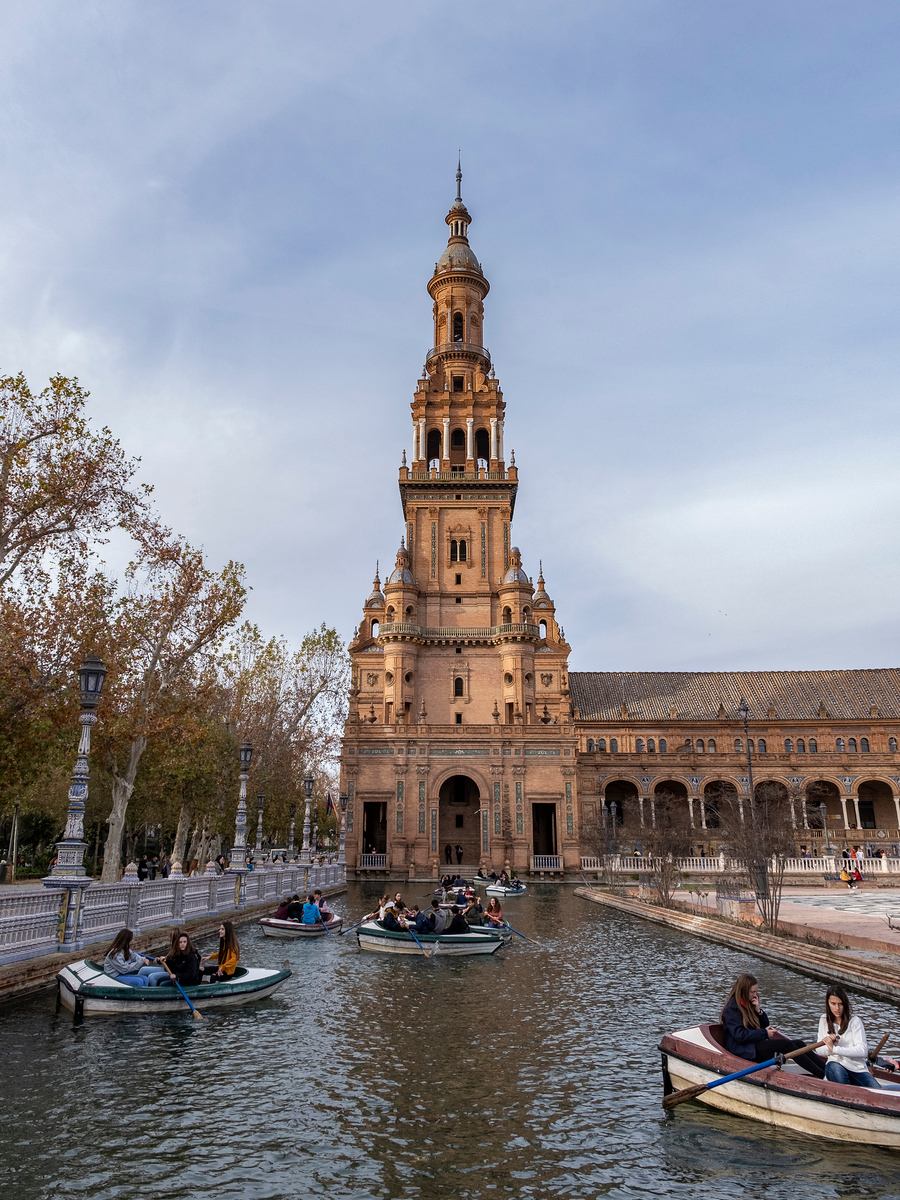 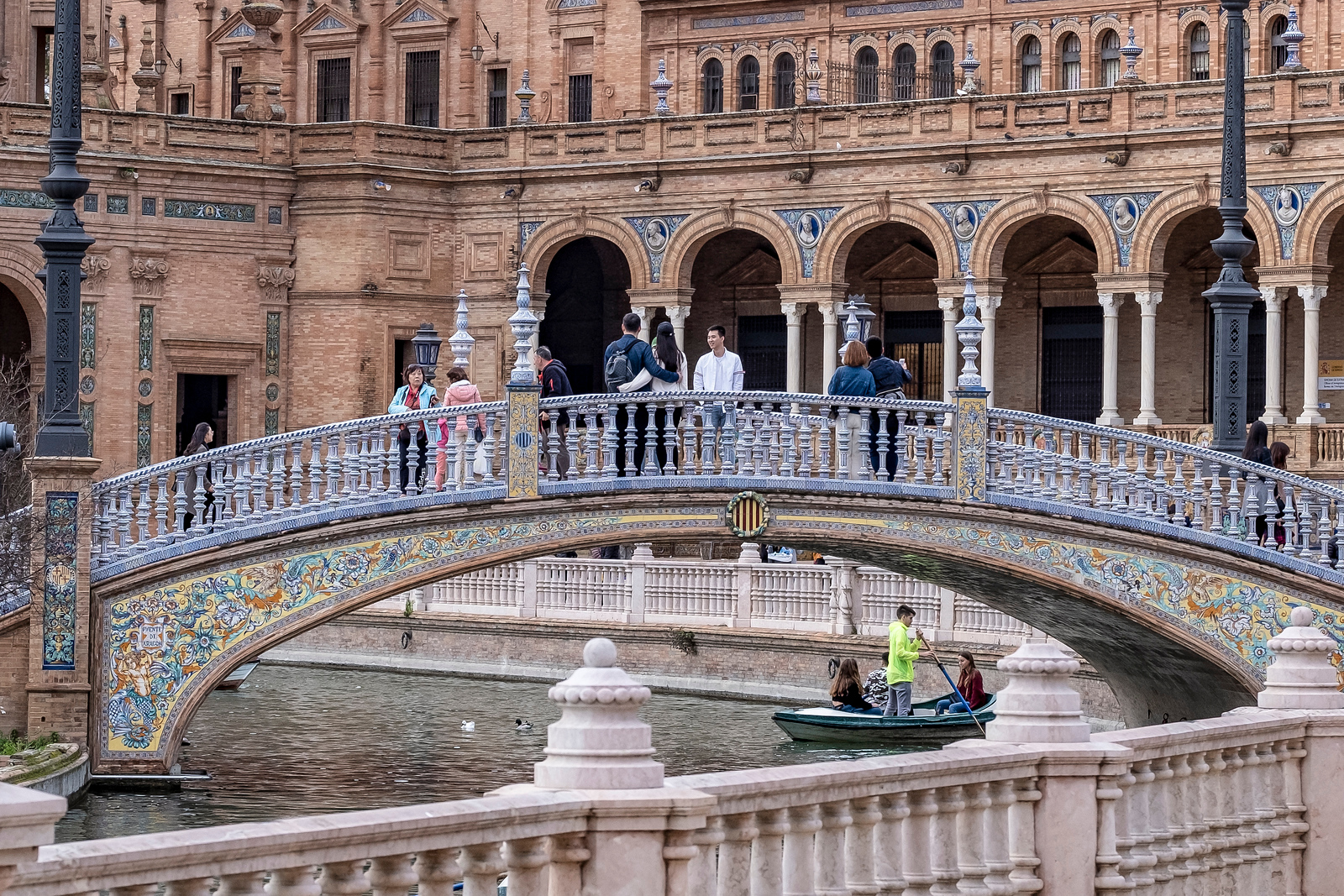 Built in the style of Renaissance Revival and Moorish Revival architecture, the whole building is surrounded by a moat, in which visitors can hire boats to gently row around. Elegantly curving over the moat are four bridges, each relating to the ancient Spanish kingdoms of Castile, Navarre, Aragón and León. 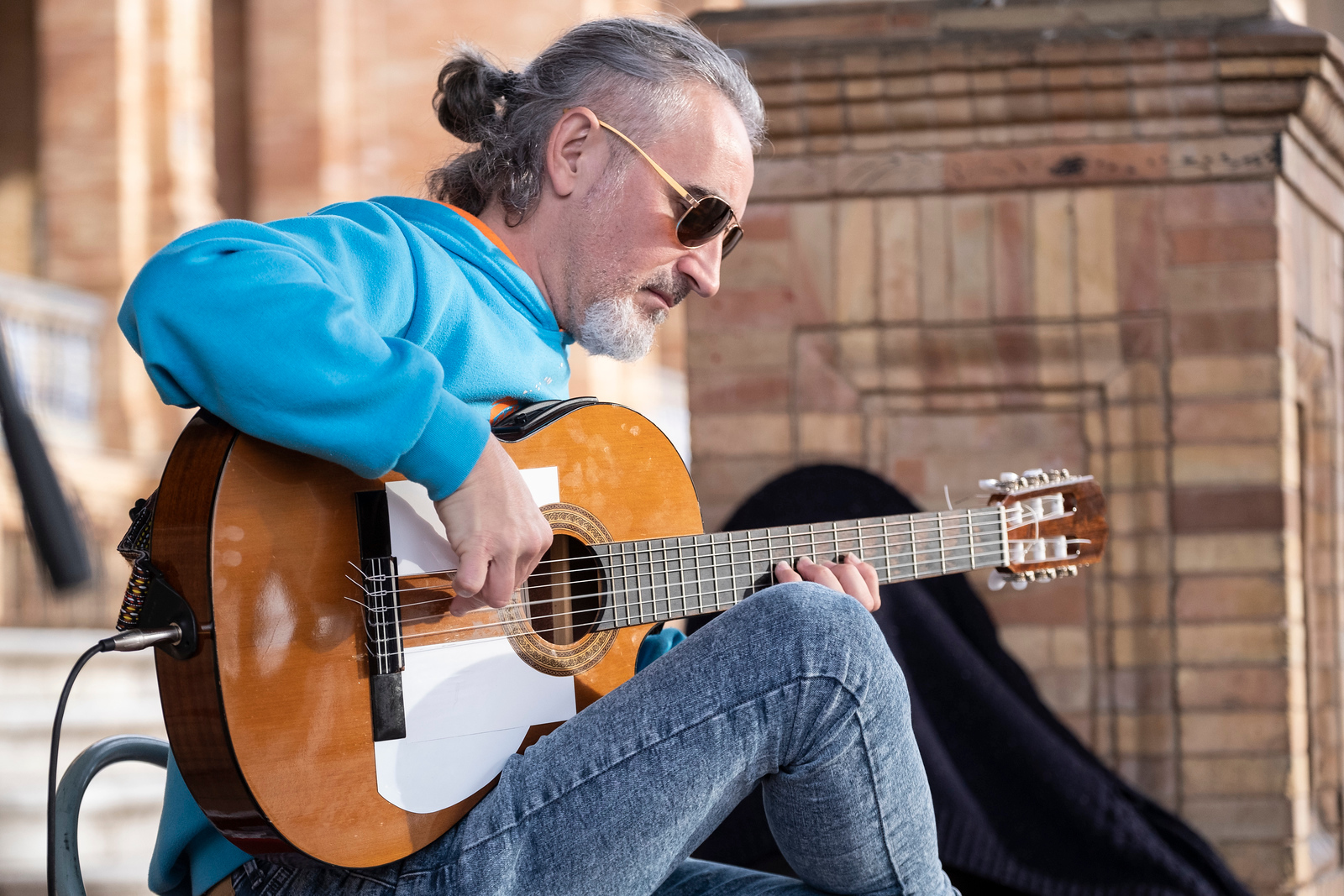 Street flamenco show at the Plaza was a special treat… 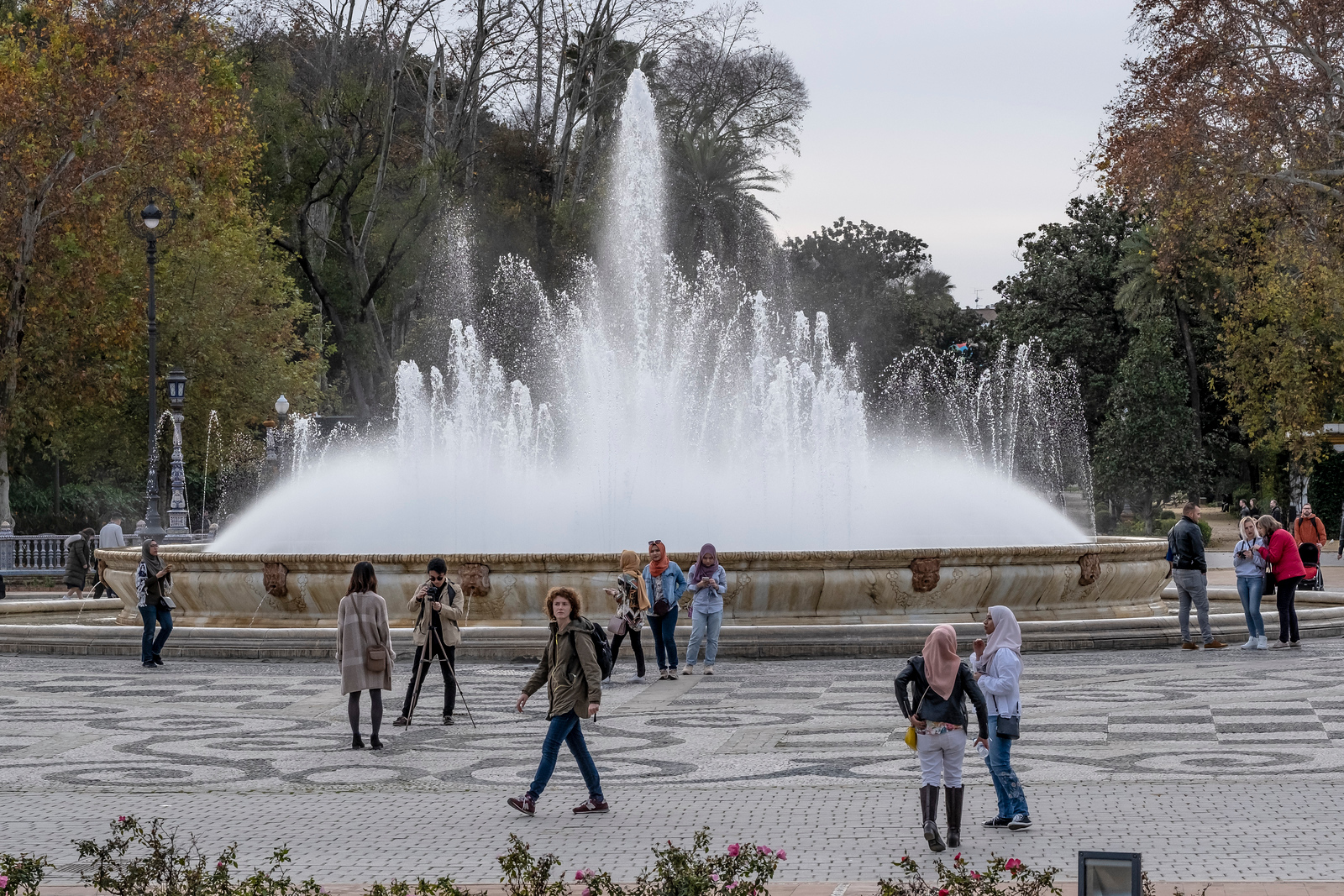 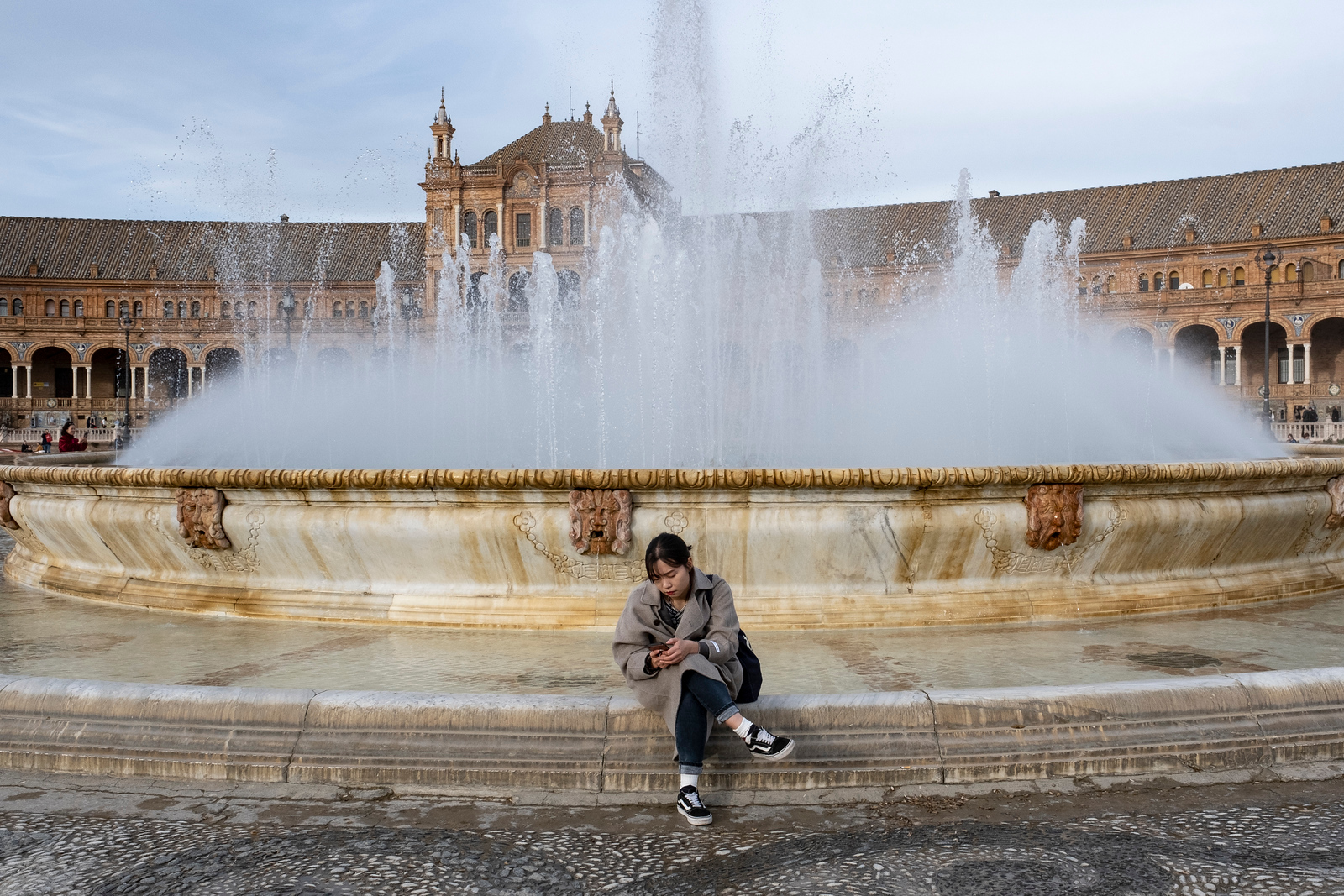 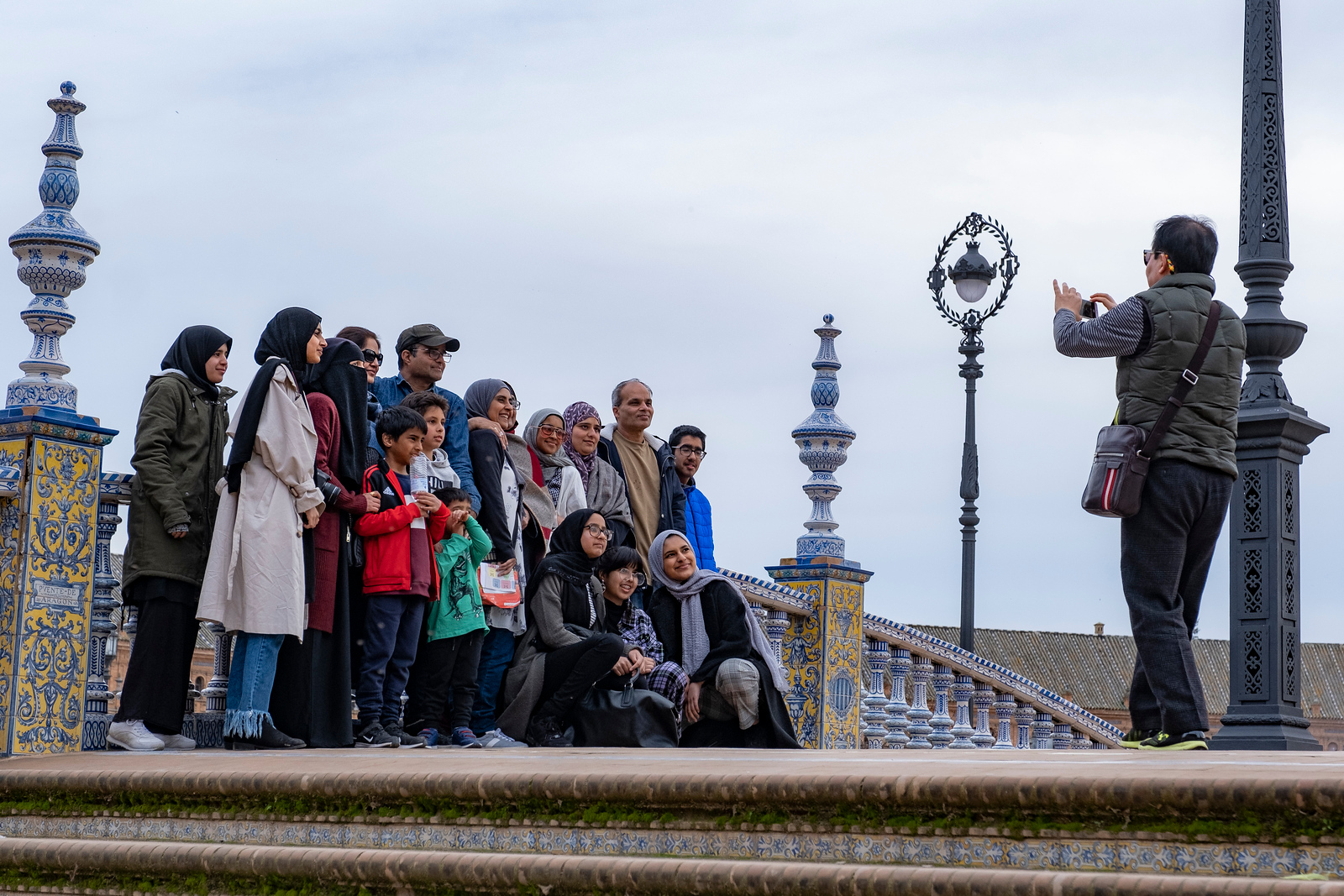 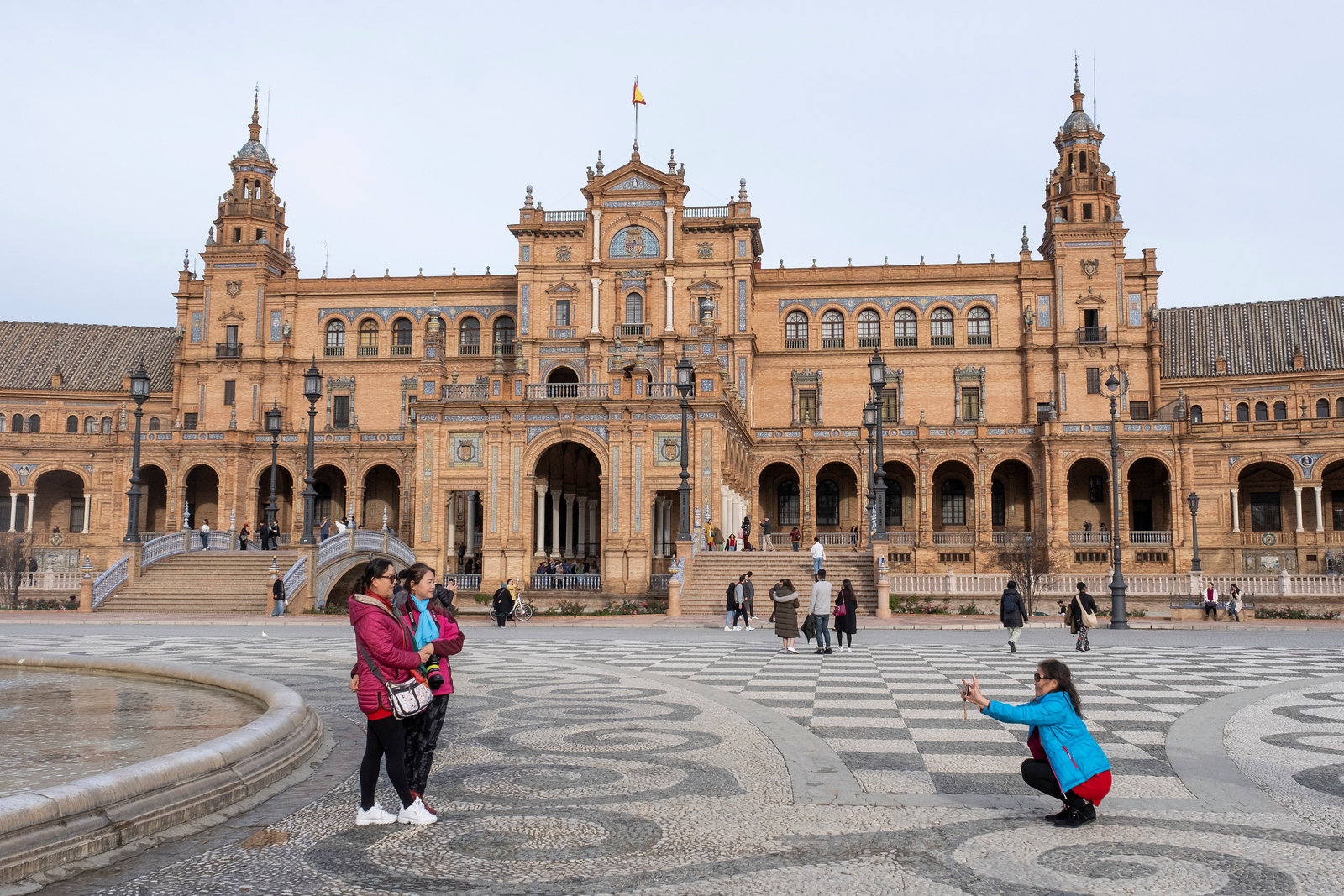 We weren’t the only ones taking pictures, the Plaza was made for selfies and photographs…

All along the wall by the canal are 48 alcoves with benches, one for each province of Spain, each with a relevant tableau and map, all designed on colourful azulejos (painted ceramic tiles).

My daughter and I. Yeah, we both loved this charming plaza… 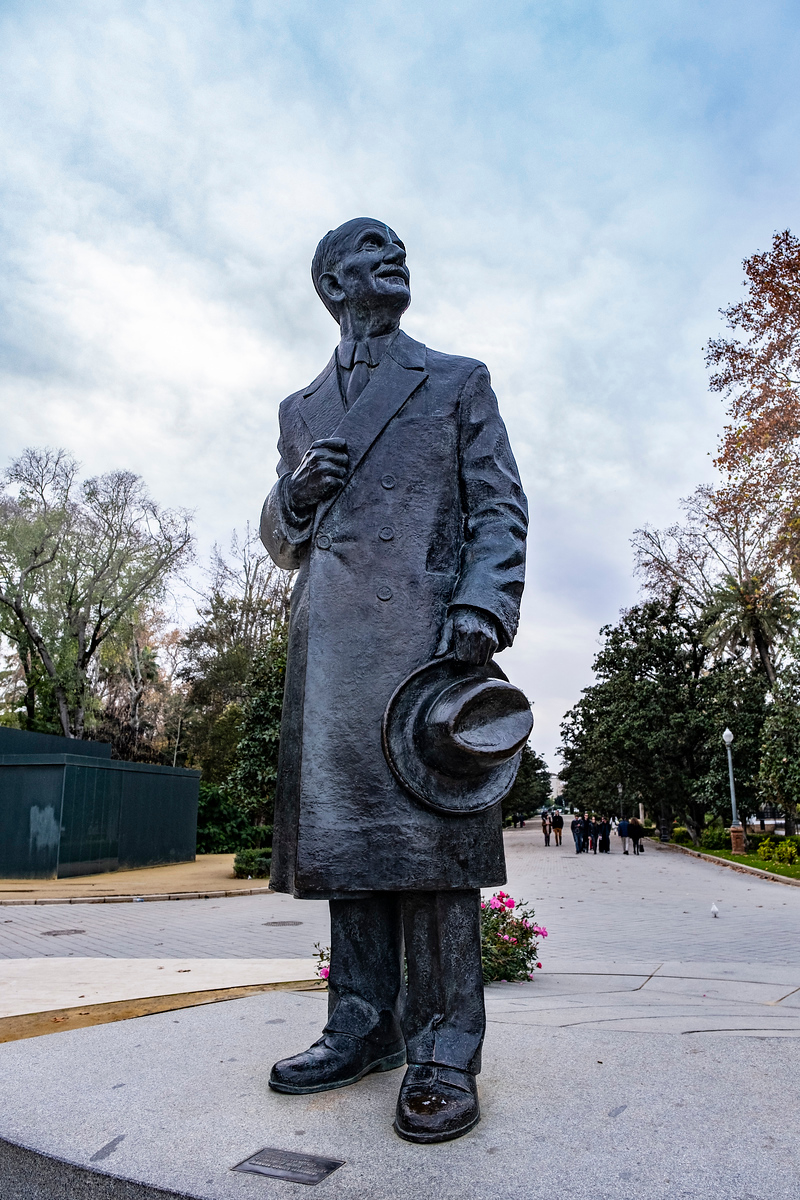 Just outside the entrance to the Plaza, a statue of architect Aníbal González, “The Man Who Built Seville” 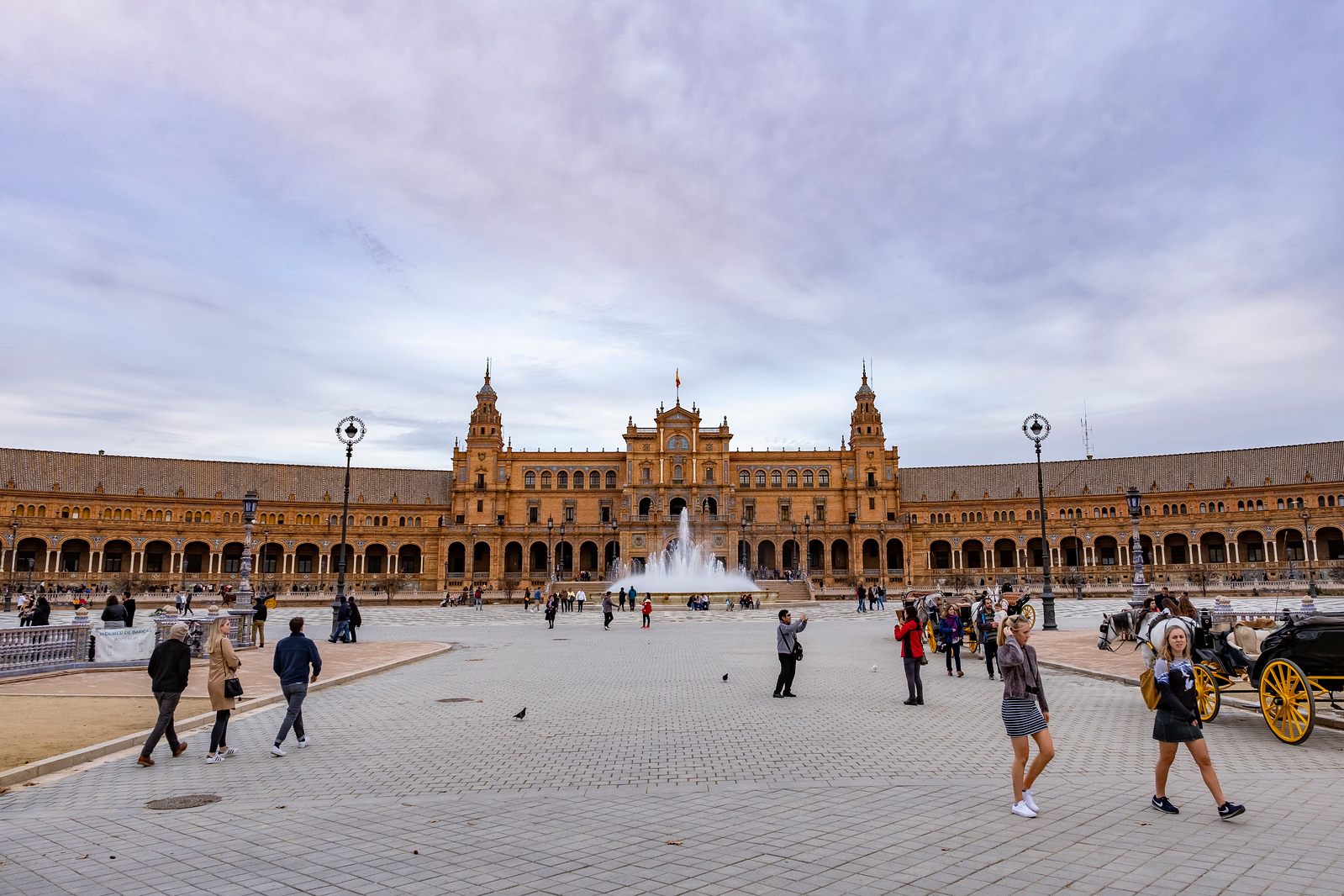 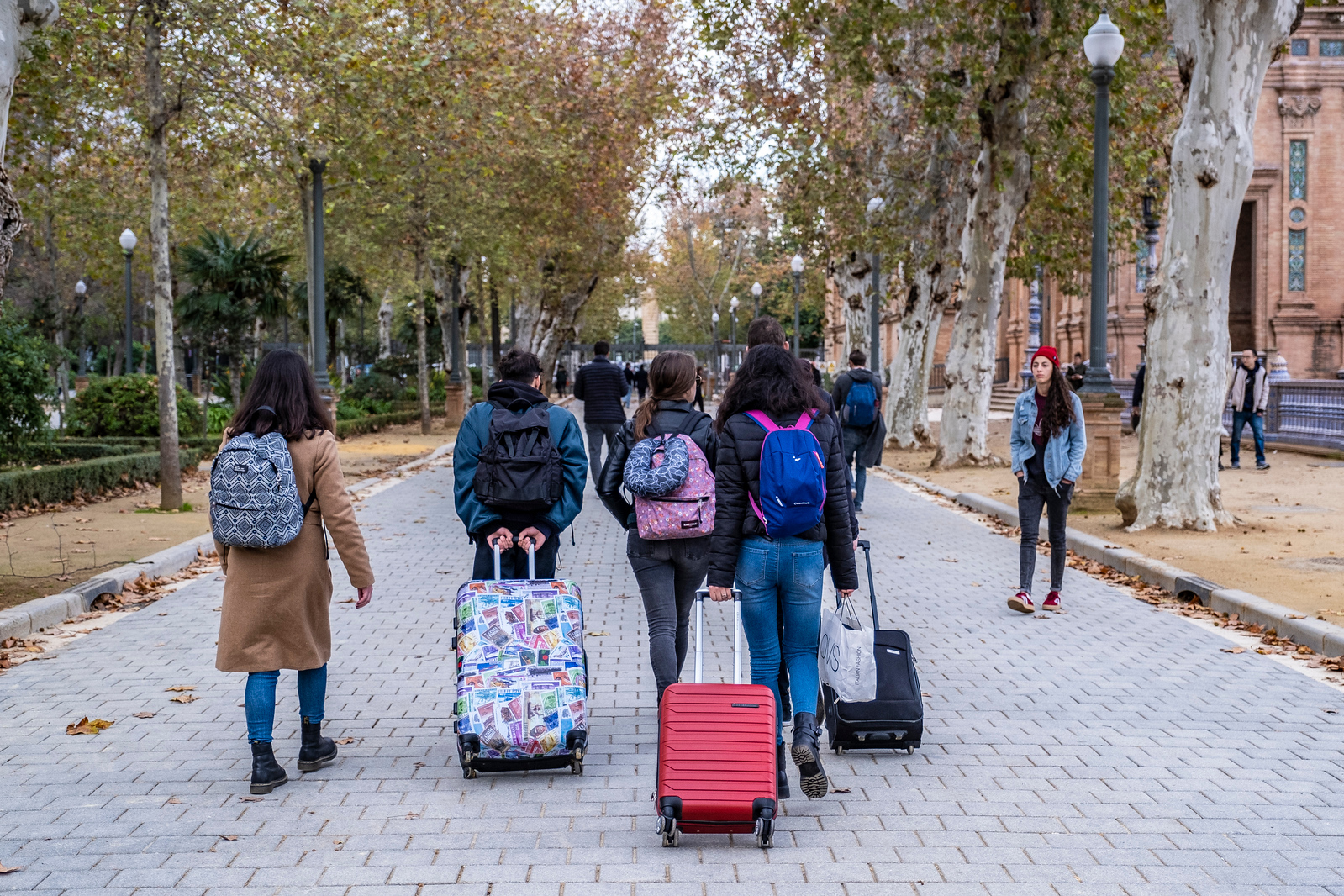 Soon it was time for us to get going but what a time we had hanging out at the Plaza de España. And like I said in my previous posts, December is a lovely time to visit Seville. Weather was low-to-mid 70s during the day, jacket weather at night; and the swarm of tourists you’ll find in the summer months? Not in December. Visit their official tourism website to learn more www.visitasevilla.es/en

Special thanks to the folks at Fujifilm for the great rental price on the Fujifilm X-T3. This is a wonderful camera for traveling. Light, comfortable to hold, great in low light with a snappy autofocus. Besides the camera, I had the 16-55 f/2.8, 56mm f/1.2, 16mm f/1.4, and 50-140mm f/2.8 lenses. Also grateful for my Lowepro SlingShot 102 Camera Bag which has been my faithful companion for the past 7+ years, and the Joby GorillaPod 3K Flexible Mini-Tripod.

I also gotta tip my hat to my KEEN® shoes (I have the Finlay Oxfords). I mean, walking on cobblestone streets all day is tough on your feet. I had brought along a pair of Skechers Memory Foam Shoes as well as my Adidas Cloudfoam sneakers (which I wore on this particular day and after several hours of walking the Plaza, my feet were killing me). Neither of them even came close to my KEEN® shoes as far as comfort. If you plan to walk around Europe’s rough cobblestone streets, these shoes won’t let you down. Nuff said.

Written By DanPerezPhotography On February 28, 2019

One Tamarac Multi-Cultural Festival (In Pictures)