In my last post, I shared a set of photographs from the Plaza de España (view the images HERE) and today, I’ll be taking you inside the spectacular Seville Cathedral.

The Catedral de Santa María de la Sede, better known as Seville Cathedral, is the largest Gothic cathedral in the world and the third-largest Christian temple in the world (behind St. Peter’s in Rome and Catedral Metropolitana Nossa Senhora Aparecida in Brazil). The total area covers 124,000 square feet while the central nave (the longest in Spain) rises to a height of 138 feet. The cathedral stands on the site of what was – in the 12th century – the Great Mosque. Today, the only part which remains of this structure is the minaret, also known as “La Giralda” due to the weather vane added to the top in the 16th century. It was converted into a Christian church when the city was conquered by Ferdinand III of Castile in 1248.

The cathedral’s construction lasted over a century(!), from 1401 to 1506. It is said that when the plans were drawn up, church elders stated, “Hagamos una iglesia tan hermosa y tan grandiosa que los que la vieren labrada nos tengan por locos.” (Let us build a church so beautiful and so magnificent that those who see it finished will think we are mad). The Seville Cathedral (and La Giralda) was registered in 1987 by UNESCO as a World Heritage Site.

My daughter and I spent several hours exploring this remarkable cathedral as well as La Giralda on a gloriously sunny day during our stay in Seville. I was armed with the new Fujifilm X-T3 and a few good lenses that I had rented for this particular trip. It’s a fantastic camera for travel and if you’re coming from a Micro Four Thirds system like I was, an excellent camera for dimly lit cathedrals. I’ll just let the images speak for themselves. Enjoy… 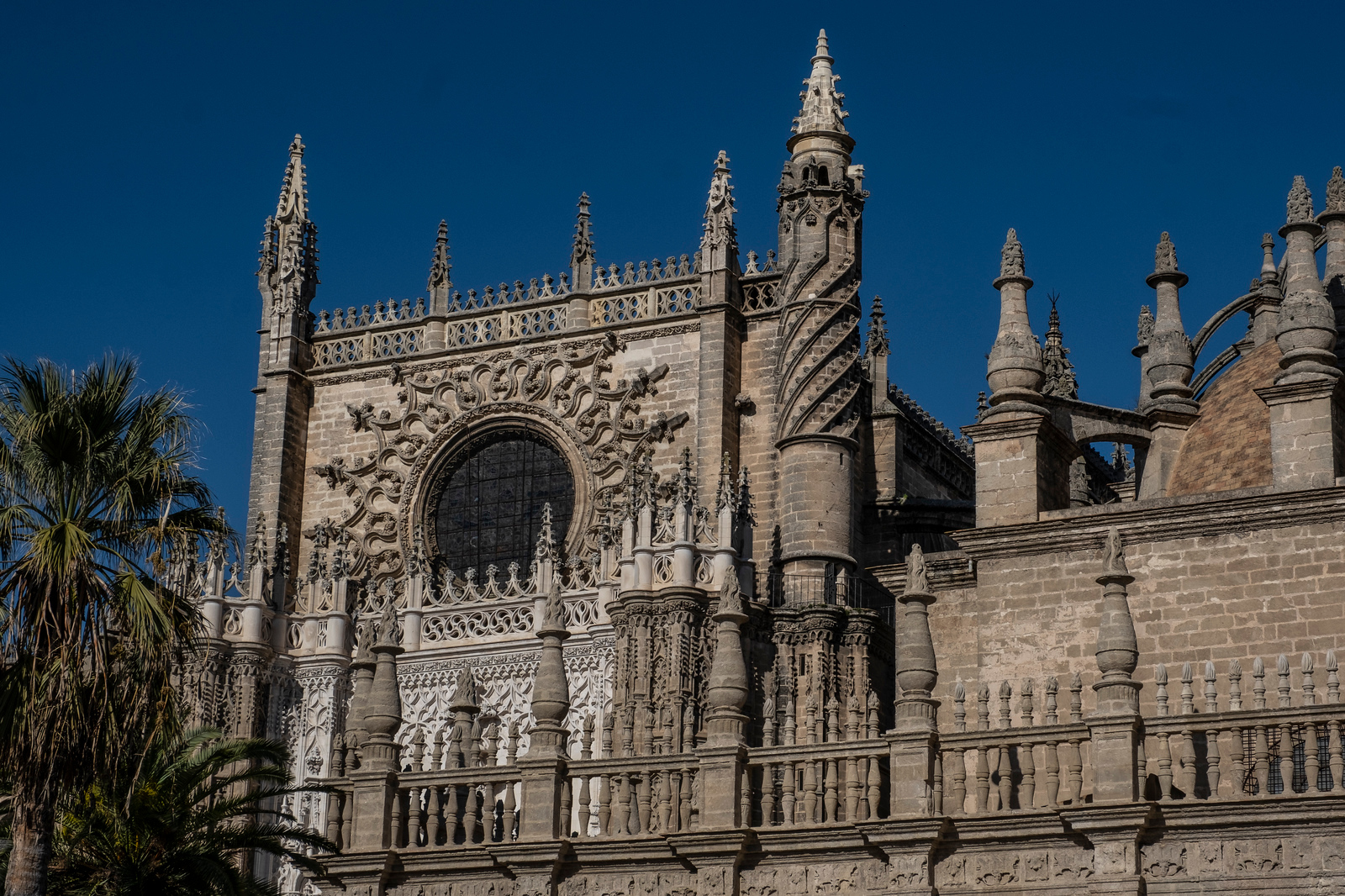 The Seville Cathedral has fifteen doors on its four facades. Spanish artist Ricardo Bellver was commissioned by Cardinal Cienfuegos y Jovellanos to carve the relief of the Assumption over the Puerta de La Asunción (Main Door or Door of Assumption). It was executed between 1877 and 1898. 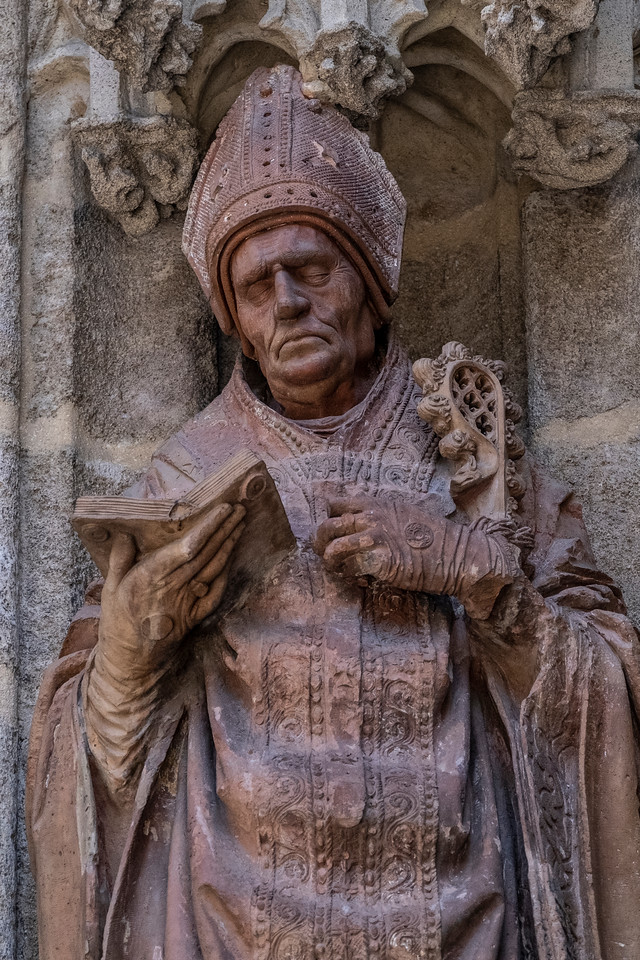 The Puerta del Bautismo (Gate of Baptism) was built in the 15th century and decorated with a scene depicting the baptism of Jesus, created by the workshop of Lorenzo Mercadante of Britain. It contains sculptures of the brothers Saint Isidore and Saint Leander and the sisters Saints Justa and Rufina, by Lorenzo Mecadante, also a series of angels and prophets by the artisan Pedro Millán. 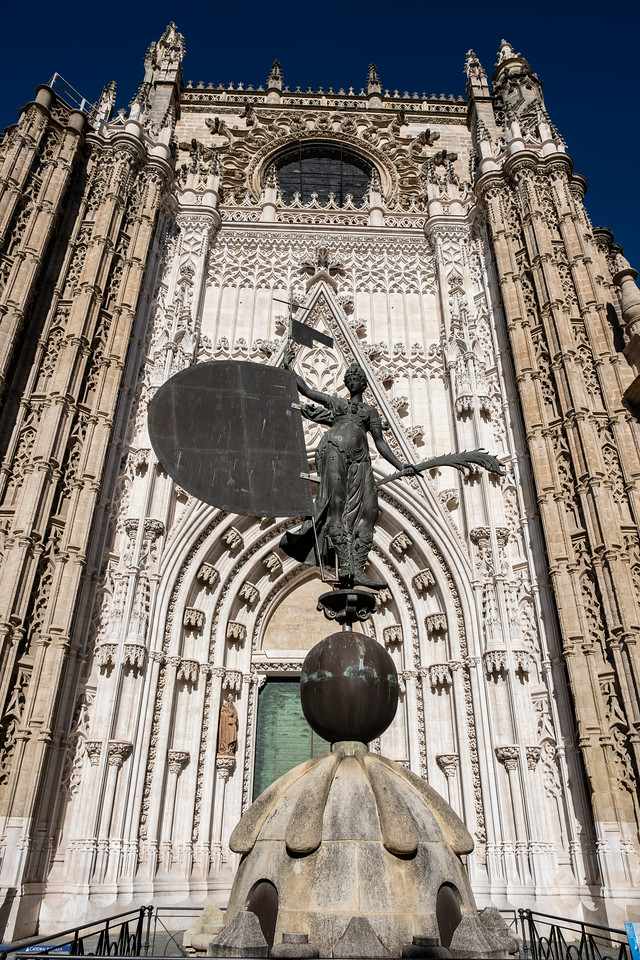 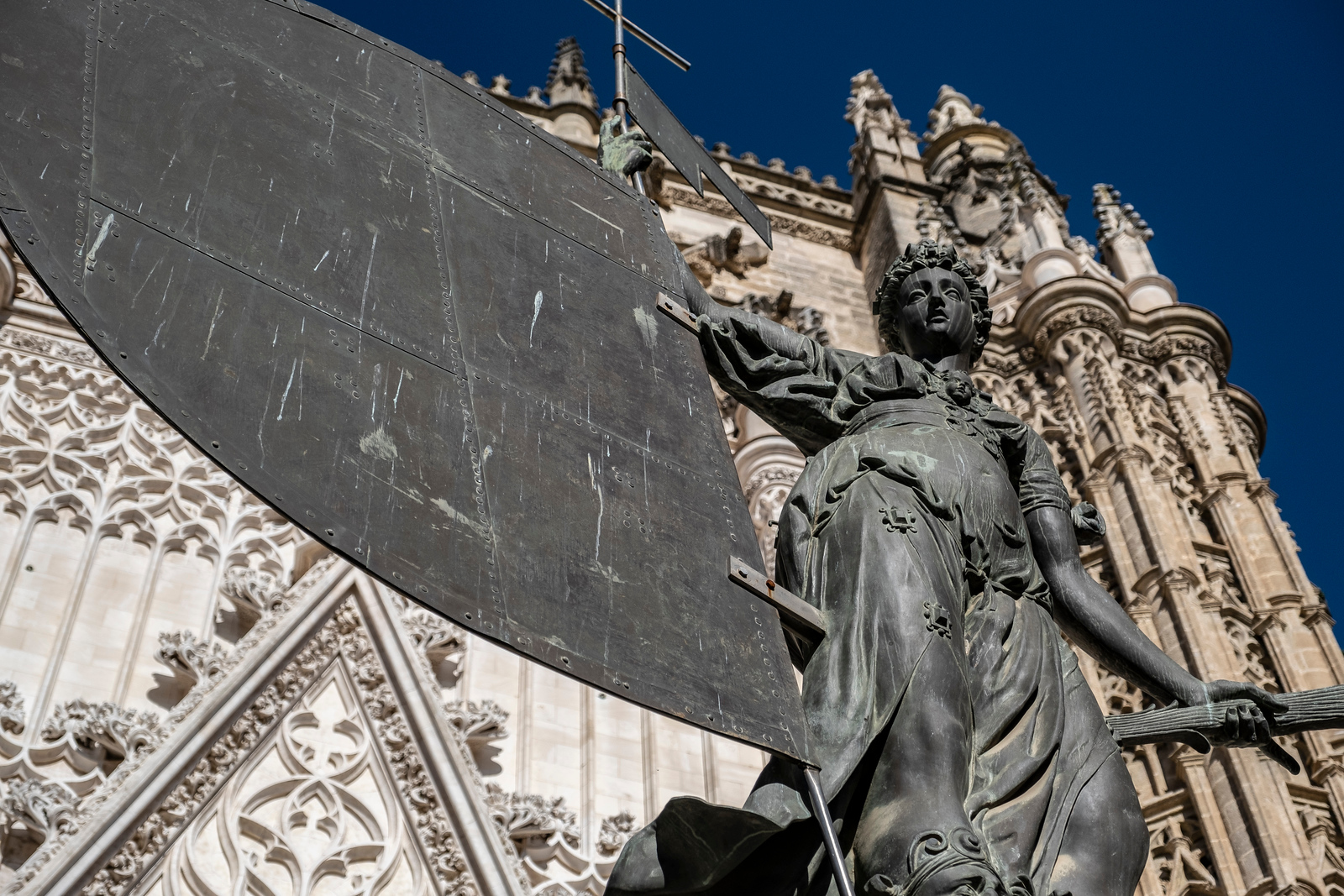 The Puerta del Príncipe (Prince’s Gate) features an atrium presided over by the Giraldillo (a statue representing faith which is a replica of the smaller weather vane on top of the Giralda tower – more on that later). The design began with a project by Spanish architect Adolfo Fernández Casanova, whose plaster model was already made in 1885, but the works did not start Until January of 1887. It was made with very white stone coming from quarries of Monóvar (a city located in southeast of Spain) and was finished in 1901. 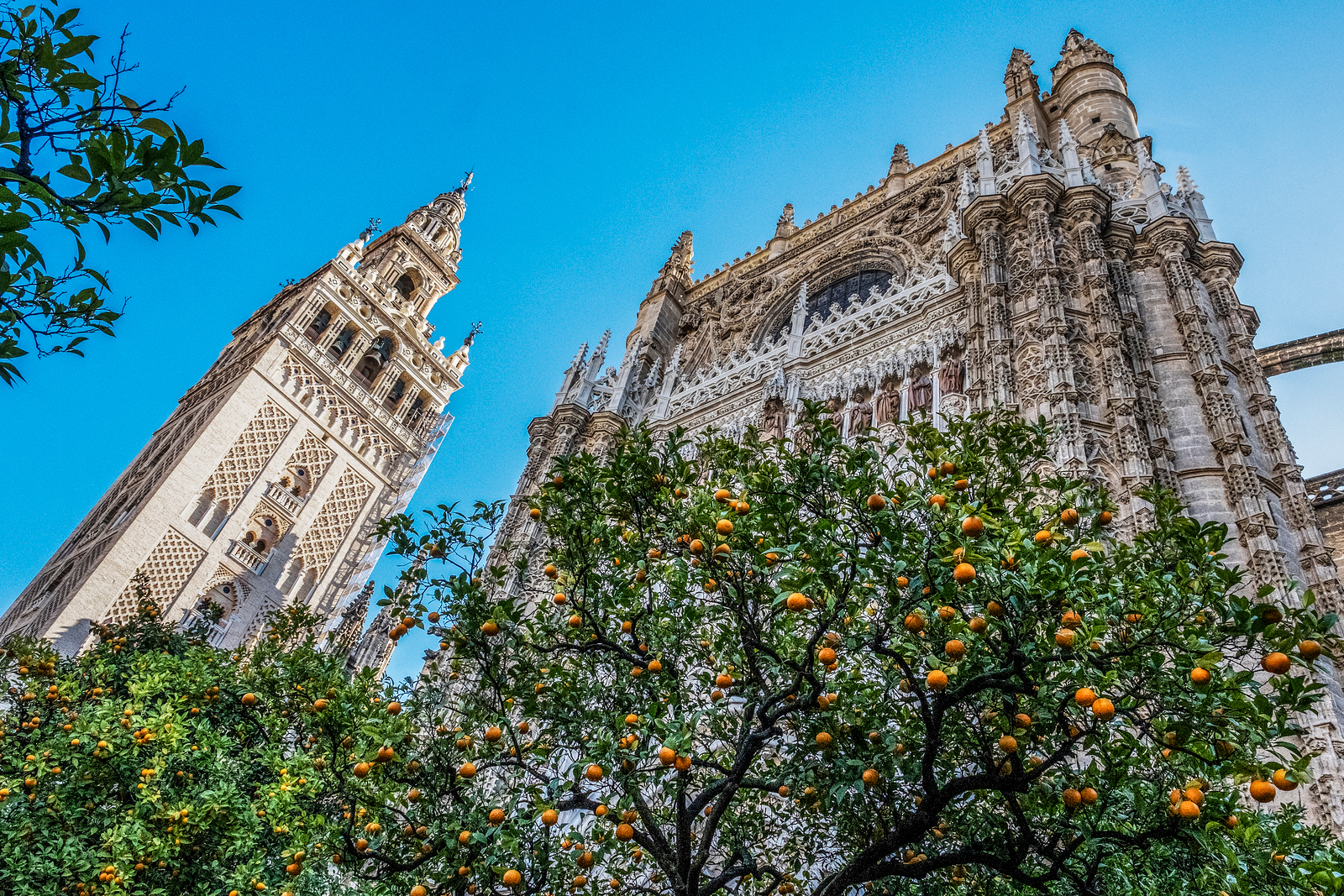 Alongside the Giralda, you’ll find the Puerta de la Concepción (Door of the Conception) which opens onto the Patio de los Naranjos (Court of the Oranges, the original mosque’s main courtyard) and is kept closed except on festival days. It was designed by Demetrio de los Rios and finished by Adolfo Fernandez Casanova in 1895. 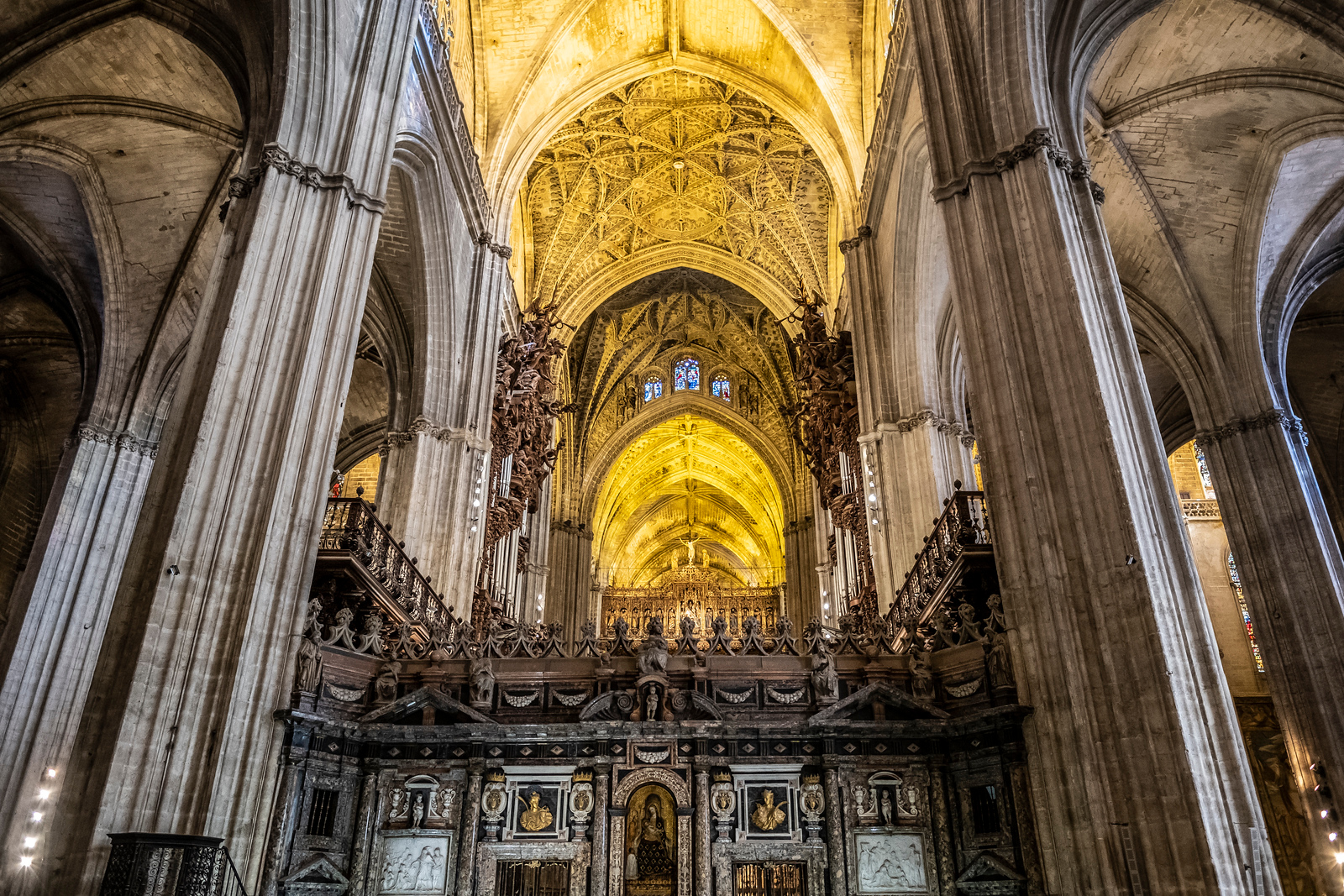 The huge interior of the cathedral, with a central nave and four side aisles, is lavishly decorated in gold. Illuminating the interior are 75 stained-glass windows dating from the 16th to the 19th centuries. The oldest windows are the work of Cristóbal Alemán and Arnao de Flandes… 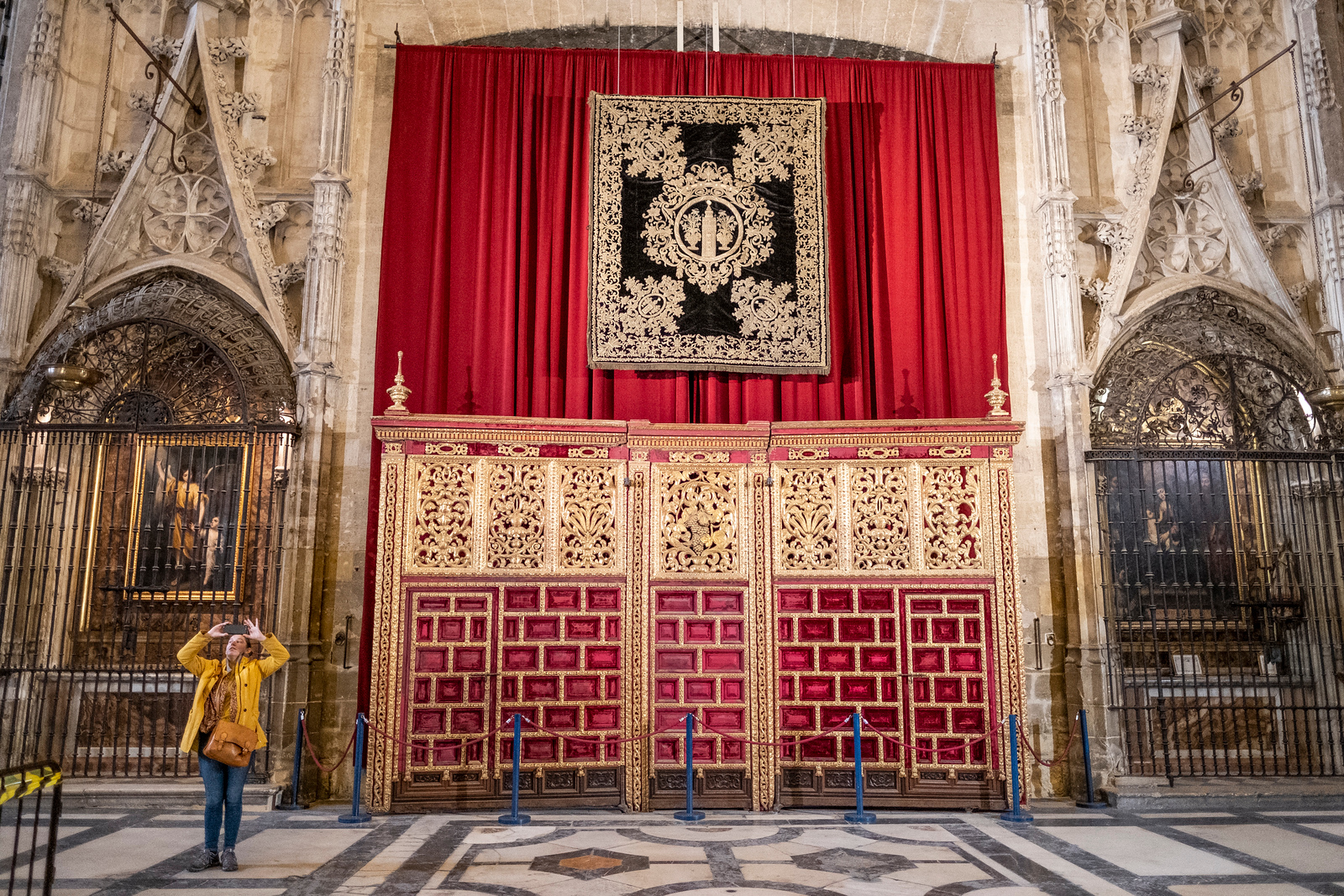 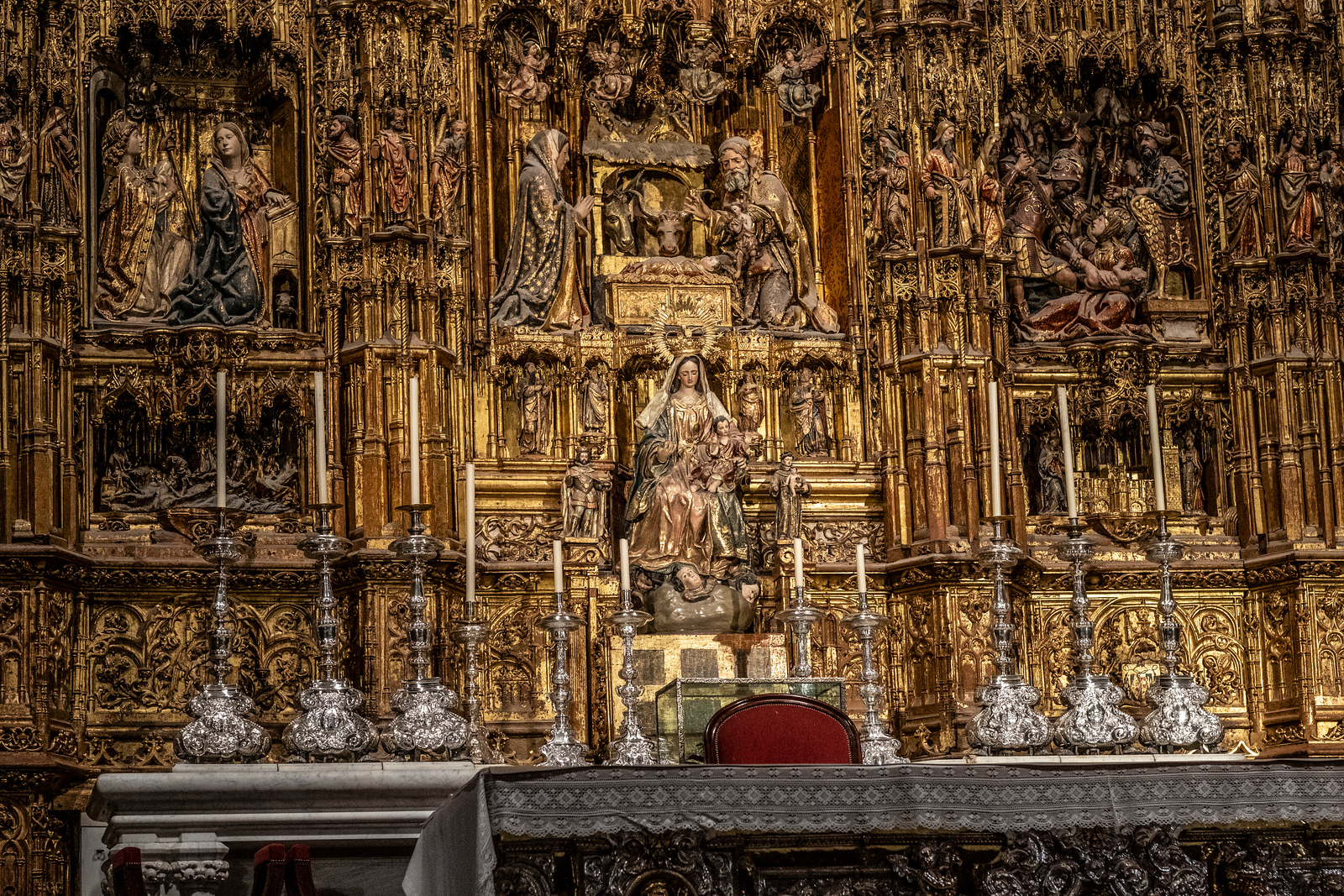 Images from inside the cathedral including the monumental Capilla Mayor gilded with real gold brought back from the Americas. It was the life’s work of German artist Fleming Pieter Dancart and is considered the largest and richest altarpiece in the world. La capilla de la Virgen de la Antigua (Chapel of the Virgin of the Antigua) dates back to the fifteenth century. According to legend, before the conquest of Seville by the Christians, an angel led King San Fernando into the main mosque of the city, where behind a wall that became transparent, he could see the image of the Virgin of the Antigua that remained there hidden for centuries. A few days later the Muslim forces surrendered and San Fernando entered triumphantly into the city on December 22, 1248.

The Chapel of Saint Anthony contains the painting of “The Vision of St. Anthony” (1656) by Bartolomé Esteban Murillo. In November 1874, it was discovered that thieves had cut out the portion depicting Saint Anthony. Then, in January 1875, a Spanish immigrant attempted to sell the same fragment to a New York City art gallery. The man stated it was a complete original by Murillo, Saint Anthony being one of the artist’s favorite subjects. The owner of the gallery, Hermann Schaus, negotiated a price of $250 and contacted the Spanish consulate. Upon securing the sale, Schaus sent it to the Spanish Consulate, which shipped it to Seville via Havana and Cadiz. 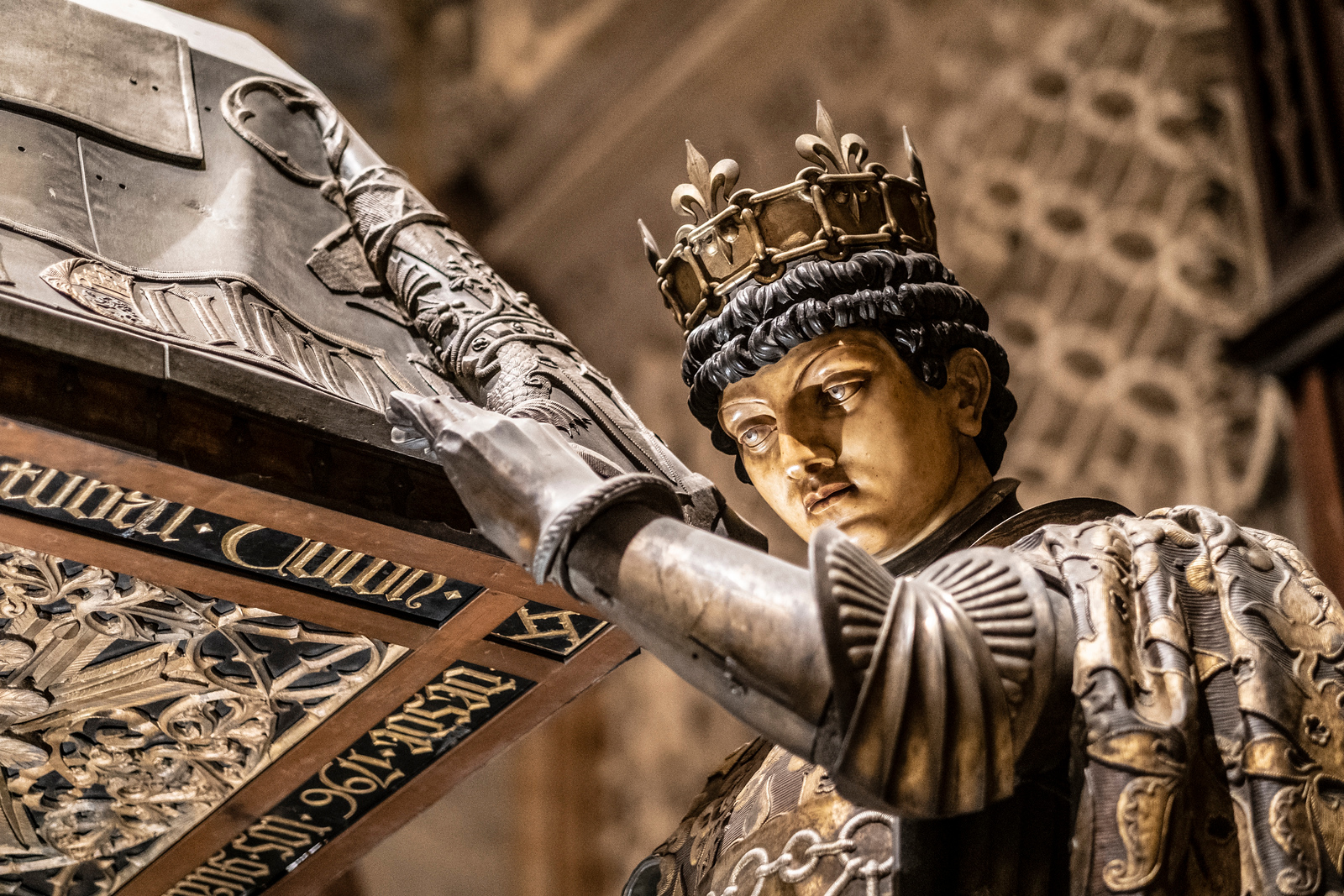 The Tomb of Christopher Columbus is one of the main attractions of the cathedral for visitors, housing the remains of the controversial explorer who died in poverty in Valladolid. Sculpted by Arturo Melida, it was designed in the Late Romantic style and is held aloft by four huge allegorical figures representing the kingdoms of León, Castile, Aragón and Navarra. Columbus was originally buried in the cathedral of Havana, on the island he had “discovered” on his first voyage in 1492. But during the upheavals surrounding the Cuban revolution in 1902, Spain transferred the remains to Seville.

In the Sacristía de los Cálices (Sacristy of the Chalices ), Francisco de Goya’s painting of the Sevillan martyrs, Santas Justa y Rufina (1817), is the centerpiece of the room. 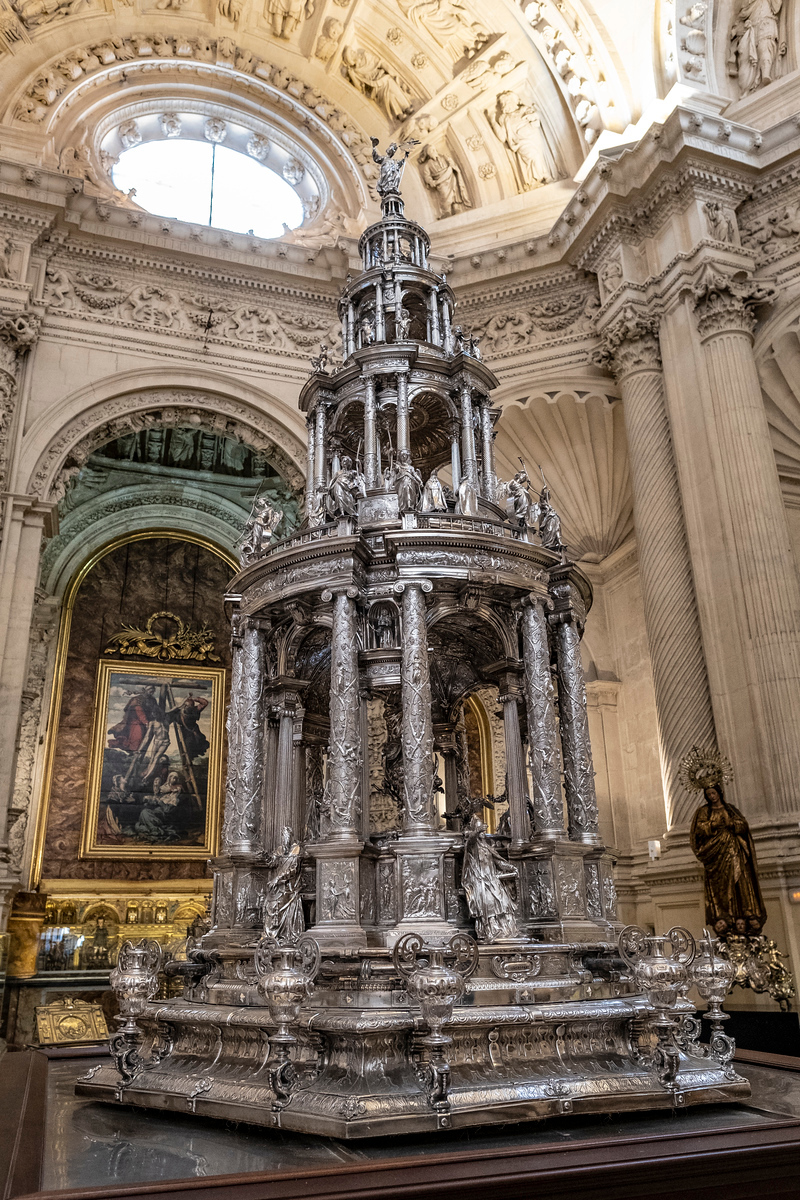 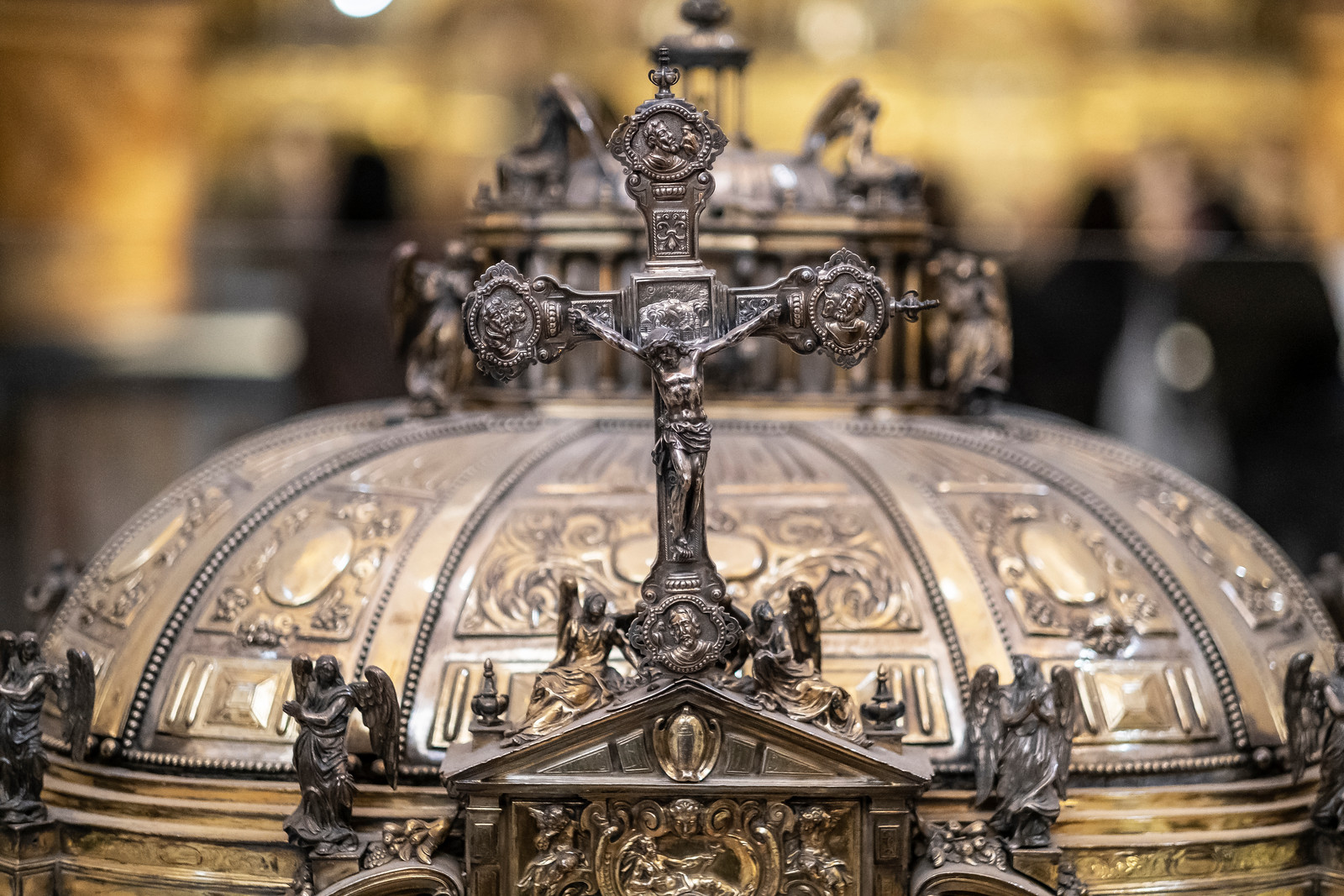 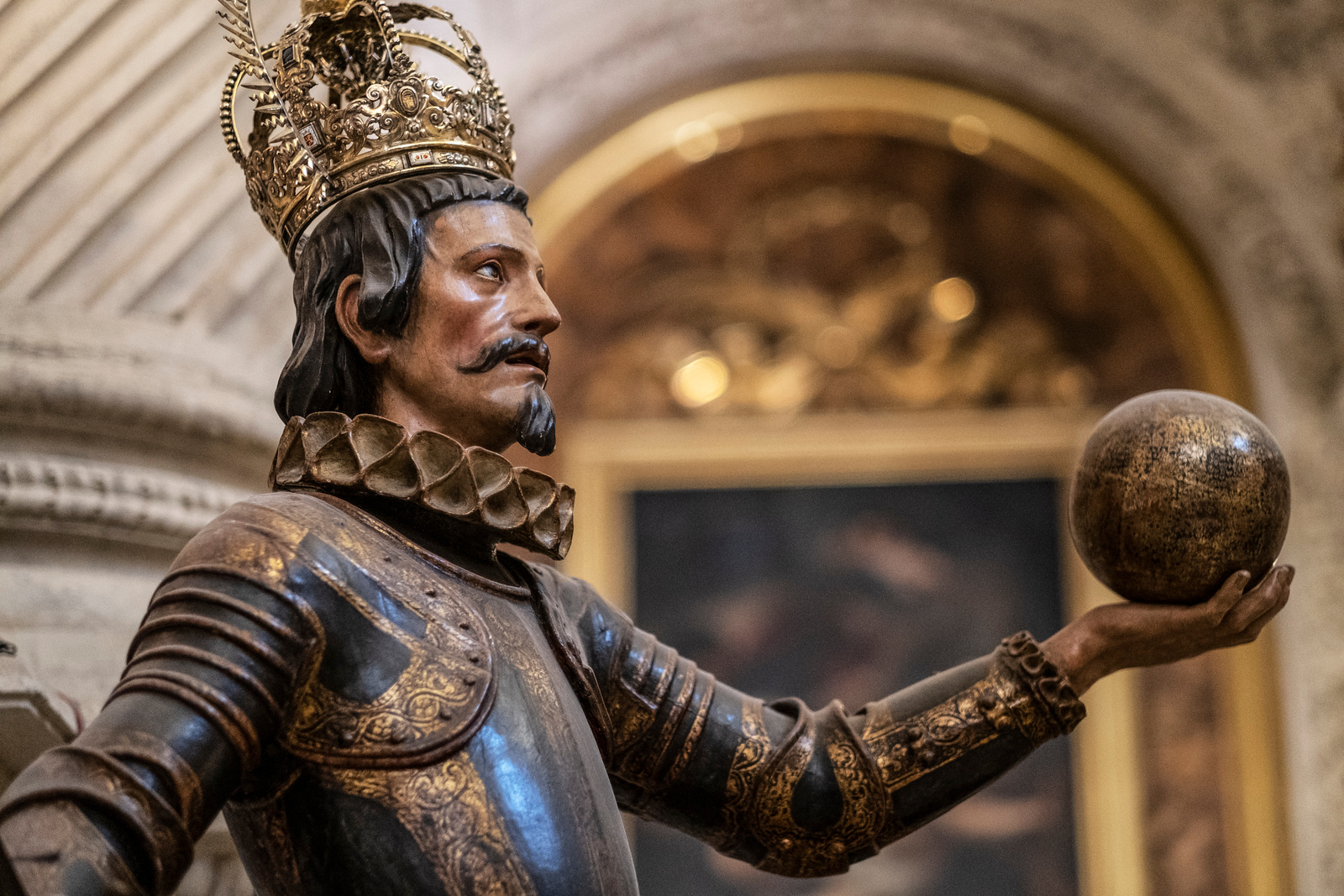 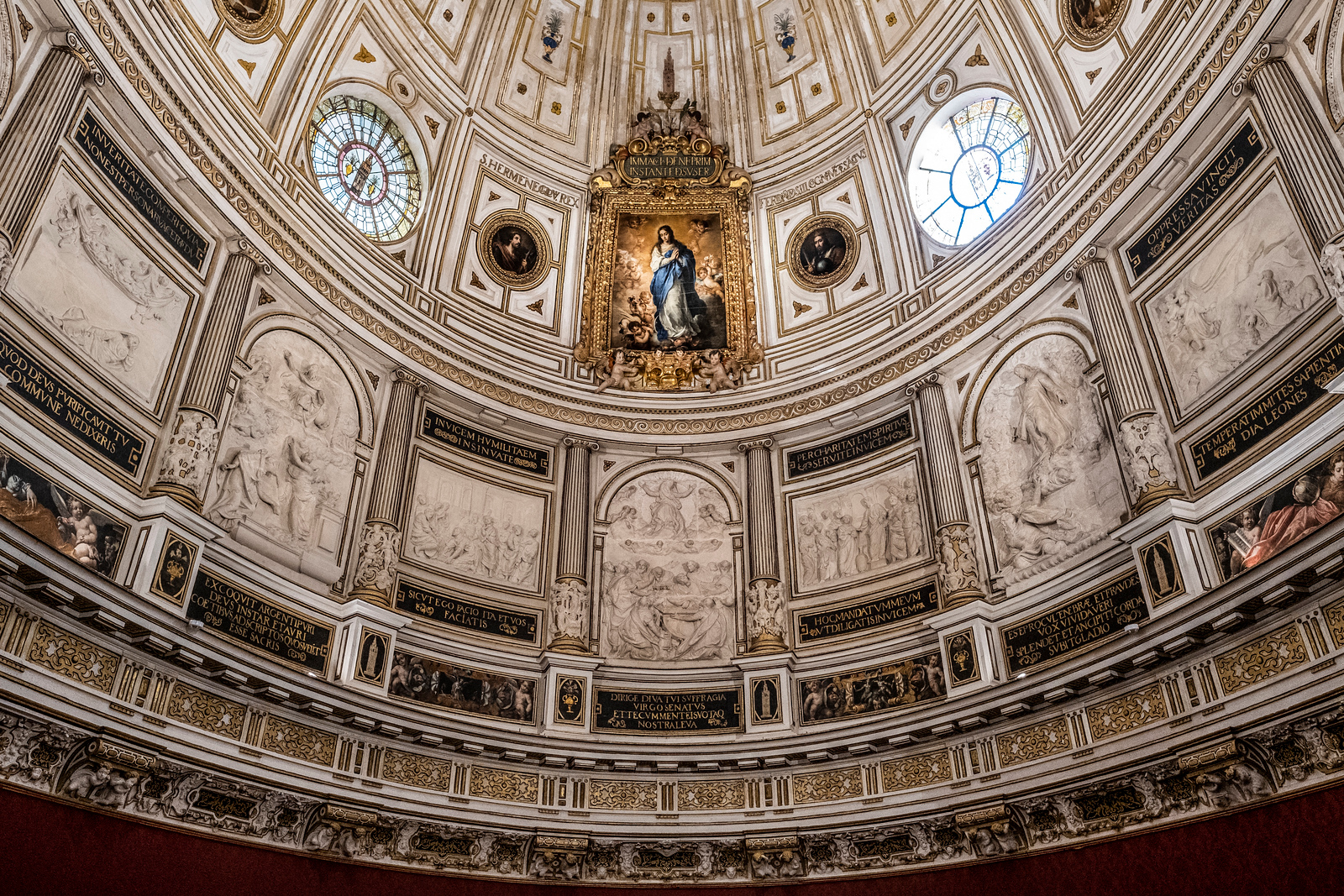 As you walk through the cathedral, you’ll come across several stunning chambers… 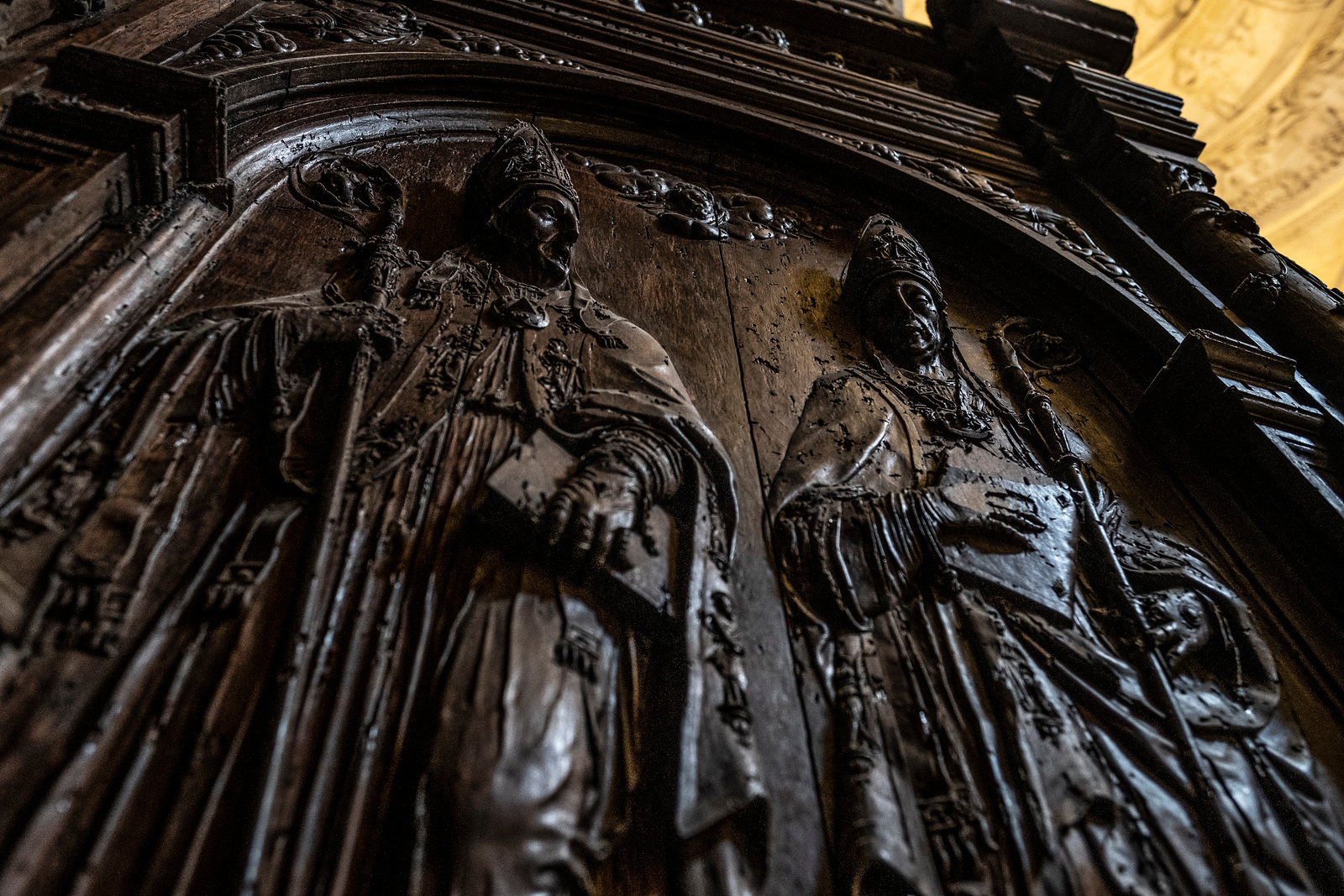 Even the doors to the smaller chapels and chambers were beautifully adorned. 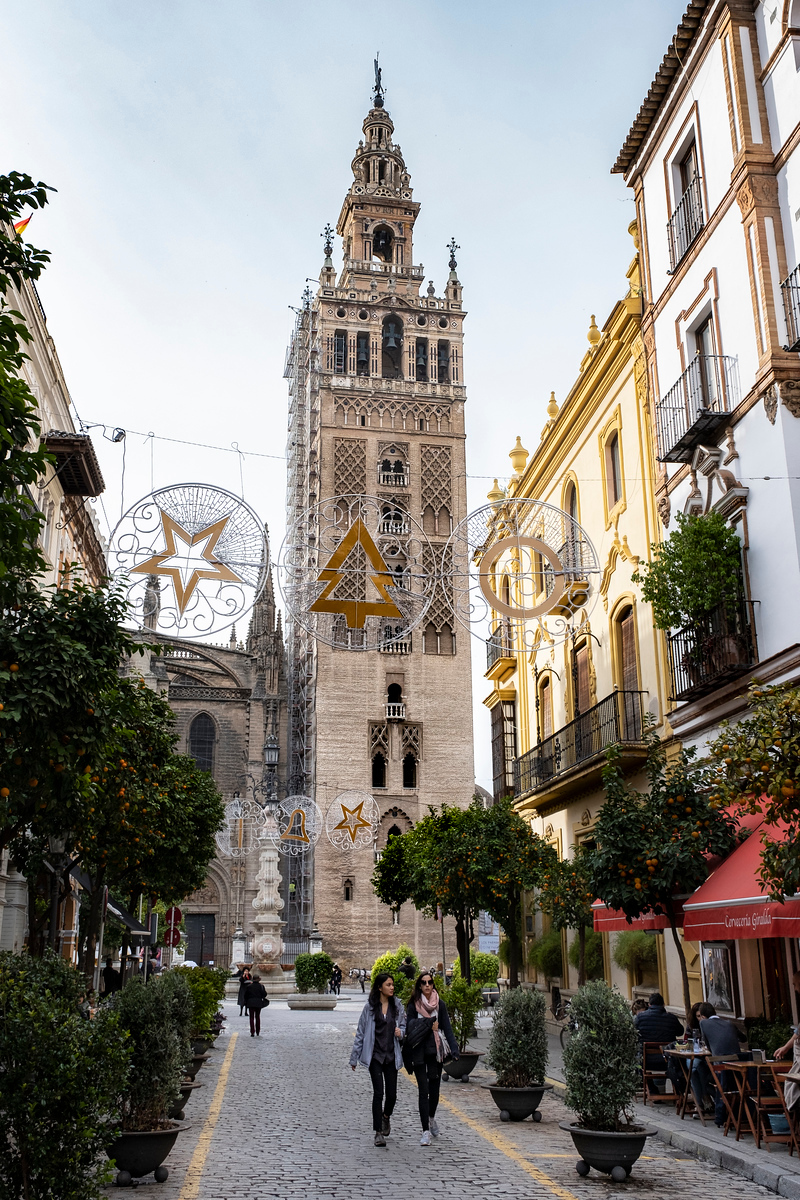 An icon of Seville for centuries, the magnificent Giralda was the tallest building in the city for over 800 years, dominating the skyline at over 330 feet. Originally built in 1195 as the minaret of the Aljama mosque, it is now the belltower of the cathedral, and is recognized (along with the cathedral) as World Heritage by UNESCO. It was used both for calling the faithful to prayer (the traditional function of a minaret) and as an observatory. The Giralda was highly venerated by the Moorish rulers, who wanted to destroy the minaret before the Christian conquest of the city in 1248, rather than have it used for a religion other than Islam. That idea was quickly abandoned when they were threatened by King Alfonso X that “if they removed a single stone, they would all be put the sword”. You can climb up to the bell chamber via a series of 35 gently inclining ramps for a remarkable view of the city and a bird’s eye view of the Gothic details of the cathedral’s buttresses and statuary. 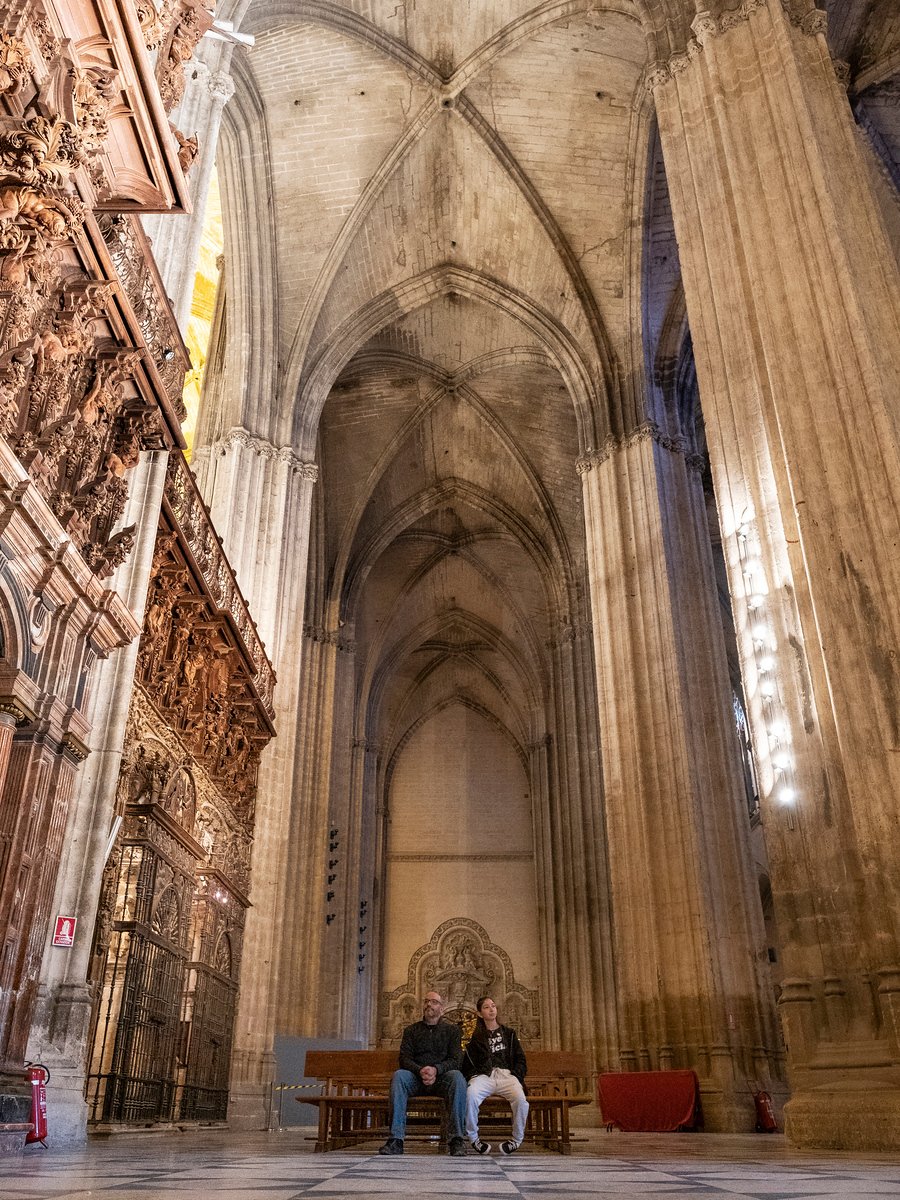 The Seville Cathedral is a must-see attraction not only if you’re visiting Seville but Spain’s beautiful Andalucía region. My daughter and I absolutely loved it. And like I said in my previous posts, December is a lovely time to visit Seville and southern Spain. Weather was low-to-mid 70s during the day, jacket weather at night; and the swarm of tourists you’ll find in the summer months? Not in December. Visit the city of Seville’s official tourism website to learn more www.visitasevilla.es/en

Special thanks to the folks at Fujifilm for the great rental price on the Fujifilm X-T3. This is a wonderful camera for traveling. Light, comfortable to hold, great in low light (especially in dimly lit cathedrals!) with a snappy autofocus. Besides the camera, I had the 16-55 f/2.8, 56mm f/1.2, 16mm f/1.4, and 50-140mm f/2.8 lenses. Also grateful for my Lowepro SlingShot 102 Camera Bag which has been my faithful companion for the past 7+ years, and the Joby GorillaPod 3K Flexible Mini-Tripod.

Written By DanPerezPhotography On March 4, 2019