Hello, again. I’m back with another series of images from my recent eight-city trip to Spain with my daughter (if you’re just joining us, you can catch up on things at the bottom of this post). We’re staying in Seville where in my last post, we visited the Seville Cathedral. For this final post in Seville, we’re gonna walk right across the street from the Seville Cathedral to the Alcázar of Seville, a royal palace built for the Christian king Peter of Castile. It was built by Castilian Christians on the site of an Abbadid Muslim residential fortress destroyed after the Christian conquest of Seville in 1248. It is the oldest royal palace still in use in Europe, and was registered in 1987 by UNESCO as a World Heritage Site.

The origins of the palace can be traced back to the time of the first occupations by the Moorish conquest of Seville in 712. The Spanish Reconquista marked the beginning of a new era for the palace, one under which elements of Gothic, Renaissance and Romanesque design were combined to the original Islamic structure leading to the unique blend of styles known as Mudéjar. The Alcazar of Seville was used as a location for scenes in Season Five, and Six of the HBO TV series, Game of Thrones, standing in for the Water Gardens of Dorne.

My daughter and I spent several hours there on a gorgeous December day. I was armed with the new Fujifilm X-T3 and a few good lenses that I had rented for this particular trip. It’s a fantastic camera for travel (and just about everything else) but I’ll shut up now and let the images speak for themselves. Enjoy… 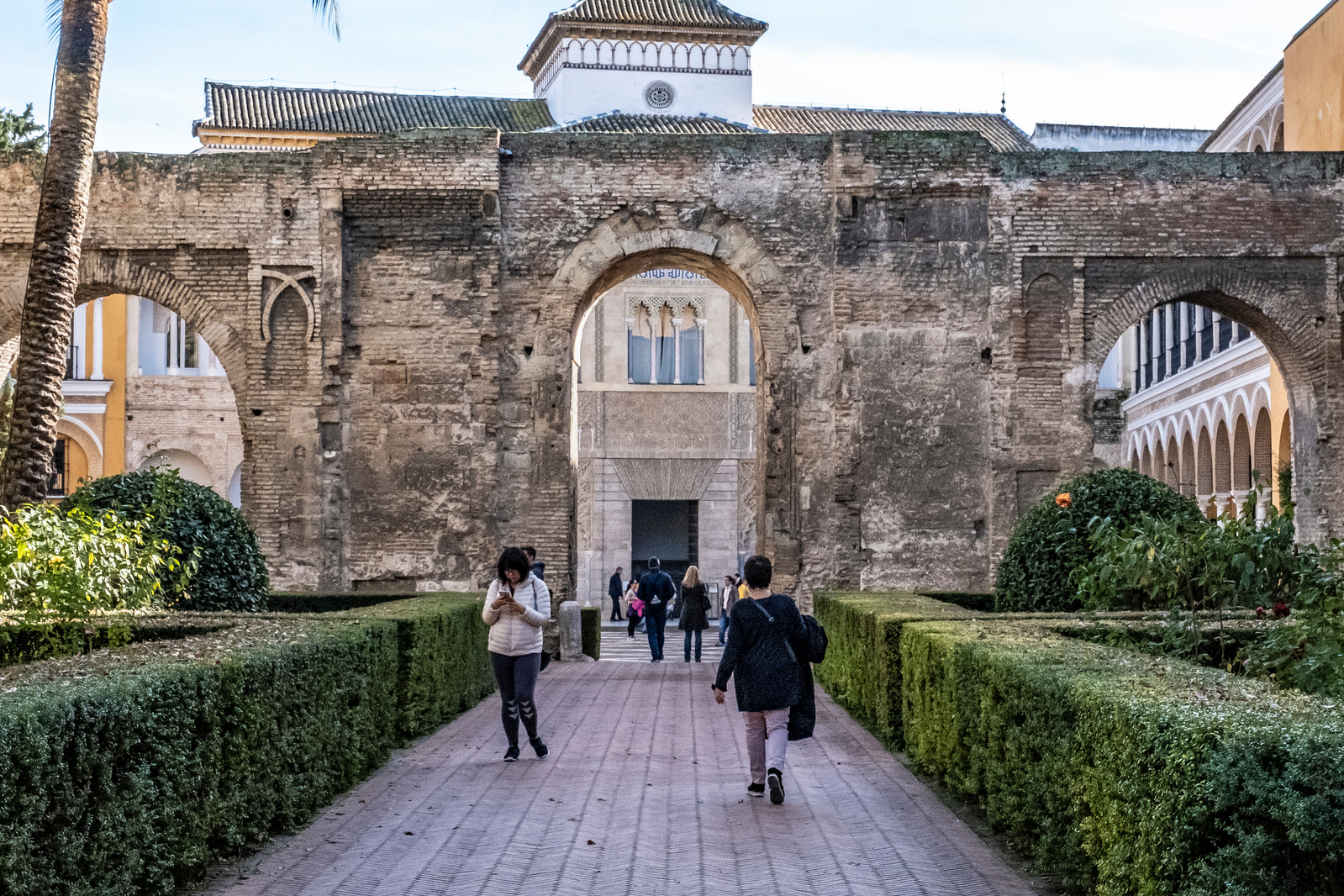 The Puerta del León is the main entrance to the Alcázar and takes its name from the 19th century tile-work inlaid above it, a crowned lion holding a cross in its claws and bearing a Gothic script…

The Patio de las Doncellas, one of the access-gates, meaning “The Courtyard of the Maidens”. It refers to the legend that the Moors demanded 100 virgins every year(!) as tribute from Christian kingdoms in Iberia. In the center is a large, rectangular reflecting pool with sunken gardens on either side. 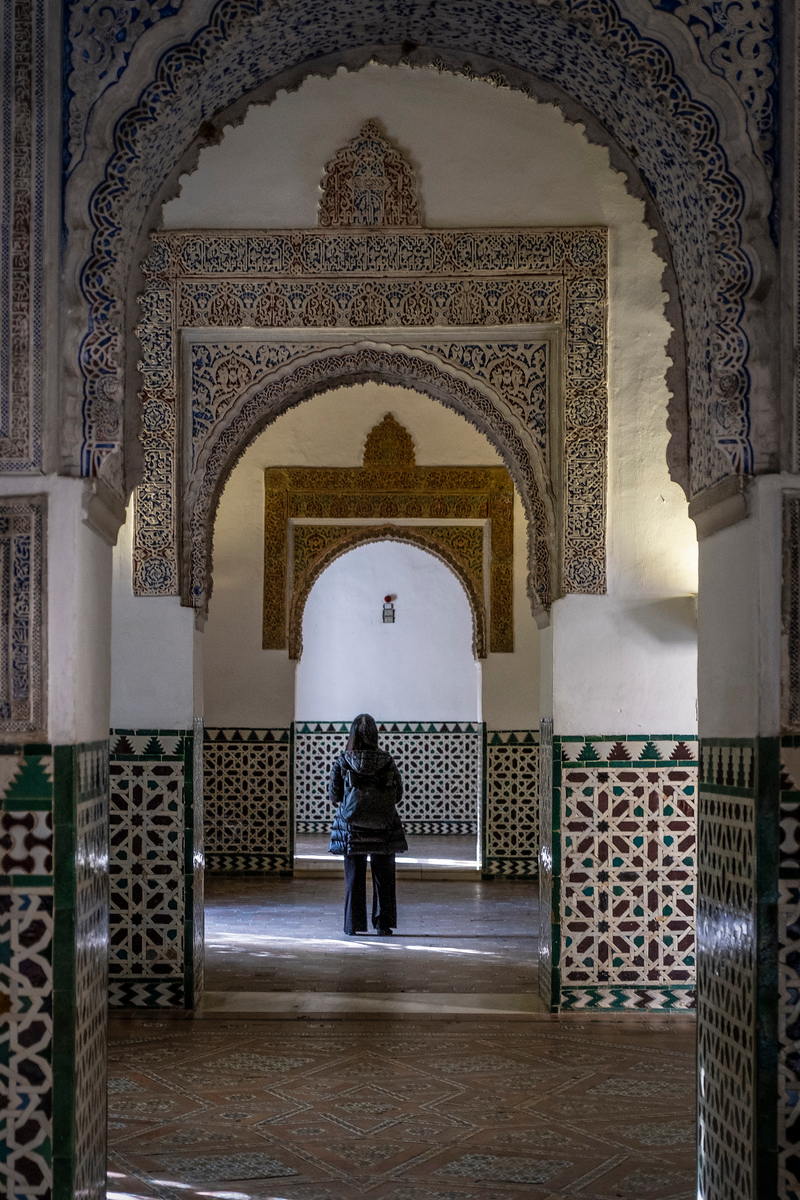 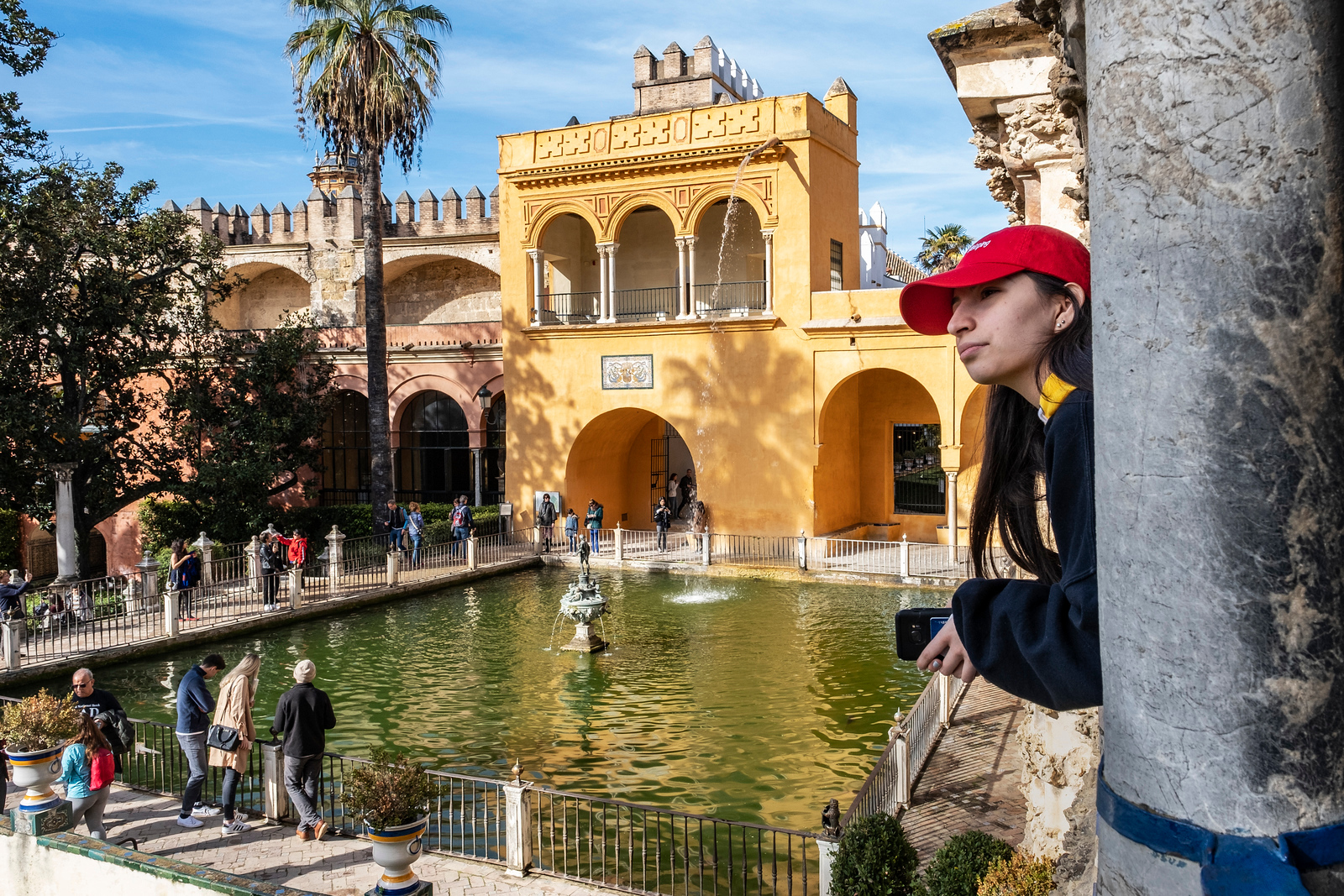 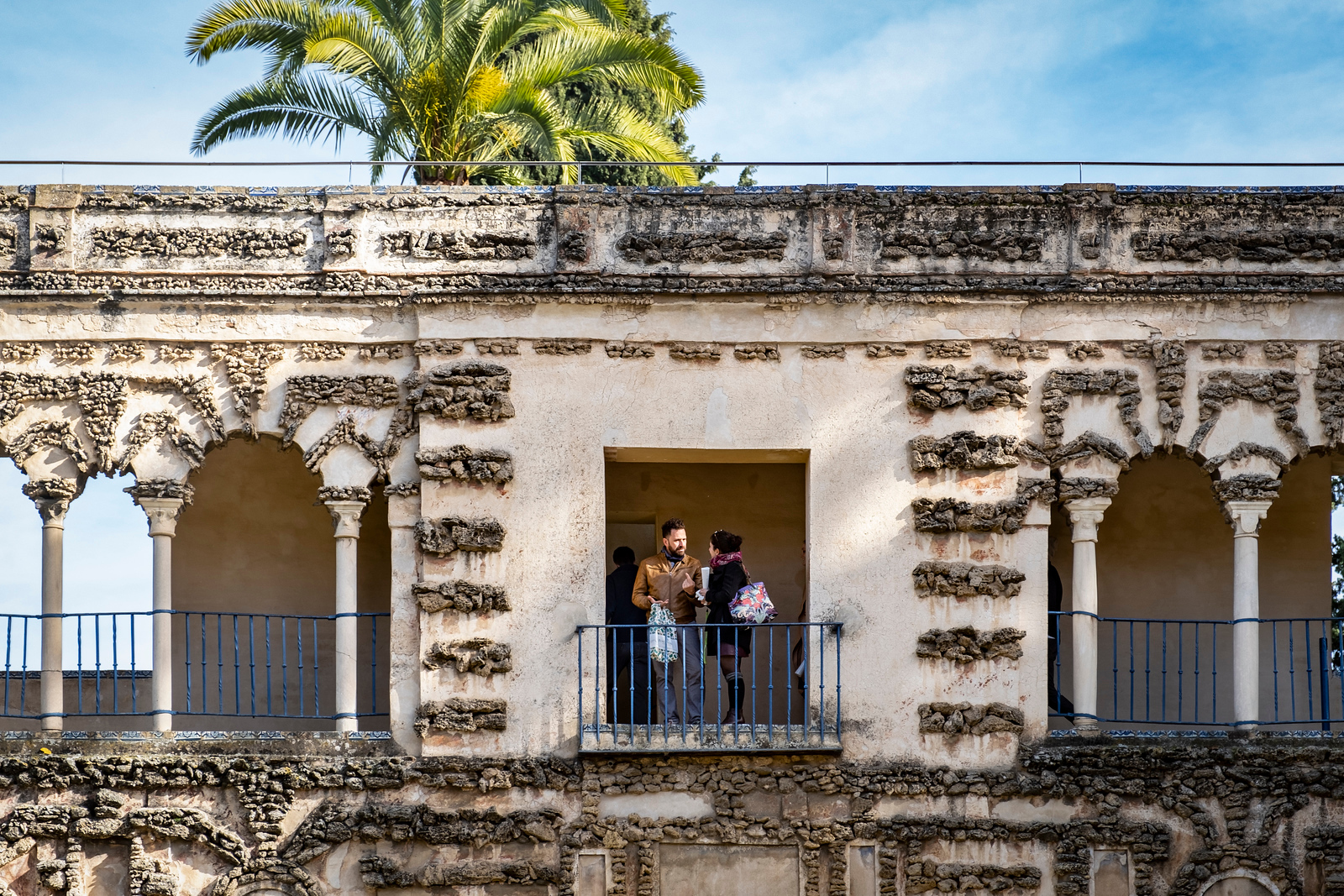 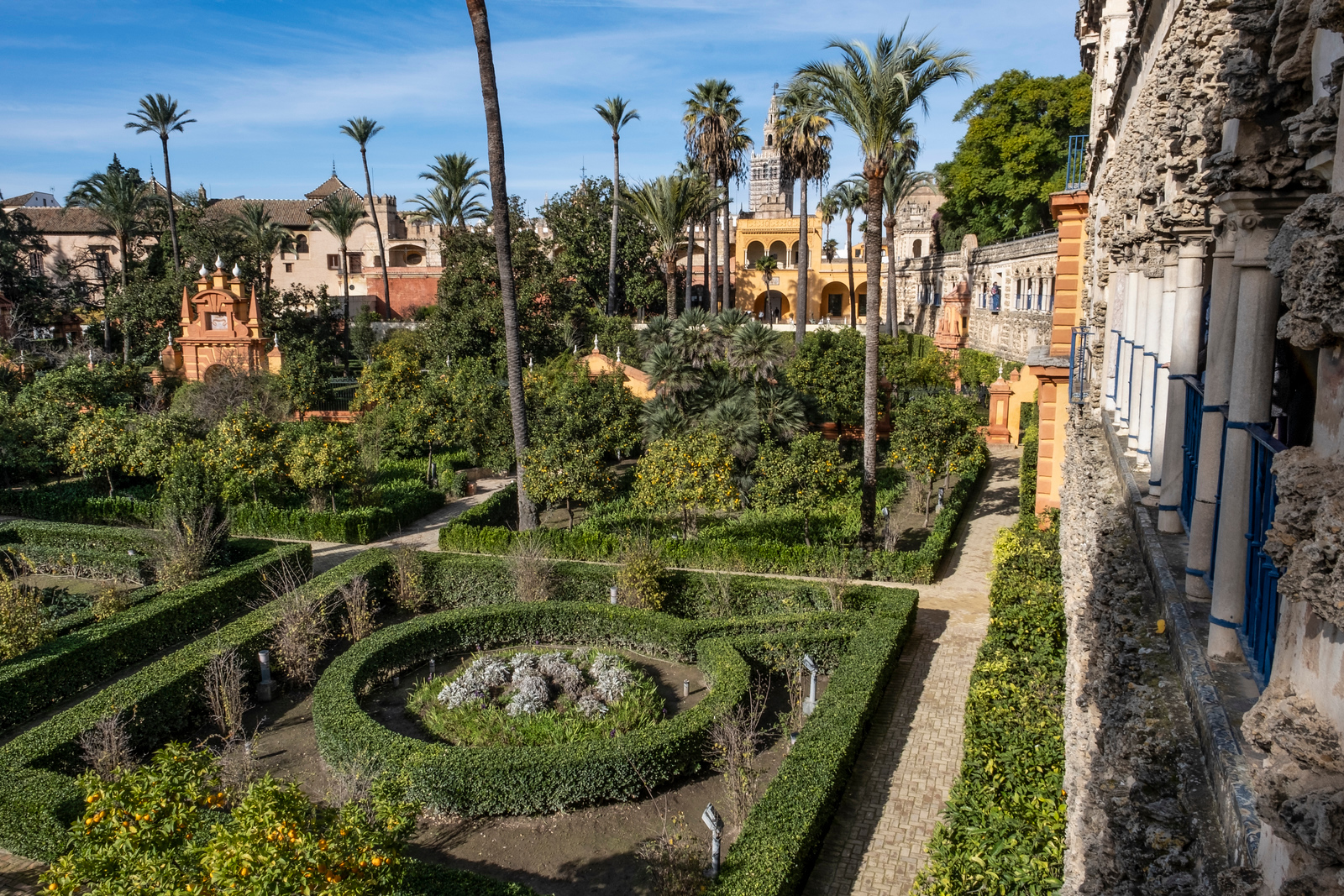 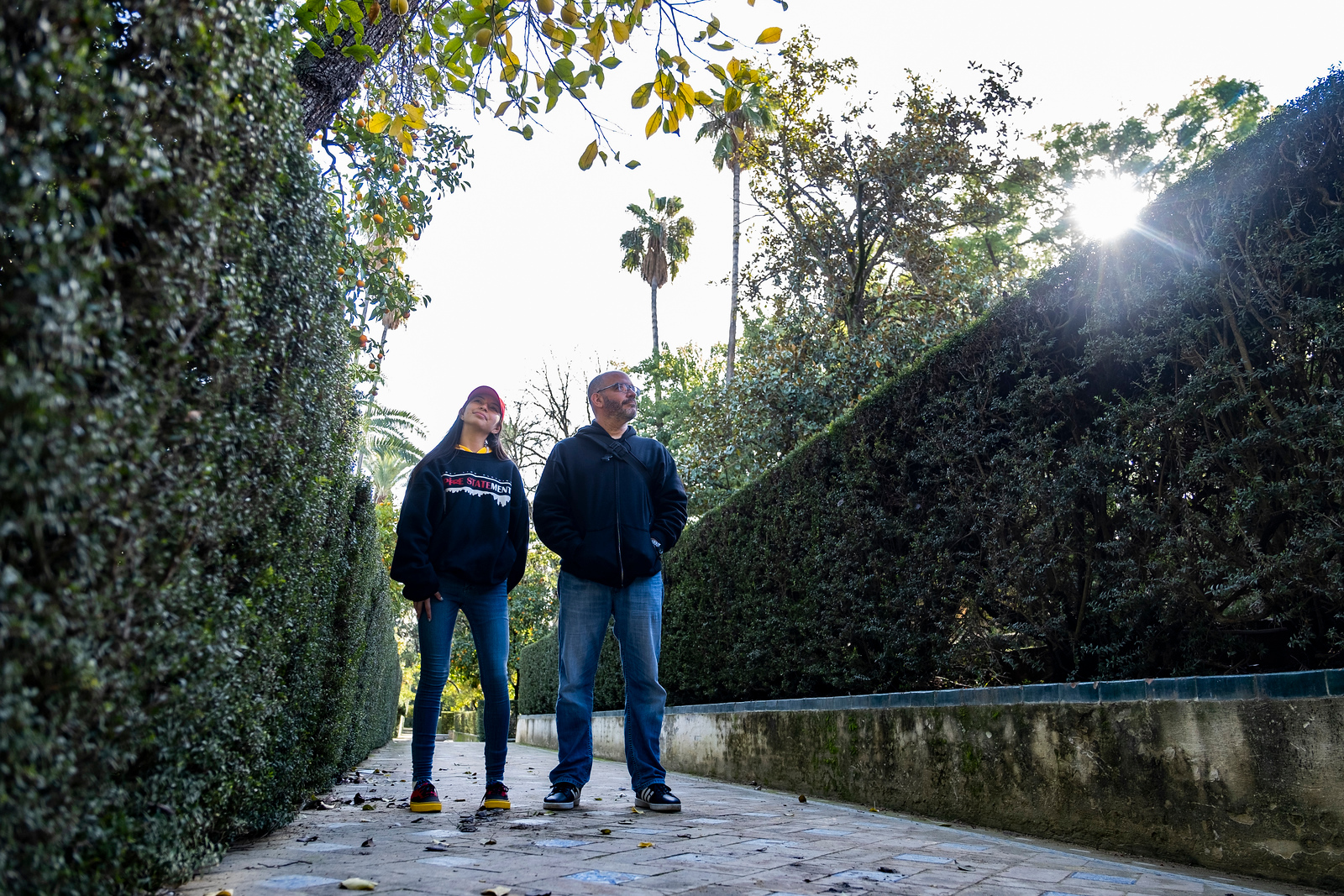 Walking the gardens of the Alcázar… 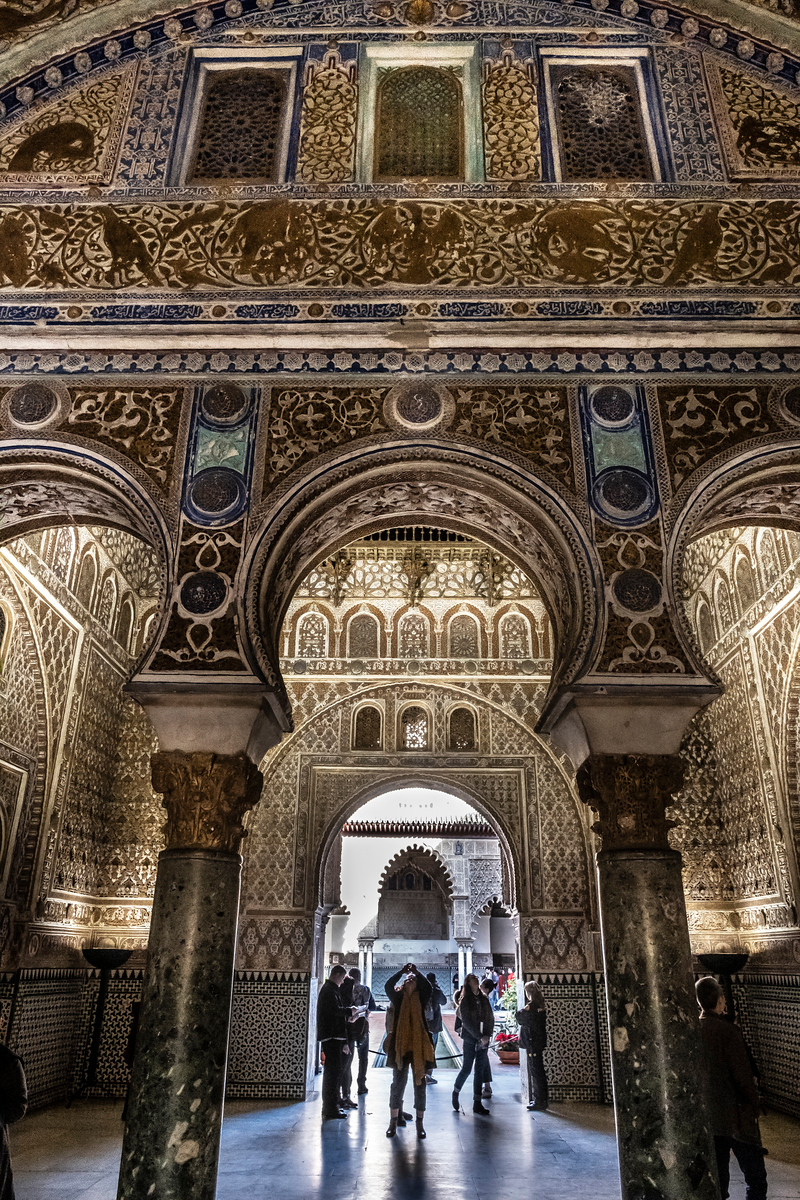 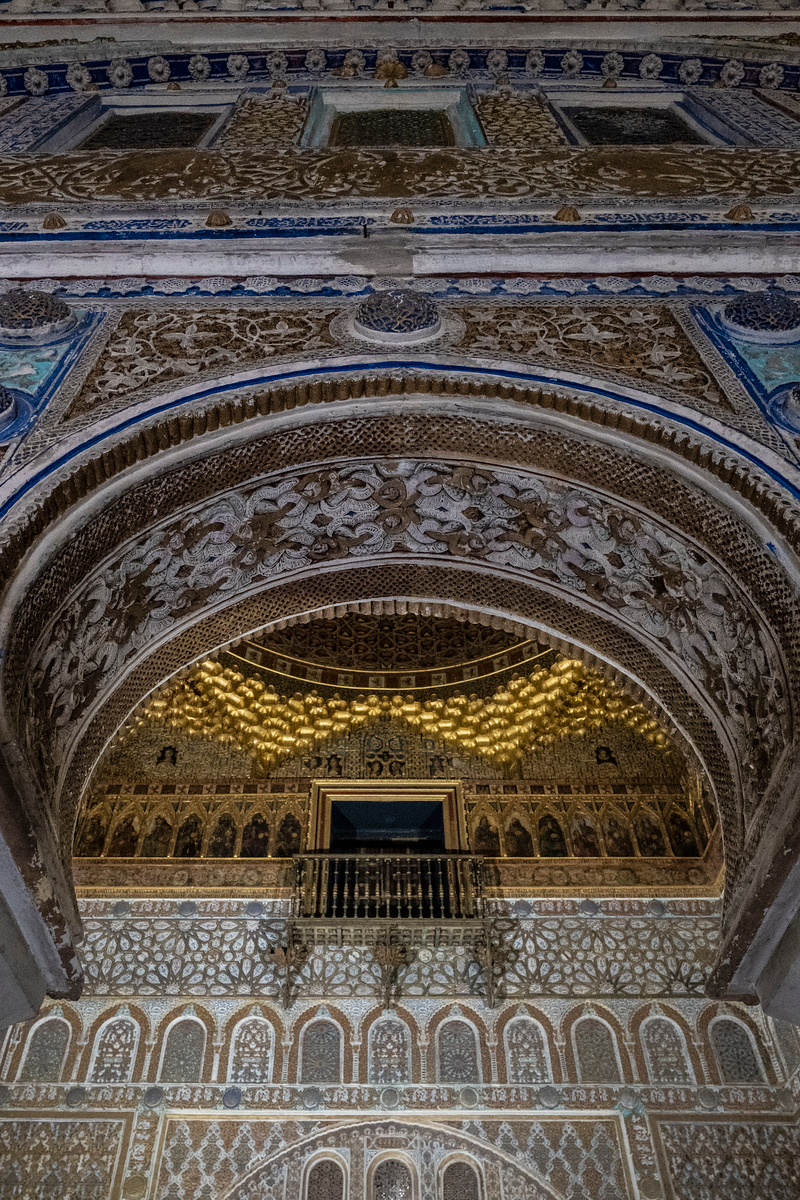 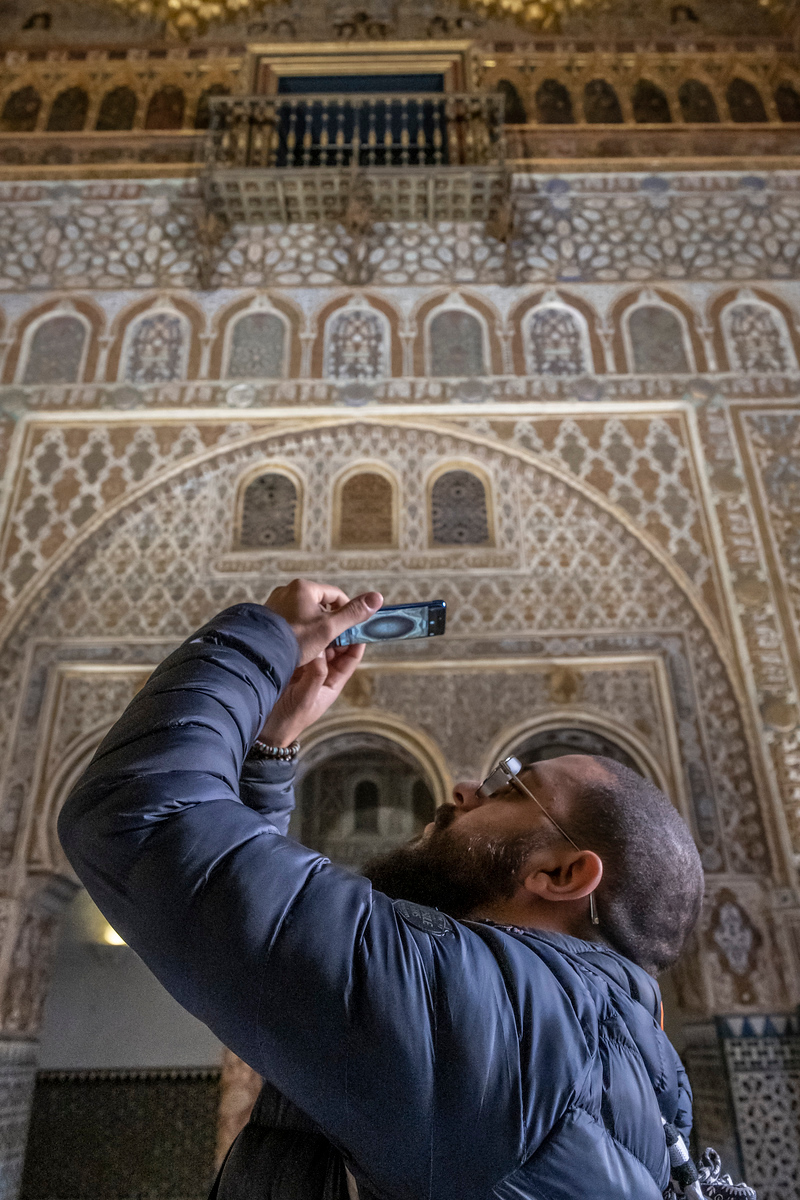 The Salon de Embajadores (Hall of Ambassadors) is the centerpiece of the Royal Palaces. The Hall is covered by a majestic dome of gilded wood which had many of the visitors to the Alcázar (including yours truly) pointing their cameras upwards…

Outside the Salon de Embajadores, a model poses for photographers…

And a rather diverse assemblage of tourists attempt to make some sense of it all. 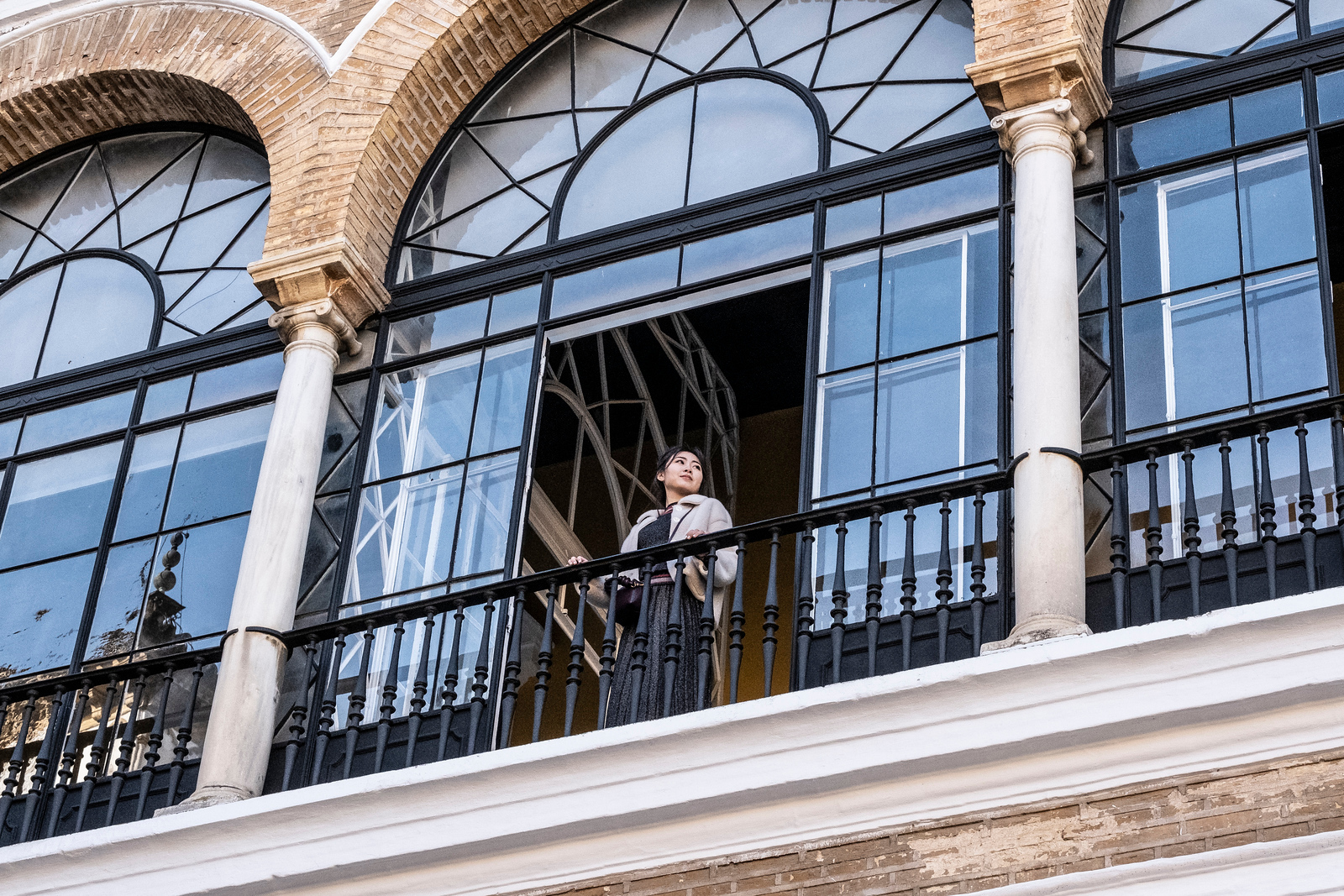 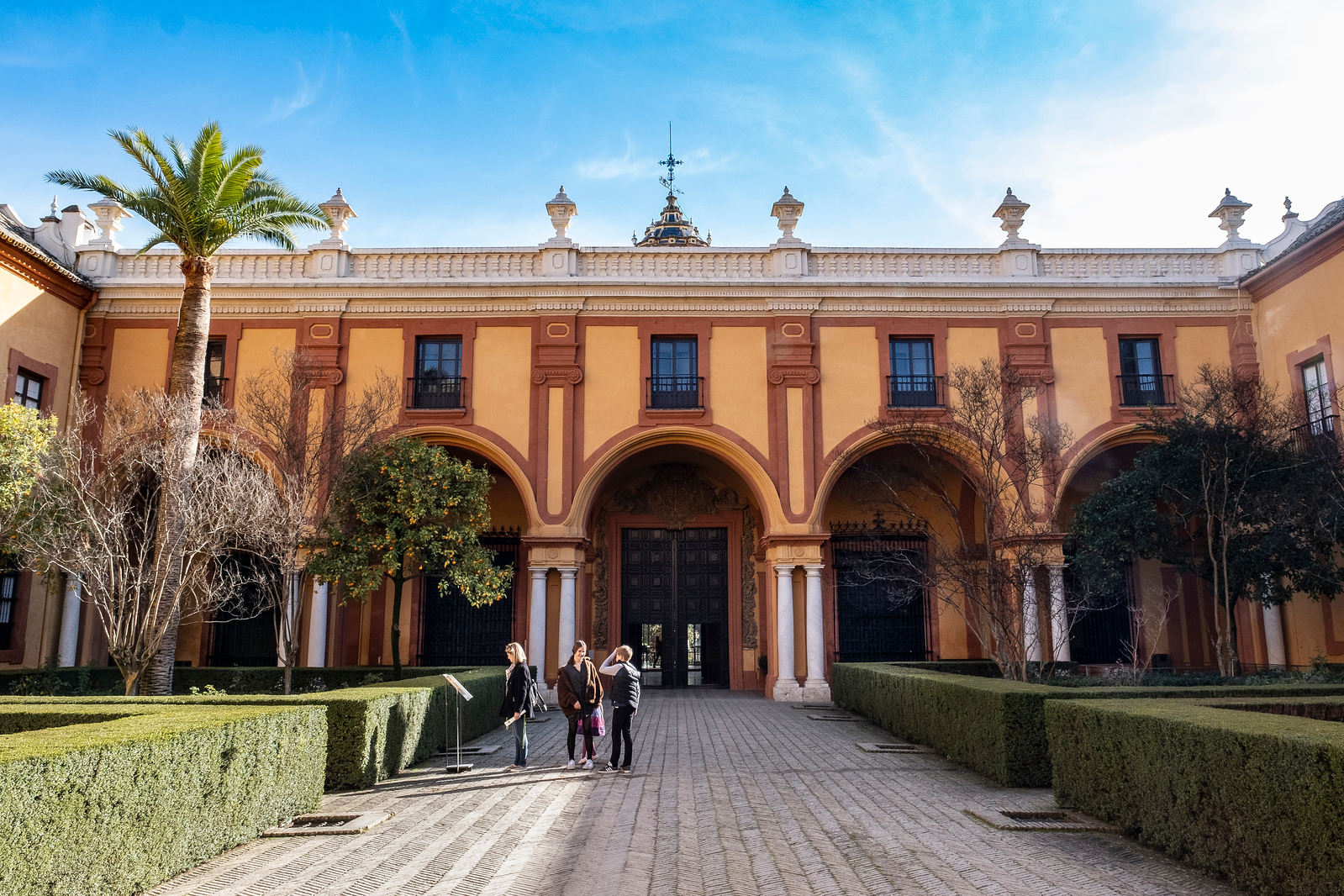 More images from the Alcázar (and yes, there’s that model again) on what was an absolutely glorious day.

So this wraps up our time in Seville, one of the most beautiful cities I’ve ever visited. And like I said in my previous posts, December is a lovely time to visit Seville and southern Spain. Weather was low-to-mid 70s during the day, jacket weather at night; and the swarm of tourists you’ll find in the summer months? Not in December. Visit the city of Seville’s official tourism website to learn more www.visitasevilla.es/en

And if you just joined us, my daughter and I decided to embark on an eight-city driving tour of Spain this past December that started in Madrid and commenced south to the charming city of Córdoba (check out the photographs HERE and images from the stunning Mosque-Cathedral HERE), then continued further south to Gibraltar, back northwest a bit to the coastal city of Cádiz and Jerez de la Frontera (check out the photographs HERE) and then back up north to the beautiful city of Seville (check out the first series of photographs HERE). In Seville, we visited the charming Plaza de España and the magnificent Seville Cathedral. So consider yourself caught up.

Out next stop will be a four and a half hour drive north of Seville to the UNESCO World Heritage City of Salamanca, home to the world-famous Salamanca University, founded in 1218 as the first university in Spain. Join the other cool kids and SUBSCRIBE HERE so you won’t have to live with regret. You won’t be sorry. Promise.

Written By DanPerezPhotography On March 8, 2019