Oh, Salamanca – how I misjudged you. This ancient university town was only supposed to be a layover city on our drive from Seville to Santiago de Compostela in Galicia. I was not expecting it to be as lovely and dynamic a city as I (we) found it to be. Alas.

Well, if you’ve been following this blog, you’d know that my daughter and I embarked on an eight-city tour of Spain back in December (you can catch up on the cities and photographs at the end of this post). In my last post, I presented a series of images from our time spent in the beautiful city of Seville. Our next stop was a 4+ hour drive north to Salamanca where we would lay our heads for the night before proceeding on to Santiago de Compostela in Galicia – another 4+ hour drive. 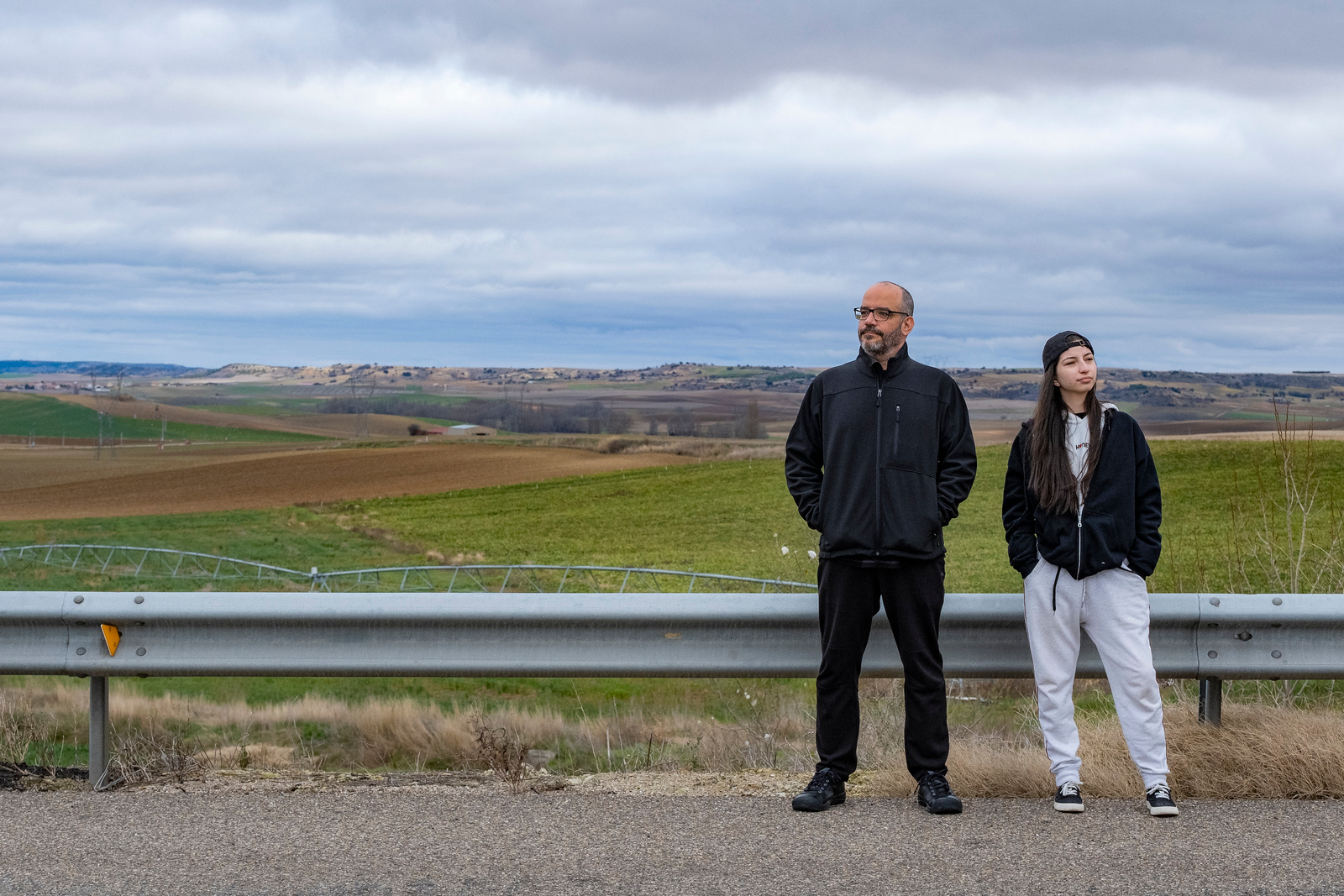 Now I knew Salamanca was no slouch city. I mean, its historic center had been designated a World Heritage Site by the UNESCO. What I wasn’t expecting was how dynamic and charming this city turned out to be. And by the time we were back in our rental car heading up to Galicia, I was kicking myself hard for not allowing another day in this lovely city.

Salamanca is situated in the west of Spain in the Autonomous Community of Castilla and León. It was first conquered by the Carthaginians in the 3rd century B.C. and then became a Roman settlement before being ruled by the Moors until the 11th century. The Cathedral School of Salamanca existed as far back as the late 12th century and is one of the country’s best examples of Renaissance architecture. In its heyday it was one of the most highly regarded European universities and still attracts thousands of international students.

We arrived in Salamanca late afternoon after heading out of Seville that morning after breakfast. Now, the bad news is that I planned for only a day in Salamanca but the good news is that it was a beautiful day – starting when we arrived. The other good thing was our hotel, the lovely NH Salamanca Puerta de la Catedral which was walking distance to the Cathedral, Plaza Mayor and University. Highly recommended. And finally, I was armed with the new Fujifilm X-T3 and a few good lenses that I had rented for this particular trip. It’s a fantastic camera for travel (and just about everything else) but I’ll shut up now and let the images speak for themselves. Enjoy… 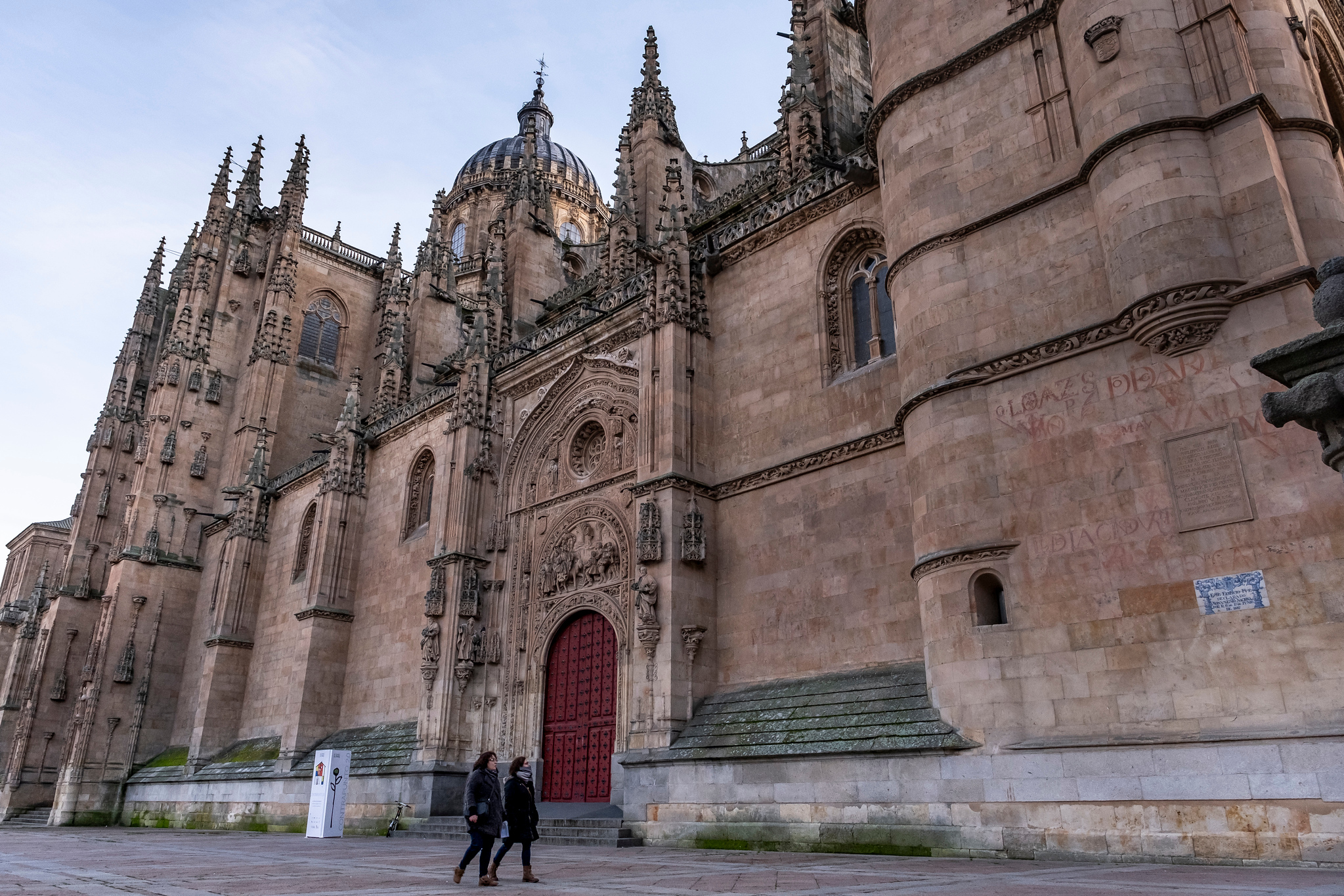 The New Cathedral of Salamanca is, together with the Old Cathedral, one of the two cathedrals of Salamanca. It was constructed between the 16th and 18th centuries in two styles: late Gothic and Baroque. View the complete gallery HERE On our way to dinner at the Plaza Mayor… 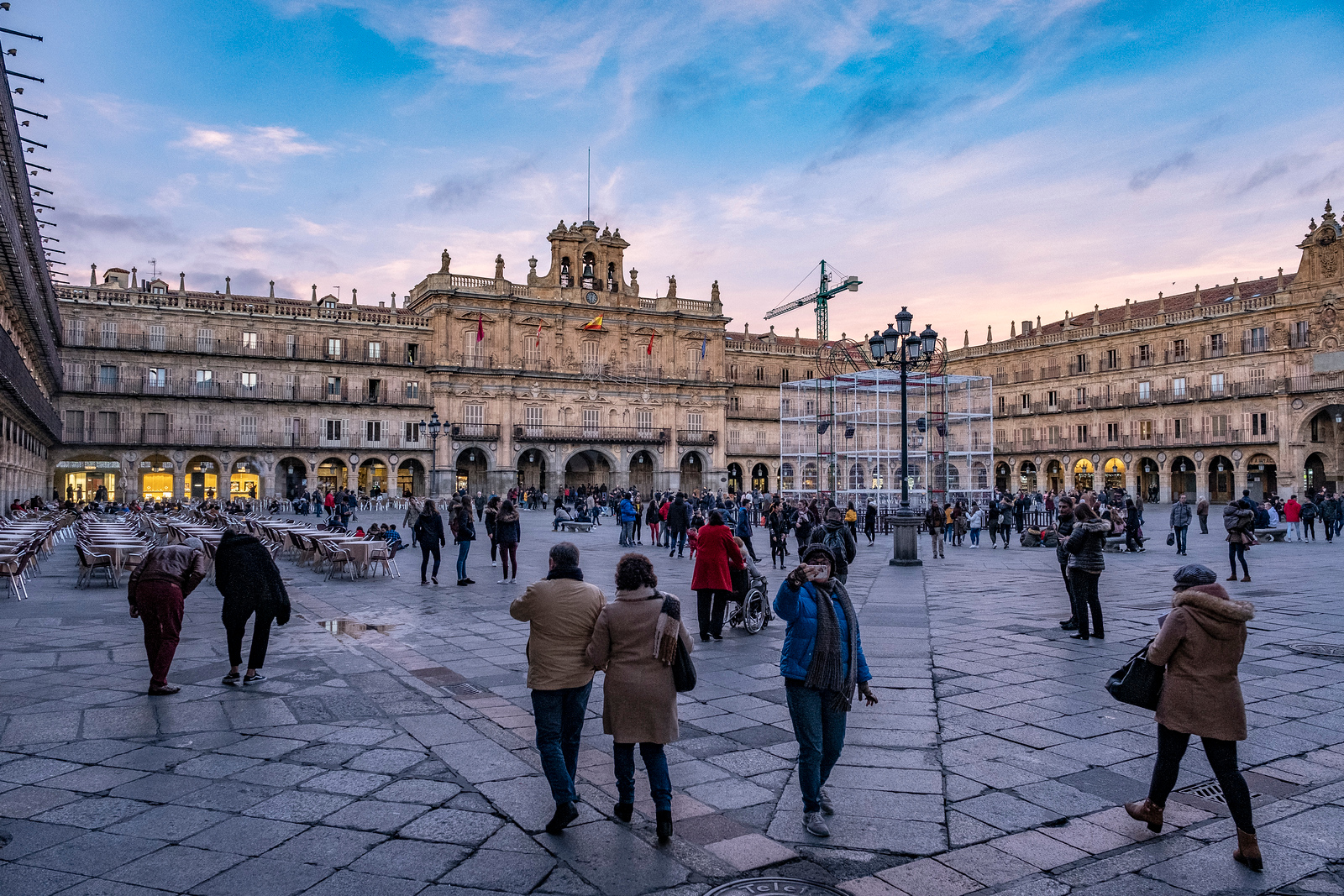 We arrived at the stunning Plaza Mayor of Salamanca right before sunset. King Philip V ordered the construction of the plaza in 1710 to be used for bullfighting and was designed by the famed Churriguera family in sandstone. Because of the glow of its sandstone buildings, which the Plaza Mayor represents at its core, Salamanca is known as La Dorada, “The Golden City”. Adorned with Christmas lights, the Plaza was gorgeous…

Walking back to our hotel, the streets were abuzz with youthful energy… Back at our hotel, the NH Salamanca Puerta de la Catedral, the view from our window…

Now, I’m not one to wake up early – especially when I’m on vacation. But after spending our first (and only) night in Salamanca and with this being our last day here, I was up early (leaving my daughter in bed asleep) and out and about with the Fujifilm X-T3. And boy, was it worth it…

The Clerecía is a large domed church featuring an imposing twin-towered facade by Andrés García de Quiñones (a Spanish architect of the Baroque period). Commissioned by Queen Margarita of Austria, wife of Philip III of Spain, in the seventeenth century, the Clerecía was designed by Spanish architect Juan Gomez de Mora as a church and Jesuit ecclesiastic college. 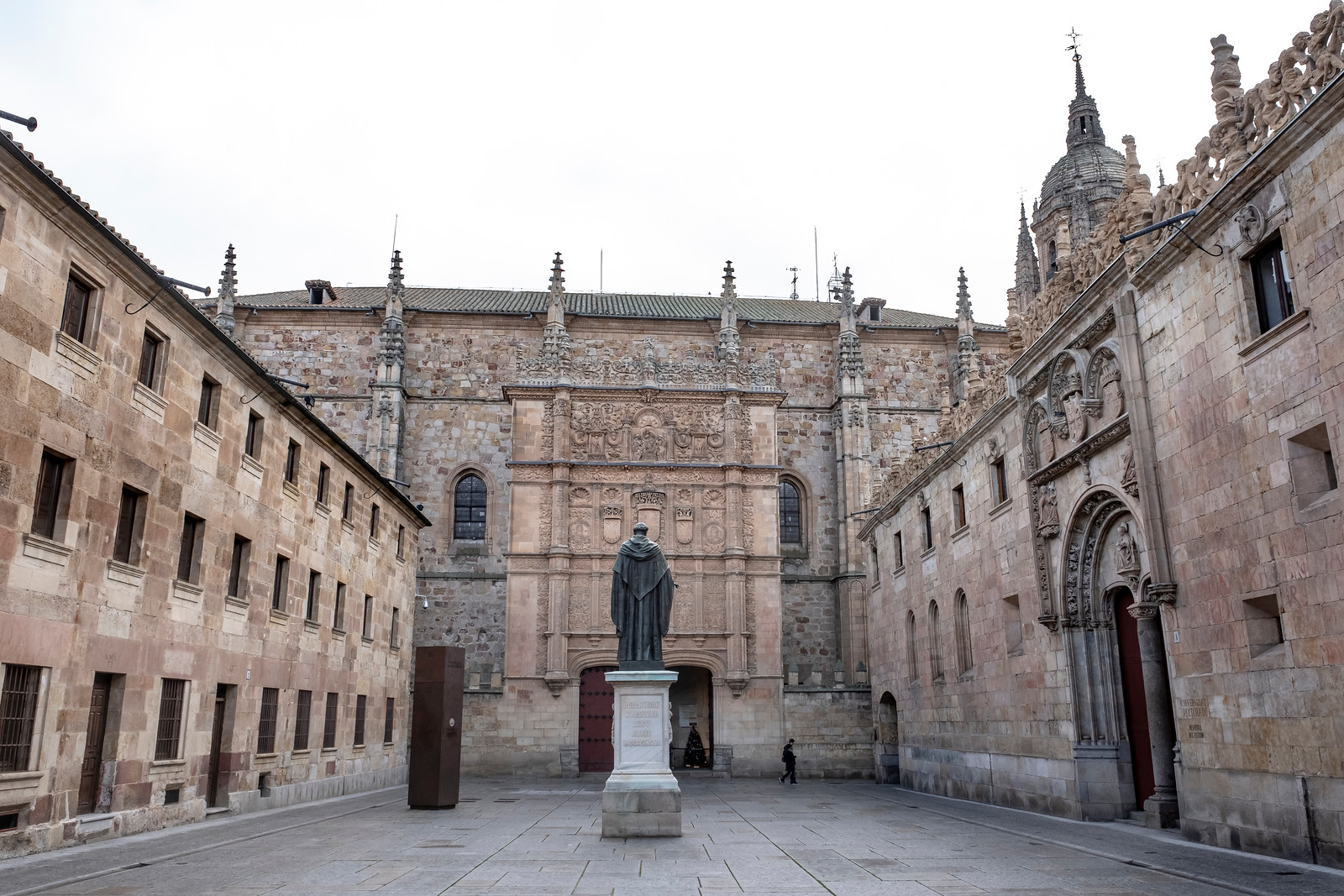 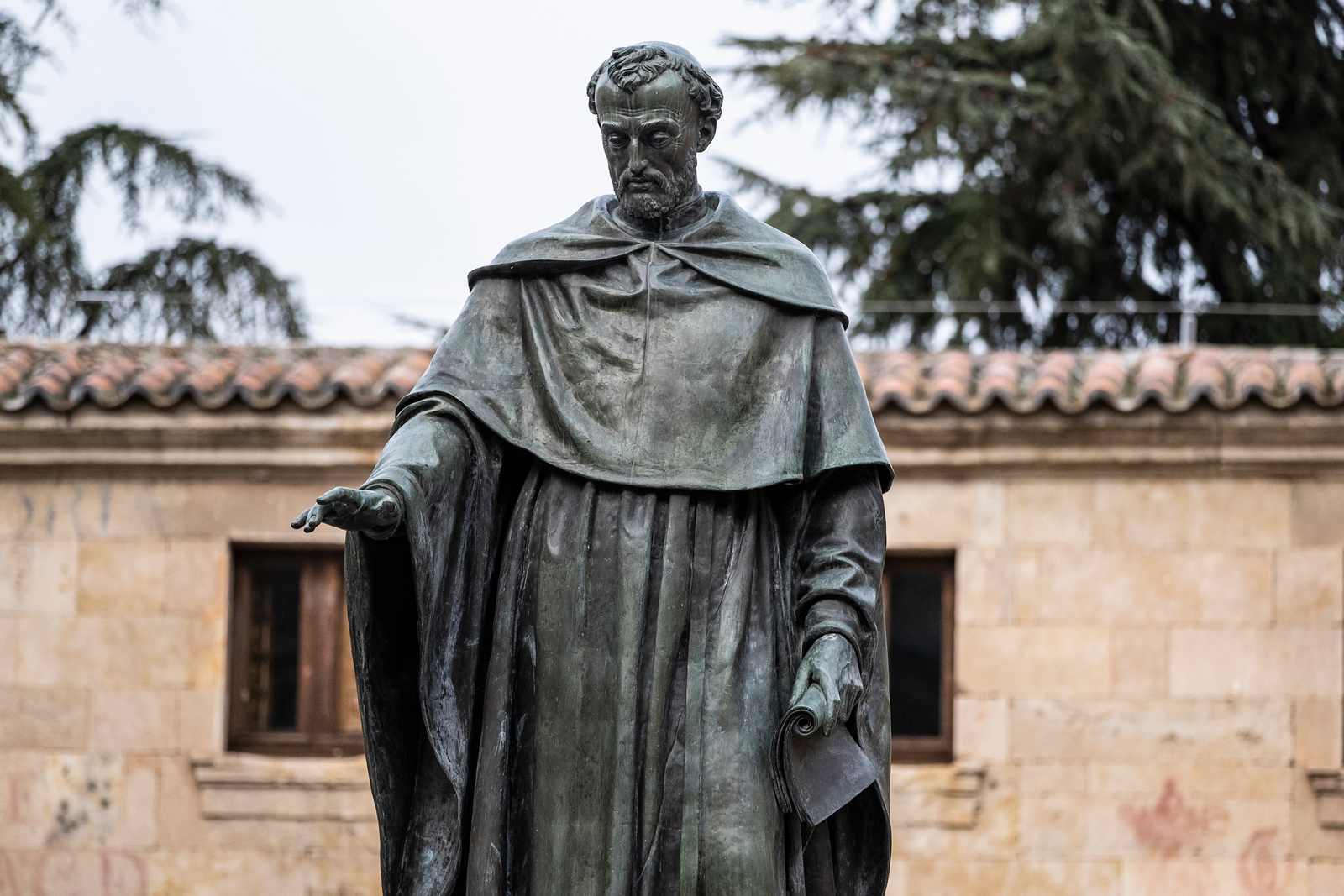 The University of Salamanca, which was founded in 1218, is the oldest university in Spain and the third oldest western university. It is also one of the country’s best examples of Renaissance architecture. It was given the royal charter of foundation (“Estudio General”) by king Alfonso IX of León in 1254. With its 30,000 students, the university is, together with tourism, a primary source of income in Salamanca. In 2018 the University celebrated its 800th anniversary.

The Casa de las Conchas (House of Shells) was built from 1493 to 1517 by Rodrigo Arias de Maldonado, a knight of the Order of Santiago de Compostela and a professor in the University of Salamanca. Its most peculiar feature is the façade, mixing late Gothic and Plateresque style, decorated with more than 300 shells (sculpted from sandstone), a symbol of the order of Santiago, as well as of the pilgrims performing the Way of St. James. It currently houses a public library.

The entrance of the Casa de las Conchas has the coat of arms of the Maldonado family. 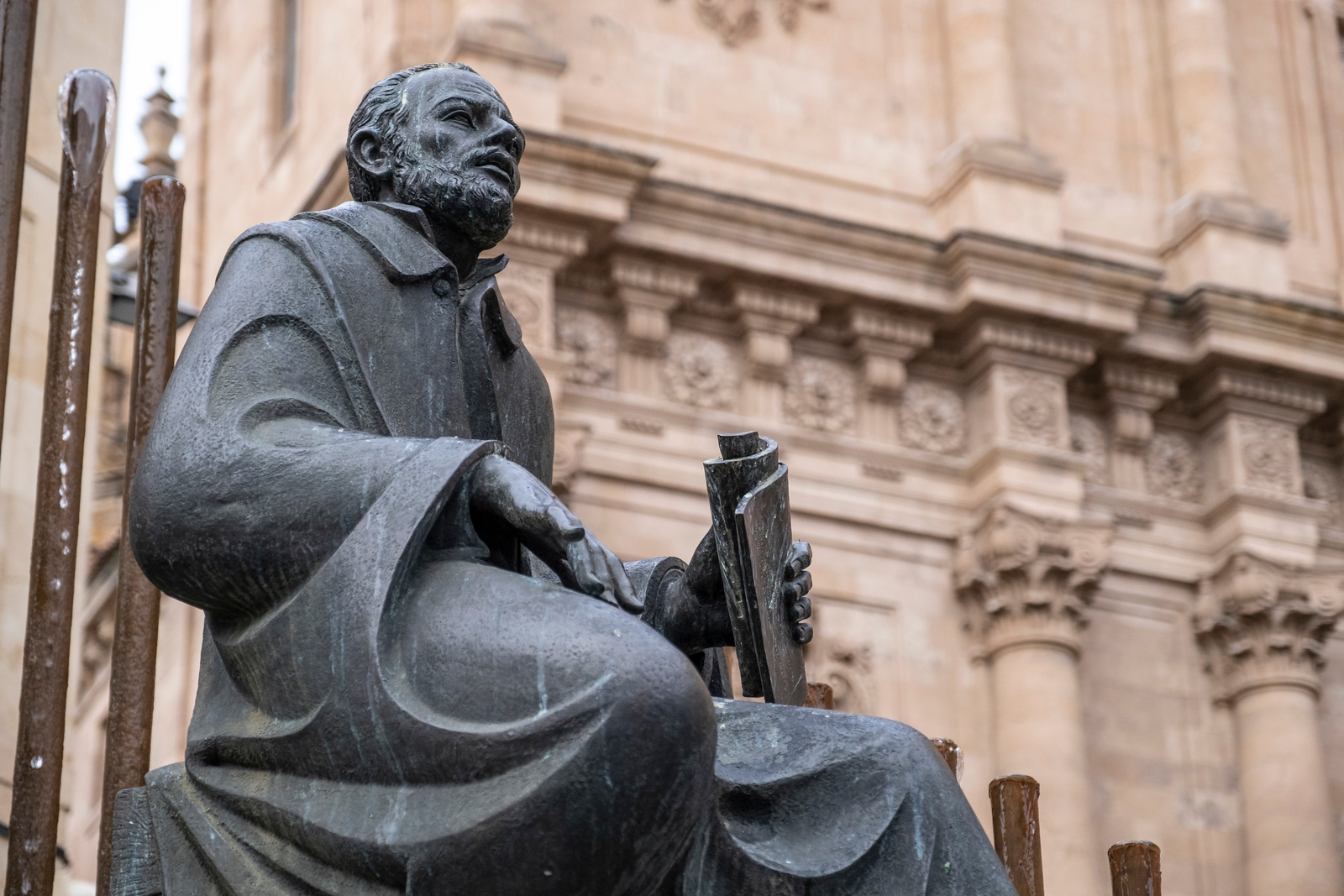 Monument to Spanish music theorist and organist Francisco de Salinas (1513-1590). Blind from the age of eleven, Salinas served as organist to the celebrated Duke of Alba, and afterwards (starting in 1567) as professor of music at the University of Salamanca. 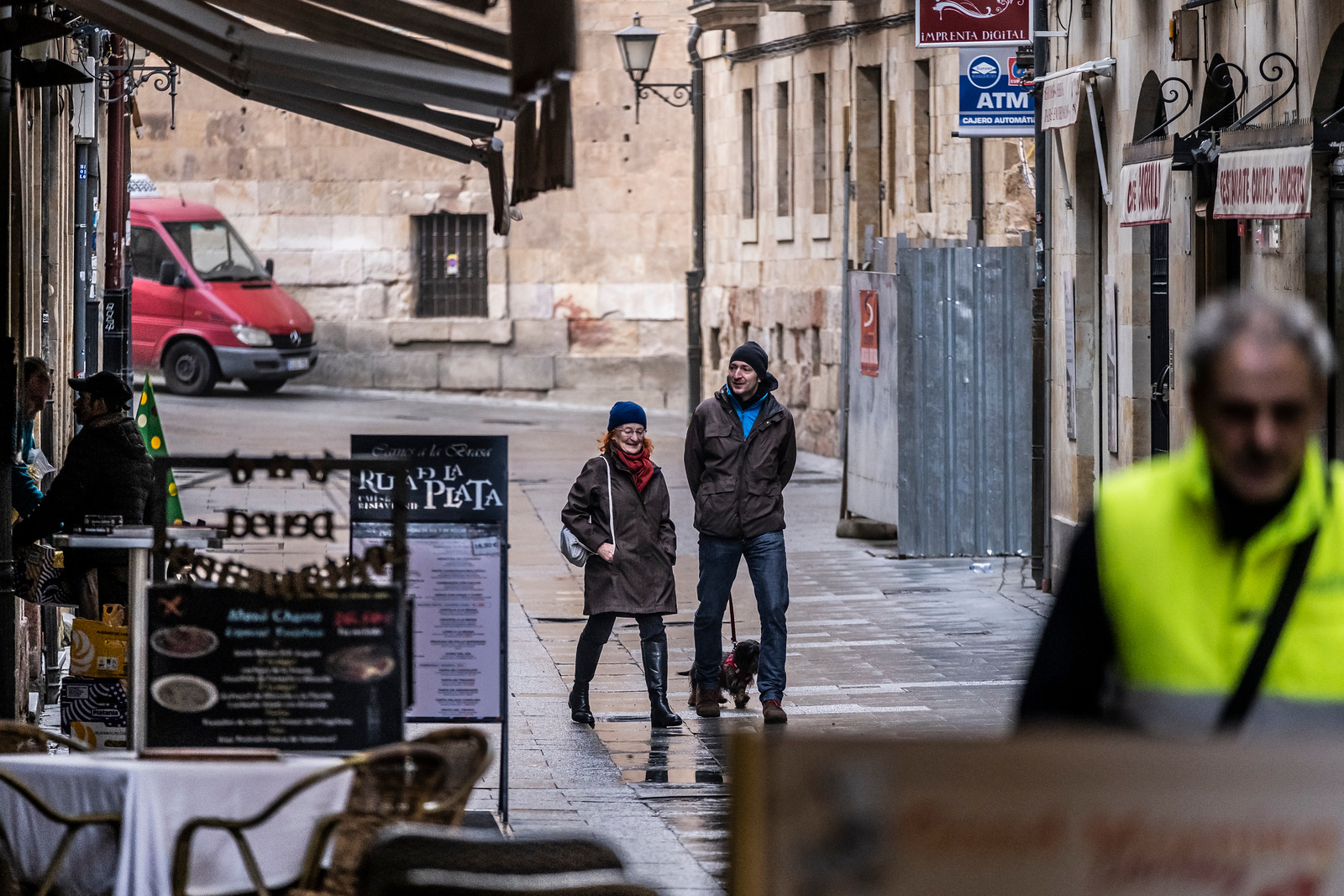 Street scenes from a magical morning walking the streets of Salamanca with the Fujifilm X-T3.

Hope you enjoyed the photographs. December is such a lovely time to visit Spain. It was a bit cooler north of Madrid compared to the cities we visited in the south but not by much. Streets adorned with Christmas lights and far fewer tourists than you’ll find in the summer months. As for Salamanca, it was a truly wonderful city. Bummed I didn’t allow for an extra day (or two) but I will be back for sure. Stay tuned for my next post which will feature the stunning Cathedral of Salamanca. Join the other cool kids and SUBSCRIBE HERE so you won’t have to live with regret. You won’t be sorry. Promise.

And if you’re just joining us, my daughter and I decided to embark on an eight-city driving tour of Spain this past December that started in Madrid and commenced south to the charming city of Córdoba (check out the photographs HERE and images from the stunning Mosque-Cathedral HERE), then continued further south to Gibraltar, back northwest a bit to the coastal city of Cádiz and Jerez de la Frontera (check out the photographs HERE) and then back up north to the beautiful city of Seville (check out the first series of photographs HERE). In Seville, we visited the charming Plaza de España as well as the magnificent Seville Cathedral and the Royal Alcázar, both UNESO World Heritage Sites. So consider yourself caught up, yes?

Written By DanPerezPhotography On March 12, 2019

The New (and Old) Cathedral of Salamanca (In Pictures)