The New (and Old) Cathedral of Salamanca (In Pictures)

In my last post, I introduced you to the ancient Spanish city of Salamanca (check it out HERE), one of the oldest university towns in Europe featuring a rich collection of Renaissance, Roman, Gothic, and Baroque monuments. Among them are two impressive cathedrals, the Old Cathedral and the New Cathedral. The Old Cathedral (Catedral Vieja de Santa María) was founded by Bishop Jerome of Périgord, in the 12th century and completed in Romanesque/Gothic style in the 14th century.

By the late 15th century, however, the Romanesque cathedral no longer reflected Salamanca’s status as seat of Castile’s premier university, and in 1491 the chapter resolved to build a new church. The New Cathedral (Catedral Nueva) was constructed between the 16th and 18th centuries in two styles: late Gothic and Baroque. Building began in 1513 and the cathedral was consecrated in 1733.

Our stop in Salamanca was just supposed to be a place to lay our head for a night on our eight hour drive from Seville to Santiago de Compostela (the final city in our eight city, nineteen day tour of Spain this past December) but what a truly beautiful city Salamanca was. Wish I had stayed an extra day (or two!) to explore this city further. In the day and a half we had, we did manage to pay a visit to the old and new cathedral, both of which were stunning. Enjoy the photographs!

Exterior of the cathedral was impressive… 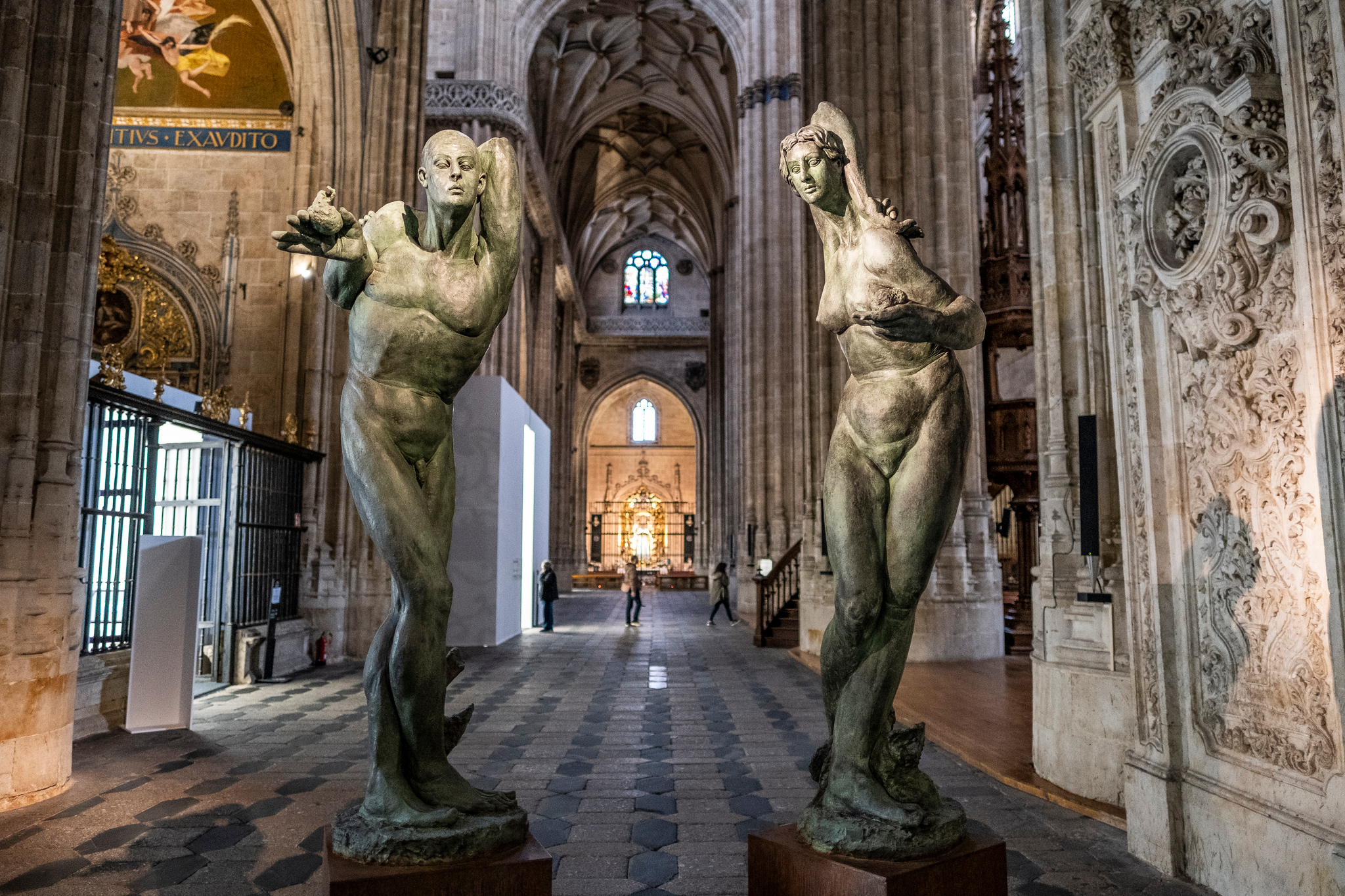 The majestic interior dome of the cathedral… 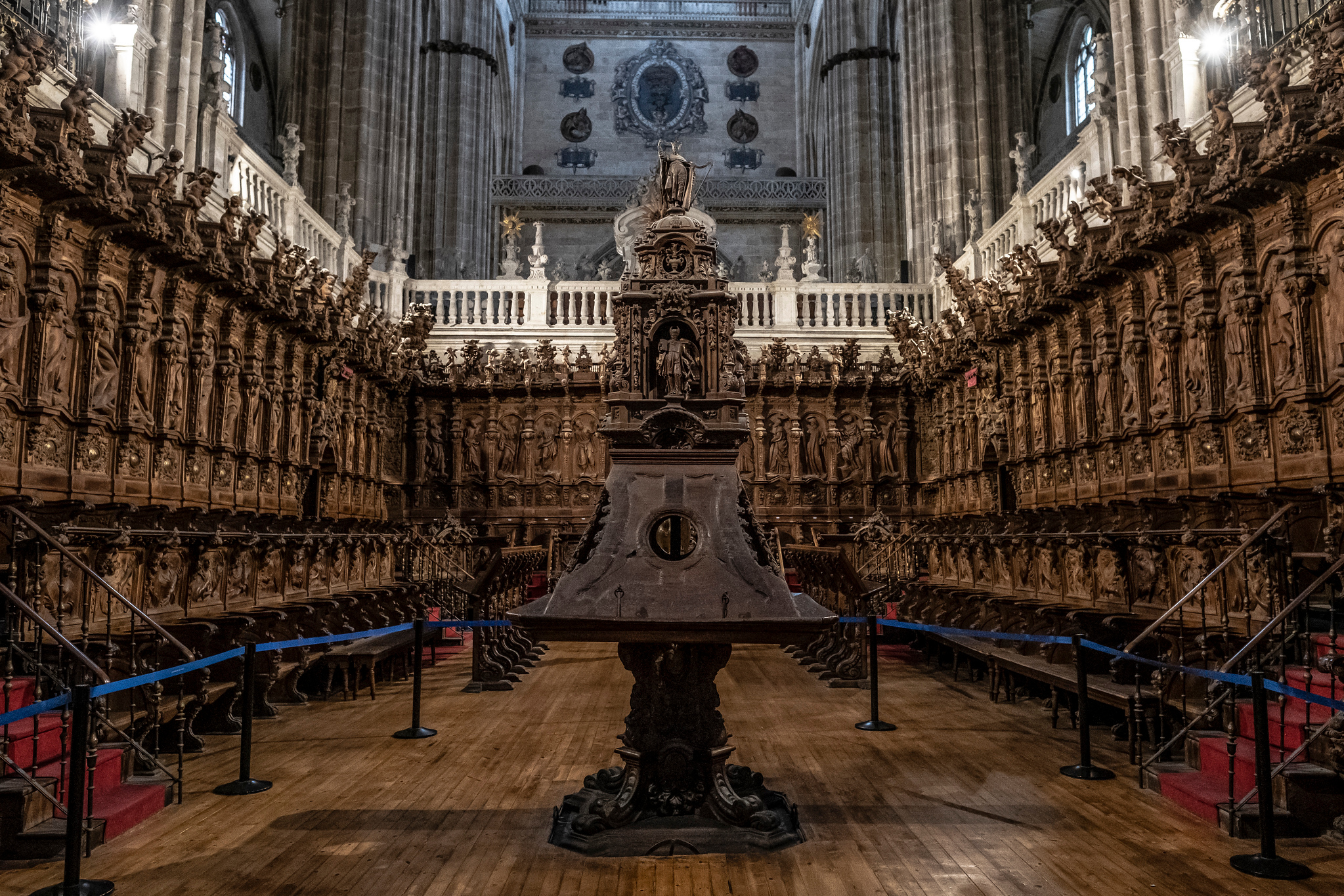 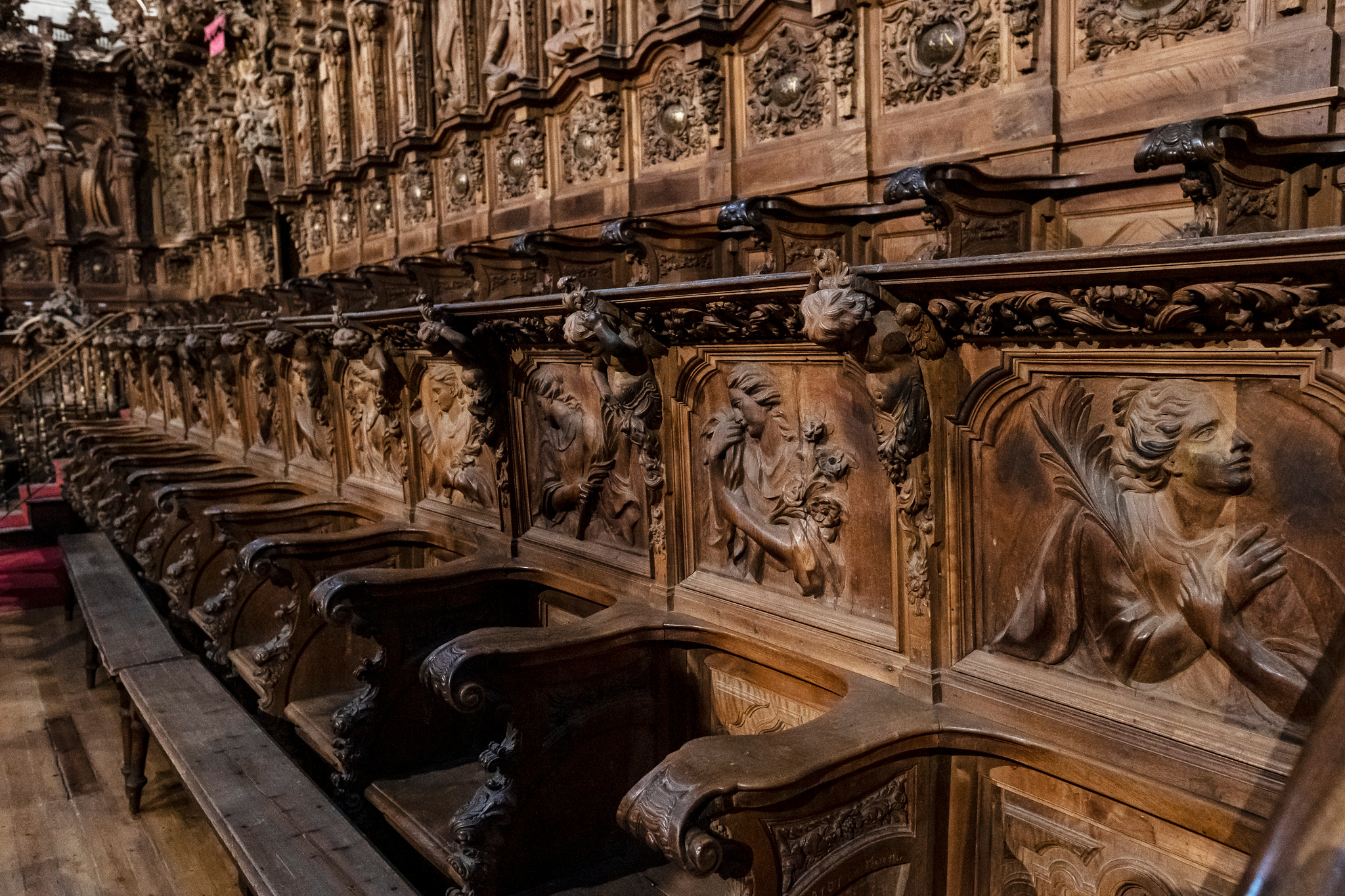 The temple’s lavish Baroque retrochoir was built from 1710 to 1733 by brothers Joaquín and Alberto of the prominent Churriguera family. The term “Churrigueresque” denotes a style that is visually frenetic and exuberantly detailed.

The apse inside the Old Cathedral houses a large cycle of 53 tableaux, 12 of which by the 15th-century Italian artist Dello Delli, depicting the life of Jesus and the Virgin Mary. A fresco of the Final Judgement is over them.

Me and my grrrl taking five inside the Old Cathedral. 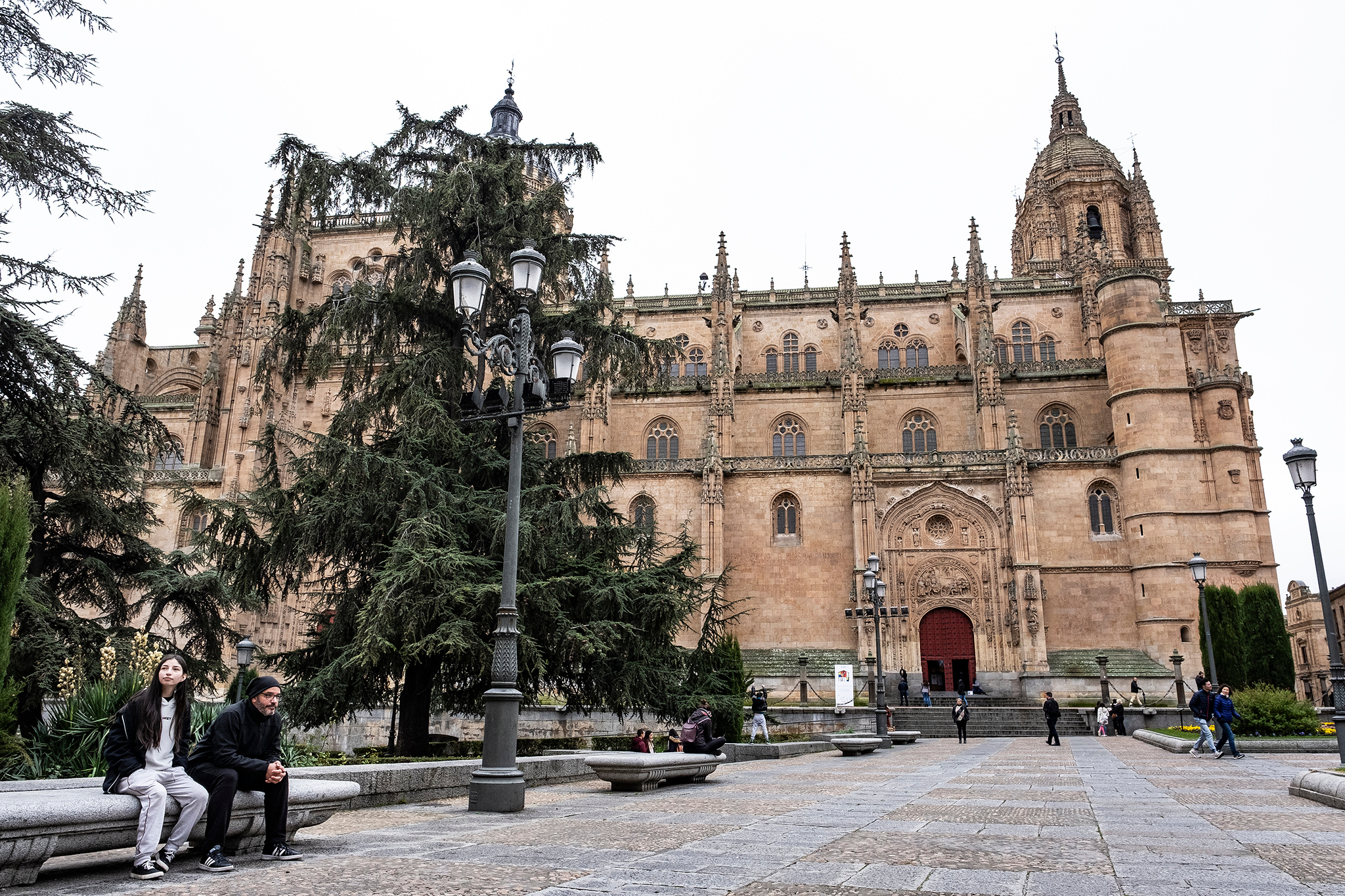 As I hope these photographs clearly illustrated, the Salamanca Cathedral(s) is one of the most beautiful cathedrals I’ve ever visited and a must-see attraction in this dynamic city. Nuff said. Learn more by visiting catedralsalamanca.org

Want to see more of Salamanca? Click the image below: 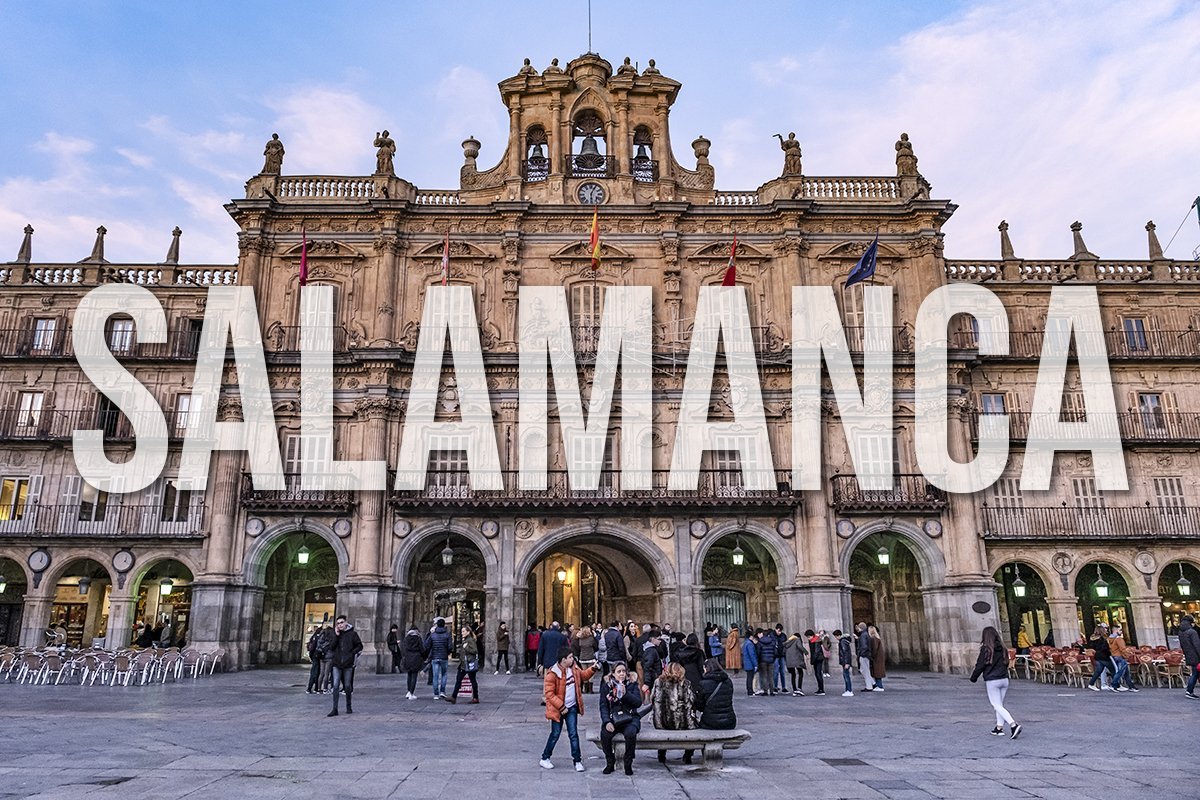 In Salamanca, we stayed in the lovely NH Salamanca Puerta de la Catedral which was walking distance to the Cathedral, Plaza Mayor and University. Highly recommended. All photographs taken with the Fujifilm X-T3 and a few good lenses that I had rented for this particular trip. And if you’re just joining us, my daughter and I decided to embark on an eight-city driving tour of Spain this past December that started in Madrid and commenced south to the charming city of Córdoba (check out the photographs HERE and images from the stunning Mosque-Cathedral HERE), then continued further south to Gibraltar, back northwest a bit to the coastal city of Cádiz and Jerez de la Frontera (check out the photographs HERE) and then back up north to the beautiful city of Seville (check out the first series of photographs HERE). In Seville, we visited the charming Plaza de España as well as the magnificent Seville Cathedral and the Royal Alcázar, both UNESO World Heritage Sites. So consider yourself caught up, yes?

Written By DanPerezPhotography On March 15, 2019

The New Cathedral of Salamanca (Revisited)