The Hallowed Cathedral of Santiago de Compostela, Spain (In Pictures)

The last stop in our eight-city tour of Spain back in December was the historic city of Santiago de Compostela in Galicia, Spain – the land where my mother was born. It is there that my daughter and I decided to spend our first Christmas after my wife passed away back in September. Looking back, it was a wise decision. We surprised our family there on Christmas Eve and it capped off a trip that was far more memorable than I could have ever imagined. A father and daughter trip for the ages. Now, let’s get to the cathedral, shall we?

In 997, the early church was destroyed by Muslim ruler Al-Mansur Ibn Abi Aamir (938–1002) and construction of the present cathedral began in 1075 under the reign of Alfonso VI of Castile (1040–1109). The last stone was laid in 1122 and the cathedral was consecrated in 1211 in the presence of king Alfonso IX of Leon and has since been expanded and embellished with additions in the 16th, 17th and 18th centuries.

It is also one of the only three known churches in the world built over the tomb of an apostle of Jesus, the other two being St. Peter’s Basilica in Vatican City and St. Thomas Cathedral Basilica, Chennai in India. Because of this, it has become a site of pilgrimage for Christians all over Europe dating from medieval times. The journey became an important rite of passage for all true believers and although pilgrims set out from many diverging points, they tended to come together along common routes. This journey has become known as the Way of St. James. Hundreds of thousands (over 300,000 in 2017) of Christian pilgrims and many others set out each year from their homes, or from popular starting points across Europe, to make their way to Santiago de Compostela and only to Rome do more pilgrims travel in a year.

I’ve visited the cathedral several times during my visits to see our family in Spain through the years and am grateful that I was able to make a family trip to see my family in Galicia with my wife back in 2011 – the only trip she would make there. This time was a bit different, though. I secretly arrived in Santiago on December 22nd and spent the next two days there on my own with my daughter – not accompanied by a family member(s) as was usually the case. With that freedom, I was able to see the Old City with new eyes (and armed with the Fujifilm X-T3 which I had rented for this trip).

So, if you haven’t yet seen my photographs of Santiago de Compostela’s Old Town, start THERE then come back here and check out the photographs from the inside and outside of this hallowed cathedral… 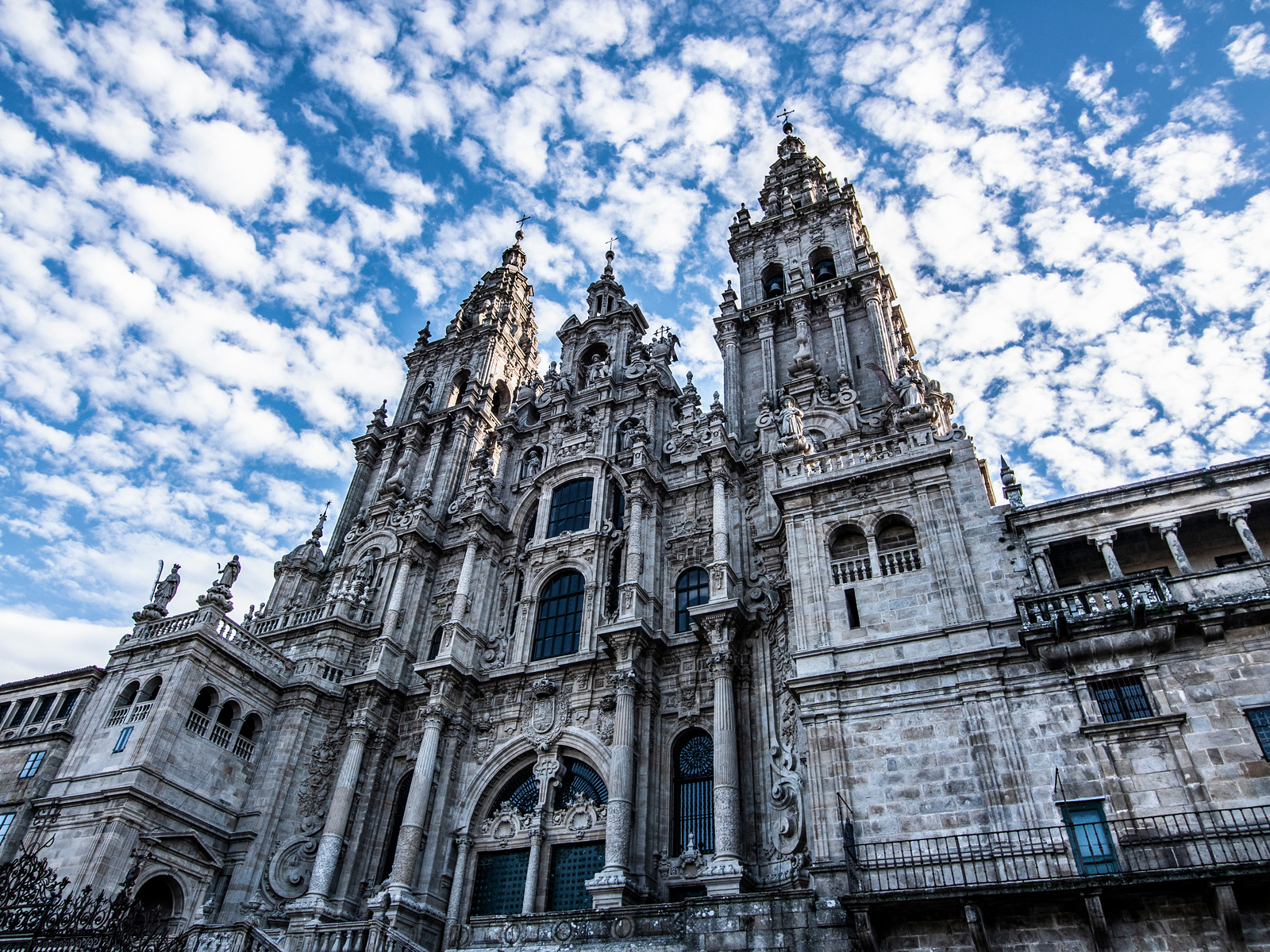 The Obradoiro square in front of the façade alludes to the workshop (obradoiro, in Galician) of stonemasons who worked on the square during the construction of the cathedral. The Baroque spires has come to symbolize Compostela… 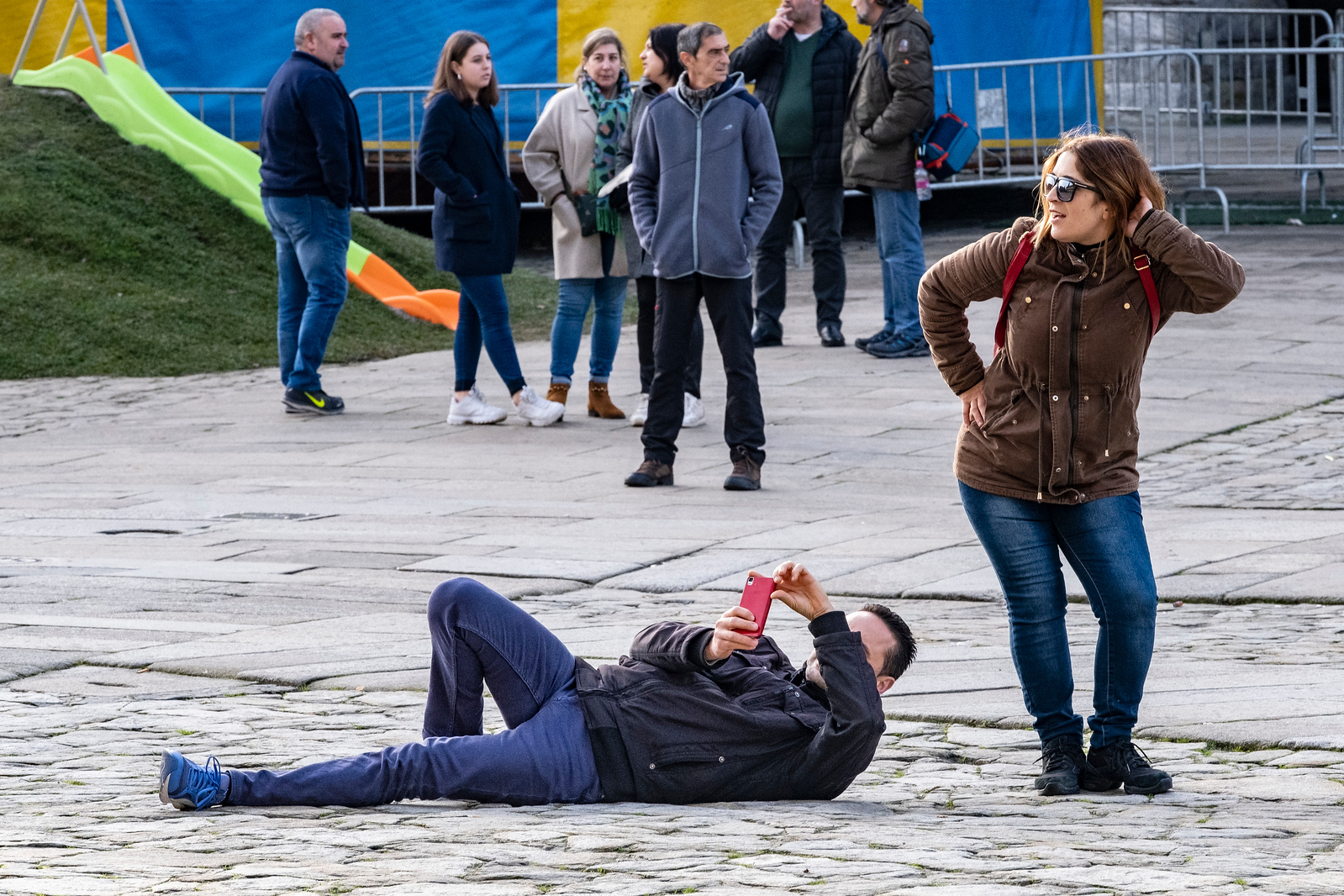 If you want to take a photograph of the towering cathedral, you need to give yourself plenty of space or get down really low… 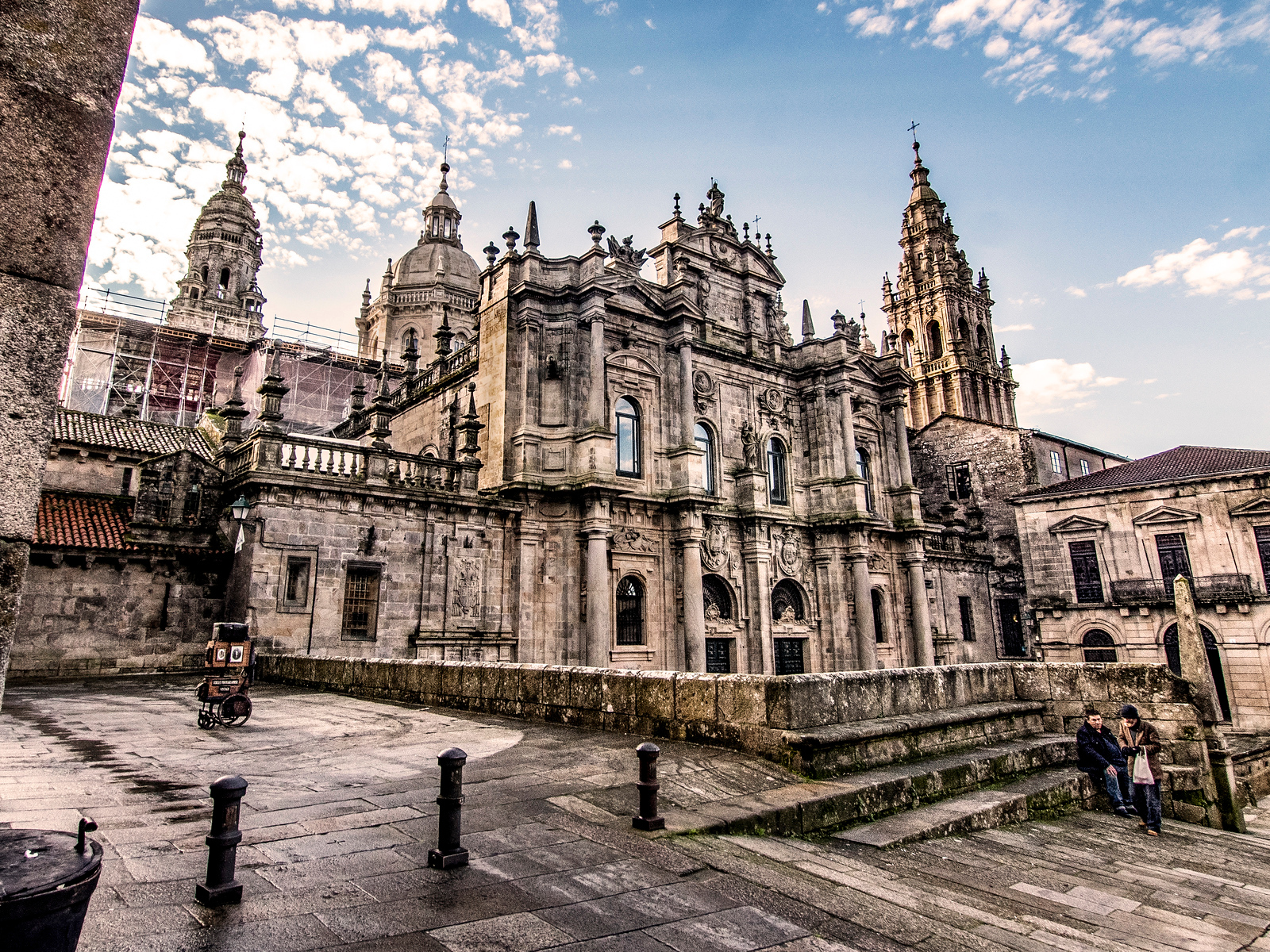 The façade “da Acibecharía” (Galician name derived from the jet gemstone) was built in 1122 by Bernardo, treasurer of the temple, and redesigned in Baroque style by Galician master builder Lucas Ferro Caaveiro and finished by architects Domingo Lois Monteagudo and Clemente Fernández Sarela in the neoclassical style in 1769 (I wanted to go really wide so I shot this one with my Lumix GH4 using the Tokina 11-16mm f/2.8 with the Metabones Canon EF Lens to Micro Four Thirds T Speed Booster ULTRA adapter) 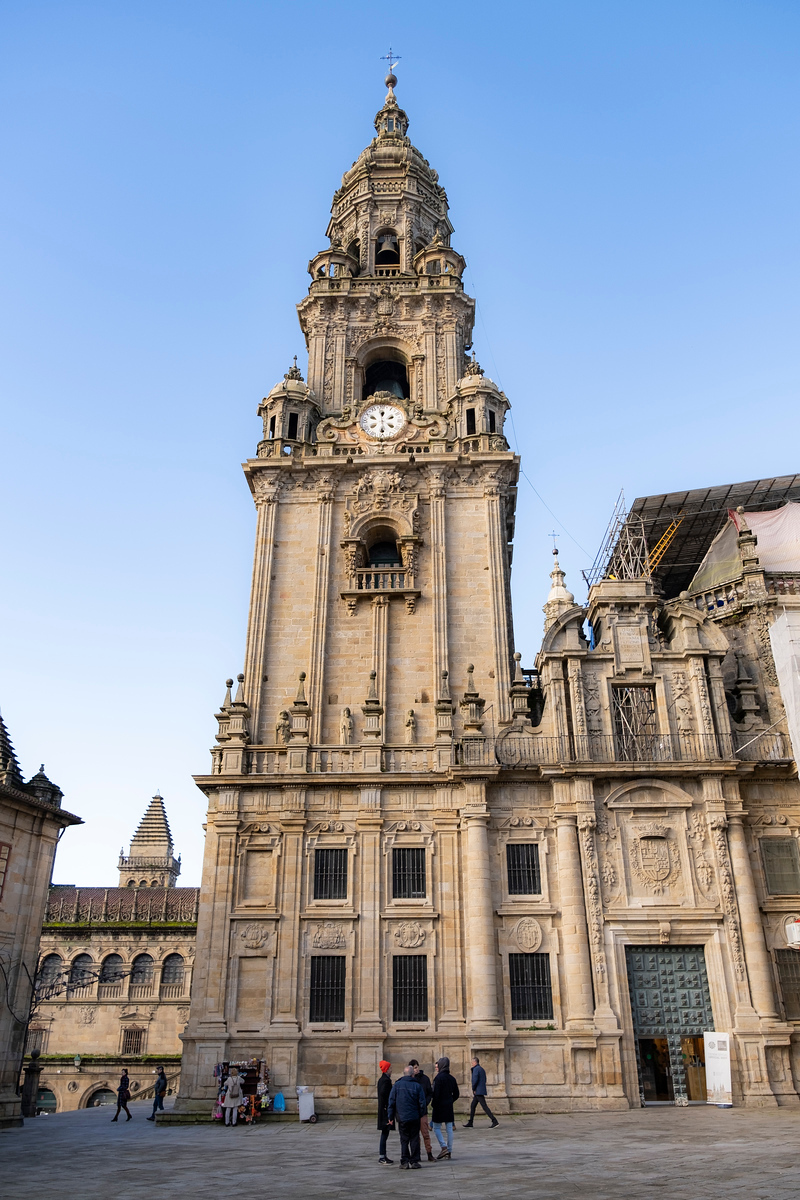 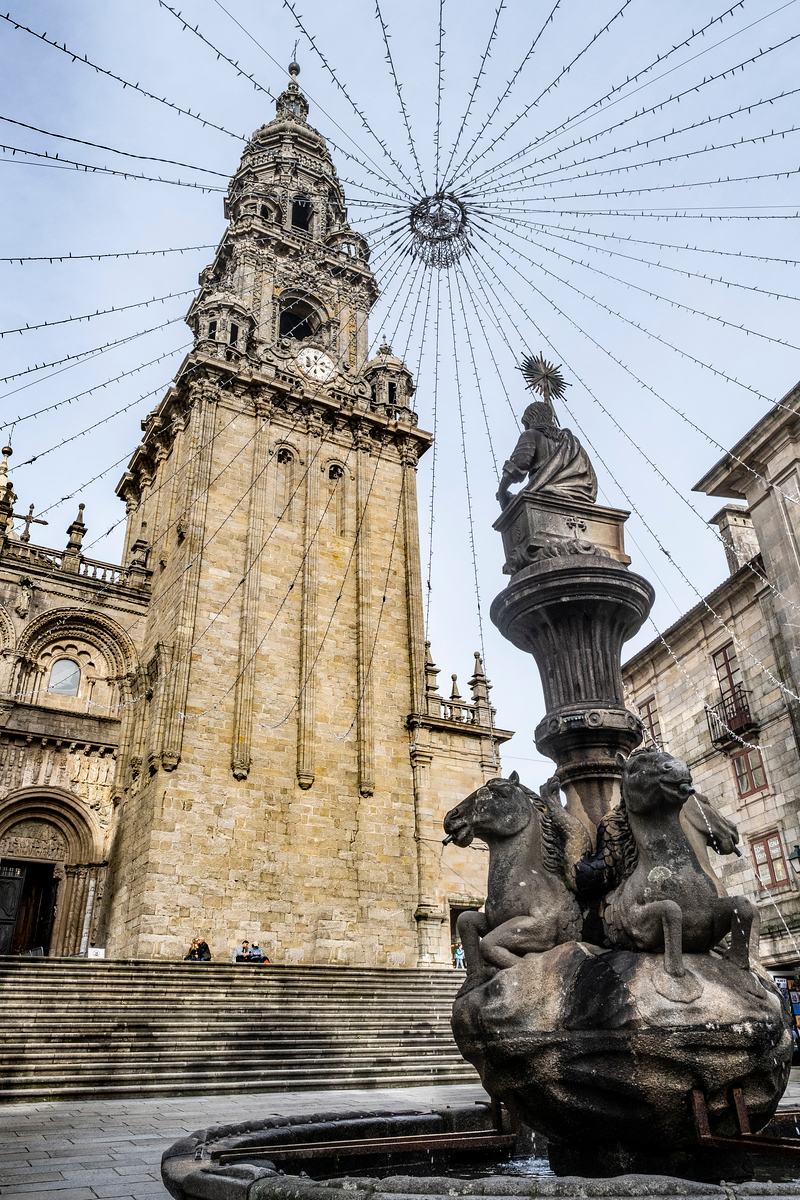 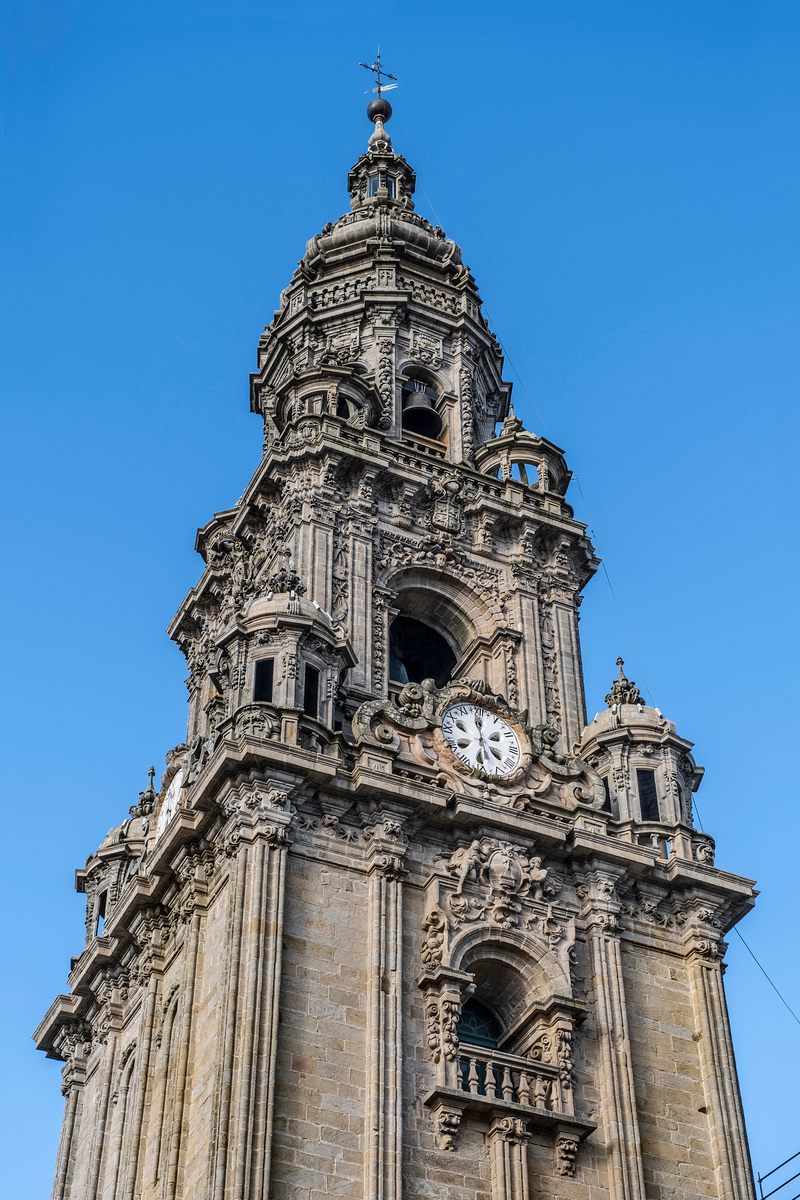 The Clock Tower, also called Torre da Trindade or Berenguela, is at the intersection of the Pratarías square and the Quintana square. Traditionally, construction was thought to begin in 1316 as a defense tower. In 1833, a clock was placed on each side of the tower by Andrés Antelo, famous artist and watchmaker of his time. 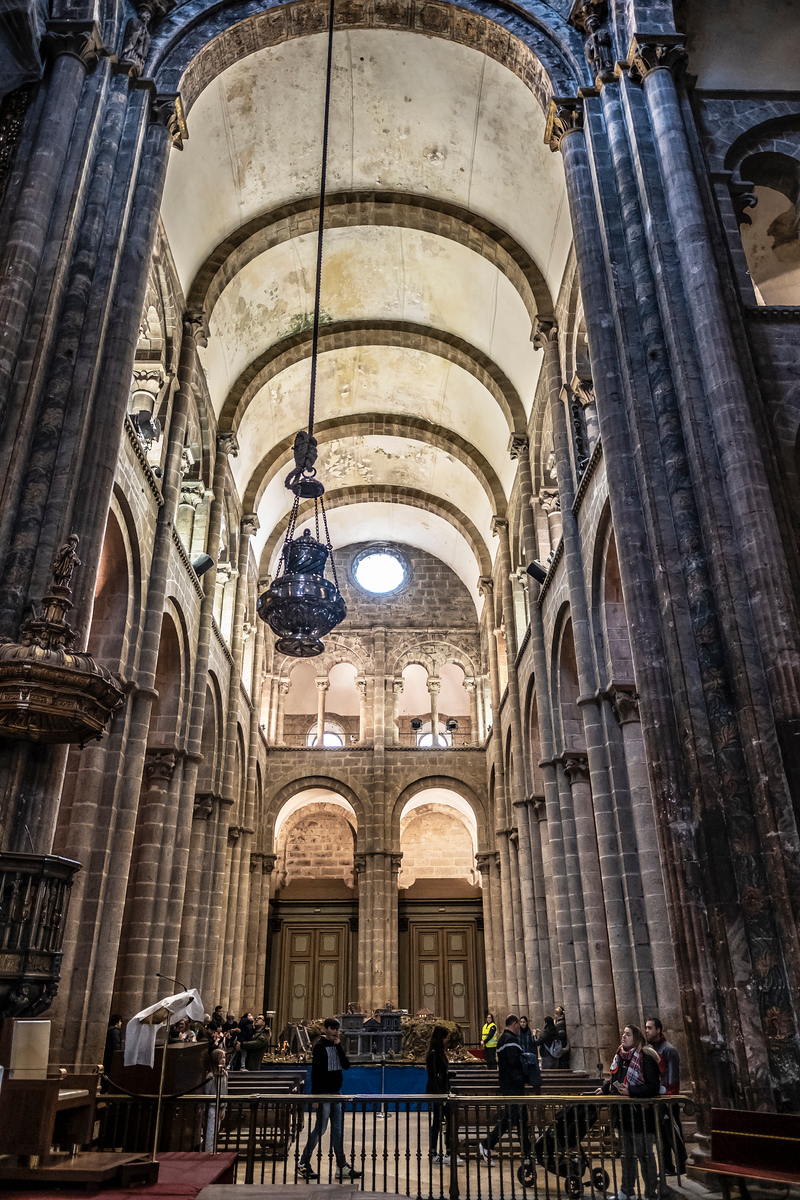 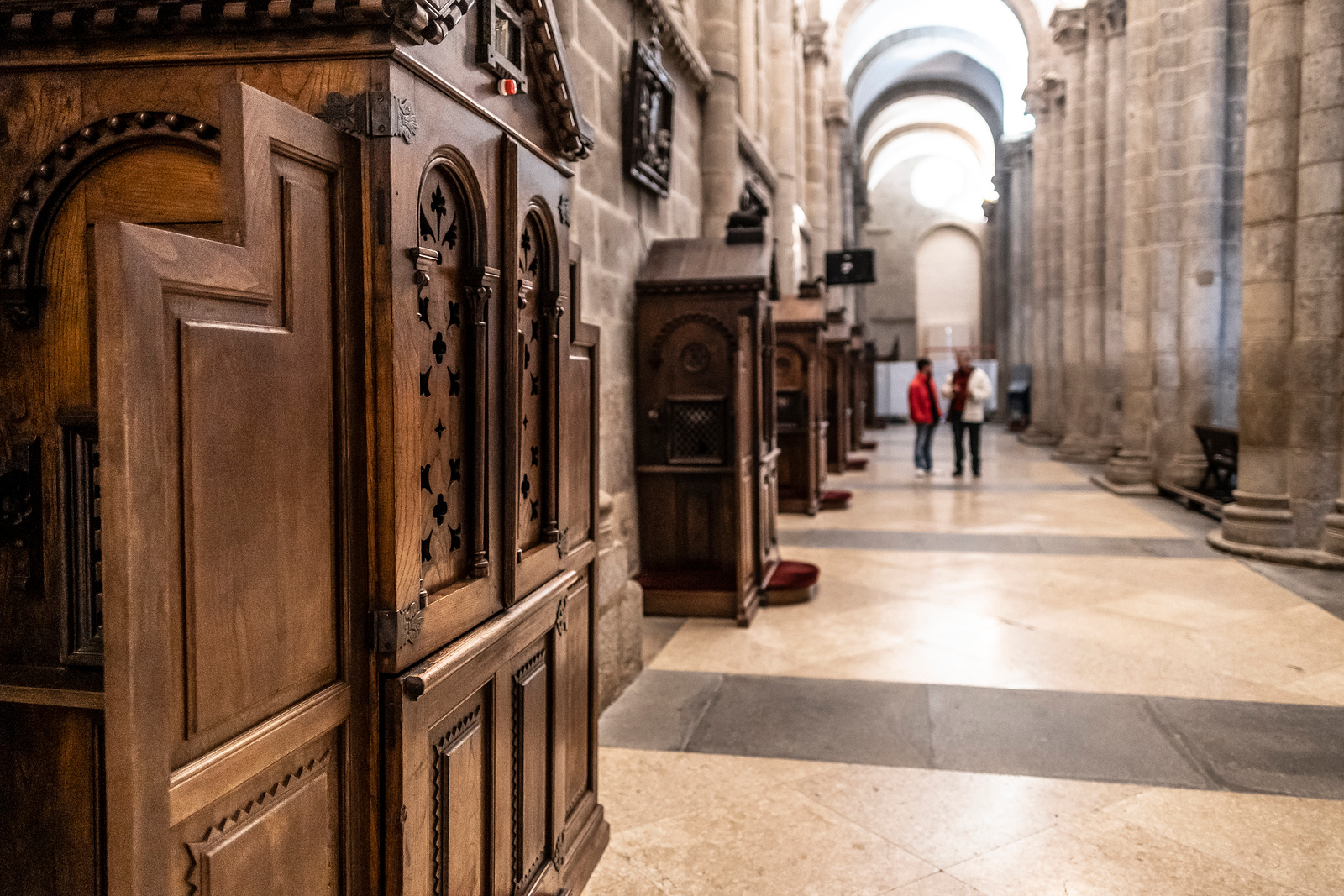 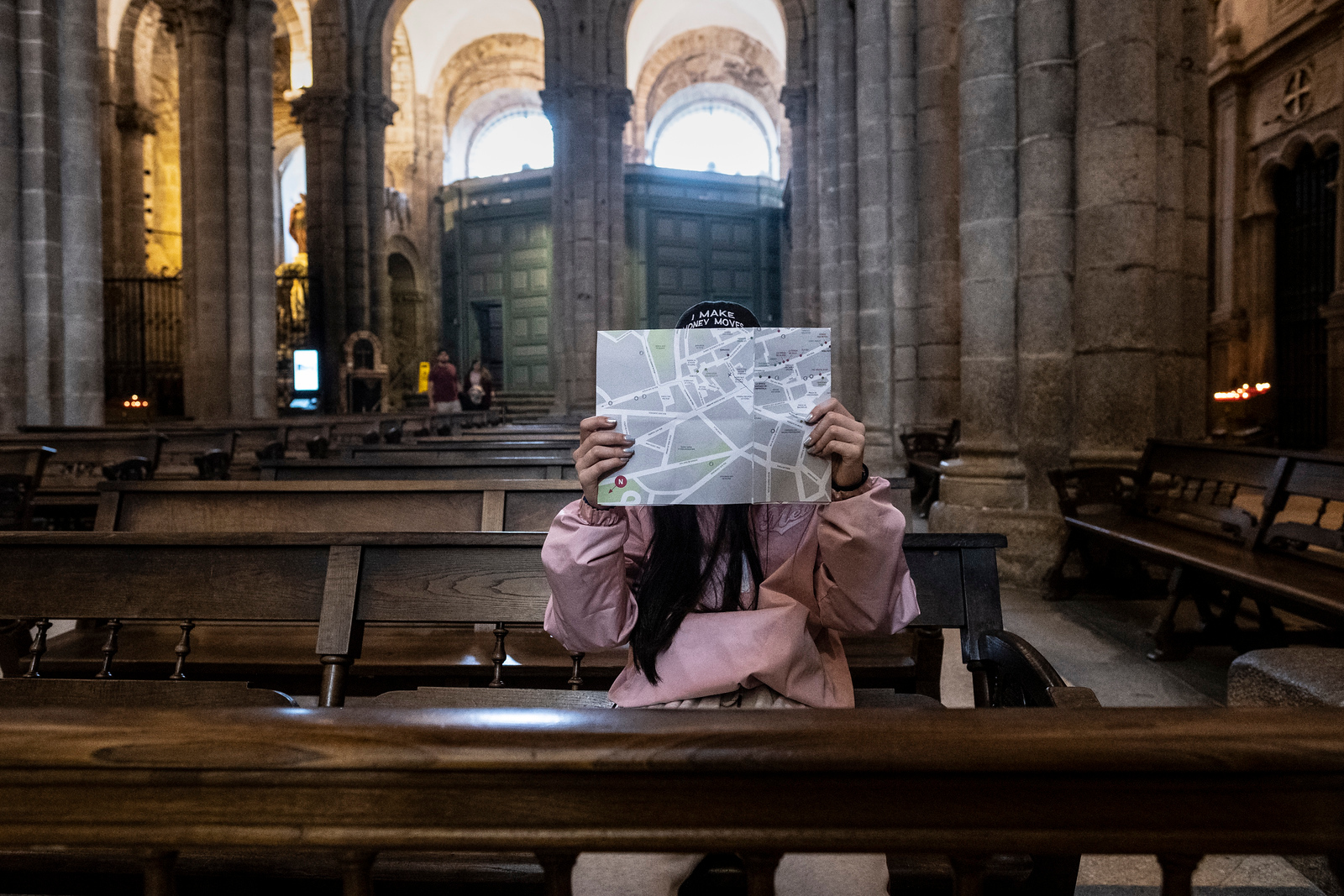 Being inside the cathedral for the very first time on my own was a unique experience (I’d been in there a handful of times before with various family members from Galicia), one that made me feel less inclined to snap photographs and more inclined to just walk around and take in the interior with “new eyes”. I did manage to snap a few photographs, however, including my daughter shielding herself from my camera with our tourist map… 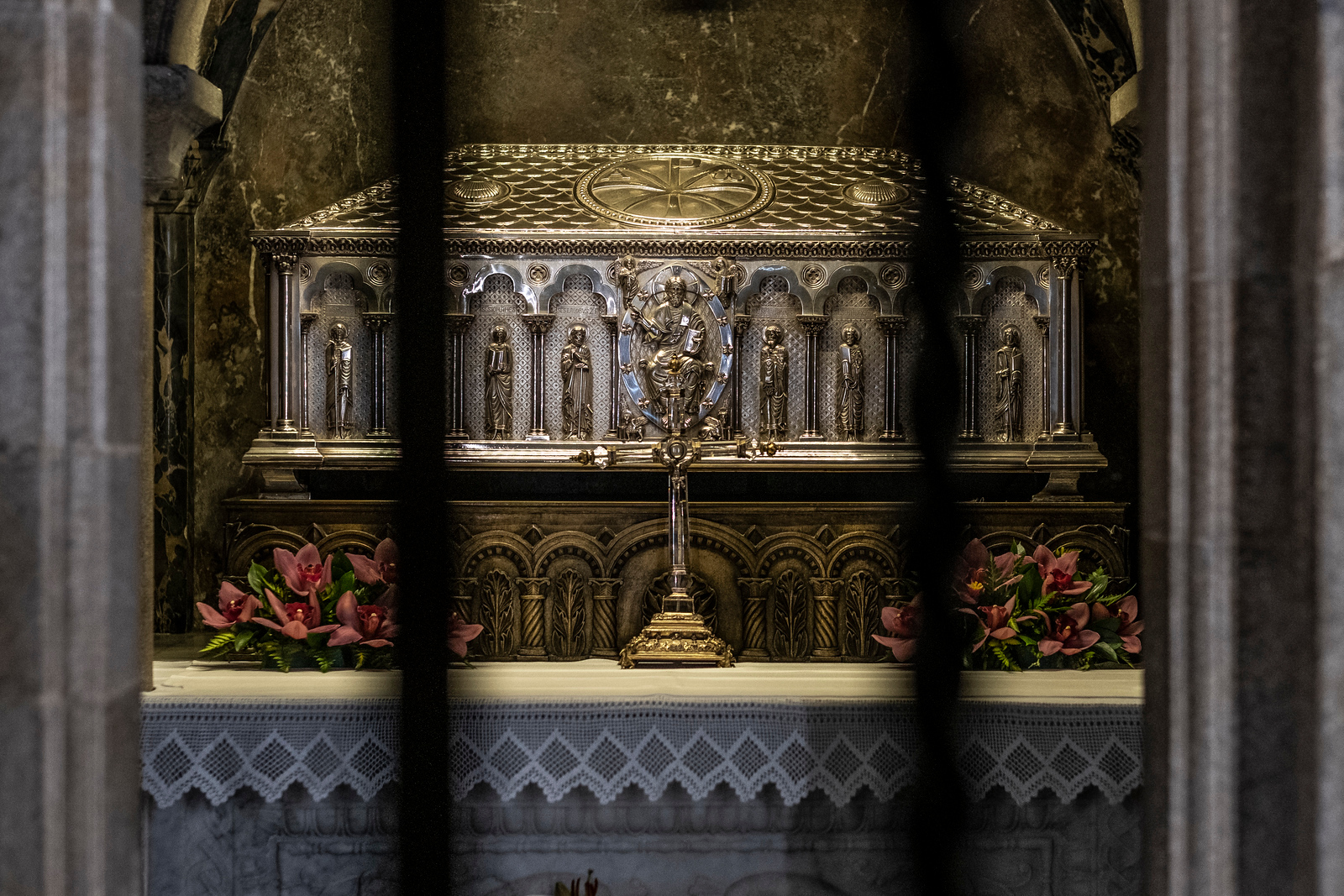 The crypt, below the main altar, houses the relics of Saint James and two of his disciples: Saint Theodorus and Saint Athanasius. The silver reliquary (by José Losada, 1886) was put in the crypt at the end of the 19th century, after authentication of the relics by Pope Leo XIII in 1884.

The “Botafumeiro”, created by the goldsmith José Losada in 1851, is a famous thurible found in the cathedral. Matter of fact, it’s the largest censer in the world, weighing over 170 pounds and measuring over five feet in height. It is normally on exhibition in the library of the cathedral, but during certain important religious holidays it is attached to the pulley mechanism, filled with over 80 pounds of charcoal and incense and pulled by eight red-robed “tiraboleiros” into a swinging motion almost to the roof of the transept, reaching speeds of almost 50mph and dispensing thick clouds of incense. Being that it was Christmas day, I was at the 11:30 mass (got there about an hour early to get into a good spot for my camera and I) and saw the Botafumeiro in action. 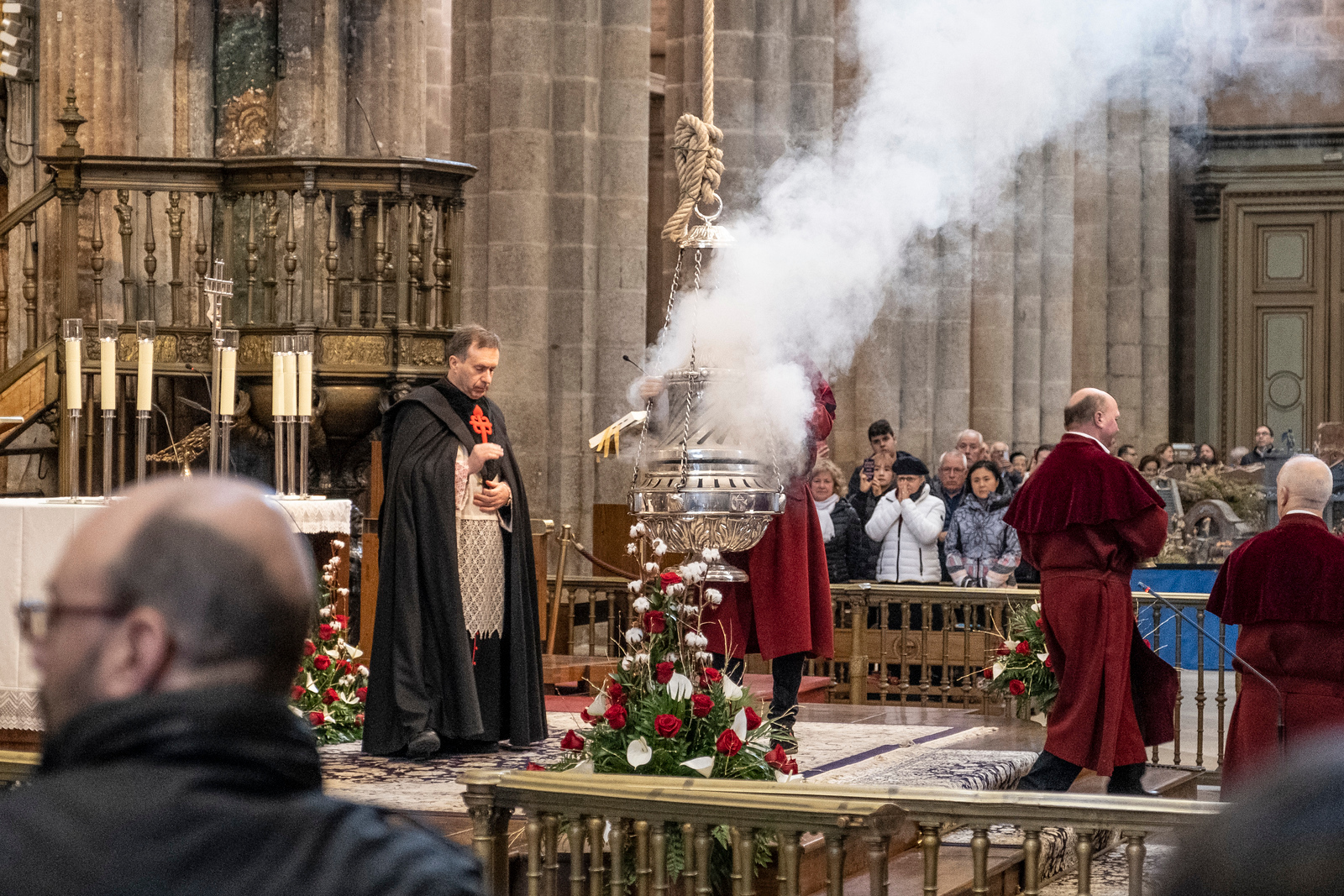 A note to the folks at the cathedral – you might want to hold off until the end of the mass to swing the Botafumeiro, which happened about 10 minutes after mass began. Place was SRO before the spectacle of the Botafumeiro but as soon as it was over, the place just about cleared out. Was pretty funny.

Our time in Santiago de Compostela was the highlight of our visit to Spain and the cherry on top of a trip that was originally planned as an escape from a home that would be without my wife Madelyn on her favorite holiday, Christmas. What it turned out to be was a remarkable bonding experience with my daughter and the realization that we still had each other; and so many fond memories of Madelyn to keep us warm when our hearts got cold. It was something we cling to as we move forward with our lives – one day at a time.

Hope you enjoyed the series of photographs. If you’re just joining us, my daughter and I decided to embark on an eight-city driving tour of Spain that started in Madrid and commenced south to the charming city of Córdoba (check out the photographs HERE and images from the stunning Mosque-Cathedral HERE), then continued further south to Gibraltar, back northwest a bit to the coastal city of Cádiz and Jerez de la Frontera (check out the photographs HERE) and then back up north to the beautiful city of Seville (check out the first series of photographs HERE). In Seville, we visited the charming Plaza de España as well as the magnificent Seville Cathedral and the Royal Alcázar, both UNESO World Heritage Sites. From Seville, we drove up to the lovely University city of Salamanca and then further northwest to the final city on our trip Santiago de Compostela and a visit to the region’s second most visited location (after the cathedral, of course), the Mercado de Abastos. So consider yourself caught up.

Written By DanPerezPhotography On April 17, 2019